Lawrence has been in touch again. You may remember him from his HO helix post.

Well, I have to say, I do love his stuff – you can tell he has a lot fo fun with his layout:

Another Update. As a member of the SCA (Society for Creative Anachronism = recreation of the middle ages) I was thrilled when I found out that the Renaissance Faire was coming to town.

There are companies that are starting to make Ren Faire stuff but not on the market yet. So, it is time to ad-lib from what I have see by going to the Ren Faire myself.

The first picture is the clearing of the field and setting the boundary. The second picture shows the walls in place, made from food scurs. The shields are pictures from the web on thin styrene. Most of the devices I recognize from registered devices from Baronies, Shires, and Cantons in the SCA. The third picture shows the entertainers arriving and a food court set up for them. Now we see the full Ren Faire set up for the customers. With some of the entertainers practicing their art (dancing and jousting). 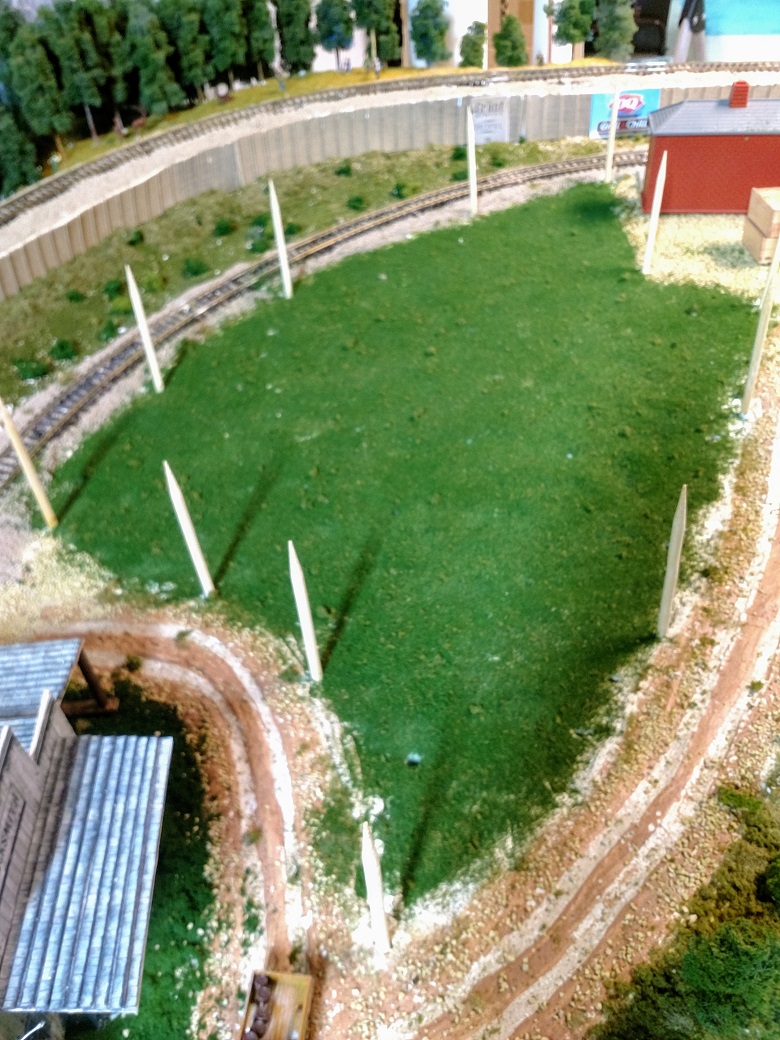 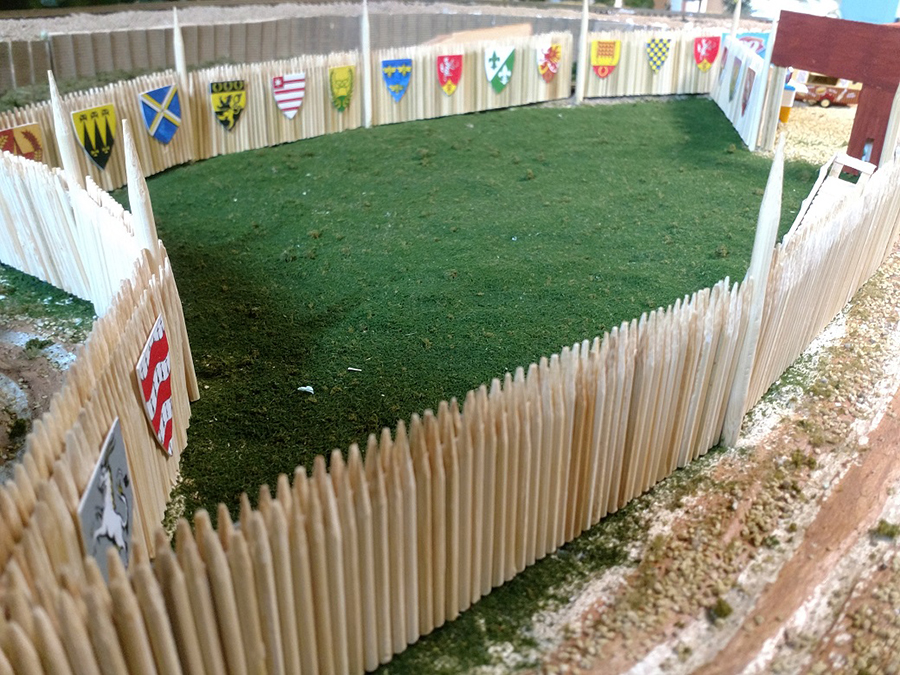 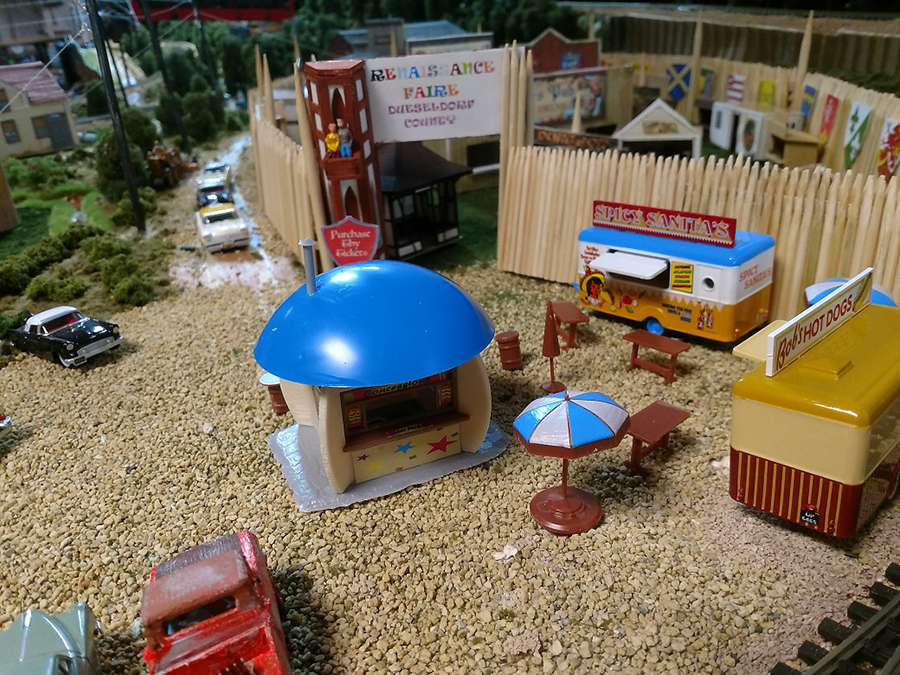 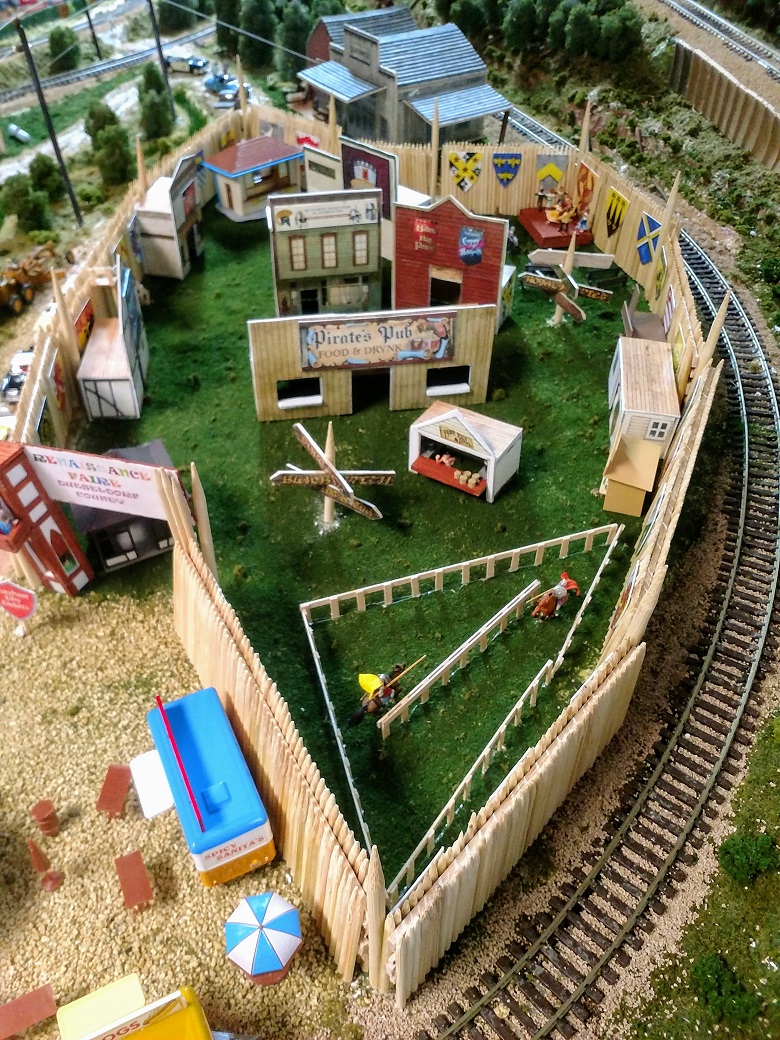 The Ren Faire is officially OPEN. Customers are arriving with the police helping to direct traffic.

The Ferrier shop in the picture has been shut down and the Ferrier is now available for the jousting horses as needed.

Picture number 6 shows customers arriving and starting to enjoy the festivities. But to get in they have to pay and get their hands stamped with an ink device. To allow them to leave and reenter the same day without paying again. The shack just inside the entrance checks for the hand stamps. 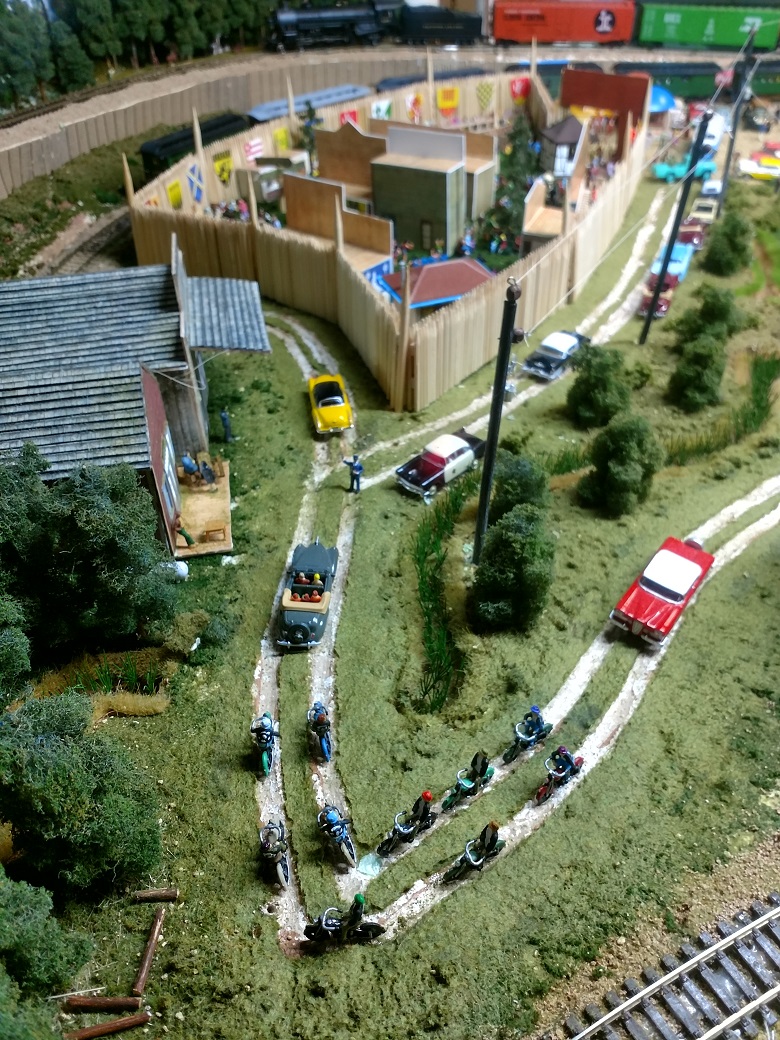 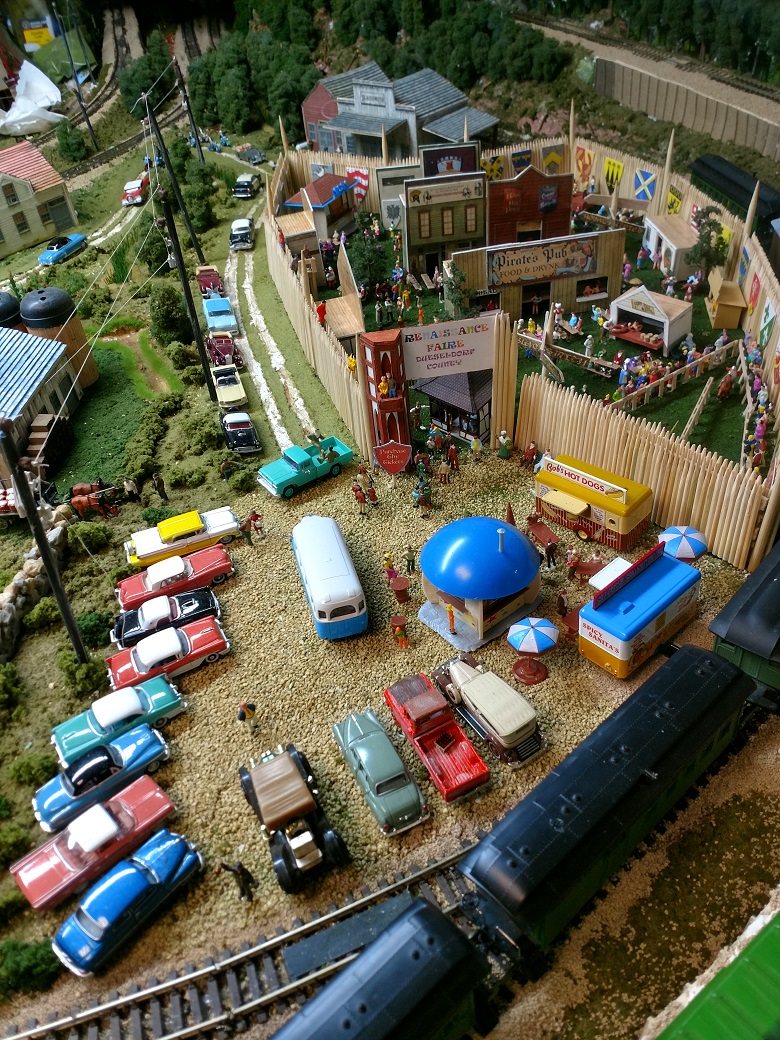 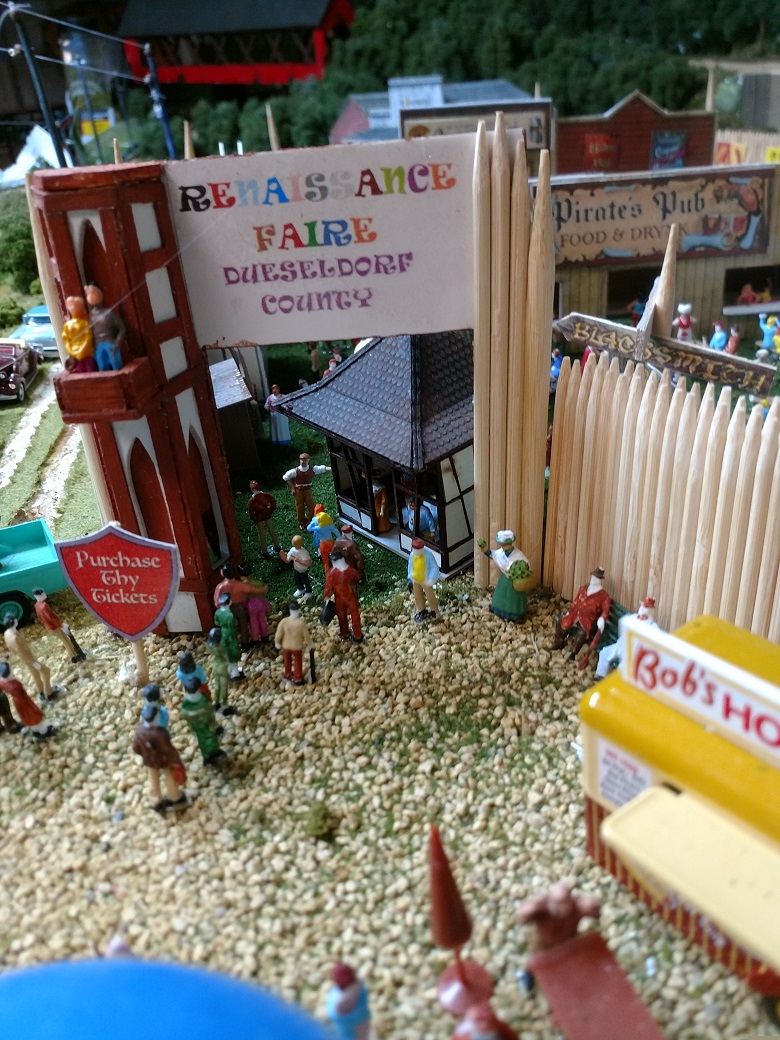 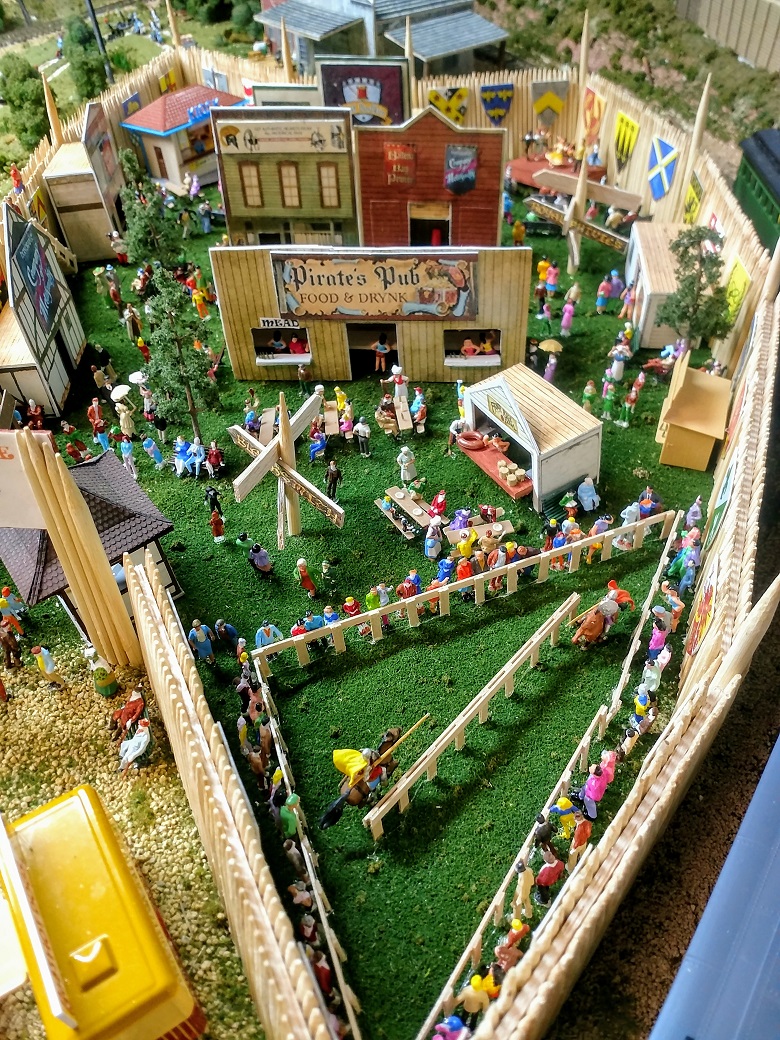 Now the fun begins. In the eighth picture people are seen to wander around in normal street clothes, Renaissance garb and even SCA (medieval) garb. The multiple attractions are the jousting, dancing, food, mead, and of course turkey wings. The next picture is a close up of the jousting. The jousting poles are actually balsa wood so that they shatter on impact with minimal damage. Then there is the general area for the food and mead. You can order at the counter or be served at a table. The kiosk in the rear of the picture sells the turkey wings. The last picture shows the dancers, usually to an Irish tune. 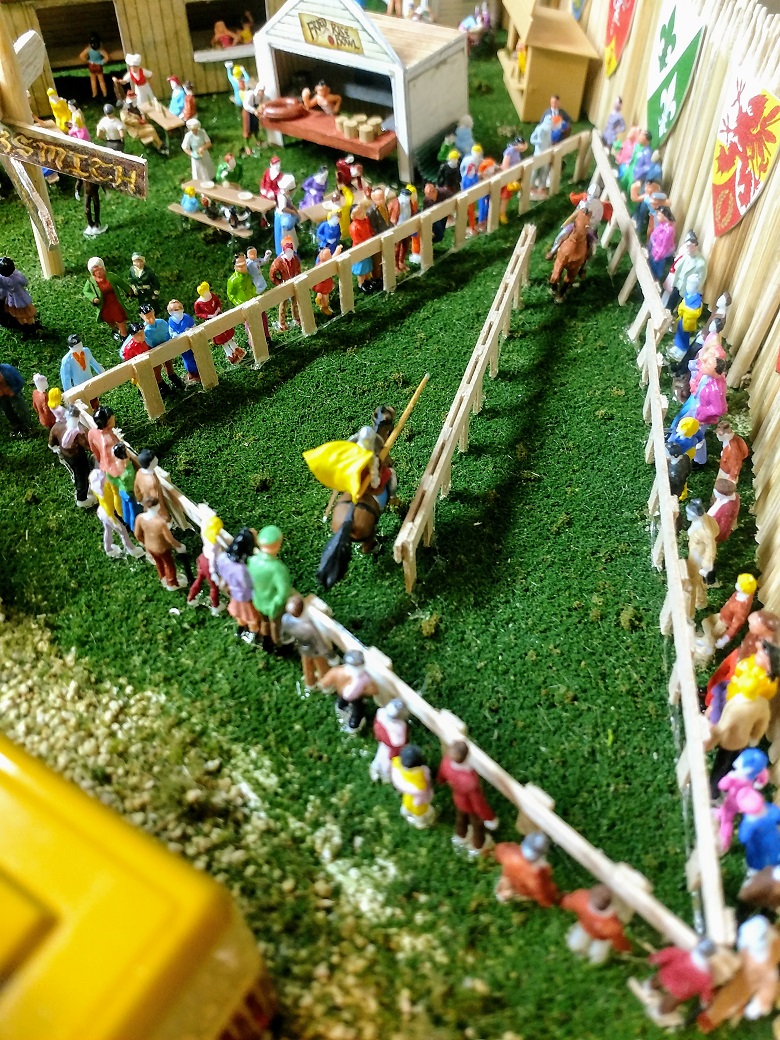 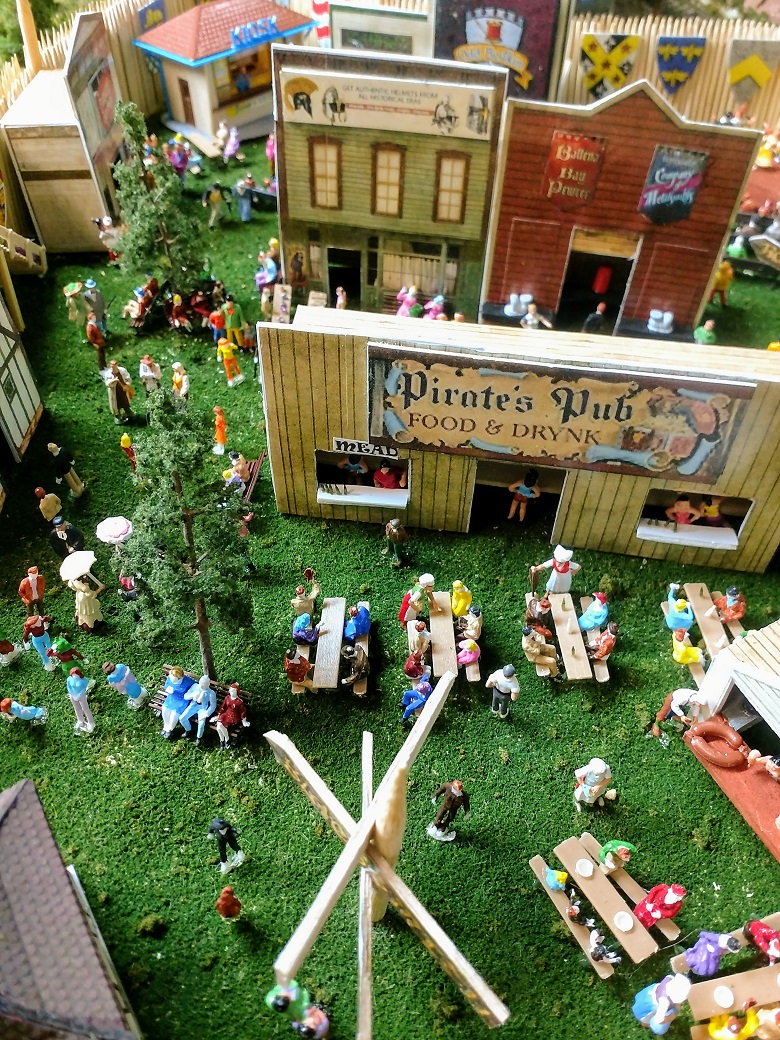 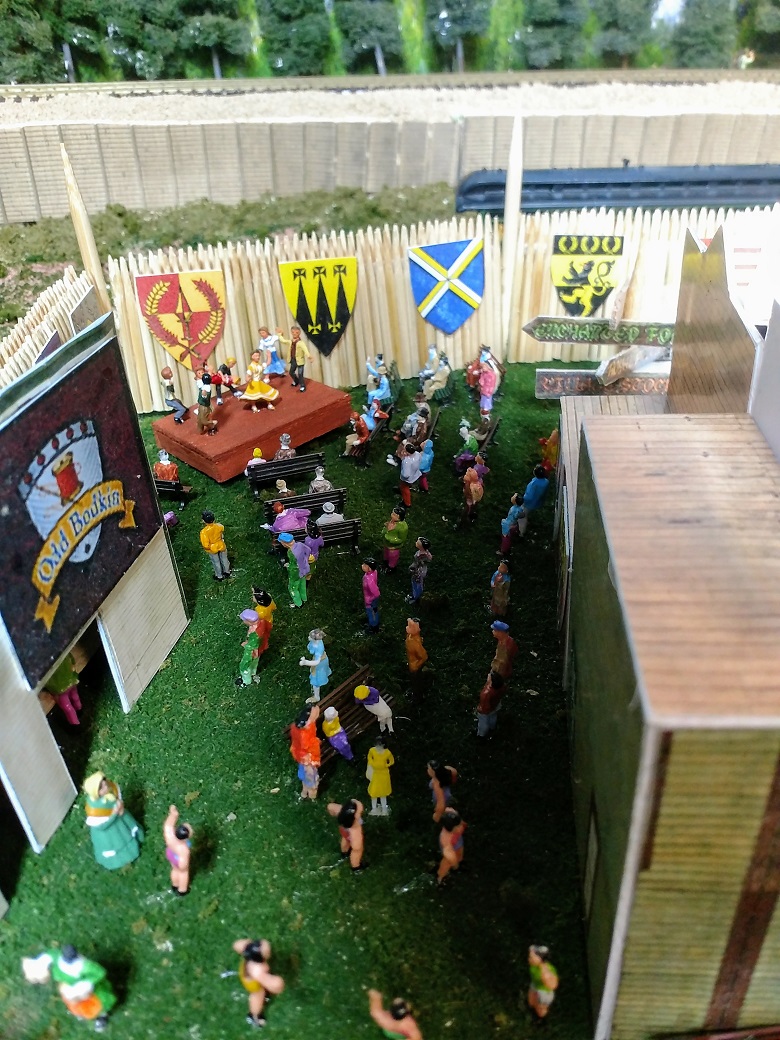 A huge thanks to Lawrence – I do love it when I see his name pop up in my inbox. Over the months he’s sent in quite a number of posts, and I hope he keeps them coming too.

And now on to Dangerous Dave. I know I post a lot of his stuff but it’s just that if I start watching something, and find myself watching all of it, I generally post it. I don’t know what it is about Dave’s layout, but it seems to get me everytime:

“Bit of fun running for the weekend Al, tried to name each one for those not knowing which type is which…

That’s a lot of locos Dave’s got there. Great to watch.

And please don’t forget the Beginner’s Guide if you want to get going on your own fab layout.