Greg’s been in touch with more model railroad planning ideas.

Well, when I say update, he seems to be having just as much fun planning his layout as building it.

“Well, as I was developing the switching area on the left side, I realized that I had one spur facing in each direction.

That meant there was no way for the steeple cab loco to get to the other side of the cars being spotted.

I had three choices: get rid of the switching altogether (Nah!), keep all the spurs facing in the same direction (maybe, but not a great idea) or build a runaround track.

Here is my first attempt. 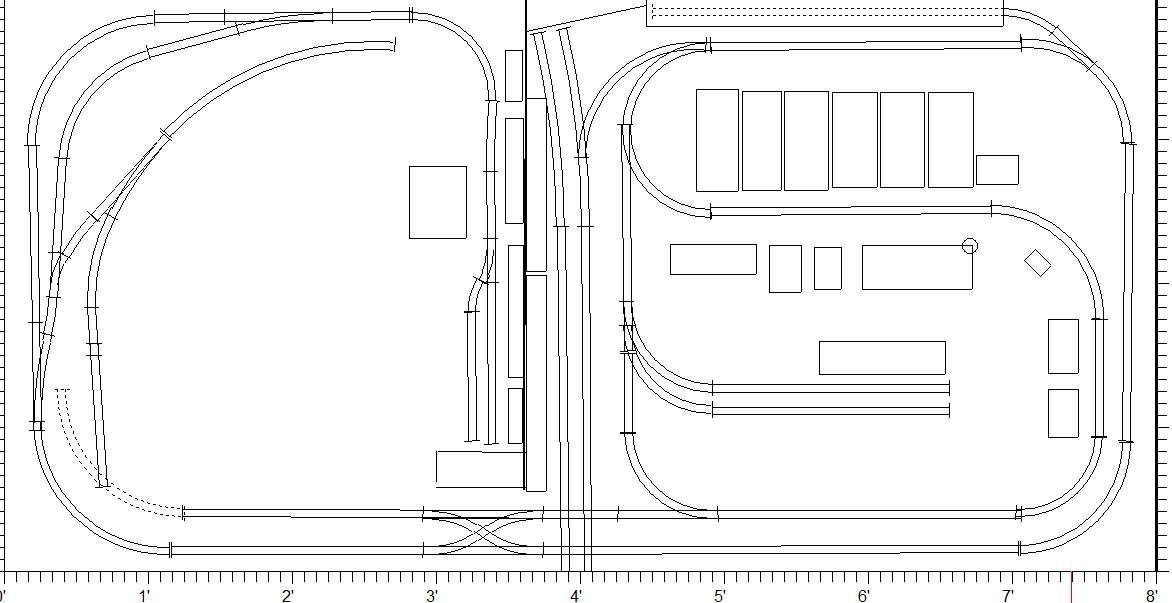 While this is doable, it is starting to infringe on the Waukegan area. So I put in some streets to help define the separate areas.

Putting in the streets gave me a better idea of how crowded it would be, so I eliminated one of the railroad interchange tracks. It was only there for scenic purposes anyway.

XTrkCad also allows me to add some buildings. They are just 2 dimensional, so you are looking down at the roofs. I drew the Main Street Station, City Classics 5 story buildings and Walther’s Merchants Row 2. They are all drawn to accurate dimensions on the Chicago side.

The runaround seemed to be causing some problems for me, so I tried a version with both sidings facing the same way. 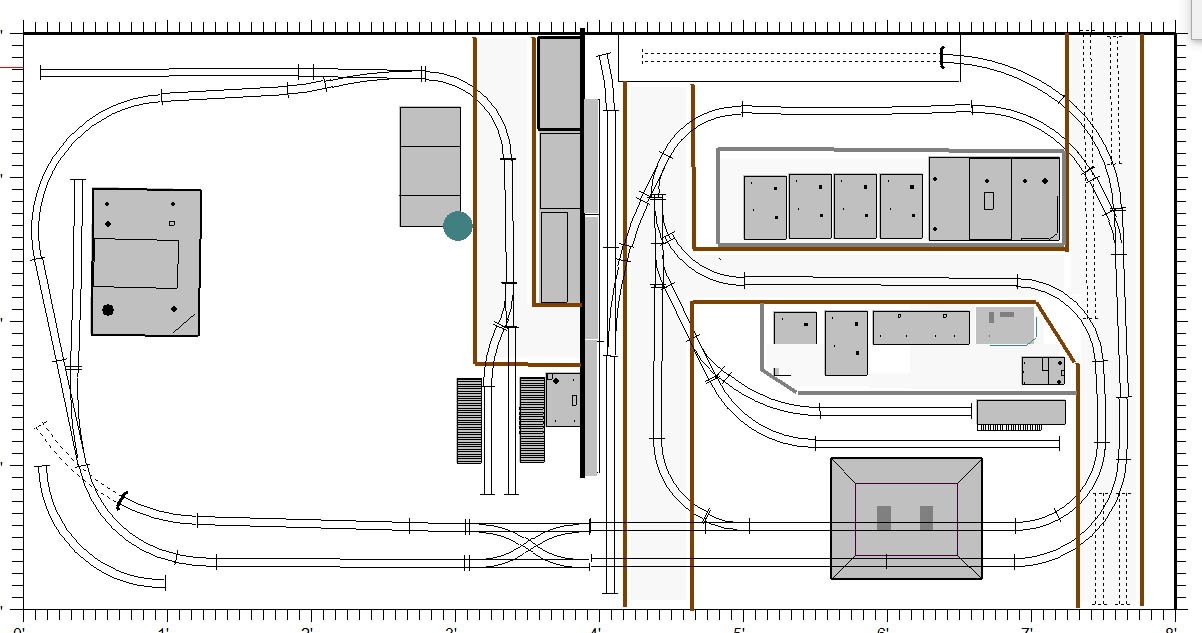 And you can’t have spurs without industries on them. So I did some research as to what industries were served by the North Shore.

I used northshoreline dot com and found a complete list of businesses served by the North Shore and tried to find those types of businesses.

I was looking through Walther’s catalogue and found the Grocery Distribution kit.

This kit has the perfect look for this area, so I drew it and put it in.

But that didn’t leave much room for an industry on the second spur. But Walter’s Interstate Oil doesn’t have a fixed footprint. It comes in three parts, so I started to work that in.

After looking at it for a couple of revisions, I realized that the Grocery Distributors is a huge building.

So in an effort to save space I will use Suydam’s Day and Night Hot Water Heater factory.

I can also cut off the last two sections of the building to help it fit even better. And I also already own the kit, so it saves money as well.

The pictures are not my building. I have an unbuilt kit.

So without showing you every tiny change I made, I fit in the runaround and Ravinia Park. 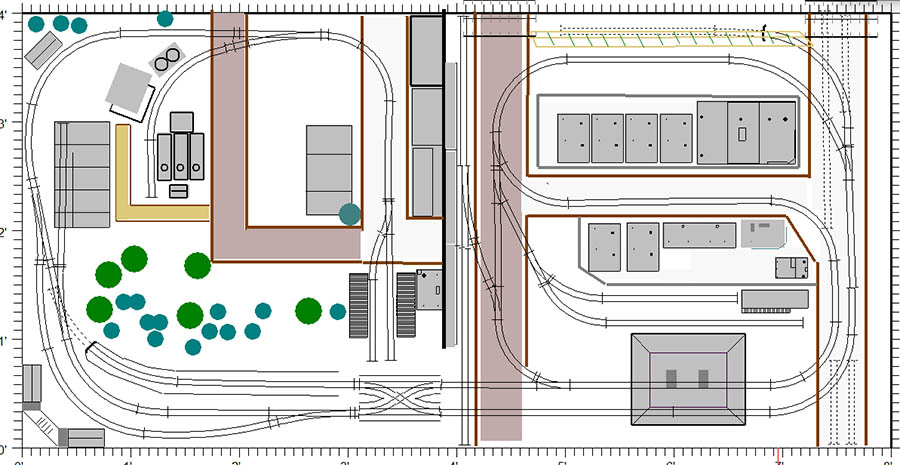 I planted a few trees, added a whistle stop in the upper left hand corner.

As I was looking through Walther’s catalogue I came across their Urban Embankments. These things just shout “Chicago!” So sorry Al, your flats (which I have already paid for) are being replaced.

Also, being raised higher than the rest of the scene, it should add visual interest.

And if I put a passenger train on top instead of a freight train, I have one more stop for the streetcar to make.

I’m just not sure yet, whether they will be single or double track. The street level track will pass into the opening and become hidden.

I’ll probably wait until I start planning the trackage full size before I commit to the width.


And now on to Peter who is making good use of his retirement:

“I have been enjoying your posts for a while and decided it was time for me share my efforts with you.

I rekindled my interest in railways when I retired 5 years ago and having a reasonable space in the garage dug out all my old models from 50 years ago and bought some new track.

Needless to say I still have lots to do but here are a few photos. 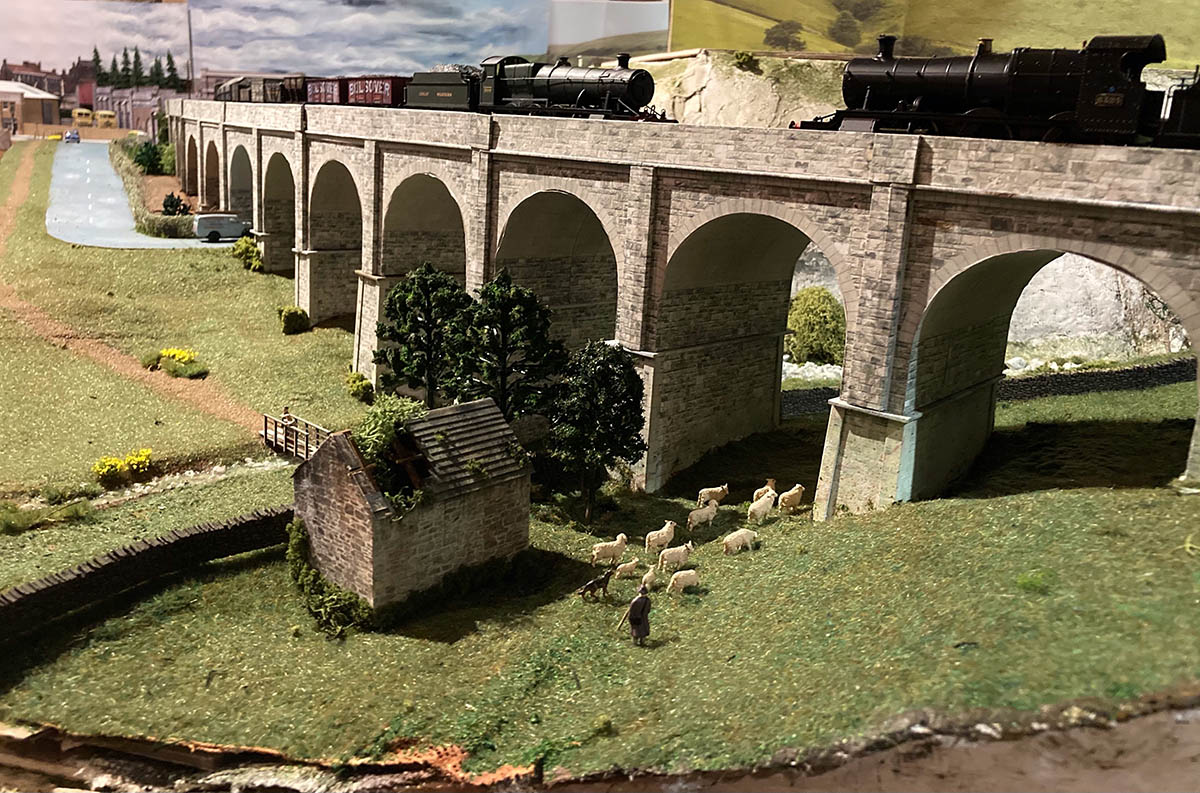 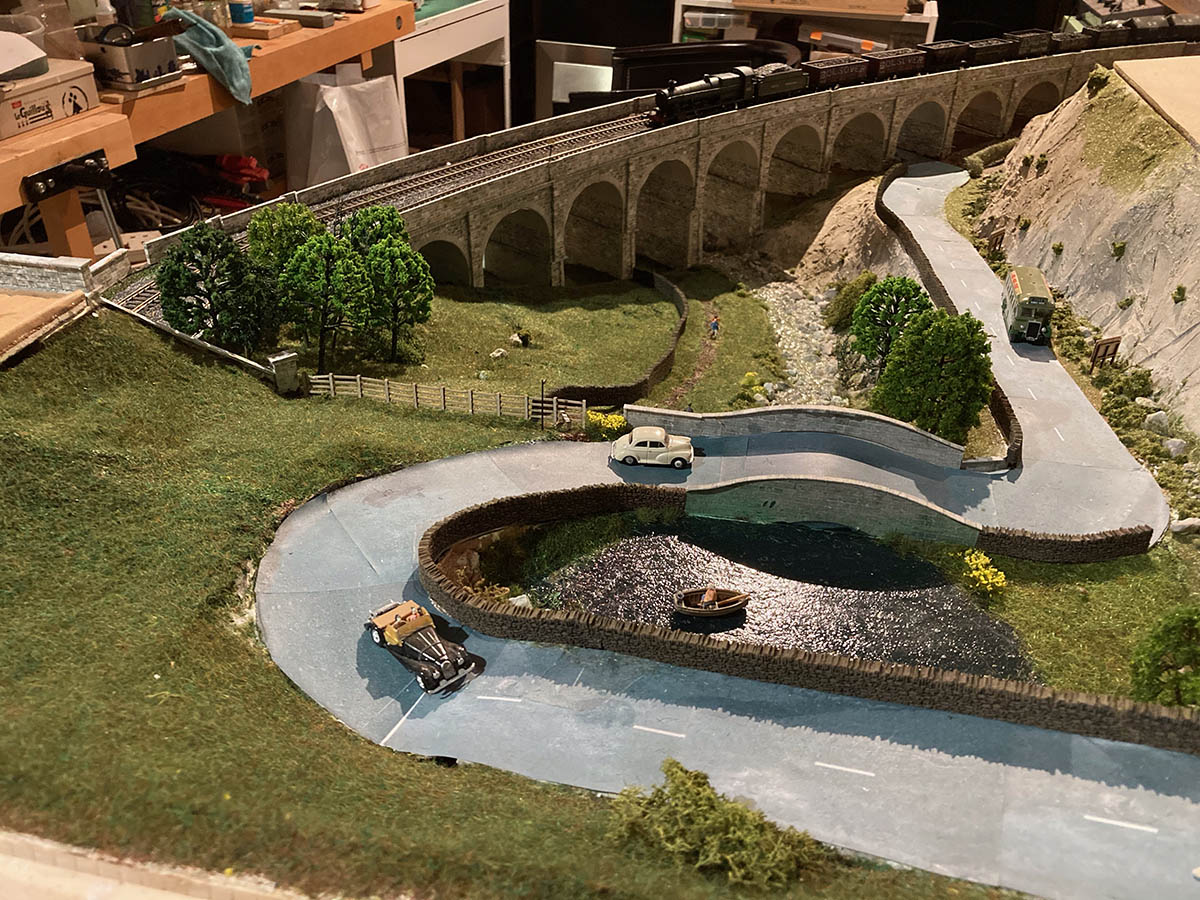 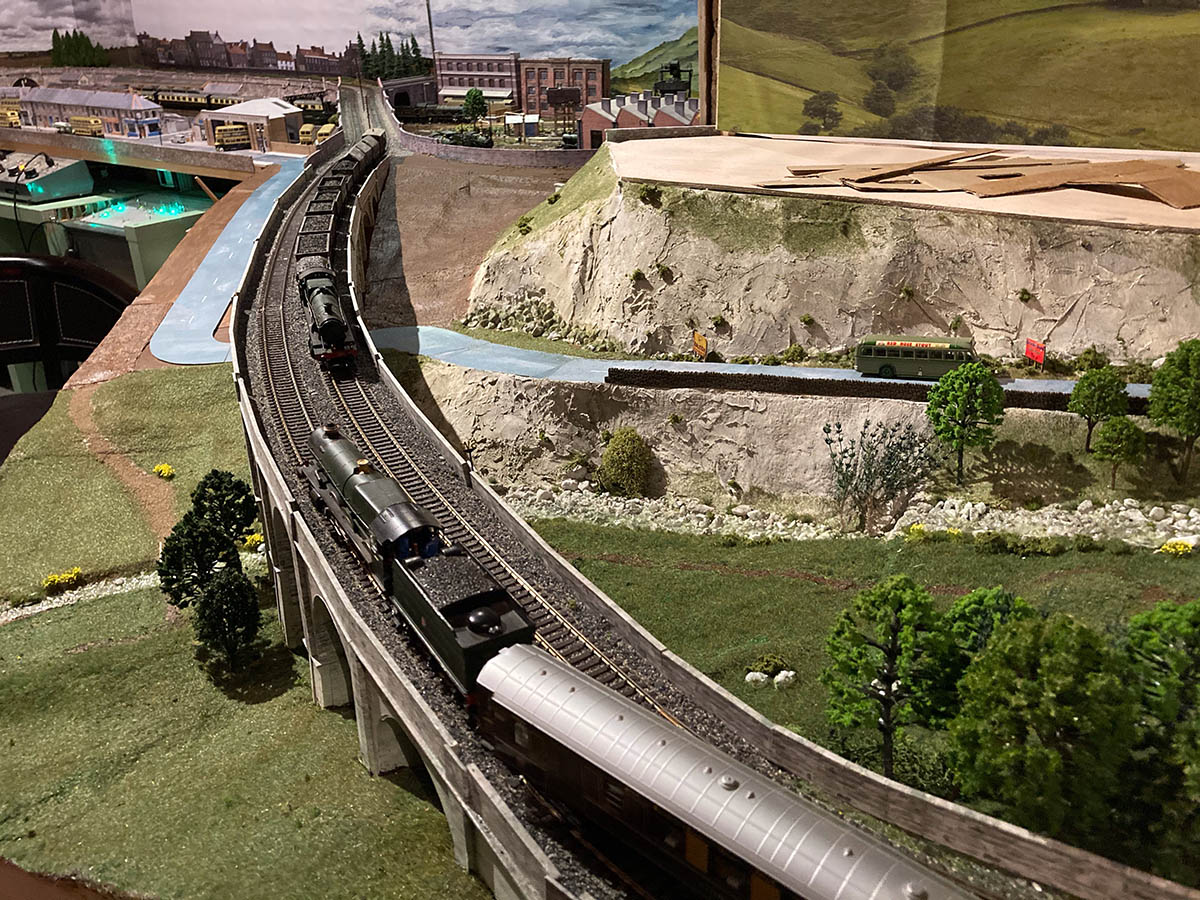 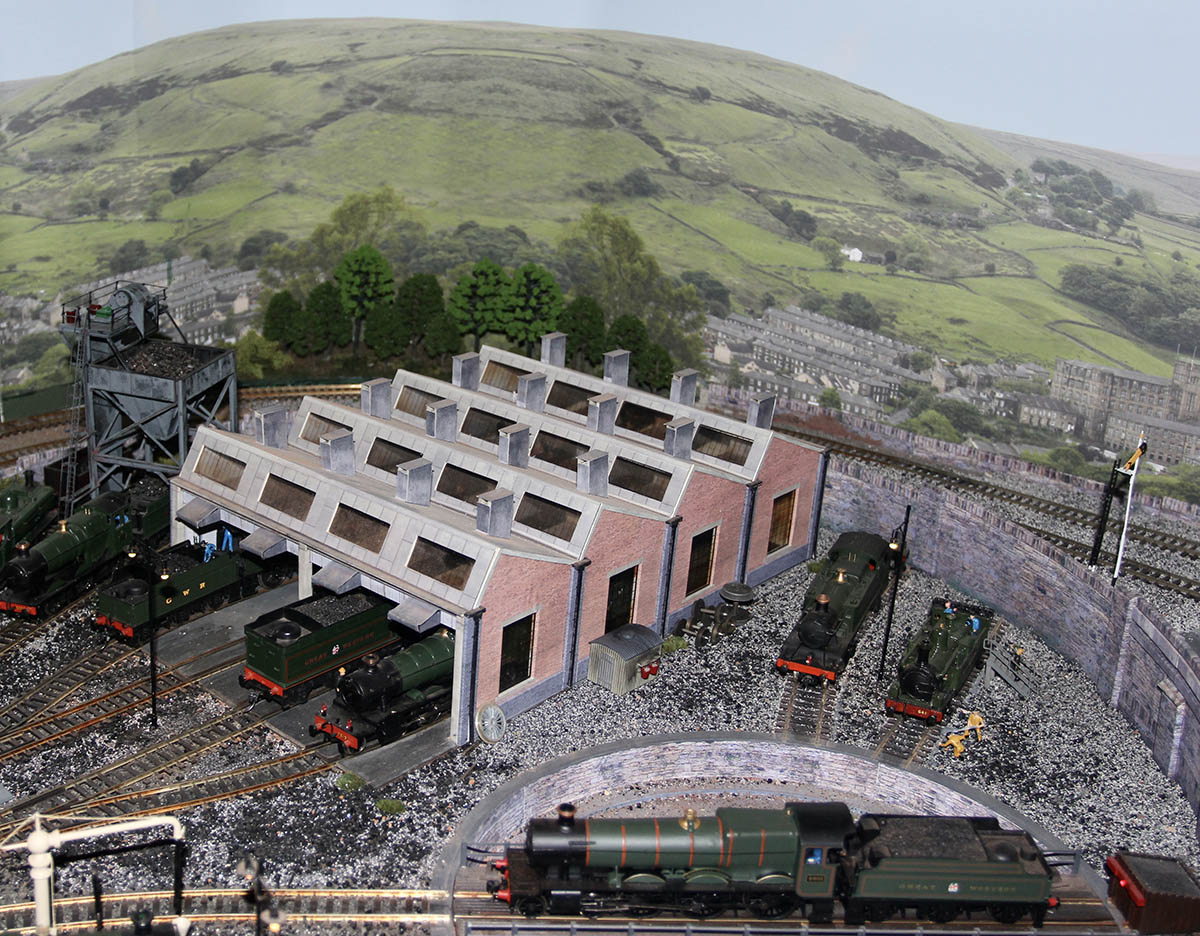 He’s never a man of many words – I think it’s a language barrier, but what a layout:

A big thanks to Greg for sharing his model railroad planning ideas. Some folk just like to jump in, others like to plan. Both are fun.

And don’t forget the Beginner’s Guide if you want to get planning, and get going.