I made this model for my sons last year. It is my interpretation of Tracey Island from the Thunderbirds which I made from about $90 of materials, and 3 months of my time.

I included LEDs and a rechargeable battery pack, which lasts 9 days of charge, and cost less than $15.

Planning is the key, do concept drawings, details and elevations to plan it out.

Then do a mockup of all the foam bits to make sure they will all fit together before gluing.

I use polystyrene foam as the main building material. It’s light, cheap, strong compressive strength and you can use PVA glue and acrylic paints without dissolving it.

I hope this helps.

I’m doing an 8’ x 6’ train model for them next with 3 loops, tunnels, bridges, elevated trestles, a boat harbour and a mountain peak. 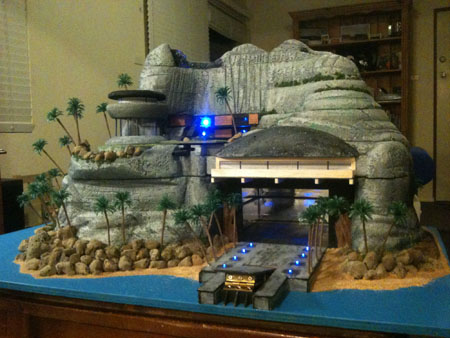 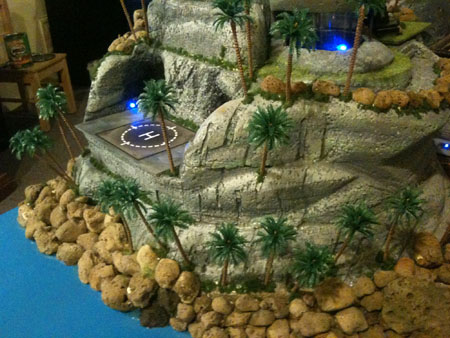 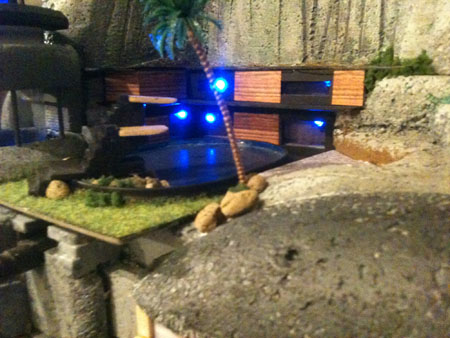 “Something for people without a dedicated Railway Room. And as a change from recent articles on here, this is about Layout rather than scenery. My priorities are:

Get as much track as possible into the available space.

Re-use as much as possible; this means 50yr-old rolling stock from my Hornby 3-rail days, and old timber “that’ll come in useful sometime” except this actually did.

I’ve identified redundant space near eye-level in my 6ft x 2ft walk-in wardrobe: with sloping walls, which my head hits before my shoulders do, the space is unused.

I also realised the following:

From my train-spotting days at GWR’s Acton Goods Yard, I actually like shunting.
Small engines improve operability in a confined space.
With DCC, I could run multiple engines independently on the short lengths of track.
No circuit is required (or possible at 00-guage in 2ft wide!).

Hence the decision to build a 6-siding track, as below (this based on standard Hornby curves, flexi-track was used in practice):

Further maximising my track in the limited available space, I added some “dummy” sidings (adjacent but unconnected, just by cutting flexi-track on an angle) on which I placed my old Bristol Castle and steel-wheeled trucks as “scenery”. The track had to be built in two halves to get it into the wardrobe; the pieces are as shown below. [Inset shows how the track has to run clear of the sloping wall.] Note that, for added immediacy, the track runs along the edge of the base-board where possible. 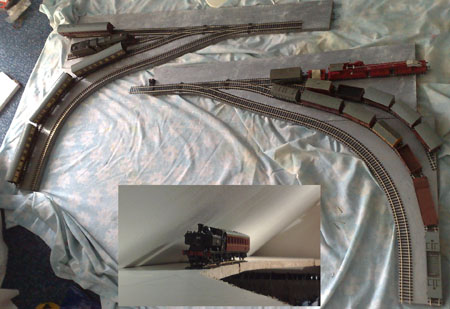 Having no space between tracks for signals, huts etc, my only scenic options were as backdrop. Inspired by the Acton Goods Yard of my childhood, I photo-shopped views from Google Street-View such that my sidings to the left represent the main-line from Paddington, and those to the right the Acton Goods Yard itself (now greatly reduced from its heyday).

The finishing touch was to construct a backdrop panorama between the two siding sets: I decided to photo-shop from my holiday pictures, including the Tamdhu Station building on the old Speyside line, the Cambus o’ May Halt building on the North Deeside Railway, and shots of the Spey at Granton; these rendered surprisingly realistic by some rubber hedging material in the foreground.

I couldn’t resist getting Ince Castle in as well, so now have four DCC locos installed. And yes: it is possible to run all the trains individually, although it takes careful planning; which all adds to the fun and realism. But being routinely confronted by one’s trains at eye-level at both ends of the day is something I can’t recommend highly enough! 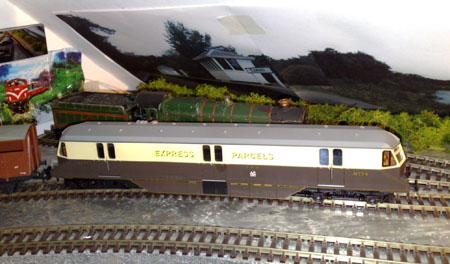 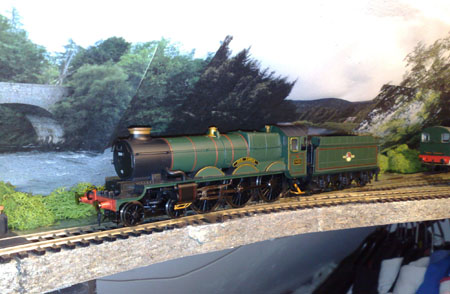 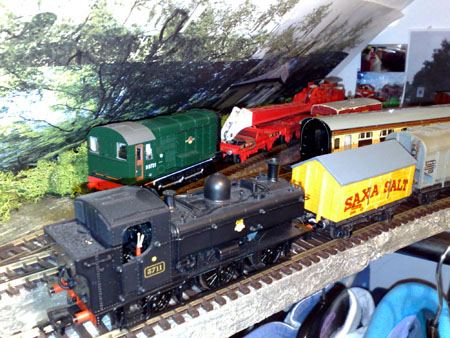 I know – and odd collection today. But what fun!

Don’t forget the ‘ebay cheat sheet’. Still staggered by the comments I get on it. Glad it helps.