Dan’s been in touch again.

He’s sent in quite a piece on what he’s been doing.

I hope you enjoy it as much as I did:

“Wreck Train /MOW (maintenance of way) equipment has been vital to railroads since ties were first laid.

As operational equipment became more sophisticated, so did the maintenance equipment.

Displaying and using this equipment on model railroads can add a lot of visual interest, at a well displayed static location, or as part of an operating session.

I am modeling the Delaware and Hudson railroad in upstate NY, and in doing some photo browsing I came across the below photo by Gil Ford of a D & H wreck train consist.

It features a 200 Ton crane, a gondola as a boom/scrap car, a hybrid tool car, and a repurposed heavyweight coach for the crew. Sometimes there were two gondolas, one on each end of the crane.

I immediately decided that I had to replicate this consist. The D & H, like many railroads, had its share of disastrous road events, one in particular I happened to witness as I was sitting on the edge of the Hartwick College pool.

On a bright February midday, a huge fireball erupted over the mountain ridge east of the college.

That was the evidence of the first of several propane cars that exploded and put themselves in an airborne trajectory 1000 feet across the Susquehanna River… but that is another story. 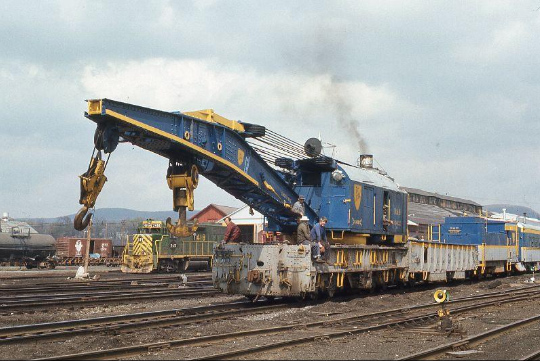 The first car I chose to model was the gondola, as I had one ready for “bashing.”

It started life as a Bachman gondola with the Southern livery. Some alcohol, swabs and a pencil eraser removed all the lettering, providing a clean slate. Fortunately the body side was very close to the silver grey of the D&H.

The next task was to prepare the car interior. I built up a base with wooden strips to raise the future load.

After a warm soapy wash I painted the interior of the car flat black.( It is a good idea to wear gloves to keep your skin oils off the surface. I then decaled the sides with D&H yellow and painted the top rail with D&H Blue.

To create the load I cut a piece of styrene to fit into the gondola, and painted it flat black. I used CA glue to affix a washer and nut for a magnetic option to remove the load from the car. Then I looked through my various parts supply and came up with track pieces, wheels, chain, gears, ties, etc. to create the load, gluing each with CA glue. 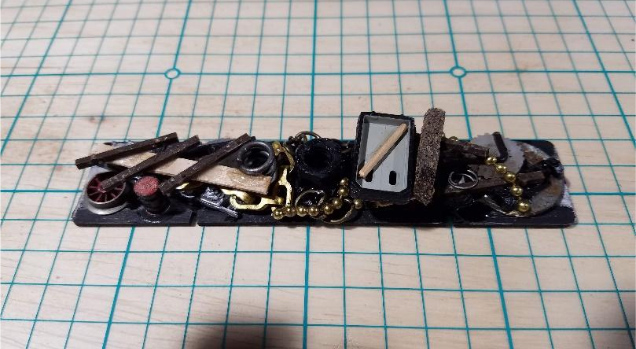 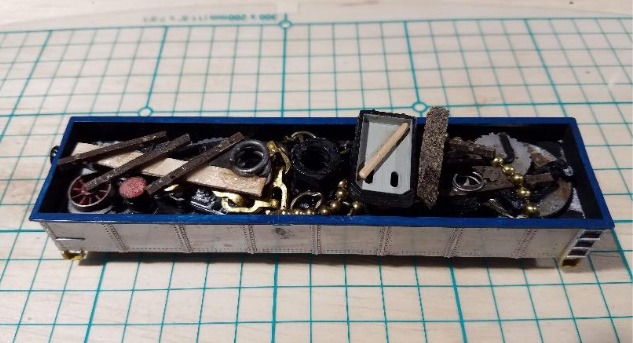 After assuring it would fit into the car I aged the load to the patina of rust. I used various modeling paints; rust, rail brown, raw sienna and followed that by brushing with powders. Once dry with the look I wanted, I sprayed the car with flat medium to affix everything. 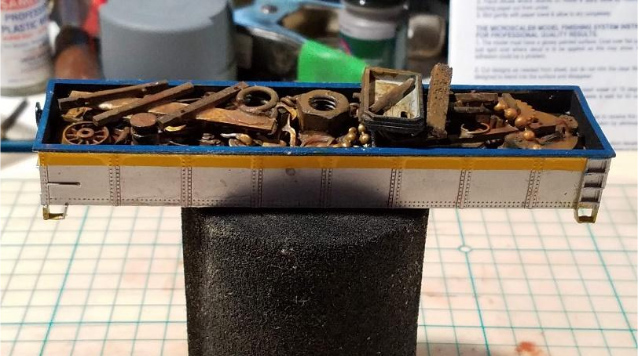 The next car was the 200 ton crane. My 20 year old crane was missing too many parts so I found a complete crane on a sluggish eBay auction.

As I did not want to risk losing parts, I painted it intact, using a fair bit of Tamiya masking tape. Once an edge was burnished, there was no bleed thru with this tape. D & H decals from Micro Scale put the finishing touches to this model.

The next car in the line is the “hybrid car” that I had no information on. Picking the brains of some fellow enthusiasts, like yourselves, I discovered that this was called a “Tool Car” with a boom tender on one end, and part of a locomotive tender at the other.


This was surely created at one of the D&H shops. I was told the tender portion likely held water or fuel. I found an unused tender body and a suitable car in my inventory. Al recently sent over a picture of the tool car under construction. I am just about done with this car now, just needing to put the smokestack in place. 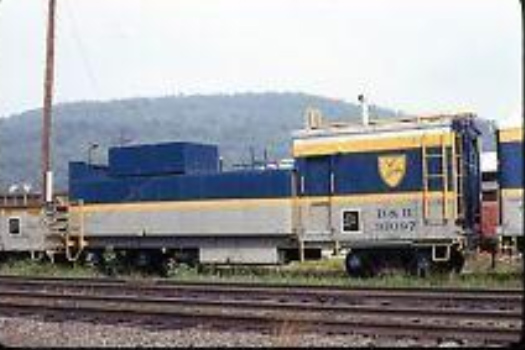 The last car in the consist is the heavyweight coach to transport the crew.

I found the perfect car in my extra inventory, a Milwaukee Road heavyweight coach I bought in a flea market package deal. I added some weight, removed the MR decals, then taped, painted, decaled, added a supervisor on the platform and finished it off with a coat of flat medium.

The bug for heavy equipment was still with me, and upstate NY gets its fair share of snow, so a plow would be in good order. On Craigslist I found an older Walthers Russell snowplow kit and also found that the D&H had used them along with Jordan spreaders as part of their snow removal system.

I was fortunate to find Gil Fords photo of that complete operation, but I think that using “MOW” followed by your railroad in a search engine will yield many photo examples of the type of equipment that was used. I am sure they would look great on your layout. 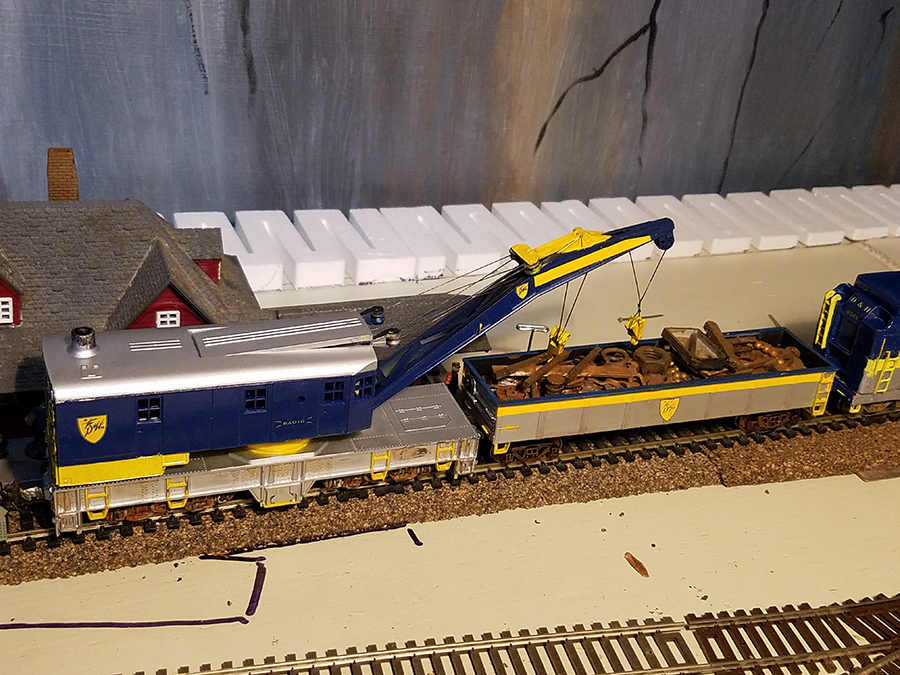 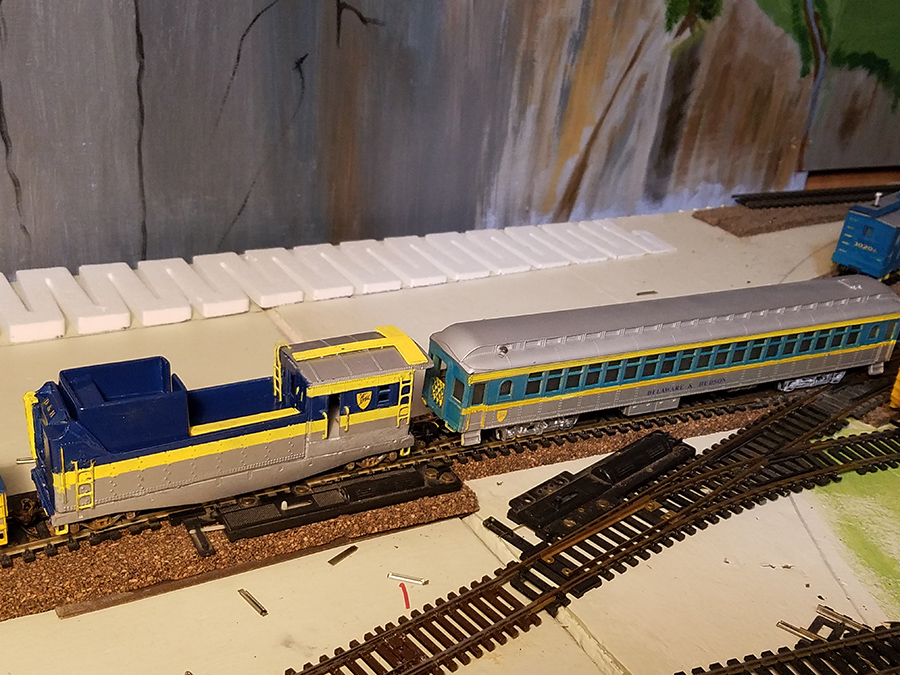 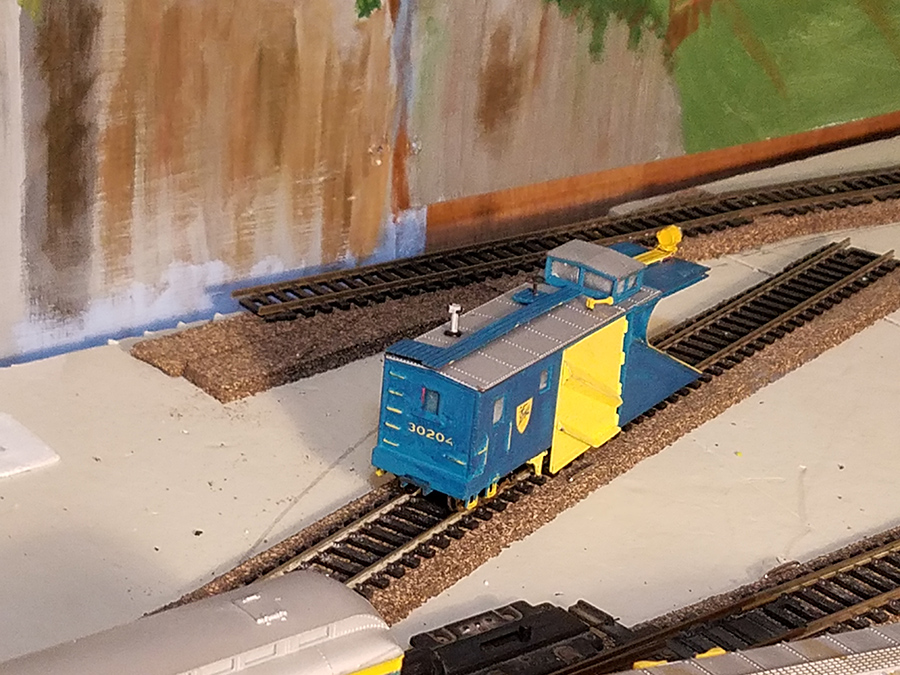 I still have one up my sleeve, a searchlight car, but the painting is mostly done, but I need to rewire the light. Want to put an LED in it.

A huge thanks to Dan.

I don’t think there is a ‘wrong way’ to make a layout – but I have to say, I do find the ones with a good back story the most captivating.

Dan has a done an execellent job, and I can’t wait to see how this one unfolds.

That’s all for today folks – apart from the usual reminders:

If you want find the best deals on ebay, the ebay cheat sheet is here.

And if you want to stop dreaming and start planning your layout, the Beginner’s Guide is here.