“Al, here is some stuff on my permanent, ancient N gauge layout.

It is in a basement space it’s N scale 25×12. That space also include my shop, the boiler, water heater, electrical and water services.

Running a train takes some time and a bit of walking between rooms. There is room for only two or three guests at any time. But five operators can work the line, and it can mimic operation of a 1950’s class 1 system.

It is point to loop, thus trains go somewhere and come back. When they get to the eastern terminal they must be switched to go the other way.

As many of your readers have already established, N gauge gives you the opportunity to do a lot in a relatively small space.

My house is not large thus, the basement is somewhat confined and “she who must be obeyed” allocated only one half of the space to my toys. Thus the lay out had to share the allocated half with in the furnace, water heater, electrical service and my shop.

When we moved to this home, the material which arrived with us included the remains of a 4×8 layout first built 1968 in Washington, DC. Port Jervis Yard and part of Hornel Yard of the current lay out are made from that original effort.

The New York, Erie and Western, was installed in the basement in 1977-78. Its general track lay out has not changed much in all that time. Most of the scenery is that old. I am not a good photographer, an issue less important with standard gauge, so Al you may not wish to use this material as the photography is poor. It is very hard to photograph small things and get the background in focus. I have generally not succeeded.

The E&W is a point to loop railroad based very loosely on the Erie, the line I worked on during the summers from 1959 to 1965.

The layout has a main line which is about 7.5 scale miles from the terminal to the mid point of the loops.

It is two tracks in commuter territory, about 1/4 of the line, and single track with passing sidings beyond. Thus, it is more like the New York Susquehanna and Western than the Erie, but no one is left to know the difference.

There are five holding loops at the west end and three yards. A branch from the eastern yard reaches the port where, as with the Erie, lighters and car floats complete the trip to New York City, one of the few major cities in the World to remain isolated from direct full access to a continental rail system.

Starting from the west. 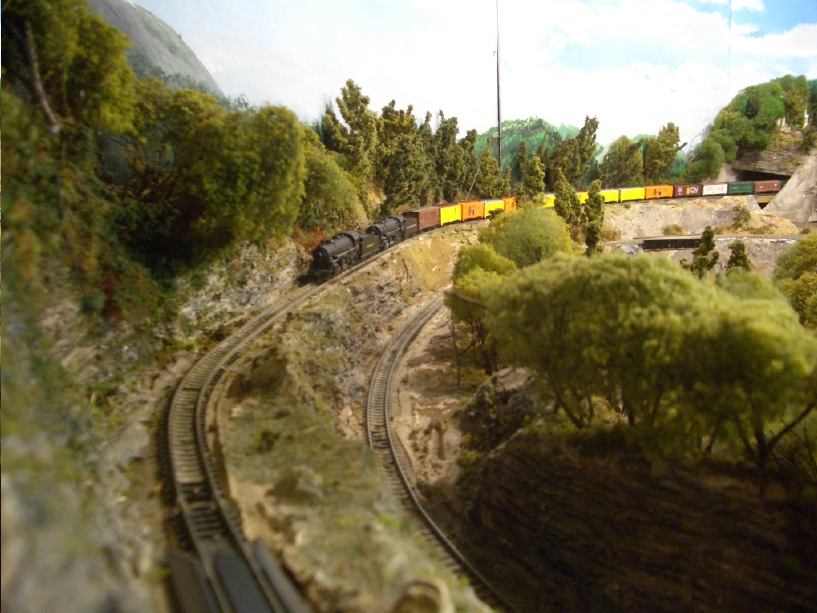 Eastbound freight exiting the western loops. Most through trains need two locomotives. Trains are limited to about 17 cars due to tracking issues on curves on grades. The glory of N gauge is the ability to produce scenes like this, with trains looking small. 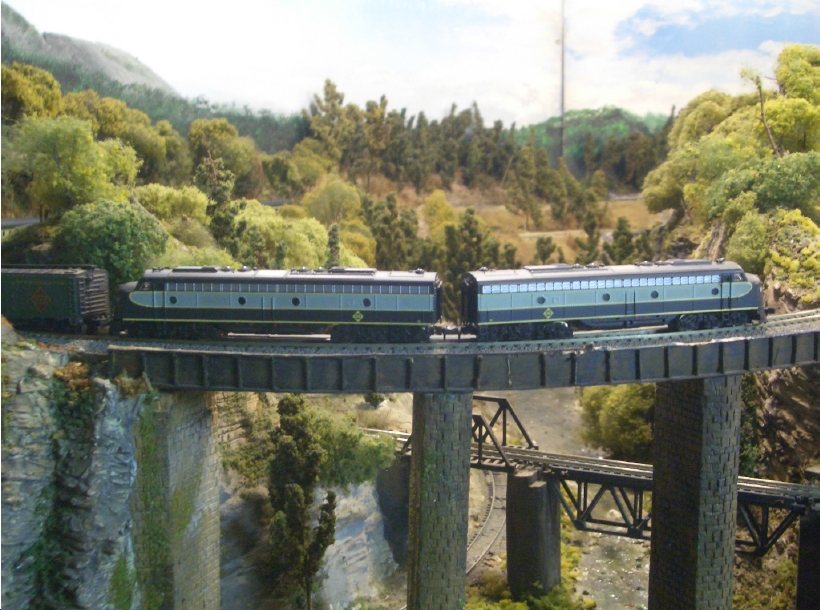 This is the Lake City Limited eastbound west of Hornel, site of the western yard. The dark line in the scenery is a window which, in theory, opens. There has been no need for over 35 years. 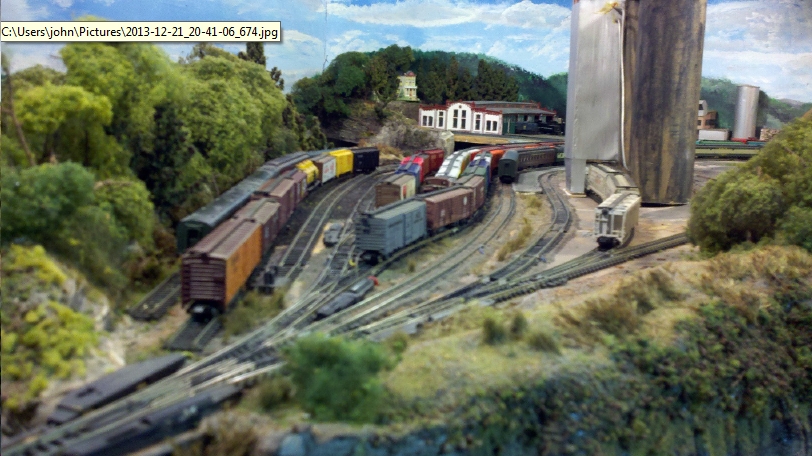 Hornel Yard has an engine terminal and two major industries, this grain elevator and a glass factory.

A local freight from here services lineside industry to the east. Unlike the displays I build for shows, modified circles, this is a model railroad and it is built to reproduce the operations of a class one as of the mid 1950’s when first generation diesels still mixed with steam.


Much of the activity is related to some degree to my own experience on the Erie, though I missed steam by a few years.

In the yards west of the Hudson River we broke up arriving trains for delivery in the City of New York, via car float, and for delivery on numerous branch lines radiating form the terminal yard at Croxton. The operation of the E&W is similar but abbreviated. Even in N gauge a 50 track classification yard does not fit in a small basement so East End Yard has a five track hump yard. 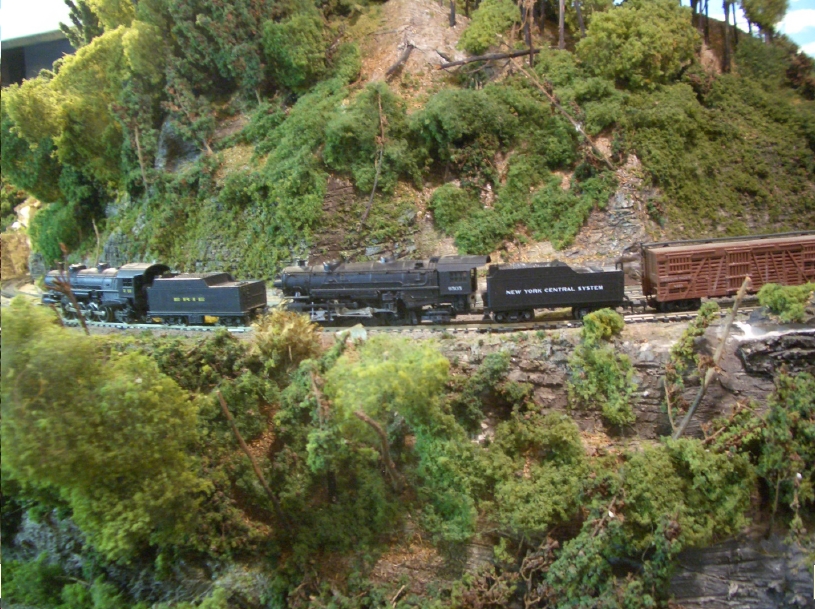 Eastbound freight leaving Hornel. The mountain is made of Styrofoam covered with a layer of plaster mixed with latex paint. Plaster does not adhere to Styrofoam, thus the paint.

This mountain can be removed to access the five loop tracks below.

There are three lift out sections on the railroad to access hidden track, the rest of the scenery is plaster, but rather than screening over a wood frame, used on larger scales, this is generally corrugated cardboard framing with 3 x 3 “ bits of newspaper dipped in patching plaster and laid over a grid made of masking tape.

Additional layers of plaster were painted on for strength and a final layer was added and carved where rock facing was needed. The base earth color is achieved with boiler sludge from my steam heating system applied with a plant sprayer. Plaster sucks up water, and thus the rust in the sludge. It is an indelible stain. 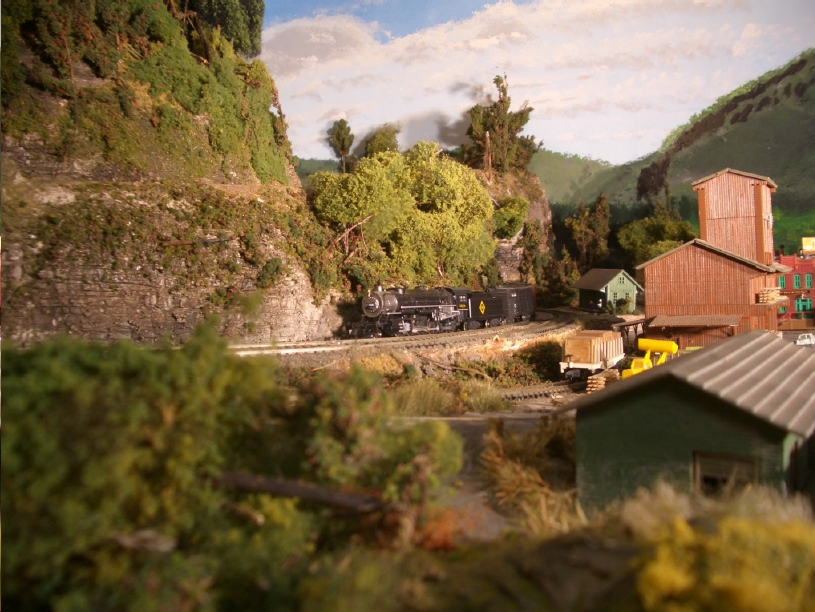 This is a westbound freight at Lawrenceville. The local freight from Hornel services several industries here as well as an interchange with a short line. 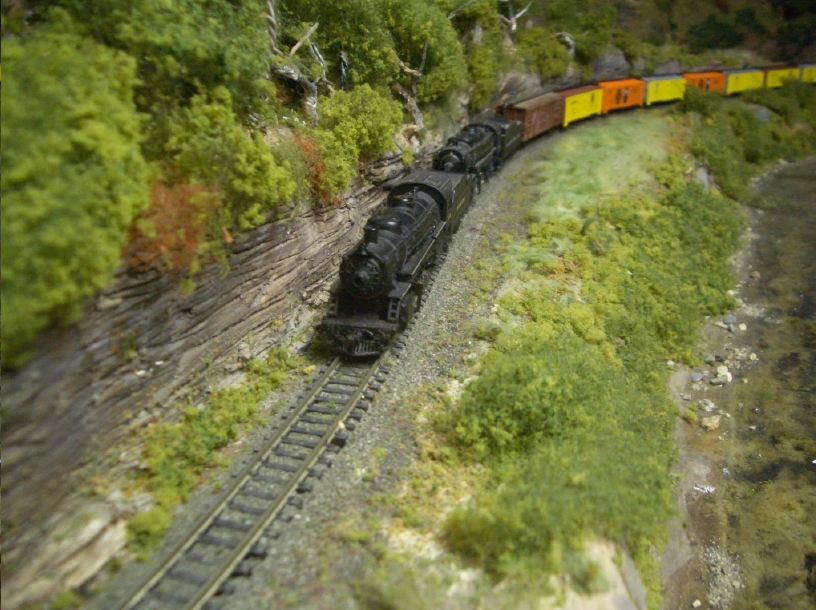 Along the Delaware the Erie had two tracks the NYE&W has one to allow space for scenery. 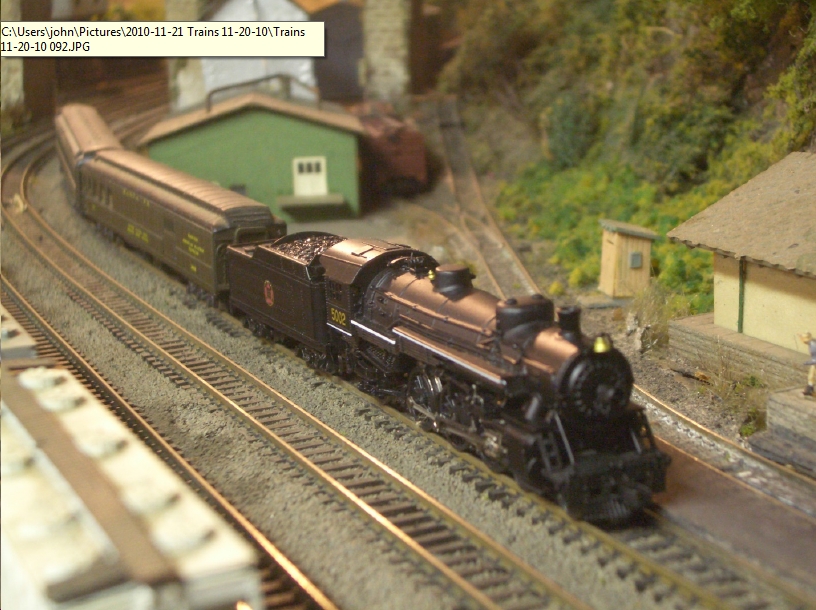 A local arriving in Port Jervis, the mid point of the railroad. Through trains need to change crews here as the eastern half of the railroad runs from a different control panel than the western. Trains pass between the boiler room and the shop three times between East End and Hornel. This train, an eastern division local terminates here. East End and Port Jervis are in the shop. Port Jervis is between two heavy grades, the real division point is at the bottom of one steep hill and at the eastern end of the line along the Delaware. 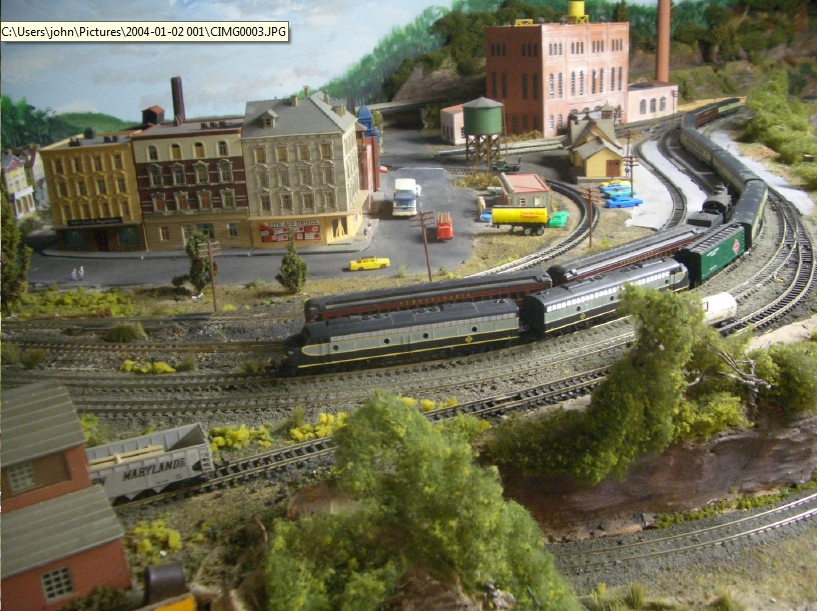 Westport, the west end of commuter service. This is the westbound Lake City Limited’s first stop. A commuter local is waiting on one of two holding tracks west of the station to head east. The Y used to turn commuter locomotives, mostly Pacifics, can be seen converging by the water tank. When push pull trains took over the services of the former Erie, the Y at Waldwick fell out of use. But the early diesels were RS 2s and 3s and they generally ran long hood first, so they also turned on the Y, 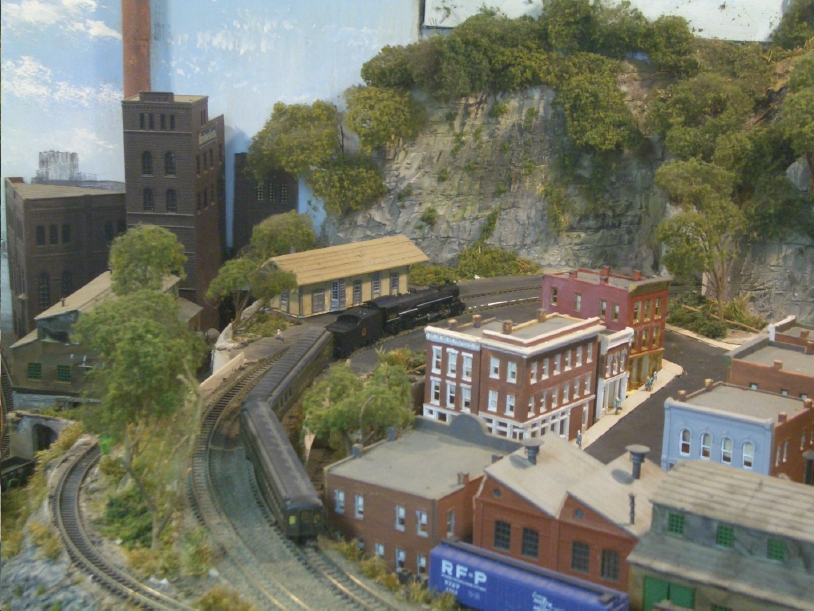 A westbound local approaching Garfield, the second commuter station west of the eastern terminal. A local freight based in East End yard services the lineside industries as far as Westport. 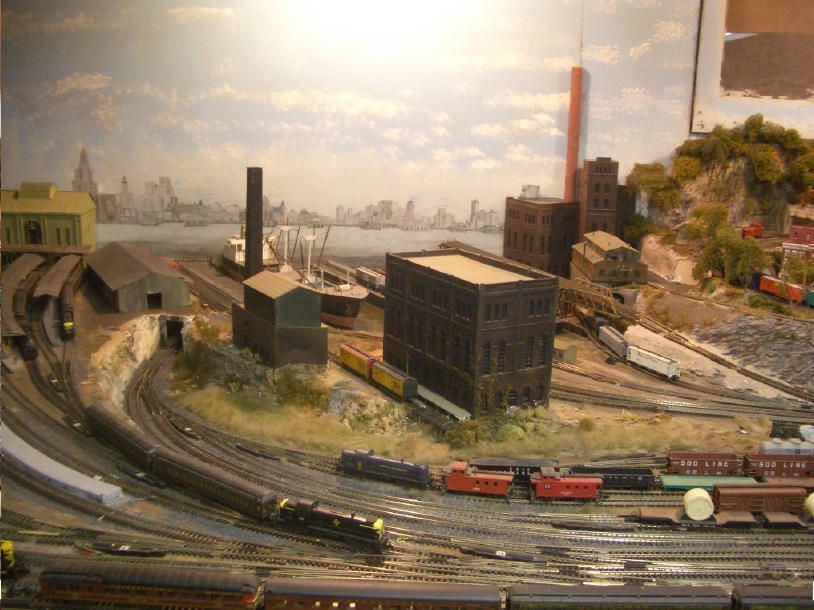 This is East End. The passenger terminal is to the left, harbor facilities, almost empty car float are in the center and the eastern end of the freight yards are also seen as is the long distance passenger yard. The commuter yard is out of sight to the right. Both are accessed by double slip switches on a single ladder track. The beginning of it is just ahead of the departing commuter train. It passes through two of those switches to reach the westbound main. Due to the complexity of double slop switches that ladder is not ballasted.

The backdrop here was my first attempt at a painted scene. It took all summer many years ago. I used water paint and colored pencil on a spare piece of plaster board. The water in the harbor is plywood covered with a thin layer of plaster covered with boiler sludge covered with several coats of spare maritime varnish, critical to both the appearance of water and to holding the base together. a thin layer of plaster, needed only to get the color right, will not survive otherwise. This method is similar to the Delaware but without the sand bars and rocks of a shallow river. This is the Hudson at New York Harbor of the late 1950s deep and far from clean. Boiler sludge is about right.

Wow! A big thanks to John – a wonderful narrative and his N scale 25×12 is a real stunner.

But there’s a but! It’s all getting very professional at the mo, with today’s post, and Glyn’s from the last few days. Please, please don’t forget this site is for everyone.

You’ve only got to flick back through the older posts to see it’s all about sharing tips and ideas. That’s what makes the site.

And if any of the posts have motivated you to get started, then that’s even better. That’s what the site and the Beginner’s Guide is all about.

And here’s a load more N scale layouts if you’re after them.