Ken’s been kind enough to answer your questions and dig out an old video of his layout:

“Thanks for all of the compliments folks! Very humbling.

As far as some of the questions: Scale is HO, and in regards to planning… We didn’t have one. I started this in a very “off the cuff” approach and never looked back.

My son and I did a lot of what we called “playing checkers” , meaning we would try something and discuss and move things around a thousand times until we liked it.

This may not be a typical approach as we reinvented the wheel and had to backtrack many times. But we feel all the nights of the intense deliberation paid off.

The track plan itself came from my memory and my 42 years experience as a locomotive engineer.

I knew I wanted a double main, I wanted to do a little switching, but mostly just wanted to run a few trains for hours on end weaving and winding, over and under.

For the small size of this layout I am very pleased at how well the trains run on my pike.

Basic layout wise, I wanted a little industry, a little open country and some populated rural stuff…Basically a little bit of everything.

Again, for this size layout I think it all came together pretty well through a lot of blood sweat and beers.

As far as the scenery goes my son is an artist to the core and ridiculously hellbent on photo realism. He sees things that most don’t and sometimes loses me at hello.

From a technical standpoint: My trains are all DCC , and I can run 14 different units. I have run 4 at a time but usually run 2 main liners. One with 28 cars and one with 24, plus 2 lighted cabooses. And speaking of lights I have over 400 working lights on my layout, a nod to my 11 years on the 3rd shift.

I have 18 tortoise switches controlled by toggles where I sit and 8 live industry tracks. Now and again myself and some old retired hoggers will have a bit of an operating session, but mostly let the hours melt away as the trains keep a runnin’…

Thanks again everyone, and as I think of more detail I’ll post… Perhaps getting into the wiring, scenery techniques, etc. I’d be happy to answer any questions.

And now another blast from the past. Remember Glyn?

Well his last post is here. Have a look at his progress:

It’s Glyn again – although buried in work lately, I’ve been thoroughly enjoying the excellent posts from our friends across the globe.

I hadn’t progressed much with my own layout due to work commitments and travel but am settling back into a more sane schedule finally.

I have been itching to get back into layout construction as I have so much to do. Watching Dave’s lengthy trains cruising long multilevel tracks made me re-think my own layout.

As you may recall I had a terminal station to the left, a service/maintenance and fiddle yard centrally and a small town station with several through tracks to the right.

The frustrating part was the terminal station – too short for some of the lengthy consists I need to run and the issue of turning steam locos easily .

I also could only run 1 train constantly in a long dog bone type route, interspersing shorter trains in between.

The obvious solution was to turn the terminal end station into a through station but that meant adding track and a major addition. Being a sucker for punishment and quite driven, I decided to take the bull by the horns and re-work the layout!

I converted a 16’x11′ layout into a 20’x13′ by adding a double main line round the back edge of the layout. This meant lengthening the terminal end station on the left by nearly 3′ into a through station looping around behind the old town up a slightly inclined ramp toward the rear of the layout.

The double track will then climb gently across the mountainous rear portion across Faller’s Bietschtal bridge (yet to arrive but ordered) then back around the right hand side of the layout down a gentle 2% grade back to the through station district line.

I modified the trackage on the right to create multiple running options for both long inter-city type trains as well as short district trains and heavy freight so it should prove far more entertaining for multiple operators to run locos.

I’ll be able to have 2 large consists running in opposite directions continuously as well as interspersing shorter rural passenger and smaller freight trains simultaneously – much more fun all round.

So this weekend, I wandered off to Lowe’s and a very kind fellow in the lumber dept ripped up a pile of wood for me and I returned home, burying myself in the basement for about 8 hours until I had the ramps built and new track set up roughly. I’m attaching pics of the progress.

I can’t do a great deal more construction on the rear portion until the bridge arrives for me to build but at least its taking shape. Thanks to Dave for inspiring me to commit to the re-vamp! 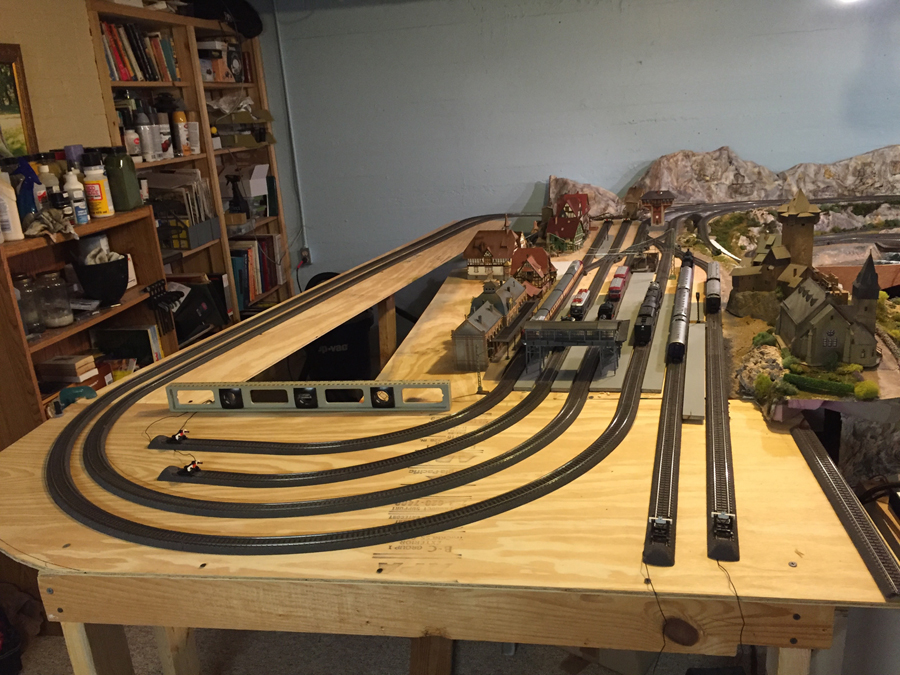 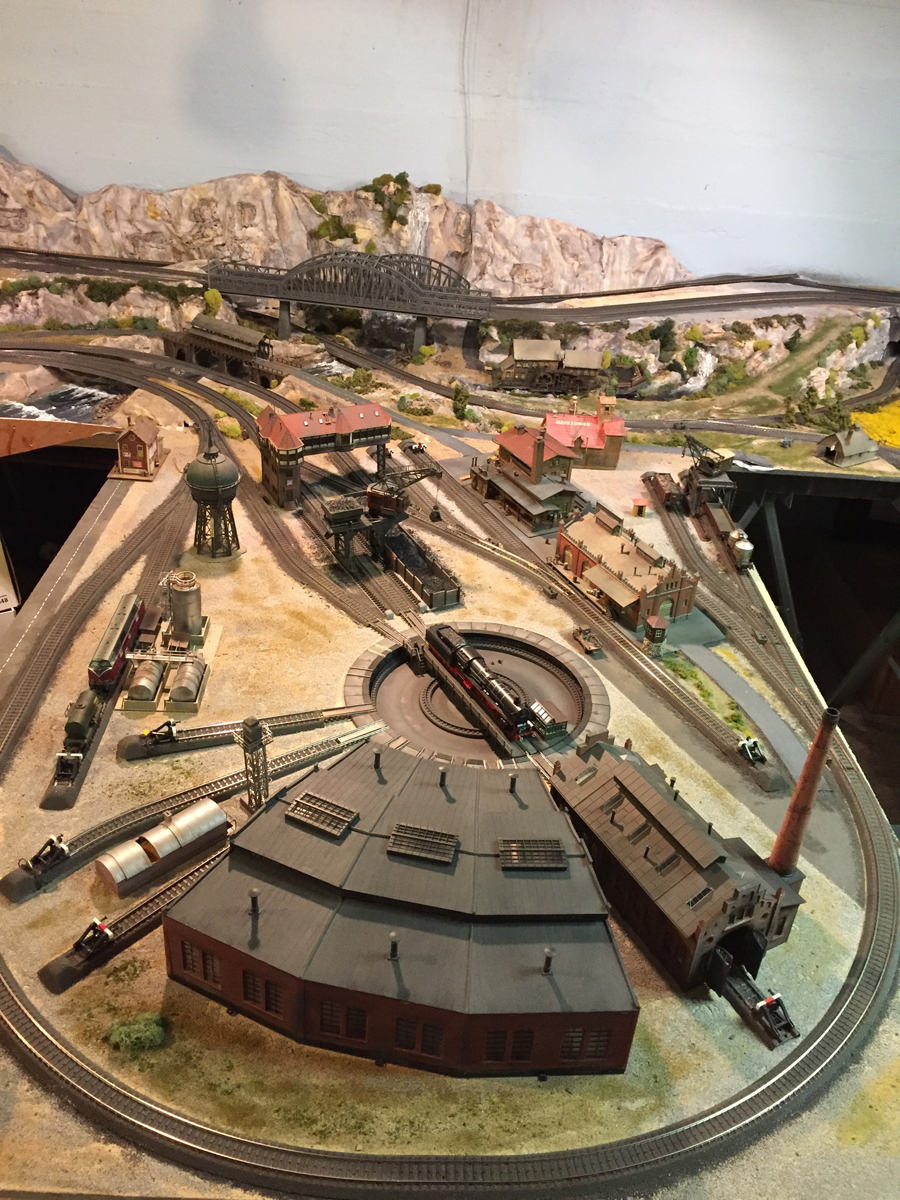 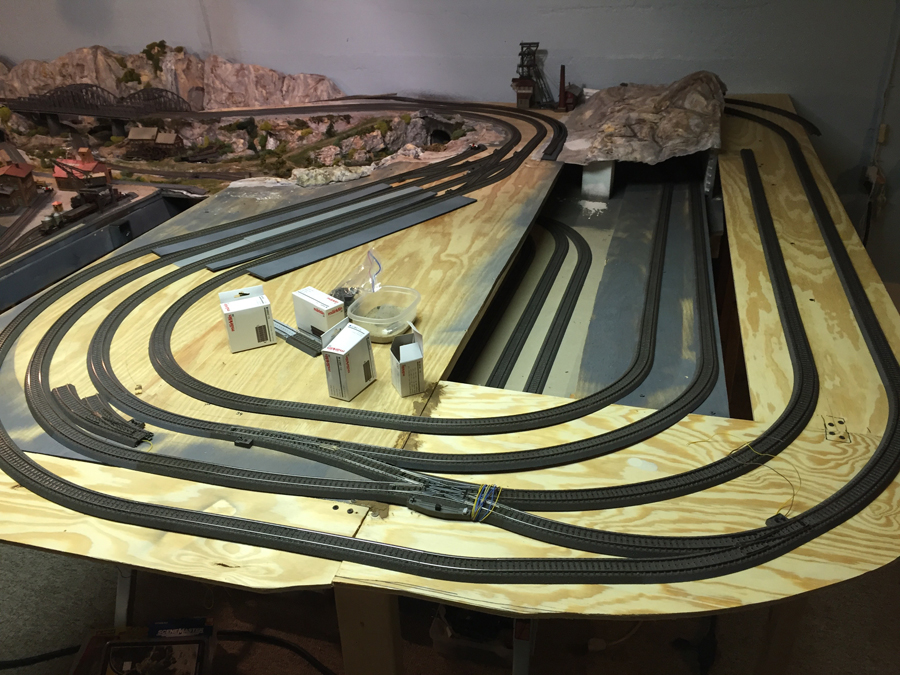 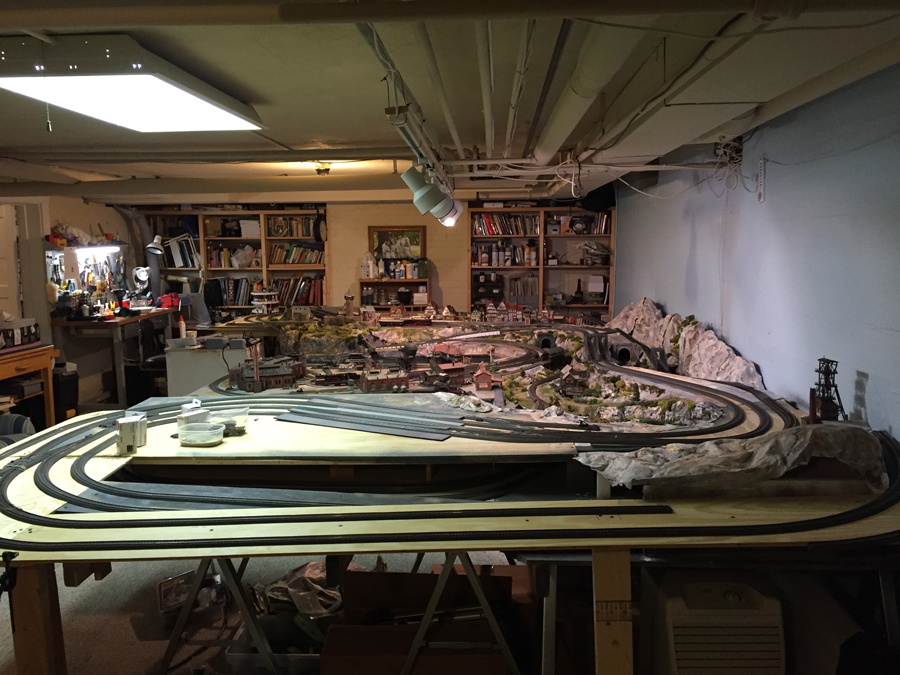 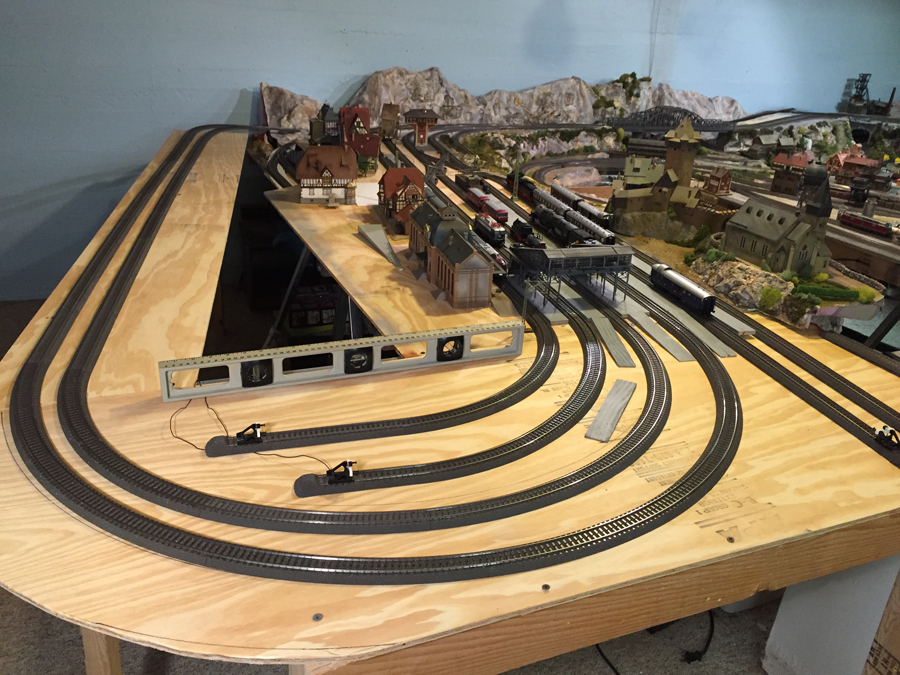 A huge thank you to Paul, Mark (Paul’s son) and Glyn. Really enjoyed today’s missive. Hope you did too – have a look at the comments below!

And if it’s inspired you to get going, the Beginner’s guide is here.

38 Responses to More from Ken