“My name is Cary from Crestwood Kentucky. I’m 52 years old and started collecting a G Scale railroad layout when my son was small.

I always wanted to do a G scale railroad layout but it seemed impossible without adding an addition to my house. I finally decided to do an outdoor layout.

I’ve been preparing the ground for the last few summers, in the winter months I’ve been building structures, vehicles and painting people which has been great fun!

For buildings, I’m using concrete backer board for the base and roof. I’m using real shingles, exterior house paint and lots and lots of construction adhesive and caulk.

Hope you enjoy these photos, I look forward to sharing more with you as this project develops.

My first project was this church. The walls are birch plywood that I cut vertical grooves in with my table saw to give the look of planking.

I lapped the shingles, but have since found a better method. As you can see I didn’t attempt real windows on this first project. 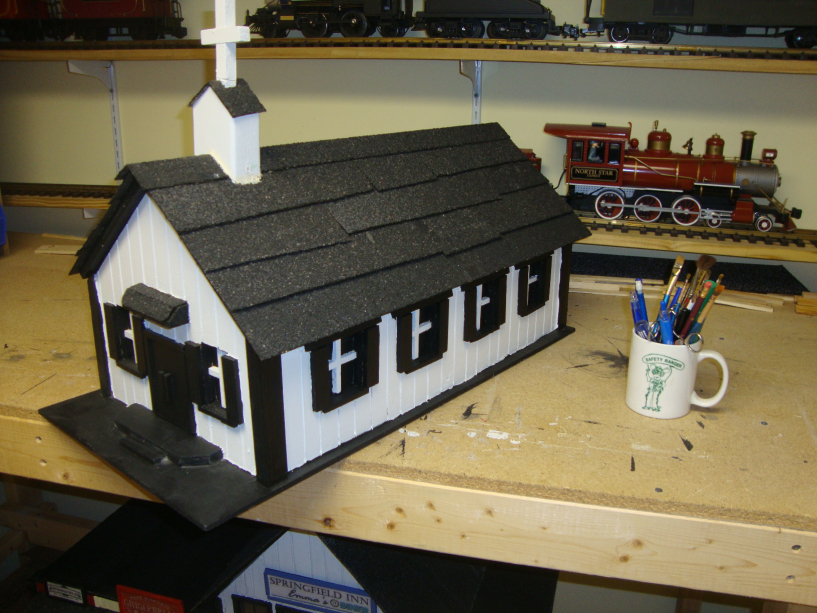 The water tower started with a large coffee can and planking I ripped on my table saw. This was my first attempt at building trestle and I was pleased with the result. That’s the fun with a G scale railroad layout! 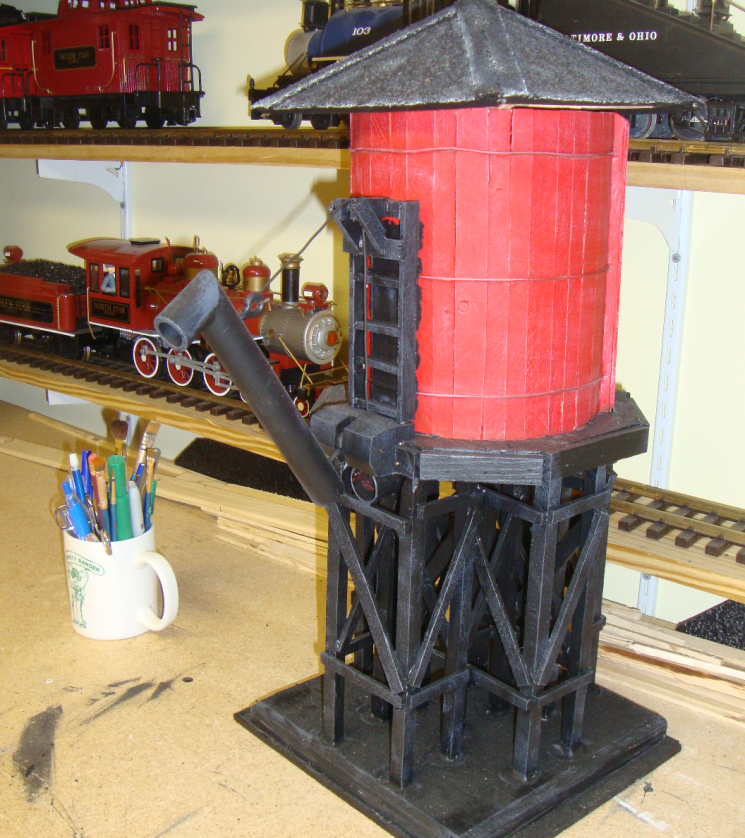 The train station is plywood with planks glued on the outside. I tried windows using some thin plexi-glass. Still not the effect I was hoping for but a step closer. The shingles turned out much better by just gluing them down flat and covering the seams with a thin piece of shingle.

I use construction adhesive on the shingles but also use hot glue when corners flip up, the hot glue dries fast and holds the edges in position until the adhesive dries. 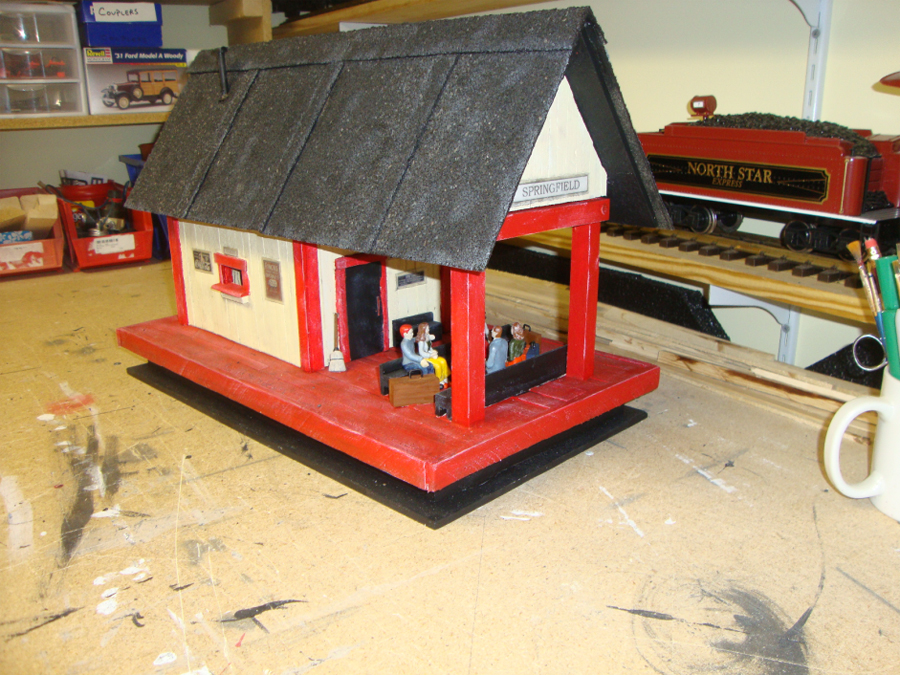 The figures are 1/24 scale from Ebay/China. they were inexpensive and have a reasonable amount of detail. The luggage is blocks of wood with wire formed for handles. 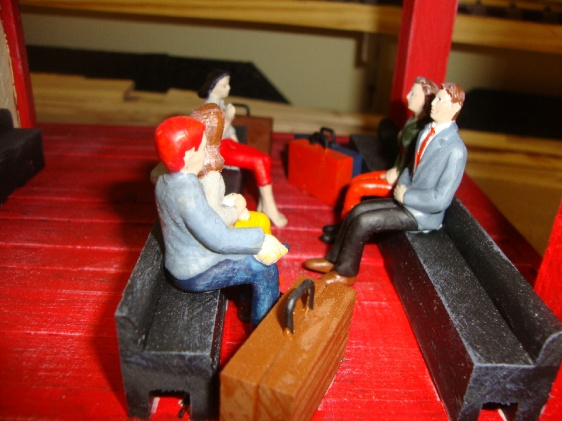 My most recent and most ambitious project is this two story hotel with shops on either side. The walls are birch plywood and I used a router on the back side to mill out around the windows so the interior of the window would not be too thick.

The window panes are painted onto the Plexiglas.

The signs are also caulked and glued under plexi-glass and lightly airbrushed with dull coat to remove the gloss.

You can have a lot of fun with a G scale railroad layout. 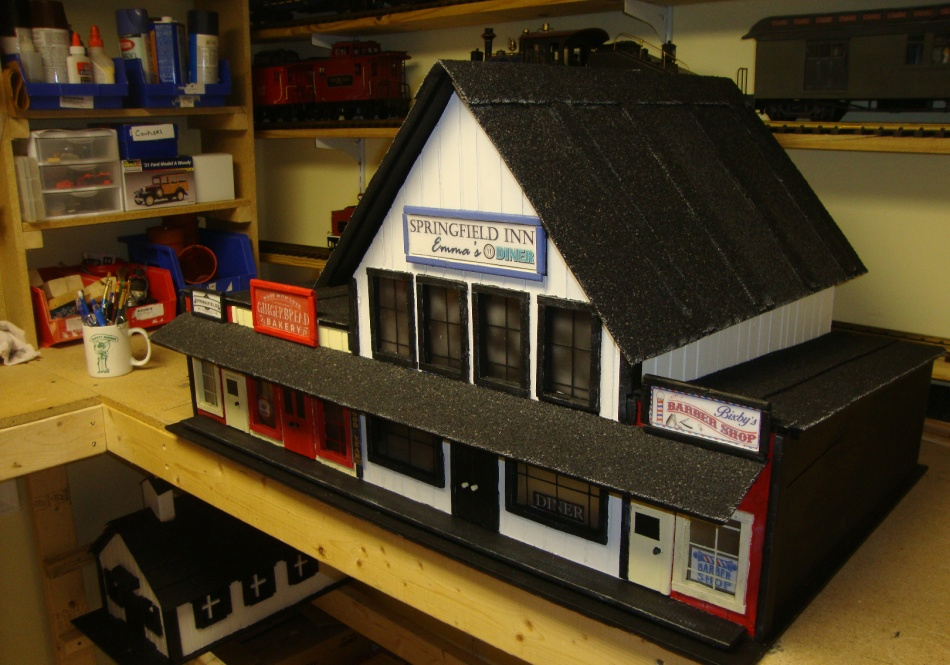 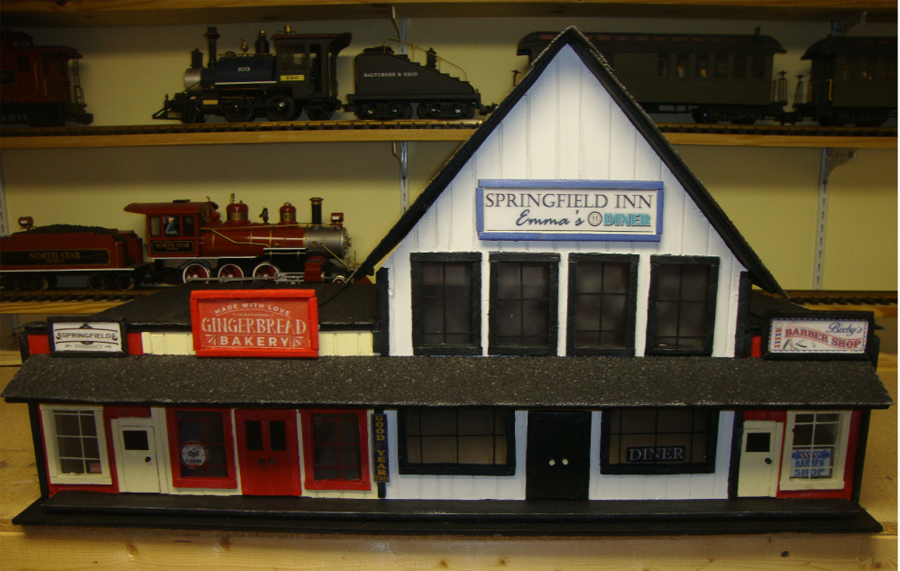 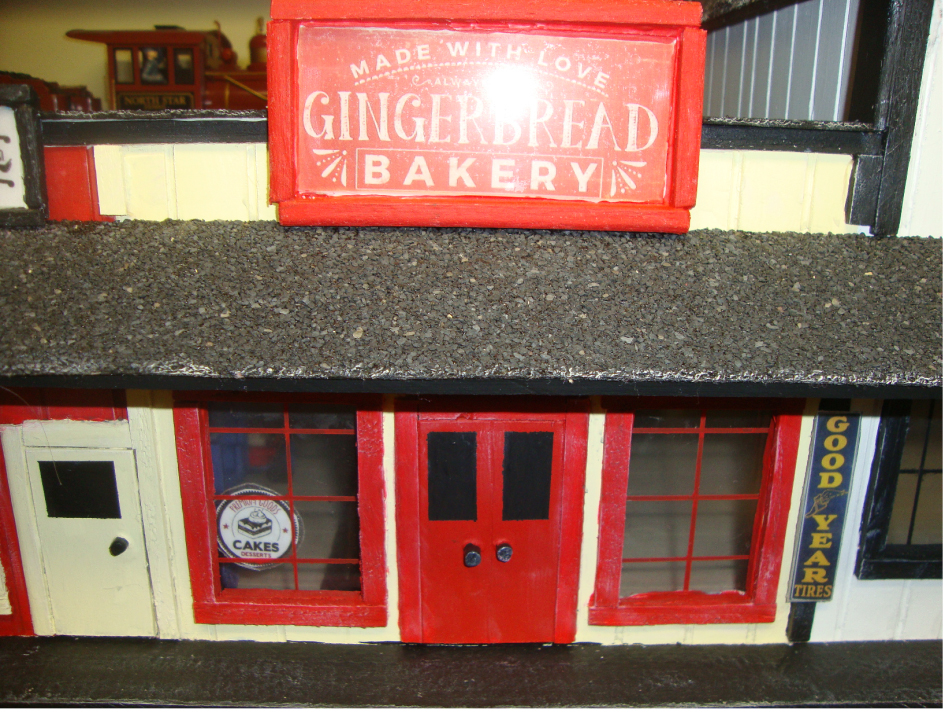 I always make the roofs removable so I can make repairs and look for critters once the buildings are outdoors. 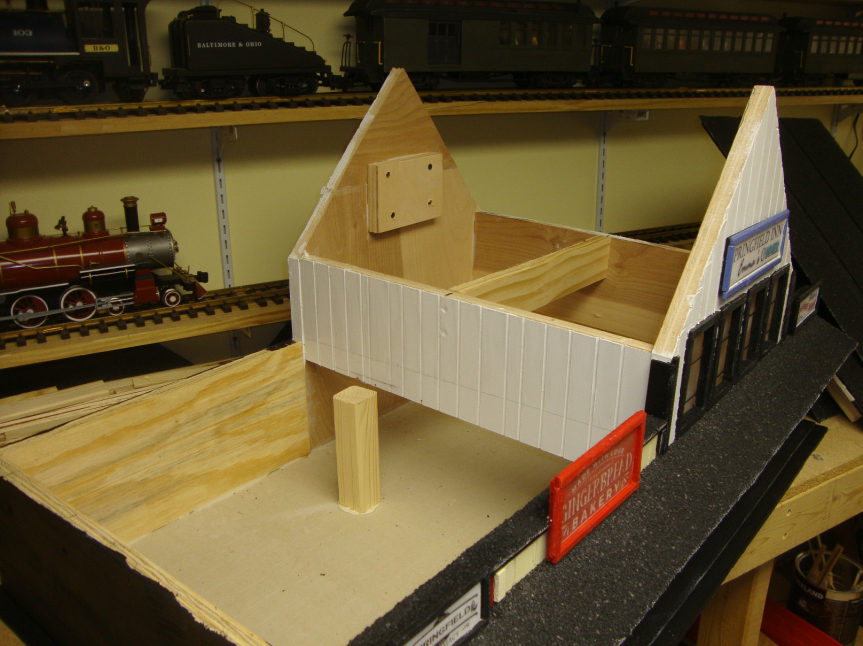 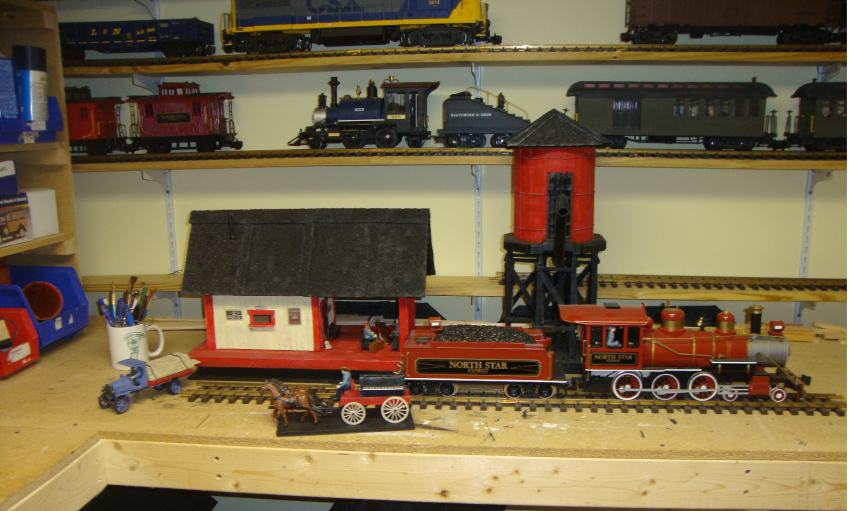 I found a 1/24 scale covered wagon on ebay, not a great kit, but the horses are very detailed.

The truck was a 1/24 scale Ertl die cast coin bank I picked up for $8. I removed the tanker on the back, painted it, added a flat bed and a figure. Good detail, made of metal to hold up outdoors, and inexpensive…..I’ll be looking for more of these!

The thing with a G scale railroad layout is the size gives you lots of scope. 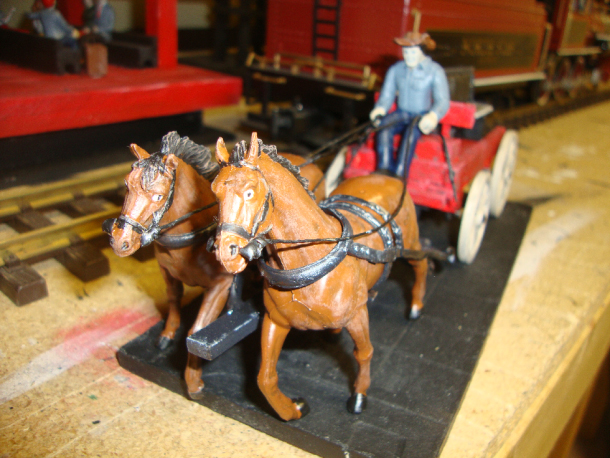 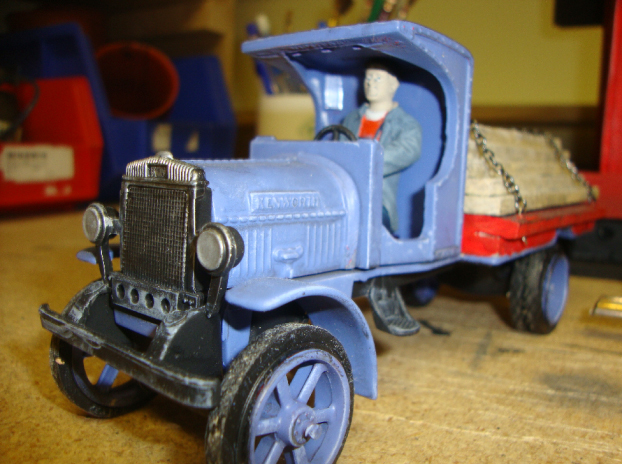 Thanks to Alastair for his emails, it’s always interesting to see what others are doing.

“Here’s a quick introduction and some first videos of my current N-scale layout which is under construction.

Like many modelers my age (I’m 74), I started out when I was young with a Lionel train set that my parents gave my brother and me. It was a typical oval with an internal route using two switches. Within a couple of years, I had mounted the track on a 4×8 sheet of plywood painted green, set in a paper mache tunnel, and added a few buildings.

It was my first and only “compete” layout. I spent hours running the train and setting off cars at the siding. (I would give anything to have photos, but back then we didn’t photograph much.) A couple of years later I tore up the track and started to rebuild the layout; we moved and it was never completed.

Over the next 40 years I started at least five HO- and N-scale layouts. None were completed and only one was built to the point that trains were running.

Twenty years ago, I began a large G-scale outdoor railroad that, although trains were running most of the time, I never considered complete. Also the changing weather in northern New Mexico where I live (temperatures go from 100 deg F in the summer to -10 deg F in the winter) caused the track to continually move about, necessitating frequent rebuilds. Worse, elk and deer would come through my back yard to drink at the pond, ripping up the track. Finally, it was becoming increasingly difficult for me to get down on my knees to work on it. So it is on hold for awhile.

About a year ago I discovered your site and was intrigued with the multitude of beautiful model railroads. I became determined to finally complete a layout. I purchased the Woodland Scenics “Scenic Ridge” N-scale kit which included everything needed to build a 3×6 layout using their system. (I highly recommend their products for building light weight plaster cloth and foam layouts.) My rational was, if I got everything at once, I might complete it. I also bought their “Town and Factory” building kit with everything needed to build 13 buildings.

After about eight months, the first stage of the 3×6 layout is virtually complete and trains are running. The scenery is mostly done and about half the buildings are put together and painted. I followed the original track plan (which can be seen on the Woodland Scenic website), but added three additional sidings: one to the factory and two in the yard shown on the bottom of the videos. This will allow some switching action.

But, of course, nothing stays the same. Now I am starting a second stage which will more than double the actual track, plus add a hidden three track staging area. I’ll also continue to work on the first stage, improving the scenery and adding people and vehicles.

Two wonderful narratives today – a big thanks to Dean and Cary – quite a G scale railroad layout. What a project!

And as Cary said, it’s wonderful to see what you are all up to. If you compare today’s post with last time, you really do get a feel of all the different styles and scales.

Hope you enjoyed it as much as me. And if you’re still watching from your armchair, and want to get involved, the Beginner’s Guide is here.