More of your railroad layouts and pics

“Hi Al….Started a new one this year…Hollow core door and will have a 4ft extension off the back left….Have a good week…. 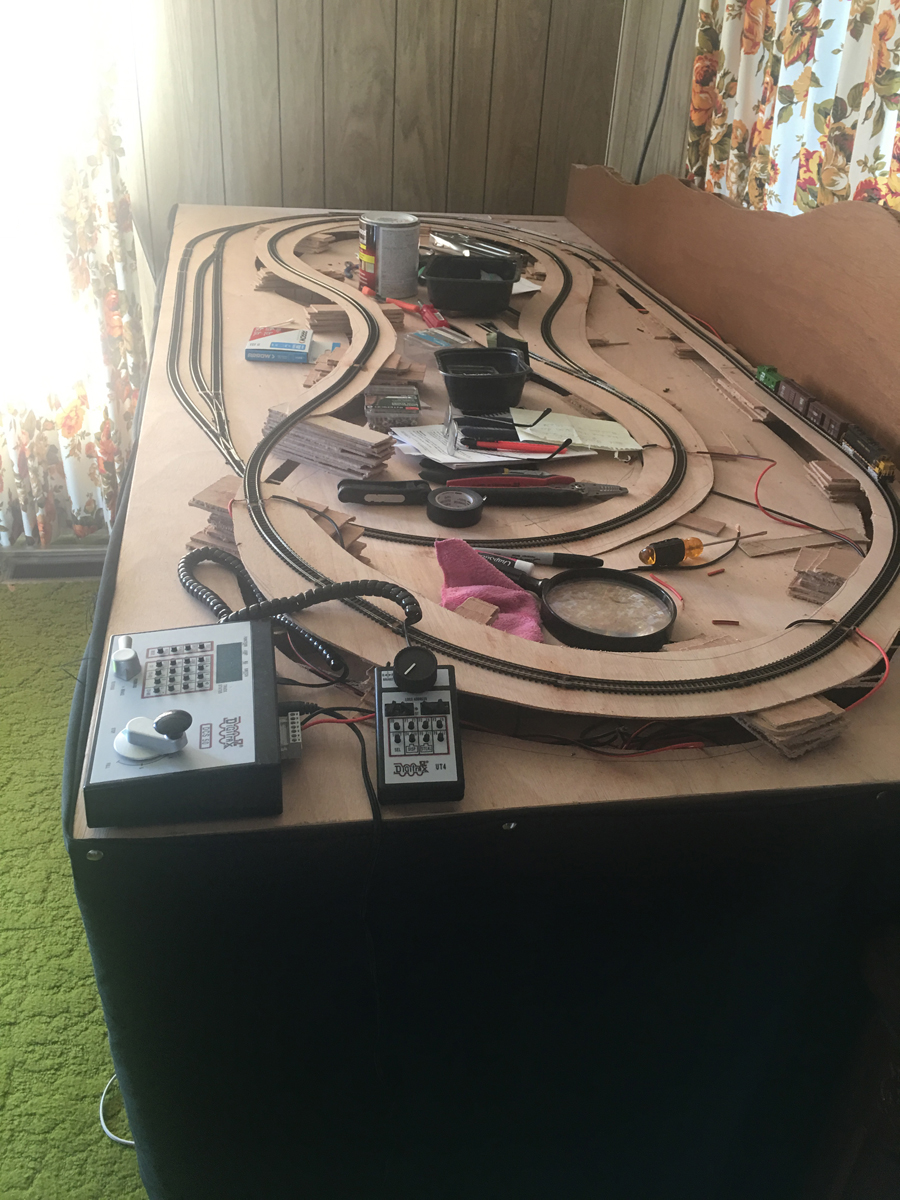 I came across a substance that I used for making my roads in and out of my township. I went to a local supplier to a builder of houses that the outside was Stucko. (plaster with fine sand mixed in) The have lots of grades of sand to choose from as well as colors.

What I loved about it most of it was mixed wrong so I got loads of it enough for a supper highway. I had my railroad in 0-27 three rail.

My city was all of plaster houses as well as some other O scale buildings. these building blended well with the mid centery look I was aiming for. I also was able to make the roads to have a hump for the middle of the street and at corners as well. It really worked well for the scale.

I am a guy that love the looks of real RR layouts but do love the three rail aspect of it being a toy. My entire layout was 17 feet long and 6 feet wide. within that I was able to put a long loop, a siding, two reverse loops as well as a figure 8. My curves on the main line were 054 and 031 for the logging area. I made it so I could run three trains at the same time on connected with one another and yet have 4 different levels of tracks. Yes it look as if it really was a toy train. I loved it.

Now its no longer because of my health I have taken it down and is just in my mind. I sold my one and only 4449 in the freedom colors . I’m from Portland Oregon and grew up with that locomotive. Mater of fact…. I sold the two doors from the original locomotive. I will write you when I think of other things I thought up for the dream I once had.

I sent in pictures of the start of the helix addition to my train layout. And I said I would send some videos of the trains running. I am just using my cell phone as the camera.

Because the helix is no where near finished the trains can only run from each side to about 90 percent of the first ring. The first ring has the track running but the rest of the mods (trees, people, train stops, etc) to the ring is not finished in the pictures. So I am sending two videos. One with both trains on the left side and one with both trains on the right side.

I have finished the first ring and tested it again (after I made the videos). and found out that I have made the trees too fat and they interfere with the passage of the train. So still working. Will send more probably when the helix is half built.

That’s all today folks – thanks to Lawrence, Don and Mike.

And don’t forget the Beginner’s Guide is here if you want to get out of the armchair and get going on your layout.

7 Responses to More of your railroad layouts and pics