Here’s part two of Eric’s epic weathering ‘how to’.

Now that the locomotive is done, we can devote ourselves to the weathering and detailing of the Marklin coaches. The first step would be to paint the OO scale figures (here from Dapol’s range). I first remove the plastic base, then trim the imperfections with a small file. After this, I glue them on a small strip of plasticard to handle them easily while painting them.

I first brush a liberal coat of « Foundation White » before painting them in order to detect any defect on the figure. Then I paint them with the darker tones first before drybrushing lighter ones afterwards in successive and lighter drybrushes till obtaining the wished result. For the Steam engine team, very visible in the cab, I decided to push the detailing level higher with more highlighting drybrushed to make them more realistic and more “like moving”.

The interiors of the coaches are first painted with « Foundation White » as a Primer. The interior walls being white, I had not to work anymore on them…

I then painted the seats in red or in green (depending if it was first or second class). The correct red color for the first class seats is a mix of “Red” with a bit of “Burnt Umber” or “Chocolate Brown”, and the one for the second class seats is a mix of “Dark Green” with a bit of “Foundation White”). An easy way to make the difference between First and Second class compartments on the Marklin interiors is that the space between the seats is larger in the first class compartments than in the second class ones.

Next step : Brushing a mix of four parts of « German Grey » for one of « Foundation White » on the floors.

Now, we can place the figures, but first we’ll need to cut away the feet as they will be too tall for the interiors to be realistic. We also put some blinds on the windows of the compartments that are not detailed or will house the wires for the interior lightning (to be installed later from a Dutch DIGIRAILS coach lightning strip). 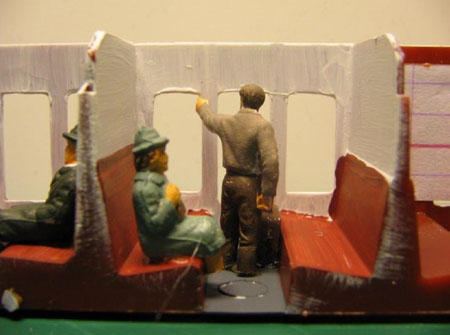 The Locomotive driving team is also glued inside the cab of the « Royal Scot » steamer. Before gluing them in place with some Scotch universal glue (the green tubes) we test-fit them in the cab to find the most appropriate disposition before gluing them definitely there. 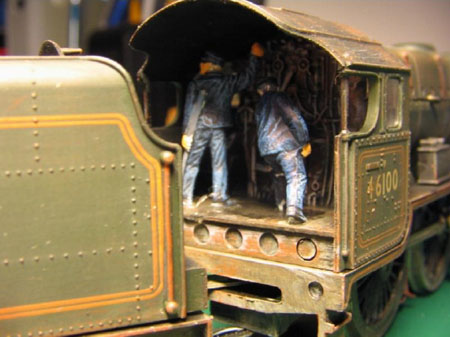 And after looking at the coaches with the interior put back inside them (relatively easy to do on the Marklin models), you can see this through the windows.

Now we can start the main weathering process. I prepare a mix of “Dirt” that I drybrush on the bogies and the chassis of the coaches.

I then dilute this mix (1 part paint for three to four parts of water) and brush this wash over the coaches bodies. I do not apply masking tape on the windows as I have my own cleaning method to use afterwards. The first wash is dried with a clean tissue in a light up to down movement on the flanks of the coach. The second and third are brush dried with the filbert brush. After applying those washes, I clean the windows this way : I brush some medical alcohol with a small round brush on the window glazing, and then scrape the paint with an old shortened flat or a cotton swab. The result will be cleaned window with a really light coat of dirt on it and dirt agglomerated near the edges.

I then prepare a wash of « Black (3 parts paint for one part water and a drop of alcohol). I apply this with a small round brush in the recessed lines and crannies to darken them.
I then can start weathering the roofs. I prepare first a mix of Black Glaze and Smoke (10/1) and I brush it on the roof. I then immediately wipe it with a sponge, leaving a light coat on the roof and darkening around the structure lines. The second and third coats are wiped dry with a large flat brush in transversal movements, perpendicular to the sides of the coach, starting from one end to the other end of the roof. I finish with a wash of the mix, highly diluted, and directly wiped dry with a clean tissue. When dry, I then brush some lightly diluted “Black” on the centre of the roof and then blur it to represent the soot deposits from the locomotive’s exhaust. 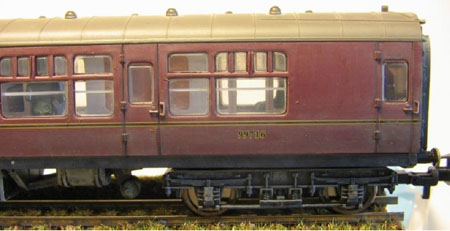 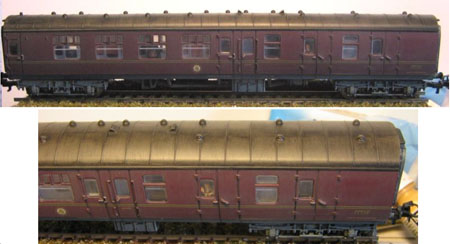 We’ll now start with the rust. I prepare first a mix of “Old Rust” (2 parts of Cavalry brown, one of Burnt Umber and a bit of my black wash to darken it). I drybrush this mix on the bogies, the chassis and the roofs.

Then I prepare a mix of « Fresh Rust » lightly diluted (3 parts of cavalry brown for one of water) and brush it near the roof vents and then blur it with the sponge to simulate rust. I do not forget to drybrush a bit of this mix on the chassis and bogies to represent some fresh rust there.

And here is the final result of this work : the 2-3-0 « Royal Scot » BR steam locomotive from Airfix with the two Marklin Ex-LMS coaches. The pictures clearly speak for themselves and are a true and real plea in favour of the Weathering of Scale Model Trains !

Wow! A big thank you to the talented Eric.

Heading off to ebay? Use the ‘ebay cheat sheet’ to save even more.