Below Roger shows us how to make the slide. What I liked about it is you could use this technique for lots of things.

Here’s the children’s slide for Paperclip Park, rather more complicated than its predecessors and doubly fiddlesome. Not that it’s any more difficult to make – just requires a little precision and attention to detail. And all you need is a few paperclips and a little chilled food packaging so you can have as many failures as you like! If you tinkered away at the swings and roundabout, you have to have a crack at this one. 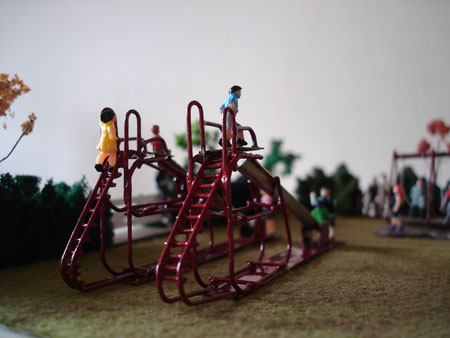 1) You make the main structure in two sections, TOP and BOTTOM. You’ll make the sides first, then join them with cross-members, a base and a top platform. Bend two paperclips to form the TWO sections which make up ONE side of the structure (FIG 1). It’s quite important (but not essential) to work on one of those self healing cutting mats with squared marking guides (FIG 2). This enables you to get your right angles spot on – important for this one – and they make a superb cutting surface. Only a few pounds new on eBay and you’ll get a lot of use out of it. 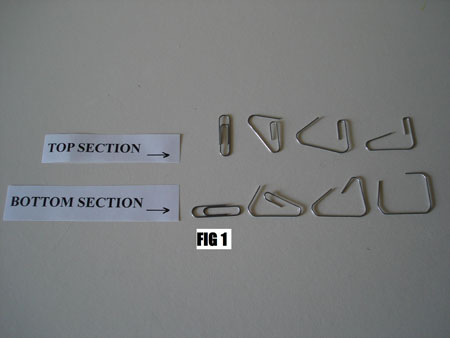 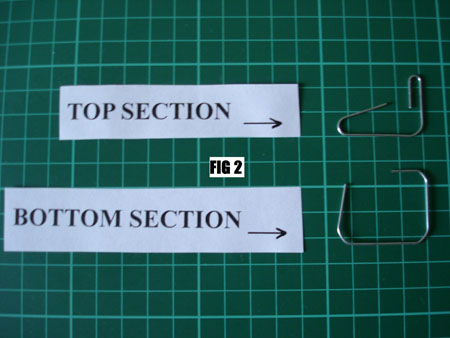 2) Make up another two identical sections, TOP and BOTTOM, for the other side of the structure. Your paperclips must be identical – there are variations even in clips of the same size. For OO scale mine were 3 cm, top to bottom. Lay them one on top of the other to check that they’re identical – and make sure the right angles square up (FIG 3). 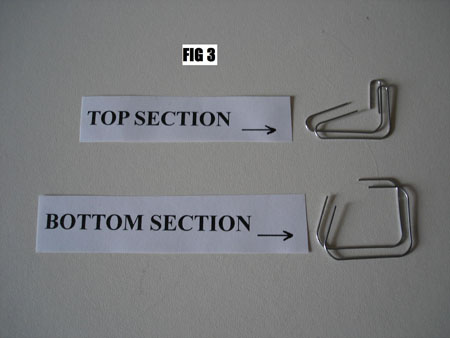 3) To make the first side, lay a bottom section OVER a top section exactly as pictured in the photo (FIG 4). The arrows represent the gluing points. Practice positioning several times before gluing. I mixed up a tiny amount of two tube epoxy glue. You could use superglue, but epoxy sets like rock. I used both – but always reinforced the joints by touching in some superglue around them after they had hardened. Alex wrote in to the site with a useful tip. Superglue need to be starved of oxygen to bond – so spray the added glue with a mist of water – or dunk the model! Haven’t tried it yet. Scratch all surfaces to be glued with a craft knife and apply glue to both top and bottom sections. 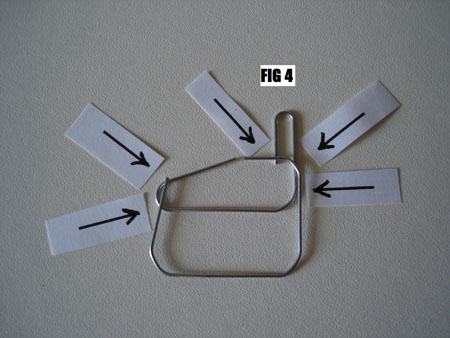 4) To make the second side, TURN OVER the top and bottom sections. You now have a reverse image (FIG 5 – with glued sections in a clamp). But again – lay the bottom section OVER the top section and glue. Leave overnight to harden. 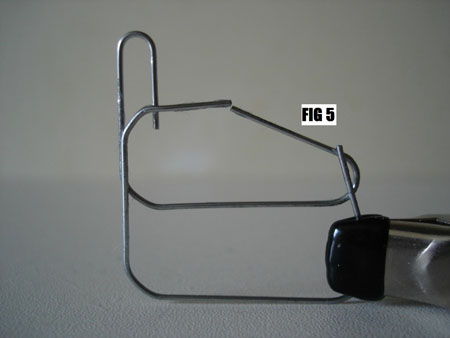 5) To join the two sides, first cut out a top platform and a base from the free chilled food packaging that I often use (from this point on I shall call it ‘FP’). Also four joining cross members from paperclips (FIG 6). All of these should be around .75 cm wide.

I used that clever two-tube epoxy which gives you additional time before beginning to set. Bit slippery when first applied, but you can gently move pieces around if they fall off the vertical – for quite a while. Glue the side sections along the base first. Support them either side with matchboxes or suchlike. Then add the top platform. Then drop in the metal cross members. 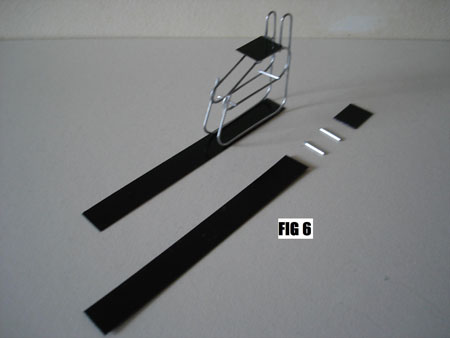 6) To make the chute (the slide itself) cut a strip of FP. It’s flexible, bends and holds creases. But if you choose a curved piece, you virtually have the slide without the need to bend it (FIGs 7 and 8). It must slot between the supports on the downward slope so it needs to be around .75 cm wide. 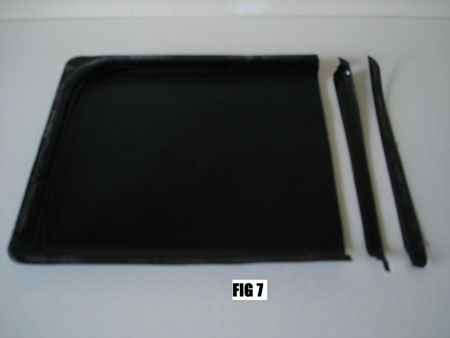 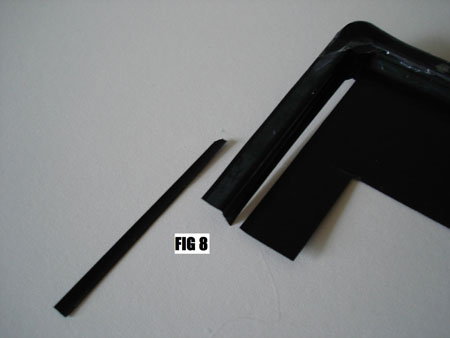 – You need a bend at the foot of slide. To achieve this, mark off 6cm from the top platform to the bend and cut two TINY nicks at the mark on both sides of the chute. These will promote the bend.

– Boil an electric kettle and allow it to go off the boil. Grip the chute between the fingers of both hands, either side of the proposed bend. For ONE SECOND ONLY (perhaps less) pass the chute through steam while bending it a little AFTER THE KETTLE HAS BOILED (FIG 9). 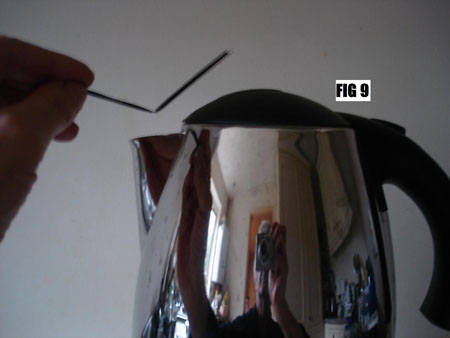 DO NOT HOLD IT OVER A BOILING KETTLE. IT WILL SCALD YOU AND IT IS NOT NECESSARY. The material will wilt and melt if you do so and and you will be burned. The slightest increase in heat will accomplish the task – and it will bend at the point where you made your nicks. Cut the chute 1 cm AFTER the bend at the foot of the chute.

6) You need a pair of handrails at the top platform. Measure up and cut from two bent sections of paperclip. The rail should be around .5 cm high (FIG 10). Glue in place. 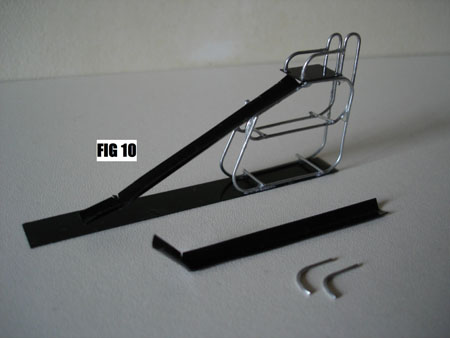 7) To make the support for the horizontal END of the chute, cut a piece of FP – 2.25 cm x 1 cm. Shape it (as in FIG 11). Score lightly along the bends with a craft knife to achieve sharp right angles. Glue to the base and to the sides of the chute. 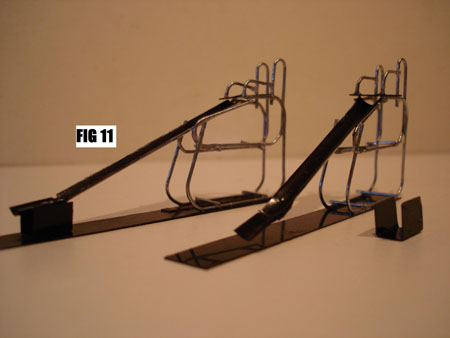 8) To make the ladder, first cut, bend and shape two sections of paperclip (FIG 12). Can’t give precise measurements because of the bend – just bear in mind that the ladder must incline at a comfortable angle, the bottom section must extend over the base and the top of it should slot in beneath the top platform. A little trial and error, snipping and fitting to the model will get the correct shape. When you’ve made one, make an identical copy. Check by laying one over the other. 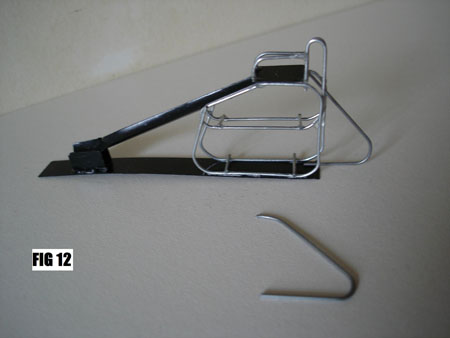 – The ladder slots between the uprights. It passes through them at the top to meet the top platform. Measure the distance between the uprights on your main structure. This will be the width of your ladder. Lay your ladder sides inverted on a squared craft mat if you have one (FIG 13) – make sure they are perfectly parallel if you don’t. Secure them at each end with plasticine or bluetack. 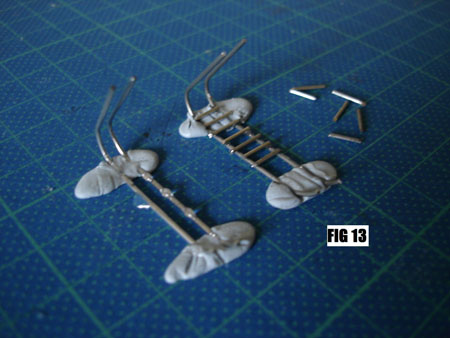 – Snip off plenty of ladder rungs from paperclips. Length? The width of your ladder. Make more than you need. They get everywhere.

– Glueing was a problem – had lots of failures. In the end I used superglue and dropped the rungs in one by one – to make a TEMPORARY fix (see photo). Once dry I removed the ladder carefully from the plasticine and touched in the joints with superglue to strengthen, handling carefully because the first application is fragile. Gave the joints a third application. Try Alex’s tip – or read the discussion in the comments on glue sent in after my SWINGS article. Distance between rungs? Half the distance between knee and foot (on an OO gauge chappie). If you’re good with a mini soldering iron (which I’m not), this model would be a doddle (which rhymes). 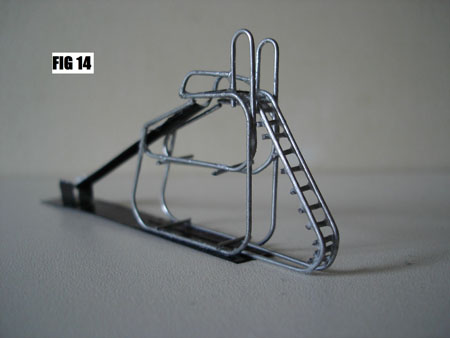 (10) Allow plenty of time for everything to set then gently scrape off any excess glue with a knife blade. Paint to match your swings and roundabout (FIG 15). Add children if you like. I think they make the model. Notice that the two boys in blue and green jumpers on one of the slides are in fact the same model! By thinking carefully before positioning your little people you can make them do things. The two boys at the foot of the slide appear to be preparing for a punch-up. And two identical model characters, cleverly placed can look completely different. The little girl in the yellow dress on the other slide should in fact be waving to her mum – but I glued her hand to the handrail! She is the same model as the two girls on the ROUNDABOUT in my last ‘how to’. 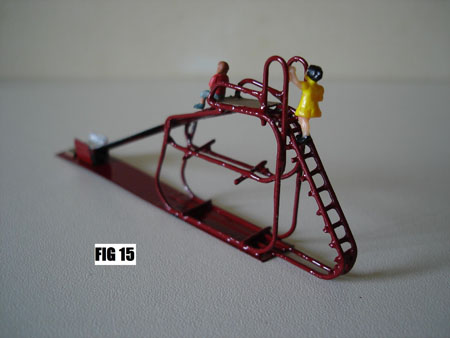 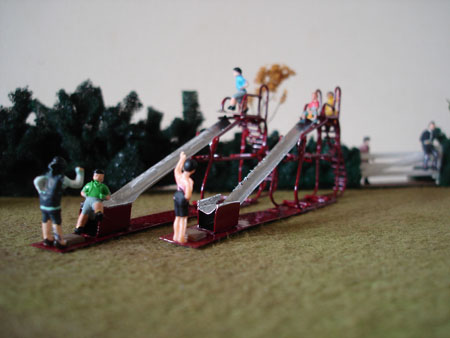 I made two slides so that could chuck away the least successful one – but in the end kept them both.

Don’t throw away failures and offcut paperclips because: –

FROM THIS MOMENT ON PAPERCLIPS SHALL NO MORE BE PAPERCLIPS – BUT OO SCALE PREFORMED TUBULAR STEEL.

Best wishes to everyone.

Any one can see how much time and trouble Roger has gone to with this ‘how to’. A big thanks to the talented Roger.