“Hi Al: First of all, let me say THANKS for the years of tips, tricks and ideas emanating from your emails and other modeler’s creative thinking.

I have only been modeling (N scale) for about 5 years, including a year in Iraq (fortunate enough to have my own ‘hooch’) and four years in Japan, where my wonderful wife allowed me a whole bed room to model and run trains.

As is the experience of most modelers, I feel I have been blessed with improved modeling skills over the years and would like to share an idea I haven’t seen in print anywhere else, and that is the idea of ‘Platform Modeling’.

It is a simple and very easy to work with system, and I hope most would agree, comes out with pretty good result (see a couple of pictures I have sent along with this narrative).

Here is how it works:

After you have your track laid, you begin by outlining a template (on a piece of paper) of the area you want to model. I try to keep the templates for the platforms to a manageable size, as they need to be somewhat portable to move them from work space to layout and back again until you’re satisfied with it, and finally place it ‘permanently’ on your layout.

After the paper template is made, I use it to cut out a thin piece of styrene or sturdy cardboard. Cardboard box is NOT suitable (too thick). But I have a friend who keeps me well supplied with cardboard dividers (thin sheets used to separate dry goods for shipping in bigger boxes) and glue two of these together.

Using these cardboard sheets also facilitates easy wiring as poking a hole through the platform and taping the wires to the bottom is very easy to do.

And that’s about the end of the story, because once your cardboard platform is ready, all that is left is to scenic it, which can be done anywhere because of the portability.

Anyway, hope the pictures help explain, and thanks again for your postings. Please don’t quit. 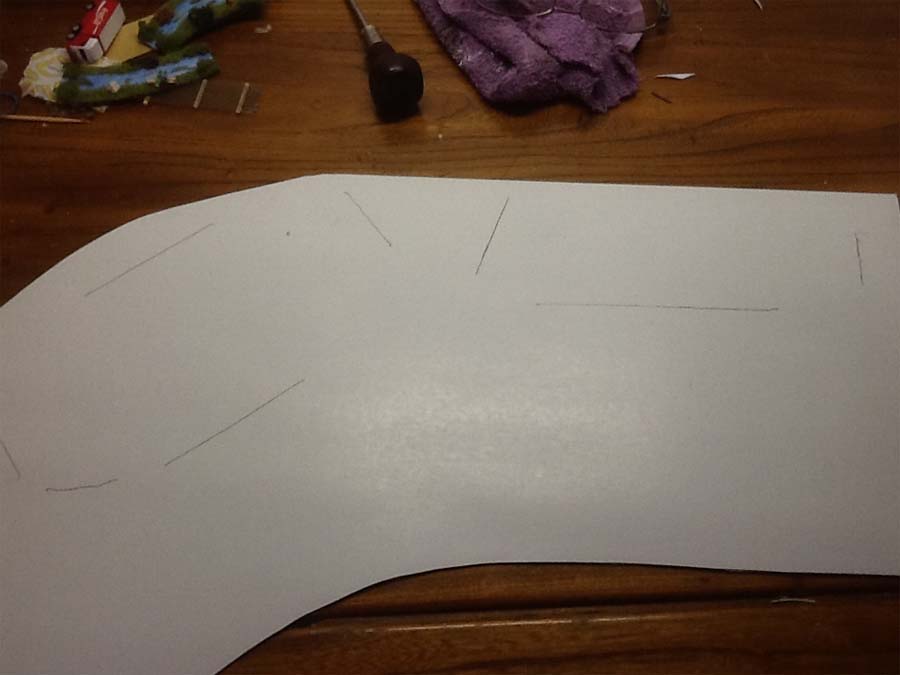 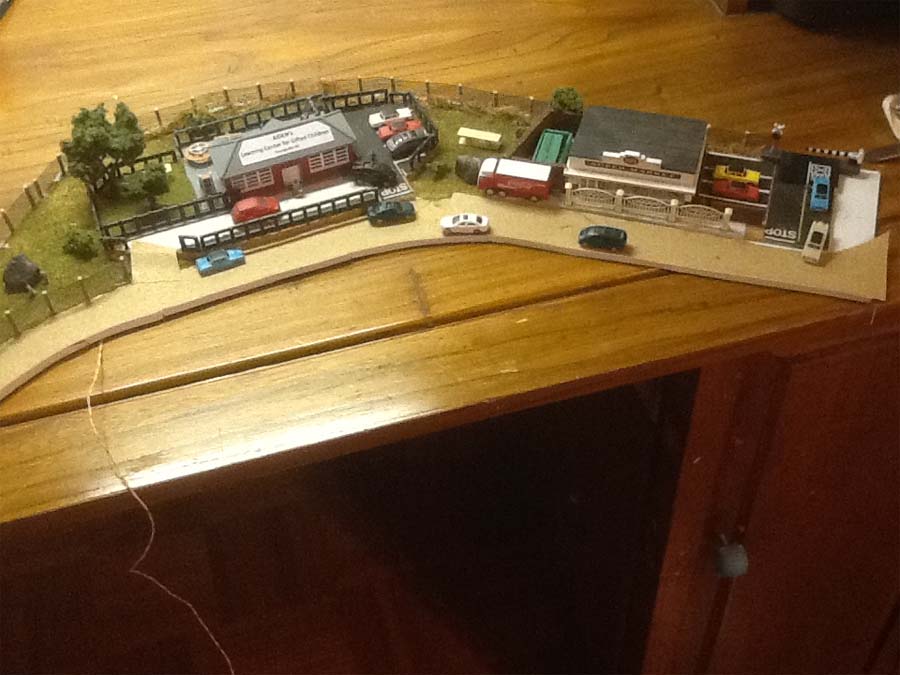 Happy to see you are drifting into the larger gauges. While I maintain an N gauge layout in my basement, I put on at least one display a year using Lionel Standard Gauge. It is part of a large display by the Bergen County Model Railroad Club. But dispatched ahead and attached are photos of a Standard Gauge setup being constructed slowly, a speed dictated by the fact it is 107 miles from my home and must be done on a time available basis.

Lionel Standard Gauge was produced from 1906 to 1939 and is 2 1/8” between the rails. It is a toy, thus, scale is not much of an issue. It is now back in production, but as reproductions of these ancient toys with more modern electronics including smoke and sound. It is all metal and thus, heavy, allowing it to make sufficient noise without help.

This layout is located in a large basement in rural Pennsylvania, USA. It was started for a friend who had built club display layouts with me for years. He passed away, having reached into his 90’s, last year, but this project continues to allow his family to enjoy his large collection of mostly antique trains, as they should be enjoyed, running and producing a tremendous amount of noise. Santa delivered his first train in the mid 1920’s.

The major issue faced in this location is that the ceiling is low and large ducts hang under that. I cannot stand up in most of the basement. Worse, the large air ducts hang over the layout were an eyesore. The solution was to cover them with clouds made of fire-proof pillow stuffing (Polly fiber).

The standard gauge operates on two loops, one a dog bone, going up and down 3% grade three levels. The second runs around the base rising only to reach a set of cross overs which connect the two lines. A storage yard is on a second table at right angles to the operating area. It is connected by a Y to the mountain line at mid-level. Above the standard line is an O gauge line which at one point goes though the clouds.

In these photos the locomotive is a reproduction by MTH of the classic Lionel 400. It is about 20 years old. The cars, however, all date from the 1920s. For years this train pulled by both reproductions and antiques, ran on the annual club display, built in three weeks each winter with an equal grade roaring up and down a hill with a train of 17-19 freight cars with a caboose.

Controlling antique locomotives, which use a pinion drive, on a hill is a major issue. They will take off when they go over the top. Some, shut off, would just role to the bottom of the hill. Thus, unless controlled by an operator who is never distracted, such layouts must be wired to two circuits one up and one down carefully set to avoid too much speed as it crosses the summit and starts down. Keeping heavy locomotives on the track is sort of important. This is not an issue with the reproductions. 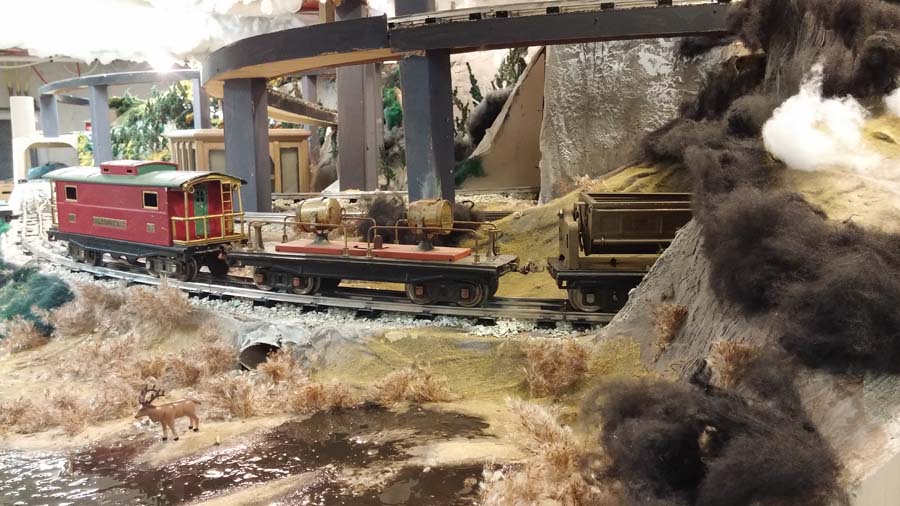 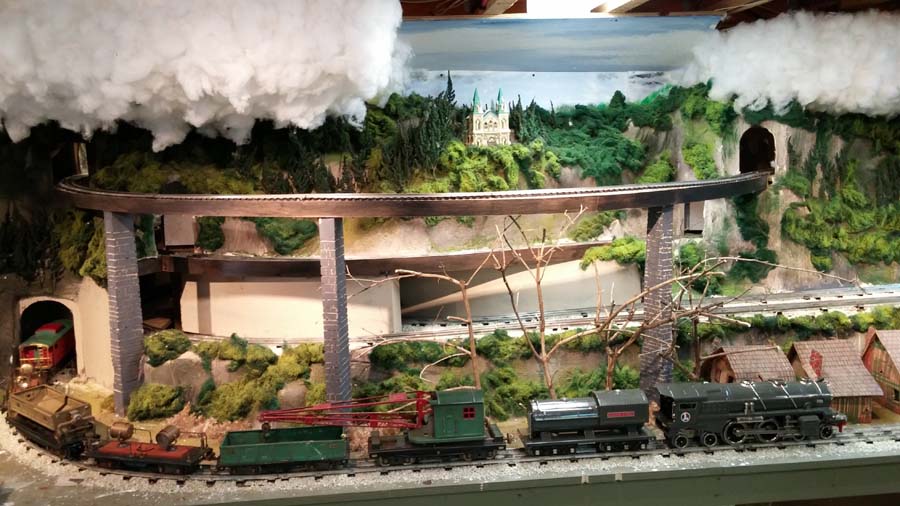 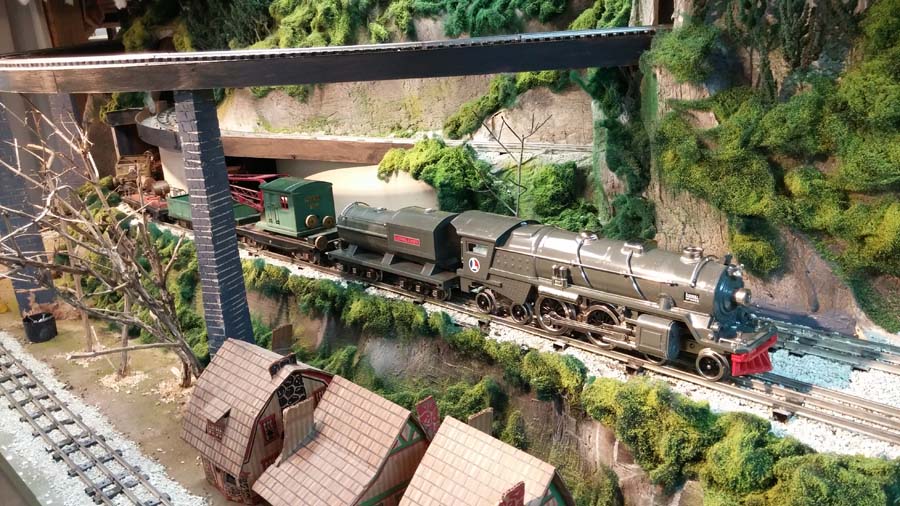 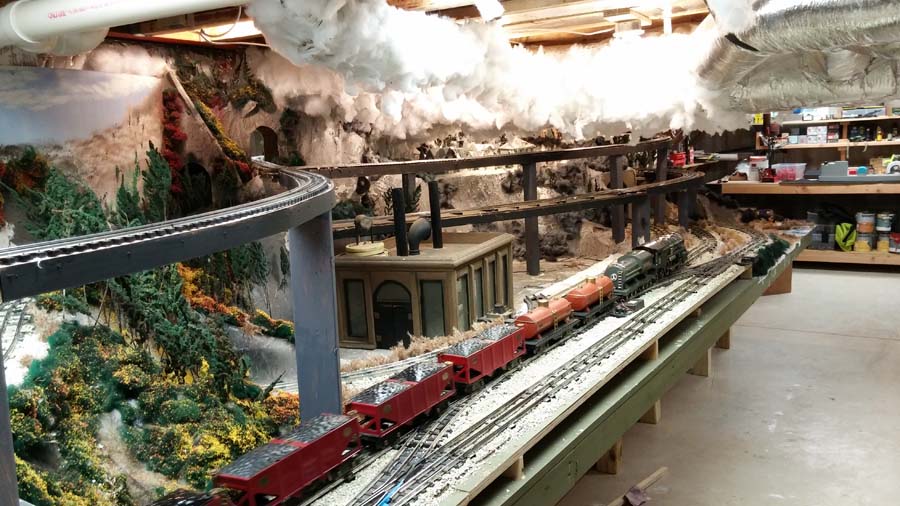 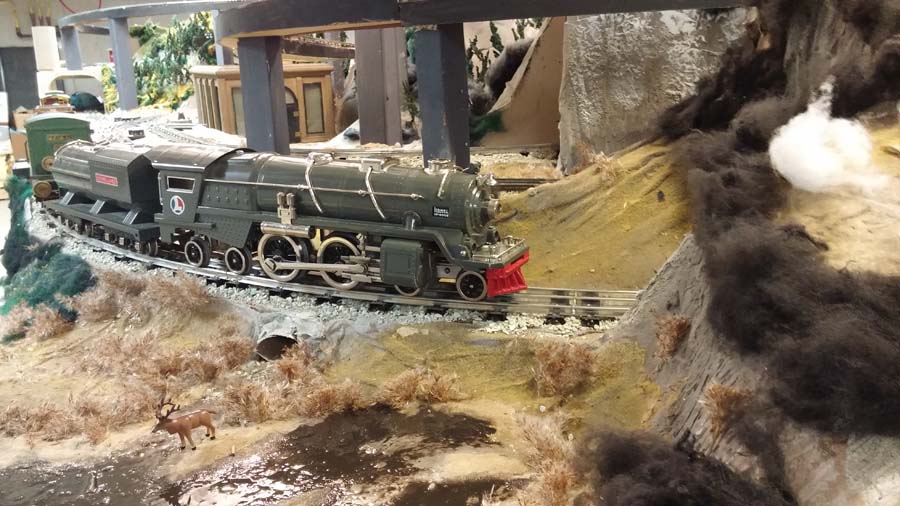 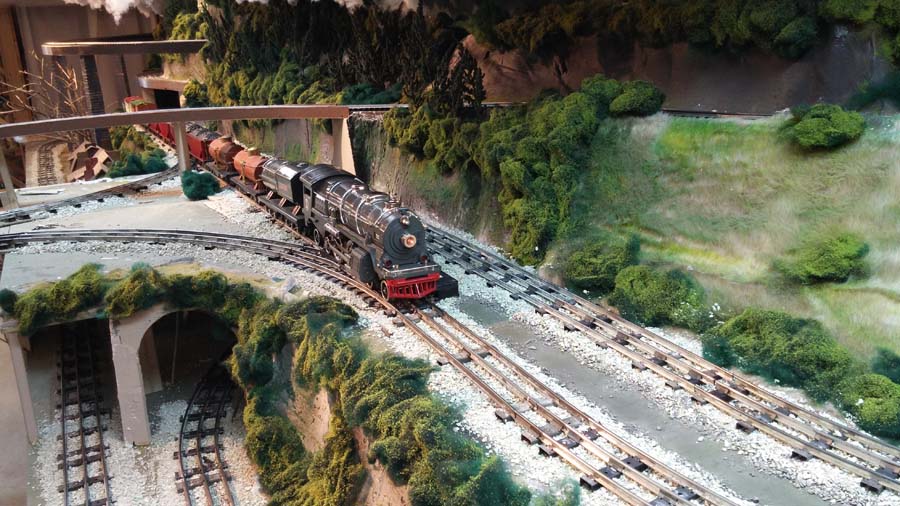 Two fantastic posts today. A huge thank you to Gary and John.

By the way, I don’t mind the larger scales at all – it’s just that not that many are sent in. So if you’re sitting on one, you know what to do.

And it doesn’t matter what scale takes your fancy either, there are more great tips and ideas in the guide. Have you taken the plunge yet? Why not give it a whirl and see what all the fuss is about.

Latest ebay cheet sheet is here (Thank you for all the comments).