“I’ve been a fan of your blog for several years, and have learn so much from the contributors. I look forward to opening my email each day to see the wonders you send forth.

I’ve been working on my Murren and St. Goar Scenic Railway since I returned from a trip to German and Switzerland in 2009.

I wanted to recreate views and moments from that trip in HO scale.

I’d not done any railroading since I was a teen back in the 1960s, so it’s been a real experience relearning everything.

t’s encouraging to read posts of others who have questions and made mistakes we can all learn from.

My submission shows a small addition to my city (based on Freiburg, Germany) three streets off the Main Avenue.

There was a block of empty space left over from other building installations. I’d debated what to do with it for some time, and finally decided to just tackle the space with basically what I had on hand.

Our recent stay in place orders here in Michigan have provided many extra hours of time to ponder and work on train projects.

I tend to work on my layout in an organic fashion, and have found that I greatly admire those modelers who can build a layout with all those yards, mainlines and switches.

I’ve also learned that I’m not very good at that part of the hobby.

What, it turns out, I really like is doing building kits and creating landscapes for the train to run through.

Your blog has reinforced that there is no “right” way to do model railroading, and that ideas can come from any source.

Attached are several pictures showing the progress of the city block addition from start to finish. 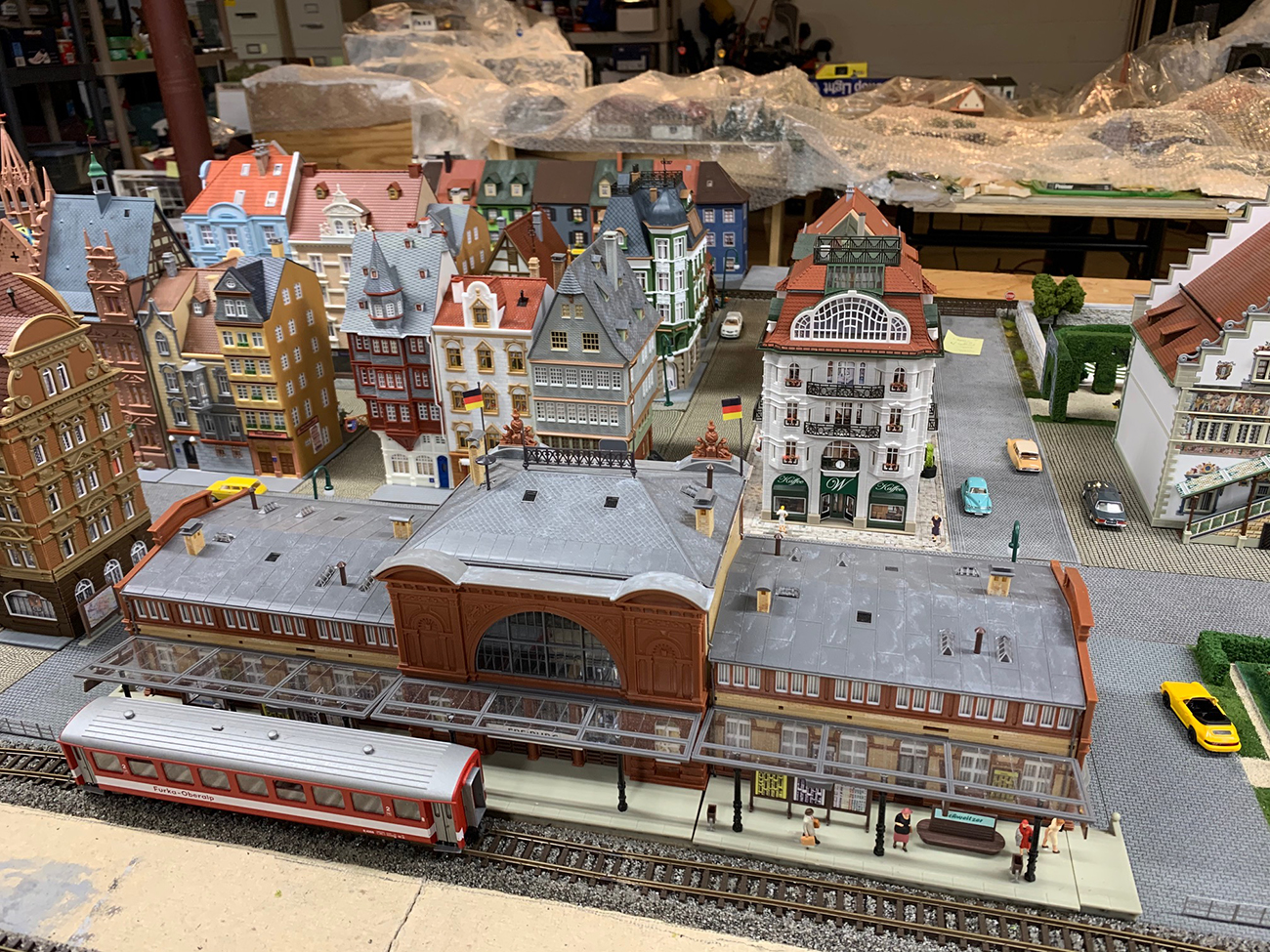 View from the main station looking back toward to area where the new block addition was added. All the city buildings are lighted for night effect. 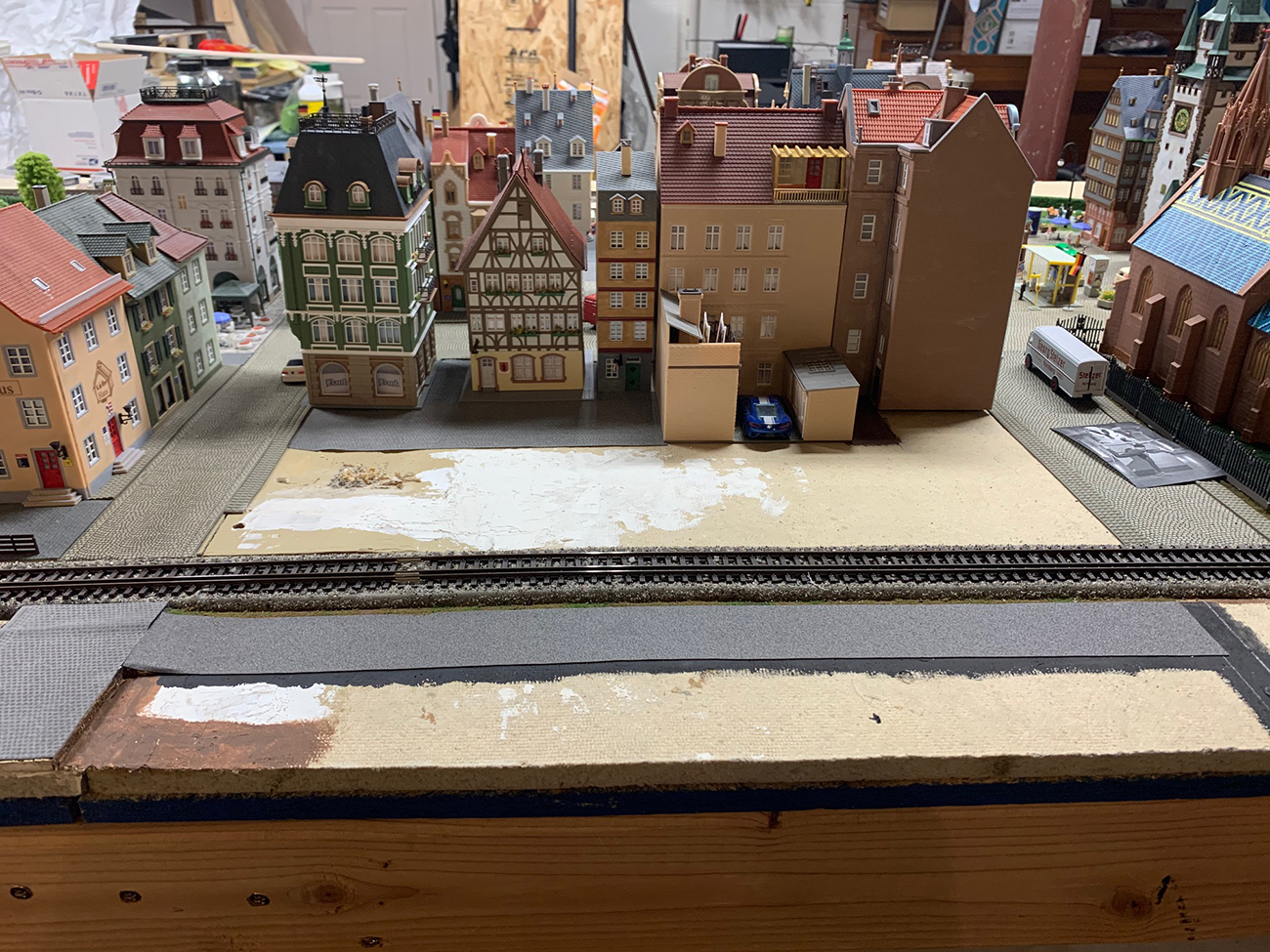 The block as it looked before I started. The backs of the buildings on the facing block provide the background. I added a narrow road opposite, next to the tracks as a first step. 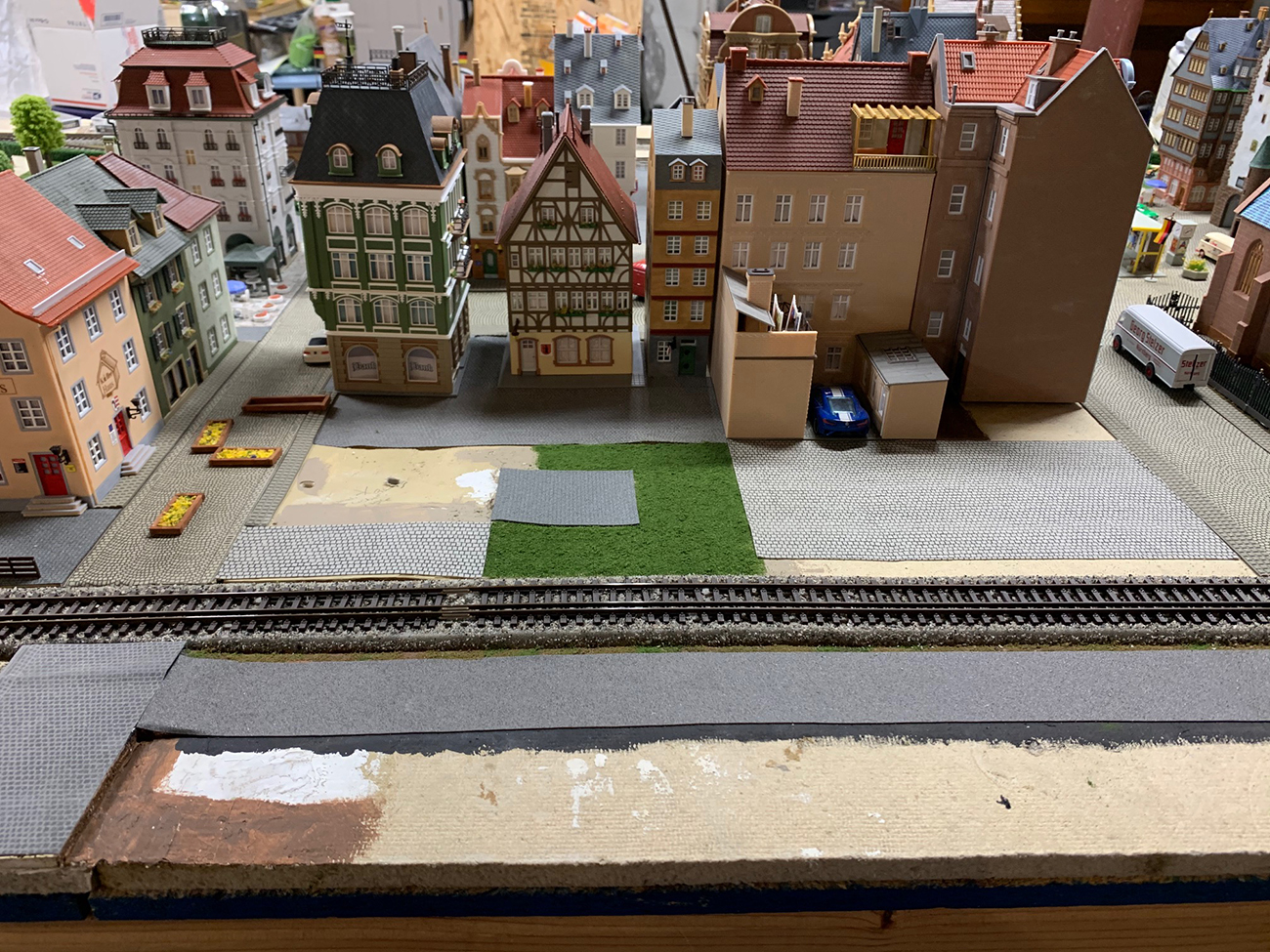 I first added some grass for a small park which is to set behind the building on the block corner. Then I added stone paver sections to create a courtyard as seen in many German cities behind buildings. I found, and assembled a building kit that allowed a drive through from the side street into the courtyard to anchor the other end of the block. 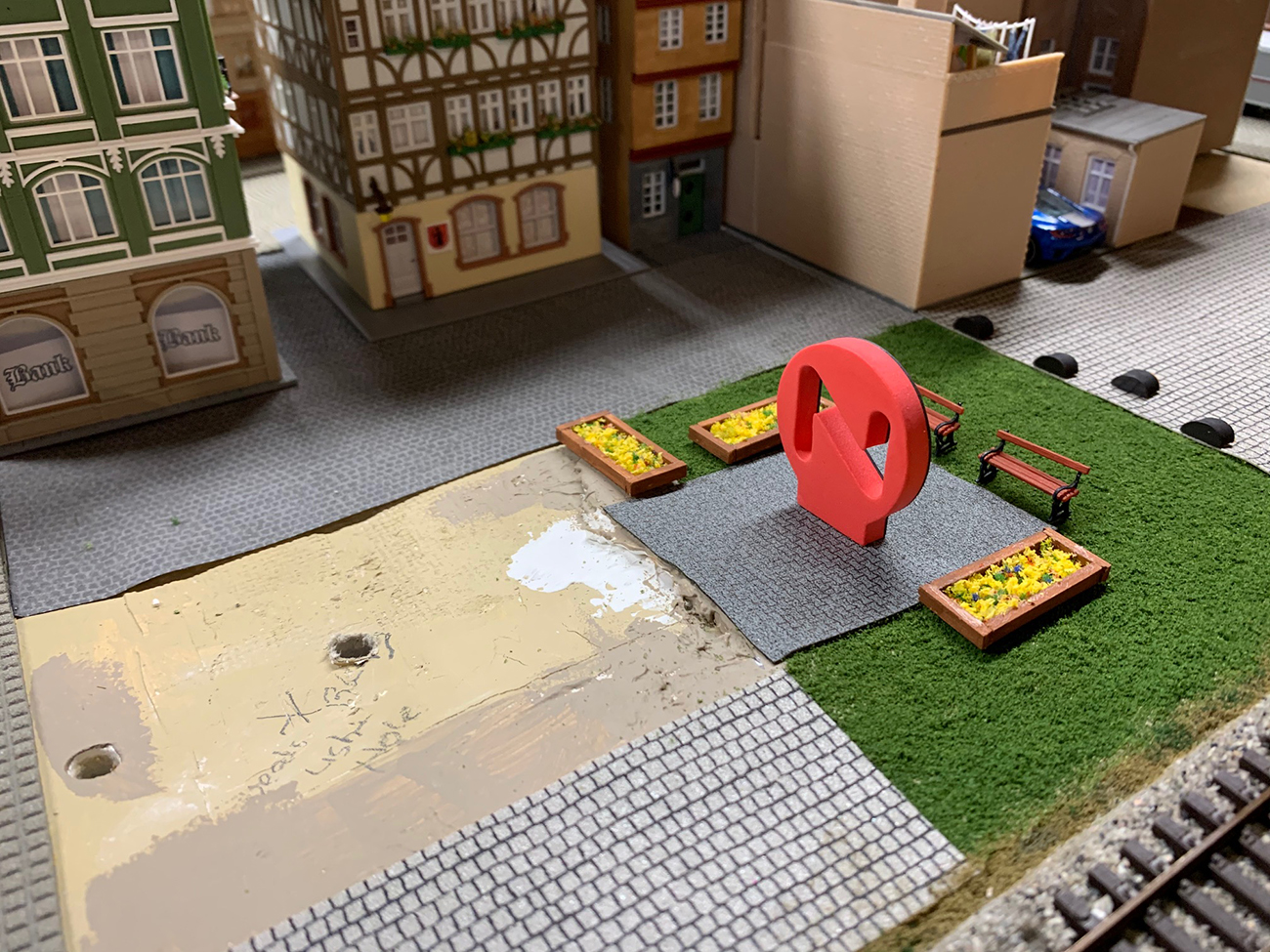 I built some simple planters, added benches and found a sculpture piece for the park. My youngest daughter teaches first grade so she has many craft and classroom items that can be adapted to the layout. In this case the sculpture is a throwaway piece from a lettering kit. 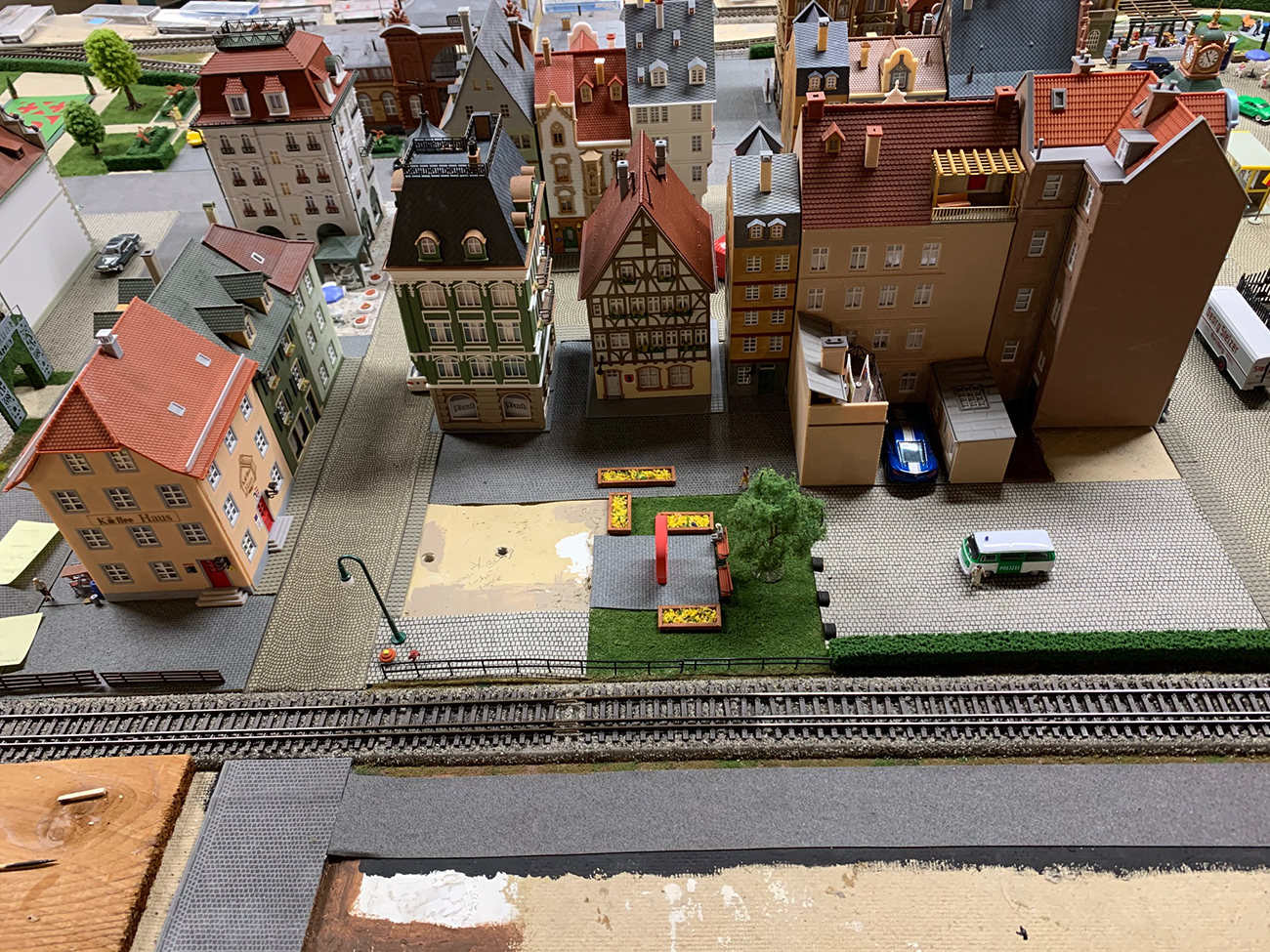 Next I added some people, a tree, a hedge and a fence next to the tracks. These were all left over parts from other scenes on the layout. 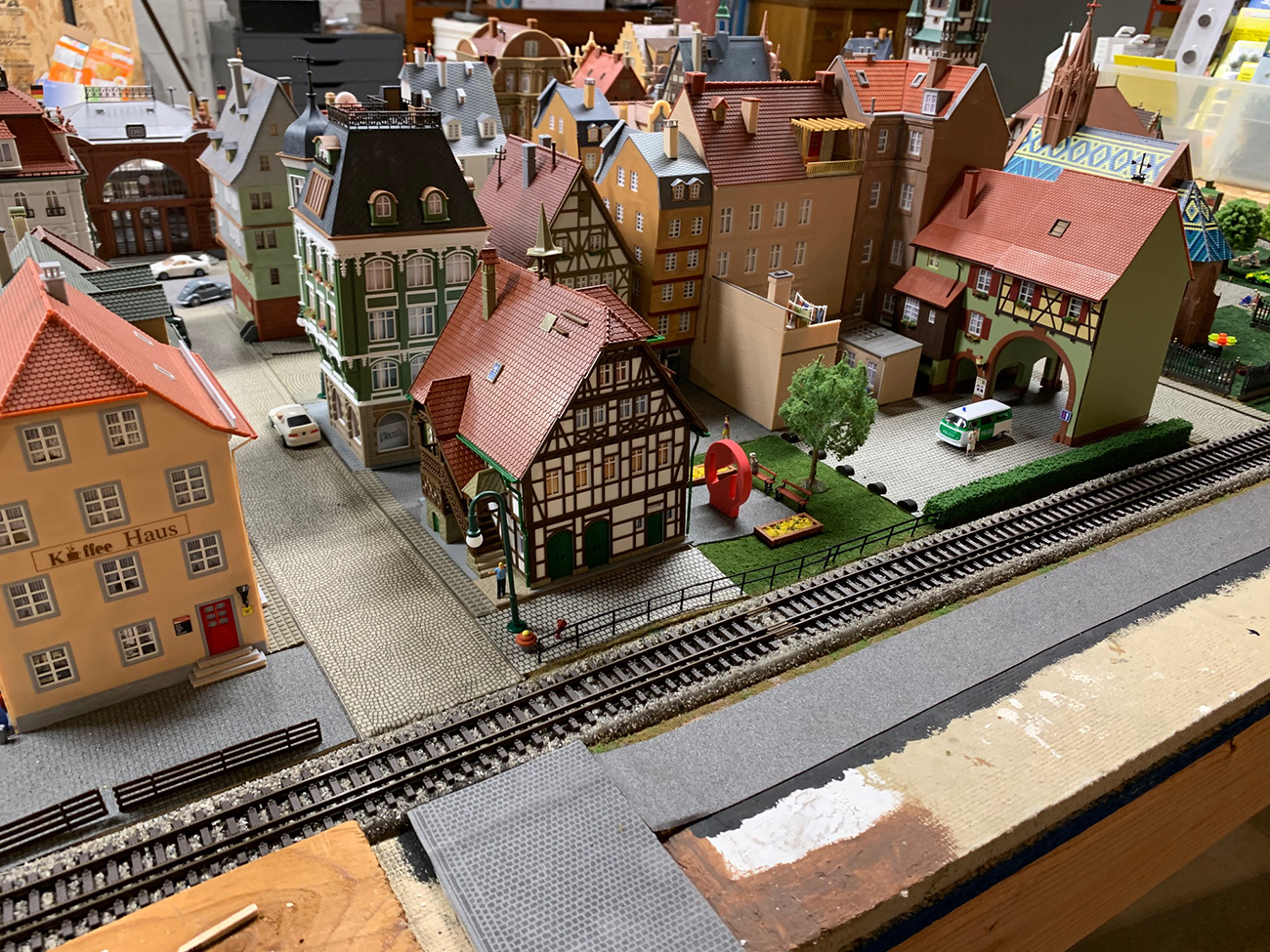 Then I added the two buildings, one at each end to enclose the block. One building I already had built, but did not use for a different scene, the other was purchased to allow the drive through into the court yard. 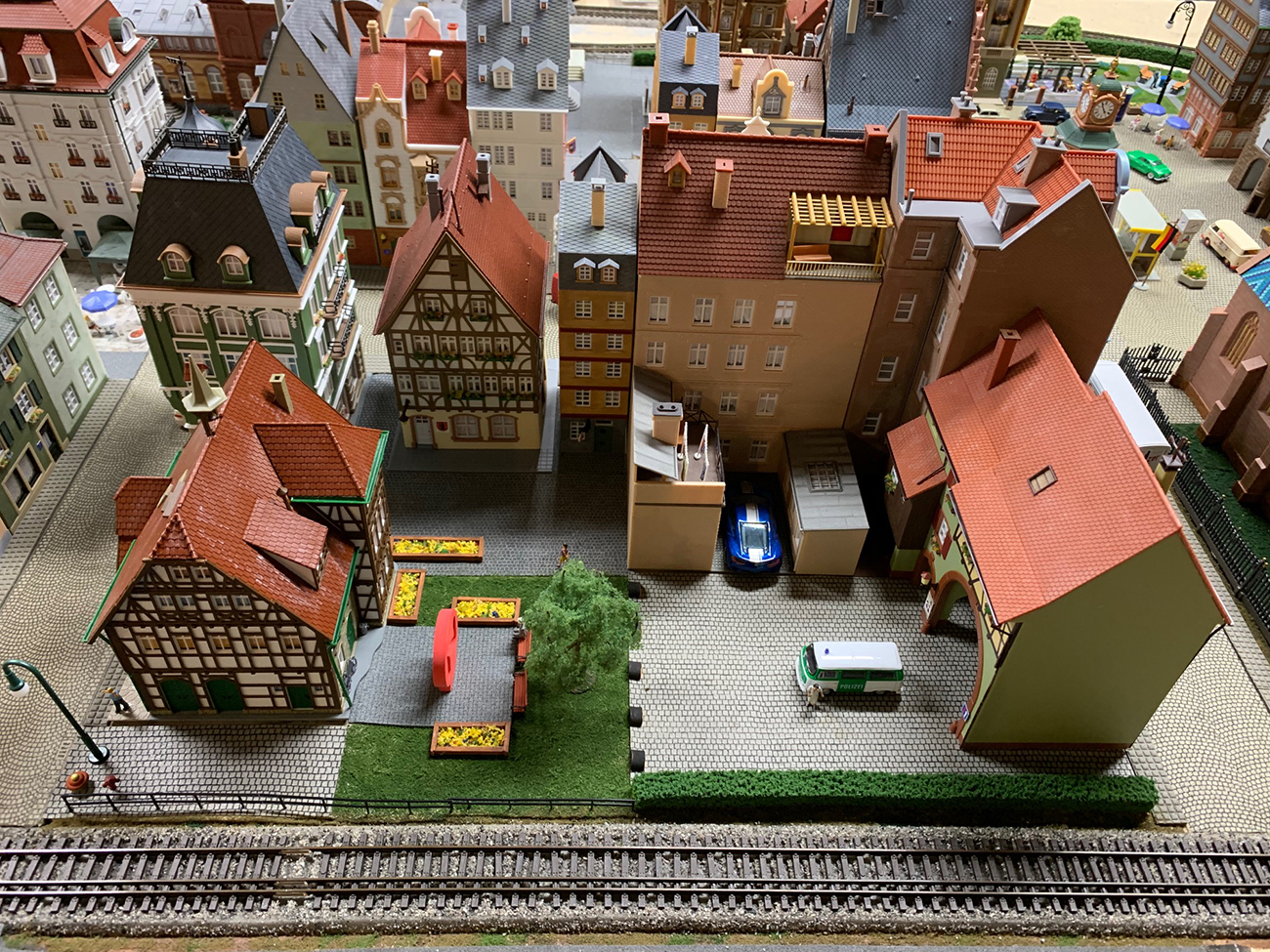 View of the completed block. 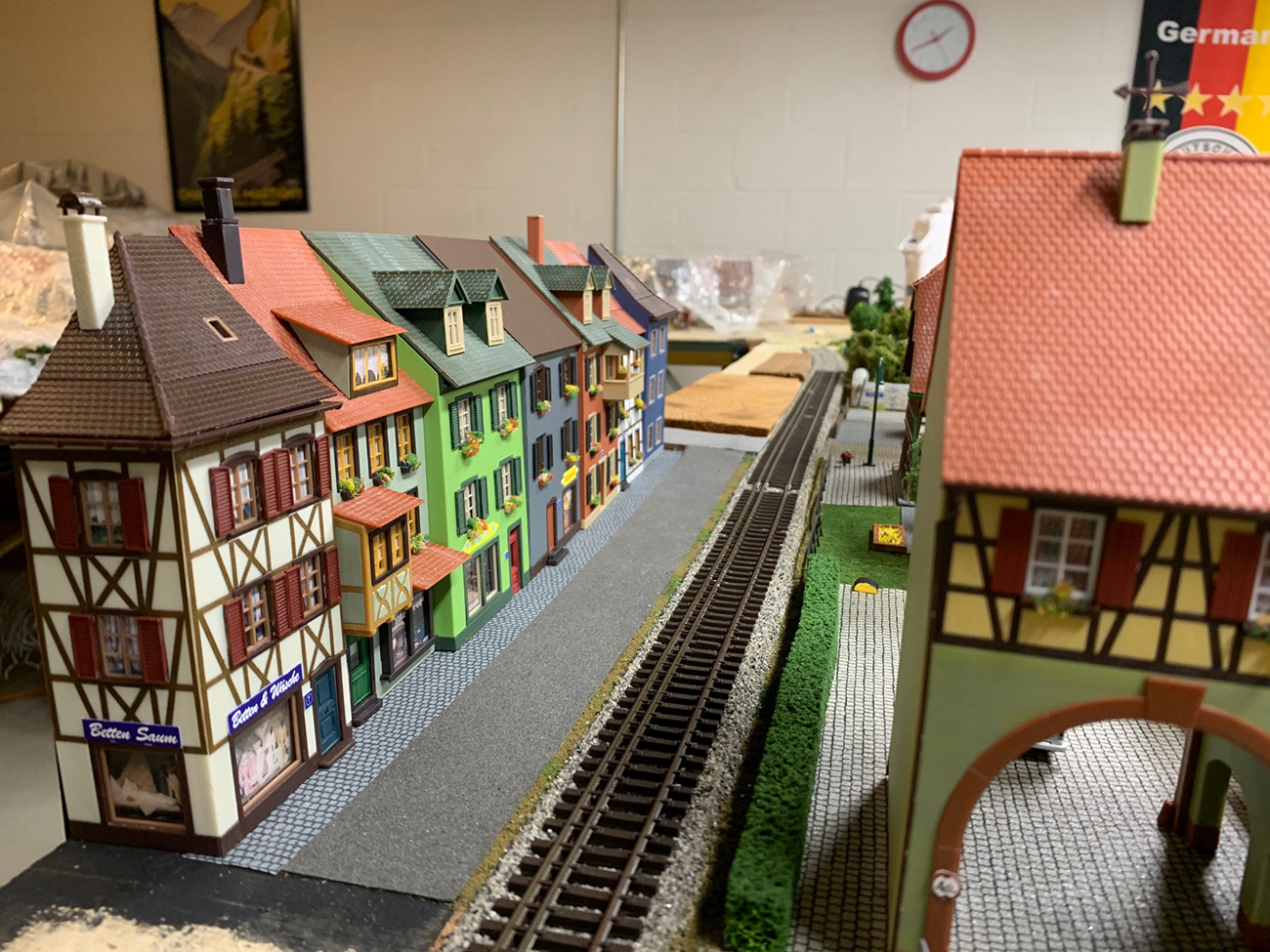 Wwith the recent article on how to finish the edge of the layout causing some discussion, I decided to try adding buildings across the street on the other side of the tracks. I purchased a set of kits for those half facade buildings that one puts up against walls. Only I don’t have any walls so I just placed them on the table edge and put a backing board behind them so they won’t fall off. 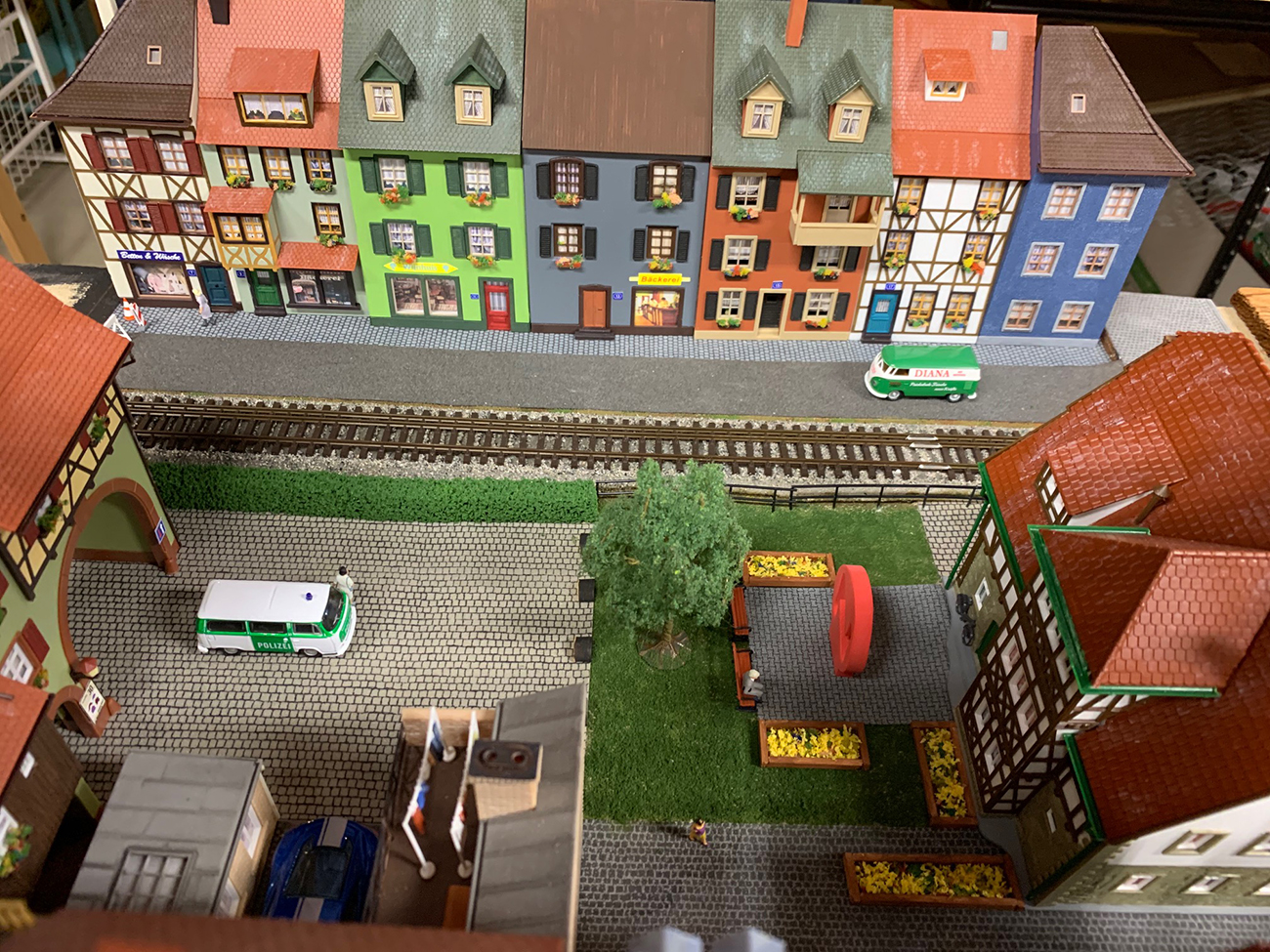 I colored this row of buildings based on those I saw in Innsbruck on my trip to Switzerland this past summer. The middle building on the block is make up from leftover parts from the other kits in the set, and allowed me to fill the space completely.

I hope your readers fine them interesting and even useful.

“Hi Al ..Just loaded this video to answer a few of the queries regarding my inclines and how steep they are in % , and of course showing how those magnetic couplings do hold even with a rake of 6 coaches on the inclines.

I would also like to thank all who sent there best wishes for my wife’s Deb (aka the Stig ) recovery with her hand.

I did eventually get her to A & E and with a Xray showed she has a broken wrist, so looks like Dave is going to be busy in the home for a while yet…

A big thanks to Dave and Rob.

Votes for the scratch building competition are still dribbling in, so I’ll announce the winner on Friday.

And don’t forget The Beginner’s Guide is here if you feel like you are missing out and everybody else is having all the fun.