Knowing that we would be moving in the future, I built it as four modules. With that in mind, I went as far as I could but stopped at major landscaping as I didn’t want to cut it apart when it came time to move.

The layout is all DC.

That move became a reality in April and so the layout was broken into its four components.

The new house has a 25’ x 25’ shop and I have placed the layout in ½ of it and my workshop, with its power tools, saws, etc. on the other half. I made a curtain out of 9’ x 12’ tarps to pull between the halves when I use the saws and stir up a lot of dust. 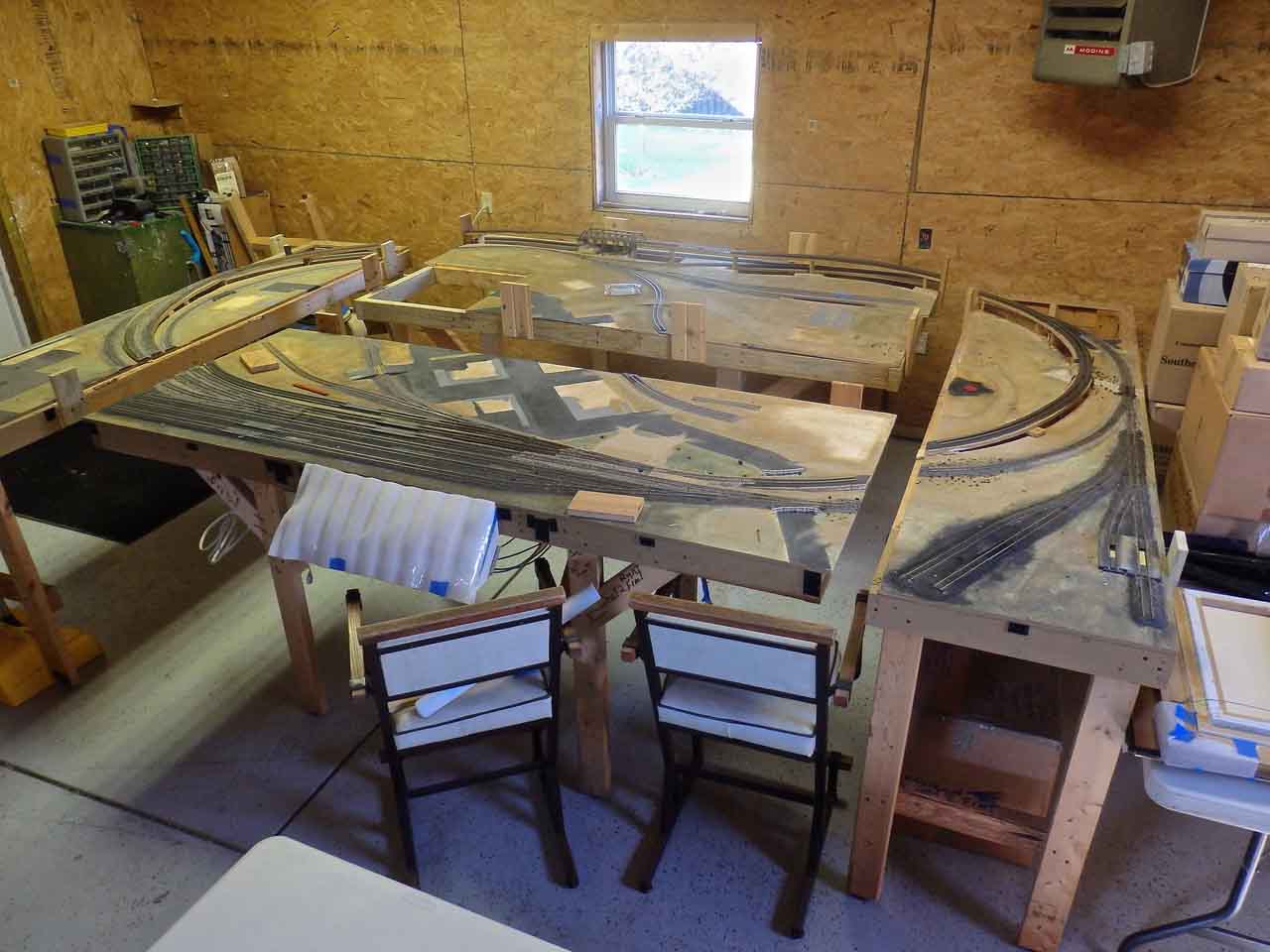 Here is how it looked initially. There was a lot of leveling to be done as the shop floor was poured with drainage in mind (so it could be hosed out, something I won’t need to do).

Fortunately, I built it with screw adjusters on each leg. That being said, there were some legs that had to be adjusted by removing and re positioning the leg higher or lower on the layout frame. 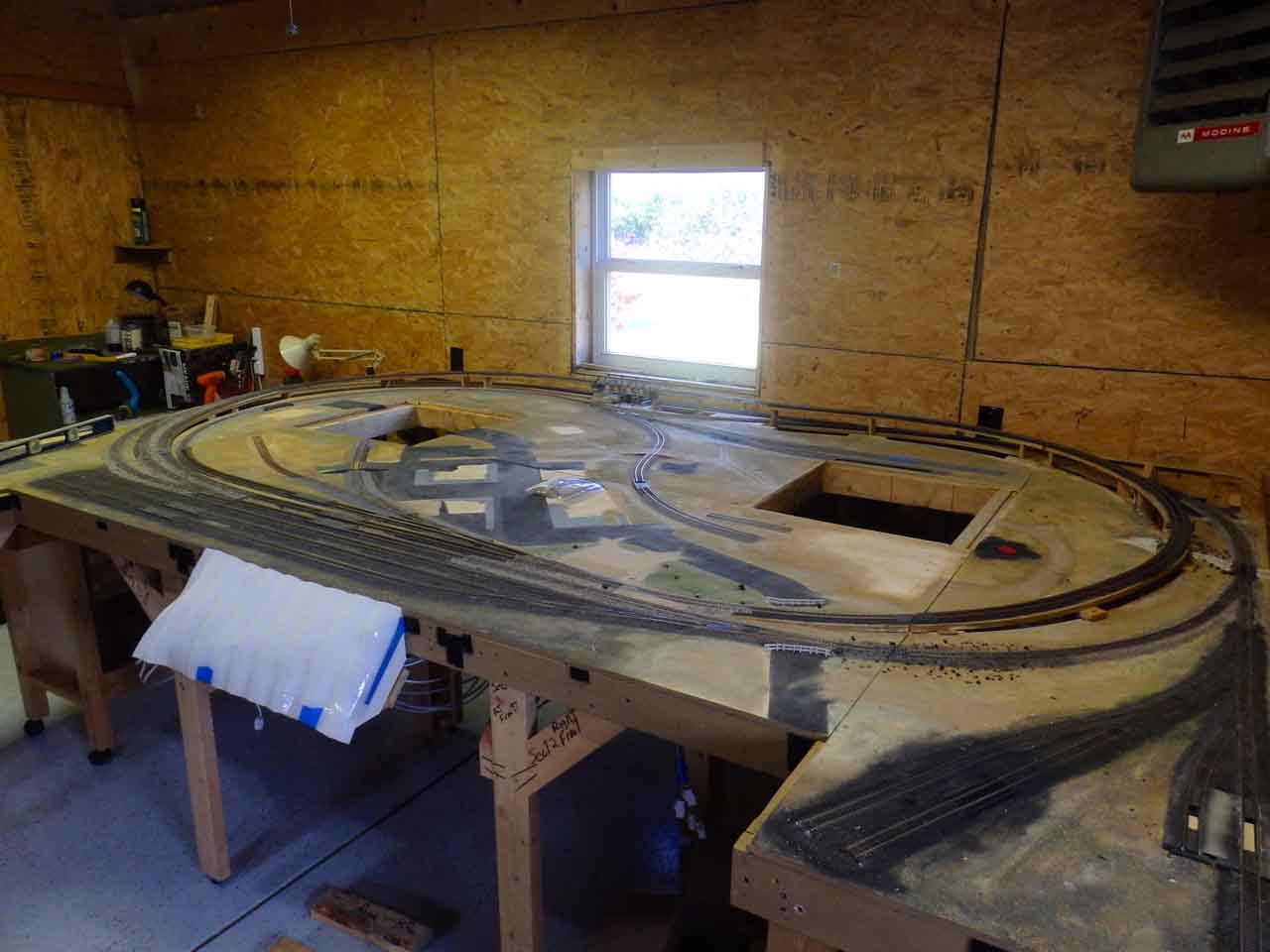 Here it is in position, leveled and cross-bolted together. 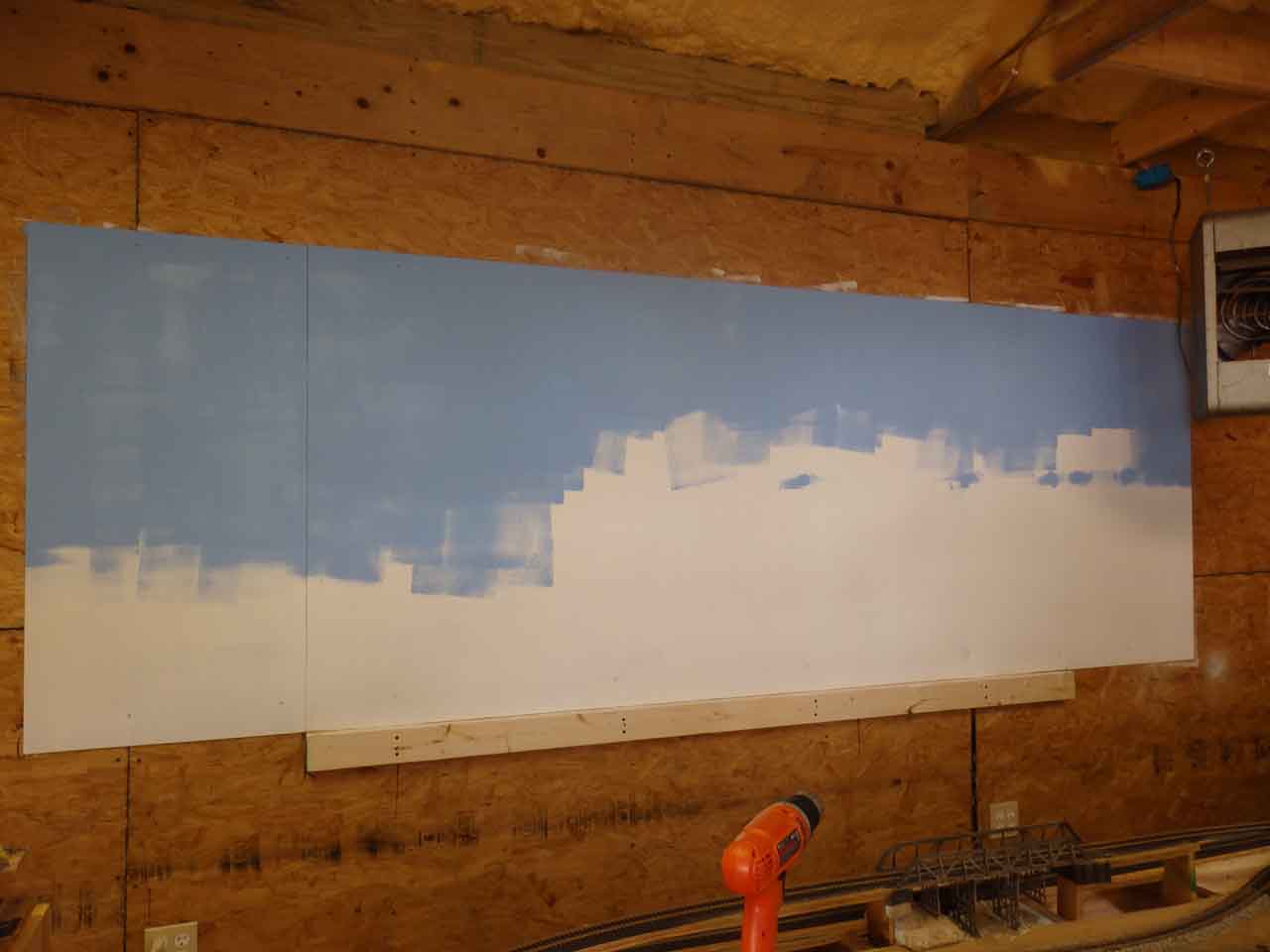 I watched a DVD on how to paint a backdrop and here is where I began.

The railroad is freelanced, late steam prior to 1950 set roughly in NW New Mexico. The town is San Juan Creek (named for the San Juan mountains of that area).

The local shortline is the San Juan & Central. Major industries include San Juan Coal and San Juan Lumber; both own and operate their own branchlines.

There is a saw mill, a planing mill, oil distribution center, a small cattle ranch and beef processing plant. Various other normal businesses are also included.

Here are some pix of the early work. 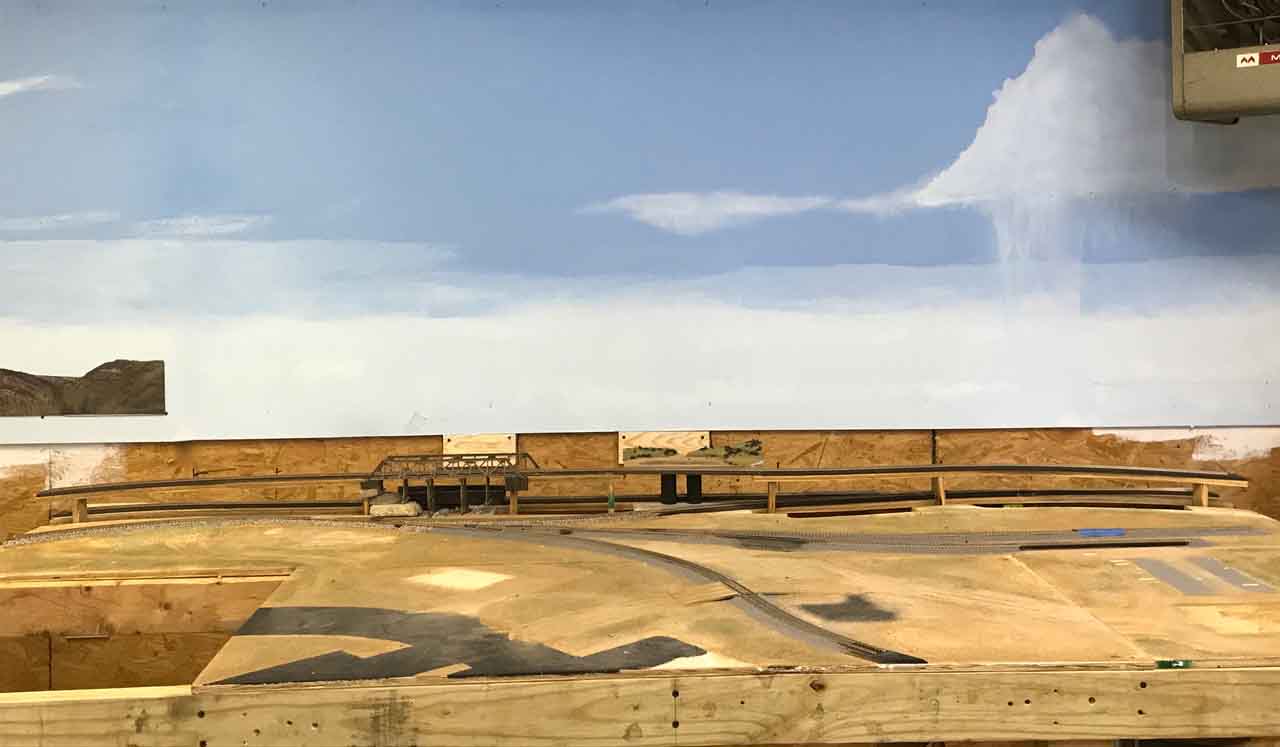 Here is the finished backdrop. There was so much touchup to do on the right side that I decided to put in a storm cloud and some rain.

Backdrop completed, I begin to “imagine” how the scenery will develop. I was/am really pleased with how the backdrop turned out! I’m NOT an artist! 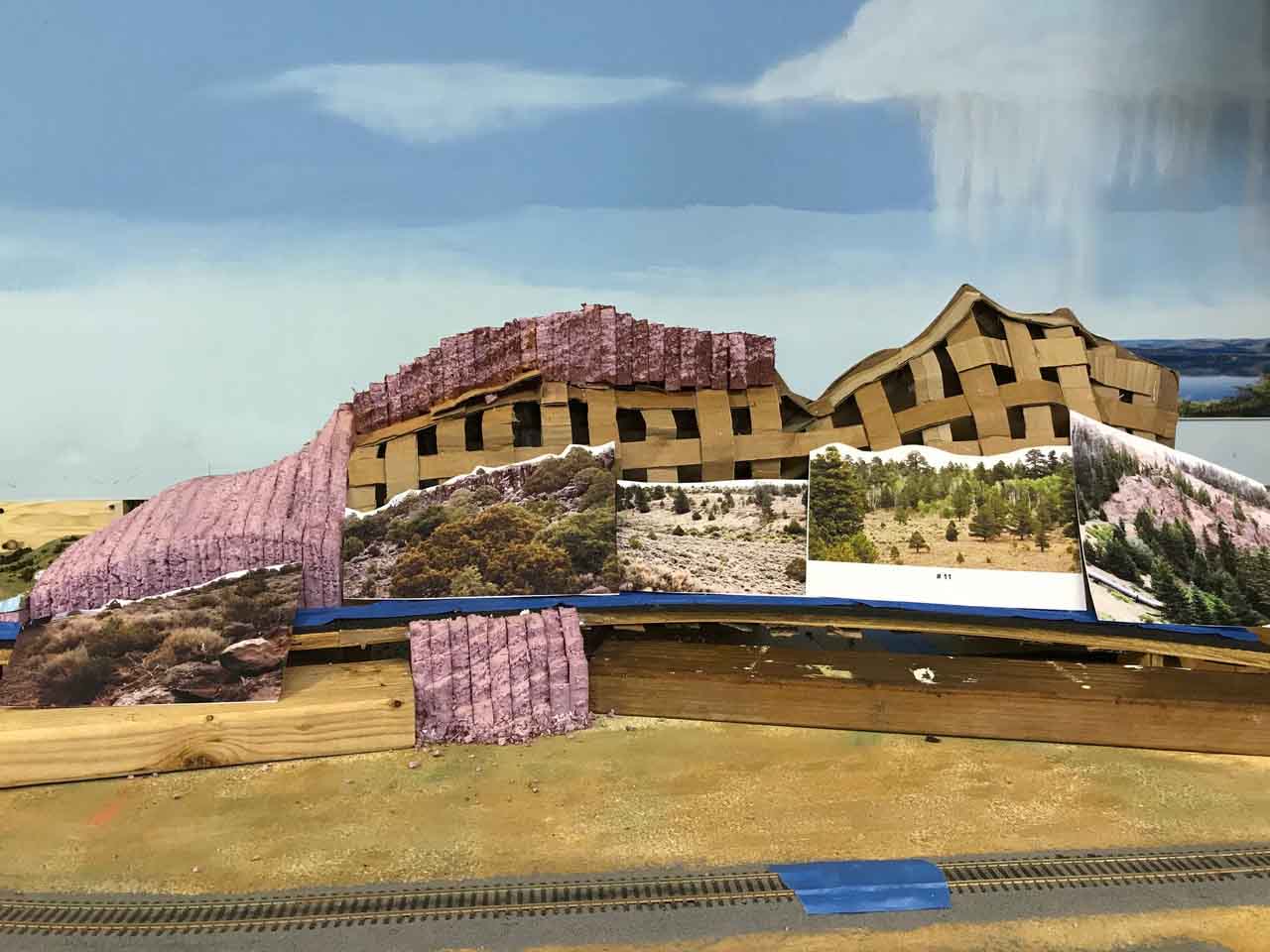 Getting there. Beginning to look similar to the mock-ups.

Once again, I separated the four modules before I began working on the mountains as it was easier than trying to do this with it against he wall. Being able to design and construct from the rear of the layout really made it all the easier.

We rode the Cumbres & Toltec in 2013 and there is where i based the scenery. I printed out some of my 400+ photos and used them as “inspiration” for the mountains, etc. 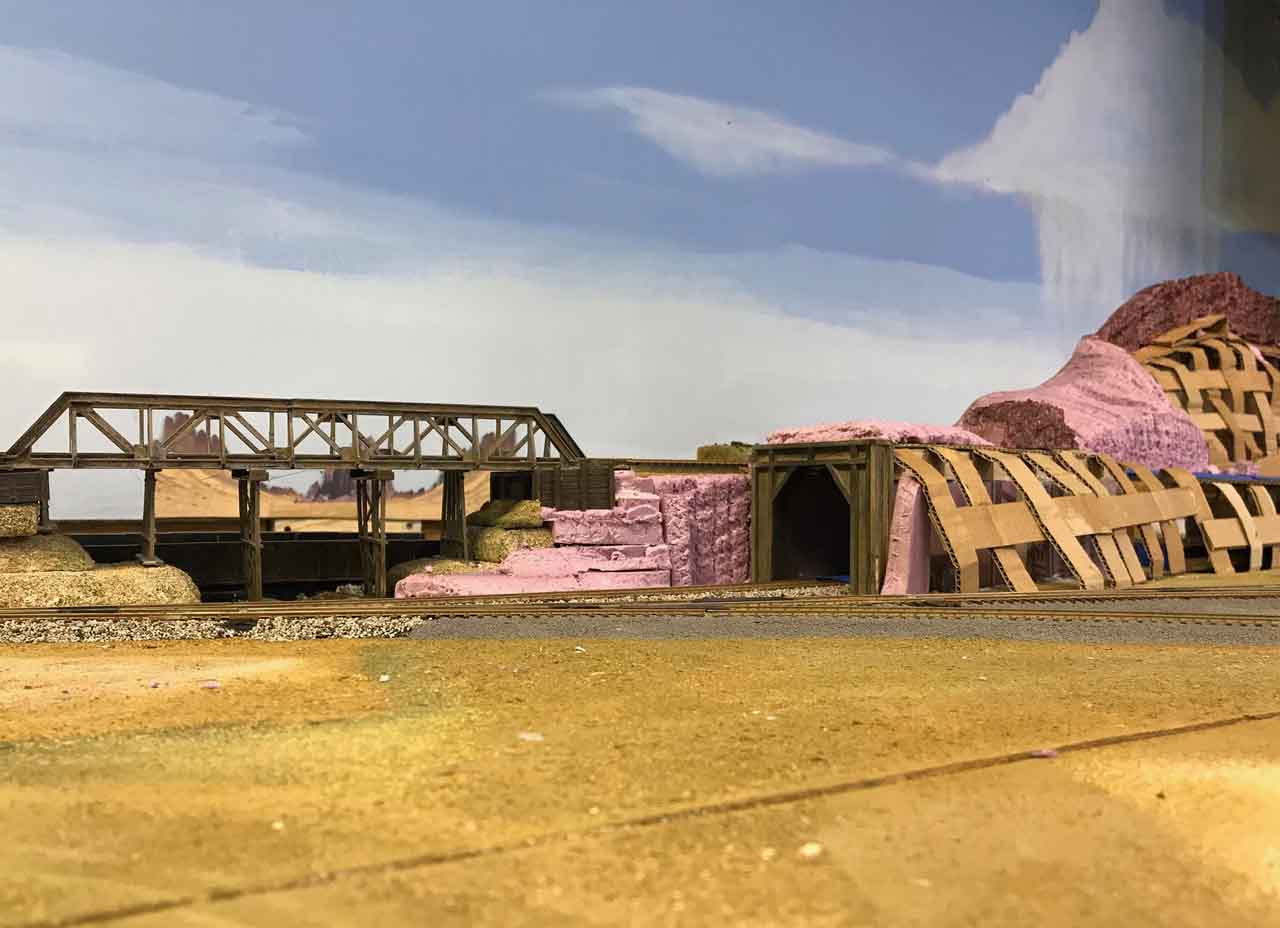 I started by thinking I would use 1” foam insulation for the mountains but after about 1 ½ ft, realized I would use the old “tried and true” procedure as you can see and use the foam board for details/outcroppings. Yes, that is “Shiprock” in New Mexico behind the bridge. 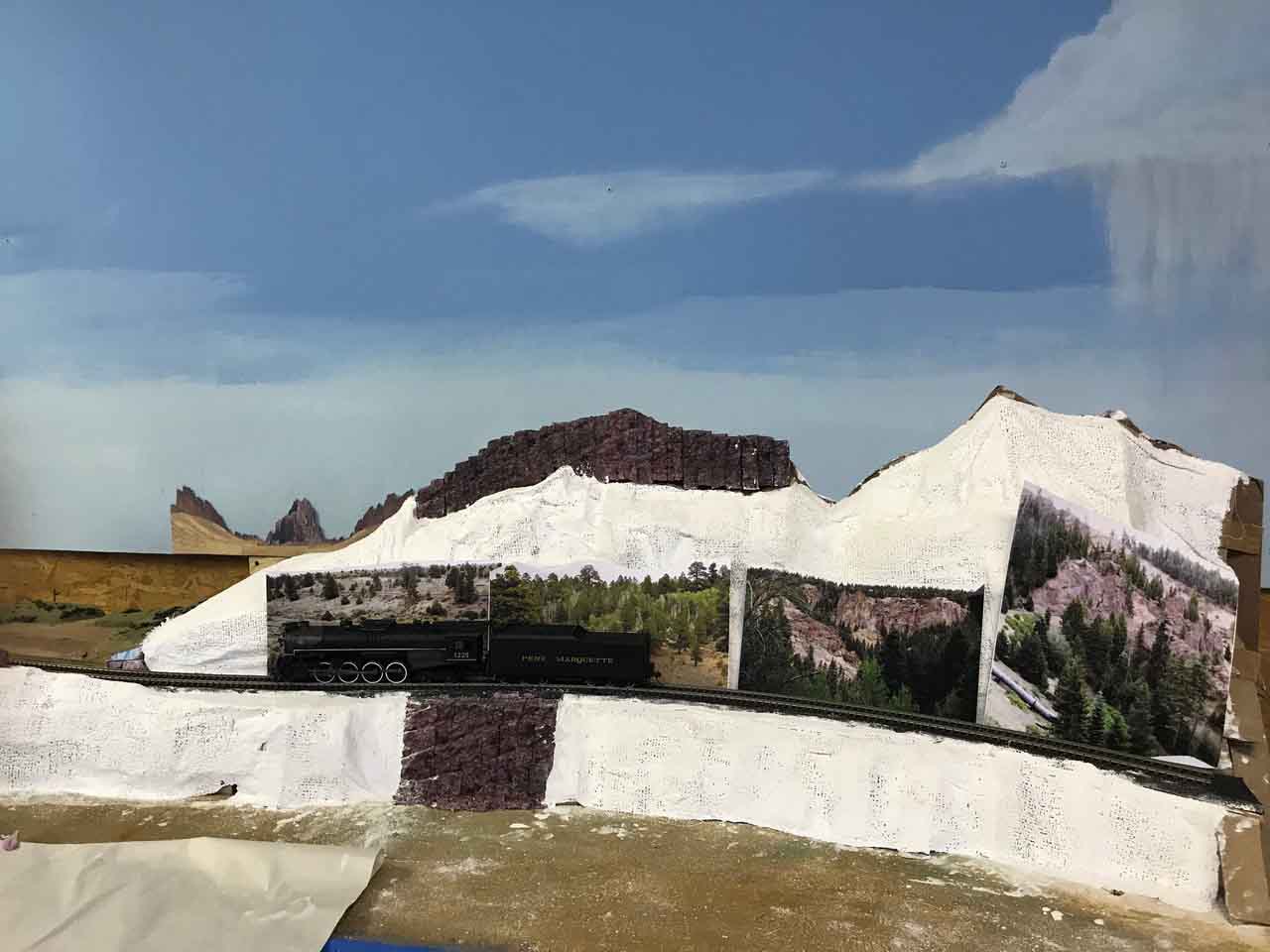 As mentioned, I went “old school” on the scenery. Plaster cloth over cardboard webbing followed by sculpture-a-mold, paint, texture and more paint. I continually referred to my area photos for color, etc. 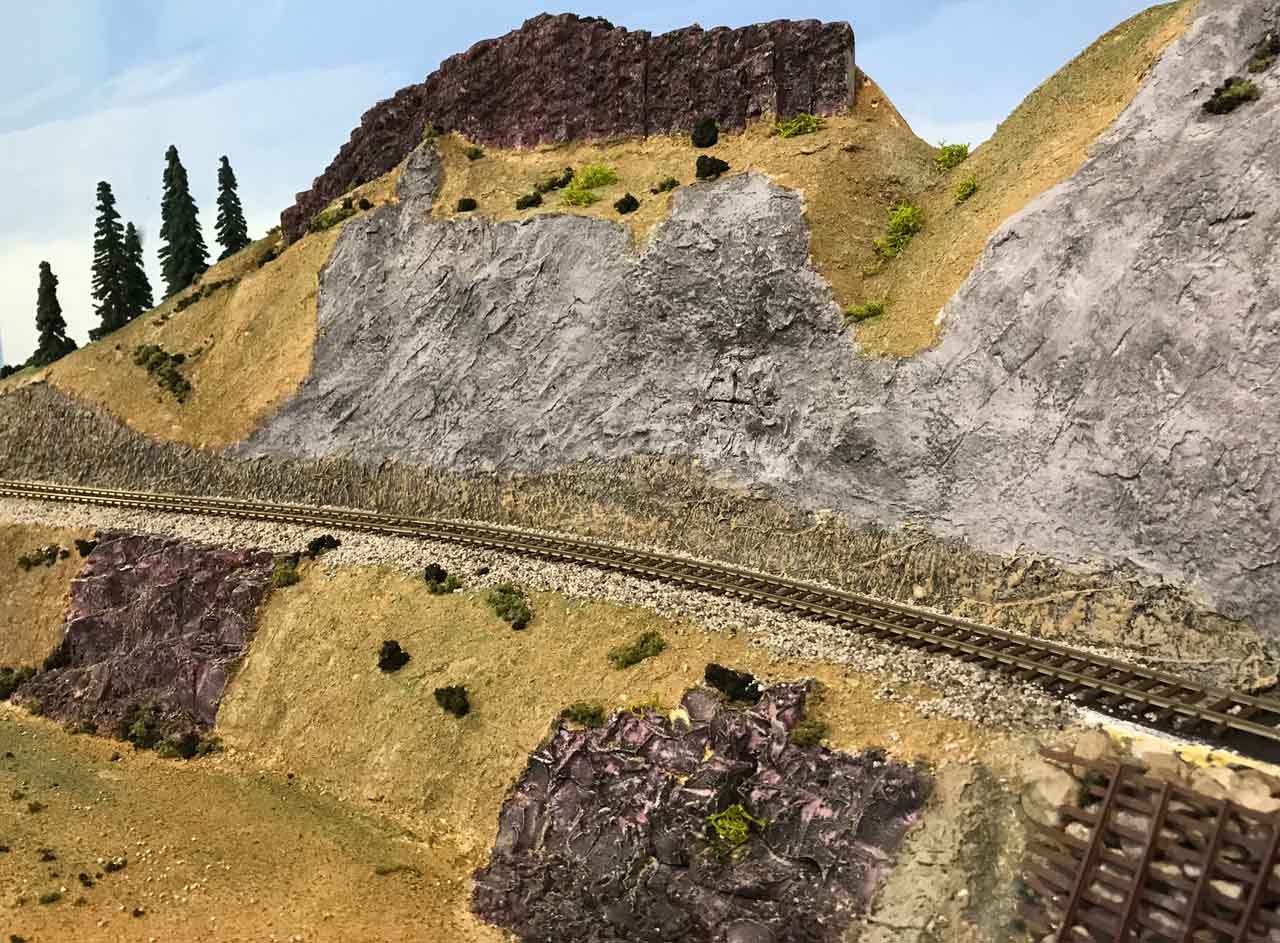 One section finished and ballast laid while it was still away from the wall, making it much easier than any other way. 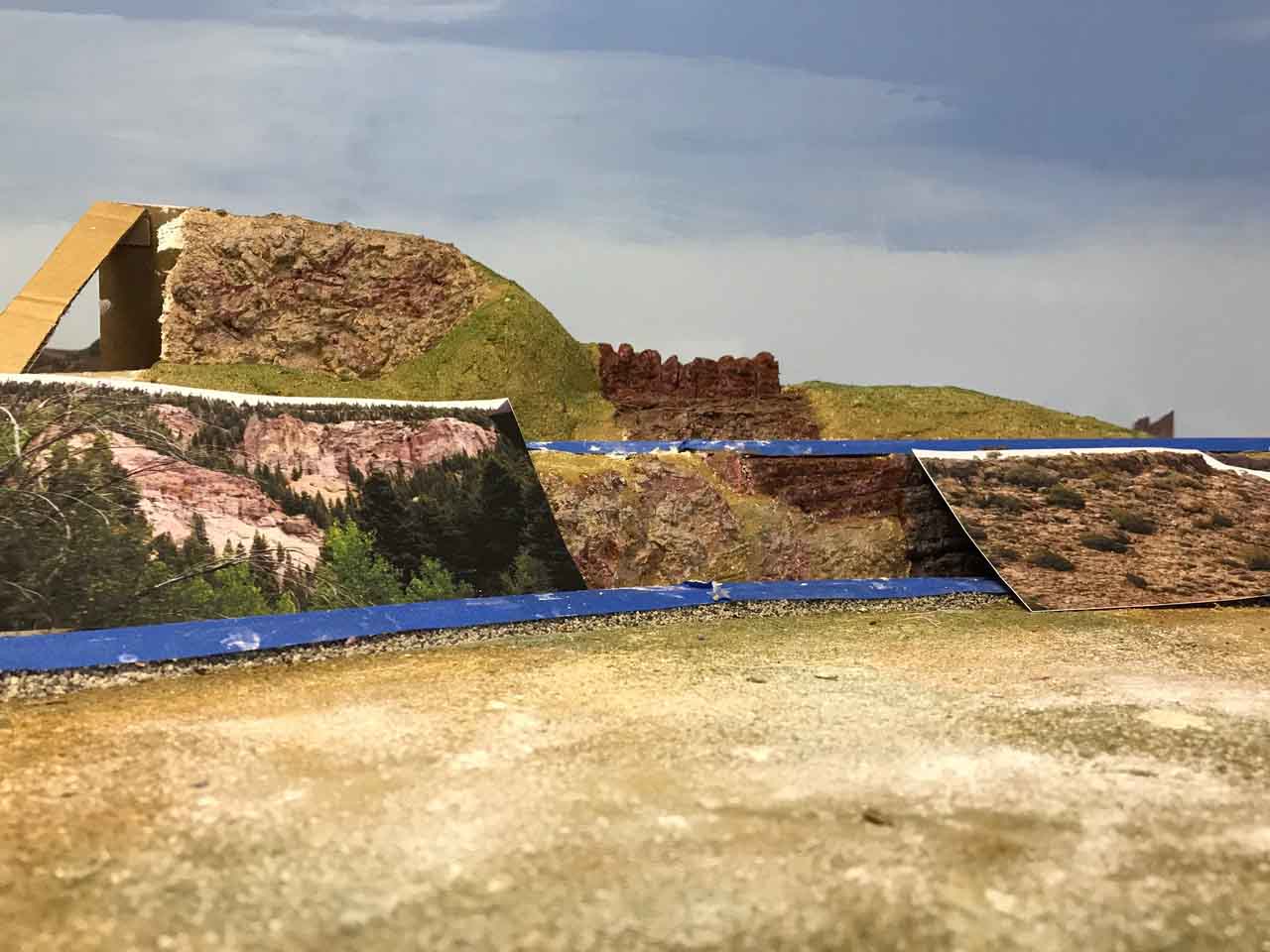 I moved the rear center module to the wall and secured it in place and re-leveled it all. Then I began the transition scenery toward the coal mining corner of the layout. Again, using my own photos of the area as guides to color and terrain.

Before working on the landscaping at the corners, I connected all the modules, tightened and leveled them all once again and connected all the trackage between the modules. Then I checked all the electric connections and turnout wiring (Tortoise switch motors) and verified that everything worked.

There is a #6 turnout under the mountain on the right that I wanted to know worked correctly before going any further.

Finally, I ran trains on all the trackage for a couple of hours. Switching, making up consists, etc. until I was sure everything worked. 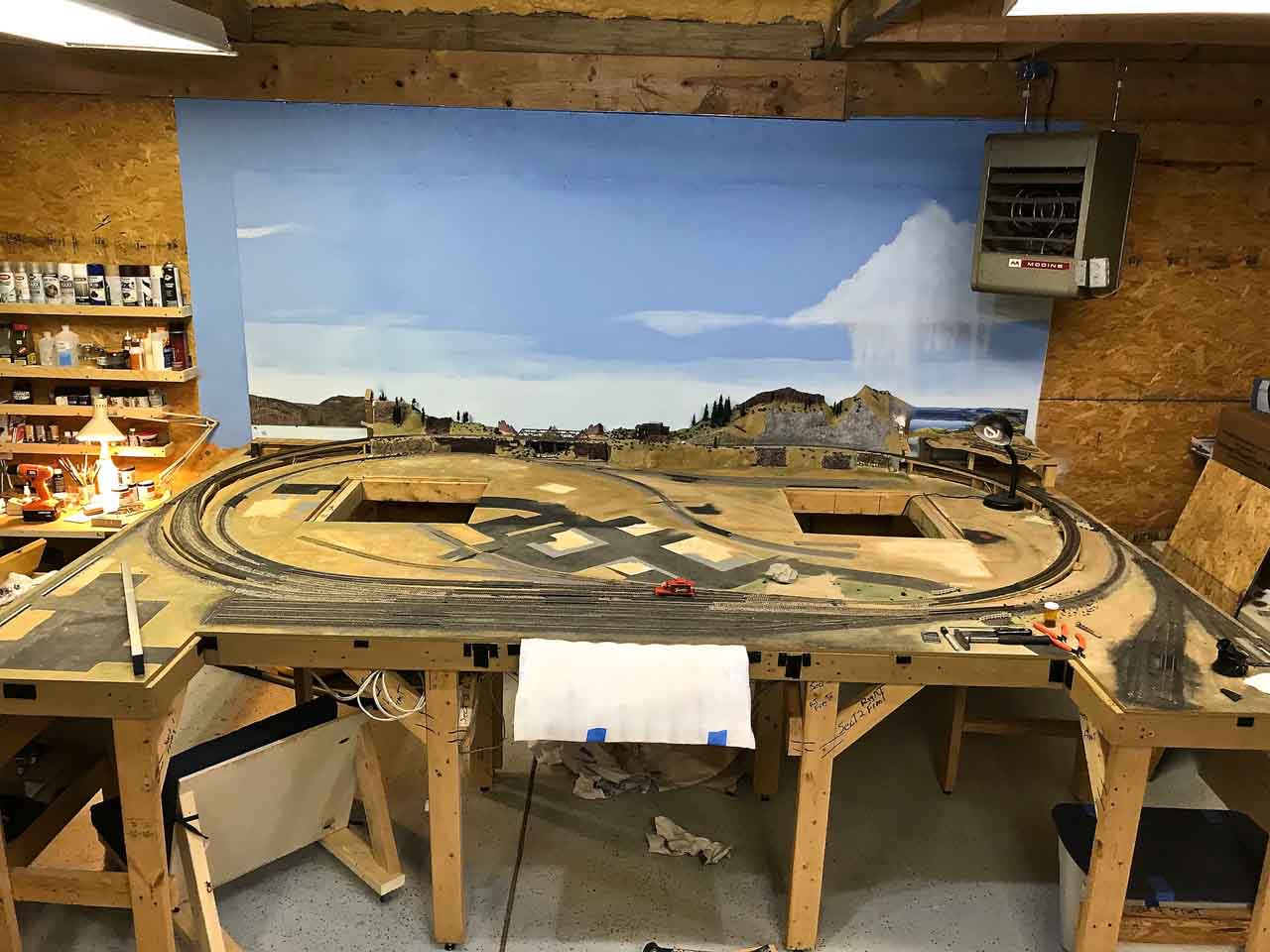 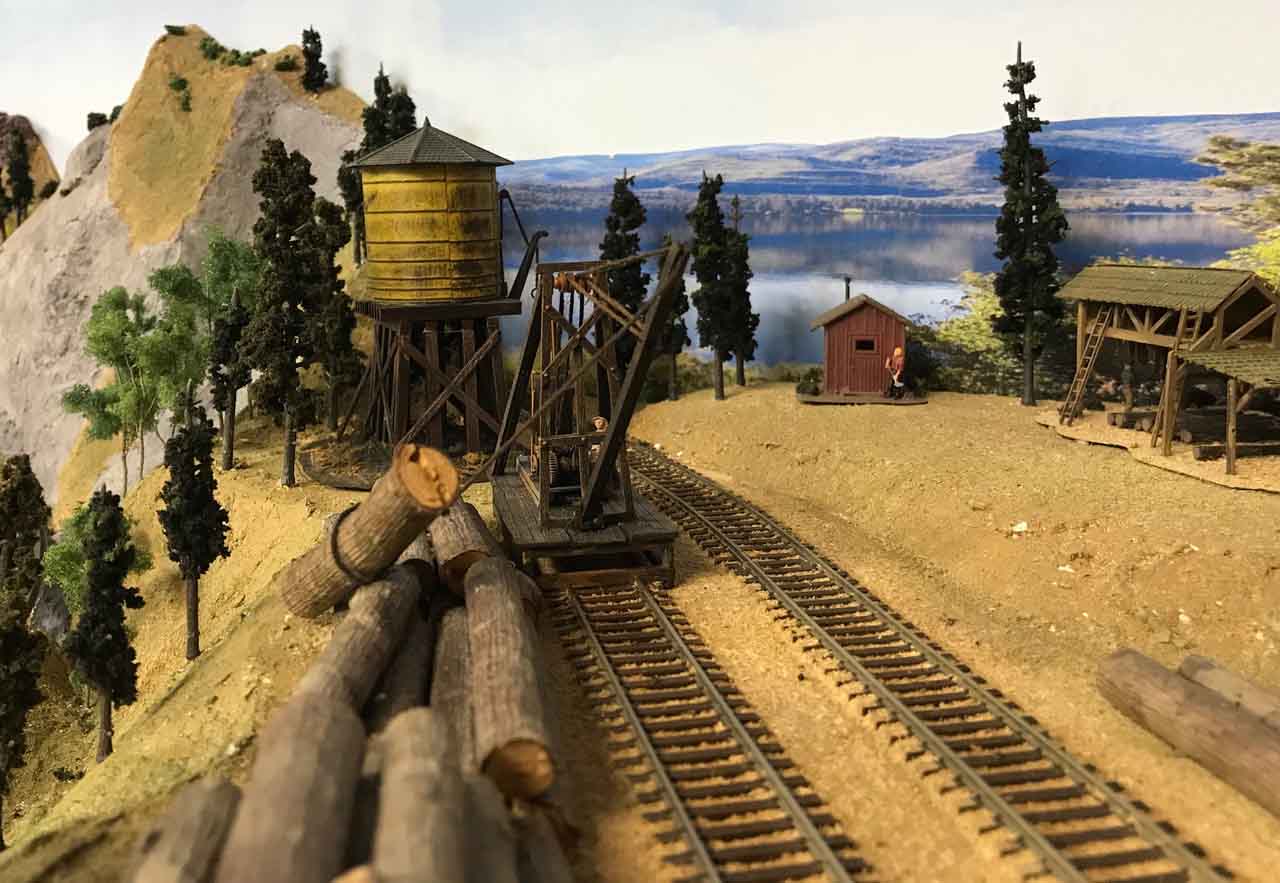 The right (east) corner of the layout features the logging operation. 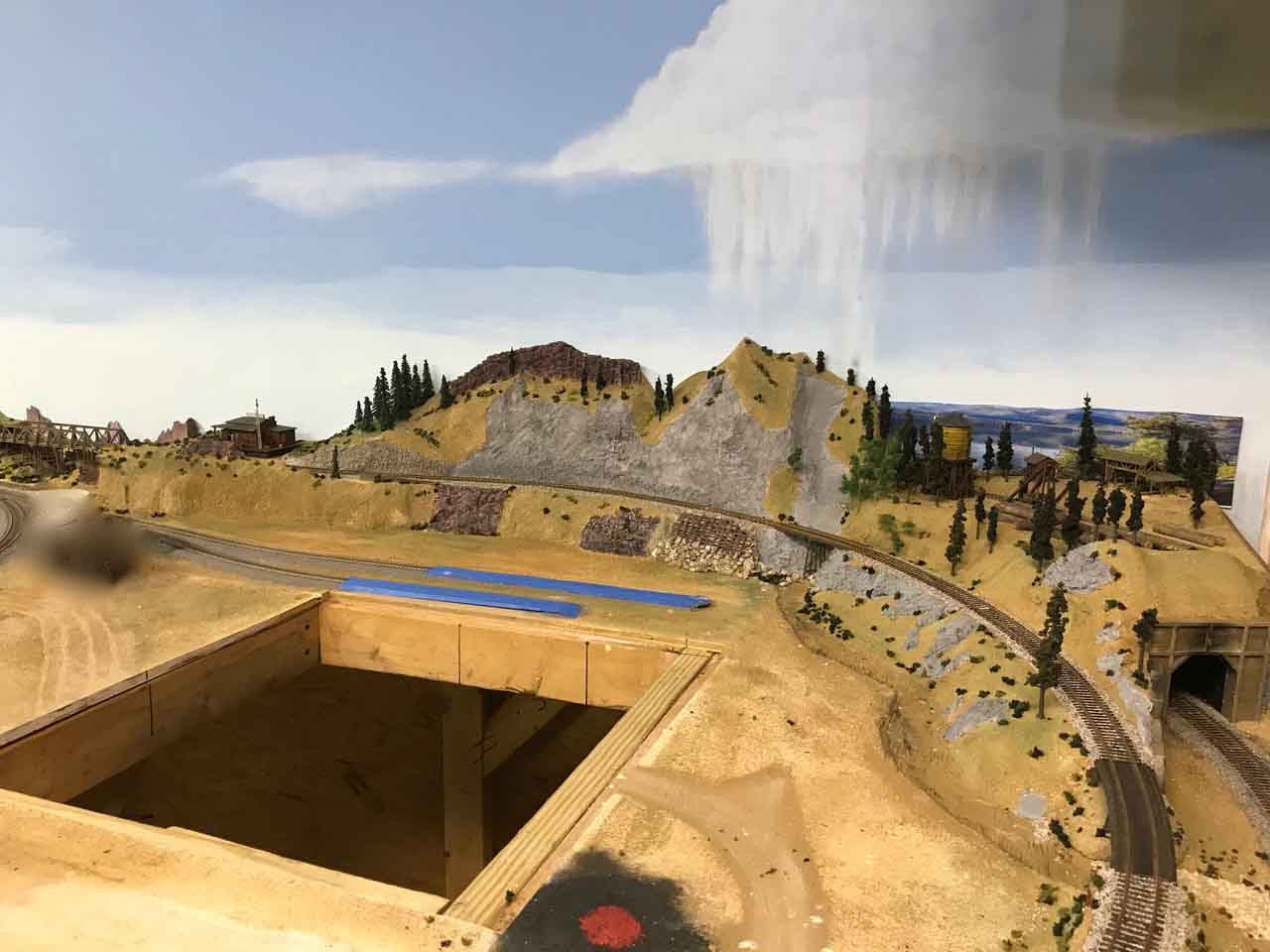 The following year was mostly filled with detailing and making sure everything worked together and complimented the overall intent of the railroad. Most of the buildings, etc. were placed on the layout where they belong. 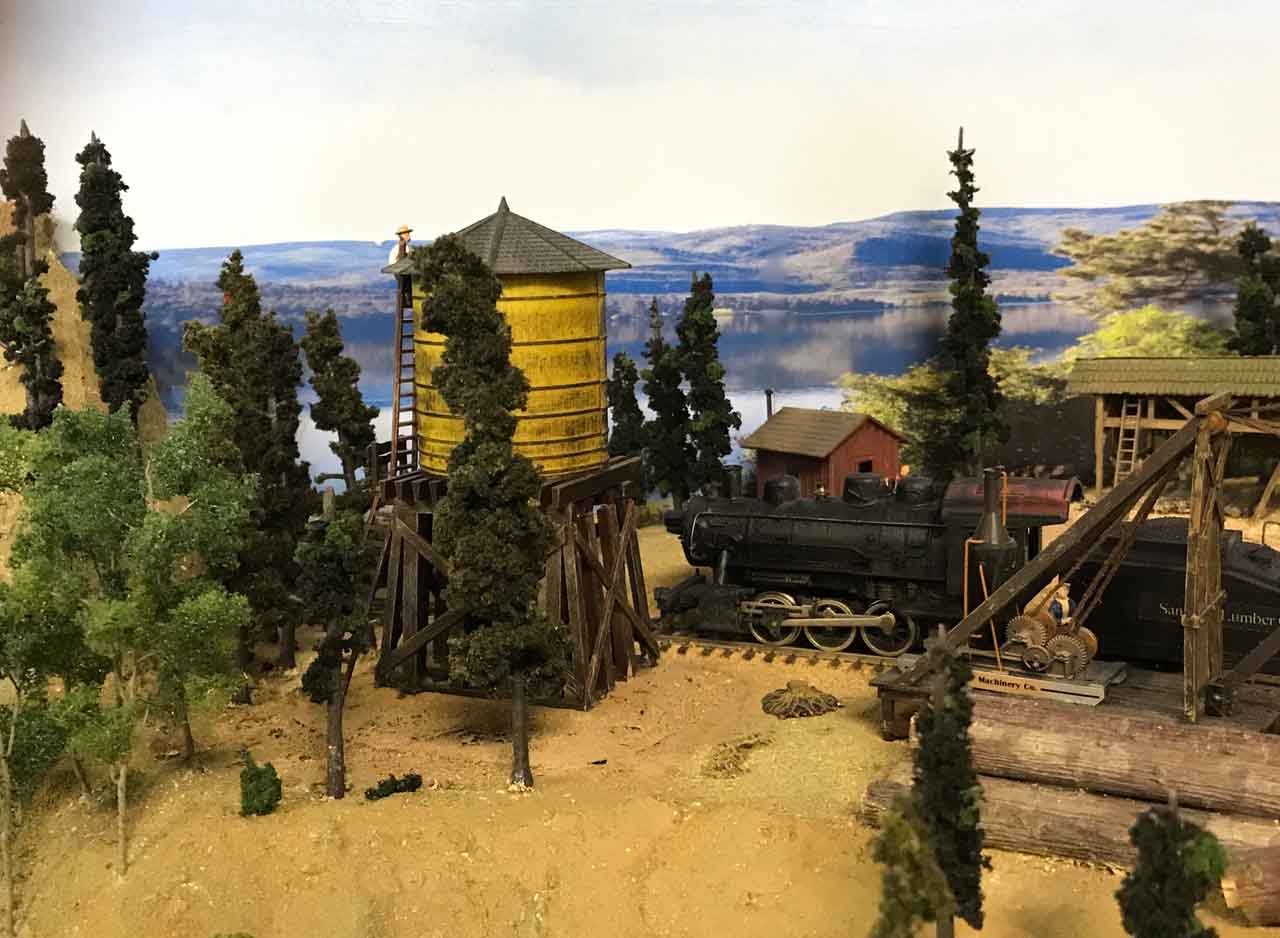 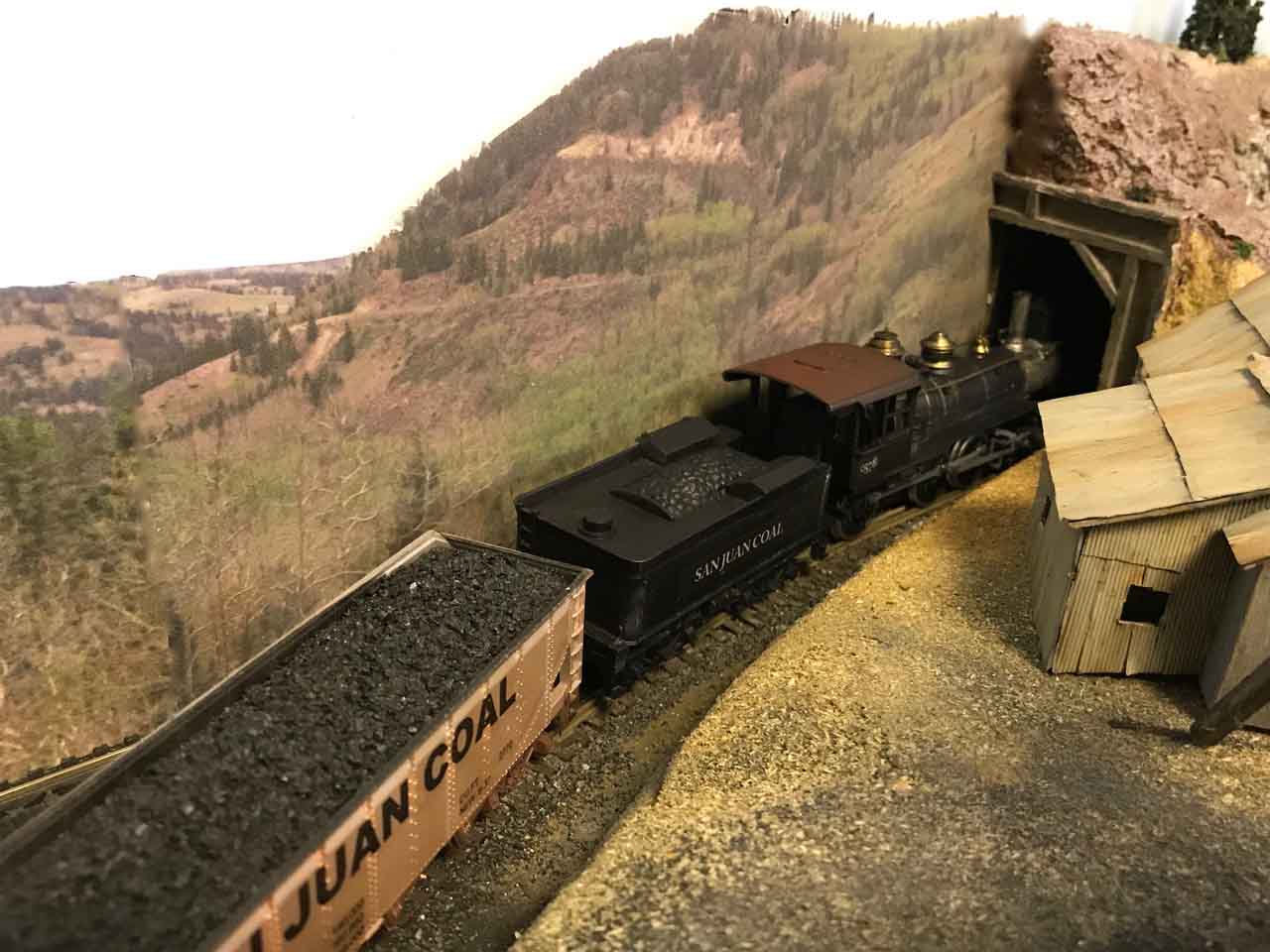 San Juan Coal occupies the west corner. Here you see the San Juan Coal steam engine with a string (not visible) of hoppers at the coal tipple (also not in the shot). 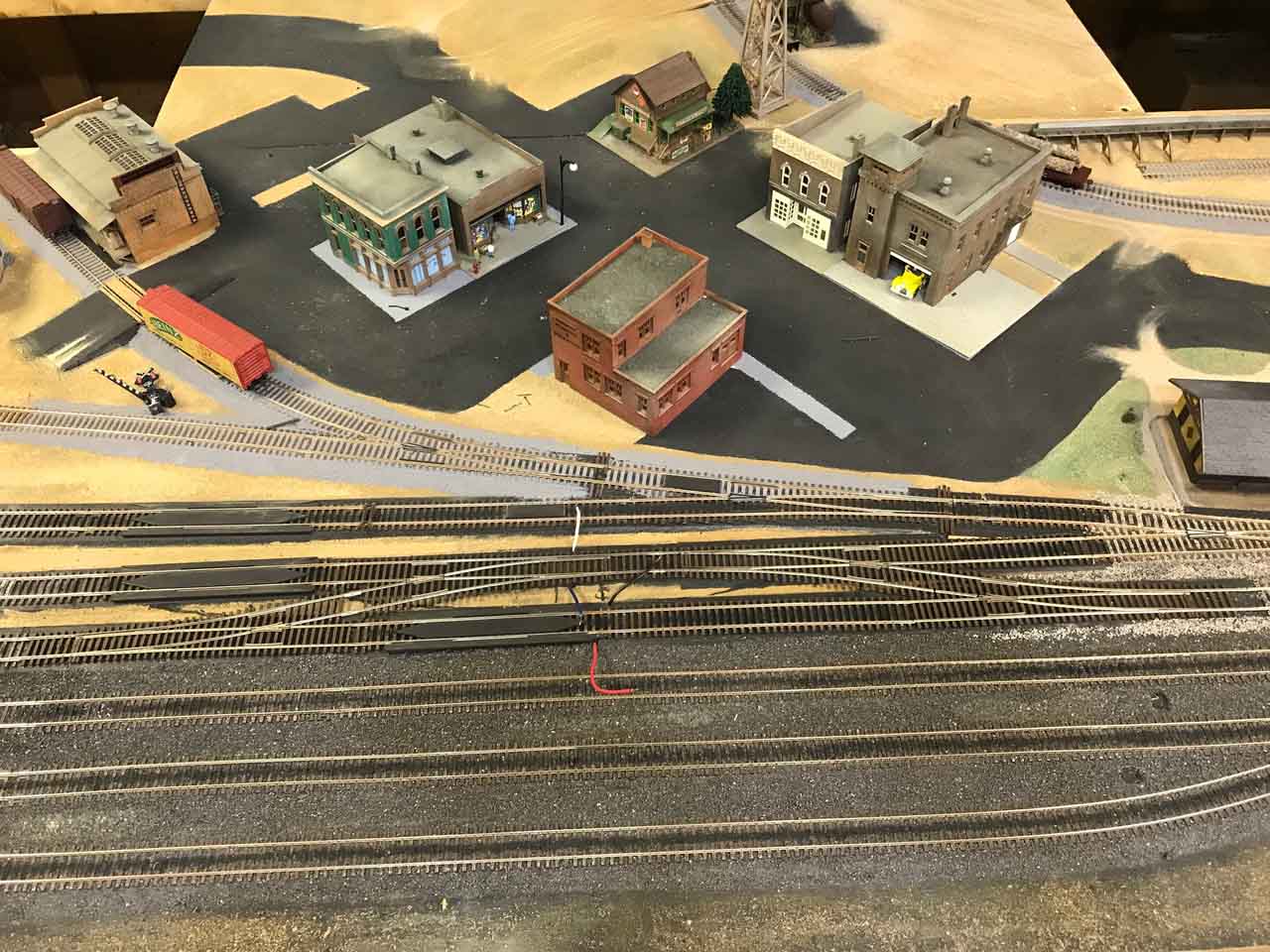 As operations resumed, I discovered I had an issue transitioning between inner and outer main lines. I could not get trains from inner to outer loop without putting the train on the outer loop onto a yard track or backed up on the passenger station siding.

So, a double “crossover” was installed using four #5 code 83 Micro Engineering turnouts controlled by Tortoise switch motors (making a total of 21 turnouts, all controlled by Tortoise motors). This was my first use of M.E. turnouts and I really like them! The actual rail does not seem as heavy as Atlas or Shinohara but that is not an issue.

For what it is worth; I went with the Tortoise because of the 2 built-in SPDT electrical switches. I use one set to power the frog and the other set to control the indicator lights. 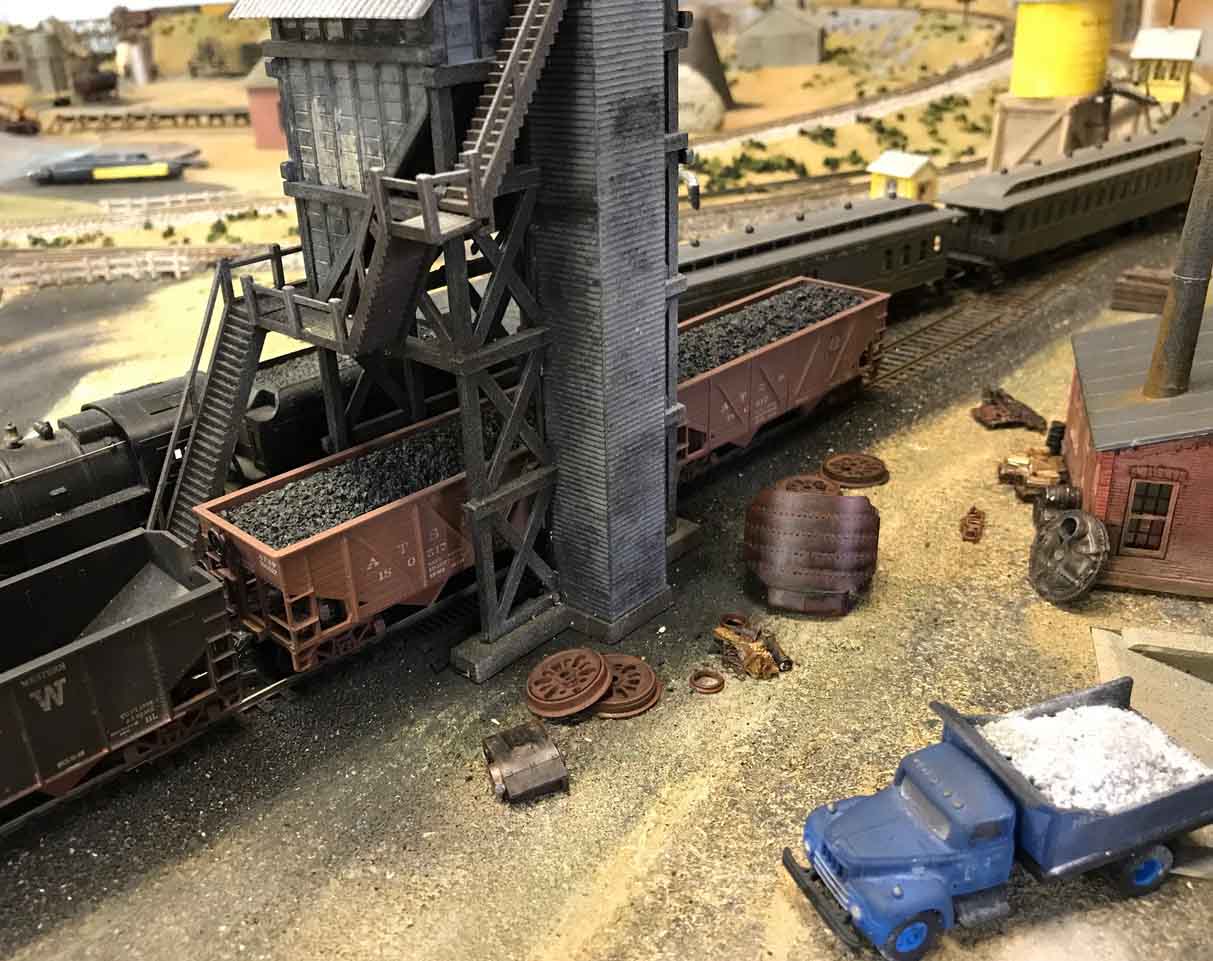 Detailing continued: this is around the engine house and the coaling tower, etc. I couldn’t find a dump truck to haul the ashes from the ash pit so I cut down a box van. 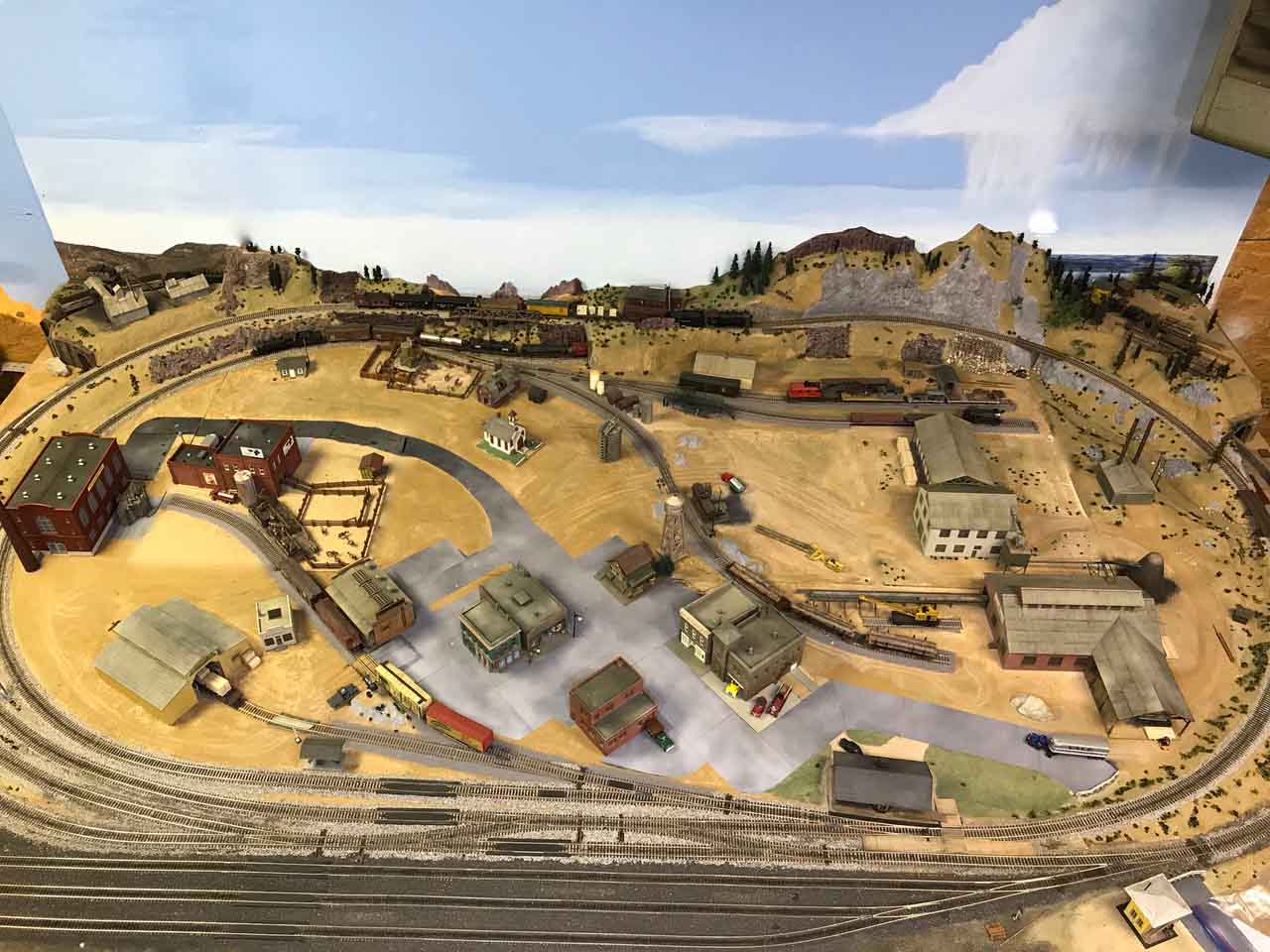 Overall look at the layout. 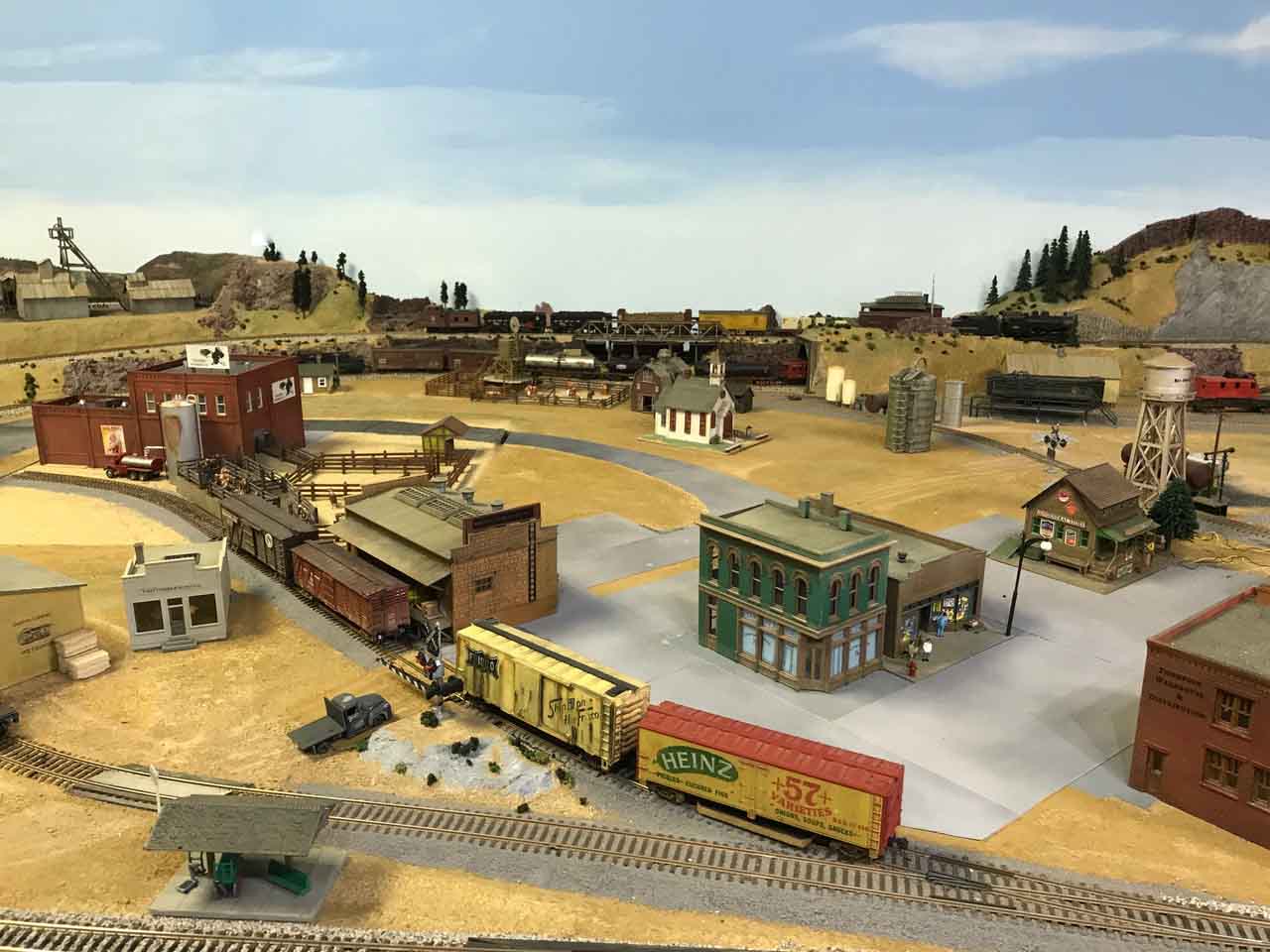 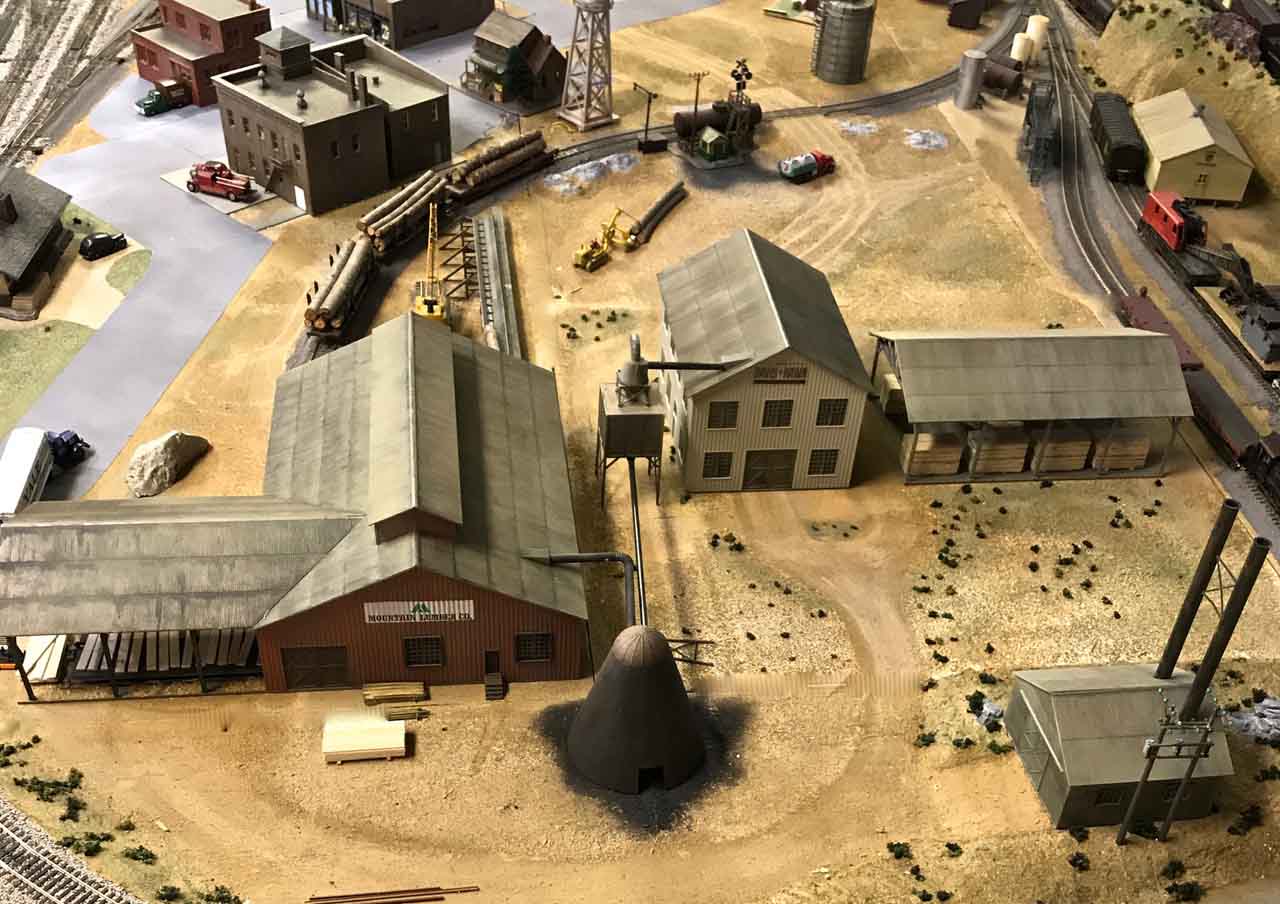 Here is the saw mill, the planing mill and generating plant. The M.O.W. yard is to the right, oil distribution is upper right and upper center.

90% of this year has been devoted to doing lighting the buildings and the streets of San Juan Creek and installing interiors in some of the buildings. 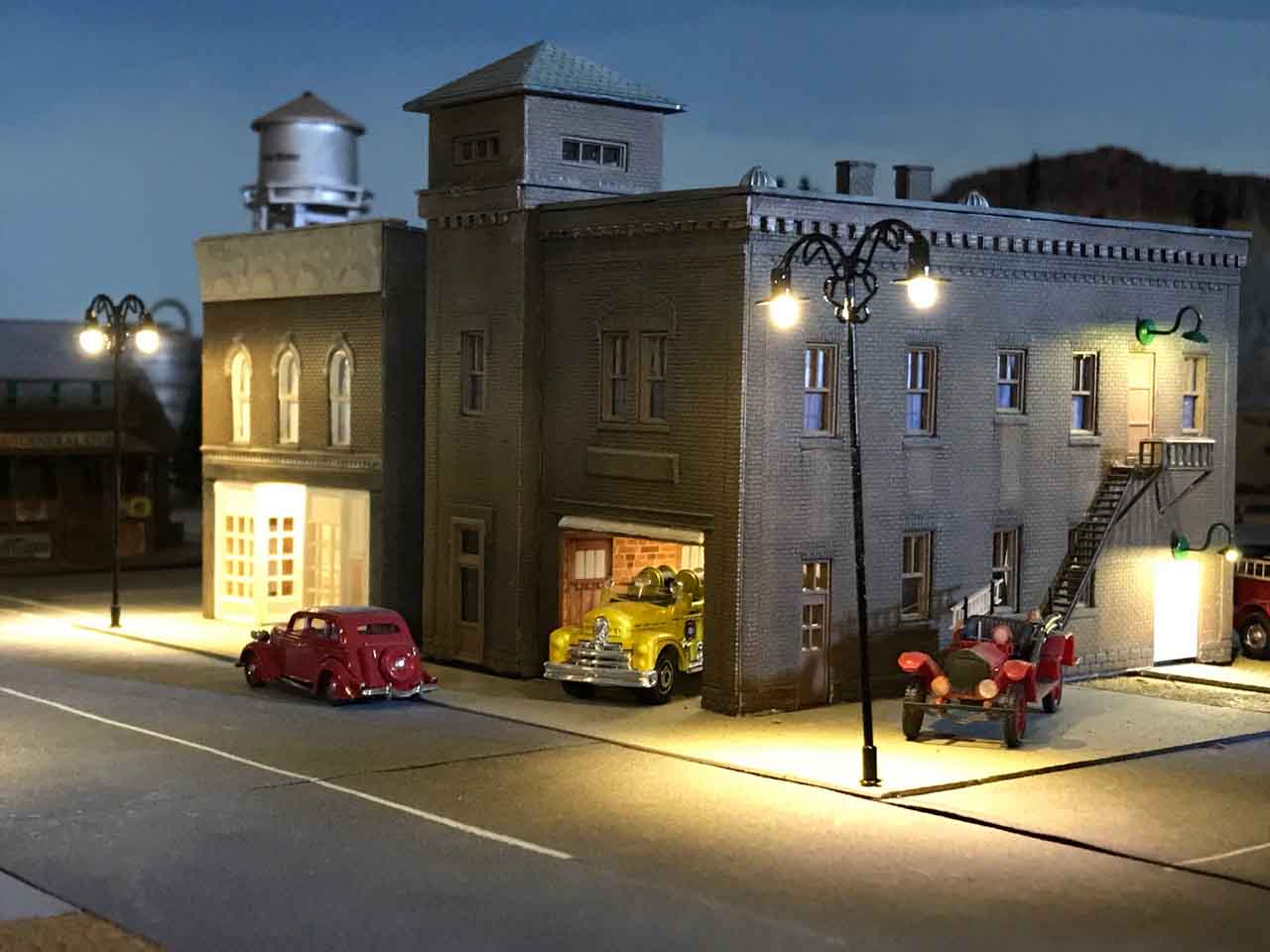 This is the fire dept. next to the bank on National Ave. 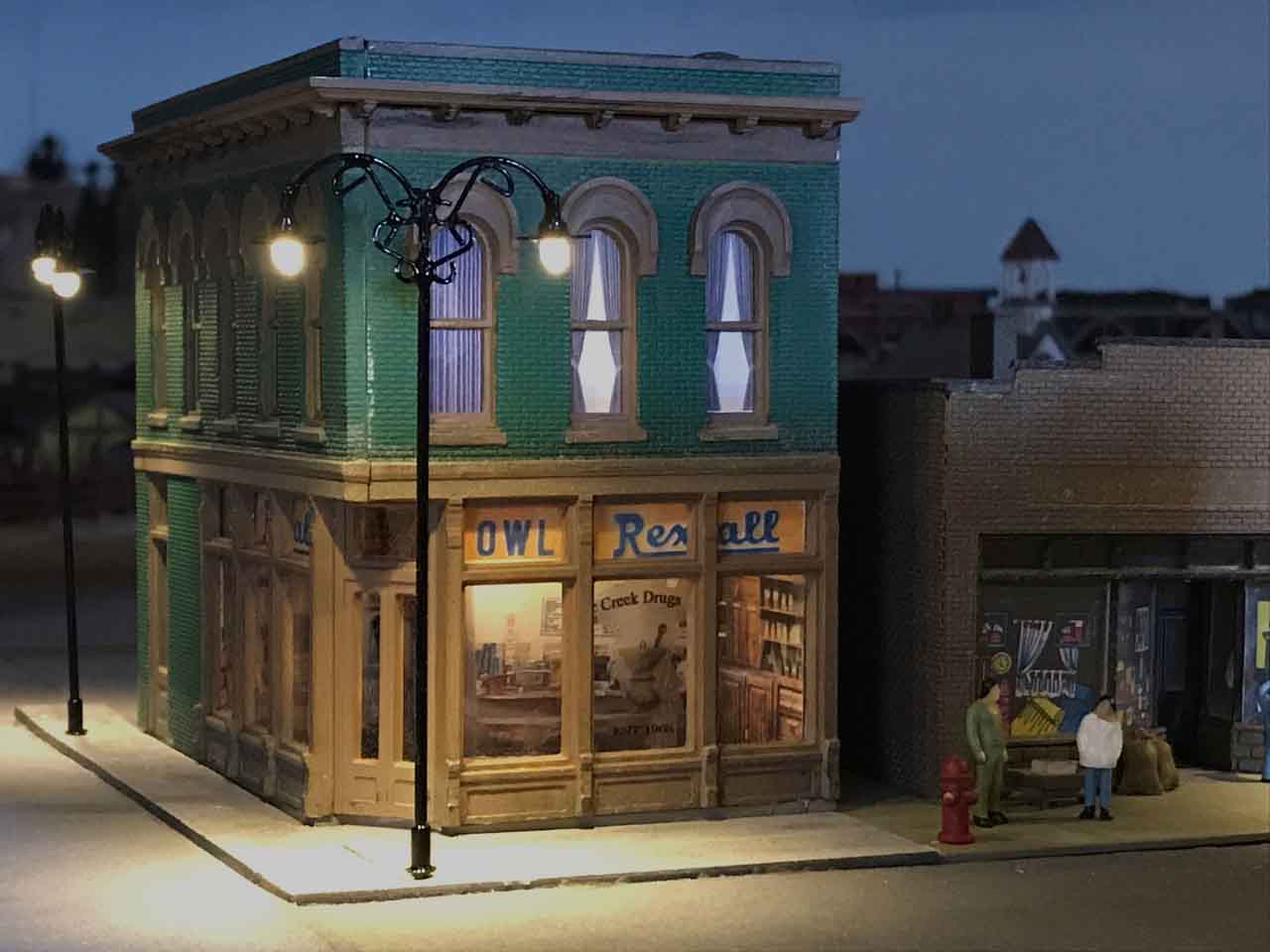 Creek Drugs is on the west end of Montezuma St. next to the Western Auto store 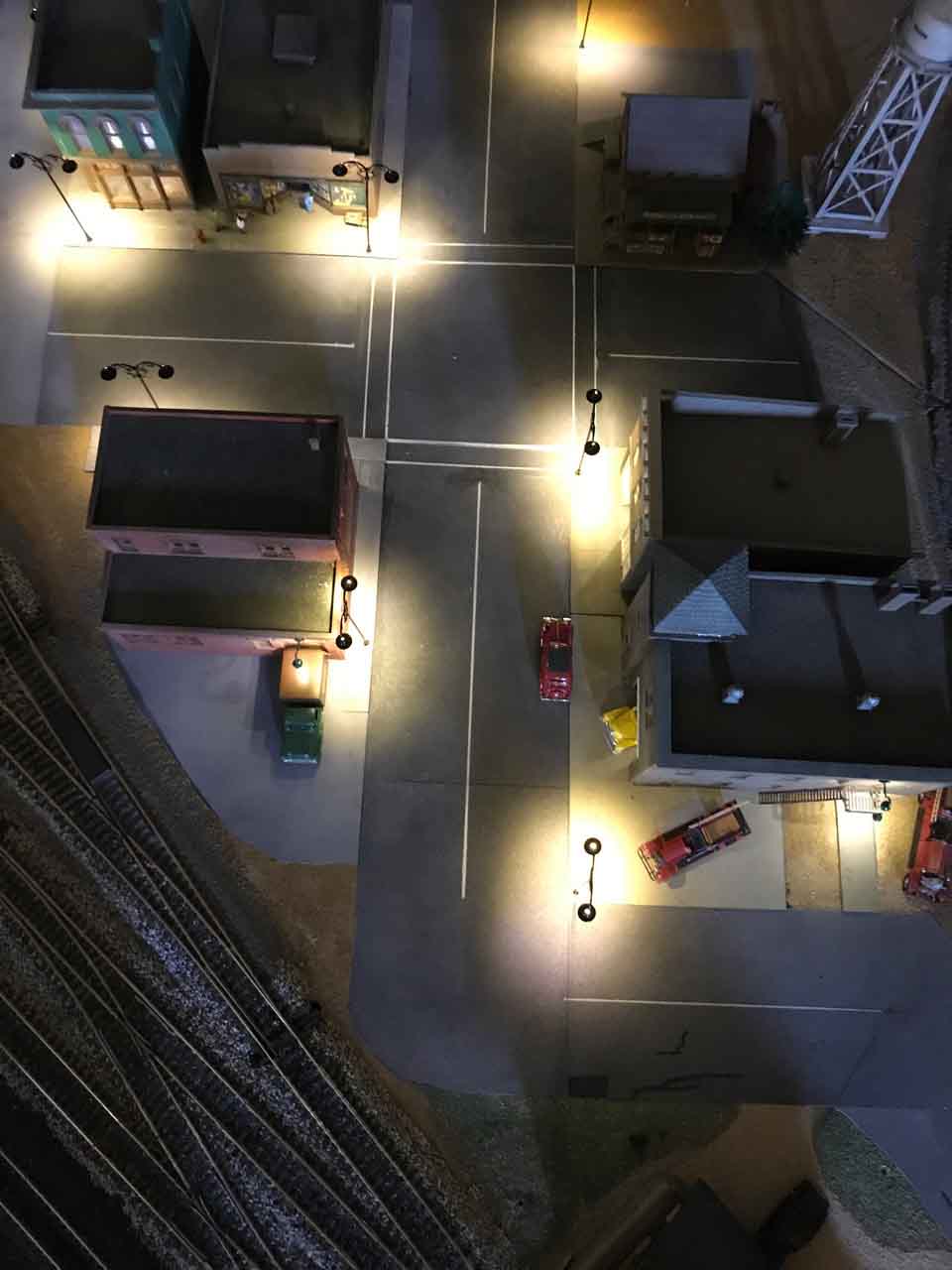 Street lighting installed. The streets are 180 grit sand paper sprayed with black and gray paints. Adding the white lines was a real trick and I botched it twice!

Because we live in SW Missouri, we have winters that drop into the low 20s/mid-teens and I bring all the locomotives into the house along with all my paints and glues. The shop IS insulated but it can still get below 40º.

This year, I will be bringing them out by the end of April to begin operations. But first, I have track maintenance and general layout cleaning (spelled “spider webs”).

Here is where I am at the time of writing: 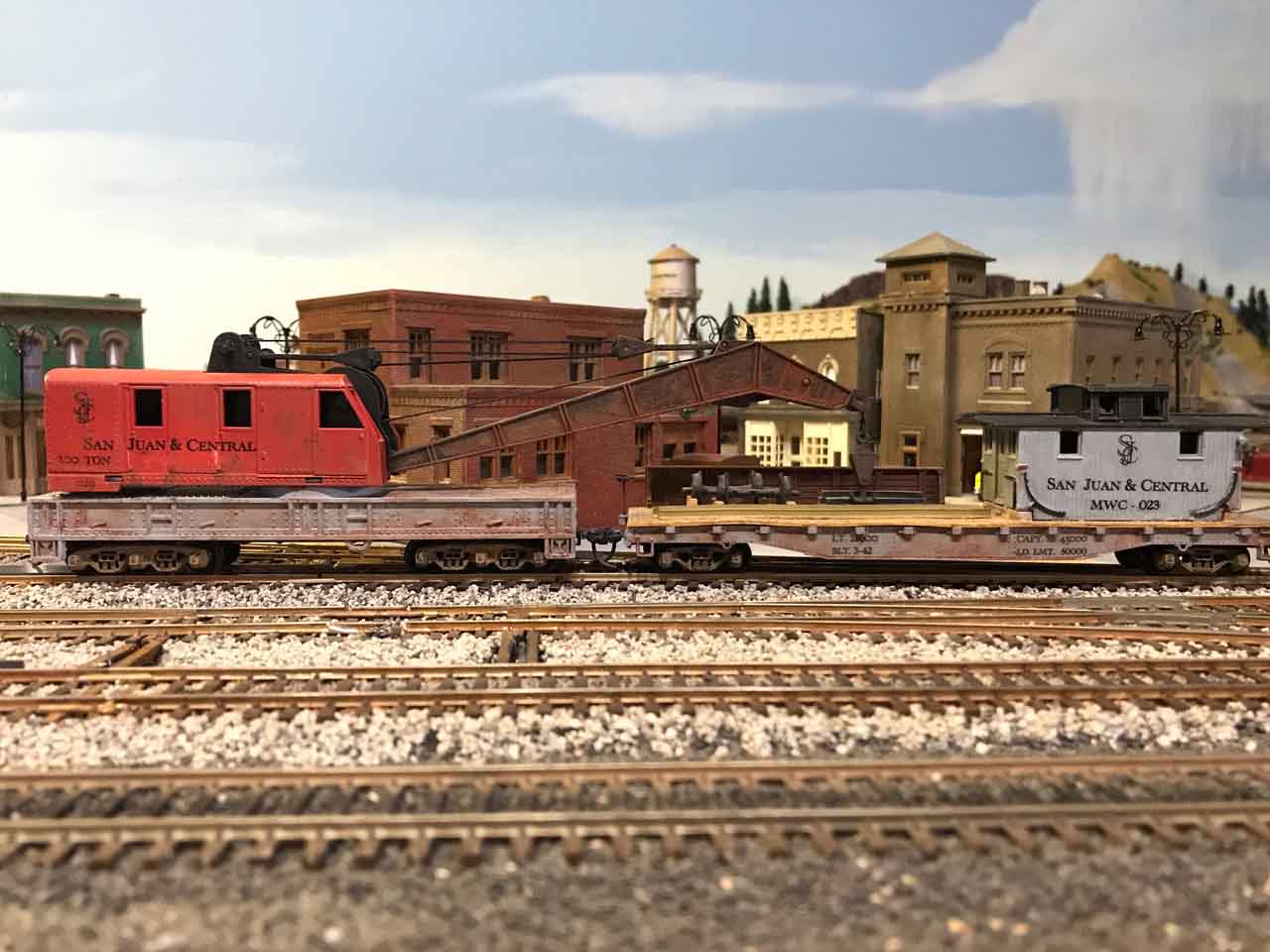 Lettered and weathered the M.O.W. crane and work caboose. Other than the decals for the Santa Fe, which runs through San Juan Creek, I make ALL of my own decals. These were printed on “Inkjet Clear Waterslide” decal paper. If I am putting the decal on a different background, I’ll print them on “Inkjet White”paper so they can be more easily read.
With inkjet printing, you have to spray 3 or 4 light coats of clear gloss or the ink will run. Laser printing does not need to be sprayed. 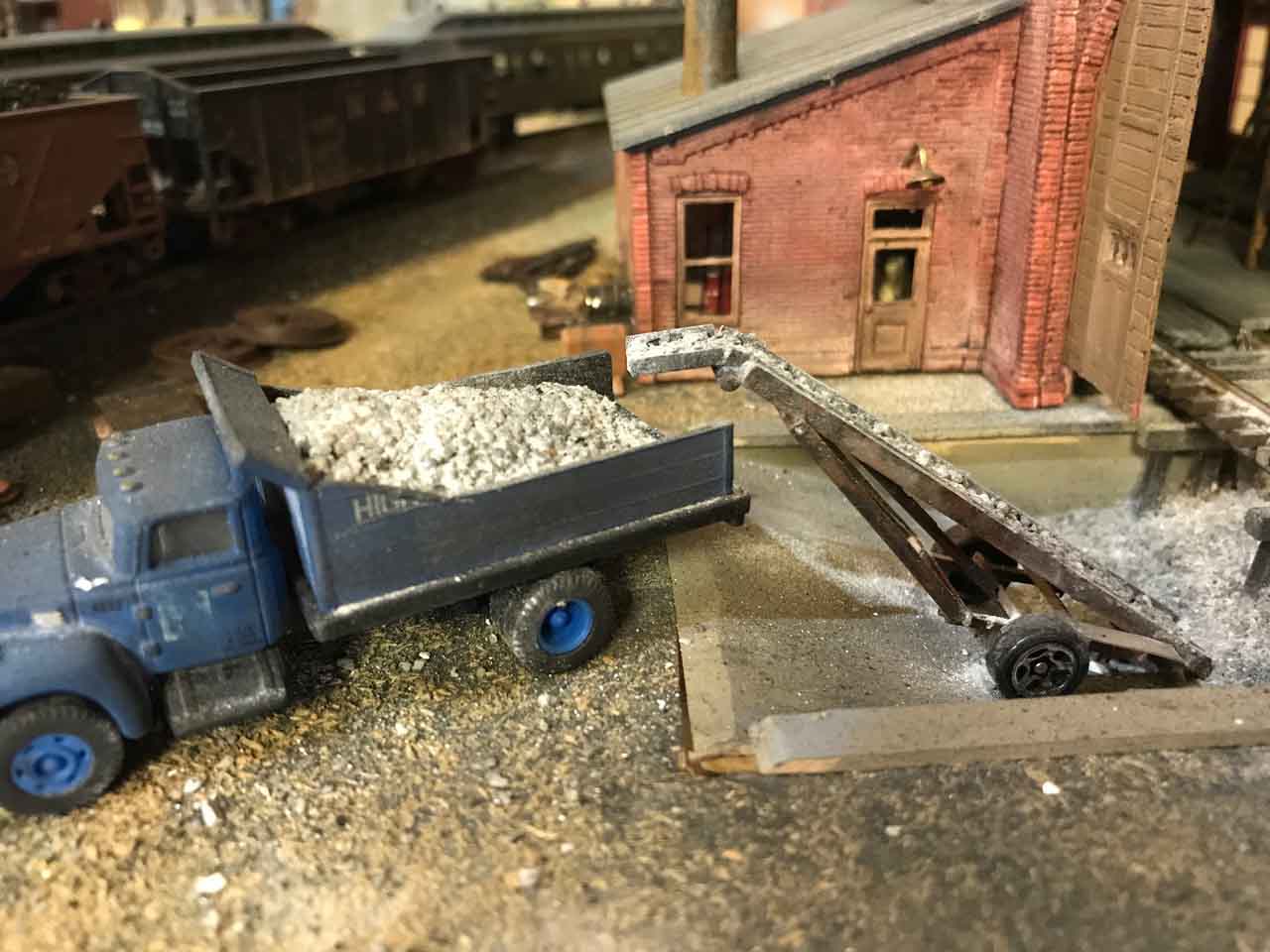 The ash pit needed a conveyor to load the dump truck so I scratch built this one. 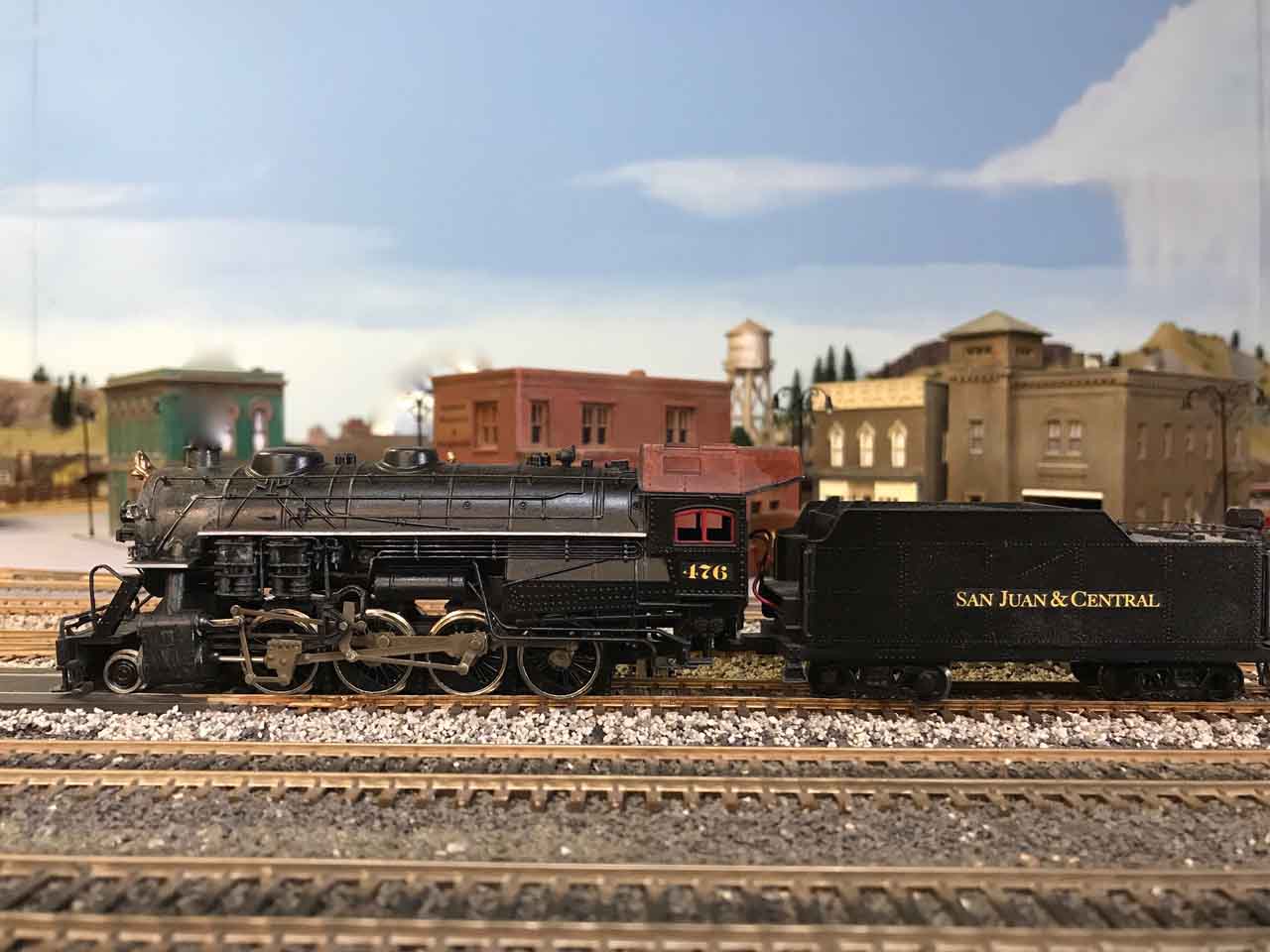 Again, I created these decals. This time, I made a full sheet of decals and did the print, either color like this one or white like some of the others on a black background. I saved the .docx files to a memory stick and took a sheet of “Laser White Waterslide Decal” paper to the UPS Store for printing. Cost less than $2 a sheet. I knew I had a number of decals that would be going on the steam locos so I made bunch with different numbers, etc. and in different sizes.

Once applied, any decal needs to be “fixed” with a light coat of “Dullcote”. Then it is easy to weather. However, in this case, since the name and number had been changed, I sprayed with Semi Gloss as I wanted the engine to look fresh out of the shop.

When I get everything up and running, I post pix. of the other four steam engines.

Thank you, Al for publishing these pictures. I hope they inspire fellow modelers as their pictures have inspired me.

My word – what a layout. Love the pics, and loved the narrative Joe sent too.

I hope you enjoyed this post as much as I did. Stunning stuff.

Please feel free to leave a comment below if you want to get involved.

And don’t forget The Beginner’s Guide is here if you want to take the first step on your model railway.