The size is 7’ 6” by 1’ 6” and is set up over two cupboards. The layout has come after I have studied a number of layouts in the Railway Modeller magazines.

The backdrop is in Cumbria but the layout is not really based on any particular place. And yes the bus is from Glasgow. I have fond memories of going up there to see my Scottish grand parents and have always liked the trams and buses from that time.

There are seven points on the layout and have taken Dave’s advice in having surface mounted points, however I needed another transformer to operate them.

The tunnel could be considered as a fiddle area but I cannot get behind the cupboards to take full advantage. Hope you like the pictures and all the best to you and your readers of your great site. 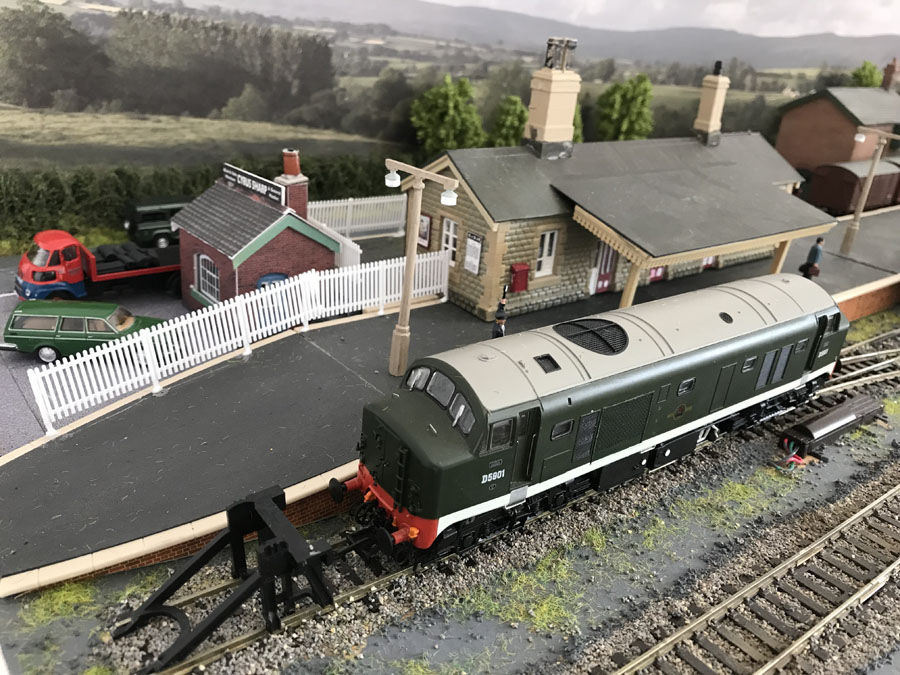 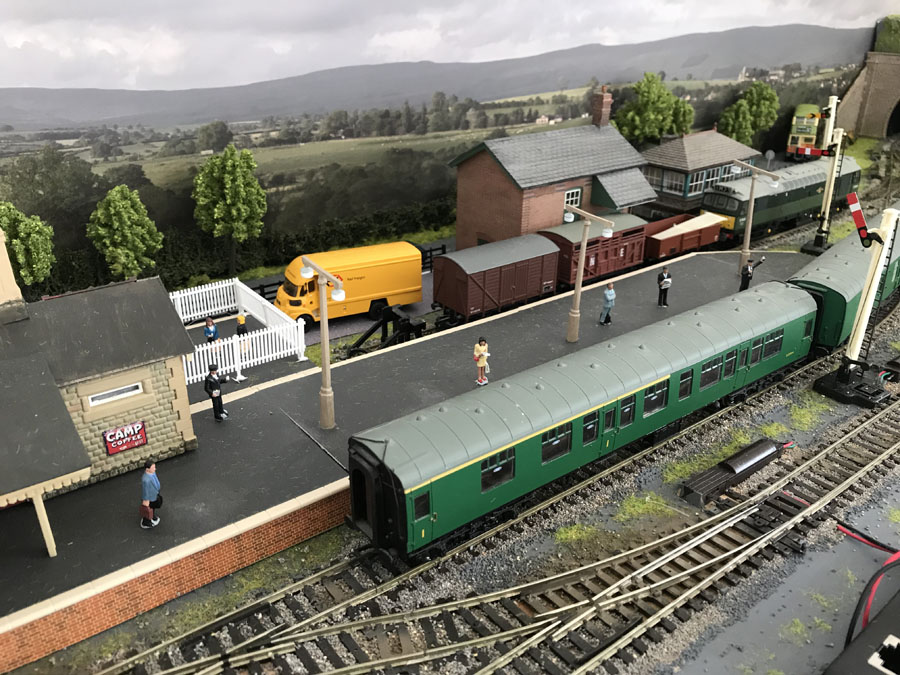 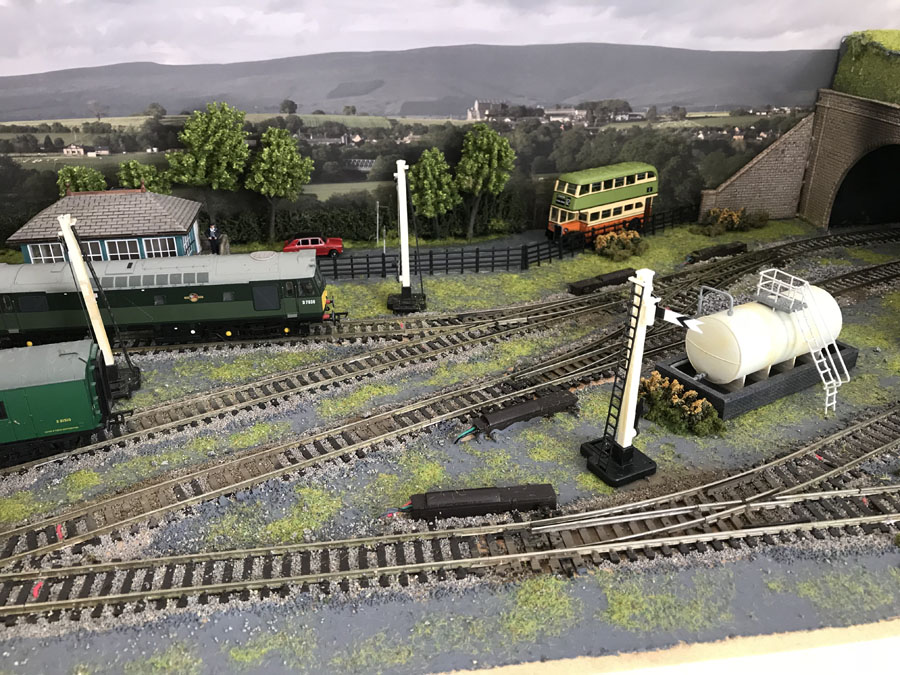 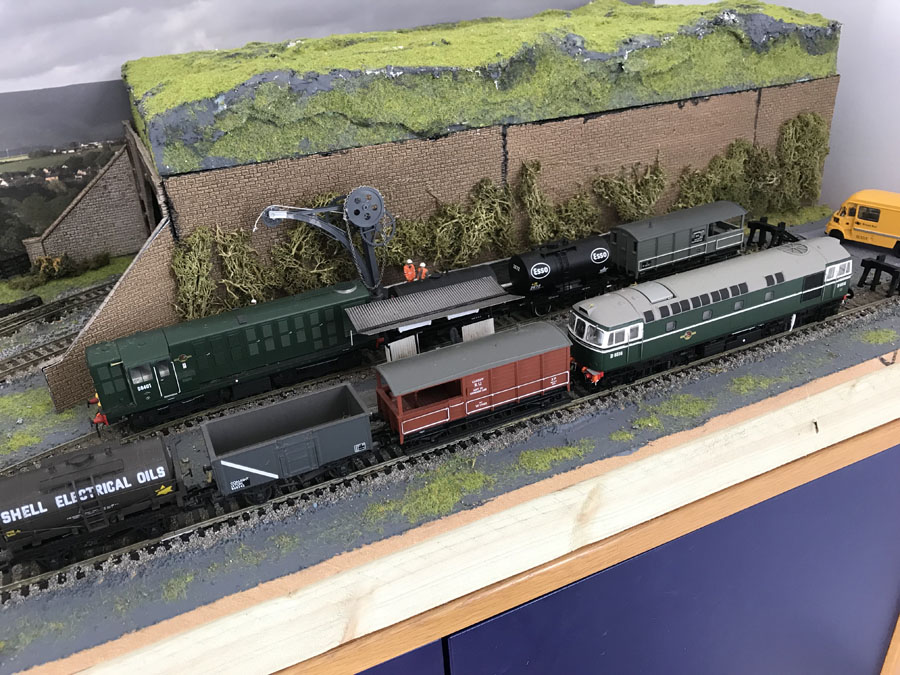 I have had very good progress building out the new Farland Layout. I finished the farm, I got Far Moor Village built, Far Cliff Beach with it’s Caravan Park, Car Park and camping coach are now installed. So, I am turning my attention to the completely unfinished side, the Howe Street side.

The first thing I decided needed to be done was to clean up the track going through the station. When I originally put this track in, it was a bit haphazard.

I didn’t know yet what I would be doing on this side of the layout, so the track was just laid in to get the trains through and make continuous loops. One loop each going both ways for the passenger trains. Which I am most interested in and one loop going both ways for freight. My intent has been to run the freight as a single line.

More recently I have added a crossover from the freight to the down main and another back again to the freight line in Far Moor. There are also crossovers going both ways on the passenger lines just outside of what will be the Howe Street Station (HSS).

I have installed a run around in Far Moor so that a locomotive can come around to the other end of the rake and pull it back to HSS going in reverse. By adding one conventional crossover in the Howe Street Station and using one of the others just outside of (HSS), service to and from Far Moor from HSS can be continuous. Therefore, I am removing the X crossovers in HSS.

The distance between the passenger tracks was dictated by the X overs in the beginning and now they can move closer together. That will free up more space for the freight yard and the steam shed and diesel maintenance area.

Here is a link to a short video as the process begins and I fill in the first passenger loop after ripping out virtually all the track in the HSS area.

One question that is always asked is why, as a North American, am I modeling British outline trains and scenery. The answer is that as a very young and impressionable boy, I lived in London for a time. We as a family spent a great deal of time traveling the UK by rail and it just stuck. The more I have learned, the more interested I have become.

Thank you, Al, for all you do for us in the modeling community. I think I can safely say, we all appreciate it greatly.

A huge thanks to Ian and Rob.

Hope you enjoyed Rob’s video as much as I did. He really does pack a whole load of tips in to his vids (his last post is here).

And if you want to get going on your layout, the Beginner’s Guide is here.