Rob’s been in touch. He’s added to the collection of Santa Fe model trains to the blog:

I have read your daily posts every day for several years. I wanted to share with you my history with model trains.

When I was 1 year old and during WWII, my father purchased a 7 year old Marx Streamliner train. I guess we know who was going to enjoy it, especially since growing up on a farm he never had one.

They when I was about 9 years old I got an Americam Flyer Royal Blus train for Christmas.

Then a neighbor moved away and gave me his Circus Train modeled after “The 1952 Greatest Show on Earth Movie”.

My Dad Bought a 4’ x 8’ piece of masonite for a train table but never had time to build the table.

I put the masonite on a coffee table and a couch down in the basement. I had 2 switches, an uncoupler, 3 buildings and a cattle loader. Soon we moved and all the traiins got packed away.

I was entering junior High School and never got the trains out again. After High School I went to college and married soon after graduation. That marriage didn’t work out, but now I have the most wonderful woman in the world who has been with me for 51 years.

In 2006 I saw an ad for HO Model trains. I really missed my American Flyer stuff and this ad showed a 2 car garage with the floor covered with engines, cars, buildings and track. The price was right and several large boxes were delivered to my house.

I was in Charlotte, North Carolina and the trains came from Winston Salem, a few hundred miles away. Put everything in the garage and had to change jobs shortly there after.

Those boxes were moved several more times over the next years. There was either no room for a train table or no time. One of my jobs was being a model maker building plastic models of chemical plants in 3⁄4” to the foot scale so I got to develop some modeling skills.

I have finally retired and moved to sunny Florida, USA. The local hobby shop was getting out of the model train business and I was able to buy 5 HO train sets for a very low price. I researched the purchase I made in North Carolina and it appears the all the trains came from a hobby store and the owner passed away and the family closed the store.

There are several Santa Fe model trains engines needing repair and there were several buildings in kit form that had to be put together. There is a 1950’s 3 engine 7 car Santa Fe stream liner that is beautiful except all it does is sit and spin the wheels. It won’t pull the train.

I am now 80 years old and I figured I had better put together a train table. I started to clean out the garage and my great wife told me to set it up in our guest room. We only have 1 or 2 guests a year and we can put them in a hotel. As always she was right. The temperature extremes in the garage would have played havoc with the trains.

I have included several pictures of “Robertstown” as it is today. It still isn’t finished. I need to ad lots of grass and other details. But it’s coming along. There are several stories in the display which I recorded in a movie, but I am unable to transmit movies I take with my phone.

So, here are the pictures. I hope you enjoy them.

OH. By the way. The trolley, or tram as you call it, runs on a track with 8” radius turns. I used flex track and extensively modified the tram so it would make the sharp turns.

Thanks for all of your daily efforts. 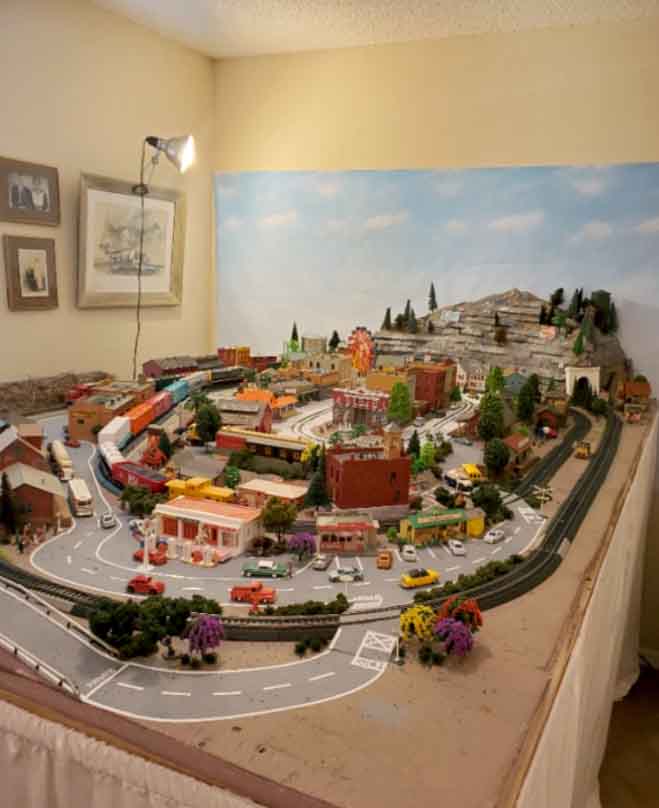 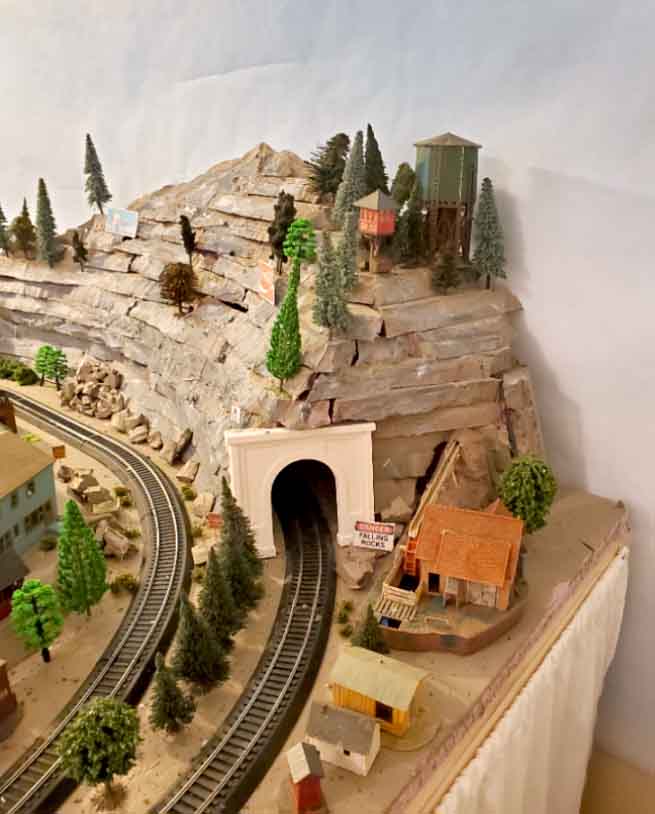 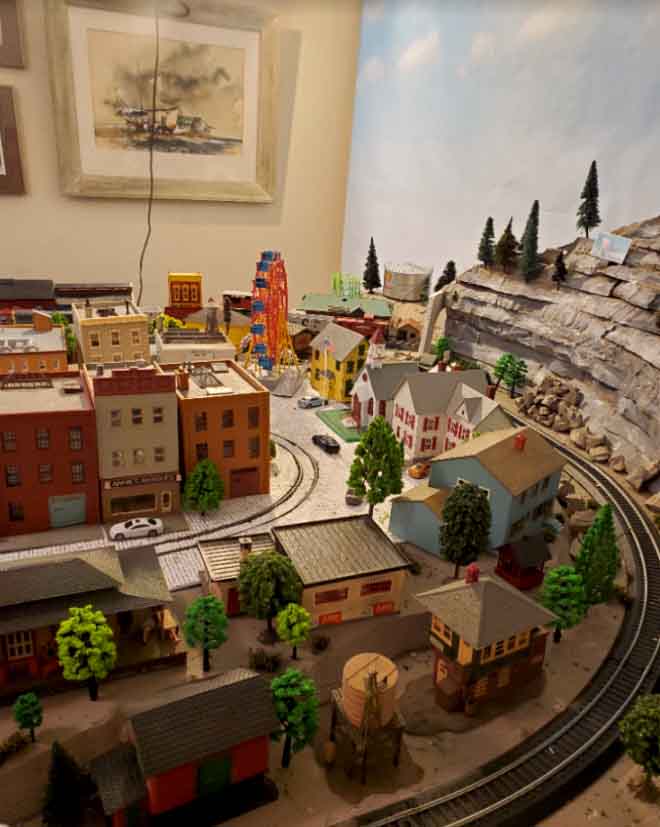 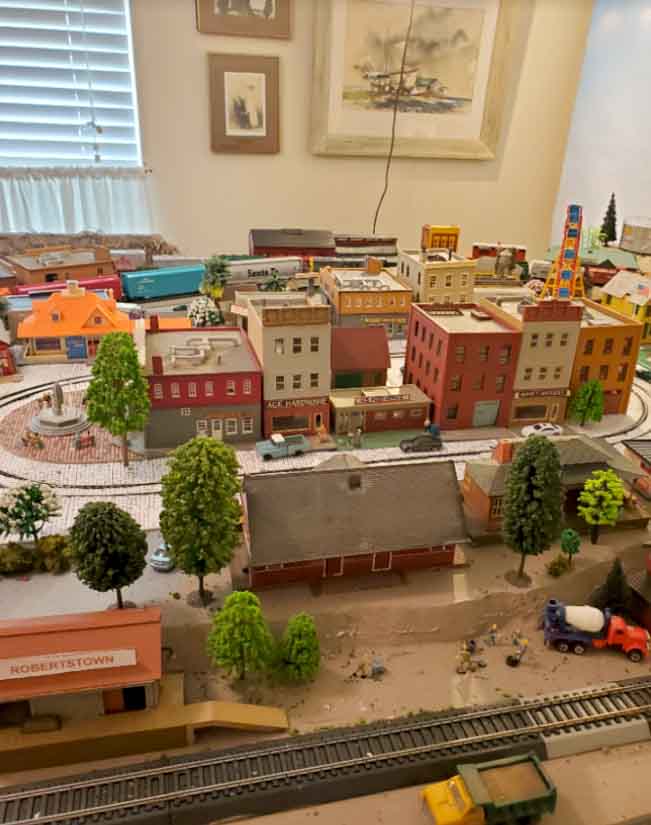 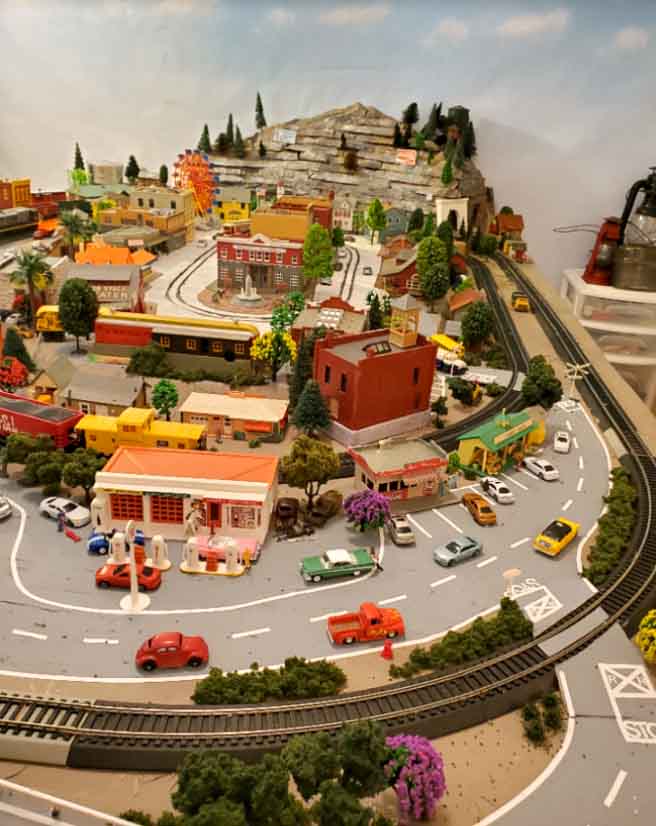 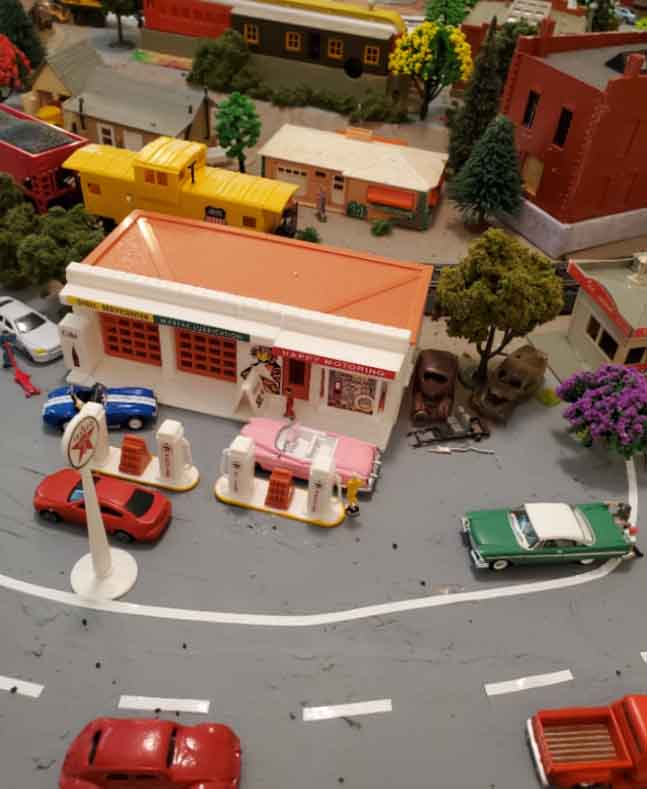 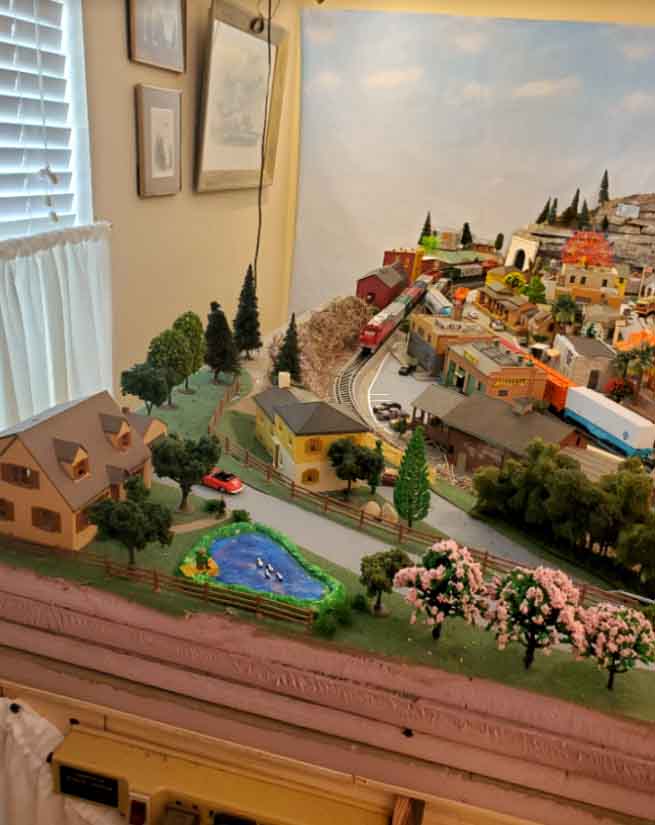 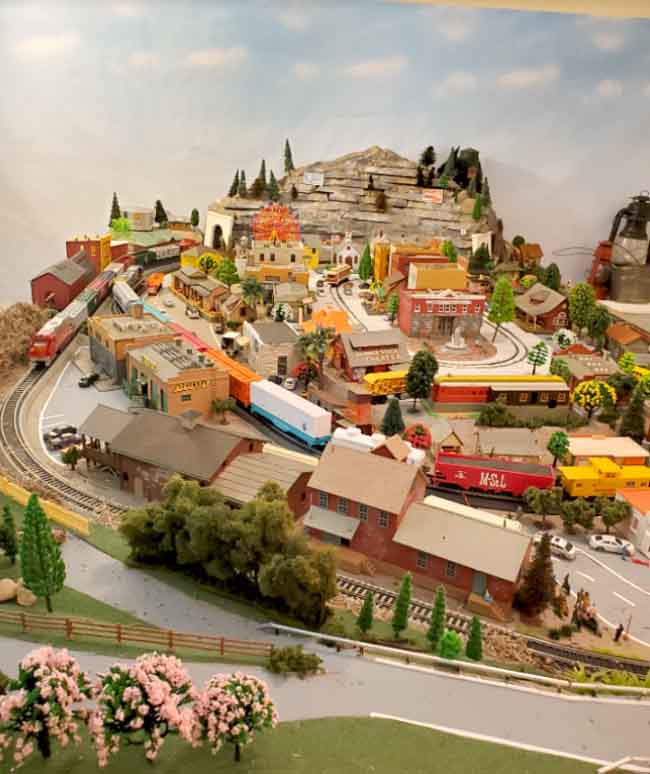 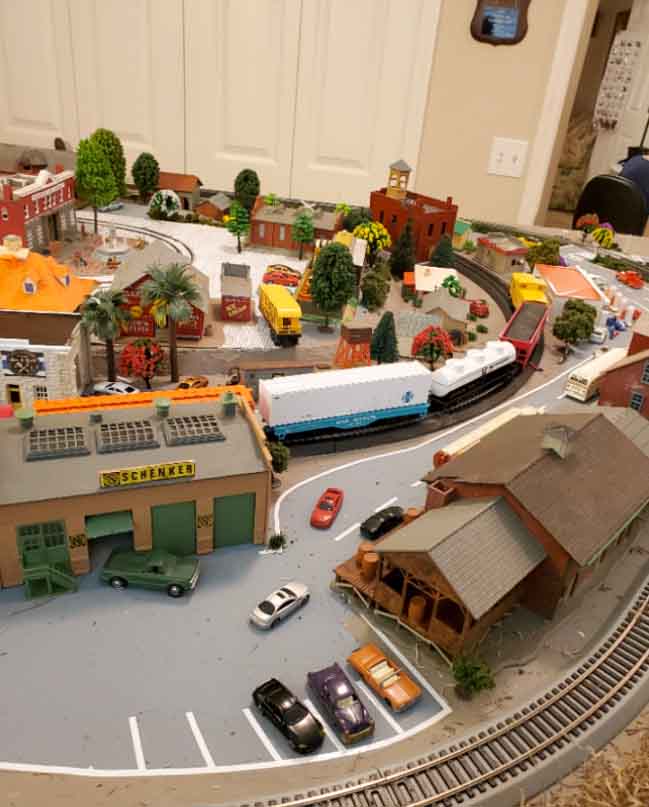 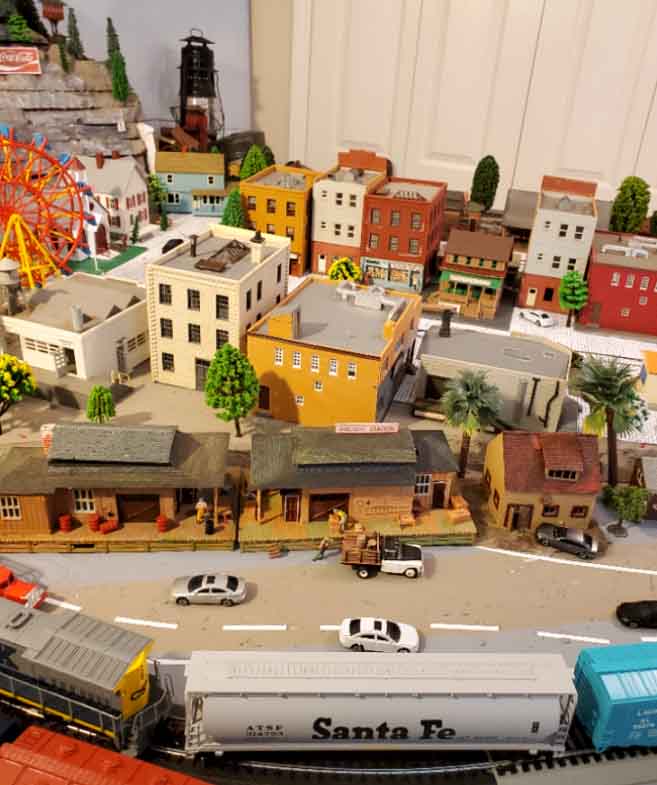 A big thanks to Bob for sharing his Santa Fe model trains – I do love how so many of have your trains in boxes for years and years. When they see the light of day in retirement, that’s when all the fun starts.