I am constantly amazed at the skills shown in your posts from people! I thought I would offer a few of my humble attempts at creating my two stations on my layout.

This is an update as I sent a few early stage pictures last year.

One is a through station which has a junction on each end permitting trains to come off the main lines into a station platform without passing though a station on the main line every few seconds! This offers more interesting train working within the confines of a loft space!

This arrangement permits the train to change engines from the nearby engine depot ( not complete!). The terminus station feeds from one direction only off the main line via the through station taking a slow middle road through it before entering the terminus station on the other side of the layout.

It is the old fashioned analogue so isolating sections and switches permit the engines to be uncoupled at the front of the terminus platform and a replacement engine to be backed on at the other end. The buildings are out of the box items as I said before as I have not got the great skills shown by many of your contributors (or the time – later perhaps!).

I have weathered many of the station features and is roughly based on the Western and Midland regions in BR days in my case the 1960’s. The terminus roof looks part finished and this is deliberate!

I am planning to put scaffolding round the open end suggesting the overall roof is partly dismantled and will be demolished in the the near future – which was common place during this period ( a pity but that’s another discussion).

Sorry no trains on it yet as they are still in the boxes while I get the stations up and running and the scenery behind them, I think some work on the sheds and then trains can run again after a thorough track cleaning session! 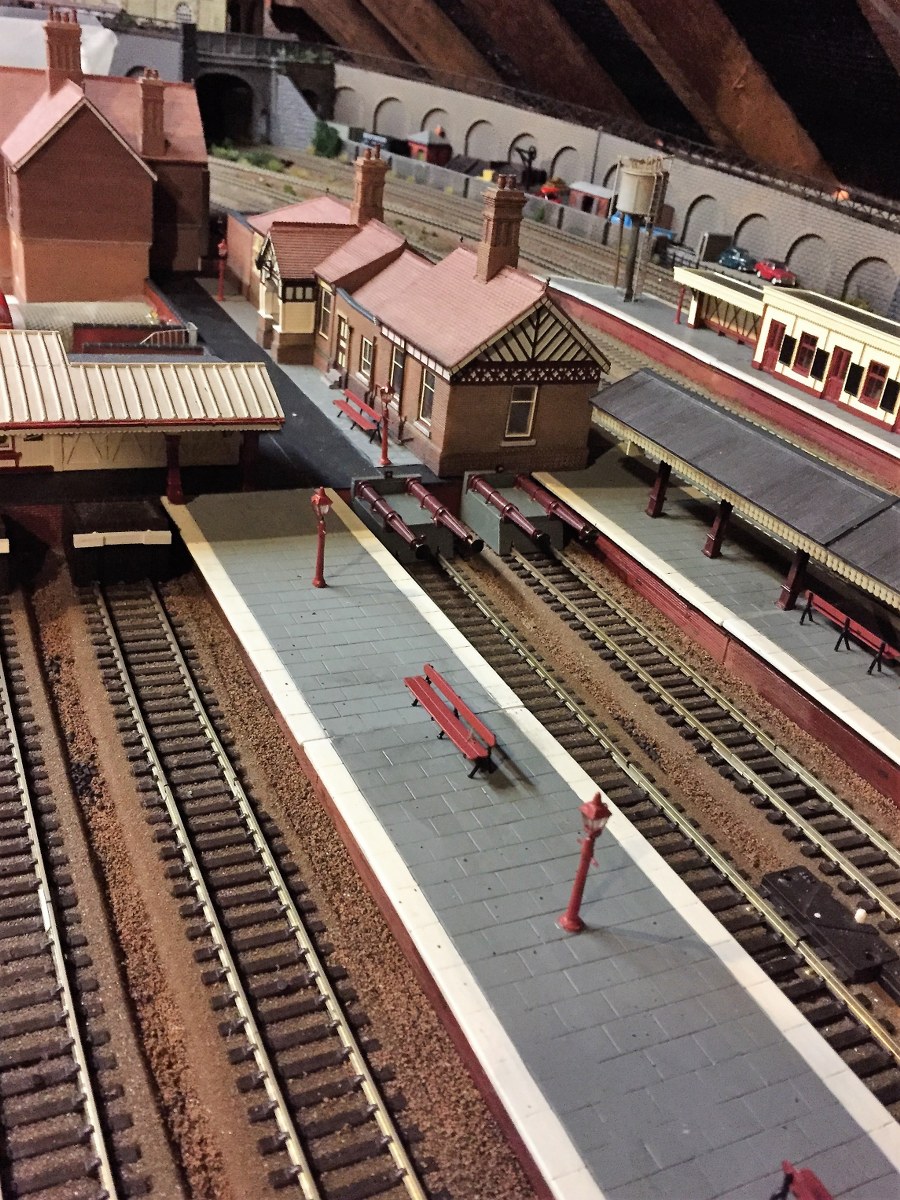 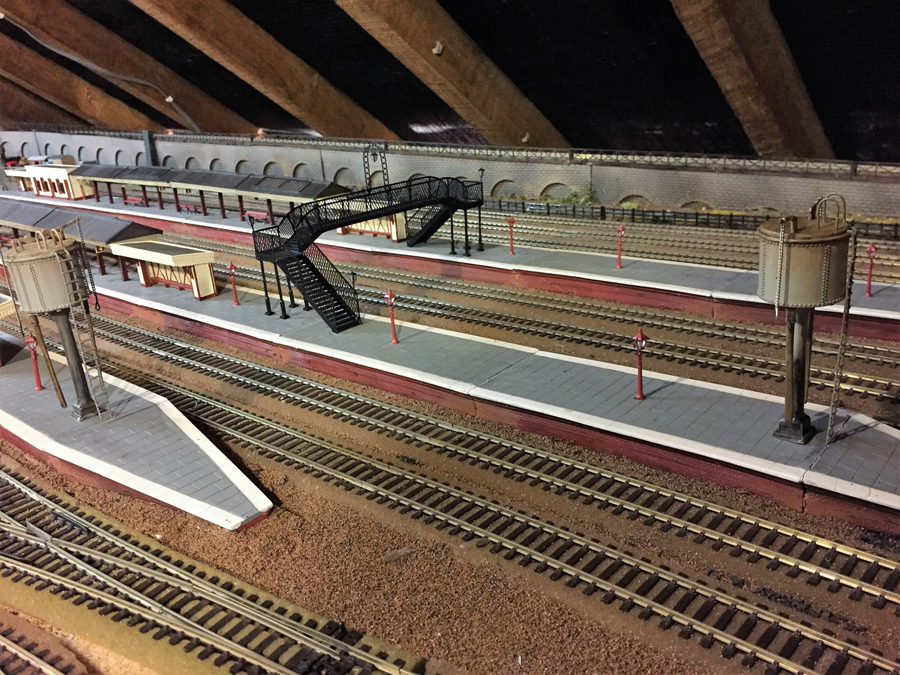 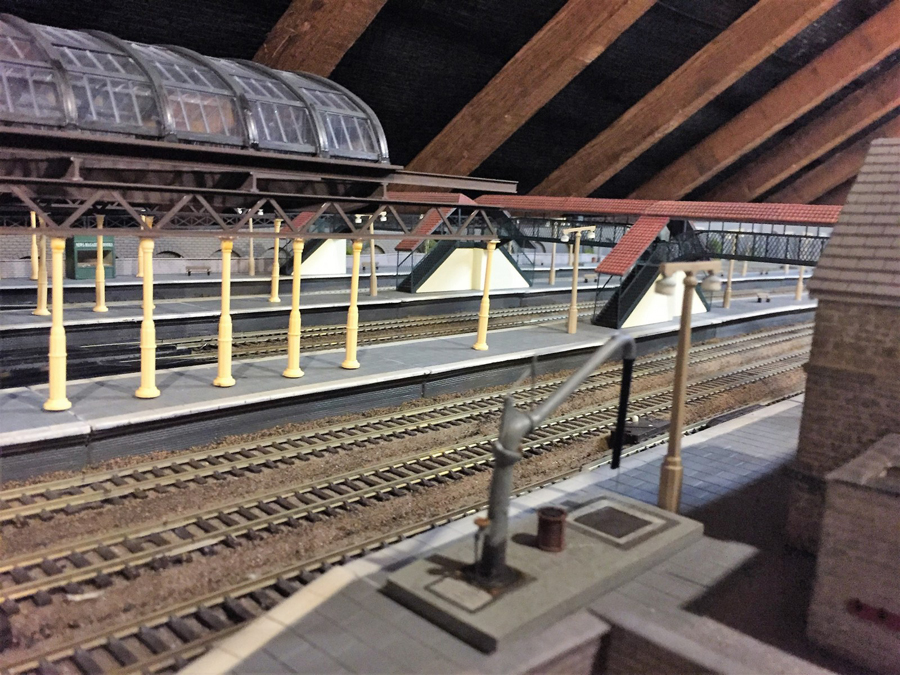 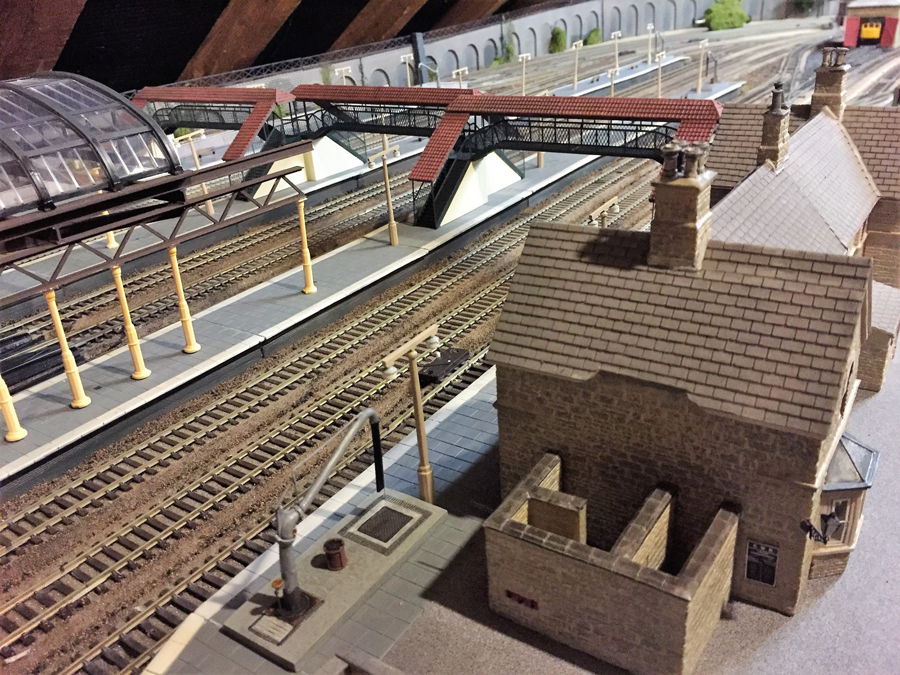 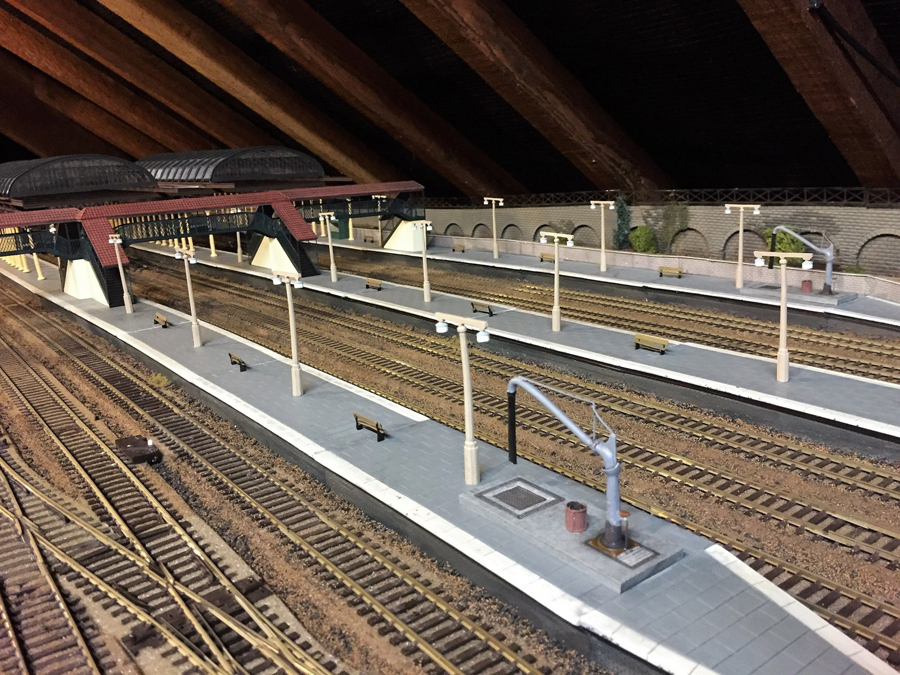 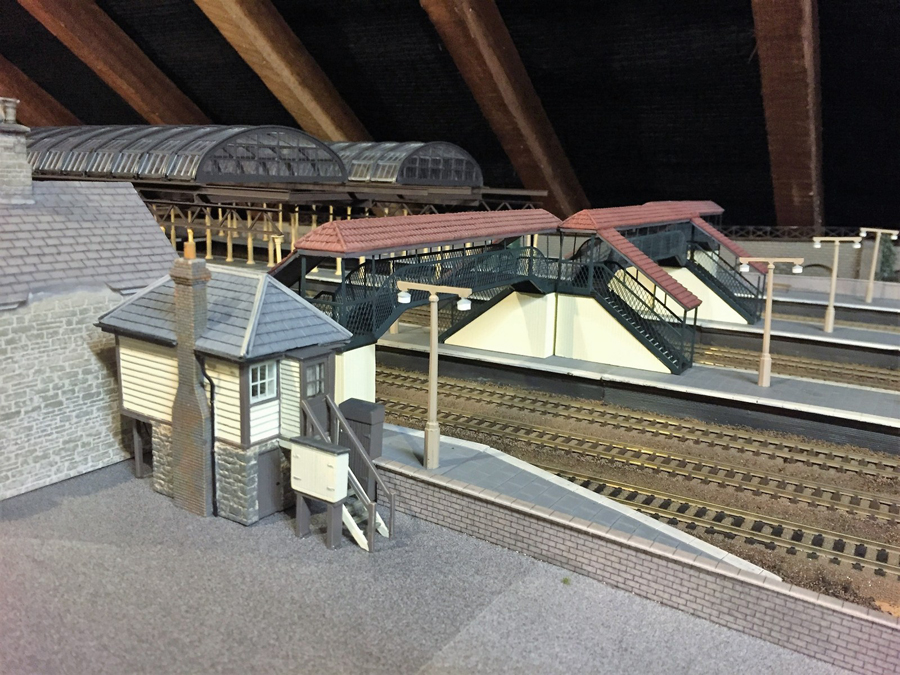 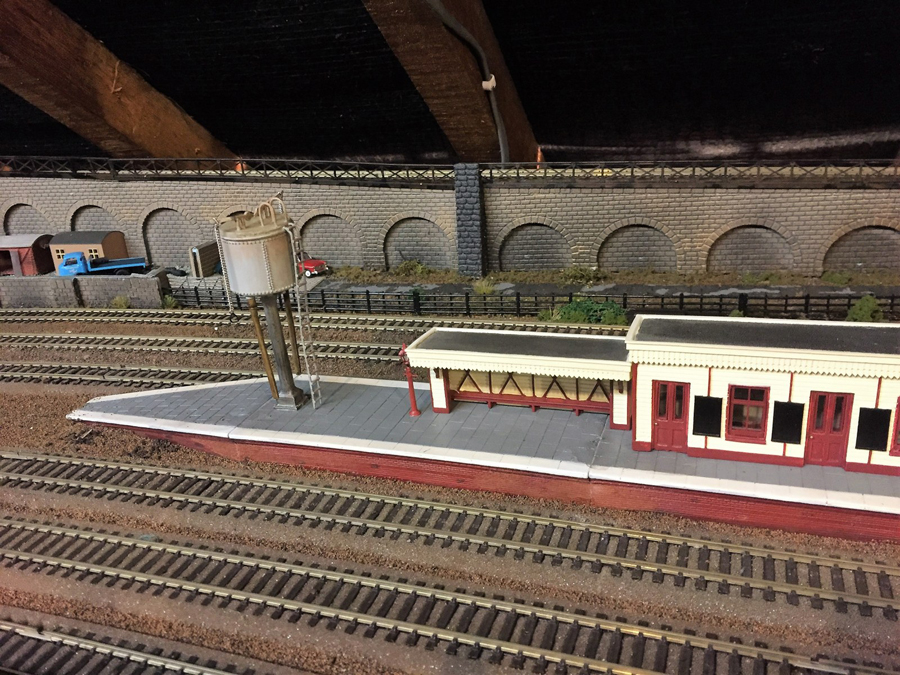 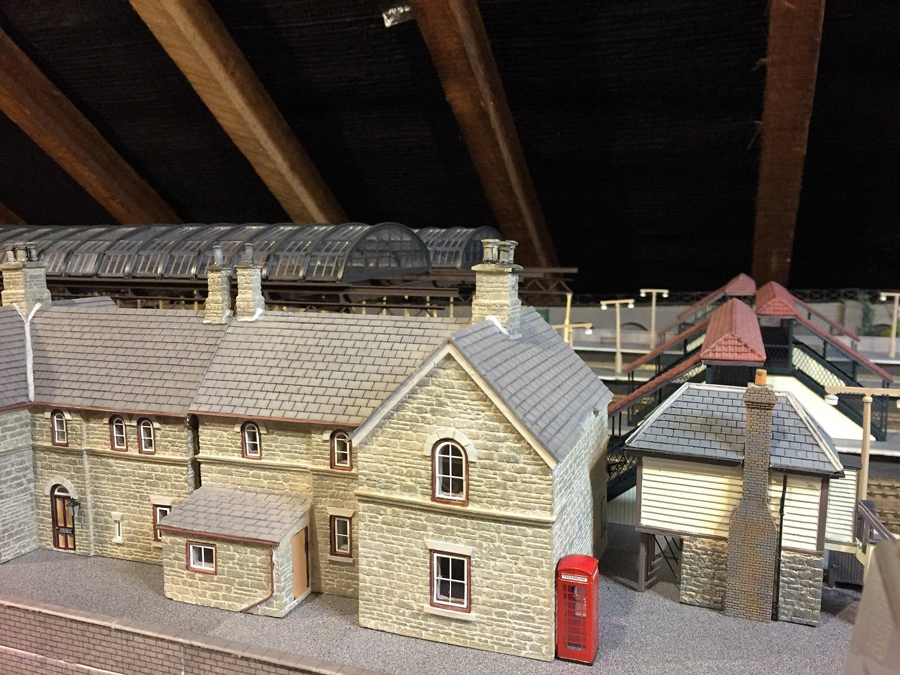 Thank you for the many layout suggestions, from yourself and many others.

Attached are some photos of how I build elevated or hillside track. I use 4 foot ceiling tile “tee rail” from Home Depot, and this makes for easy slopes and level runs. The tees are topped off with 1/8″ press board.

One picture shows a notched column made from 1×2, an example of how to raise and support the tees. I used a brad gun to attach braces and columns. But I used caulk to lay the press board on the tees, to keep the press board smooth and even.

The tees can be notched underneath for tunneling track.

Another photo shows the convenience of hiding lots of electronic gear under the long “tee” spans. My layout so far has four automatic reversing loops using Atarax prefab circuits with optical sensors.

Another trick: “Cheap” wire in long lengths, and with efficient multistrand core, can be had from Harbor Freight or your local parts store in the form of trailer wiring kits. They come with 24′ continuous lengths multicolored.

Hope these ideas are useful if not new. 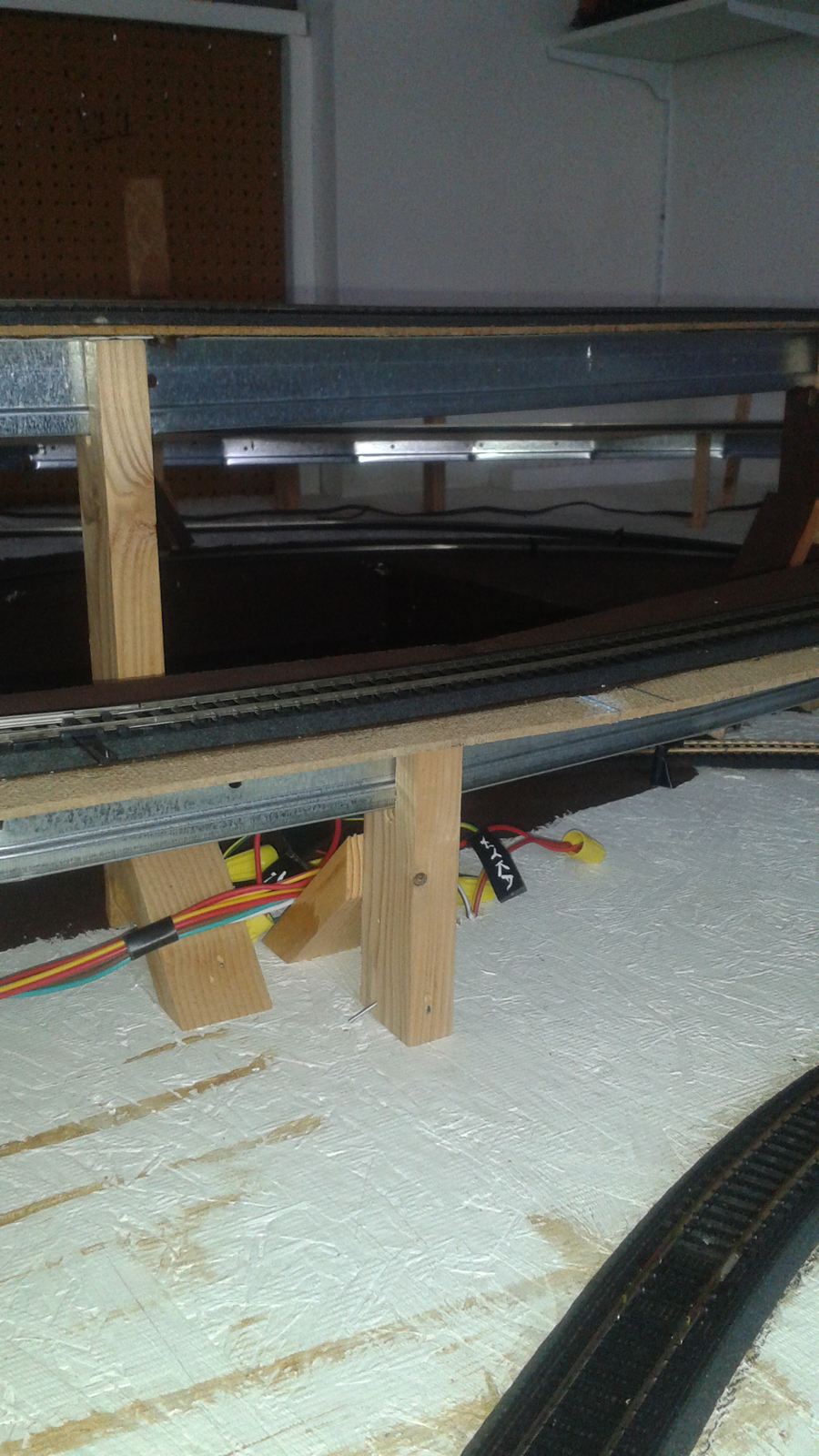 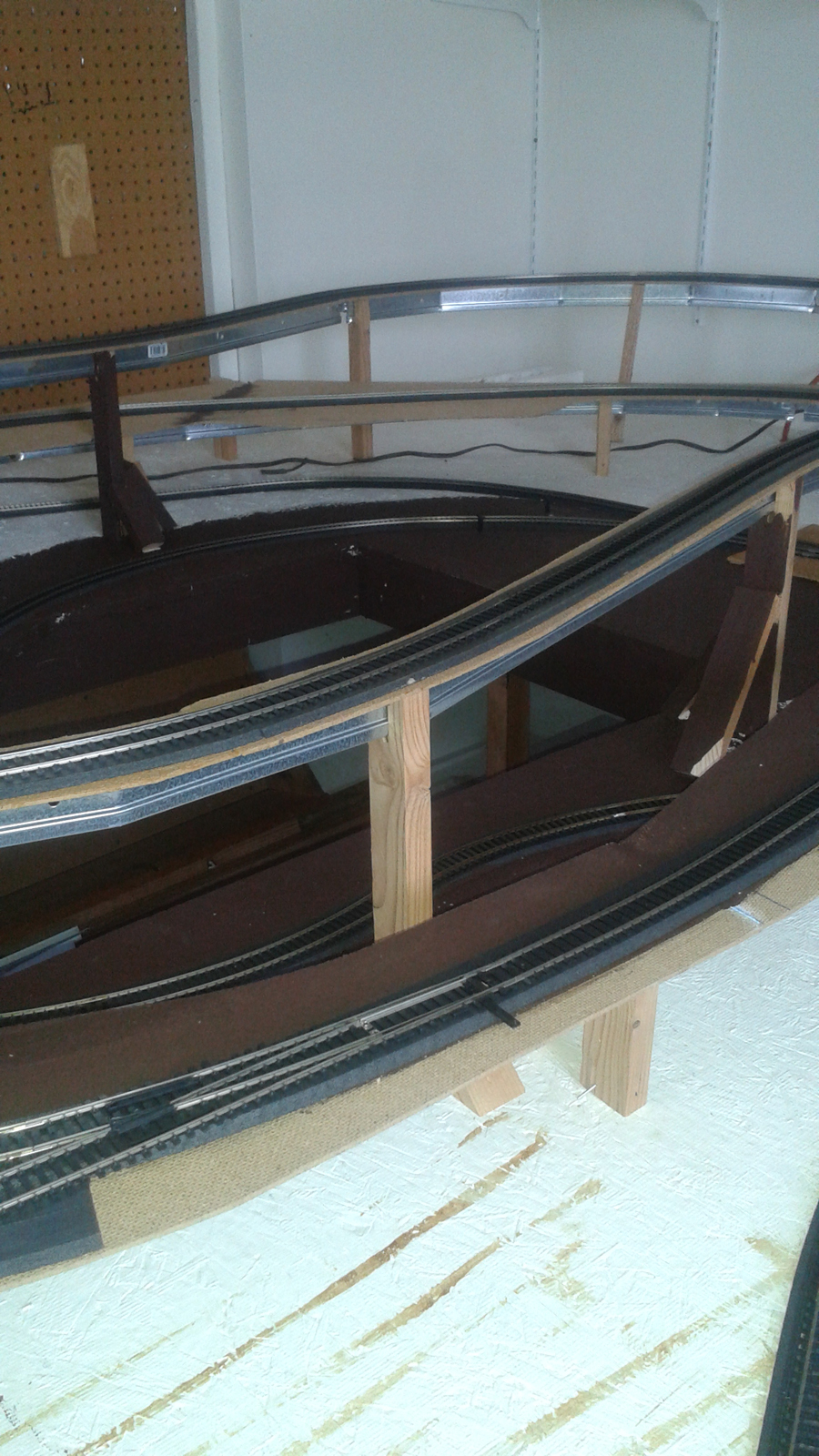 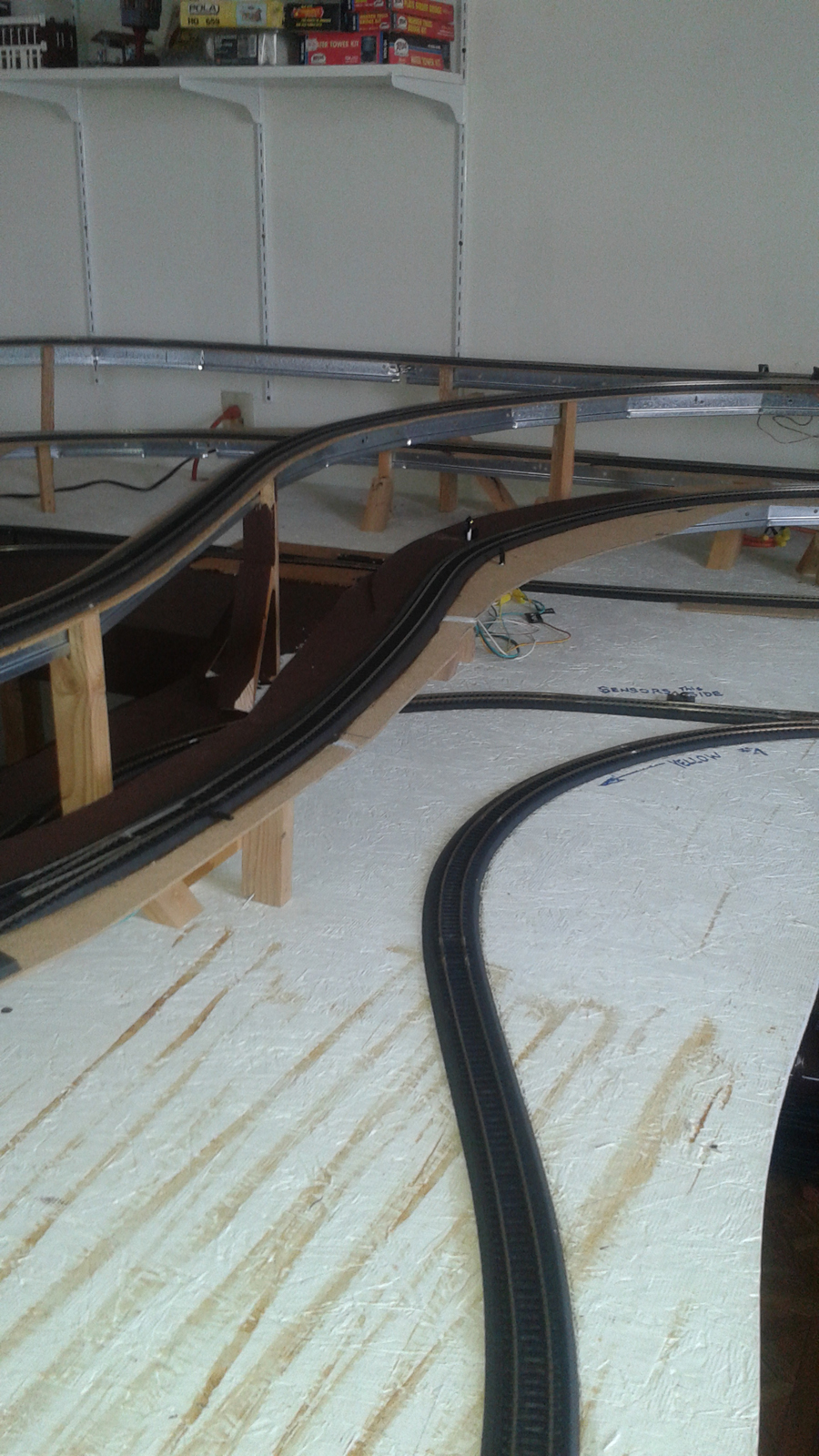 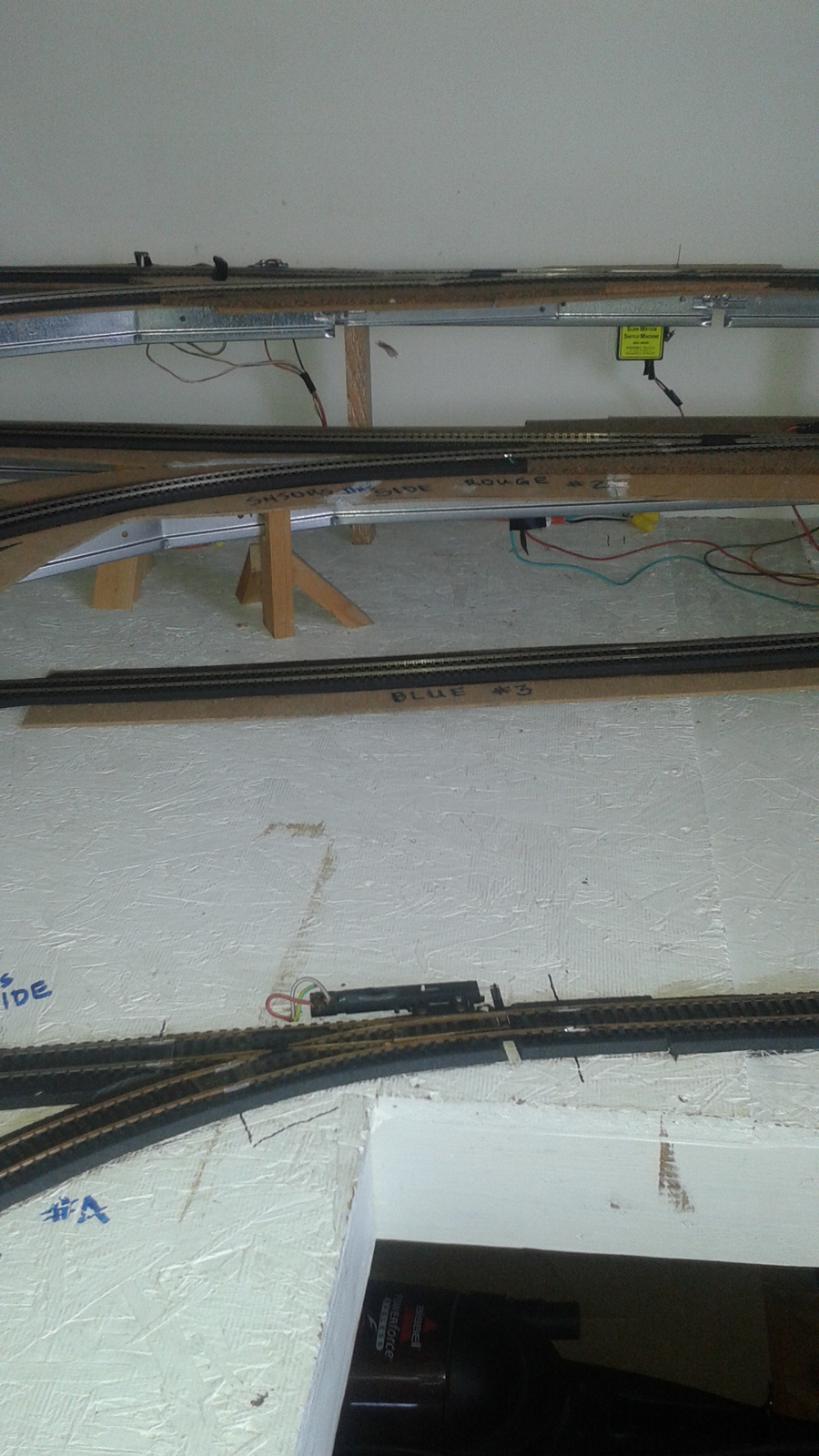 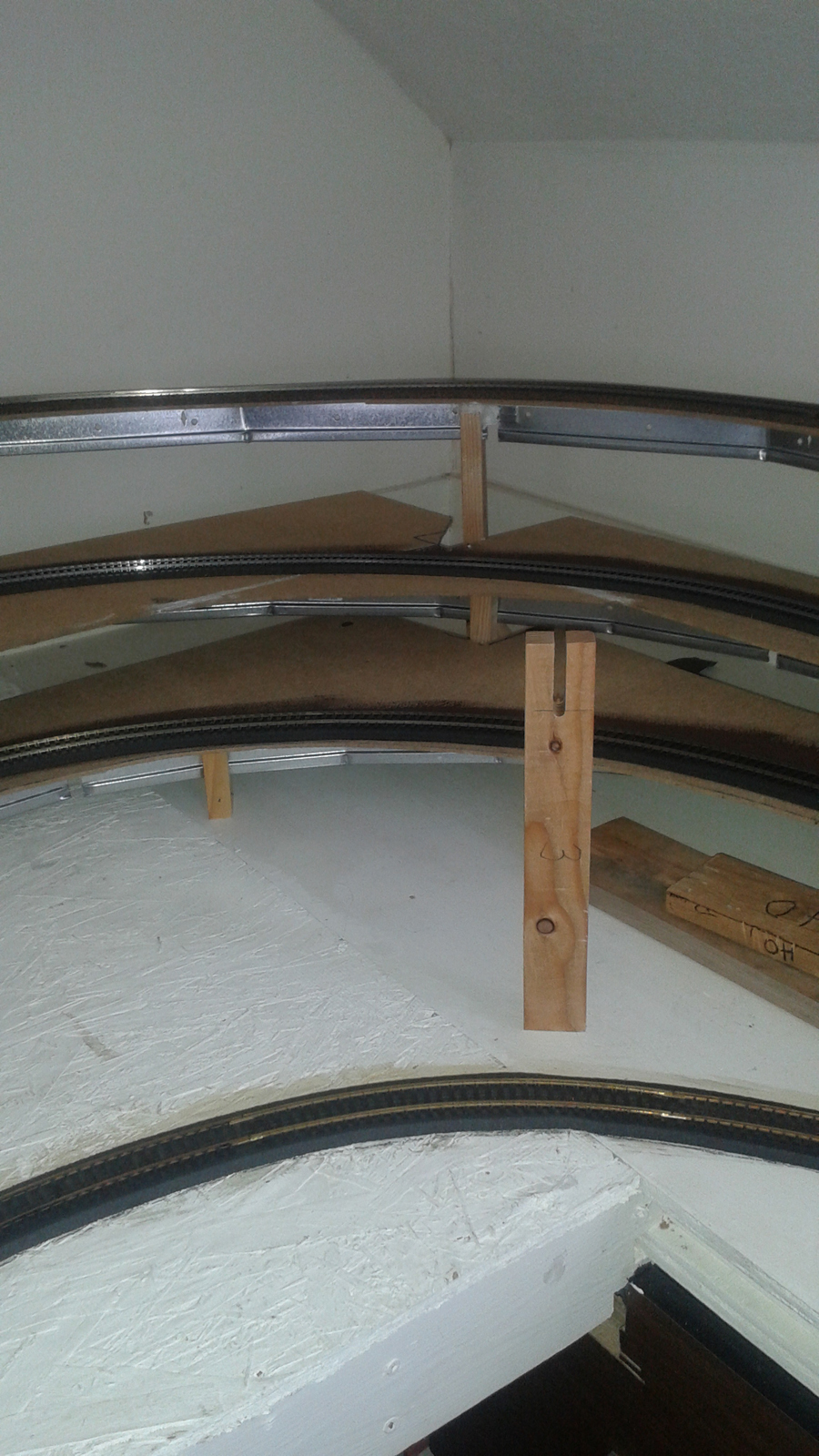 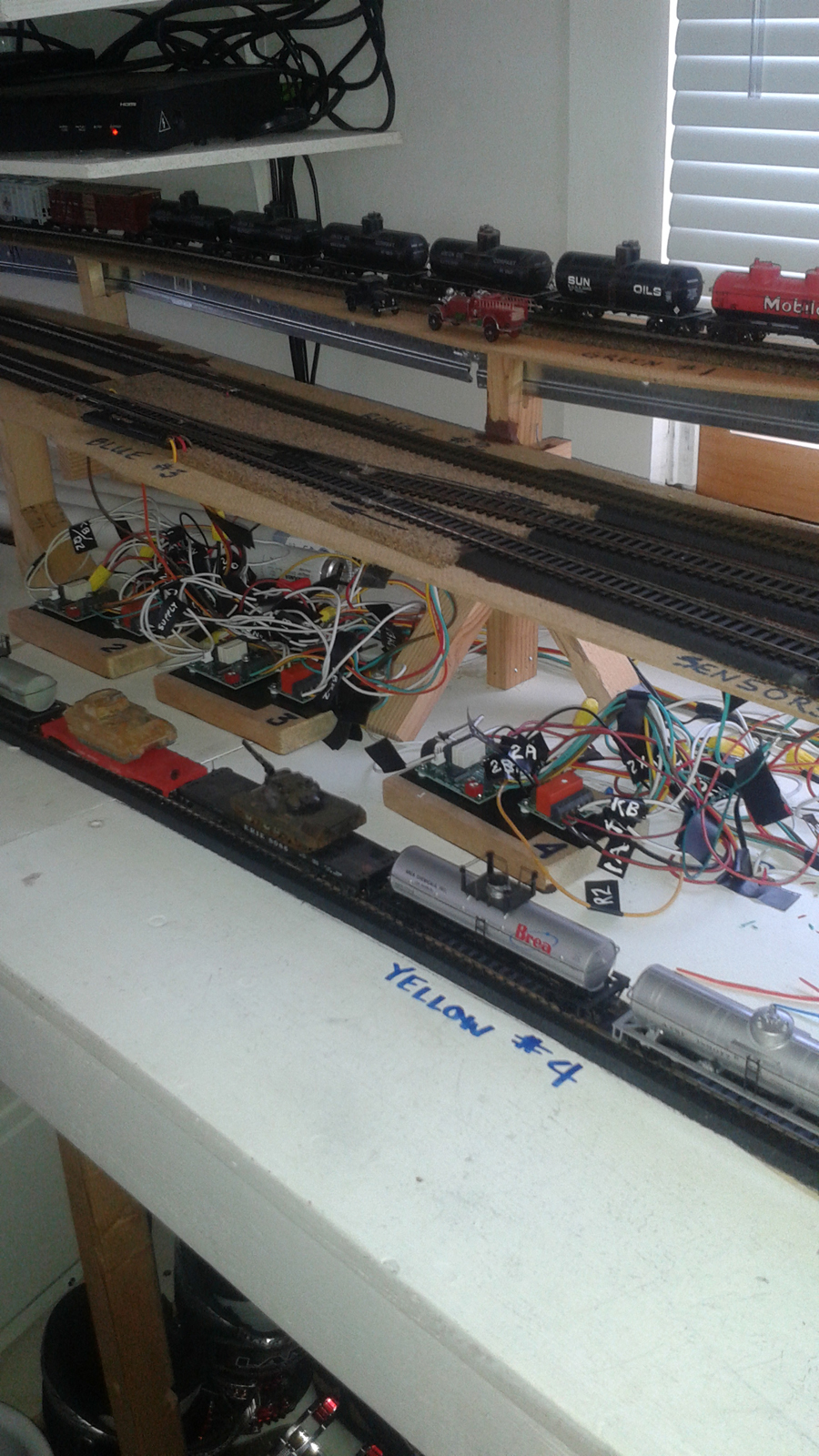 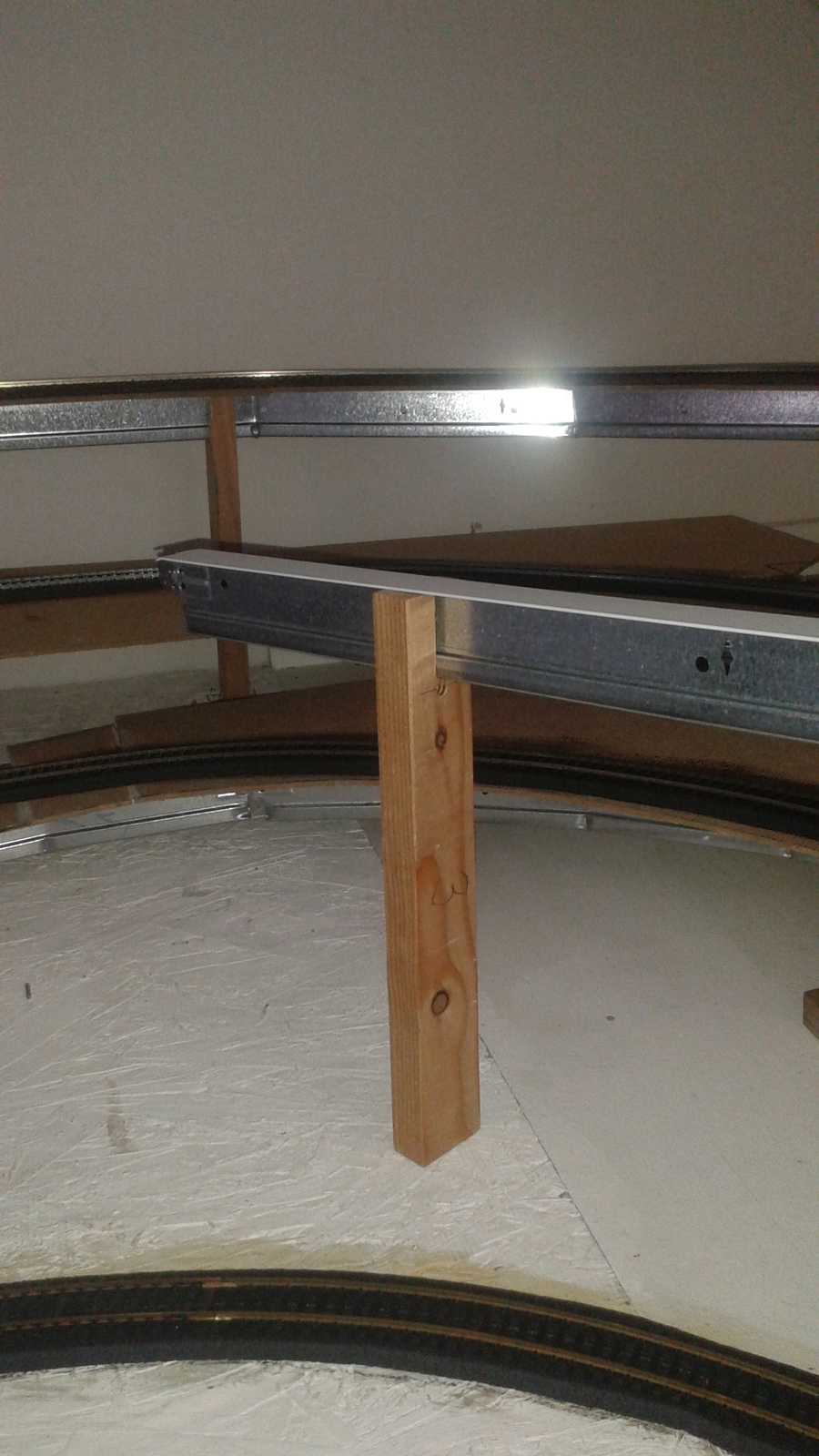 A huge thanks to Steve and Dennis.

I’ve been doing the blog a number of years now, yet I’m still surprised at what comes in sometimes. You really are a clever lot out there.

Thanks to everyone who has sent in a contribution – and this is probably a good time to say, if you’ve sent me something and I’ve not replied, please be patient. I get a gazillion emails a day and I do my best.

That’s all this time folks. Hope it’s inspired you to get off the side lines if you’re still haven’t rolled up your sleeves.

And don’t forget the ebay cheat sheet. Bizarrely, I still get a lot of mails about. Glad it’s working out for you all.