Terry’s been in touch with a wiring tip:

“Al: I thought I might pass along a tip for the dinosaurs (like me) who are still running trains using regular DC analog.
Wiring the individual blocks can be a nightmare and, if not done cleanly, can become a real mess hanging under the table. Using the space under the table for extra storage I have at times inadvertently snagged the train wires and created dead or shorts on the layout.

Living in a cold climate it’s recommended that indoor pipes be wrapped with insulation to prevent freezing. Thinking about that one day I realized that the foam pipe insulation–which is split down the length of the piece for easy wrapping around existing pipes, could also be used as a compact covering for my existing train wires. Not only does it make everything neat and tidy but it is cheap: under $2 for 6 foot long pieces that can be cut to any length.

I’ve attached a couple of “before and after” pictures to illustrate the tip. (I’m not proud of my wiring attempts but it gets the job done).

FYI –construction of the “Damnit 2″ railroad expansion project has resumed after a year of indecision’s and I’ll be sending you an update in the near future.

Keep up your good works. 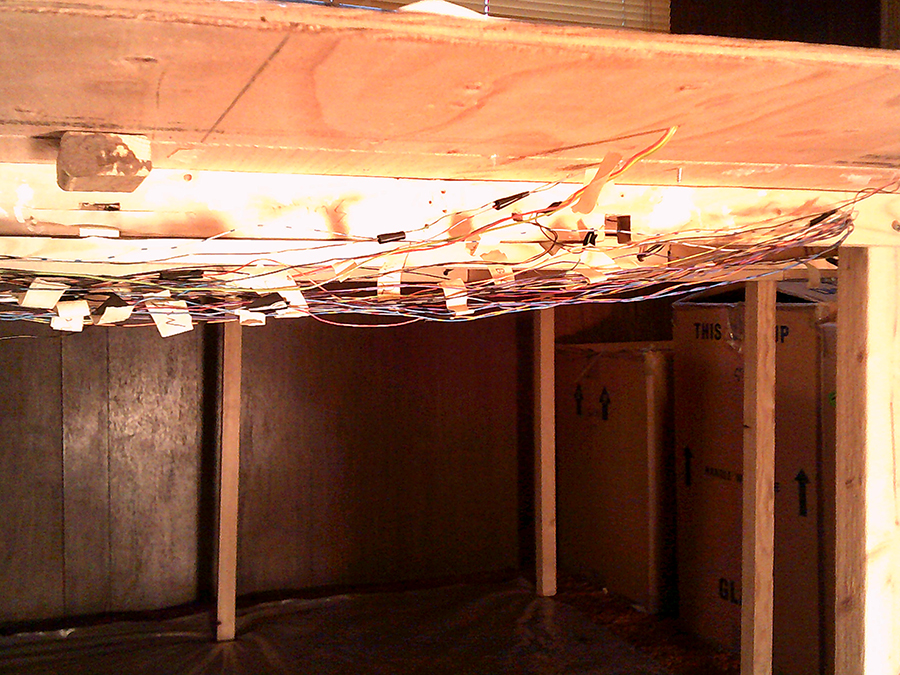 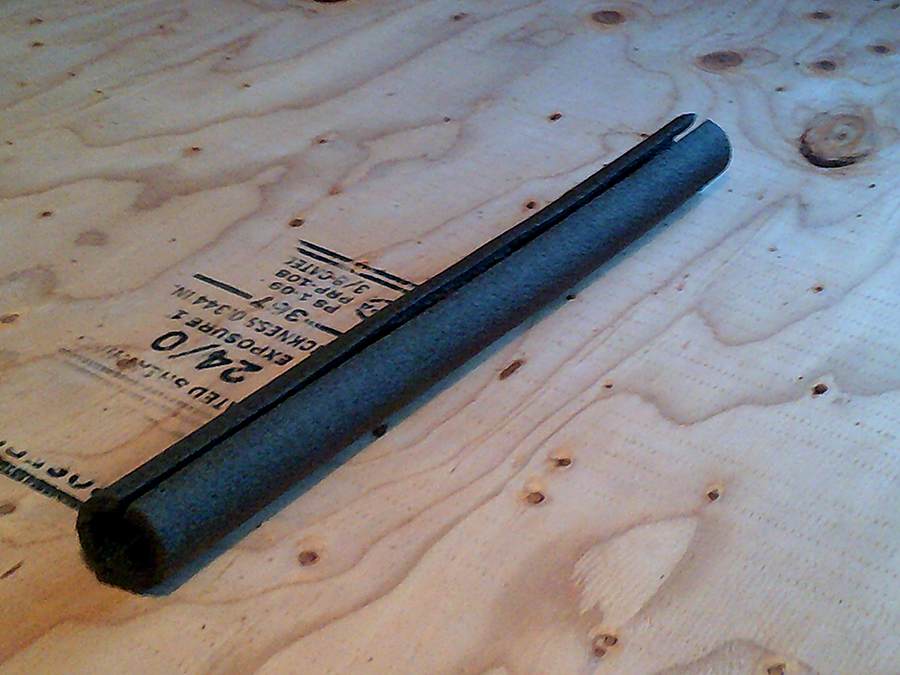 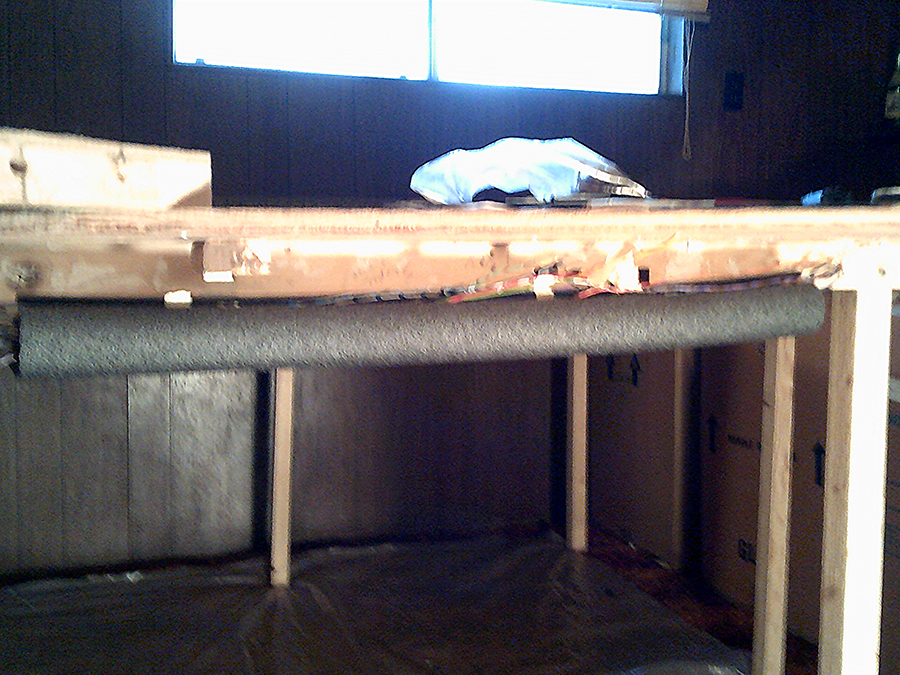 And now on to Bill who is getting in to the festive spirit.

He also shows in spades that a layout can be whatever you want it to be. There are no rules!

“My layout is done to “O” gauge scale. It measures 12 by 9 feet, is L-shaped, and features 3 trains. It’s a two tiered arrangement that consists of 2 major loops of track.

I also operate a LIONEL TINPLATE, which is over 100 years old, on a dead ended commuter line. The upper loop carries an MTH RAILKING BANTAM STEAM TURBINE that weaves through a station and adjoining towns.

The lower loop is reserved for faster, long range travel with a WILLIAMS AMTRAK GENESIS LOCOMOTIVE pulling a set of FOUR DOUBLE-DECKER STREAM-LINER CARS. It is basically a seasonal effort and is only set up for viewing about 2 months each year. Then, back in the boxes it goes.

The theme for this year’s layout was the Disney movie “CARS.” In that animated movie, cars were made to actually talk.

Some background, a “hot shot” racer named Lightning McQueen was on his way to probably the MOST important race of his life when he gets lost and ends up in a forgotten town along U.S. Route 66 called “Radiator Springs.” This is quaint little town, located on old Route 66, was by-passed when a major super highway was built. The little town is now somewhat of a ghost town.

McQueen gets arrested for speeding by the local Sheriff, goes to Court and is sentenced by the judge, Doc Hudson, to some HARD road work. Now, McQueen, a well-polished, finely tuned, powerful racecar, is quite indignant as he is assigned to pull the dirty, smoke and fume-belching Bessie, the road paving machine, as his punishment. While detained at Radiator Springs, McQueen meets the pretty blue Porsche, Sally, along with a bunch of other delightful characters.

Each of these characters teach McQueen some good lessons that help him discover that there is more to life than trophies and fame.

Many of the items used were modeled or generated by me. These include BESSIE, the FOUNTAIN, the CONE MOTEL units, the MOUNTAIN BACKDROP, various buildings and signs and even the smoke. An item that was particularly useful was a WEED. This long stemmed plant that grows along the roadside here in the Northeast was very useful to blend the color of the mountains and the dry desert sand. It was also used to cover seams and lines.

Models of CARS were purchased at the DISNEY STORE. Some came with a talk box that contained quoted messages from the movie. They would speak if the model was dropped or bumped. One quote by SALLY, the PORSCHE, is “Hey, Big Guy – not so rough!” She still speaks after 10 years! How about being in the house alone without the TV or radio on while unpacking some of this equipment and suddenly hearing a voice tell you “Not so rough!”?

Attached are some photos of the layout and an explanation of how I blended my impressions of “CARS” with the existing Christmas Village. This Christmas Village features an automatic train station where passengers actually “come & go,” a mountain lodge overlooking a frozen lake with skaters, churches, schools and homes. All this while Santa and his eight tiny reindeer circle overhead. 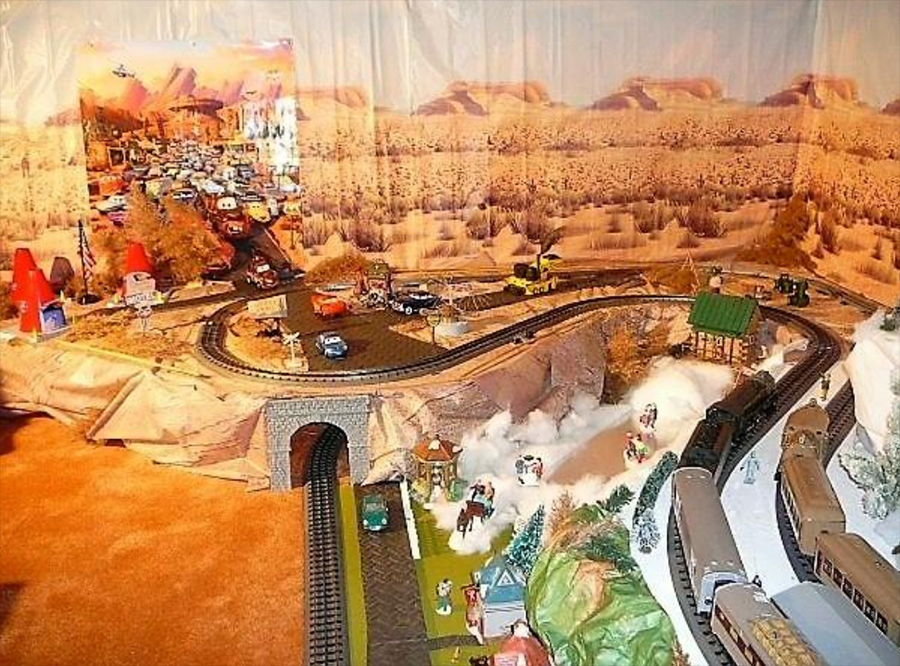 OVERALL VIEW showing the town of Radiator Springs encircled by the railway. The Cozy Cone Motel at far left. A mountain backdrop with poster showing the town’s people gathering to witness the road repair project. McQueen and Sally at the crossing, Mader at the base of the hill and the Sheriff and Doc Hudson looking on.

The backdrop is a tablecloth purchased at the Party Store and the poster was an advertisement for the movie “CARS.” 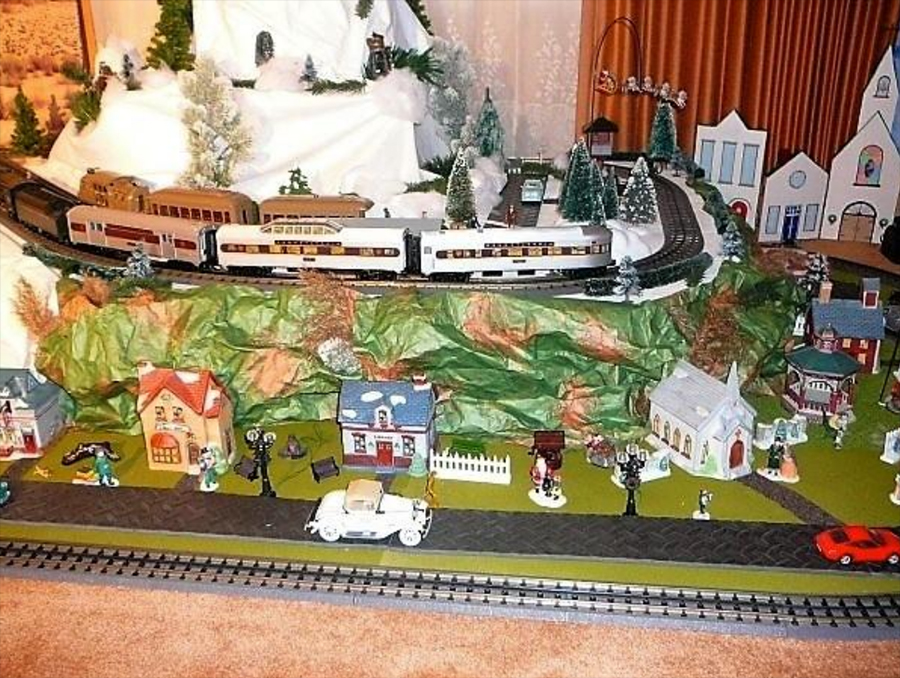 Frontal view of the CHRISTMAS VILLAGE. To the right of Radiator Springs is the Christmas Village. Features are the frozen lake in the valley with ice skaters, a mountain lodge, a train station and a quiet grouping of churches, schools and houses with Santa and his 8 tiny reindeer hovering overhead. Can you and your readers find Santa? 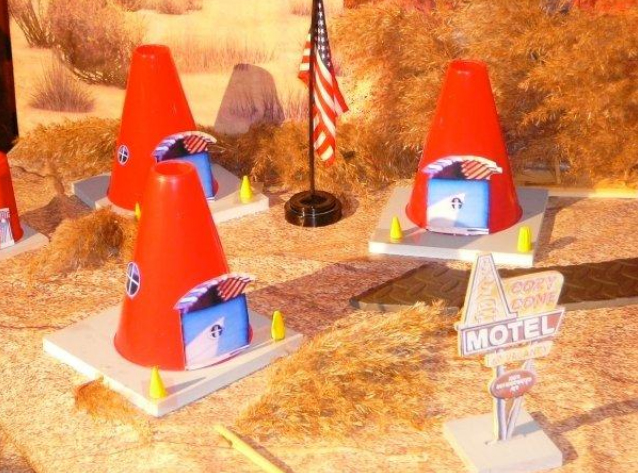 Close-up of the COZY CONE MOTEL. This is where SALLY, the blue Porsche, resides during her stay in Radiator Springs. The housing units are plastic, kid’s megaphones from the Dollar Store. The awnings, windows and doors were “cut & pasted” from enlargements of photos taken of the movie scenes while watching the movie on TV. The cones are attached to plywood squares, painted and decorated to look like concrete pads. 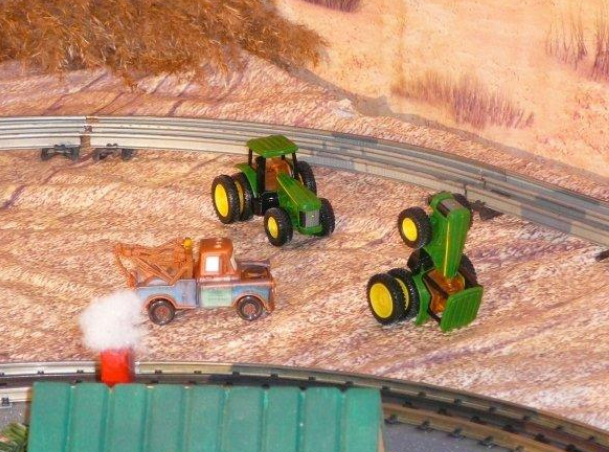 TRACTOR TIPPING. Mader gets into mischief by creeping up on the sleeping tractors (aka cows) at night then honking his horn or revving his engine to startle them. Then all hell breaks loose when the giant reaper (aka the bull) finds out. 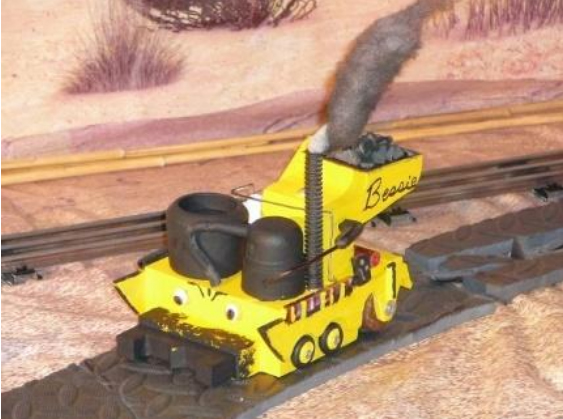 MESSY BESSIE. The dirty, smoke and fume-belching paving machine model is made of wood based on sightings from the movie. 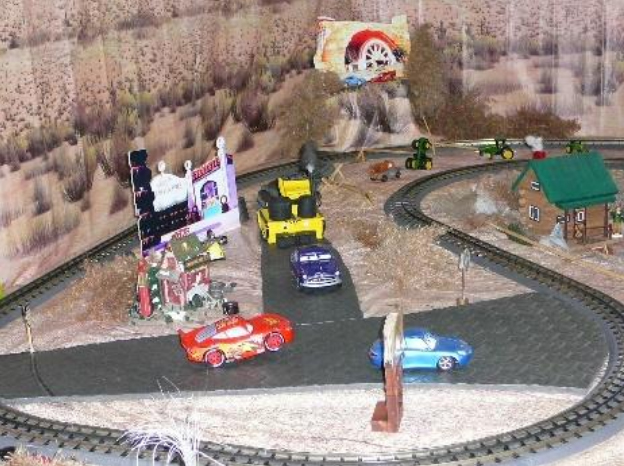 McQueen, with all his mighty power, was to pull her along as she chewed up the old pavement and spewed out a smooth ribbon of Macadam roadway. Picture shows intersection of Route 66 and Main Street in Radiator Springs. Doc Hudson himself shows McQueen how to hook up and pull Bessie. Slow and easy…McQueen is anxious to get underway. Sally observes at the crossing. Casa Bella Tire Co. is included with other town structures from the movie. The street pavement here is cut from black foam, ‘foot-eze’ flooring pads. 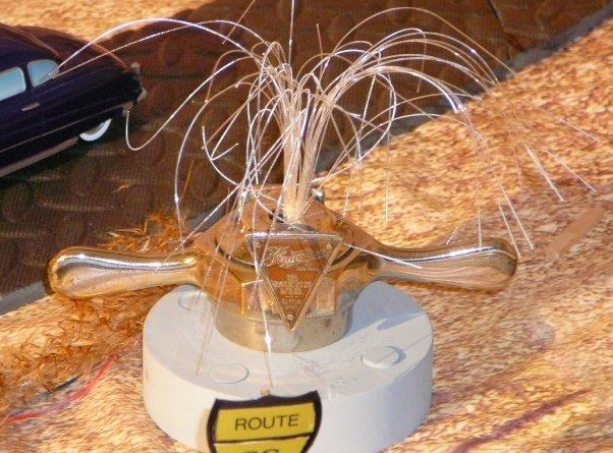 RADIATOR SPRINGS FOUNTAIN. A landmark in the center of town is fashioned from an actual antique automobile radiator pressure cap. The cap has fiber optic strands spraying like water that is lit from within the base below. 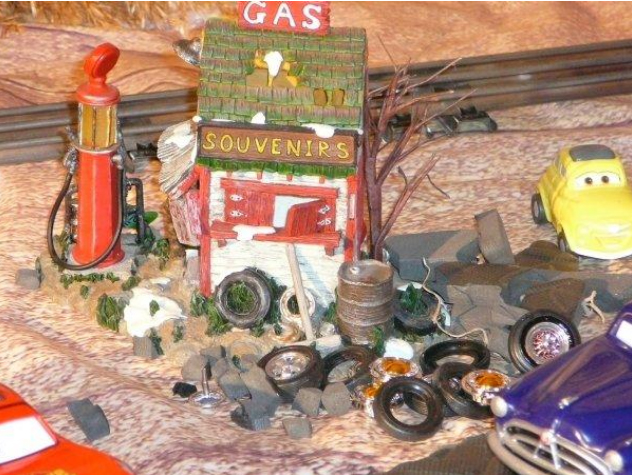 SOUVENIR STAND. Some enterprising town’s people are set-up to sell memorabilia (and other old stuff) to travelers that are MOTORING THROUGH TOWN.

As far as the TRAINS are concerned, I had many to choose from in my collection, there are 3 used in this layout. The 100 year old LIONEL TINPLATE was my FIRST TRAIN. It serves as a commuter on a dead-ended stretch of track at the station. 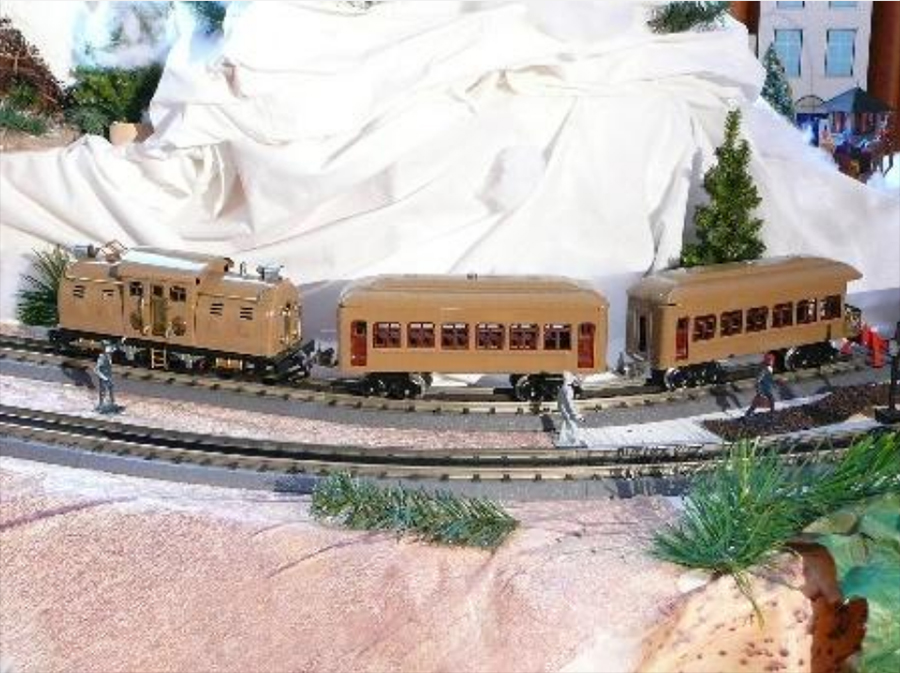 I have completely restored this antique LIONEL. The locomotive plus 2 cars were totally disassembled, stripped and professionally painted using the BEST base coat/clear coat URETHANE auto finish.

The color, DESERT SAND was matched to a swatch of original paint found on the underside of the roof. 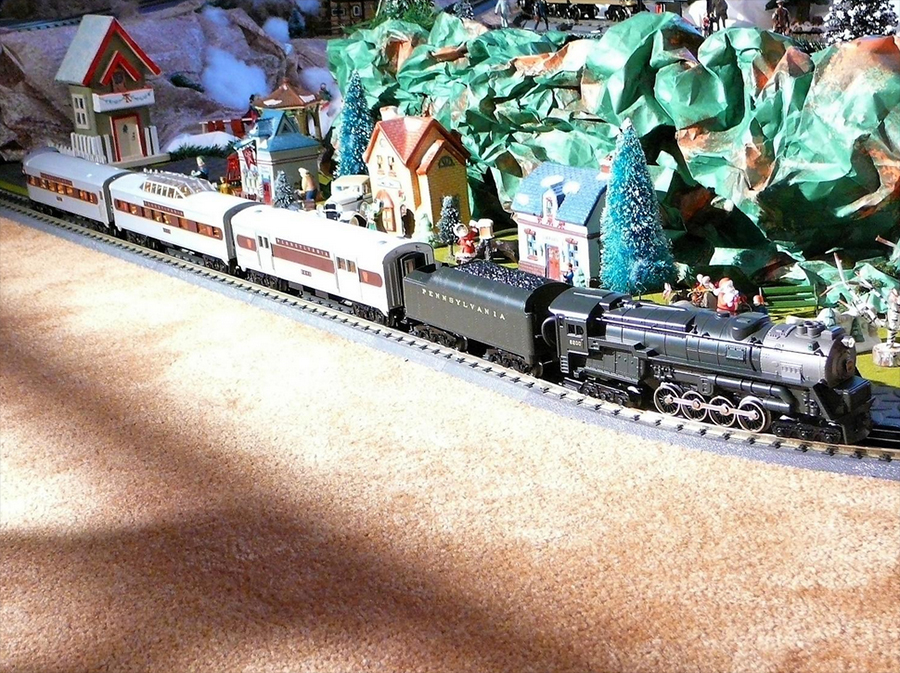 I also chose the BANTAM STEAM TURBINE by MTH RAILKING 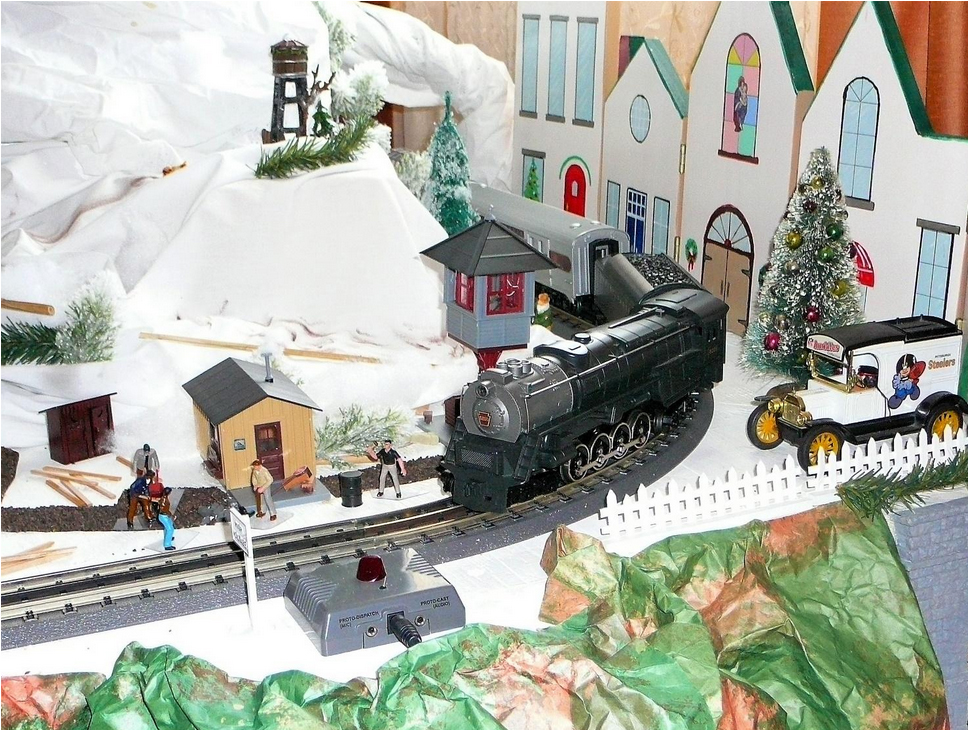 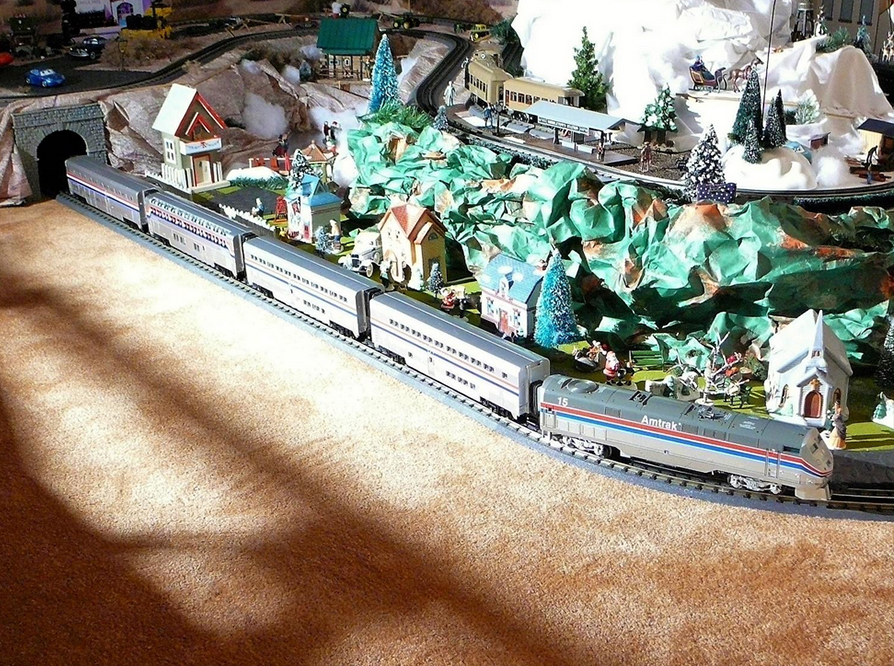 The AMTRAK GENESIS by WILLIAMS with 4 matched double-decker Superliner cars by MTH was chosen for longer distance travel. This locomotive has been refitted with train sounds by OTT to produce more authentic horn sounds including engine sounds that ramp up as train speeds increase. 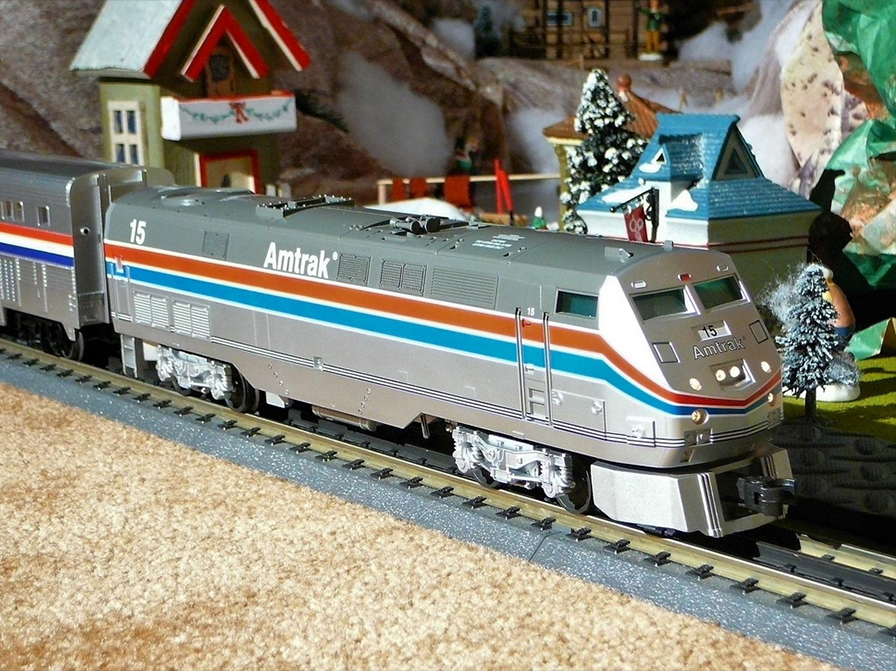 If one could see into the front cab, they would see that a green tint has been added to the windows. When under power, the inside of the cab is softly illuminated to show a pair of comfortable bucket seats with ENGINEER and the BRAKEMAN in place. The seats were taken from a model car of matching scale. The seats were simply glued in place to complete the scenario.

Answer to question——-> My Santa is elusive, just like the real guy, but he is there. Look straight up over the church in the foreground near the top edge of the frame in Picture #2 (page 3). He blends into the orange background.

I hope you and your many, many followers ENJOY my interpretation of the movie “CARS” and my TRAIN layout presentation.

A big thanks to Terry and Bill.

As I said earlier, your very own layout can be whatever you want it to be. That’s what I like about Bill’s.

After all, if you’re not going to have fun, what’s the point?

And don’t forget the Beginner’s Guide is here if you want to start your own layout. It’s a great way to take that first step.