I have been following your blog for some time now and using tips from your Beginners Guide.

I am a newbie working on an N scale layout based on my memories growing up in Florida.

Yep it’s completely flat! There are not any railroad tunnels in the Sunshine State.

It is modeled on the Florida East Coast Railroad. I am doing it in diorama modules that can be taken out to change a scene if the spirit moves.

The only things that are ‘store bought’ are the two trucks, car, animals (Outland Models, Japan), and the people (unpainted from Preiser, Germany).

Everything else is scratch built using tips and tricks from Al’s Beginners Guide and other pointers found here on the blog.

Thanks to all who give insight on how I can develop my railroad empire!

My wife thinks I am probably off my nut making narratives on all this, but I have Calhoun’s Moonshine till, Happy Gator Campgrounds, and Paul’s Pure Oil gas station in progress. This I can share at another time if you like. For today allow me to introduce you to the Goode Family Farm.

Welcome to the Goode Family Farm.

Nestled at the end of a dirt lane is the Goode Family Farm. Well, its more of a farmette. In this world of ‘N scale’, it is just under 5 acres. Although its small, there is a lot going on.

In the barnyard you will find Mr. Hank Goode standing next to the hay truck watching Bossy sneaking some hay before it is unloaded. Then there is Mrs. Franny Goode feeding the chickens at the chicken
coop. Mister the horse, and Berta the cow, are taking drinks at the stock tank. Maude and Grace are feeding on a hay bale while Paint stands alone in the pasture.

Bucky and Bonny go to the fence to have their noses rubbed by family friend Tom and his daughter Gail.

In the pig pen are the four pigs that will soon be ready for market. While it’s a quiet place, in the background you can hear the sound of the squeaking old wind wheel pump as the breeze blows the Spanish moss in the trees.

In the yard, the oldest daughter Anna is in the back yard hanging the laundry out to dry. Becky, the ten- year-old, can be seen swinging little brother B.J. on the tire swing. In the garden the oldest son Dicky is weeding the vegetable patch.

The farmhouse is a typical old Florida farmhouse with large windows for ventilation and a brick fireplace to add warmth on the occasional cool evening. The porch invites you to sit on the rocking chair or the porch swing while you enjoy the aroma of the potted flowers.

When the evening rain falls on the tin roof it lulls the Goode family to sleep. A well-deserved rest after a hard day’s work.

Hey, thanks for stopping in. Y’all come see us again now hear? 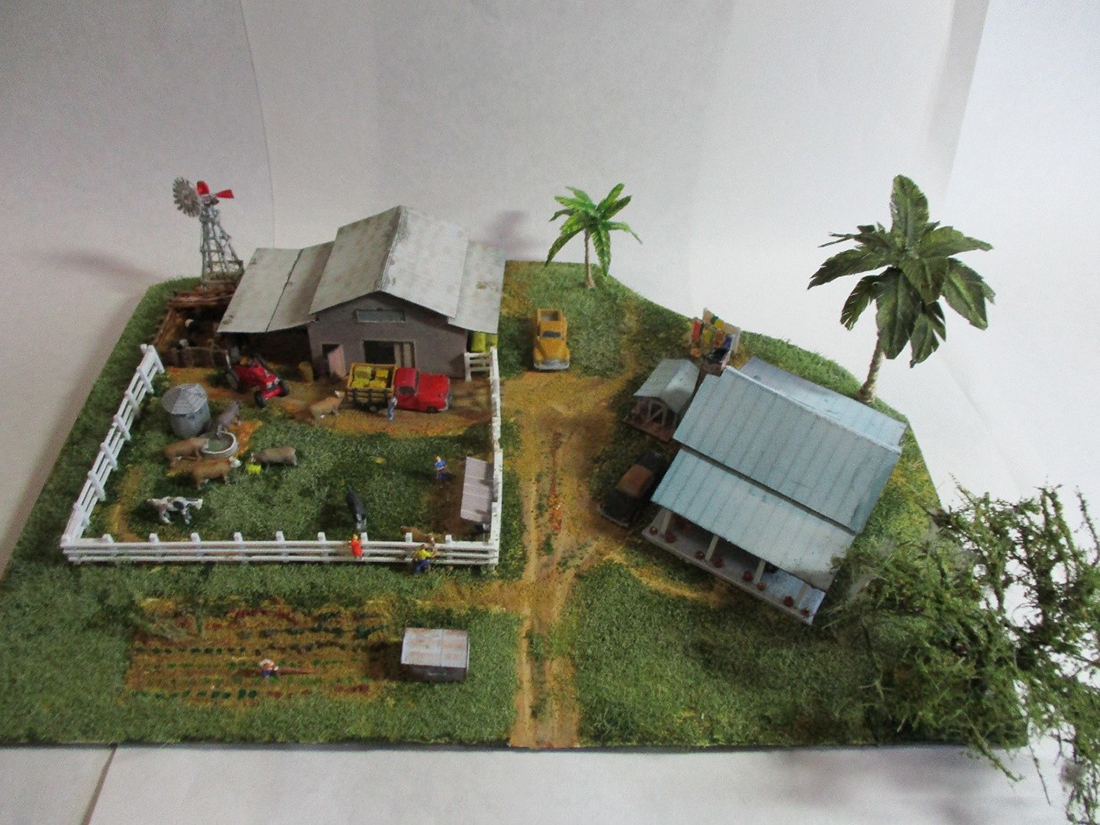 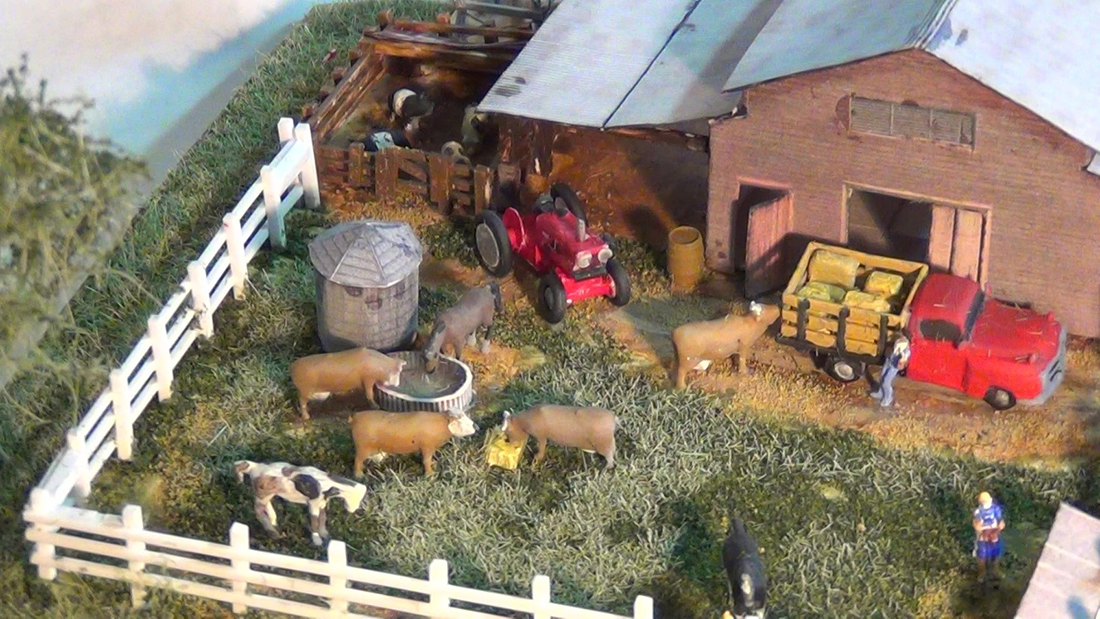 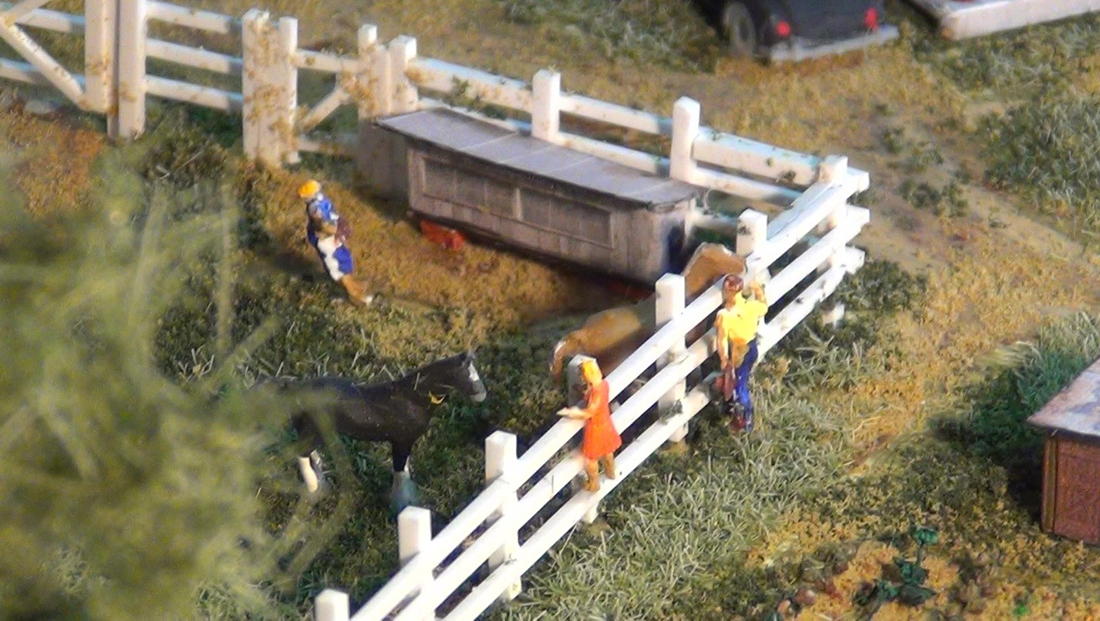 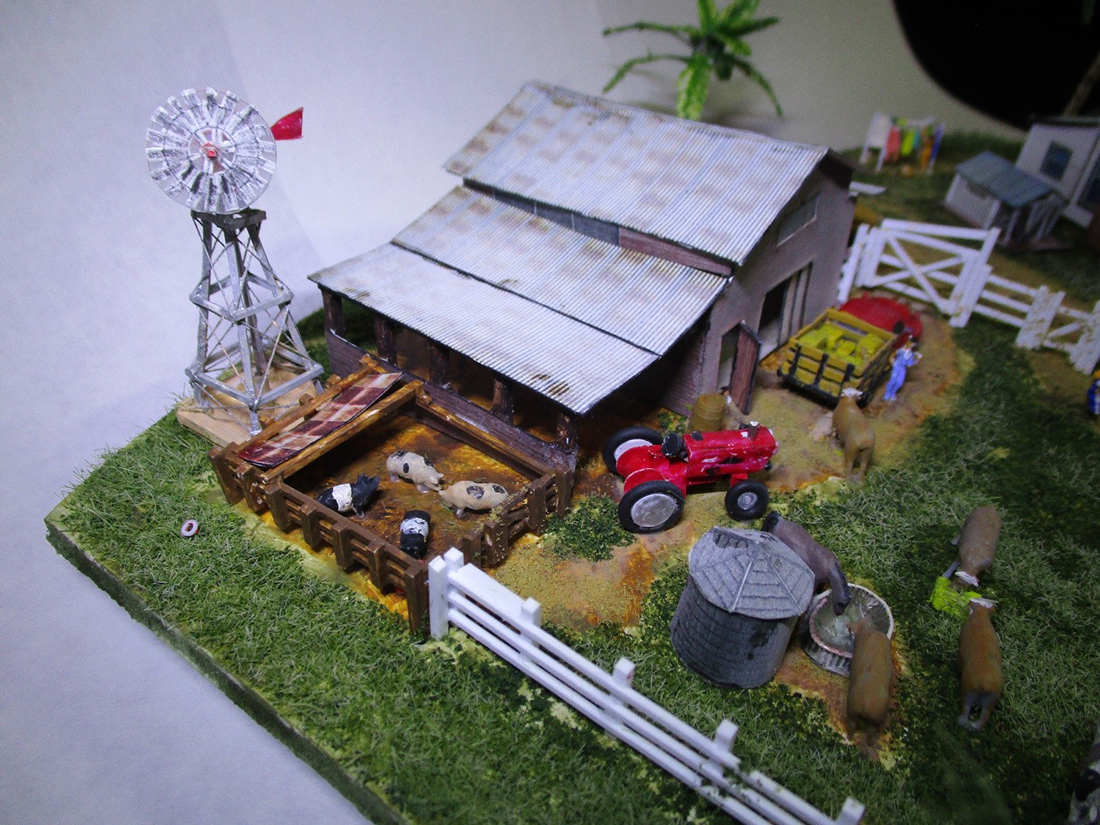 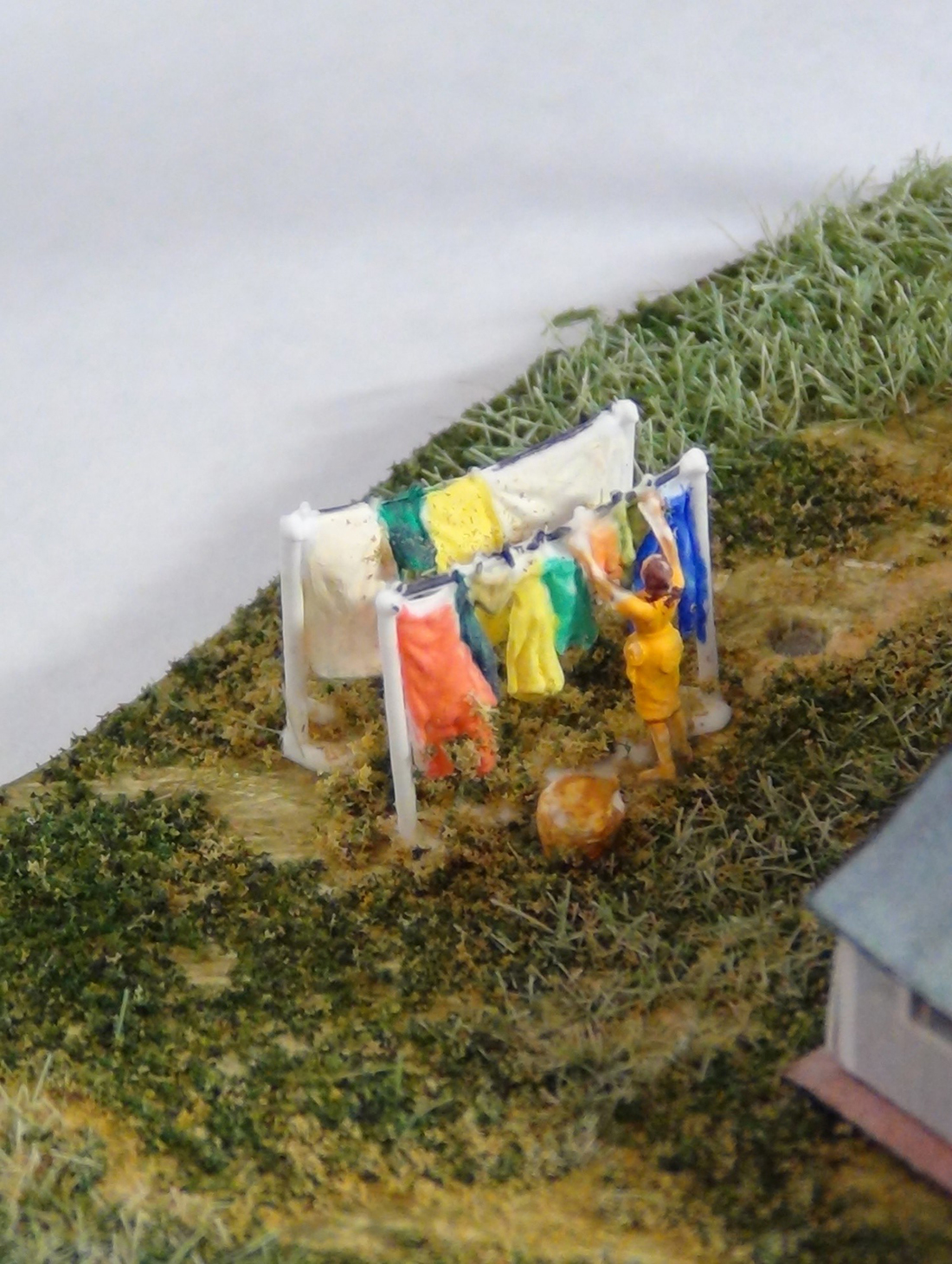 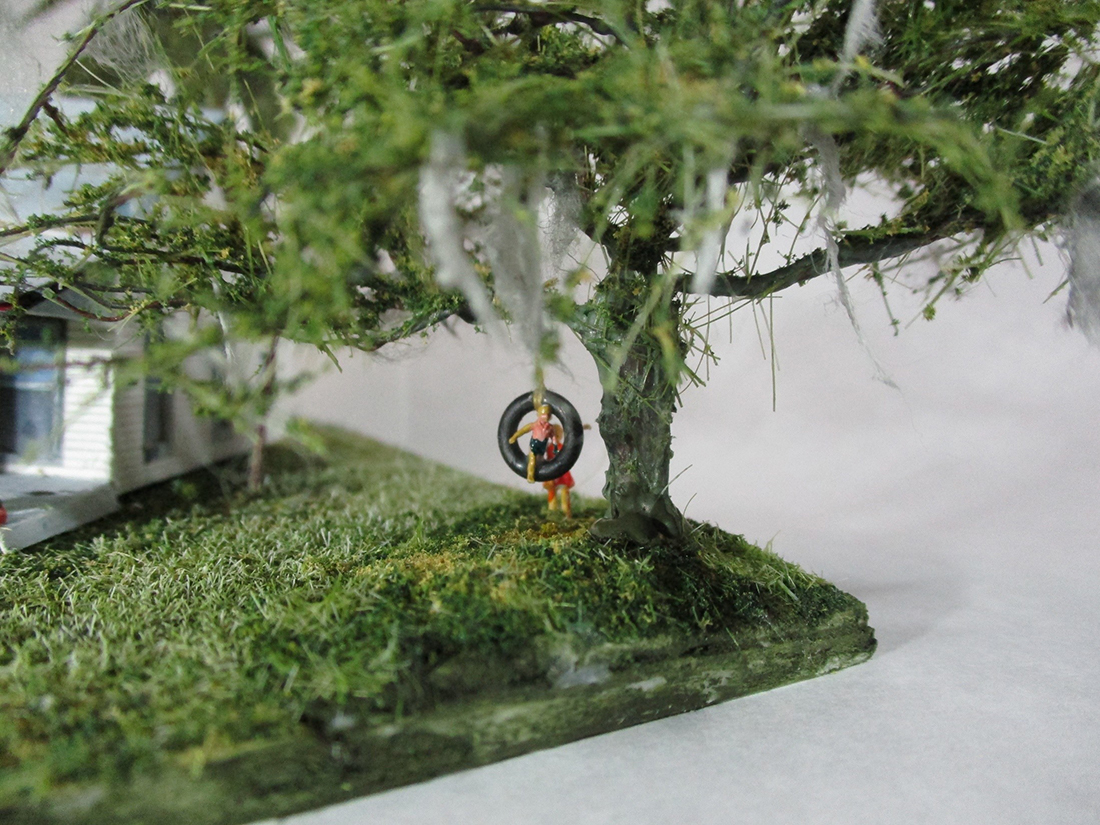 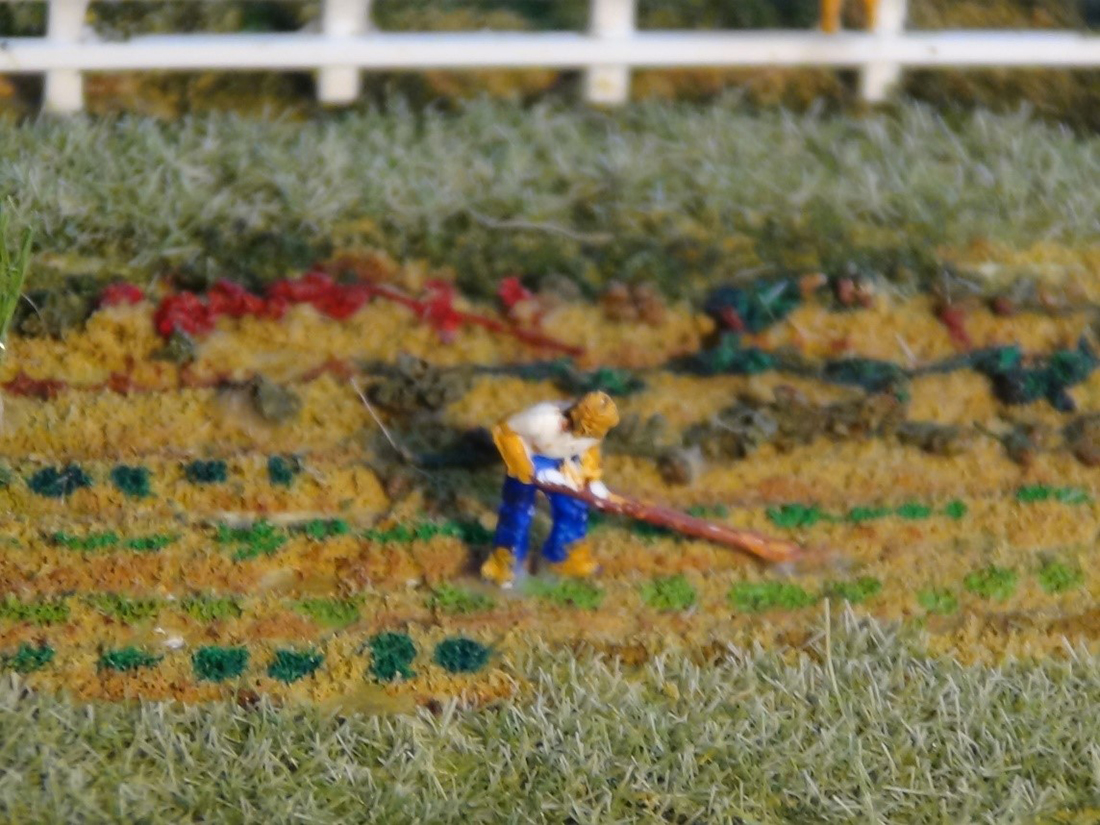 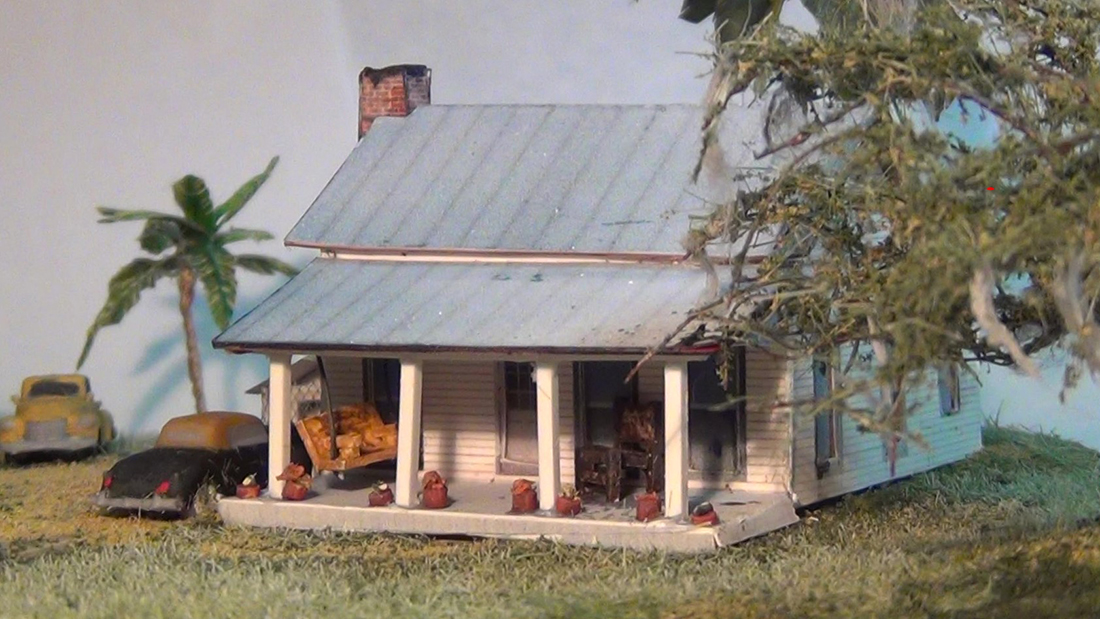 And now on to Brian from the archives:

This is the third report from Grandpa’s Wonderful Railway (N Gauge) here in Wokingham, UK.

It’s a busy day on the layout especially at the Northlew Station which is hosting a Thomas and Friends Weekend. Thomas, Annie and Clarabel are as popular as ever giving family rides, James is desperately trying to control some troublesome trucks, and Percy has been assigned to display his amazing pulling power! (All the models are Tomix)

On the middle section, a special visitor to West Hoe is the Orient Express (Kato) being pulled by the Swiss Re460 loco (Fleischmann, you may remember this one in my Poirot video). On the other line is a Class 47 loaded with Yeoman, Lafarge and Shell wagons (Graham Farish).

On the lower section, the unusual load of a British Army Warrior armoured vehicle can be seen at the front of a container train pulled by a EW&S Class 66 (Graham Farish). What’s that all about? And that’s the A4 Mallard in BR Green pulling a rake of LNER Gresley teak carriages (Minitrix – still running well despite being about 30 years old!). And, that’s a Class 170 2-car DMU London Midland (Graham Farish) at Millbay Station.

On the layout you’ll see various things of interest – James Bond ‘Licence to Kill’ (not one of the best ones) is showing at The Odeon, the goods depot at Northlew looks pretty busy, Farmer Jackson’s sheep are waiting in the cattle dock to be loaded.

Rock’s Chocs chocolate factory has had it’s delivery of milk, the allotments are busy today, that’s the Ding Dong Tin Mine pumping house heritage site that Thomas is passing.

The new house is coming along nicely with a view over the cable ski water park (scratch-built cable ski rig), always nice to see a wedding with music by an ensemble from the the groom’s mates in the Parachute Regiment Band, and traffic has come to a standstill at Wenham Farm because of a stubborn cow!!!

Music accompanying the video by the way is ‘Light at the End of the Tunnel’ from the musical Starlight Express, a family favourite.

Hope you enjoyed it?

Many thanks Al for your continued hard work and commitment to the blog – always interesting to see railway modelling at all levels.

A big thanks to Terry and Brian.