Mark’s been in touch with his 10×18 Lionel layout:

You will see a brewery that I made its from Utica, NY started in 1888 and still going strong.

I been in this hobby since my father had 027 lionel and HO Lionel as a child since I can remember.

I have over 60 Post War lionel and MTH , Williams, K-Line and MPC Lionel.

Have over 300 pieces of rolling stock and 8 Passenger Sets.

I use Tubular 027 Track and have Lionel, K-line and Gargrave switchs.

I use a few blocks to park engine and to bring on line. The best part of being a operator is having a cold beer and watching trains.. 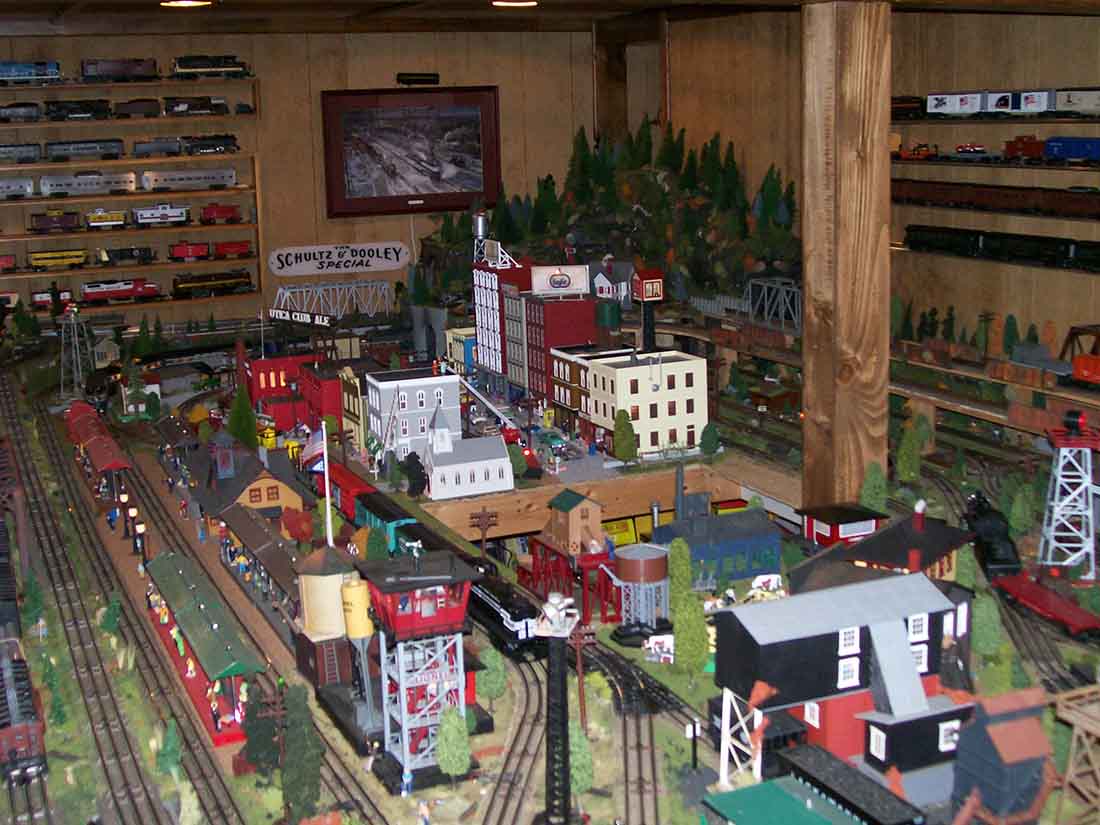 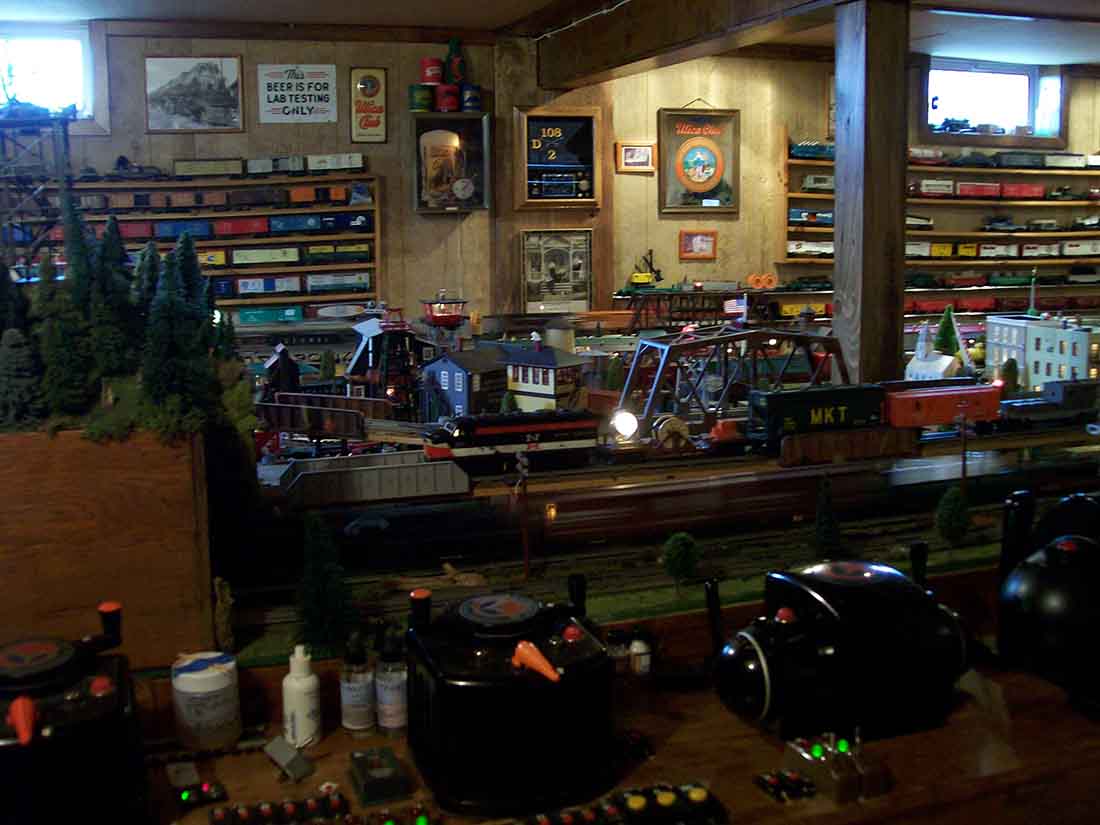 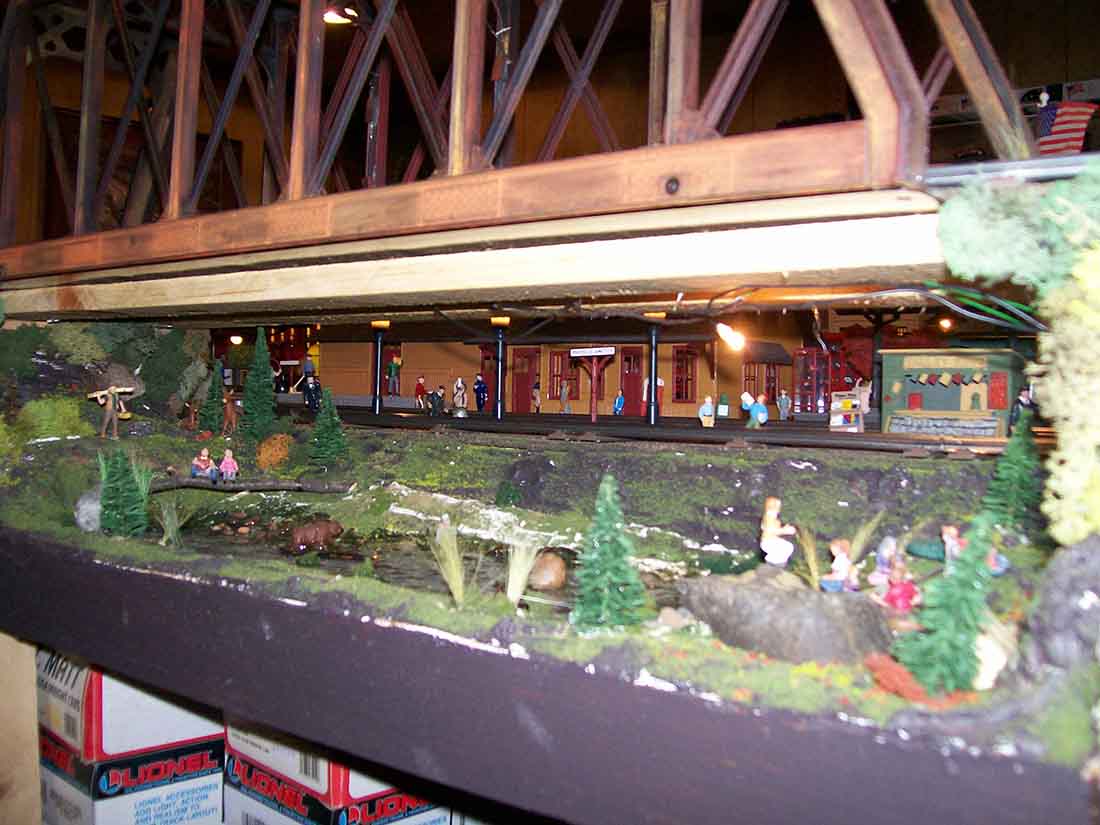 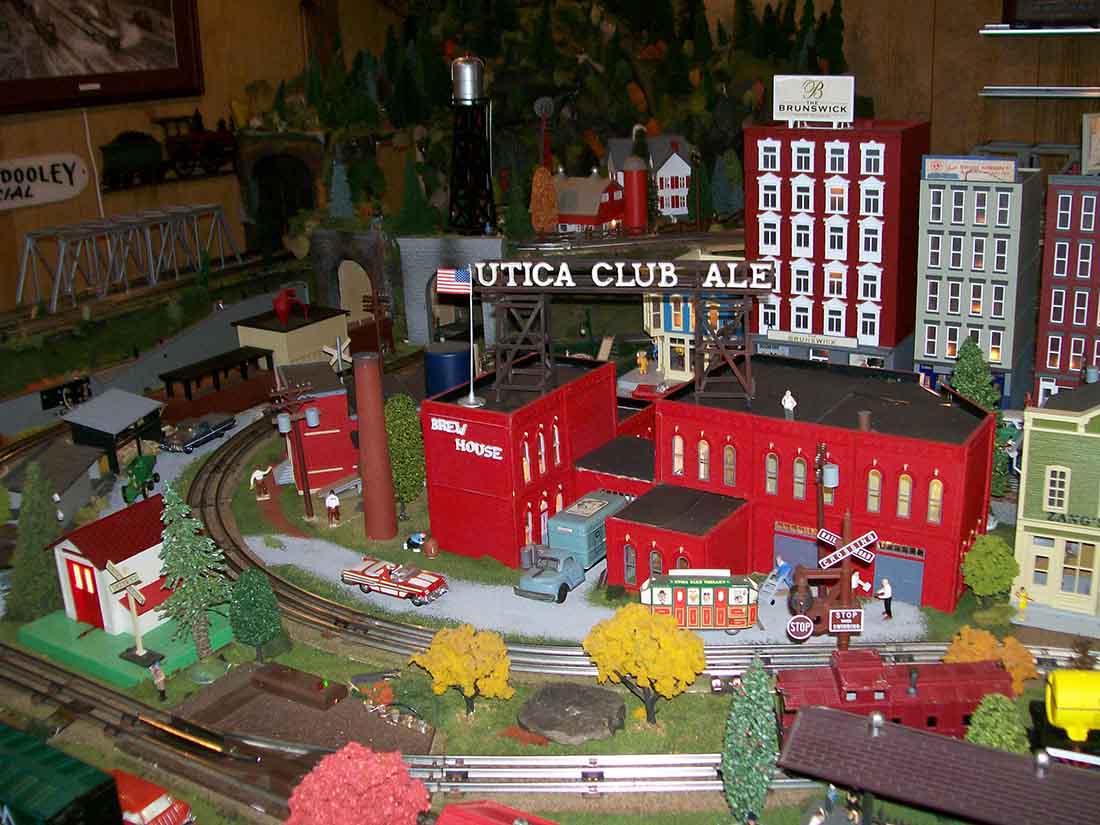 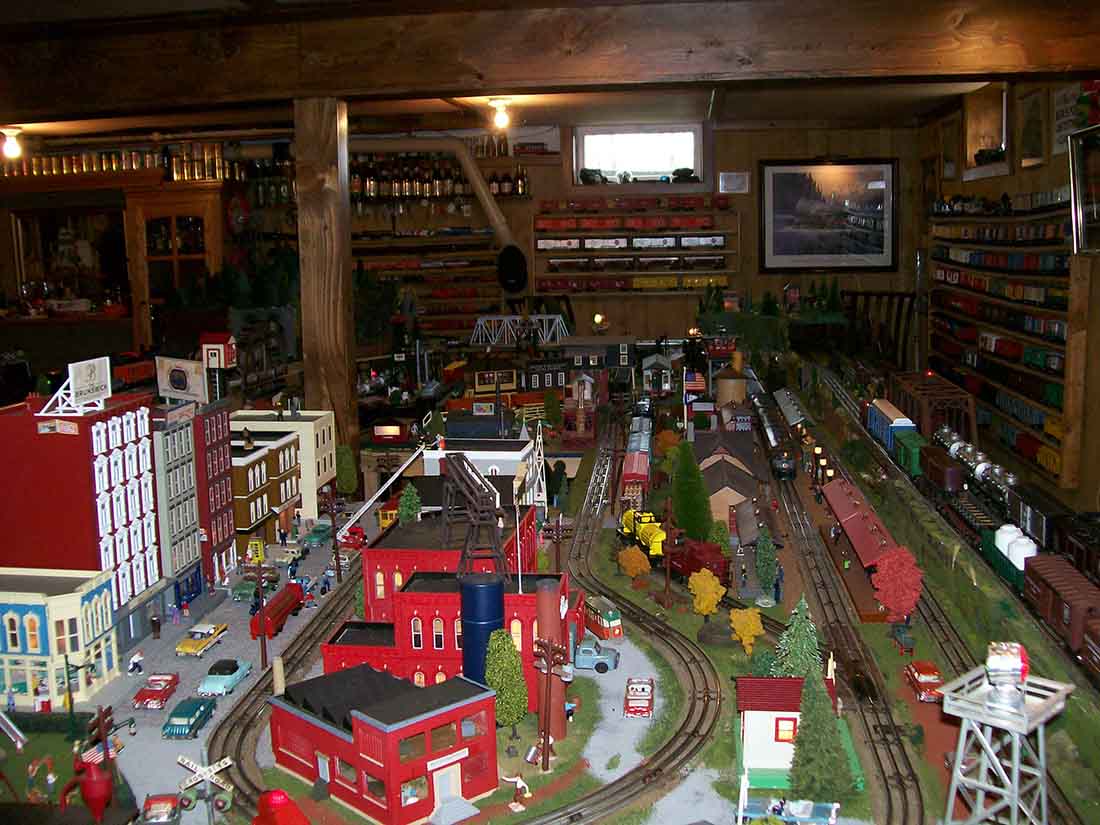 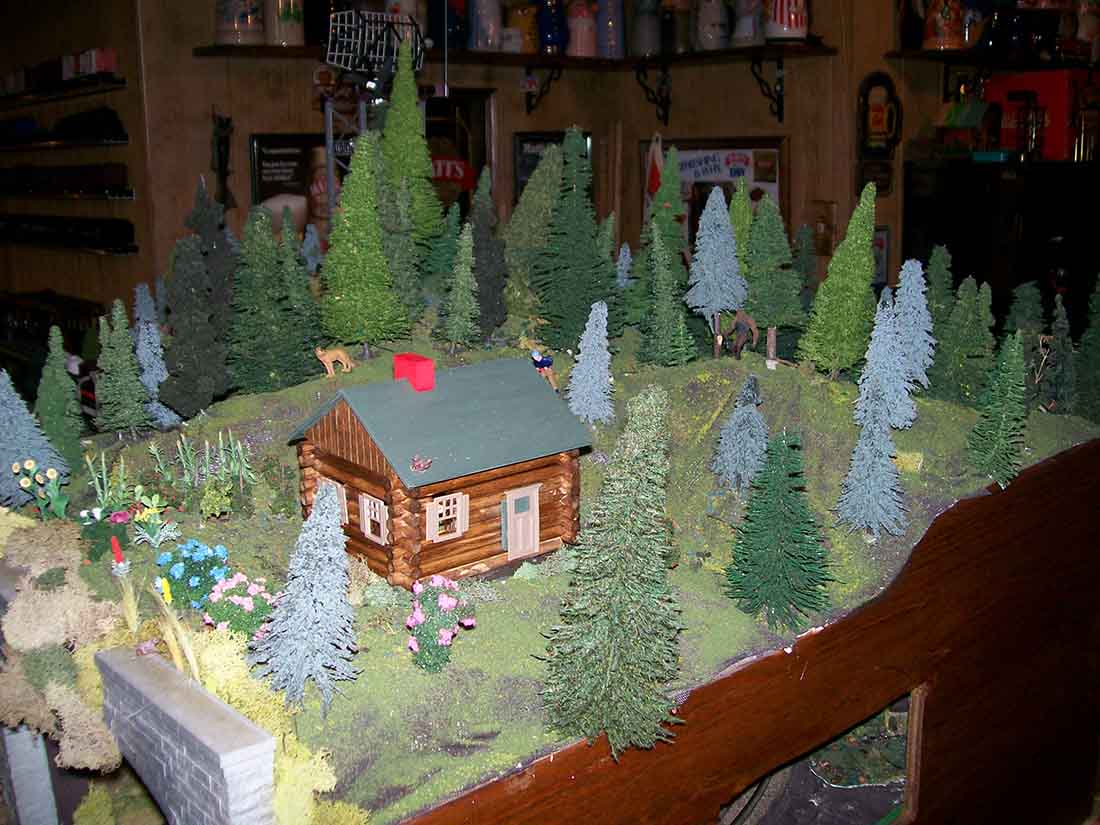 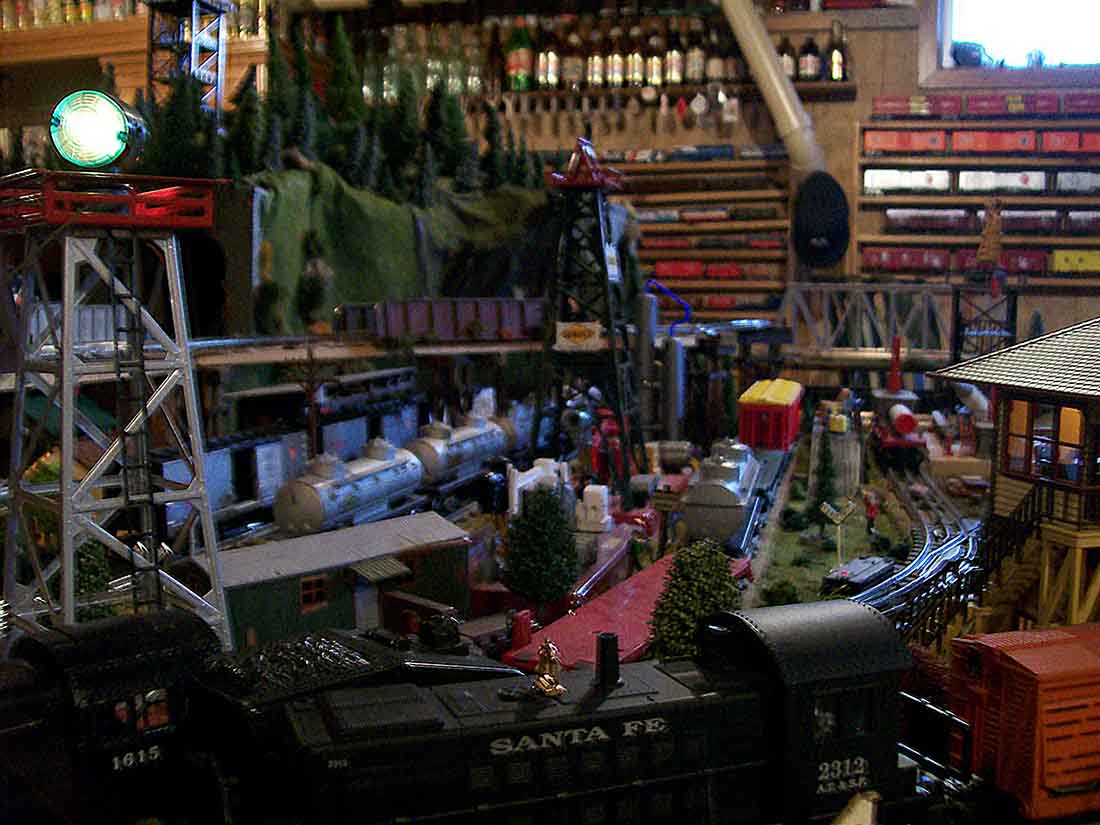 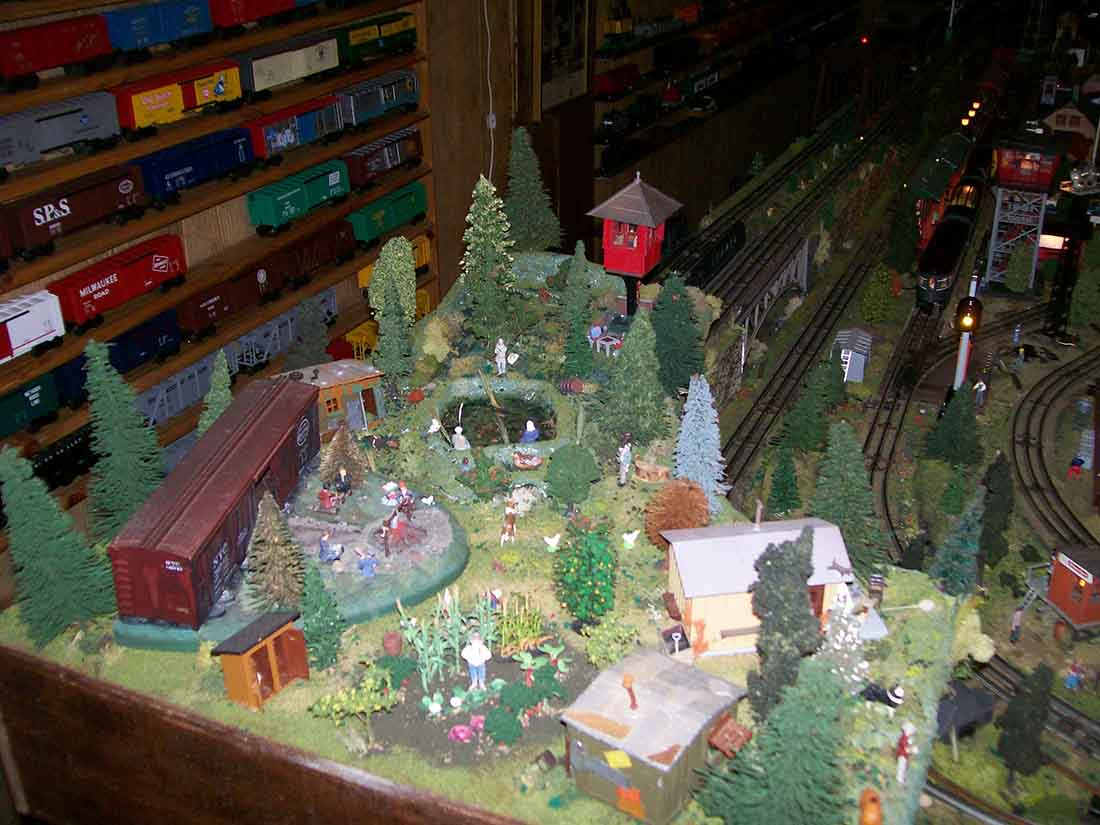 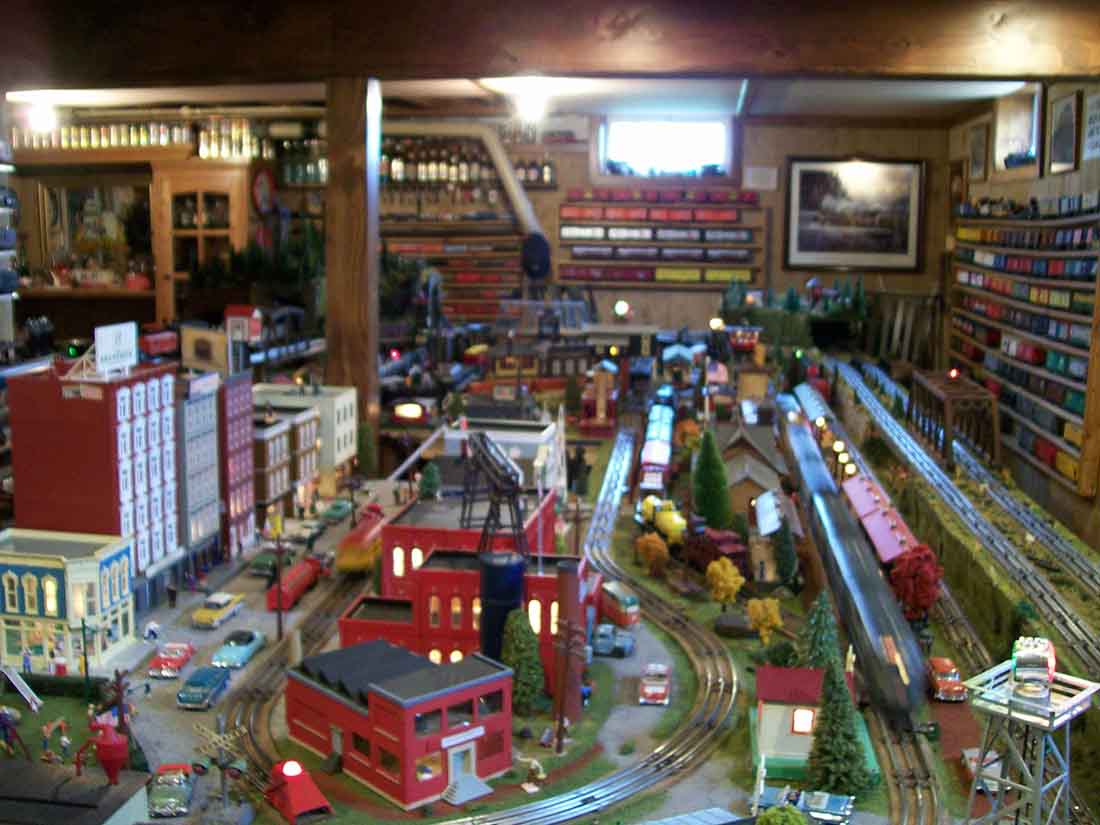 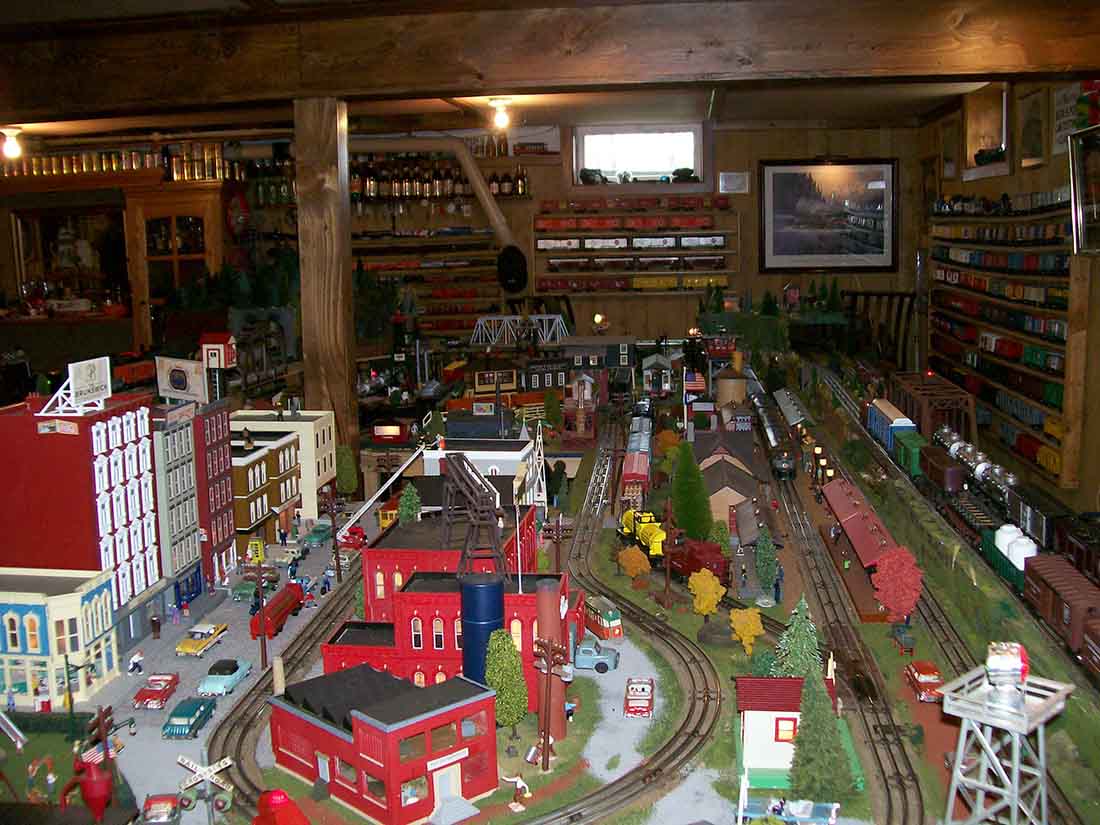 A big thanks to Mark.

Now onto something a little bit different.

I didn’t whether to post the below or not because it’s slightly off topic – but then I remembered who was Bob was.

You’ll remember him from this N scale layout. 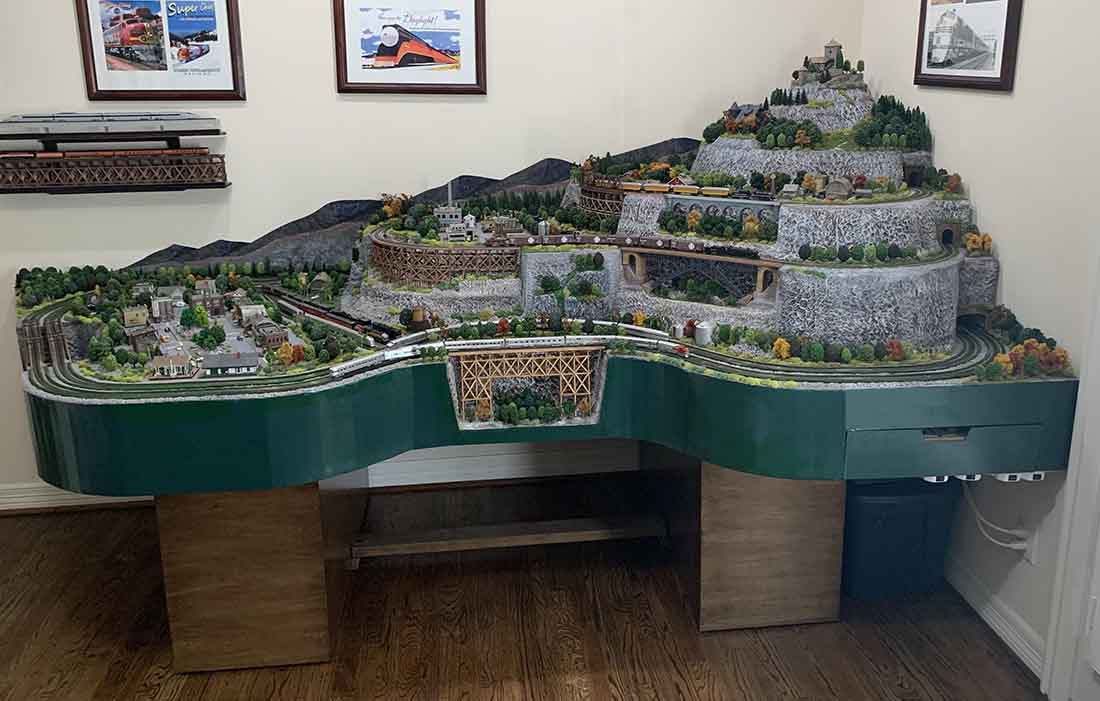 Well, once I’d connected the dots, I was happy to post:

“Al…I hope all is well with you.

Here is a new post that is a little different but I hope everyone enjoys it.

We model railroad hobbyists love to share our passion. We display our layouts in museums, exhibit them at model railroad shows, and participate in blogs like yours.

Once in a while, a less conventional way to share our love of this amazing hobby presents itself. I have recently had such an opportunity.

My daughter is the artistic director of a theater program for young adults and adults with a variety of physical and developmental disabilities.

Each year, her clients write and perform in an original musical play. A recurring theme of these musicals is how the actors are often stereotyped by their disabilities and how they are able to overcome these stereotypes.

For the past several years, it has been my privilege to design and build the sets and props for these plays.

This year, the setting for the story was an abandoned amusement park that the actors wanted to restore to its former glory.

One of the main props needed was a kiddie amusement park train. Their director likes models of the sets and props because it helps her visualize how they will appear on stage.

So I make simple models of everything. She did not like the original design for the locomotive because it looked too real. 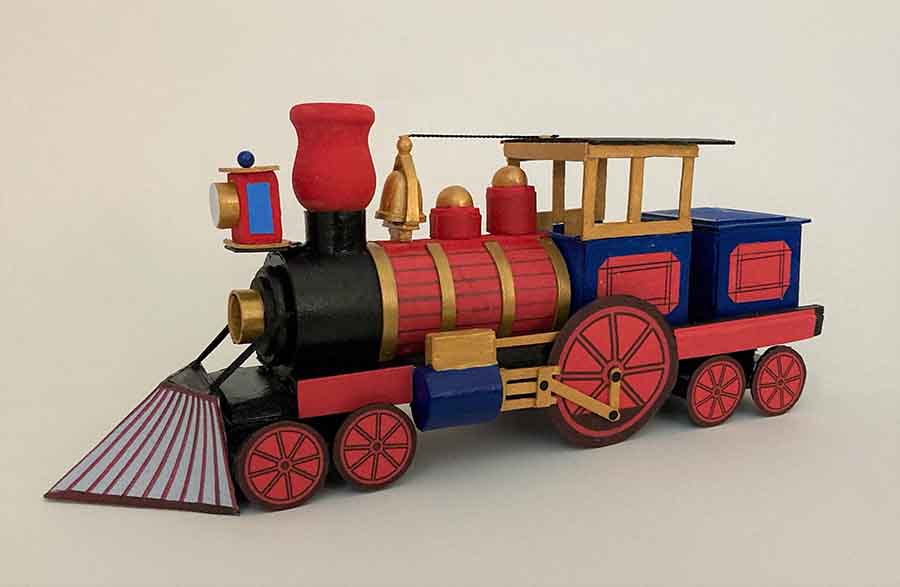 She wanted something that looked more like a kiddie amusement park locomotive. So…back to the drawing board.

The new design met with her approval. She originally wanted a locomotive and two cars; however, because of limited space on the stage, I only constructed the full-scale locomotive. 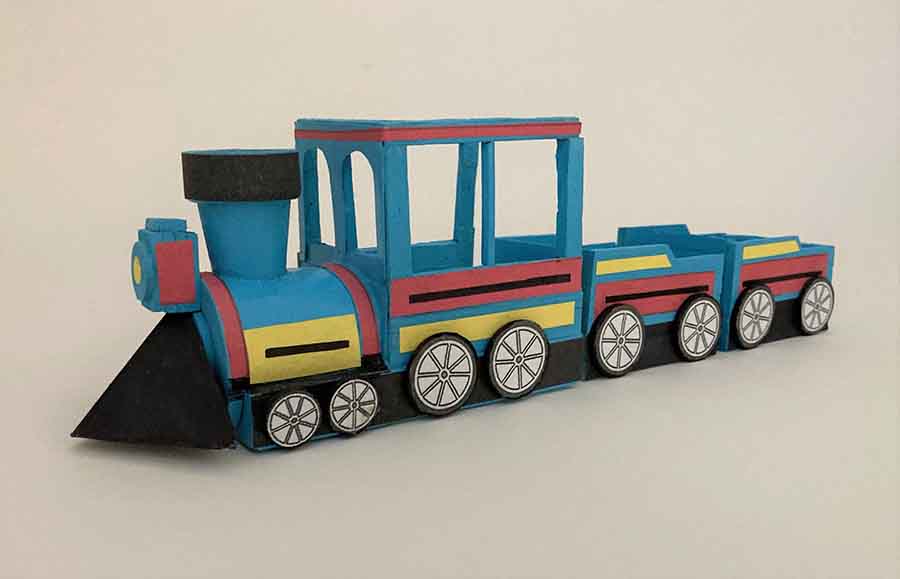 The locomotive had to move under its own power so I fabricated a wooden framework over an electric powered kids ride-on jeep . 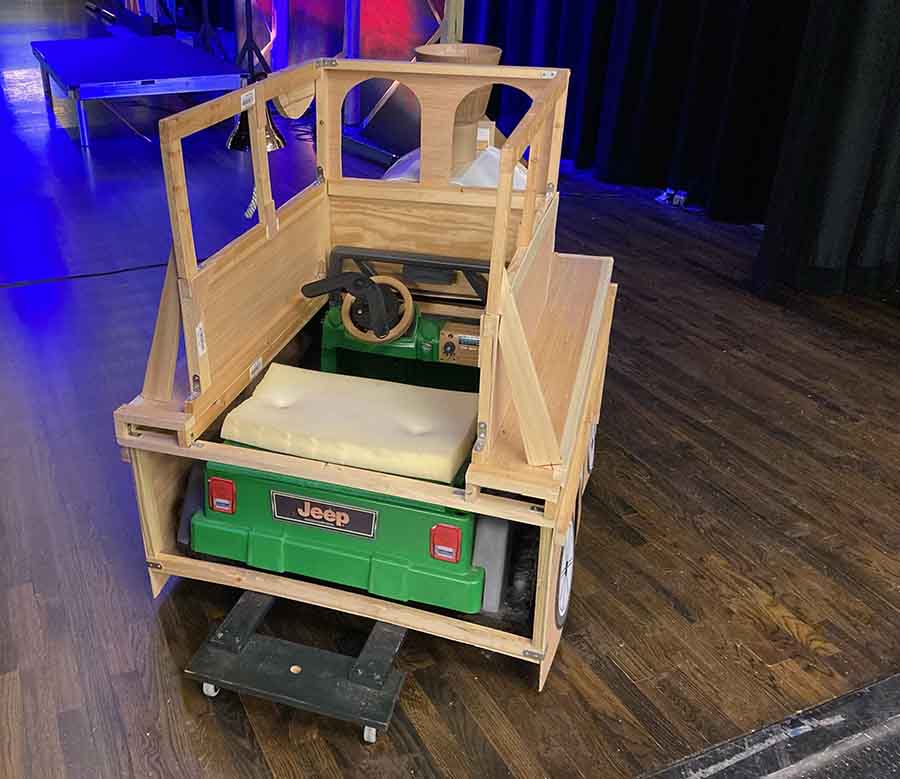 The locomotive body consisted of plywood panels attached to the framework. 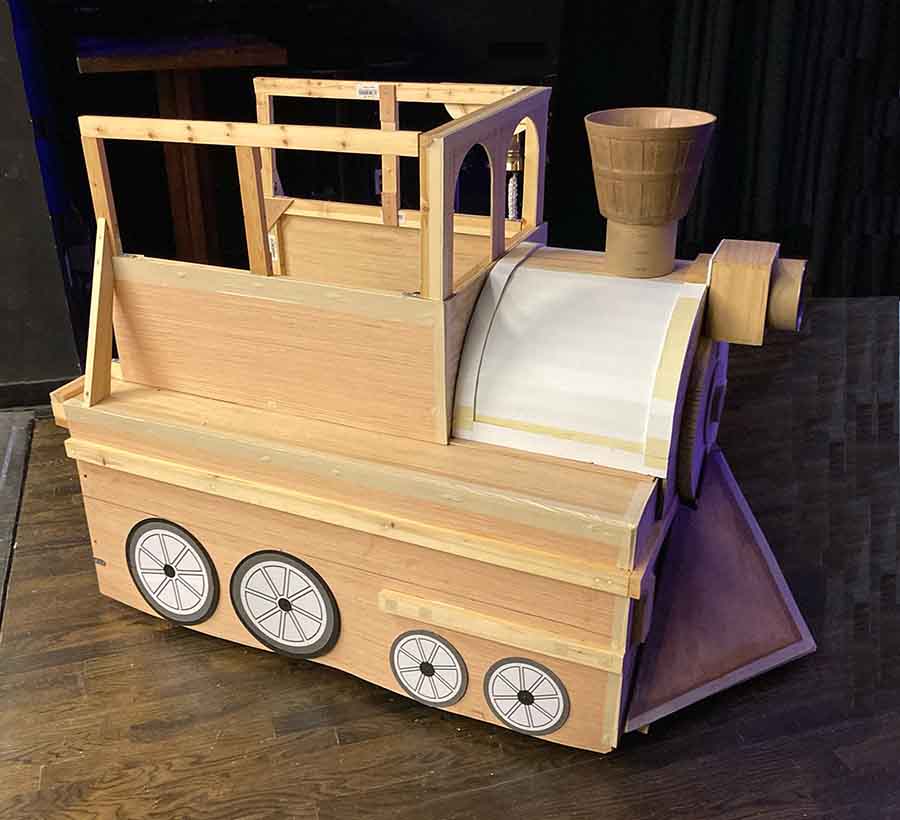 The boiler was foamboard and the original smoke stack was a plastic flower pot. The mechanical components typical of a steam locomotive are absent but that is what the director wanted. 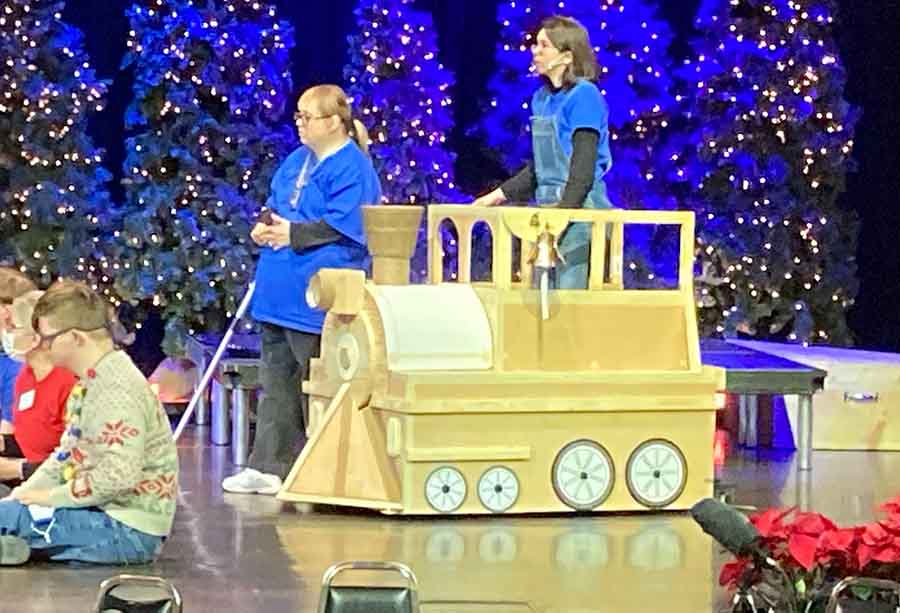 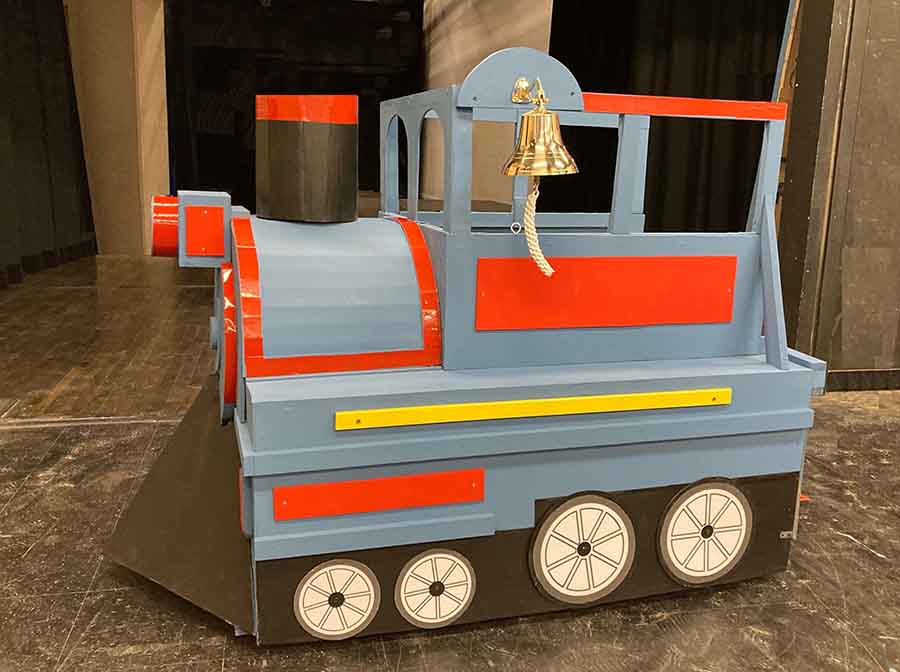 Just before the initial performance, she decided that the locomotive looked entirely too new. After all, it was supposed to be in an abandoned amusement park.

So we did a little last minute weathering. 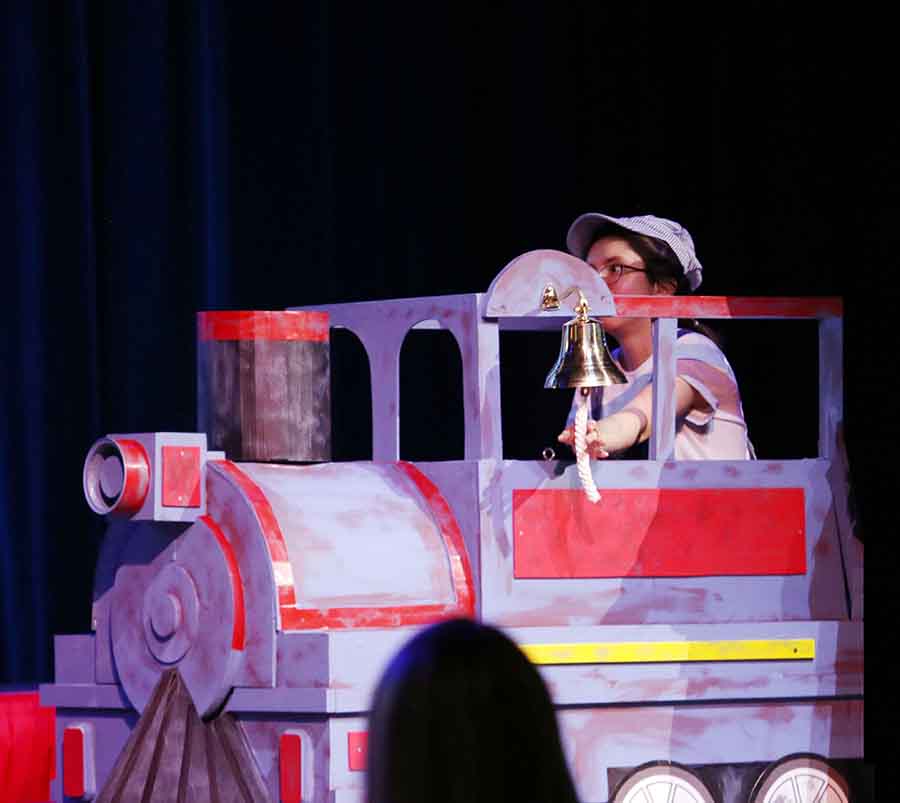 The locomotive’s appearance on stage was greeted with great fanfare. 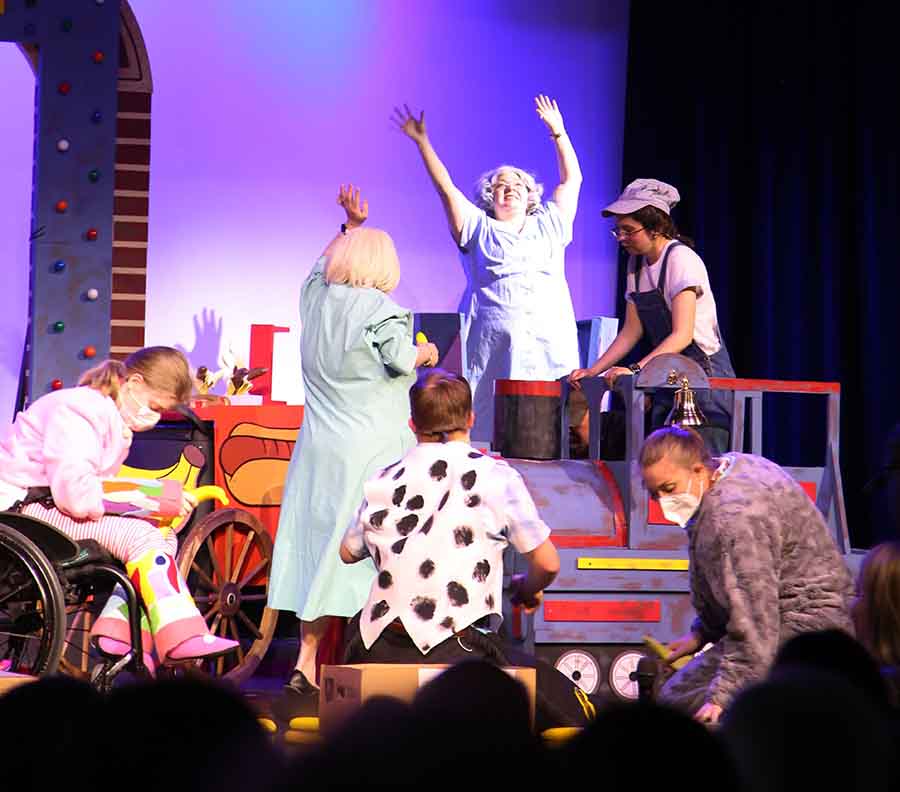 The most challenging part of the build was fabricating a mechanism for blowing a large puff of smoke from the smokestack (now a simple cylinder). The “smoke effect” mechanism consisted of a canister of compressed air and a plastic cup filled with baby power.

I put the mechanism inside the smokestack and a quick pull on the canister trigger released a large plume of baby powder smoke (sorry for the poor quality of the photo…it is a screenshot captured from a video). 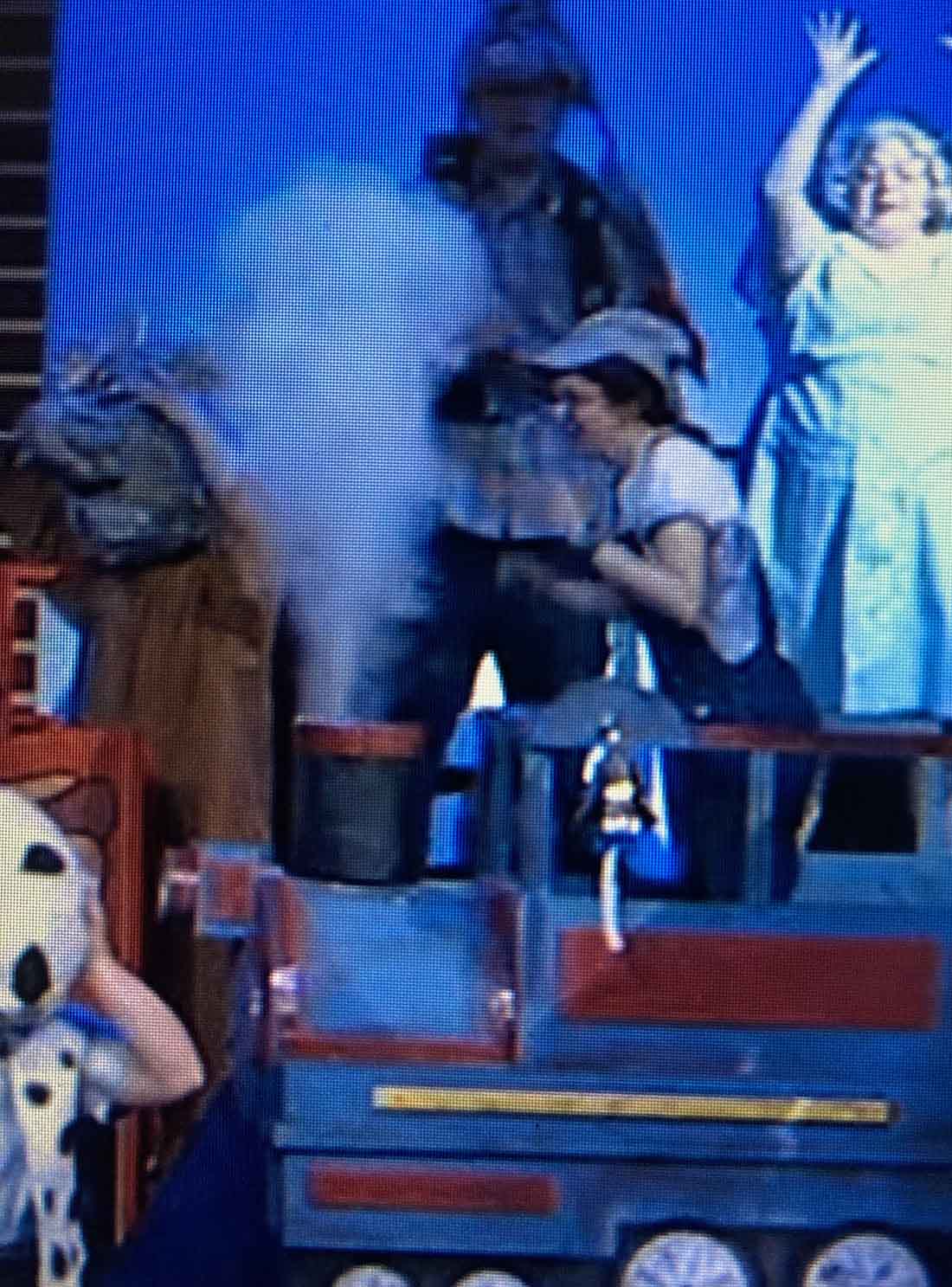 The actors, especially the young lad who played the engineer and the audience members loved the smoke. At the end of each performance, children from the audience could have their picture taken sitting in the locomotive. 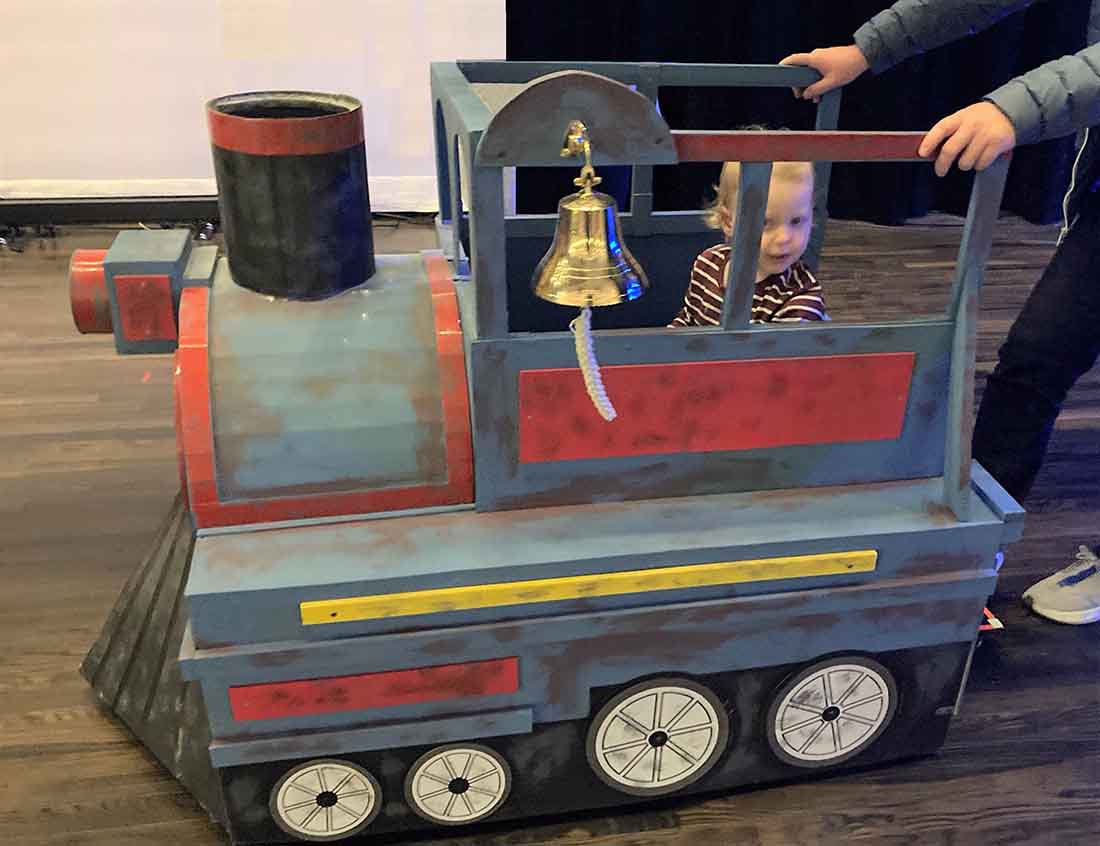 And…it introduced model railroading to a whole new audience. Thank you for letting me share this with you.

That’s all for today folks – please do keep ’em coming because I am emjoy them as much as you.