Scott’s been in touch with his 4×8 N scale train layout.

I’ve got round to sending in some pics of that track plan come to life.

Already seen that you’ve posted the track plan layout, that elicited a comment about ‘cluttered-with-track’ layouts. Well, that’s fine, and doubtless many will cringe at my ‘clutter’, but I don’t care, I just want to have fun running trains!

My interest in trains probably started when my dad would take me for train rides on Chicago’s Elevated, which spun around the city’s Loop.

I was just a young lad, and was google-eyed most of the time, taking in all the advertisements inside the train car.

Later, after the family moved to the suburb of Arlington Heights, I would ride the Chicago and North Western commuter train (which I’ve got a replica of on my layout) into the city to meet my dad for lunch in the city.

Still later, when I went off to college in Norman, Oklahoma (I was a meteorology major at the time), and I had almost door to door rail transportation to get there from our house.

It was less than a mile walk to the North Western train station in Arlington Heights, I rode into Chicago, walked a block and a half to the Union Station and got on Santa Fe’s Texas Chief, to Norman. That line ran from Chicago to Houston, Texas, with a stop in Norman along the way. Another mile walk to the college dorm.

I started my first layout when I was in high school back in the early 70’s, N-scale, on a 4×8 table my dad helped me build.

After my wife and I retired from our respective careers in Tucson, Arizona, where we met, mine in television engineering and hers hospital IT, we bought a place in the Finger Lakes region of Upstate New York.

My wife is originally from the Utica area, and her sister lives in the little village of Dundee, where our summer place is. I have been working during the summers on the layout in the basement, and added the second 4×8 table to form an L-shaped arrangement.

The pictures show the result of many trials and errors, and when I found SCARM I rejoiced, because my first efforts were done without a plan, and getting track runs to match up properly was quite the headache.

One feature of SCARM that really proved valuable was its Model Trains Simulator, which one can use to determine the needed length of a reversing loop to accommodate lengthy illuminated passenger trains, like my C&NW.

I use NCE’s Power Cab with a radio built in so I can work wireless.

I have used the old Atlas switches to control the turnouts, which are a mixture of Atlas and Peco.

The Peco turnouts have under table PL-1000 twin coil motors which work quite well.

I avoid coil burnouts with the use of a Snapper capacitive discharge unit. I found that in order to throw over more than two machines at a time, I needed a higher voltage to provide enough of a punch to do so. I use Atlas Snap relays to provide LED status for each switch, some of them being tandem arrangements, so I went with a cheap 24v AC wall wart irrigation transformer.

The bridge spans I cut from 1/8″ basswood, which is the perfect thickness for cork roadbed to match up to.

One aside is that after I built the fiddle yard, I was amazed that a real-life example exists in southwestern Evanston, Illinois, CTA’s (Chicago Transit Authority) Howard Yard.

As can be seen, I’ve just recently finished laying the track and am still working on little niggly issues with some of my more temperamental locos.

I thinks I’ve ironed out most of them, and will soon start with landscaping, and adding buildings, etc. Keep in mind that my main objective was to run at least five trains simultaneously, and I wanted a challenge to do that! 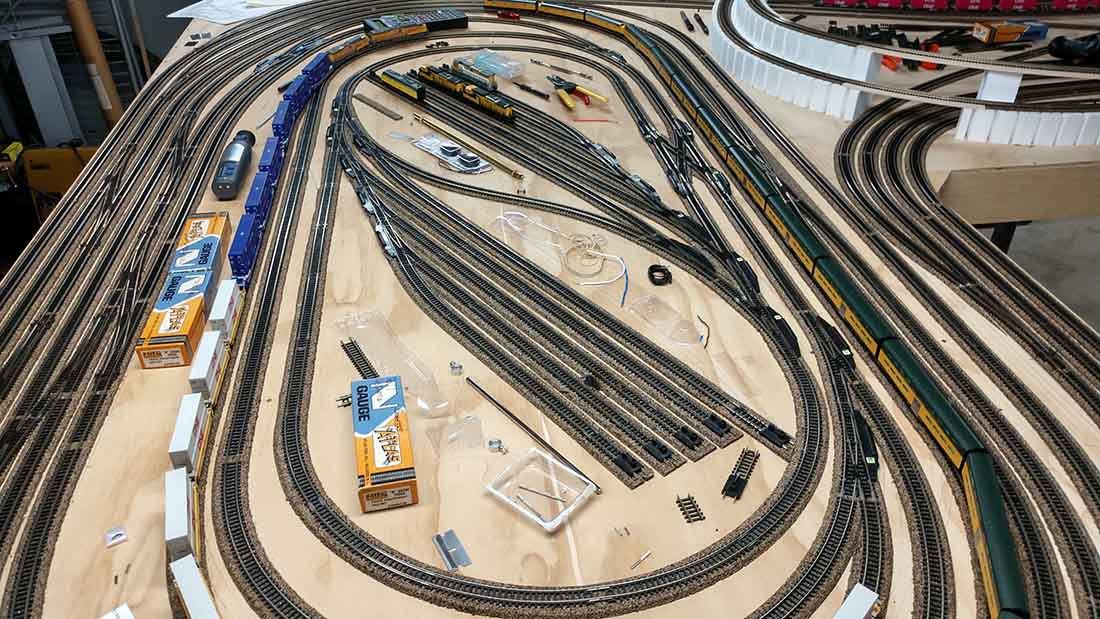 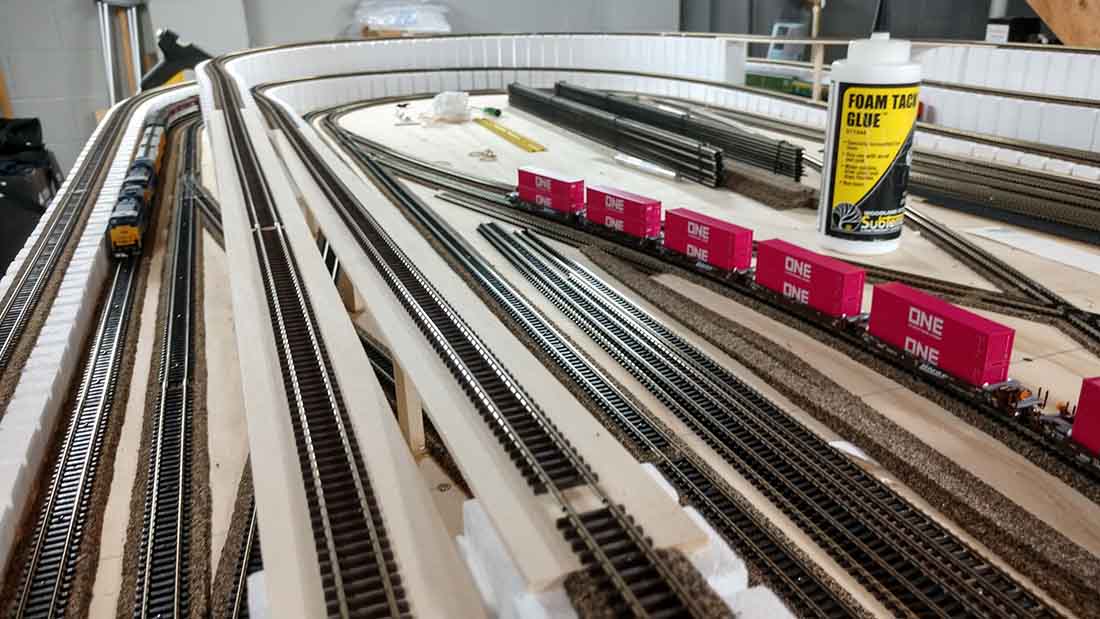 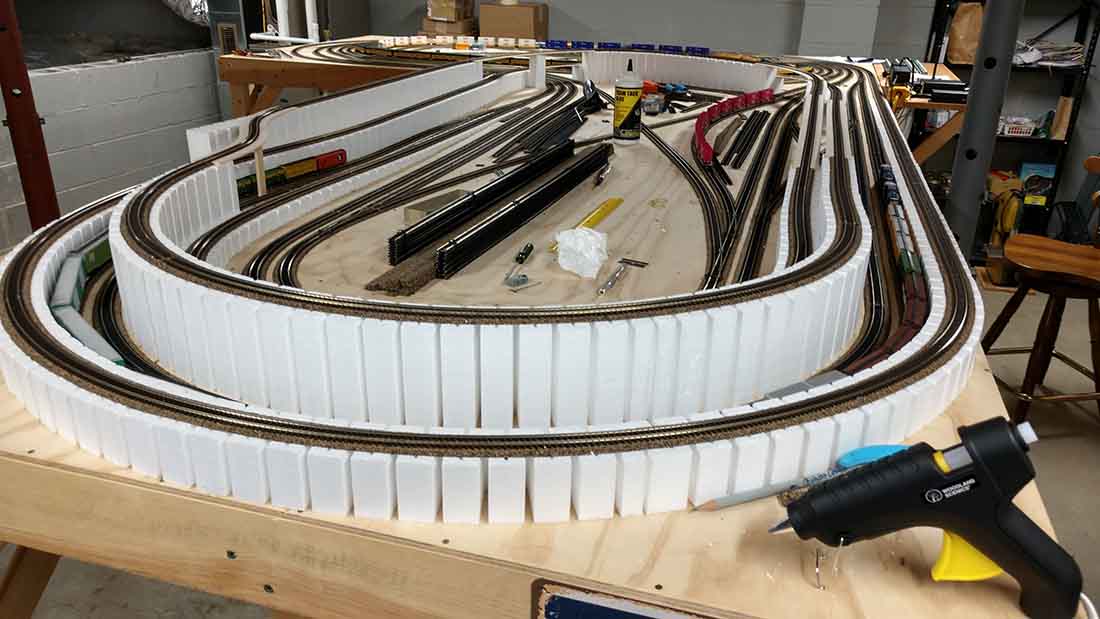 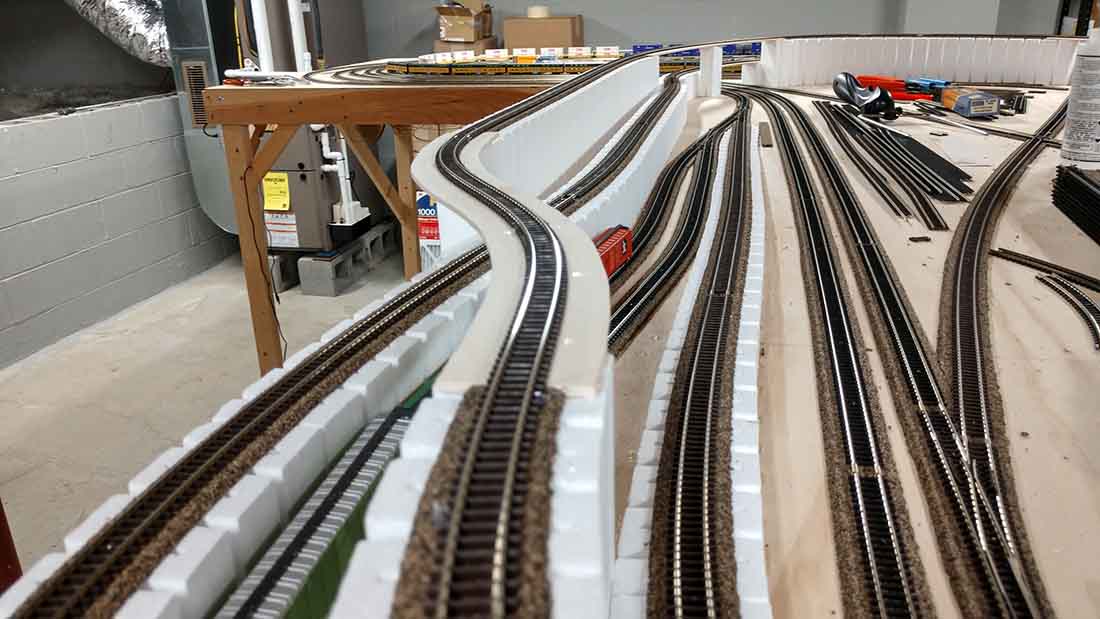 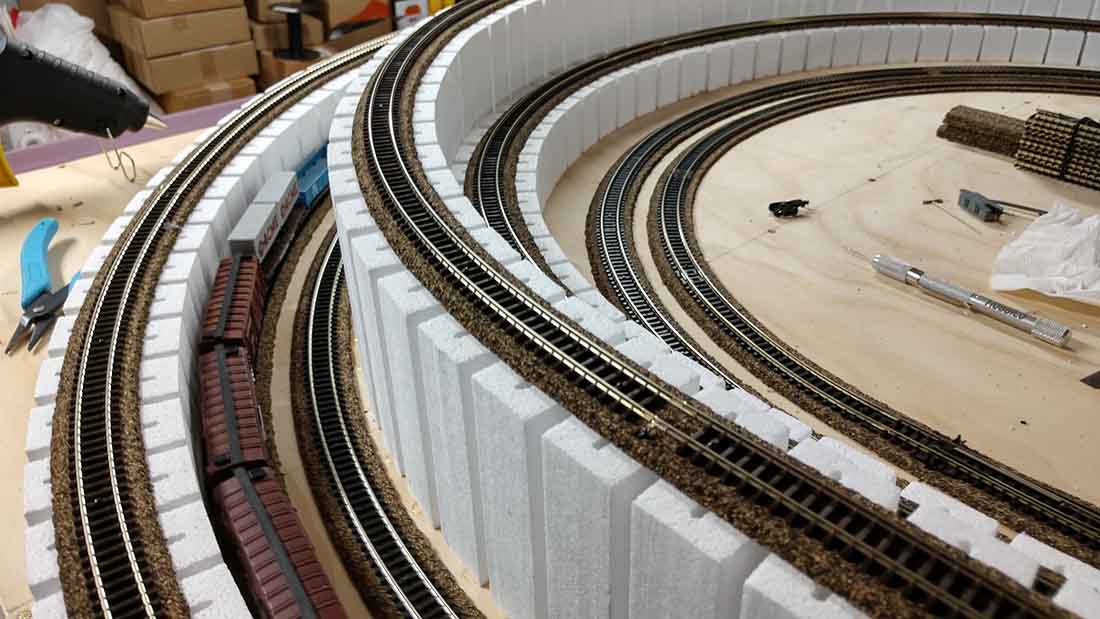 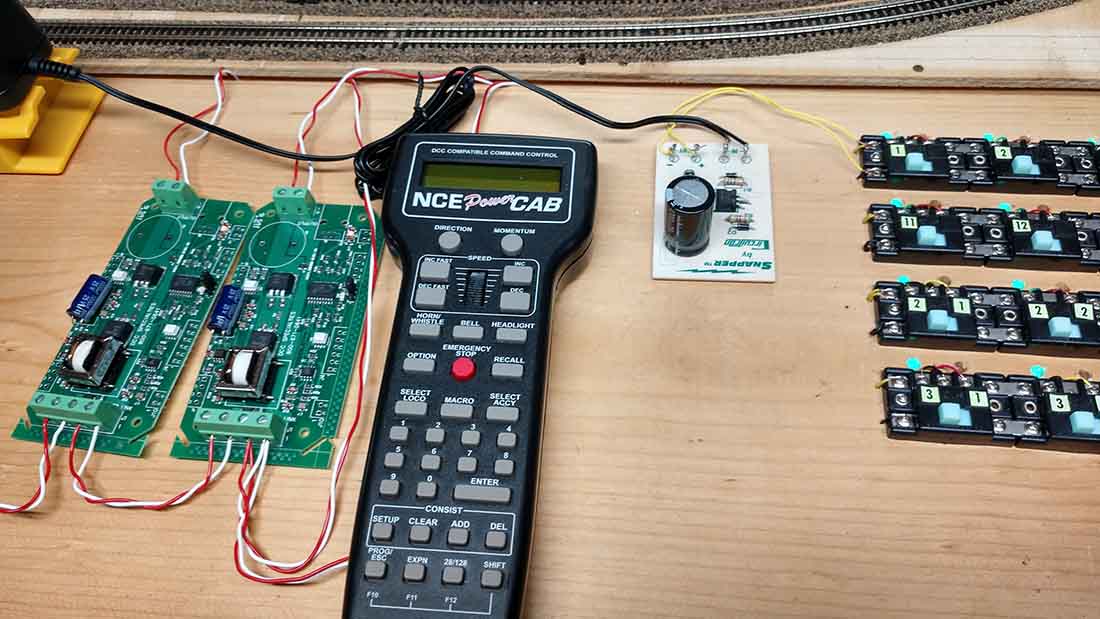 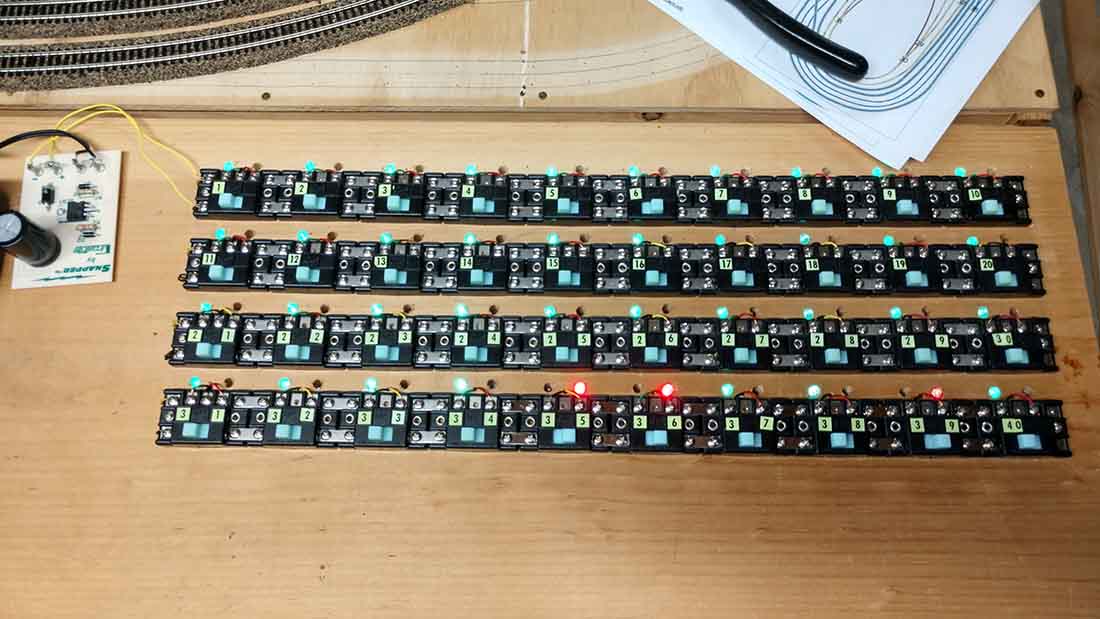 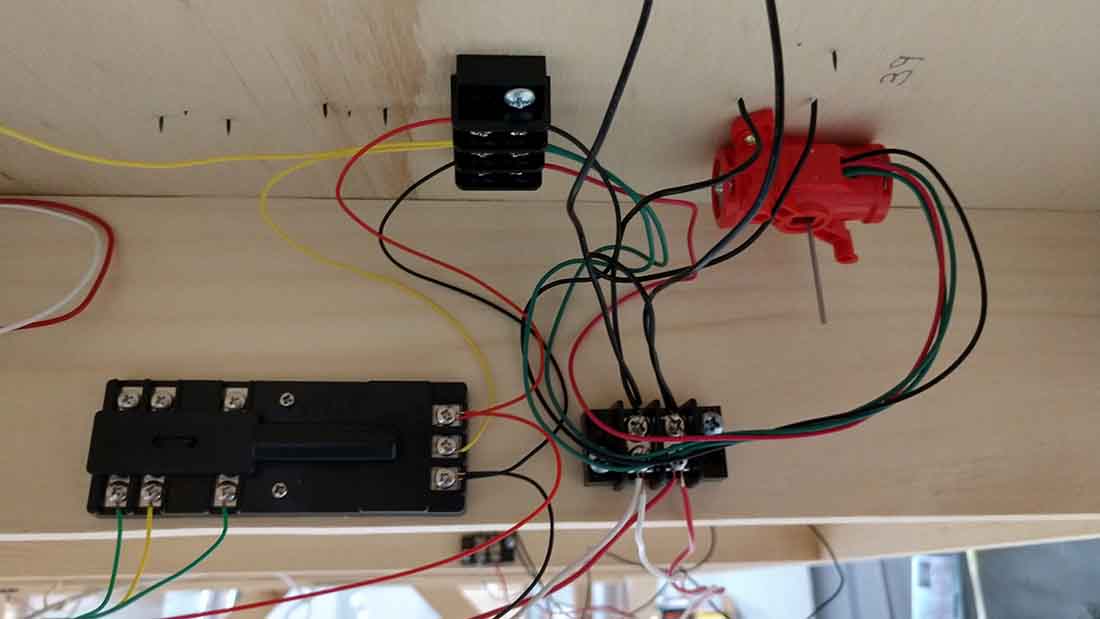 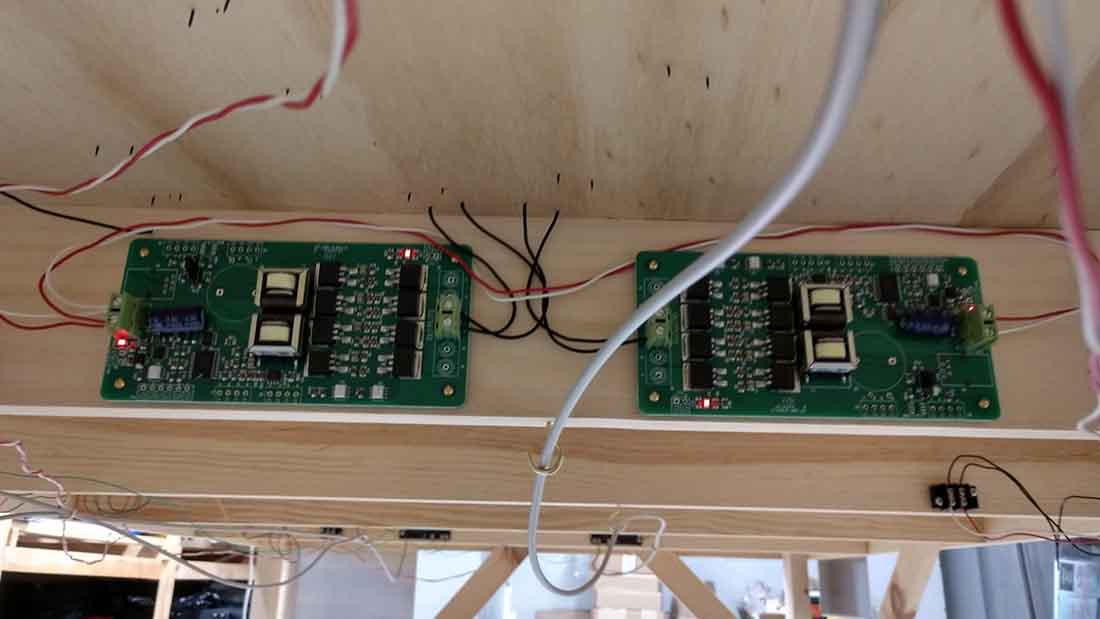 A big thanks to Scott for sharing his 4×8 N scale train layout – I’m really looking forward to seeing this one evolve.

When I see a N scale with multiple levels, I always think of Bob’s N scale layout.

And if today is the day you jump out of your chair, roll you sleeves up and get busy on your layout, the Beginner’s Guide is here.