There’s quite a few S scale model train layouts on the blog.

Cecil has sent in his – have a look at what he’s done:

“Al. I’ve been a reader of your blog for several years and always enjoy the great ideas and suggestions submitted by your readers.

Some of these ideas have been included in my layout.

I’ve also included several of your houses and a church on the layout, which you will recognize from the photos.

Thanks for all you do to help promote model railroading as a hobby.

My layout is about 13 feet by 27 feet with room to walk around the layout. The plan was to get as many operating tracks as possible and I ended up with six operating tracks and another operating siding leading to factories along the river.

I’ve included photos during construction, which started in October.

Below shows completed tables in the back, part of which came from an earlier layout in our prior house.

A walkway was designed into the tables so I could get to the interior of the layout. This was later covered with removable foam pieces and a bridge. 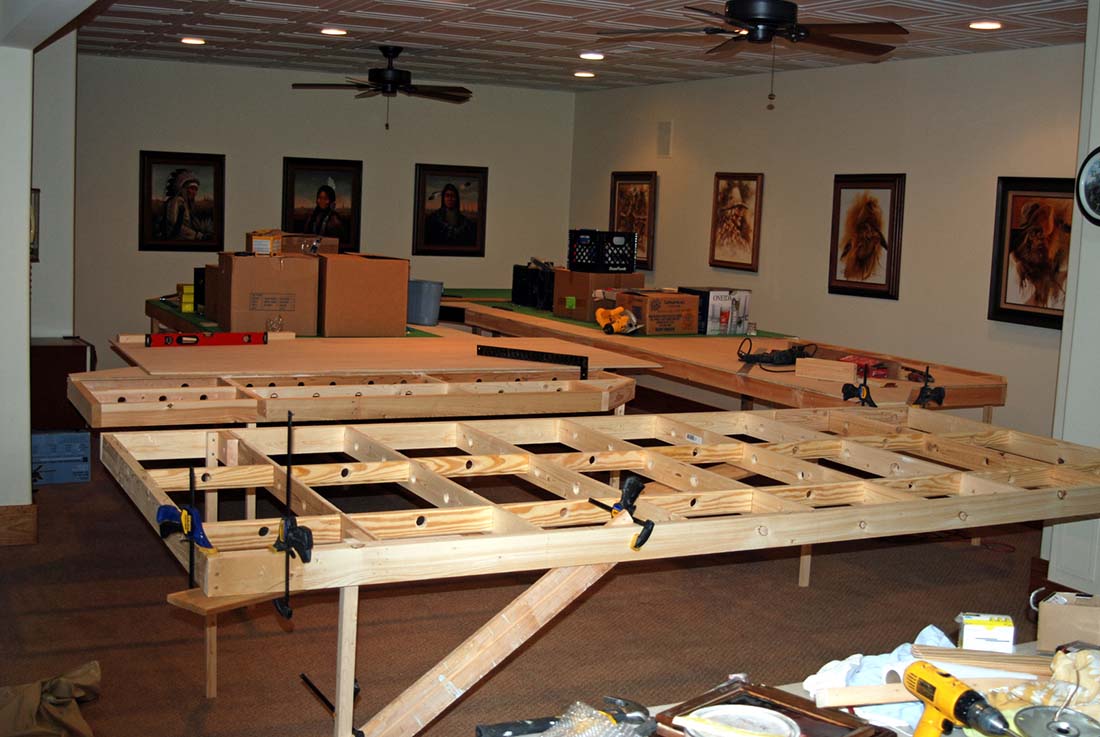 The top is ½” cabinet grade plywood, which was selected because it was straight as opposed to cheaper grades that are warped when you buy them. 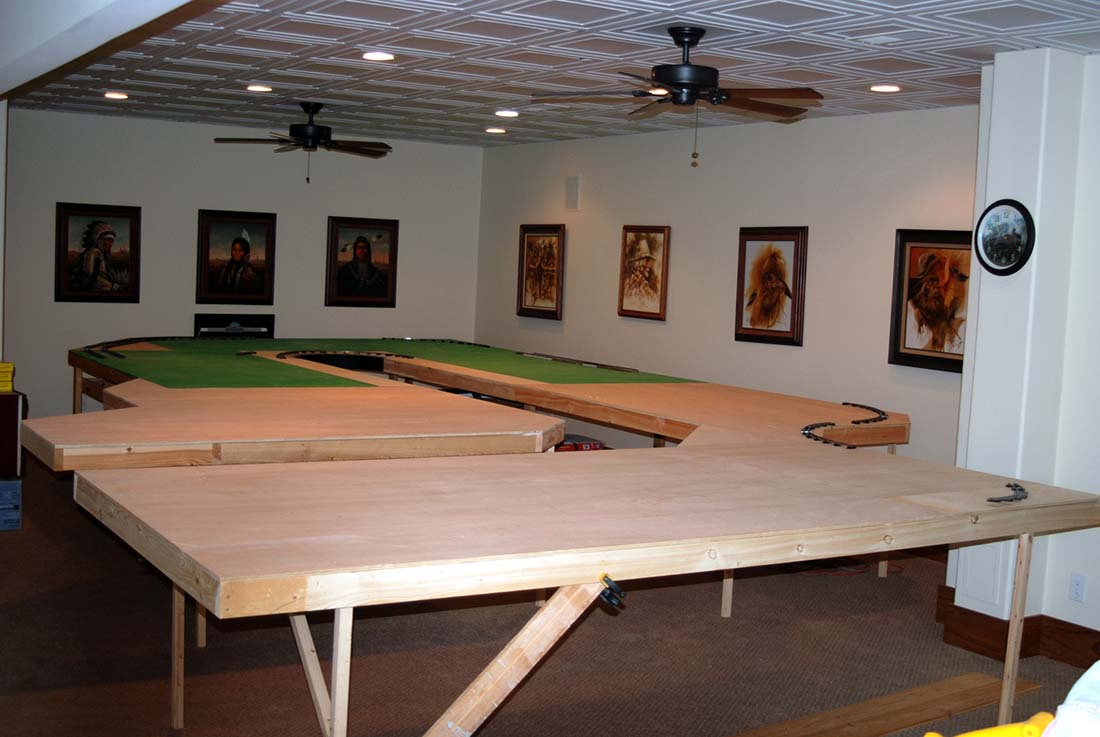 The layout as it sits today. 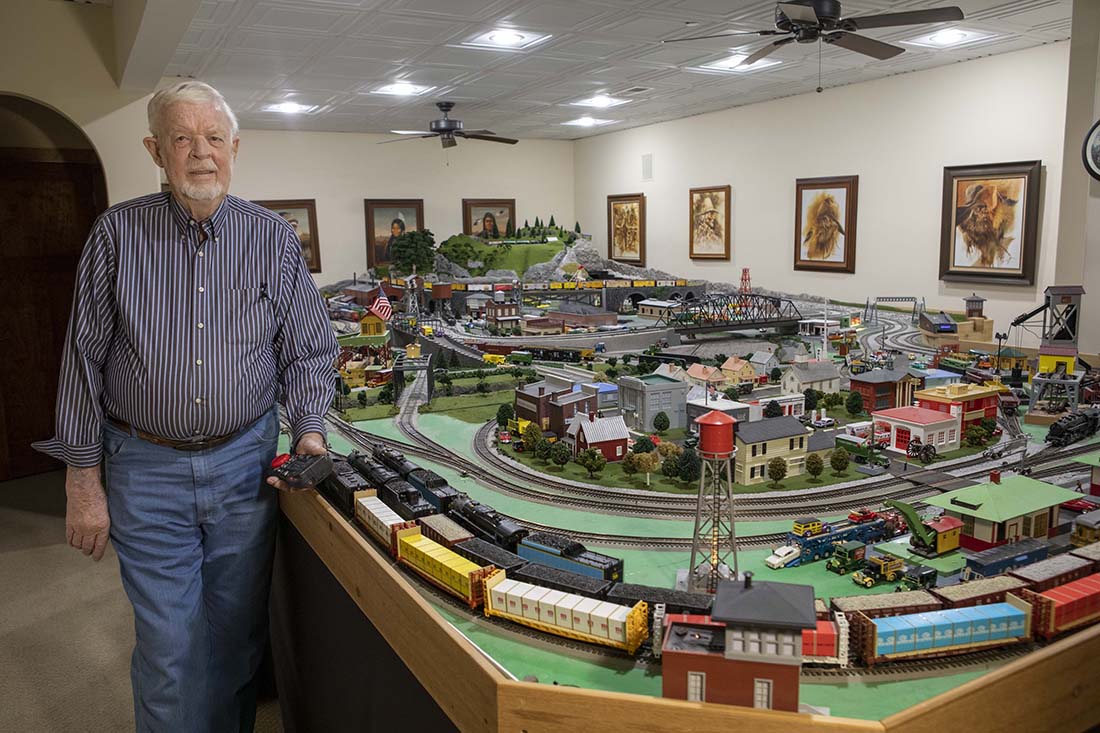 The tracks are numbered from the outside in, with tracks one and two going around the outside of the layout and under the mountain at the far end.

These two tracks enter the mountain on the outside and exit on an elevated section before crossing the river on a long-span custom-made bridge.

The bridge is one of four on the layout that were scratch built based on photos of bridges on the Pennsylvania railroad. 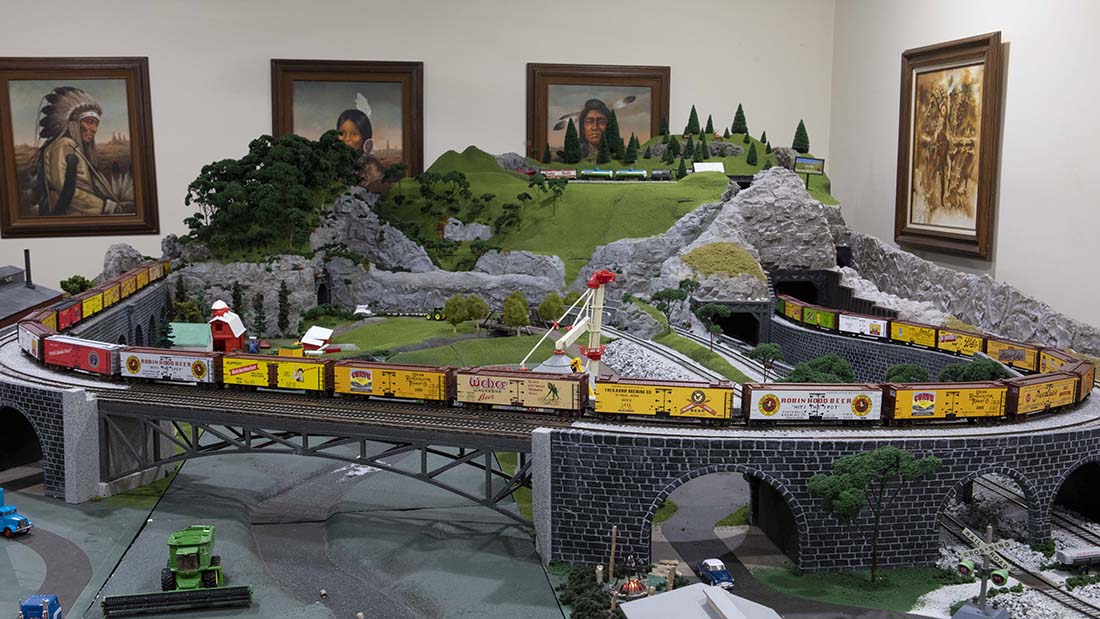 The layout is still a work in progress since there is landscaping and other work to be done around the town.

There are signal lights to be installed around the town that will require sensors to be embedded in the track with additional wiring to be completed. That is why there is no grass, landscaping, or ballast on the tracks between the river and the front of the layout.

The layout has several American Flyer accessories that are set up so they can be controlled by push buttons on the side of the layout as well as from the hand-held remote control. 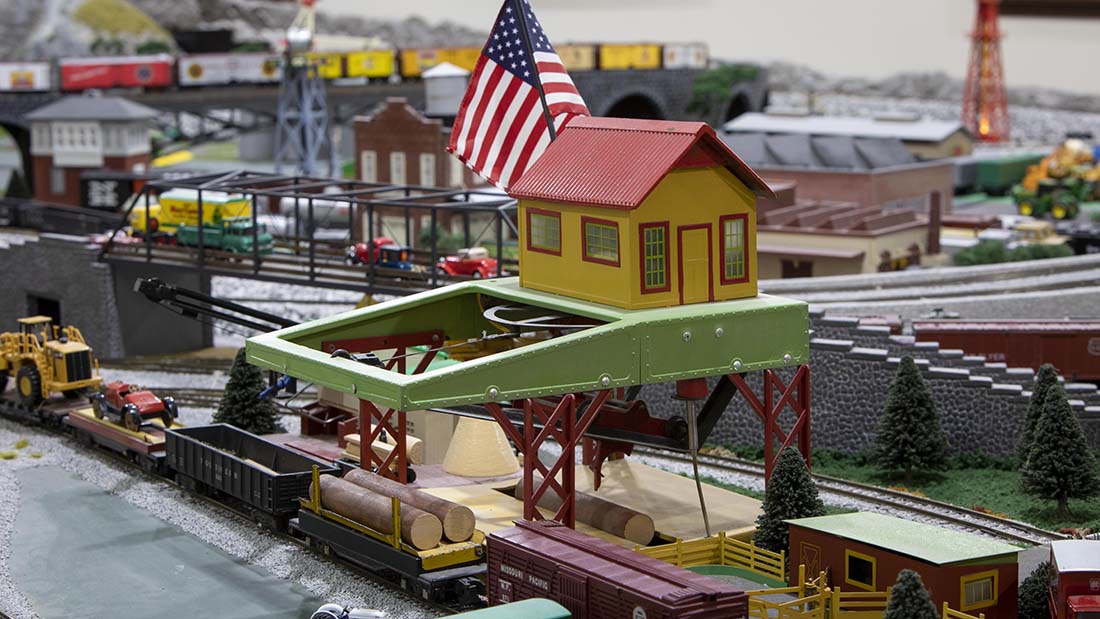 The power center is located under the front edge of the layout on a slide-out shelf. Three dual-channel transformers power the six operating tracks.

Transformer outputs are connected to Lionel Track Power Controllers located at the front of the shelf, one for each track. These provide power to the tracks and are controlled by a Lionel Legacy control system through a hand-held controller. The controller can operate any of the engines, any of the 57 turnouts or any of the accessories on the layout. 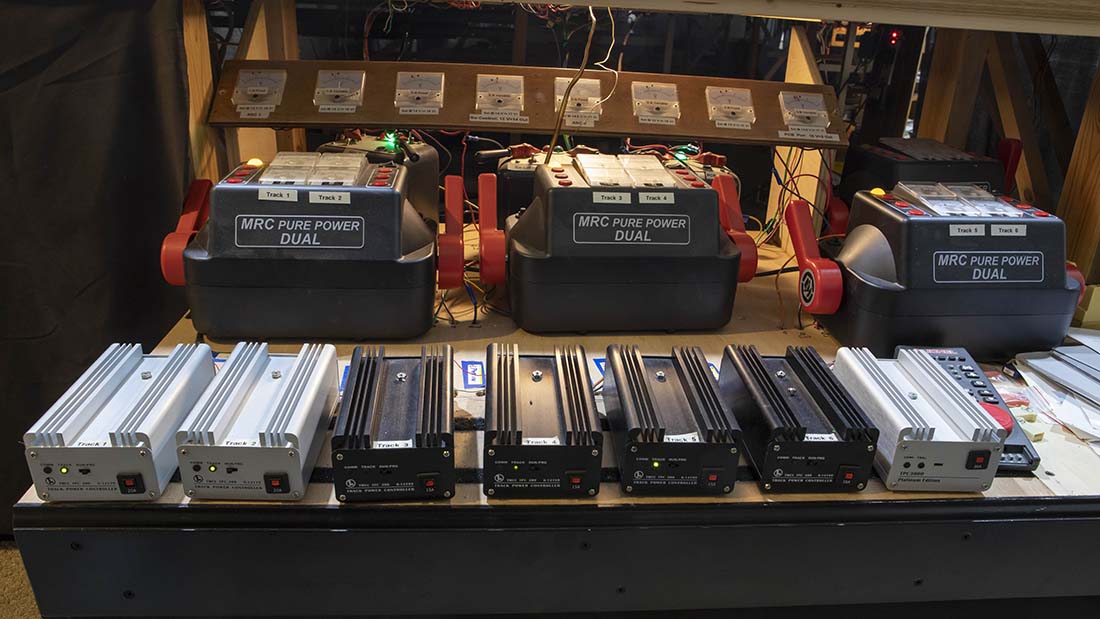 In front of the depots are three tracks. The center is track one, and other two are sidings. An American Flyer Y3 engine passes by the passenger cars waiting at the depot and bulkhead flatcars sitting on the other siding. 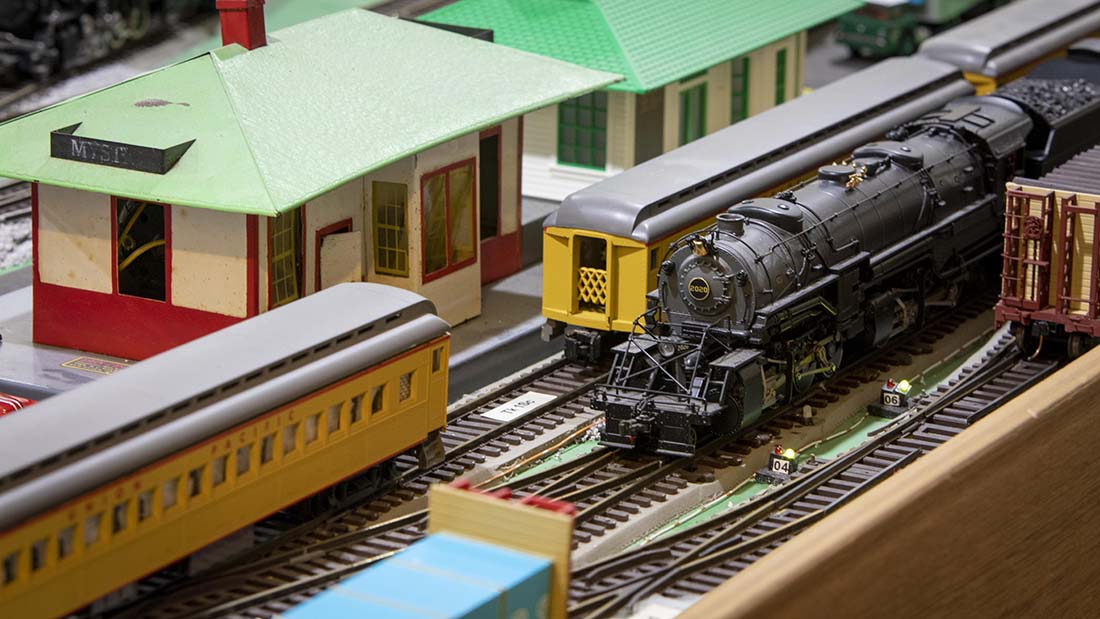 An American Flyer SD70 diesel engine pulling a freight train on track two passes by the inside of the train depot and prepares to cross a road from town to the depot area.

Like most of the engines operating on the layout this engine operates with the Lionel Legacy control system which has “Crew Talk” or other functions operated from the hand-held controller. 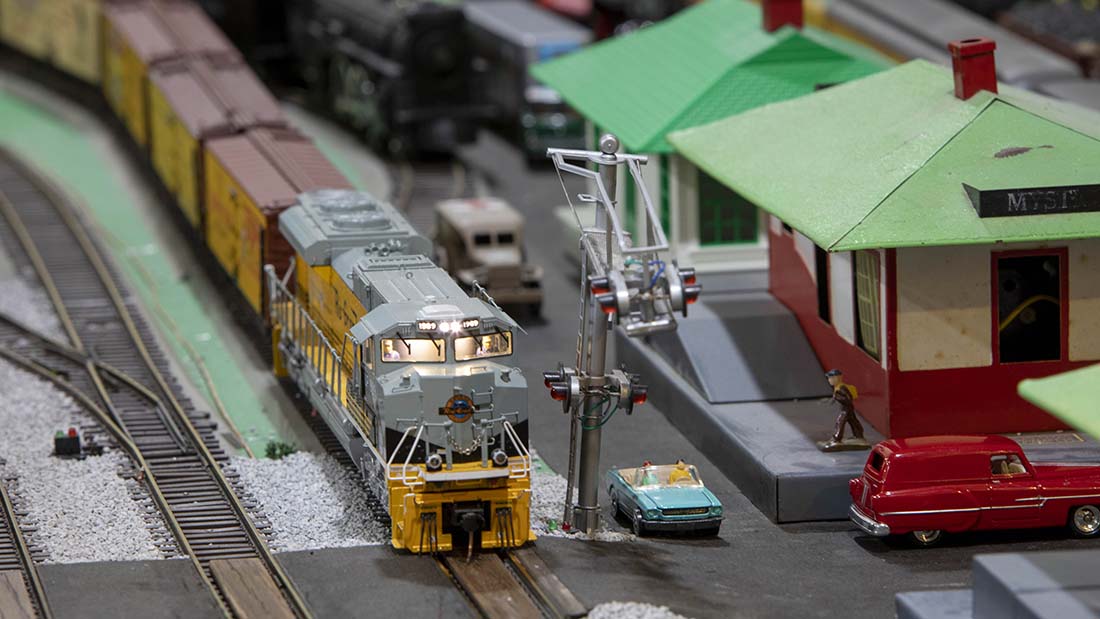 Some of the buildings in the town are shown below. 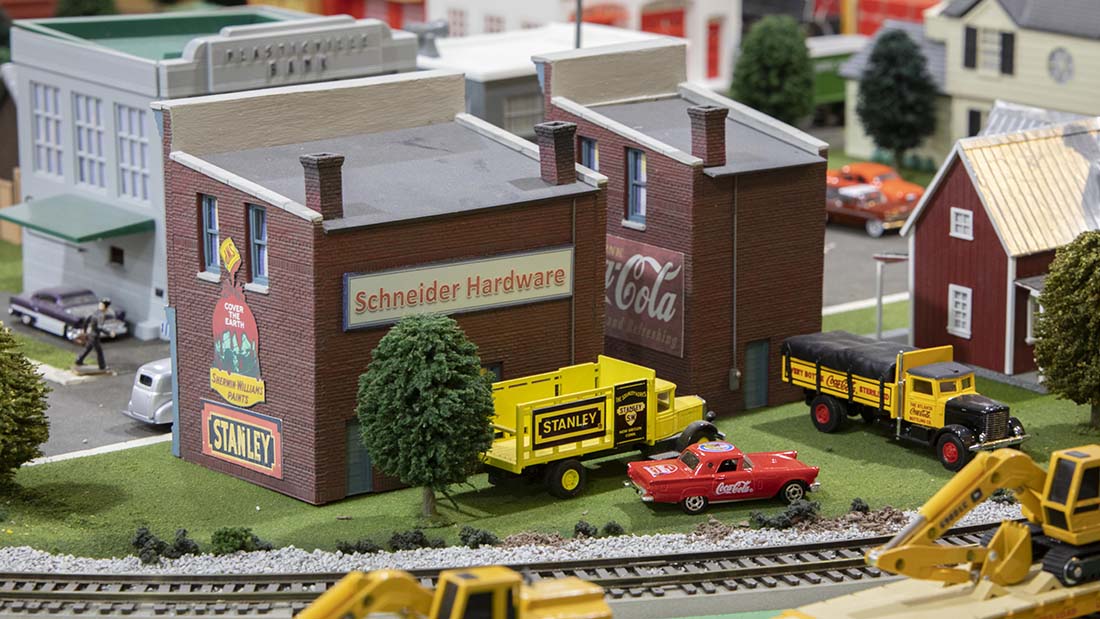 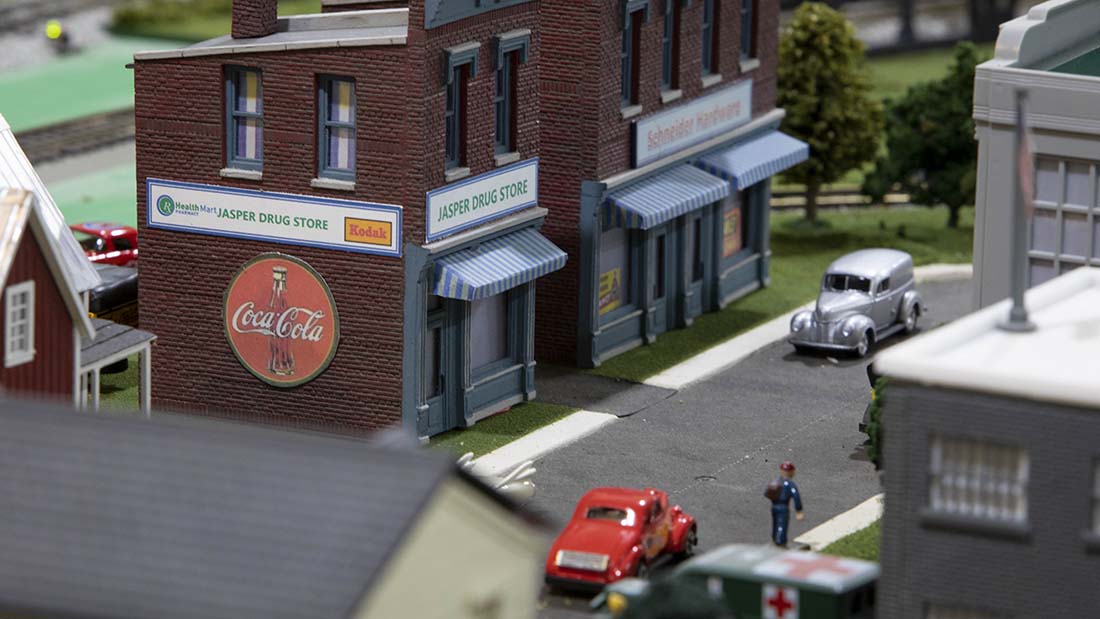 The church is located beside the road as it enters town. Children play in the side yard, which is common to the school located on the adjacent street. A station wagon enters the parking lot in front of the church with a policeman controlling traffic at the intersection. 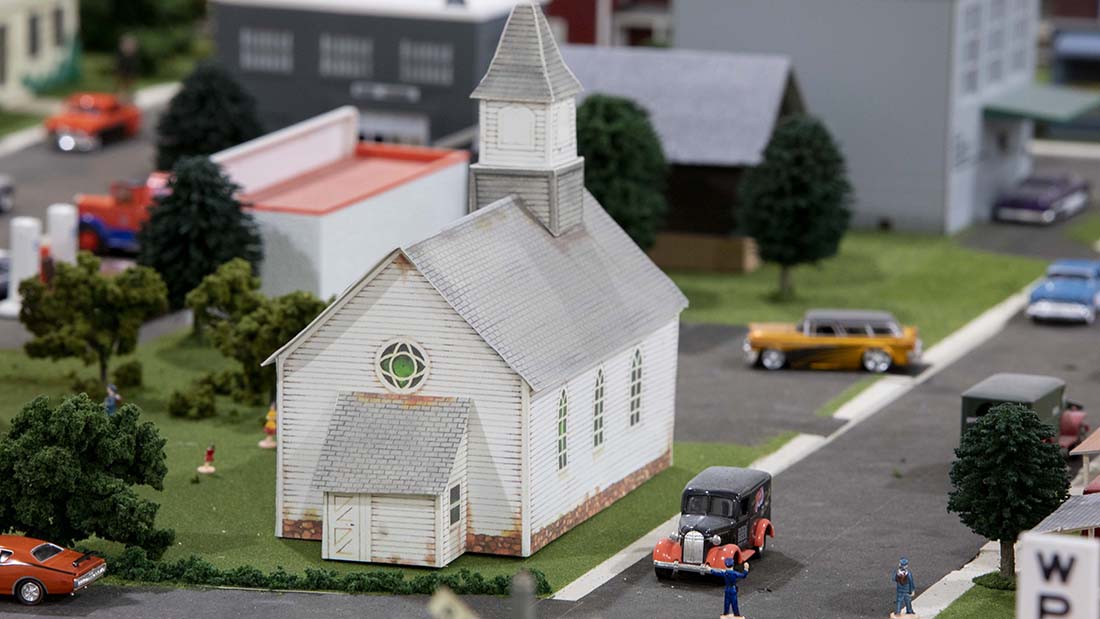 A freight train with two American Flyer U33 diesel engines crosses the river bridge on track three as it enters the town area. The river at this point is on the lift-up bridge section that opens to allow access to the interior of the layout. 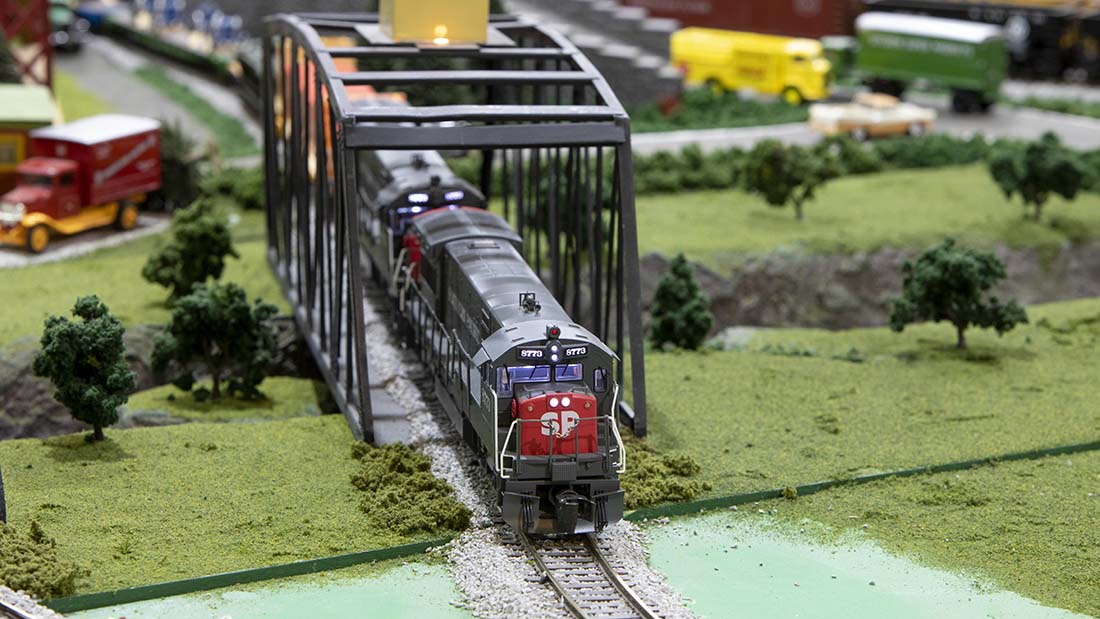 Located on the ‘other side of the tracks from town’ is the A&W Root Beer stand, a popular attraction in our youth. Cars are parked in front with a couple of guys waiting to place orders as others enjoy their drinks at the picnic tables. 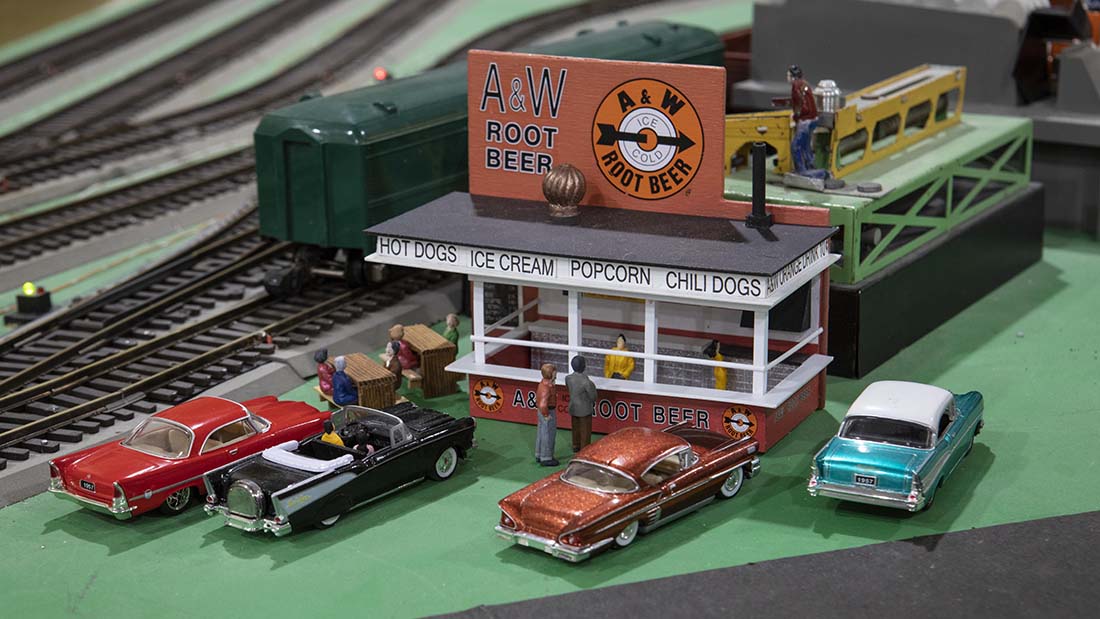 A waitress carries food to the yellow souped-up Ford roadster while a young man talks to his date behind the car at Mel’s diner. 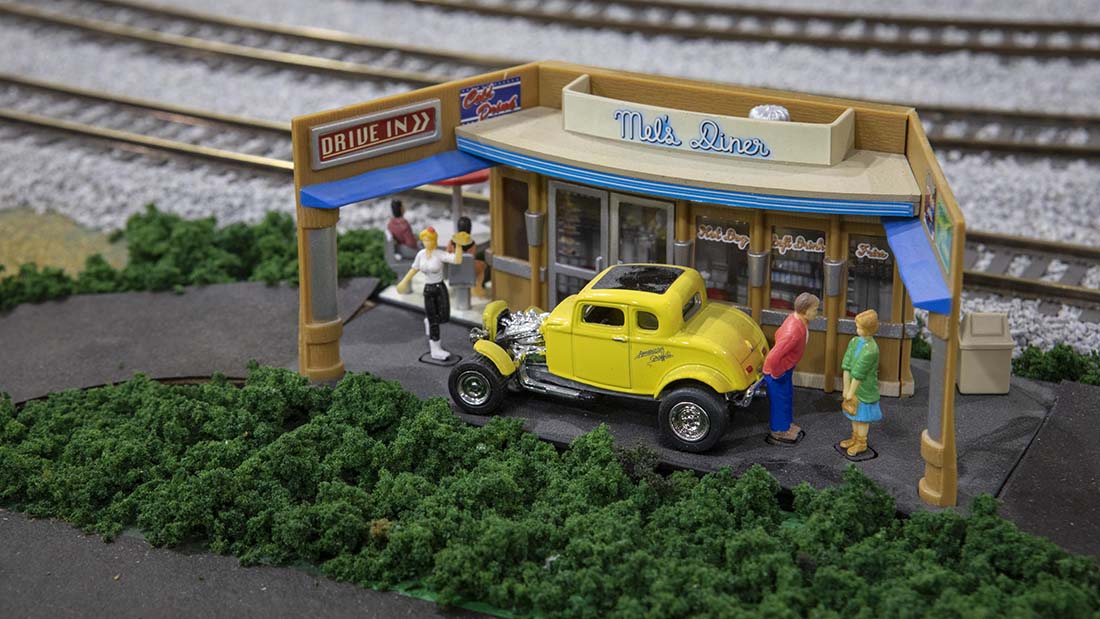 Further down the road from town is the Everest & Son Country Grocery store. From appeances it has become a general merchancise store over the years, with old tractors stored by the side. A 1932 Ford Model A coupe is getting gas while a Model T coupe waits for its owner to return from the store. 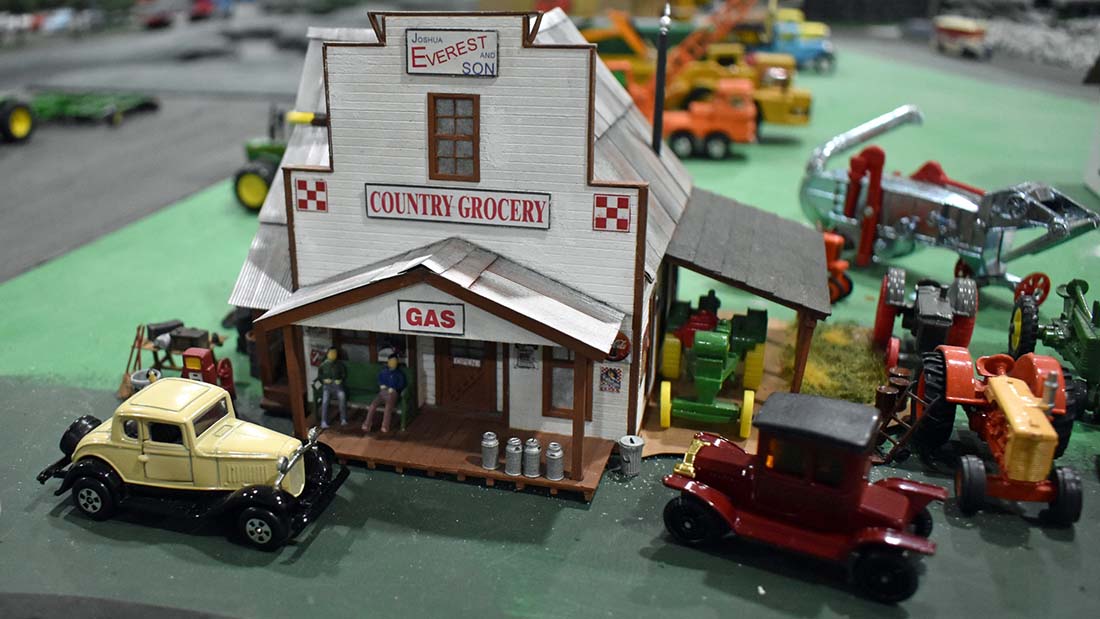 Just past the general store we’re in the country and find a one-room country with a swing set and tetter-totter stting by the side of the road. The Wycoff school is named after the one-room school that I attended from the fifth through eighth grades, with thirteen kids in eight grades. 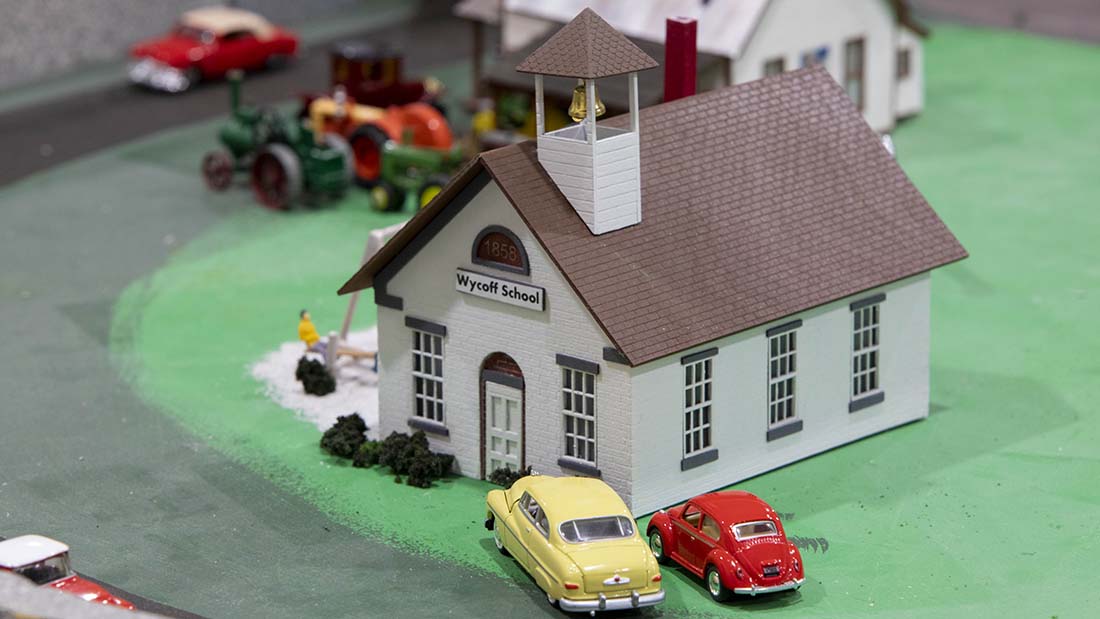 One of the two large scratch-built railroad bridges that span the river and the lift-out panels that provide access to the center of the layout. An American Models K4 streamlined steam engine meets an American Flyer U33 diesel engine at the end of the bridge span. 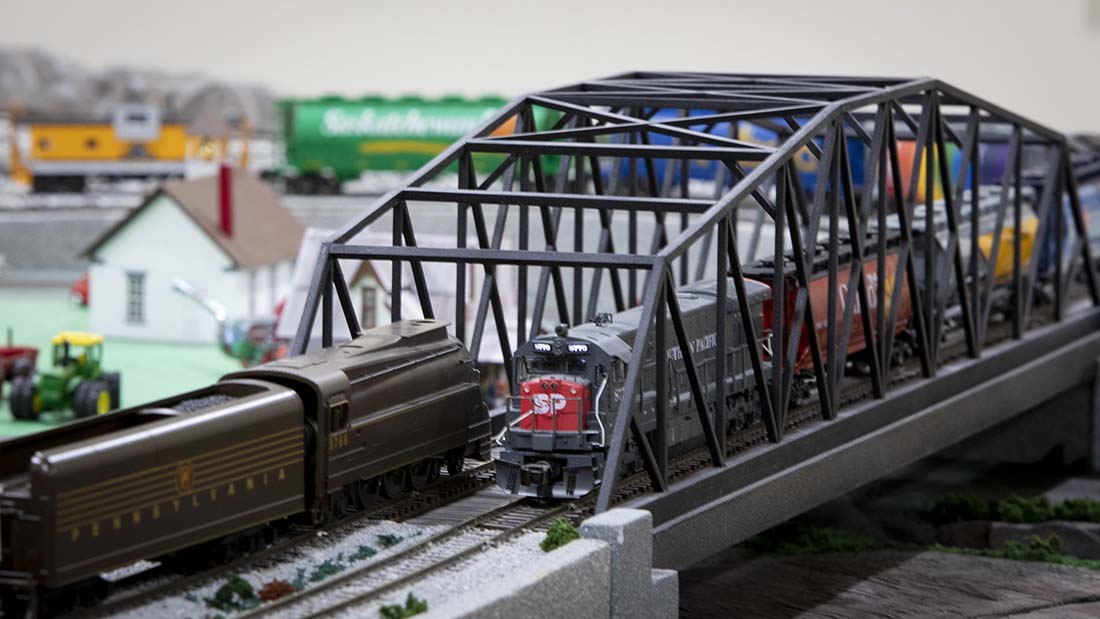 On the side of the layout all six tracks align next to each other adjacent to a two-bay engine house. Three trains parked on the tracks include two U33 diesels, one in Southern Pacific and one in Santa Fe colors. 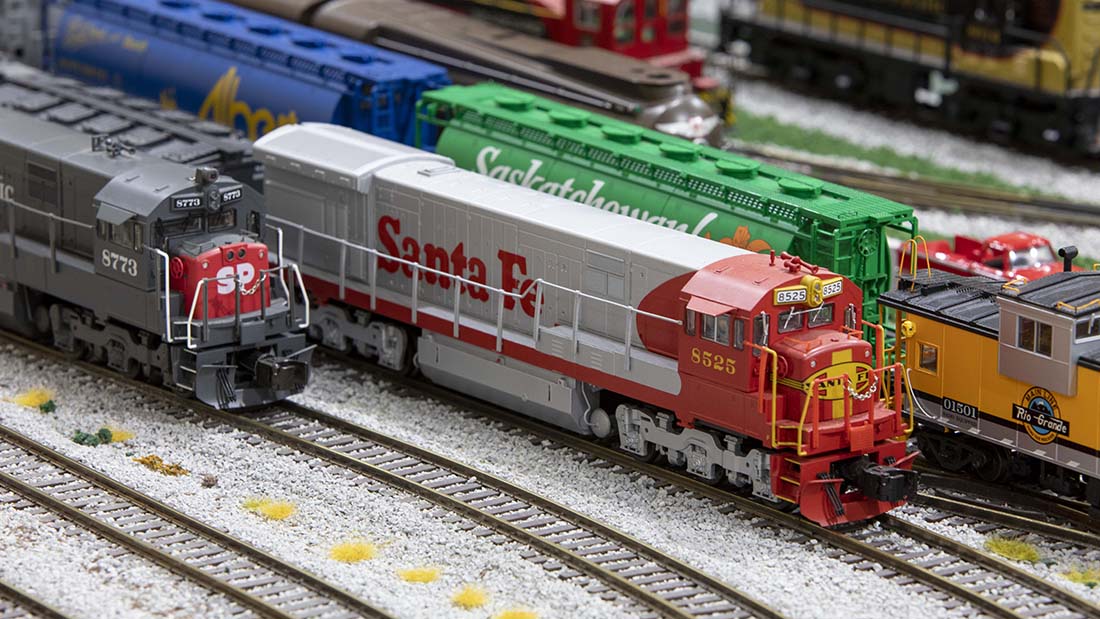 In the middle of the layout is an industrial area with three factories and an oil storage site. Trucks are backed up to the dock area picking up or making deliveries. Three railroad sidings loaded with freight cars serve the factories. 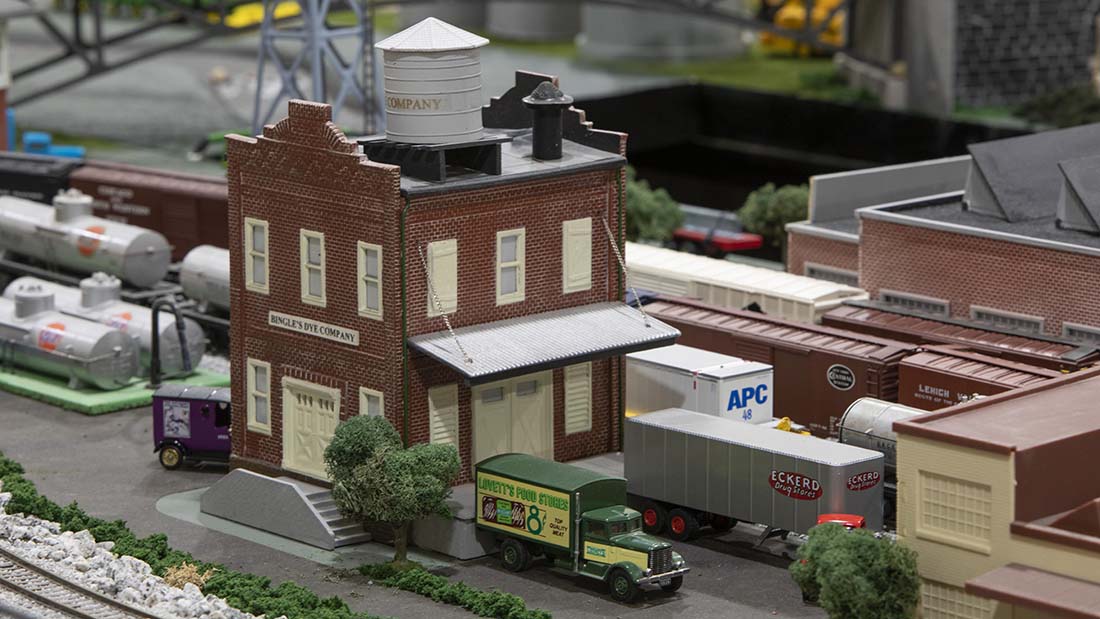 The Rio Grande SD70 pulls the 33-car beer train over the elevated section and starts across a bridge over the river. Three grain bins on the other side of the track store grains from the farm. 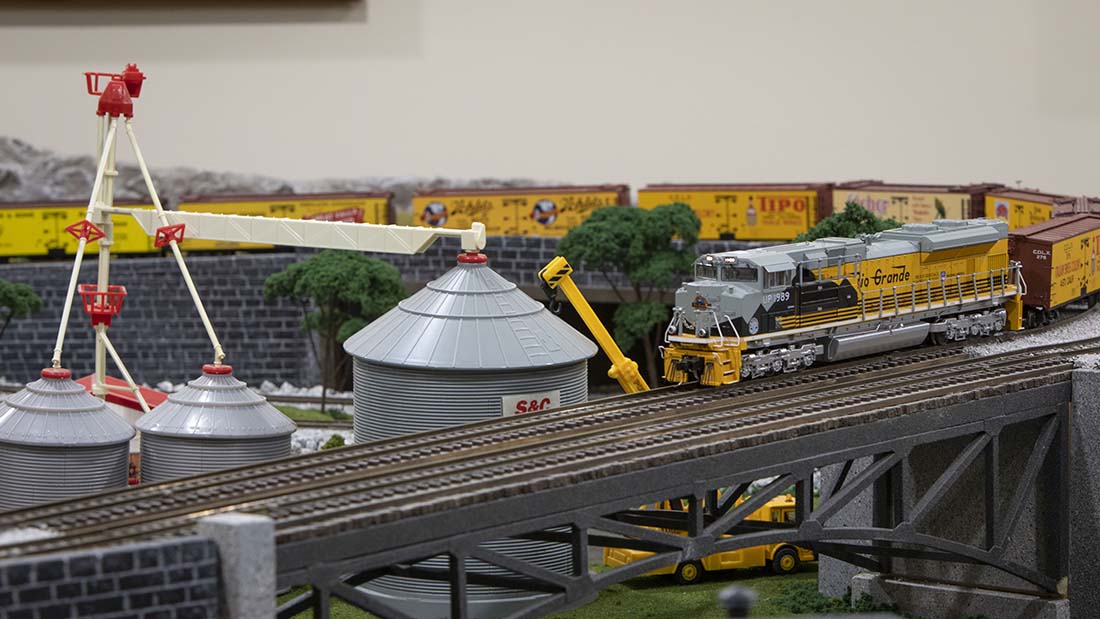 The elevated section supports tracks one and two and passes over the Farm. Since I grew up on a farm that was located next to a river this had to be a part of the layout. The farm sits between the elevated tracks and the river, with a cattle lot on the other side of the river.

The beer train on track two is made up of refrigerated cars bearing logos for different brews as well as a few wines. 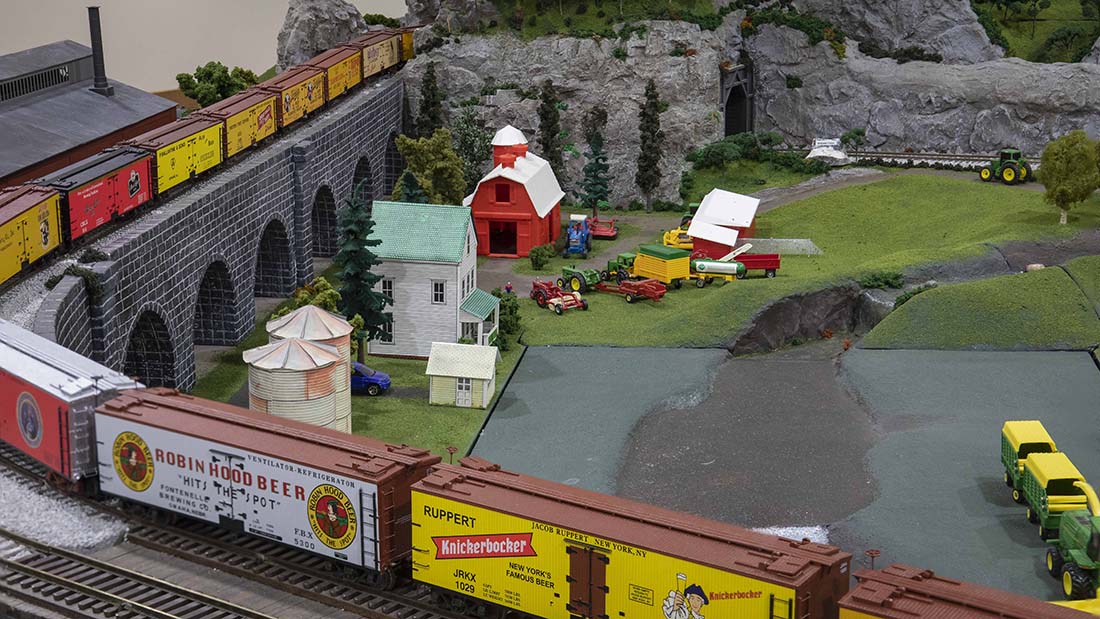 The deer grazing at the top of the mountain have an excellent view of the HO train sitting below and of the entire layout, with the beer train winding around the elevated section and the town in the far distance. The river passes by the farm nestled at the foot of the mountain before flowing downstream 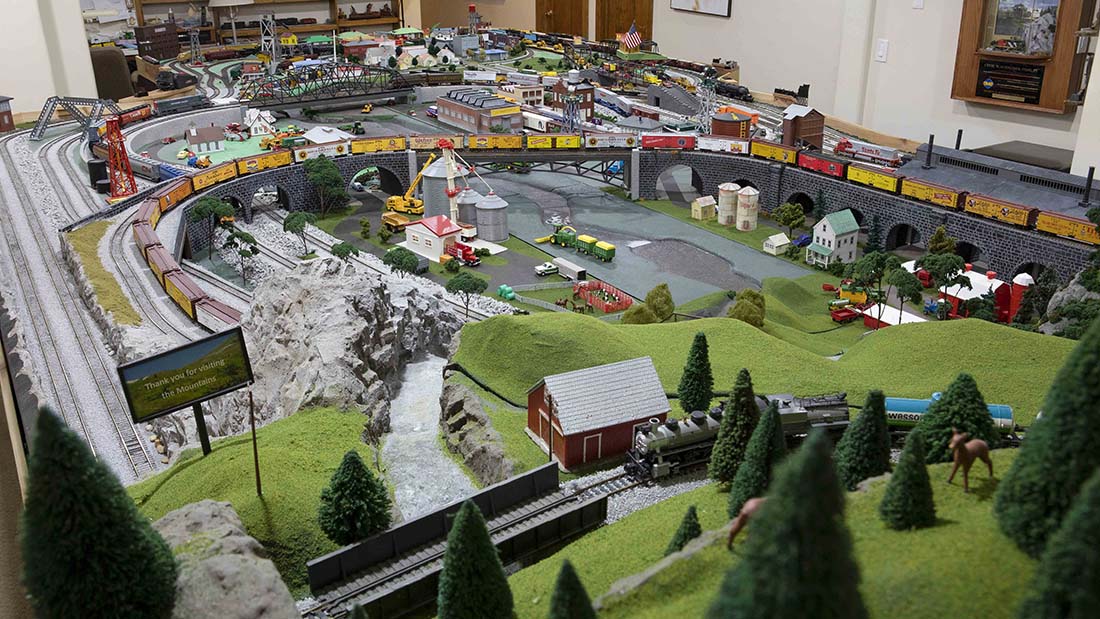 There is a lot of work remaining on the layout to get to a ‘completed’ status — but I don’t believe that any layout is truly complete because the builder will find something to change when it ‘looks done’.

Installation of train sensors on the tracks to operate the crossing lights and signals is high on the priority list and planting of more trees on the mountain meadows comes in second.

A huge thanks to Cecil for putting together such a wonderful narrative, and so many pics.

Hope you enjoyed it as much as I did – please do leave a comment below, and hopefully we’ll get some more S scale model train layouts sent in.

Course, I’m biased, but I loved the church he’s made from the print out scenery (which is here).