Dale’s N scale build from the ground up

“After having an HO layout as a kid, I decided that, at 68 years old, it was time to have another one.

This time, due to space limitations, I had to go with N scale.

My design considerations were 1) that I would be able to sit back and just watch trains run if I wanted, or 2) have a hands-on “operating” session if I wanted. The first consideration mandated a closed loop; the second mandated rail-served businesses with sidings and a team track.

The following track plan gave me what I needed. 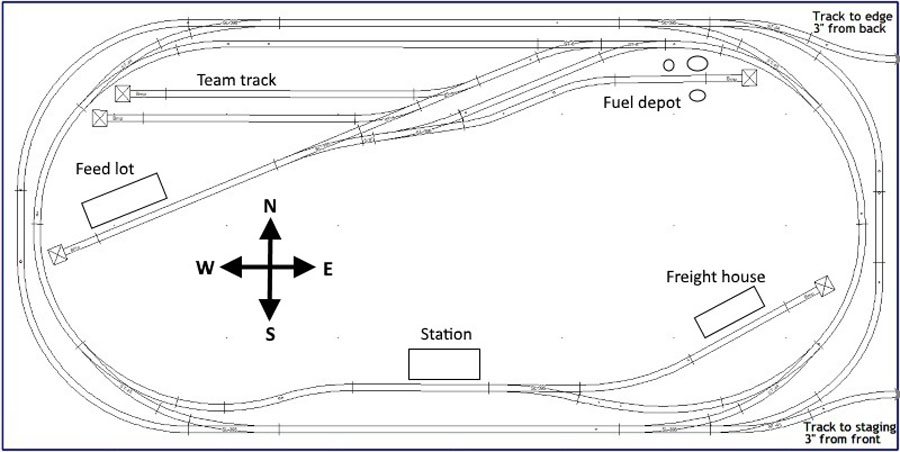 The second major design decision was era and locale.

Era was easy since the limited space required tight radius curves. Thus, a time frame of the 1950-1970s was indicated, where locomotives were diesel and relatively short. I went with an EMD GP7 and an F7a. Rolling stock had to be no more than 60 feet long.

Locale was a bit harder to decide until I started thinking about the operation aspect. I set the scene as an area in a small town, not the center of town but somewhere on the edge of town. Since it depicts an area no more than a mile or so east to west, I kept to flat terrain. 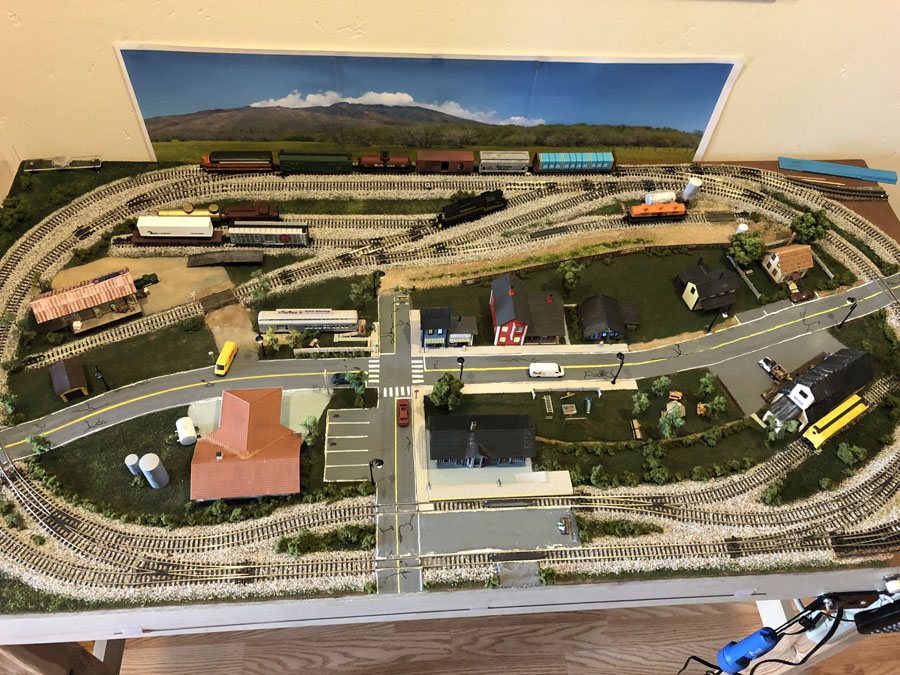 There are two spurs at the east end where a staging yard or connection to an expansion can be done but I haven’t decided if I will build them.

The only way to get what I wanted in the space I had was to model in N scale. The layout measures 2 feet by 4 feet.

The layout is on a piece of 3/8 inch MDF attached to a framework made from 1×3 lumber. The height is 42 inches. This height is right for me to operate the layout while standing (and high enough to keep my lazy cat from jumping up on it.)

The track is a combination of code 80 Atlas flex track and Peco turnouts on N scale cork roadbed. The sidings to the businesses are sloped so that the track at the business is at ground level. The tightest radius on the layout is just under 8 inches.

Wiring is 14 gauge for the DCC bus to the track with feeders every 24 inches. For the LED lighting in the buildings and the street lights I used 18 gauge stranded wire. All wiring is color coded so I can tell easily what lines are for what purpose.

Taking my time, the layout took about a year to build. Or, more correctly, I took about a year to build it. I wanted to go slowly and get it right, especially the trackwork. I had to take up and replace two of the Peco curved turnouts because the original ones kept causing derailments and I finally got tired of trying adjustments. Once replaced, both worked fine without fiddling with alignments.

As I mentioned earlier, the layout is designed for two styles of running. Sometimes I just want to sit back and watch the trains run. For this, I will have one train running westbound (clockwise) on the inner loop and one eastbound (counter-clockwise) on the outer loop. I often do this when I’m thinking about some other problem or deciding on what to do next.

Although there is a station, there is no passenger service. With the tight radius required, passenger cars are just too long, or too old style for the era, to look good on the curves, so the station is pretty much abandoned.

Even for such a small layout there is sufficient challenge for operating it as a railroad. Here’s how my imagination guides it.

The outer loop becomes an inter-city mainline and is not part of the local scene unless the manifest train on it needs to pick up or drop off cars. Pick-ups and drop-offs are done on the back part of the inner loop. Once that is done, the manifest is constantly in motion around the outer loop but is “seen” as going to or coming from somewhere off site. Since the outer loop is not “really there” it can’t be used in the switching of cars for the local businesses.

So, an operating session, which may take anything from 10 to 30 minutes, starts out by the switcher picking up the cars that are due to be routed out the next time the manifest hits town and staging them on the back of the inner loop. When the manifest, headed up by the EMD F7a, has arrived, dropped off the cars tagged for the town, picked up its new batch and departed, the EMD GP7 switcher has to do its job of delivering the cars to the appropriate business or to the holding track.

To keep things interesting, (remember, you can’t use the outer track) the siding to the Feed and Seed at the west end of the layout can only hold the locomotive and one car and still clear the turnout.

The run-around there can only hold one car and the locomotive and still clear the turnouts at each end. The distance between the points leading to the fuel depot and the Feed and Seed can hold the loco and two cars. All this together means that care must be taken to move the cars so that the loco can be at the proper end of the car it needs to spot.

A car may be at a business or on the holding or team track for no less than one and no more than three operating sessions. Plus, some cars may be routed to either the Feed and Seed or the freight warehouse, depending on what I think it’s carrying. Other cars will never be sent to the Feed and Seed since their contents make no sense there. And, of course, tank cars only go to the fuel depot or the holding track. 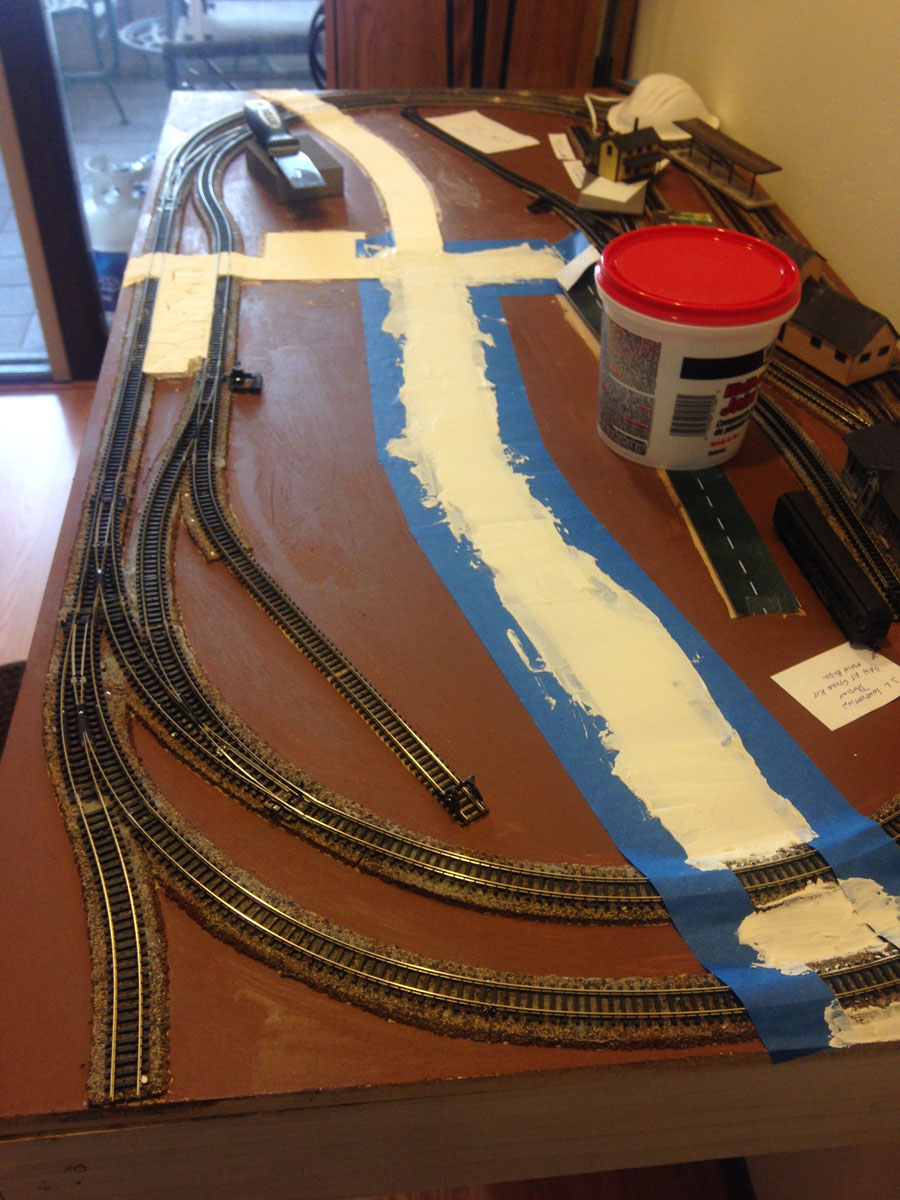 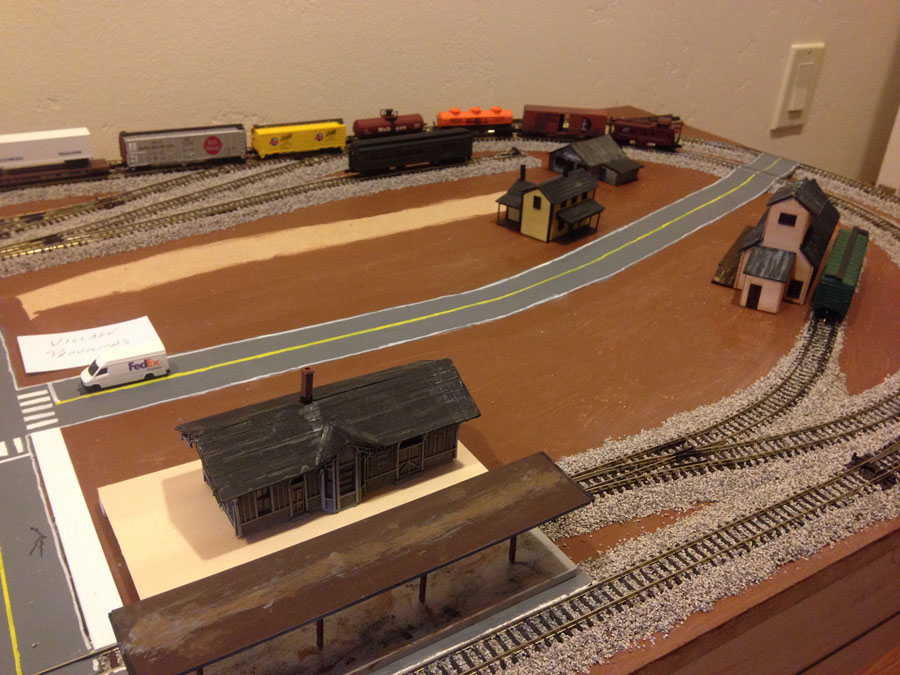 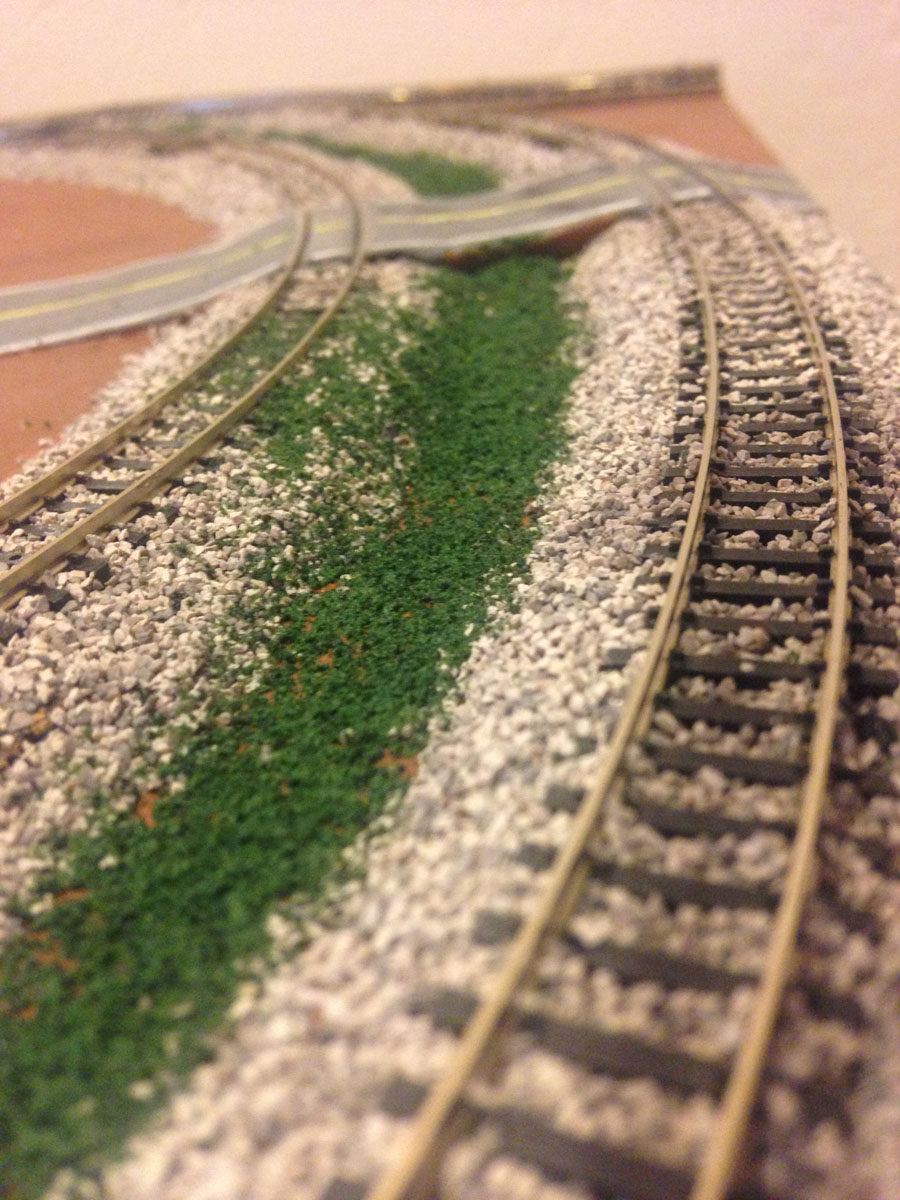 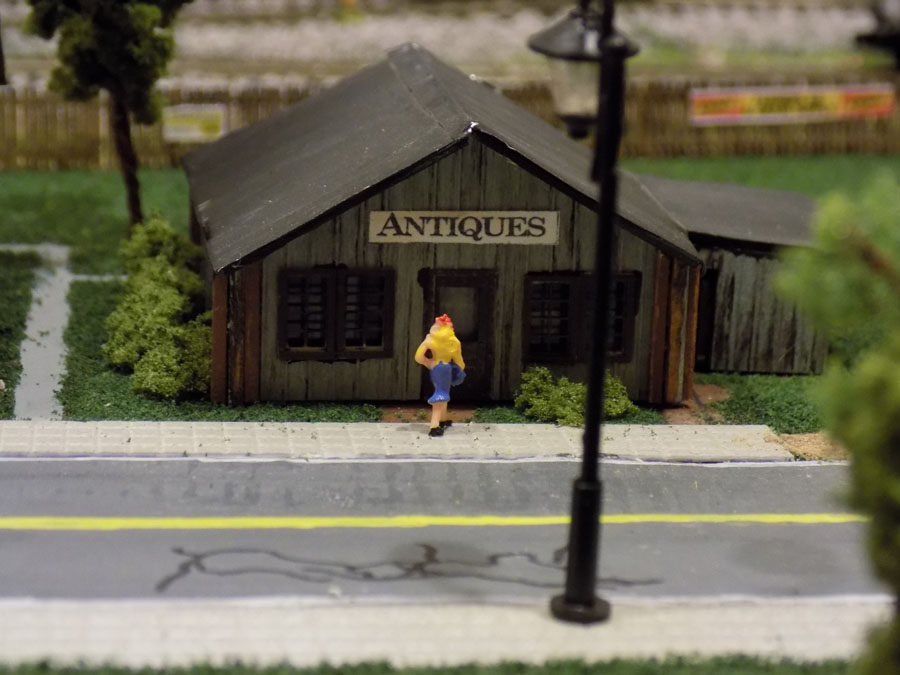 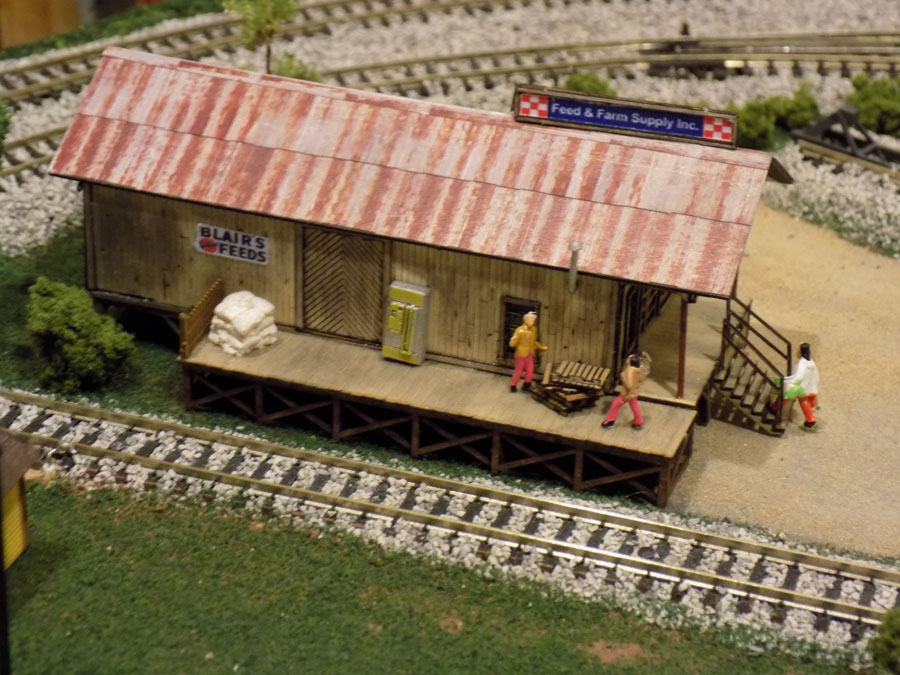 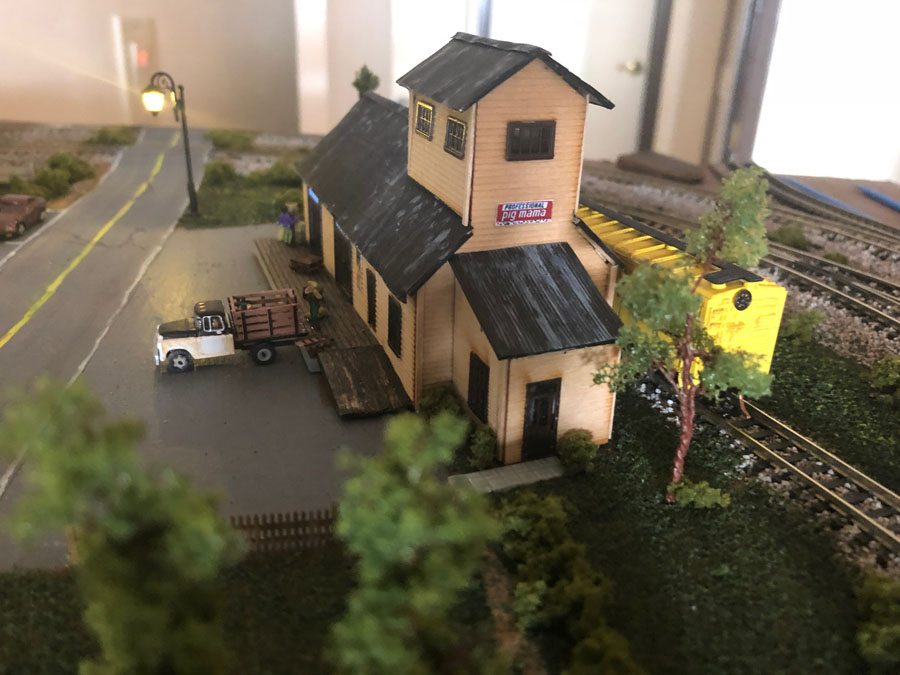 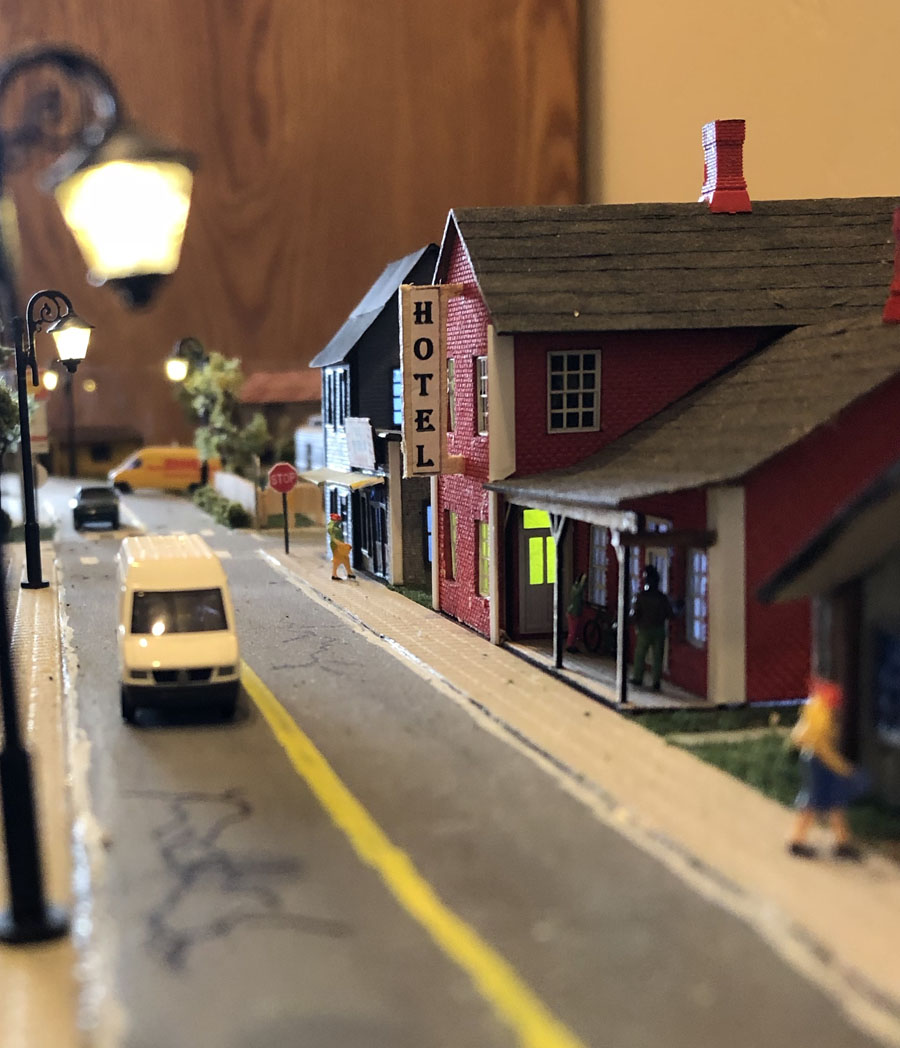 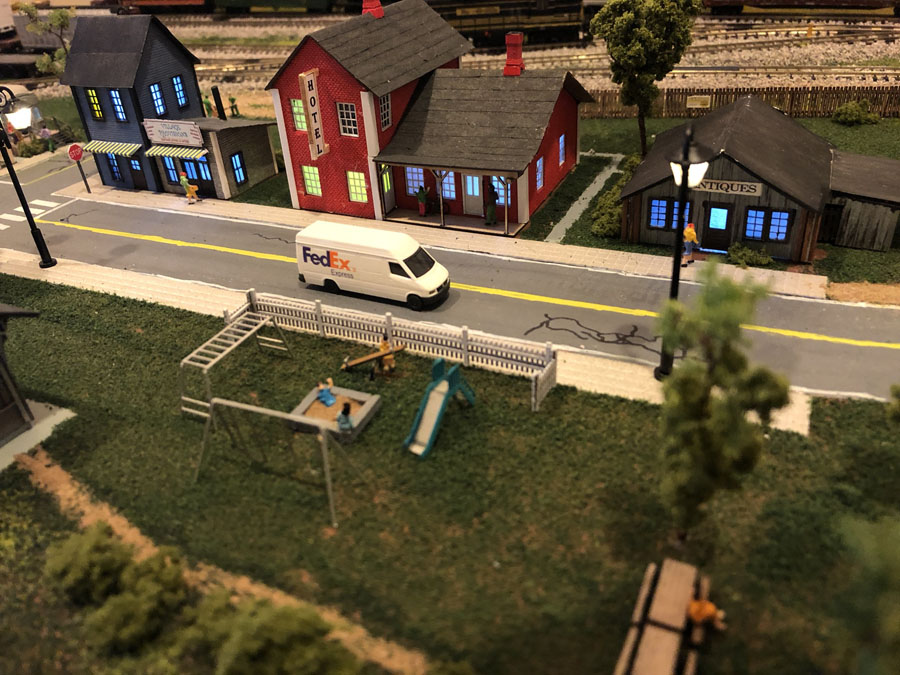 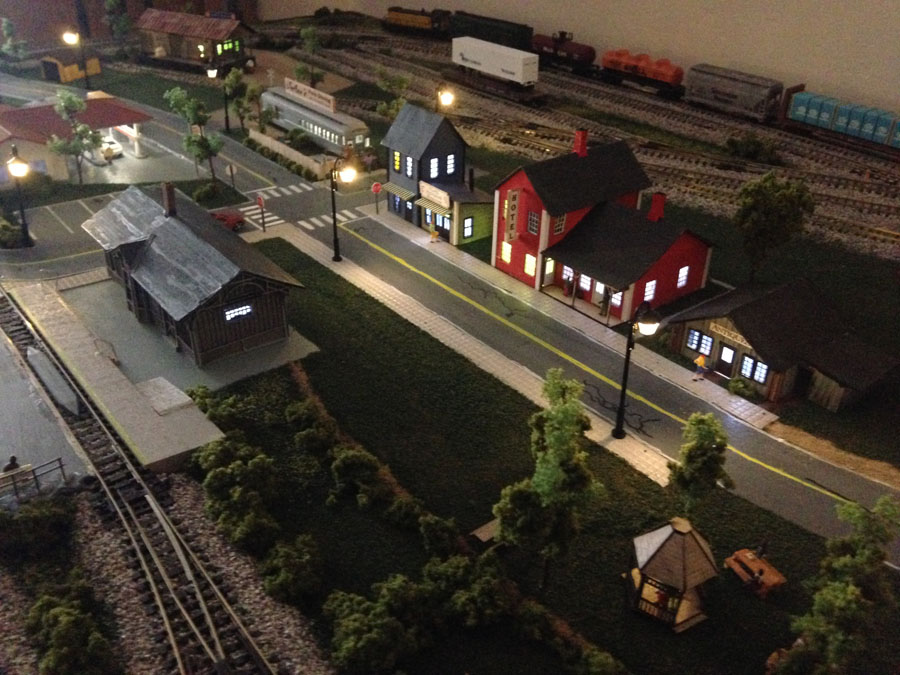 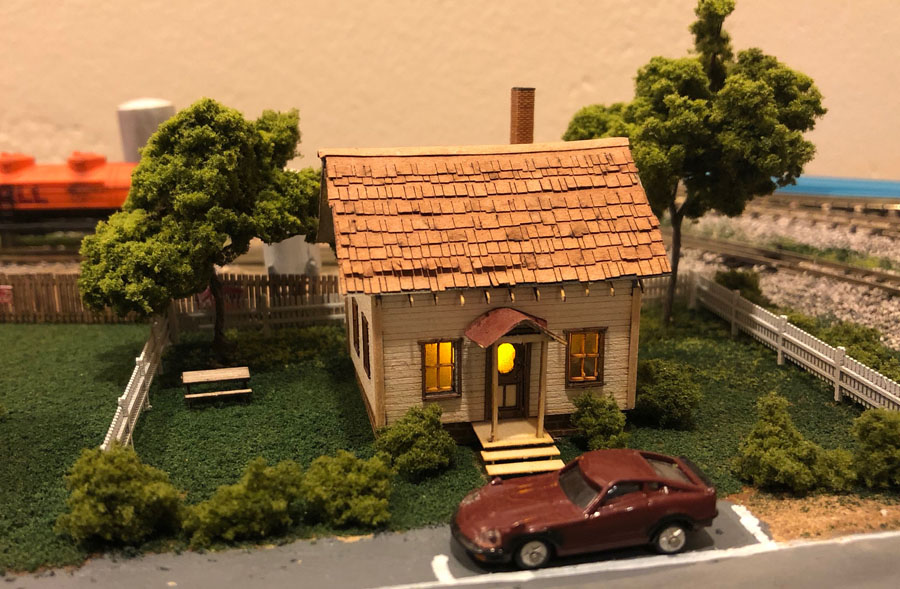 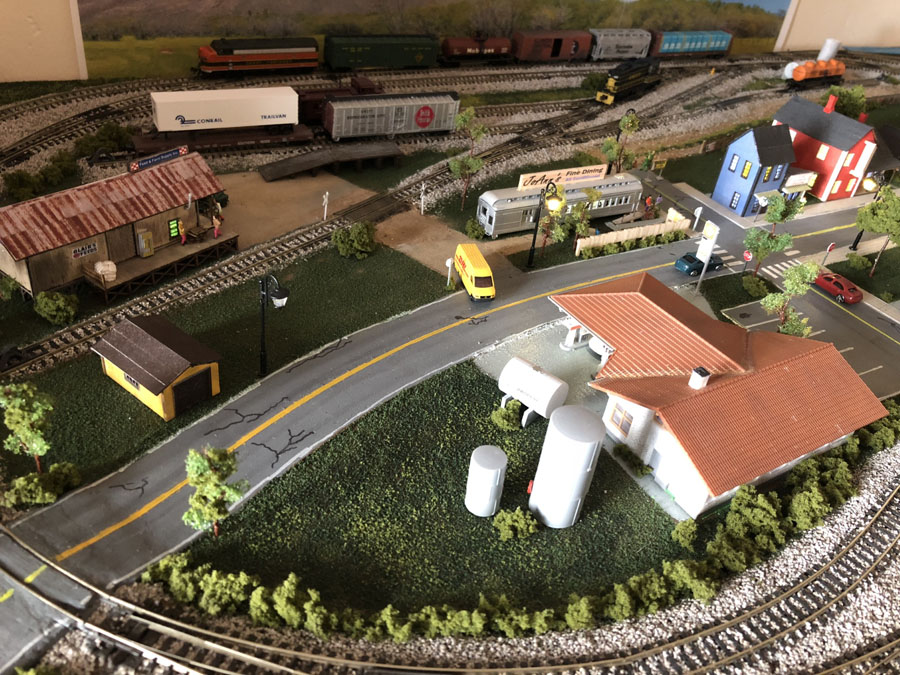 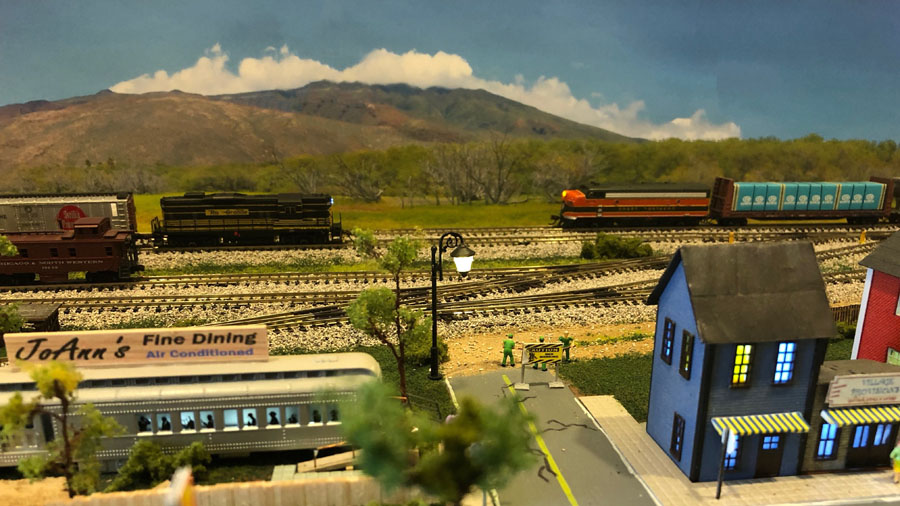 I printed out a three-page wide backdrop and taped it to the wall behind the layout.

Hi Alistair… just uploaded this video, showing two different ways to add lights to a coach on the layout, also adding people, then I show the CMX track clear at work, and how it works, and of course finish off with a bit of a running session

A huge thank you to Dave and Dale. Really liked Dale’s narrative – so many folk overlook a theme / locale / era – and they are so important to breath life in to a layout.

That’s all this time, folks.

Don’t forget the Beginner’s Guide if you want to stop dreaming and start doing.