We start today with Terry – and his last post is here.

“Alastair: A few weeks ago I asked for help from the members here in creating an addition to the Damnit Railroad.

Thank you for publishing my plea and from the members who responded with numerous ideas.

I have tried most of them and have ended up taking a bit from each one to make what I think works best for me. As you may remember I was trying to build a 24 inch radius car storage area for very long passenger cars.

Although several folks recommended a helix with the tracks below table level–that doesn’t work well for an old guy who would have to get down on his creaky knees and fumble around. Many suggested a switch on the blue line near the word “up” but because that is the start of an elevation rise and the need for another crossover on the green line, it was just too complicated to build.

I also found out that because of all the loops on the original portion of the railroad I will now be able to turn the trains in opposite directions on the extension WITHOUT having to worry about rail polarity.

Although I’ve gone over the track several times, if someone happens to see a place where I need a reverse loop power connection please let me know. The other good thing is that all of the track on the extension is at zero elevation so no worries about grades.

I added a 3 way switch to solve one of my problems and left an area for possible expansion of a shop/turntable section.

I’m attaching some photos–the first is my original extension that your members were asked to tweak. The second is my final solution to the problem and the last is the extension plus the existing track plan for the layout.

Thanks again to you and your readers…and to “Larry” who loves lots of switches–you should be very happy.

If and when I actually build it, I’ll send you some pictures if you like. 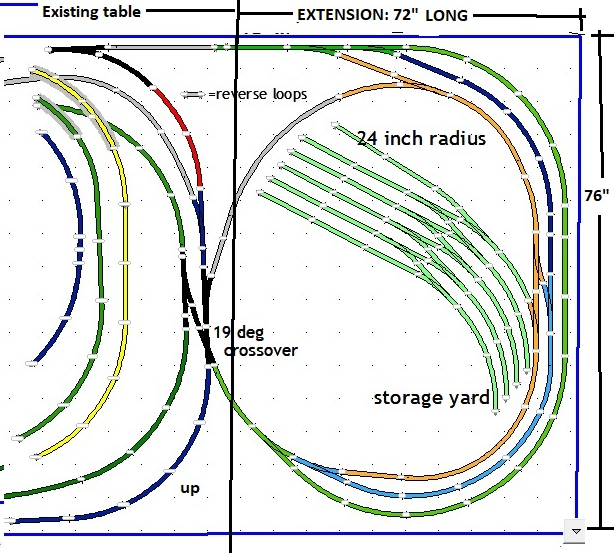 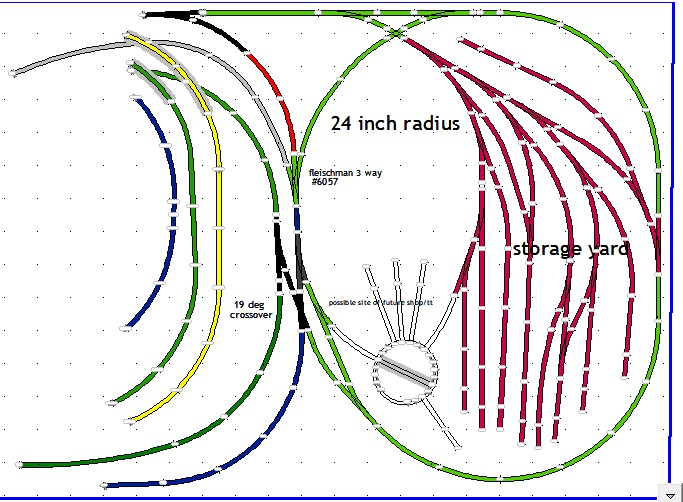 “Hi, I’ve enjoyed your postings and have started to set up my old trains again after many years.

I’ve had some of these since I was a child, others have been bought more recently. These are American Flyer trains, mostly from the 1940’s, 50’s, and 60’s, though some are newer.

Lots of issues to deal with, the bench work needs bracing, the older locomotives are not always willing to run, and the switches are causing problems. The stuff on the table is not in any real placement yet, and the lights and accessories need to be wired.

Lots of work to do, but that’s part of the fun. I like the idea of keeping these old toy trains running. 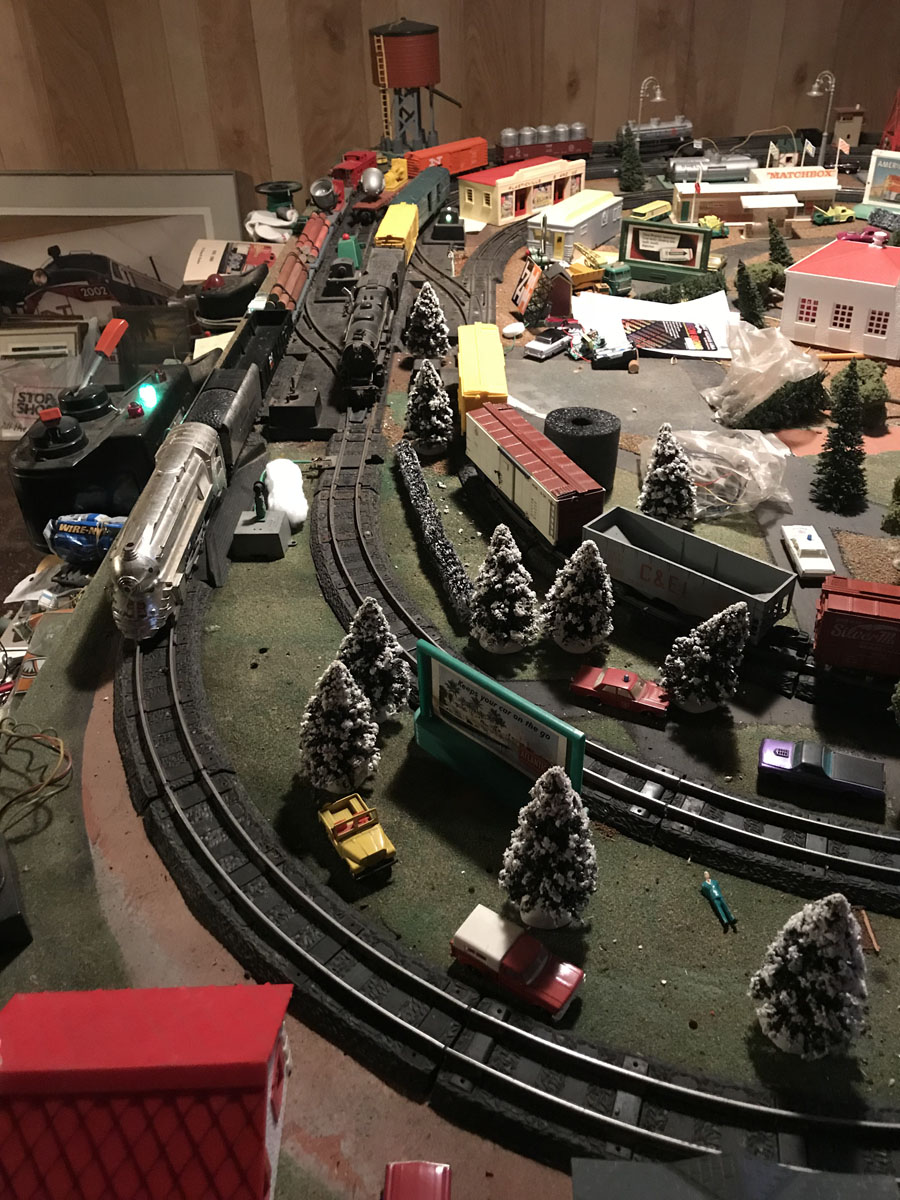 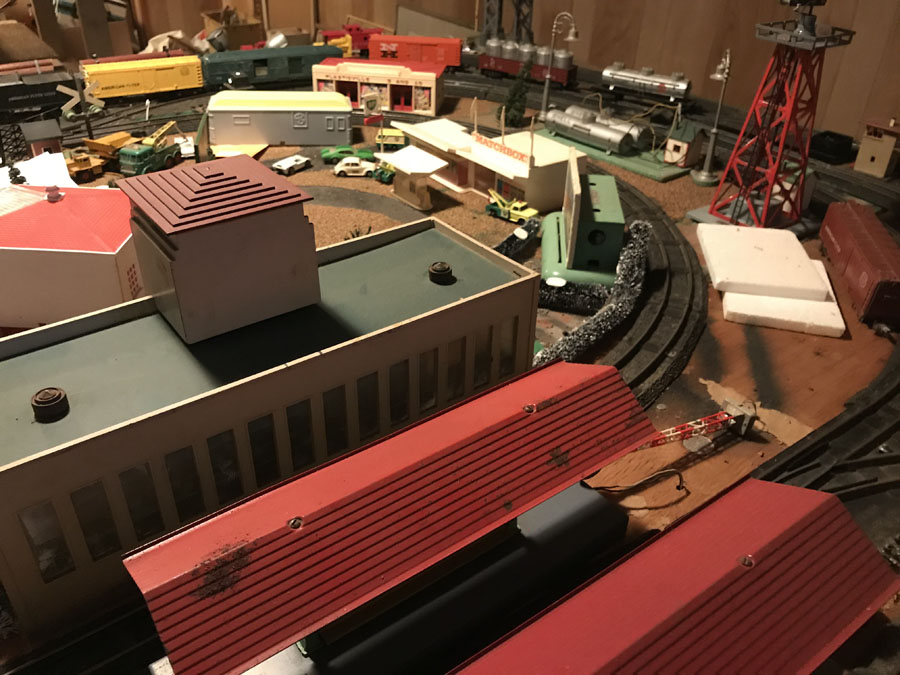 Simple easy-peasy way to connect track. I work in N scale but this could work in any scale.

Atlas makes a rather cheap looking bumper for and end of line stop and it’s not at all prototypical.

However, the use I found for mine was to use it to slide track connectors onto the rail.

First, take the bumper and file the base of the short rails just enough to make it easy to slide on a rail connector. Filing the shorter rails allows the connector enough room to slide it onto the track. Do this on both rails.

Now you can slide the connector easily onto your new “tool” and then slide it onto the rails of the track you are laying. Also if it’s a bit tight you can spread the connector with a small jeweler’s screwdriver, or what I do is simply run a file along the base of the rails to help it along.

This is the quickest way I know to attach the sliders without using needle-nose pliers or pressing them on with your fingertips. The latter seems to hurt after a while.

Remember to solder all connections for trouble-free running of your trains.

Next tip is how to build engine sheds, warehouses, barns, water towers and the like using bamboo reed on a cardboard frame using only wood glue

Roger’s mail made me smile – I get so many similar ones. It’s hard to throw away the memories of your childhood, and how much better if you can get them going again?

A big thanks to Terry, Roger and Steve.

Don’t forget the Beginner’s Guide if you more tips and tricks than you can shake a stick at.