Since we last traded notes I’ve been very busy on the western end (The city of Port Charles) of my layout. I’ll send some slides and a video if i can figure out how. Hope you like ’em.

I think one of my personal triumphs was figuring out how to light up all my cars with fiber optic strands.

I’ve been using .75 mm single strand fiber optic line for all the back drop lights, so I managed to drill out the headlights of a couple dozen plastic N scale autos, pushed the strands out through the lights, and through the floor of the car, then passed them through a 1/8″ hole in the street to a light source under the layout. in my street scene. Half were drilled (oncoming) for white headlights, half for red taillights. It really provides some visual excitement to the street at night.

Together with high rise kits, neon signage, I was pleased to see my city really come alive these last few months. My city backdrop is just a sketch at this point, but I’ve installed hundreds and hundreds of fibre optic strands to simulate night high rise windows, flashing beacons, aircraft strobe lights, etc.

I’ll send some pics for now, and try to send some more in the next day or two. 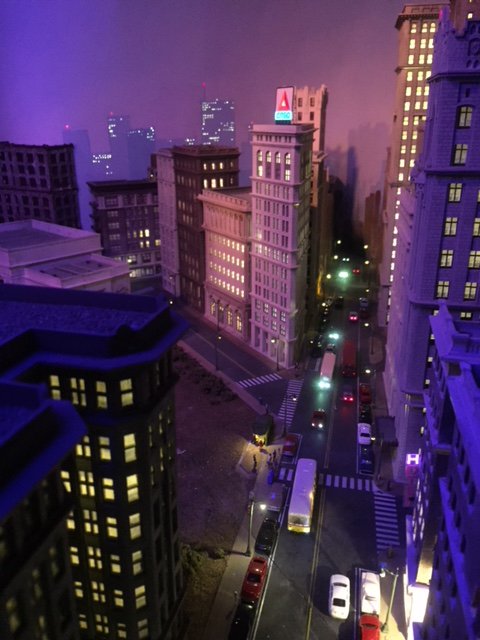 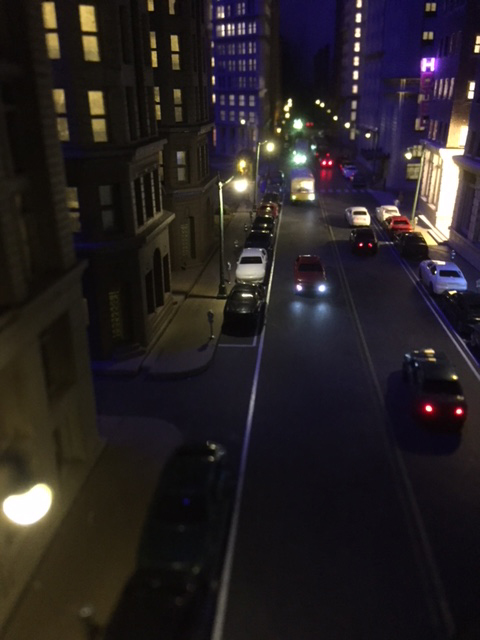 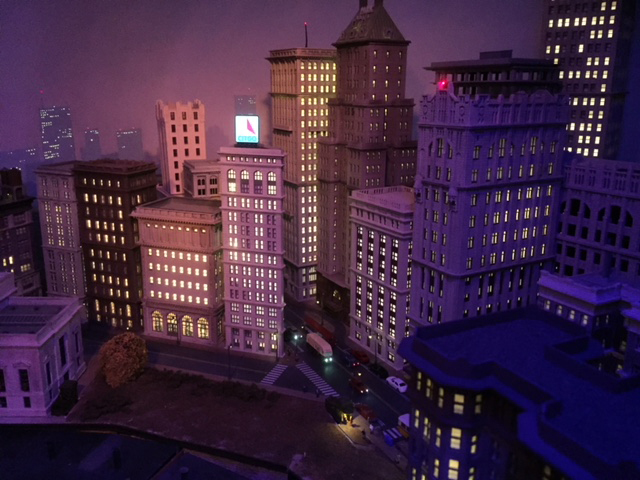 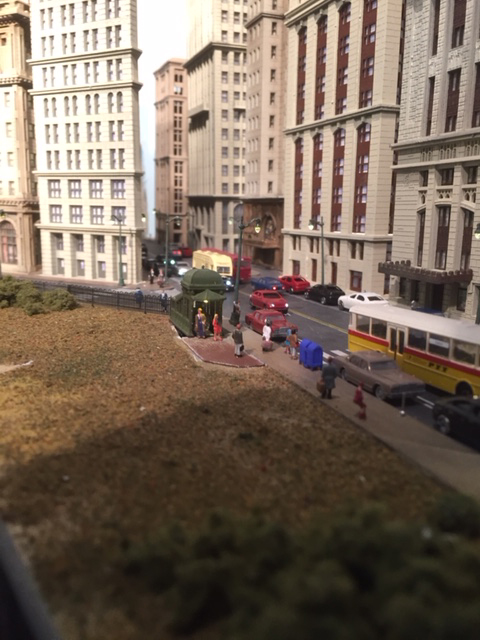 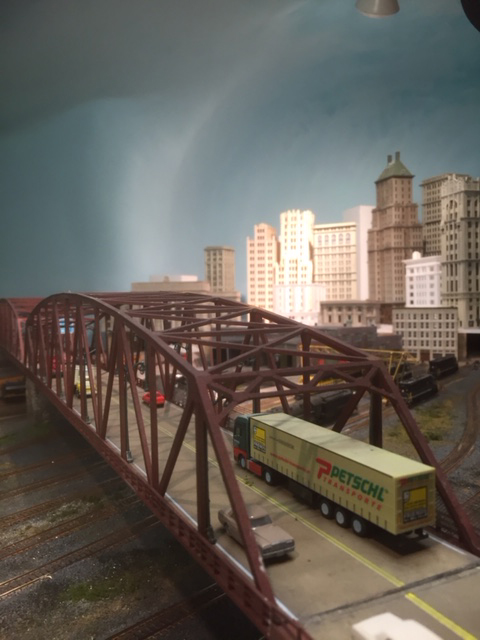 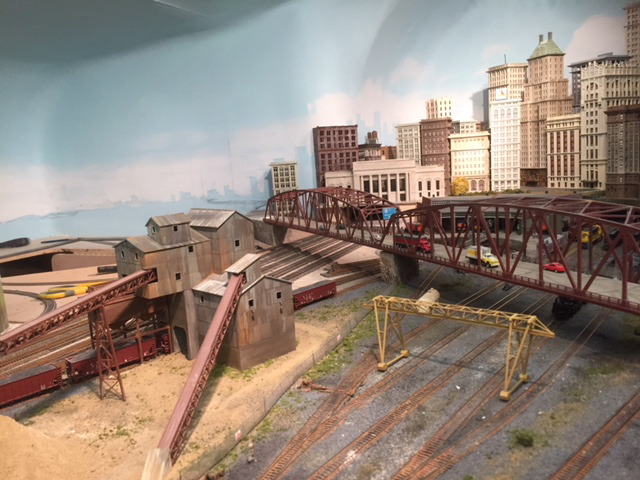 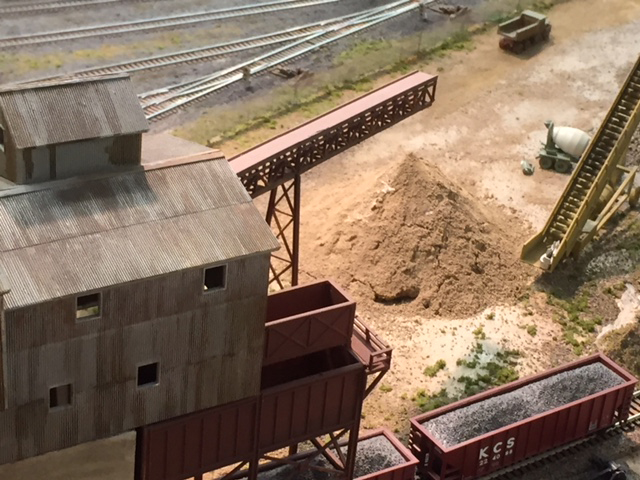 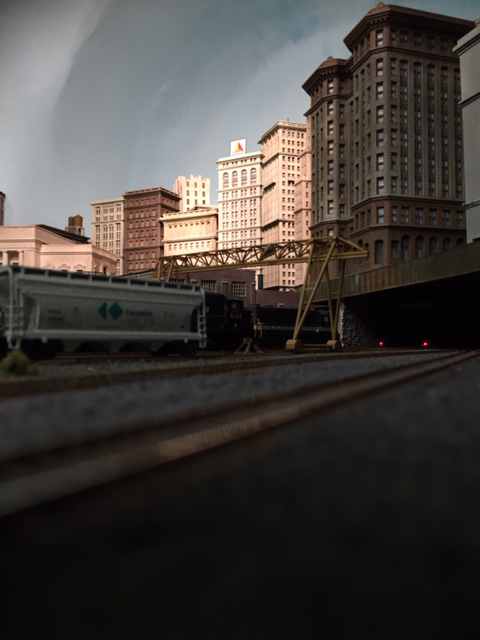 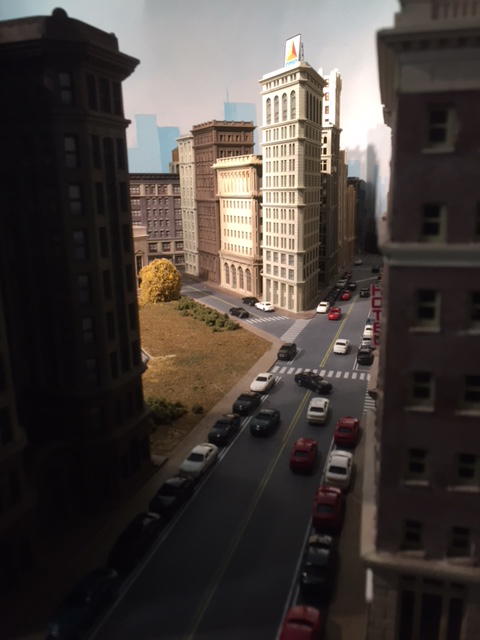 Stunning stuff from Fred (his last post is here)

Here’s what I really like about Fred though. I asked him if his layout was a ‘professional’ one. Here’s what he came back with:

“My layout is just for fun. Although one of your group during the last comment session sounded frustrated with the extent of some of my detailing, I think, because he felt I was overlooking the trains. In so many words he was saying “what’s the point?”

What he didn’t understand, clearly, were my motives. I’m not particularly interested in the trains (I once was, as a boy) but rather the process of modeling.

I did a lot of it as an architect, but never had an opportunity to do it in color, or with backdrops (I used to paint landscapes in oils) and certainly never had a chance to model anything this large.

N scale is great in one sense – that it offers you the elbow room to design plausible vales and hills, rivers, cities, ports, without that dreadful look that everything has been crammed in there simply because you couldn’t bear to give something up that you really wanted to include.

The bad side of N scale, I think, is that it’s so ridiculously small that most architectural details and surfaces have to be purchased rather than scratch built. Can you imagine scoring scale brick out of plaster at 1:160? I tried, and gave in to the kits. The other thing that is frustrating about N is the fussiness of anything mechanical, and I have to say that the only reliable locomotives I’ve found are all Kato.

I think your group has a majority contingent that IS in it for the trains, which is great, but it’s just a different thing. I don’t want to diminish from their pleasure at operating trains by setting a different standard for scenic modeling which they may temporarily envy, but for which they don’t have the desire to put in the money, time, or risk. It’s about priorities, really.

If each of us can help the other with pointers, tricks, or even by inspiring, I think that’s great. But when I see comments like “I wish my backdrop looked like that,” it saddens me that I might inadvertently be puncturing someone’s ballon. If it makes them feel any better, you can assure them that I am a frustrated model train operator who is a technical luddite, and can barely get a successful locomotive circuit of the layout without drive rods coming off, electrical short circuits form “frog juicers”that were supposed to work, and all sorts of other things that guarantee none of my friends will want to participate in an “operating session” whatsoever. The personal blessing is that it’s not why I’m doing this, so I don’t care!

So in conclusion I think this is a wonderful hobby, whether or not you view it as modeling where you employ moving parts of the model to enliven the static, or operating scale models of railroads with necessary scenic embellishments, but it is very important that we each remember why we got into this in the first place. So your question of me is an important one in the deepest sense, and I hope I’ve answered it.

So love what Fred wrote. This hobby is all about having fun – just as the Hall of Fame members (and others) said in the last post.

A huge thanks to Fred for the pics, the narrative, and the wise words.

And if you’re sat there nodding your head, why not grab the Beginner’s Guide right now.