On Friday, Gary posted about his electrical problem (which is here).

After a wonderful response from you lovely lot, Gary has sorted it – for now:

“Hi… Good Morning and Good afternoon to ALL

First, I want to thank everyone, Alastair and all the railroad modelers that responded to my call for help with the electrical problem I have been having with my layout.

The problem has been identified and – for now – the problem is solved and everything is functioning properly.

I will explain further down by what I mean “for now”

Right now a heartfelt THANK YOU to you all. I really can’t express fully my appreciation.

Now for the specifics:

The problem was the overheating on my original MRC1300 power pack which was providing power for all
the AC accessories; Atlas switches and all lighting.

As of this morning, I had received 51 comments on the blog that Alastair had posted.

Three were on Tony’s layout, two mentioned possible shorts and the remaining 46 (90%) all suspected an overload of the power pack.

Friday morning I made a telephone call to technical support at MRC (Model Rectifier Corp), the manufacturers of the Railpower transformers.

I sent them the blog I sent to Alaistair and the videos and they were 99% certain that this is an overload to Railpower 1300.

They first want me to disconnect all the wires from both the 1370 and 1300, plug them in, turn them on and see if they heat up. They did not, they stayed cool.

The next step to test was to split the AC power supplies between the 1370 and 1300 power packs.

Also that the voltage is the power and the amps are how long it will last before the Circuit Protector power packs kicks in and shuts down. The layout functioned with trains running and all lights on (buildings and signals) and switches working for 3 hours (HOORAY!!!!).

This morning (Saturday), I also added AC2 bus to the 1300 and the layout functioned with no problems for over one hour. Problem solved but with a BUT. I said earlier that the problem was solved FOR
NOW because I felt each power pack and they all were slightly warm, not very warm, not hot but slightly
warm.

I don’t know if that is normal since I had never checked that before until now. I tried using my multimeter but I got crazy numbers. It is a Commercial Electric model #mmm-8301S Multimeter.

The instruction book really didn’t mention how to measure amperage. I am going to read through all your comments again because some of you mentioned that. I am also going on the internet to look up how to use this multimeter to measure amperage output or draw and also call MRC on Monday to ask if the power pack being a little warm is normal.

For now, my major worry (going under the layout looking for a short) did not come to pass; and now I know what to watch out for and what to be aware of if I add more accessories. I am going to get one more power pack AND I just have to become more electrically literate and knowledgeable.

Again, many thanks to you all and especially Alastair for posting my blog and having a site that can bring all of you and all your knowledge together to help one another.

Stay healthy during this pandemic and God Bless you all. 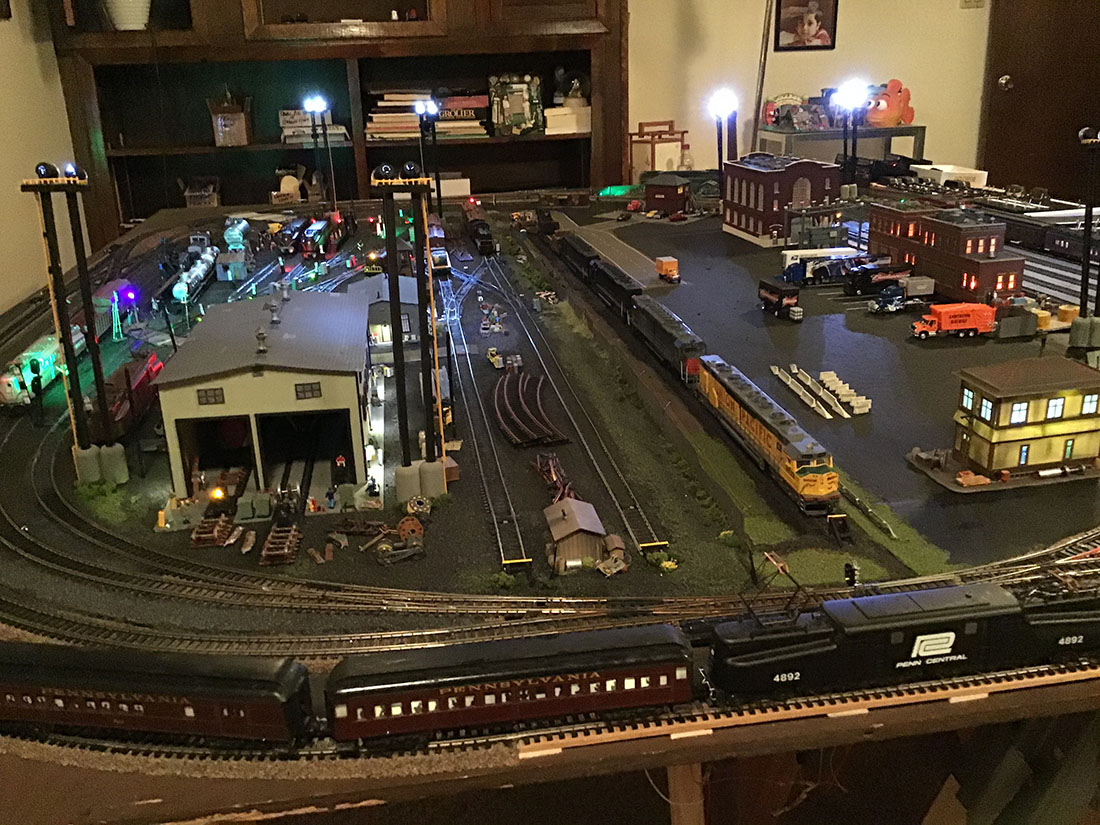 Now on to Jeff.

Last week he sent me this:

I got a #596 American Flyer Water Tank from eBay in good shape ( picture attached).

However, they cut off wires that operate tank water spout and lamp right at the underside of the tank. Can’t get to them.

Do you have any suggestions on how to remove the tank top safely?
Thank you, 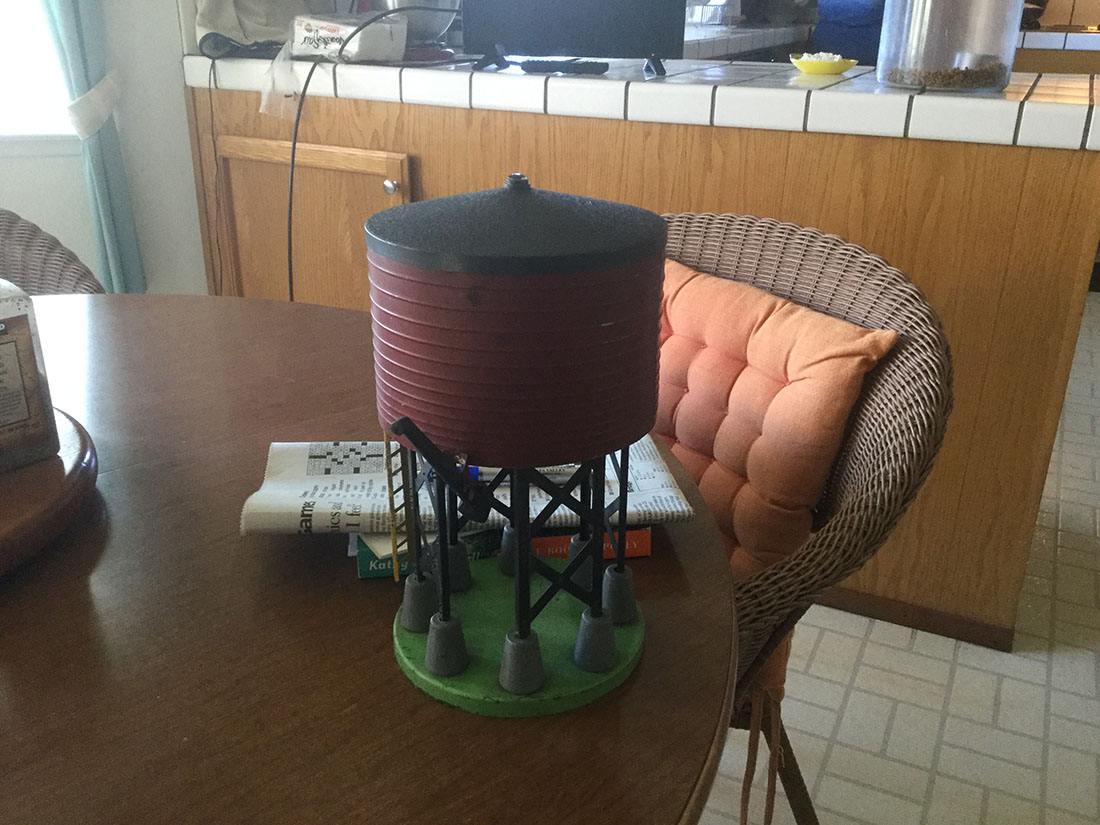 But before I could post, I then received this from Jeff:

Re trying get top off of the tank.

I put a fantastic parts loosener called Kroil Oil, into seam, let it sit upside down for an hour.

I then taped gently around perimeter for 5 minutes with a rubber mallet taping a soft wood block against seam and it popped off, no damage.

“Been working on my kato stations and platforms during lock down.

I have bought and built an extended platfrom. I have grouped all my point switches together o easy on Kato as there is no wiring or soldering to do.

I have bought 5, 3 car units – only 45 pound each. Basic units, no lighting but work well in five different colours. My next task is to have more scenery and extend my elavated track.

I would recommend Kato if you want a quick easy fix for a layout the quality is second to none. 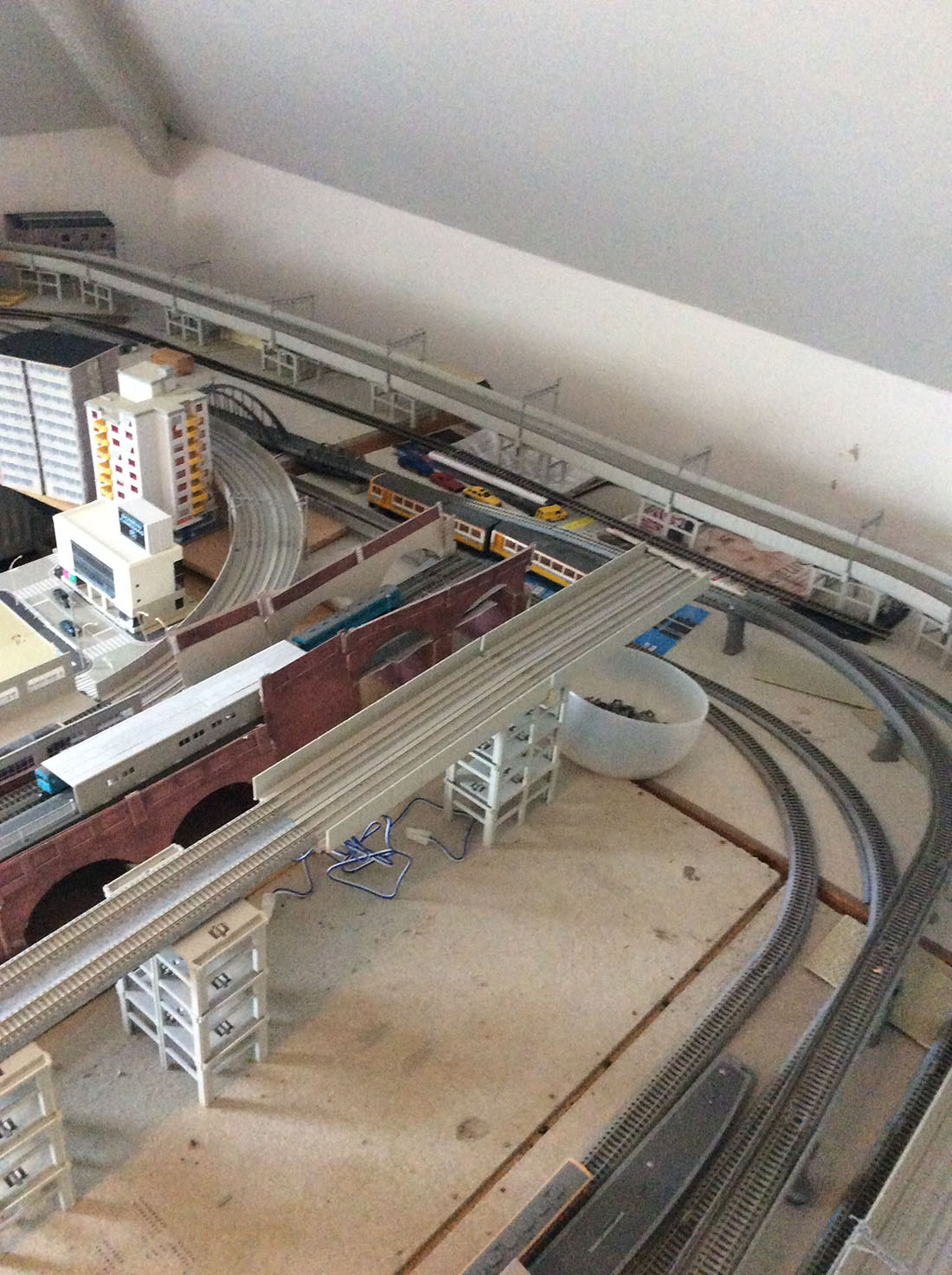 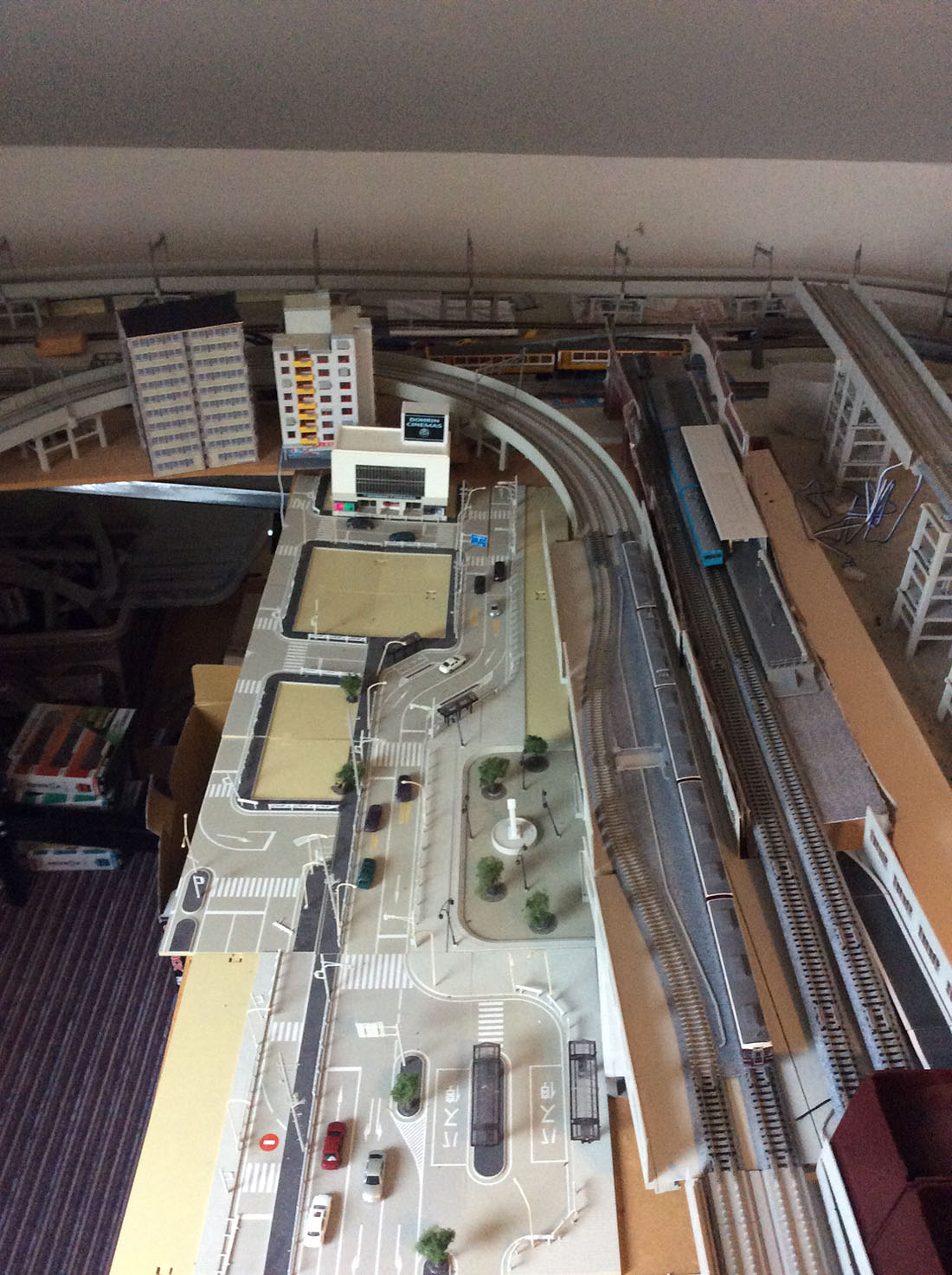 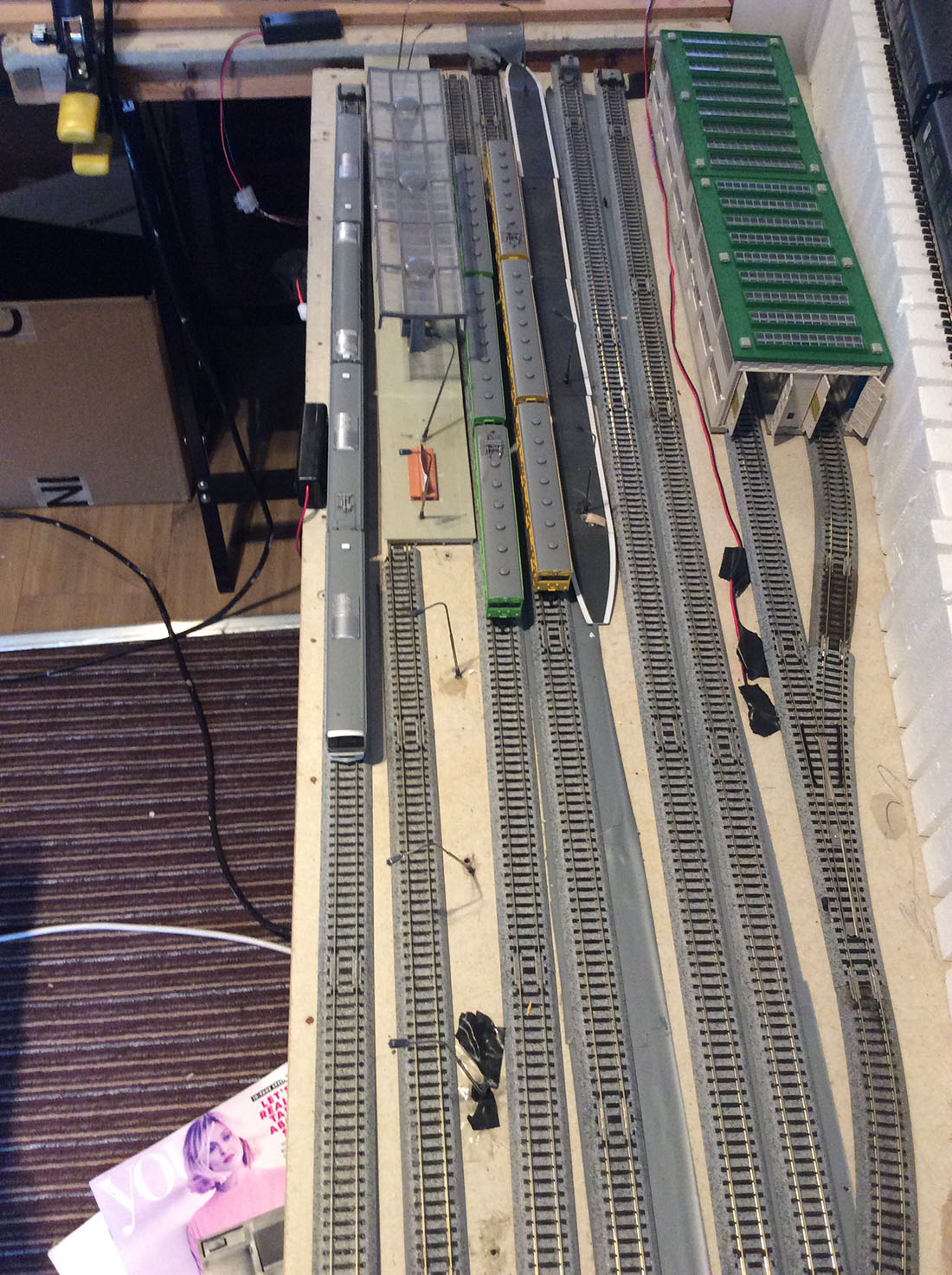 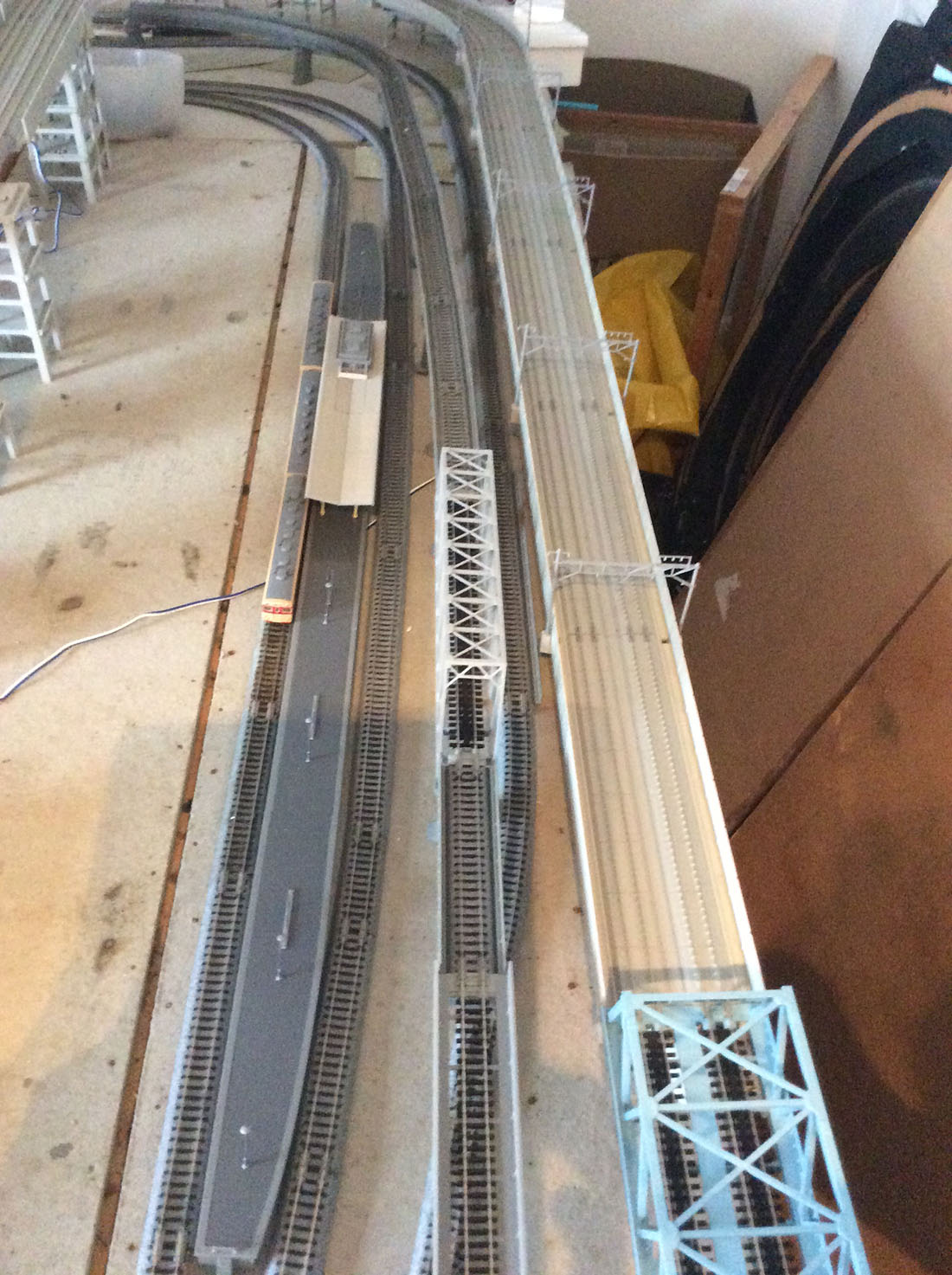 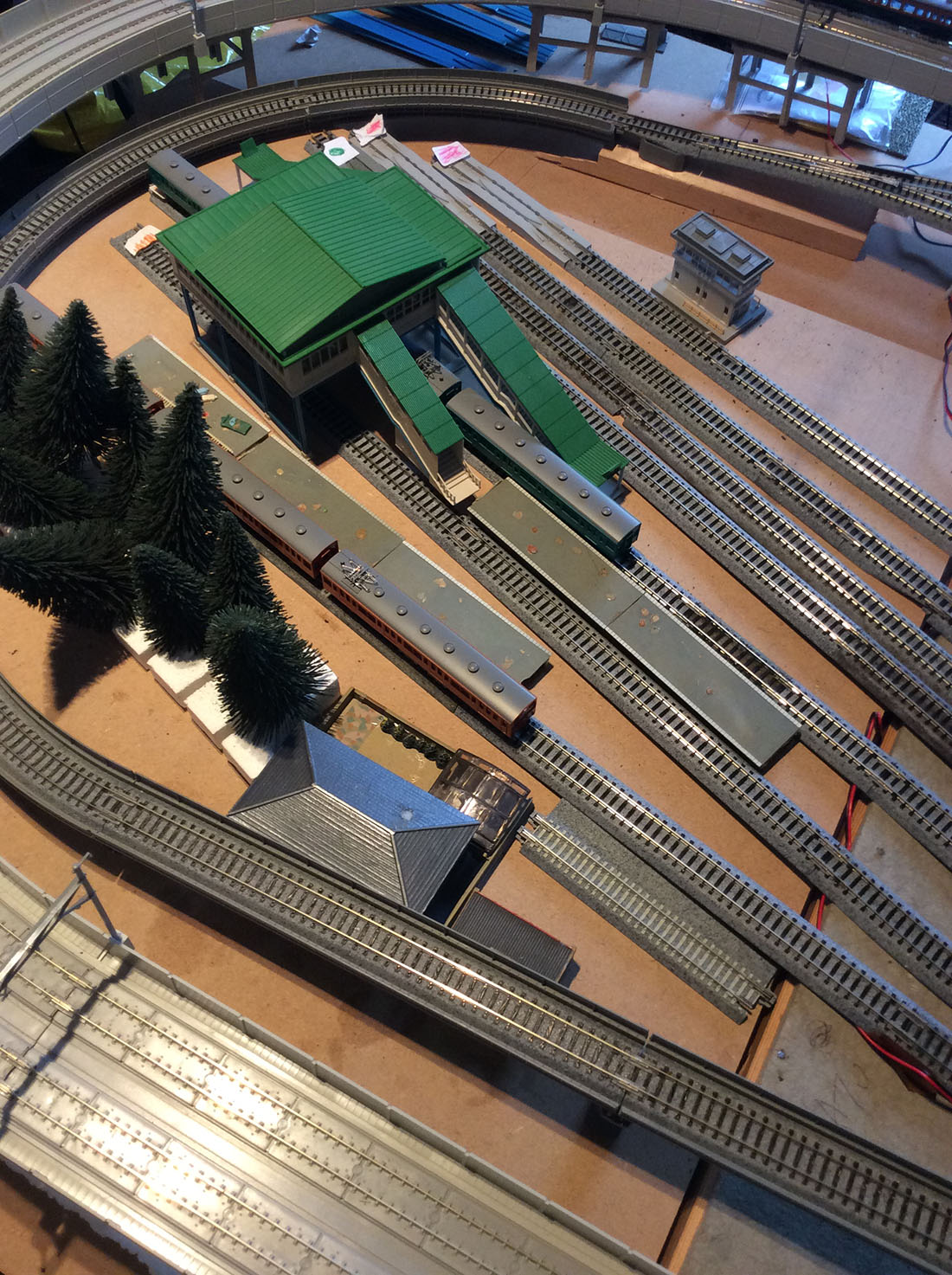 Now on to Jim – who has made a working drive in movie theater:

“This project started with a bit of nostalgia for the old time drive in movie theaters I went to as a child in Tacoma Wa.

We had a huge drive in with the largest screen in North America, called the Starlite.

While I had no room to replicate this, I decided to make a much smaller model that would fit on a future portion of my N-Scale layout.

Starting with a Blair Lines kit for a drive-in, I was inspired to take it further after seeing a tiny Video Player kit.

This little one-inch screen shows fairly high definition videos using miniature electronics. The video files are stored on a micro-SD card, and the whole thing can be powered by either a supplied battery, or USB connection (I chose the later so I would not have to worry about the battery running down).

This soon morphed into a full-blown kit bashed scene with vehicles from Showcase Miniatures, lighting from Miniatronics, fencing with graffiti, scraps from older kits, and lots of patience.

I spliced these together using Adobe Premier Pro and some original music I composed, to create the intro to the feature movie, “Walter’s Last Stand”.

This movie was made by a friend of mine in Arizona, a film maker, and runs about 45 minutes.

After transcoding the output using some software supplied by TinyCircuits.com, I was able to make this work on the module, as shown in the build video that I uploaded to Vimeo.com.

The project took about 6 weeks working evenings on and off. I call this my “Covid project”, as it was something fun to do while sheltering at home.

A big thanks to Gary, Jeff, Alan and Jim.

And don’t forget, The Beginner’s Guide is here if you are tired of dreaming and want to start doing.