Got this in from Glyn on his mountain layout. It’s wonderful:

“Hello Al – I’ve re-started some work on the layout once more, adding the first of a series of mountains to the right hand side of the double mainline. It’s been an awkward reach but I’m managing to get it done piecemeal. I should have done this at the beginning of construction but as you may recall I decided to add an entire double mainline loop to the back end of the layout just a couple of months ago, necessitating the additional landscaping as an after thought. Hindsight is 20:20! I hope it will be helpful to some of your viewers.

I’ve been swamped with work but have started working on the layout once more after finishing the Bietschtal bridge project I sent in earlier. Since the bridge installation I added railings around the bridge approaches shown below. 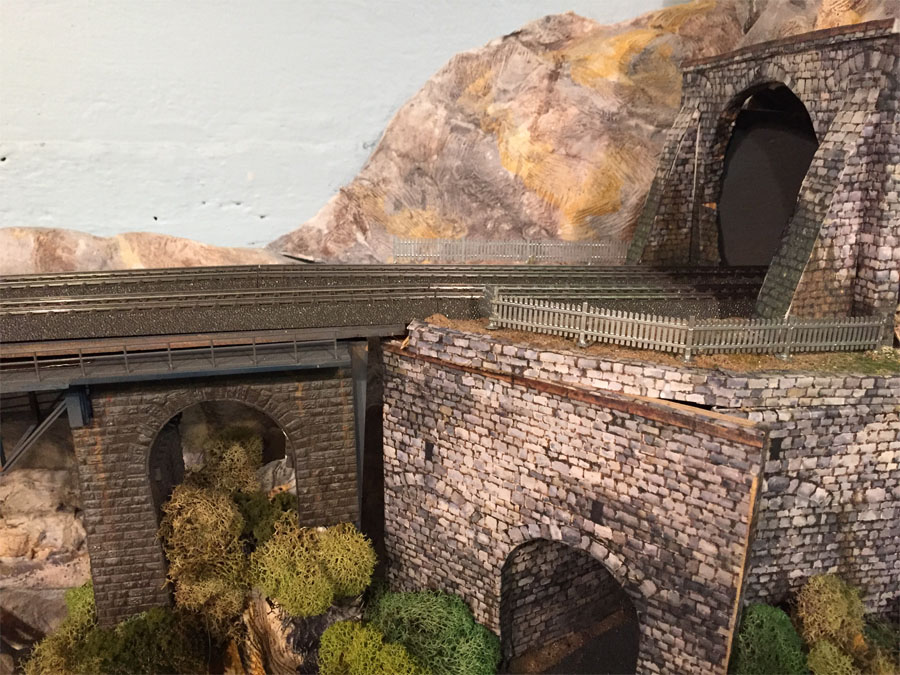 With the tunnel portals made I started on framing up the mountain to the right of the bridge. I wanted a fairly high peak tapering gently down toward low hills which would be the backdrop of a smaller town on the right limb of the layouts E-shape. I made a rough wooden frame out of wood off-cuts – not much to look at but it was sturdy enough to support the use of Woodland Scenics shaper sheet. 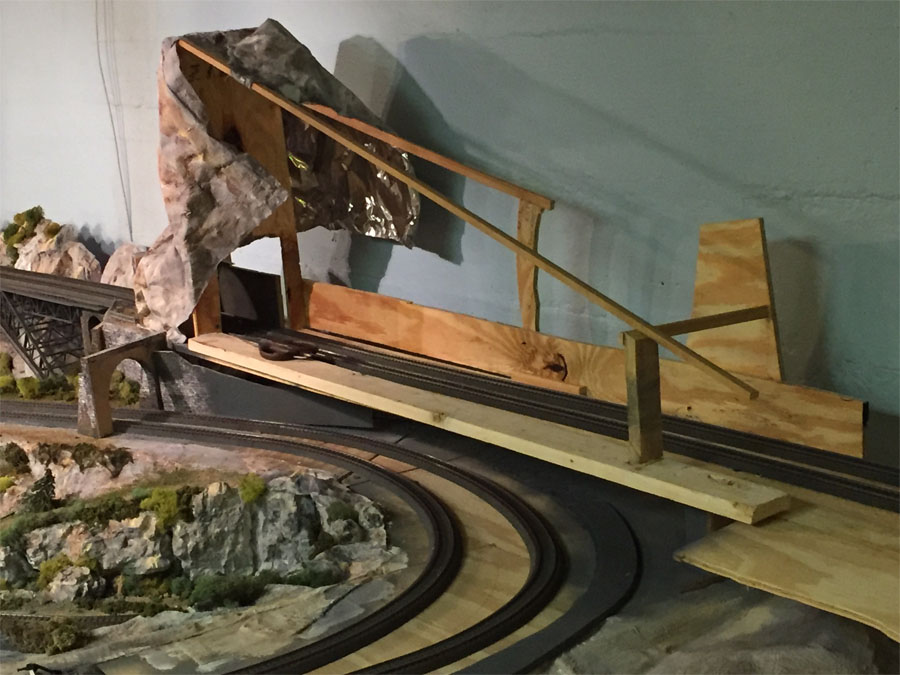 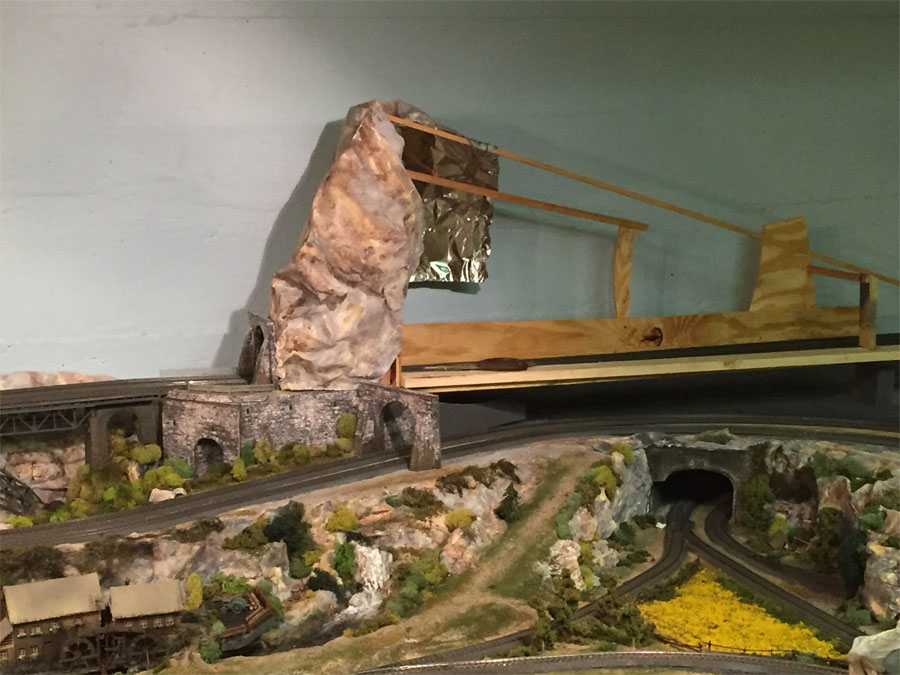 With the face of the mountain stapled on to the frame I began covering the entire structure, making allowance for the tunnel portals. The idea was to construct a mountain that could be easily lifted off the layout in case of derailment or for track maintenance problems etc 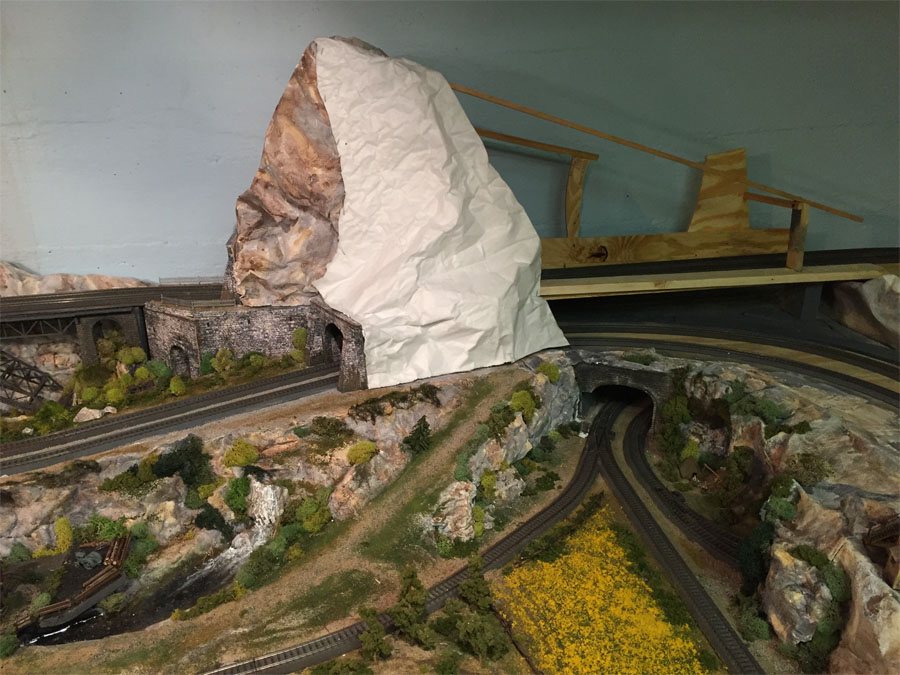 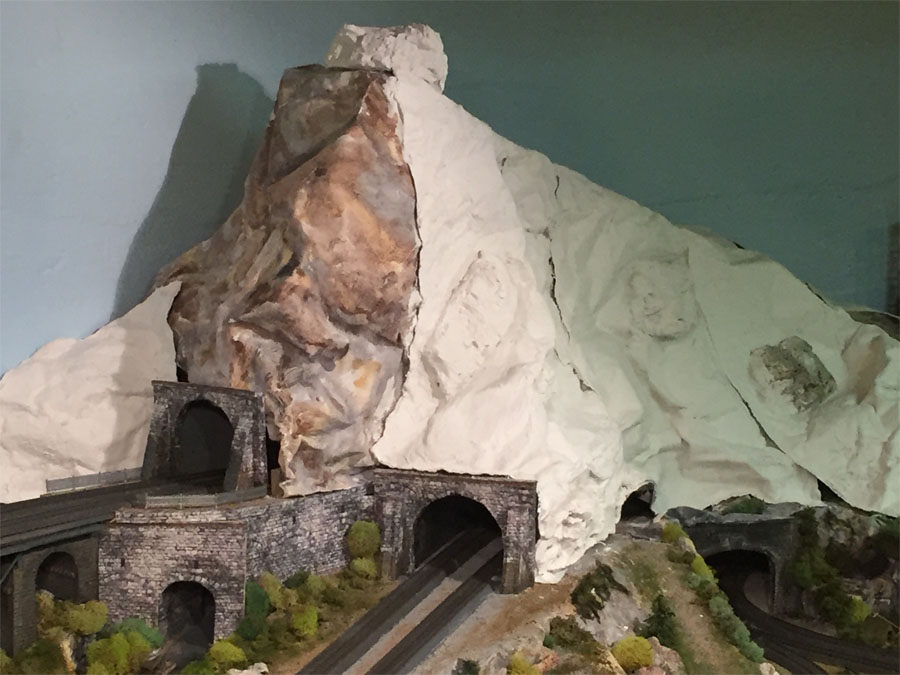 Next came the plastering shown above and once that had dried I started to paint the shell using the Woodland Scenics leopard spotting approach with burnt umber, yellow ochre and Paynes Gray/black acrylic washes. The initial result with this technique (shown below) is always a little garish but as it dries, the colours fade and become quite realistic. 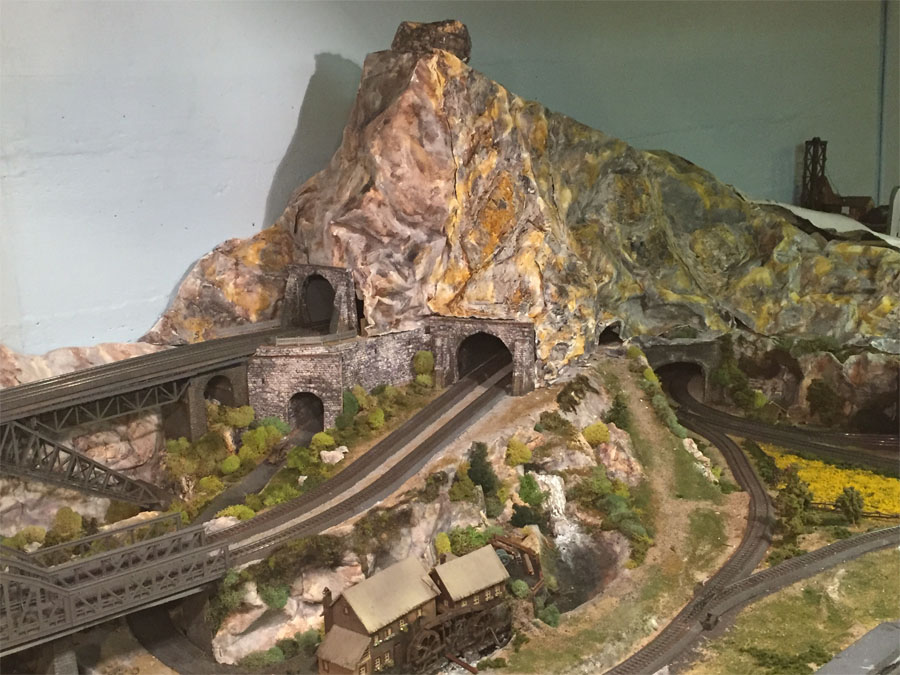 Next I started adding areas of light grass flocking and small bushes using lichen. I also made an attempt at constructing a tall pine tree using Luke Towan’s technique using BBQ skewers with coconut fiber rings to create the framework for the flocking. He has a superb YouTube video describing the technique and achieves amazing results at a fraction of the cost of buying ready made trees. 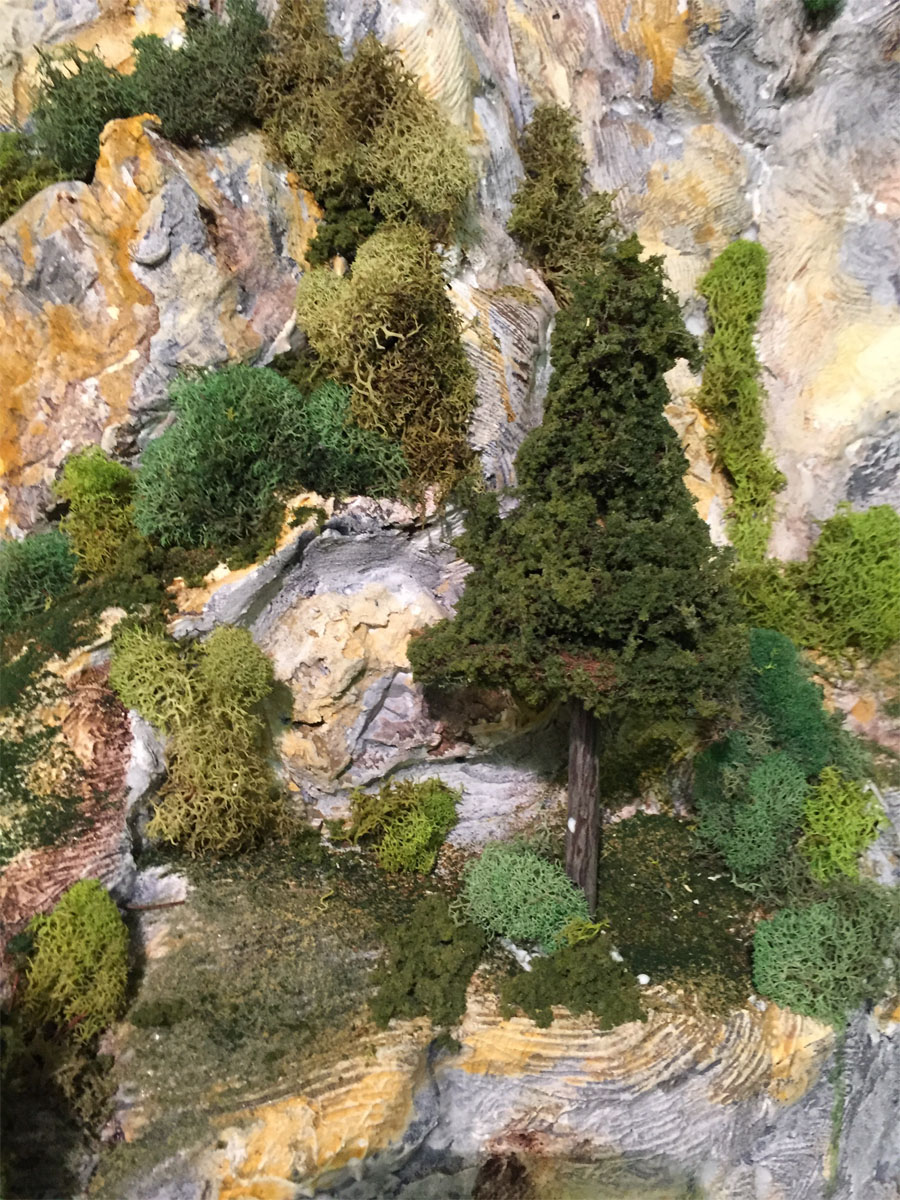 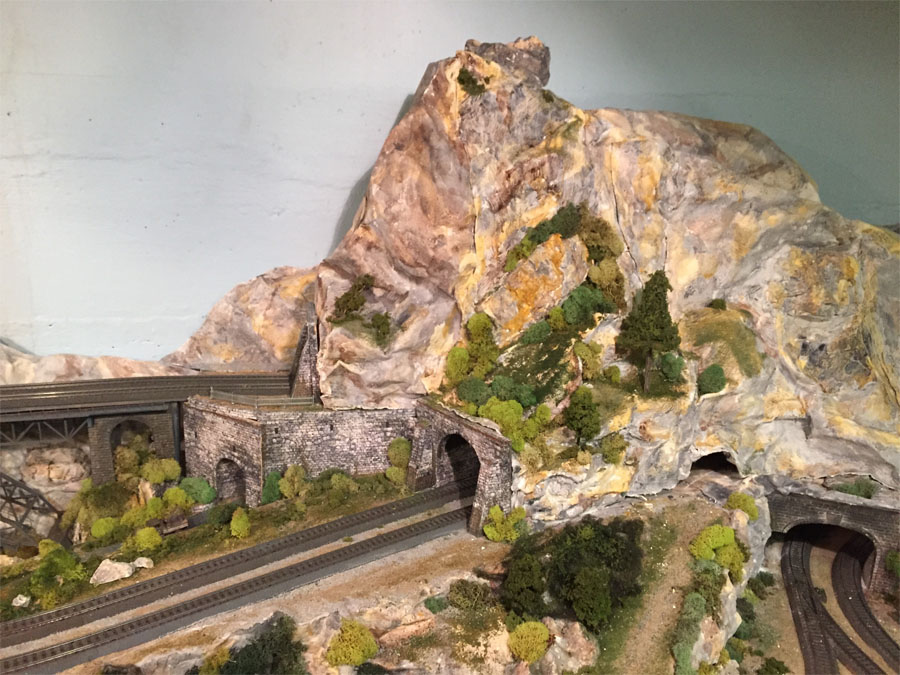 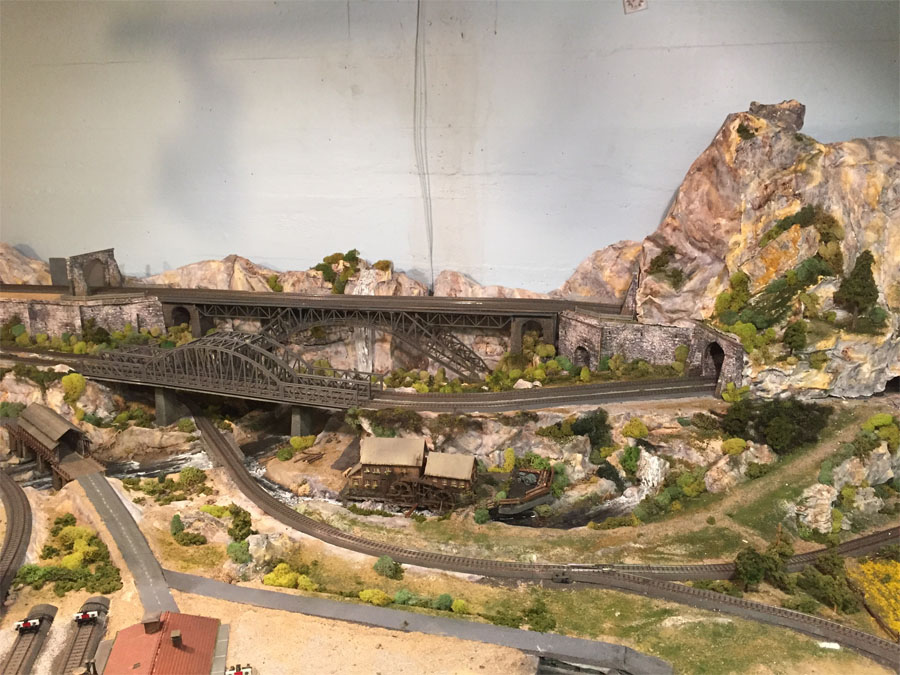 The effect was fairly pleasing so I began to add electrostatic grass to the softer shoulders of the mountain and then added more trees, both deciduous and conifers. I also added anther smaller summit to the main mountain as I didn’t like the angular profile of the original construct. I had added some vines along the edges of the precipice but found that too dark and unrealistic so off it came. This is before I removed the vines. 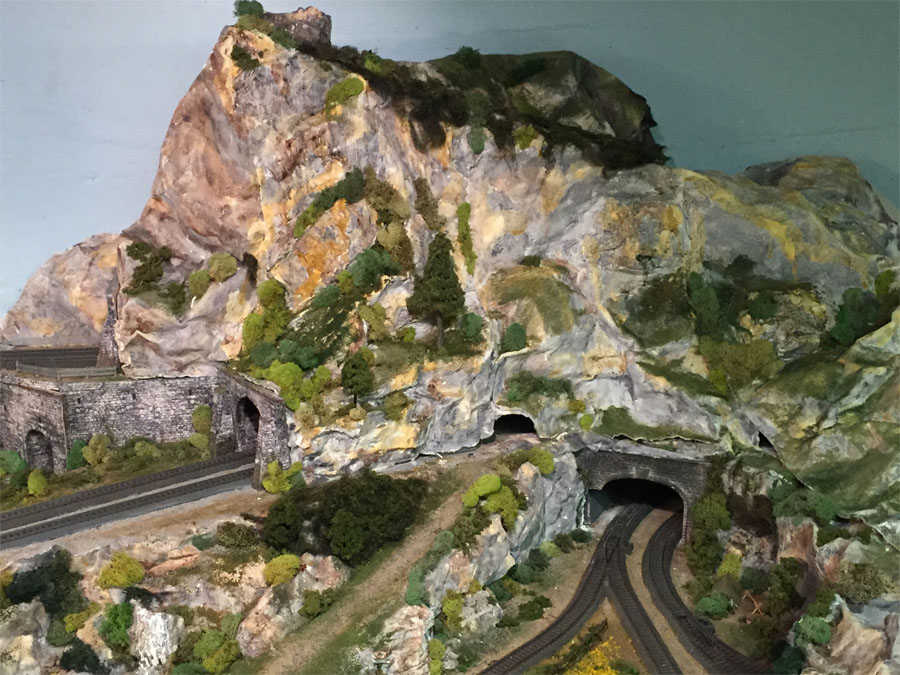 With some of the vines removed I added more trees and electrostatic grass. 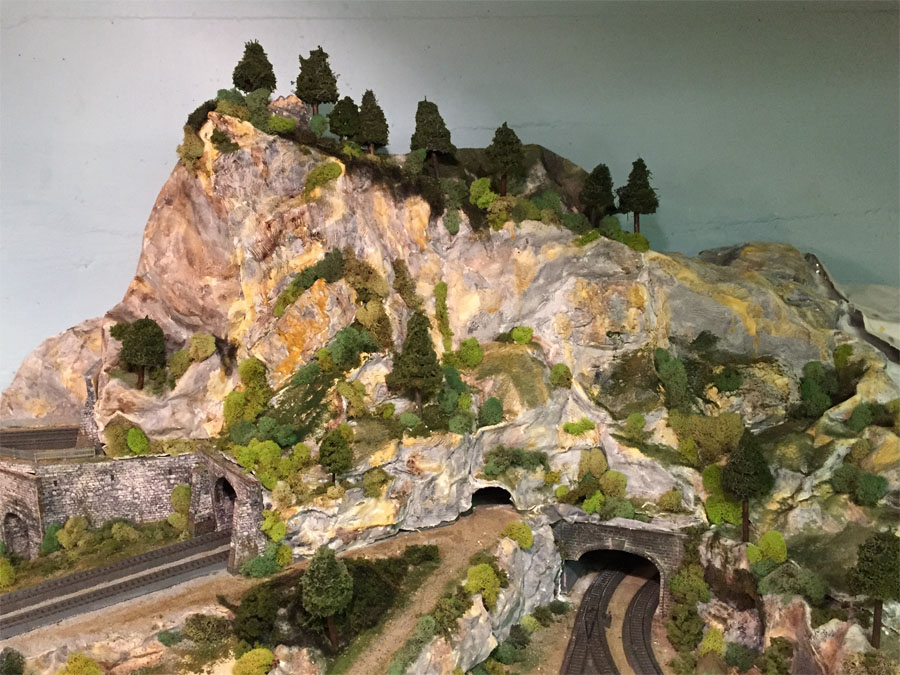 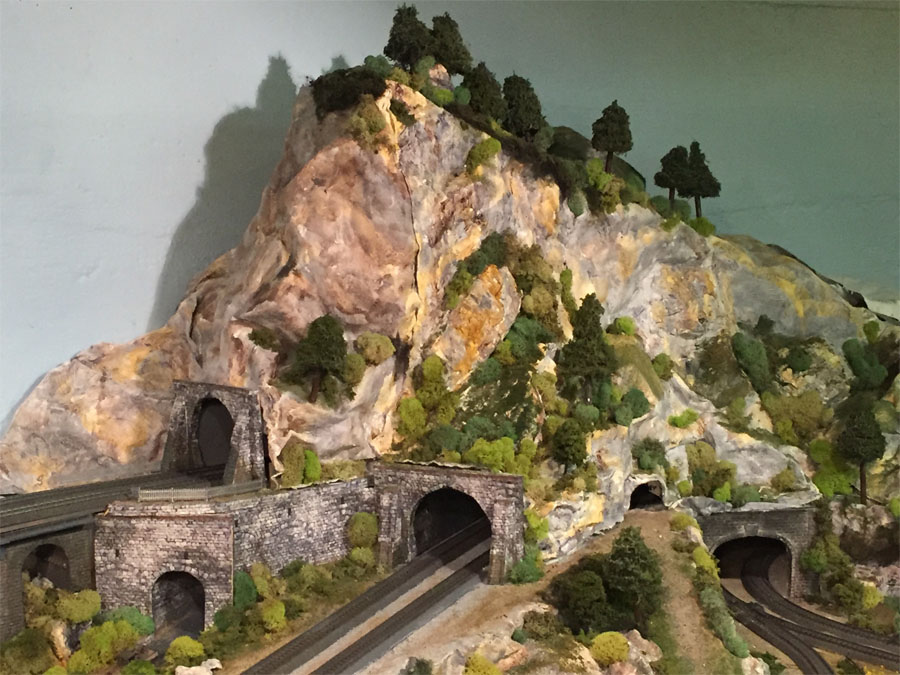 The final result is fairly pleasing at this stage but I plan to add more trees and bushes to the main mountain as well as to the smaller outcrop to the left of the tunnel portal. I will also have to camouflage the junctures between the portals and the mountainsides and add a tunnel portal for the logging road at its base. Then it’s on to building more mountains to the left of the Bietschtal bridge! And so it goes on!! I’ll send some video once I have it edited.

Well what can I say? I stunning ‘how to’ – and I think it looks amazing.

And if Glyn has left you feeling inspired – the Beginner’s Guide is here.

That’s all this time folks. Hope you enjoyed this one as much as me.

PPS Finally got my head around facebook, so if you want to make me very happy and like my page, it’s here