Glyn’s railroad bridge ‘how to’

Glyn has been in touch again and left me speechless. It’s not hard to see why.

I hope you enjoy this as much as I did. All images are clickable by the way.

“Hi Al – I’ve been traveling a lot lately but was awaiting the arrival of my Faller kit of the Bietschtal bridge to complete the double main line addition to the back of my layout.

The tracks crossed my river-waterfall feature at a higher level and I needed  the 43″ span of this bridge to make the project work.

It finally arrived and I spent most of last weekend building this highly detailed kit 43″ long and 15” high.

I also needed to re-route my logging road through a side tunnel alongside the ravine so, inspired by John’s amazing use of your stone wall printout, embarked on a scratch built tunnel portal replete with curved stone abutment at the entrance to add some character.

That printout is amazing and probably the best piece of modeling landscape material I’ve ever purchased – truly incredible what you can do with it and a little imagination!

So here goes with the project step by step.

The support spans were built first – incredibly tedious as the catwalks have to be constructed within the bridge spans after everything has been assembled, the handrails being the worst part. 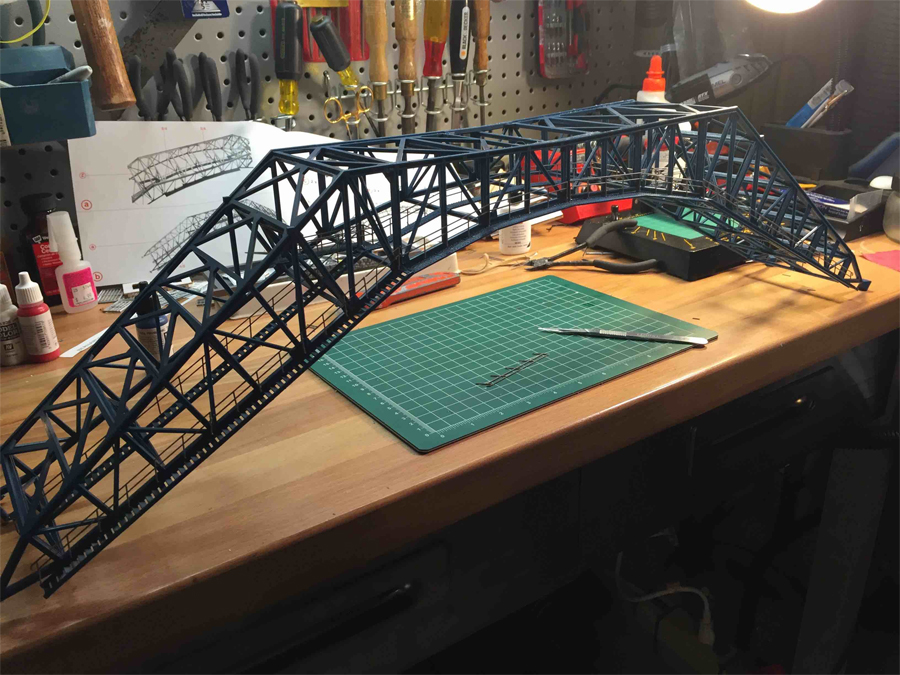 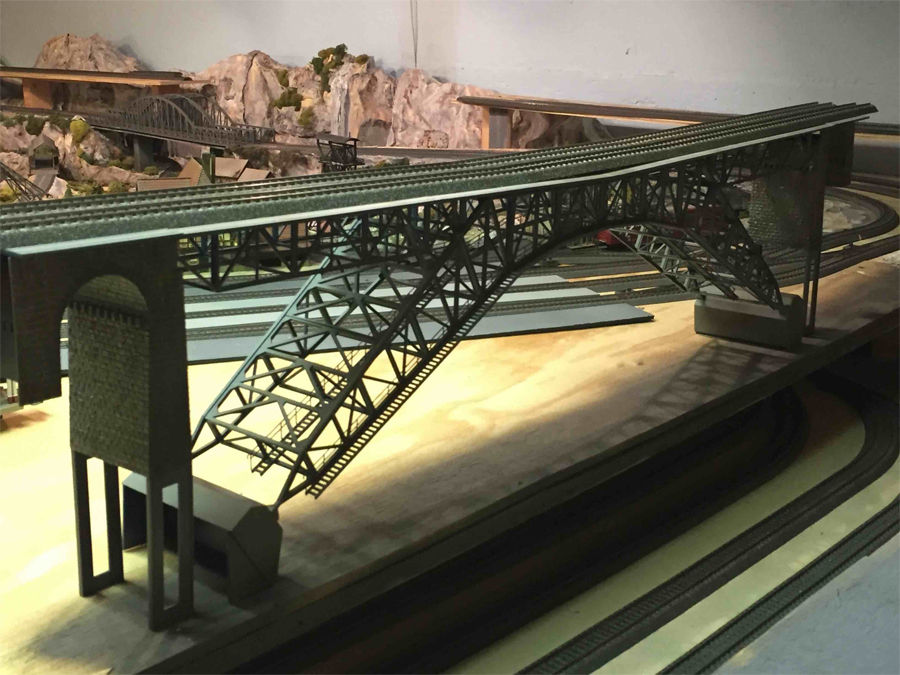 The stone arch supports added – these were a strange beige colour and not very realistic so I sprayed them and the bridge with gray acrylic primer then weathered the stone. The centre of the bridge sagged a little without appropriate tensioning of the support stanchions so I built a wooden frame to stabilize everything. Being 43” long this bends easily when lifted! 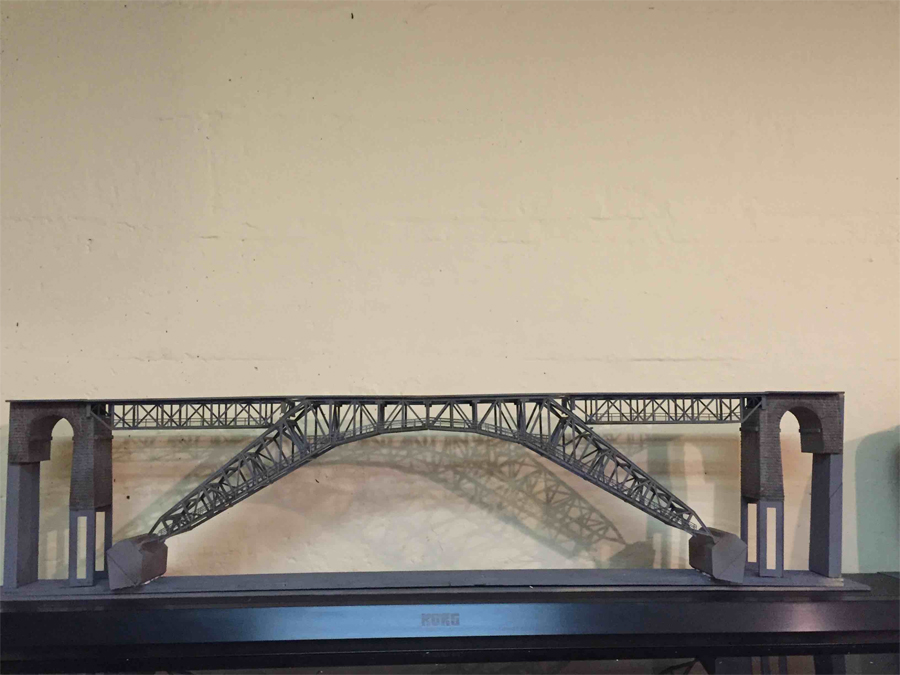 The support spans with their concrete bases were reinforced with transverse pine blockes glued to the horizontal wooden base at a point where they would provide vertical tension on the main bridge deck to prevent sagging as in real life. That worked pretty well and leveled the deck nicely.

Then it was time for a trial fit into the river’s ravine. I added some styrofoam between the stone portal arches as a prelude to wrapping with Woodland Scenics shaper sheet for landscaping.

Then it was time to lower the bridge construct into the ravine for a trial fit. 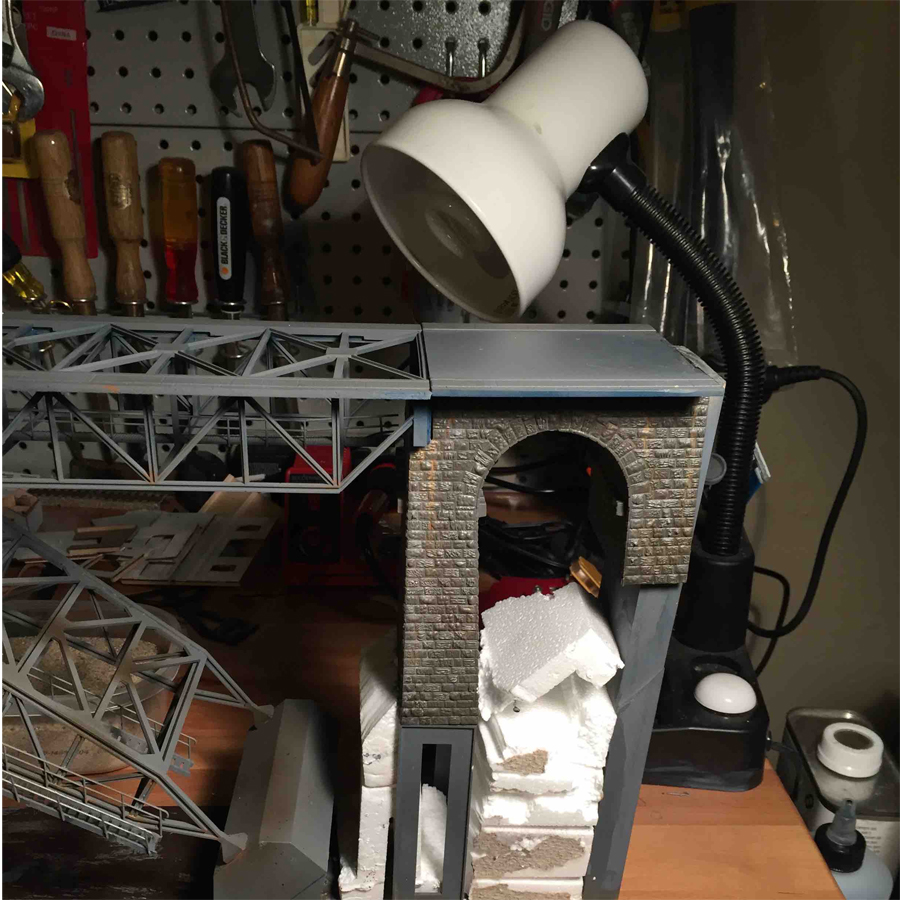 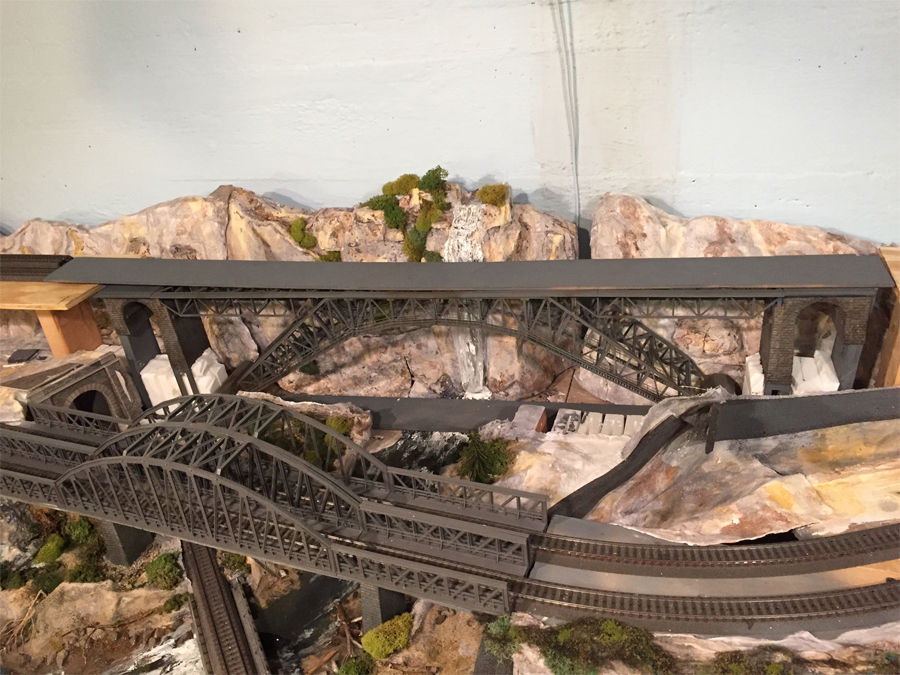 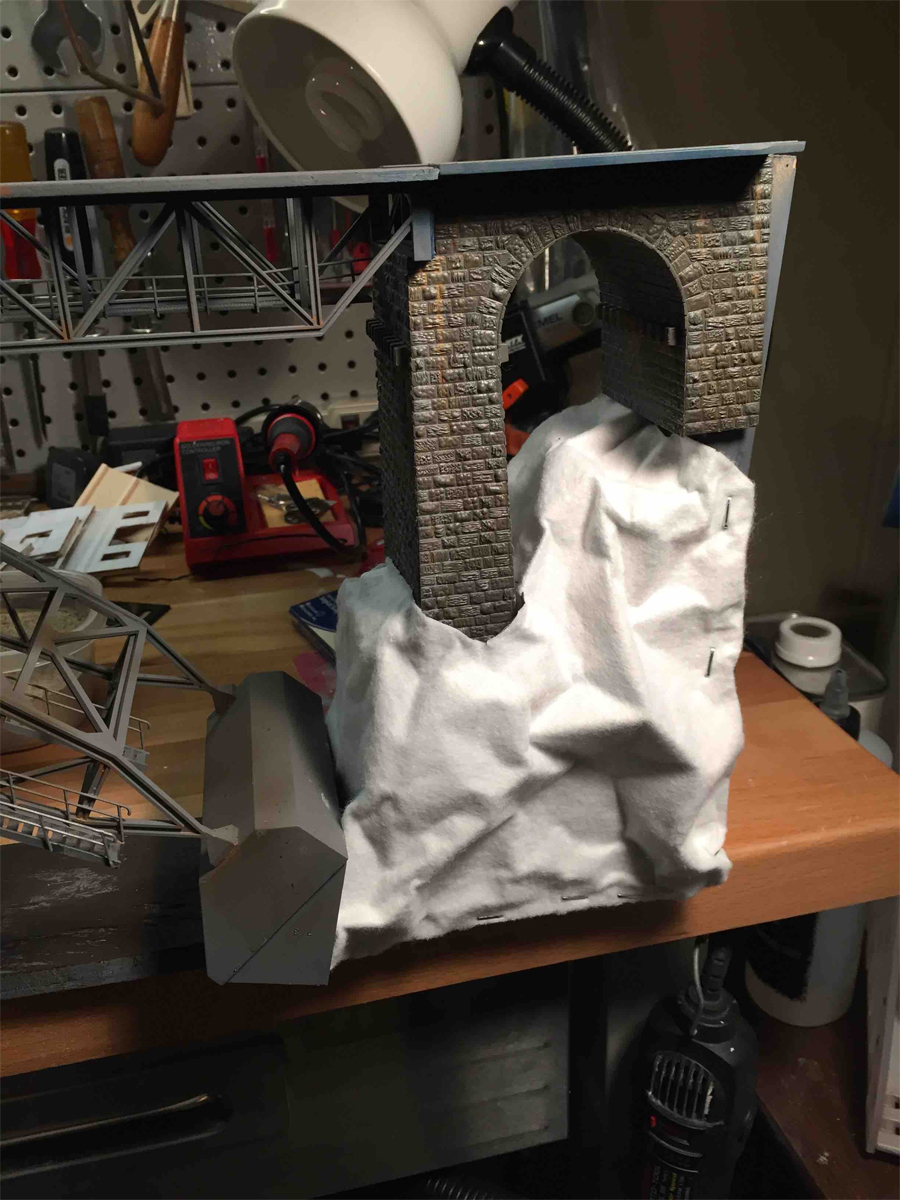 Back out we came and I started the landscaping by wrapping the vertical supports and styrofoam with Woodland scenics shaper sheet. This stuff is amazing – so easy to use, no mess and it can be moulded and bent into shape and re-worked until you are happy.Then I stapled it firmly to the wooden frame inpreparation for plastering and painting using the leopard spotting technique described by Woodland scenics.

I’d marked where the river flowed underneath and started laying down river boulders and sandbanks. Then I leopard spotted the plastered shaper sheet with yellow ochre, burnt umber and Payne’s grey acrylic wash, let it dry and added clumps of colored lichen for bushes and undergrowth using a glue gun. 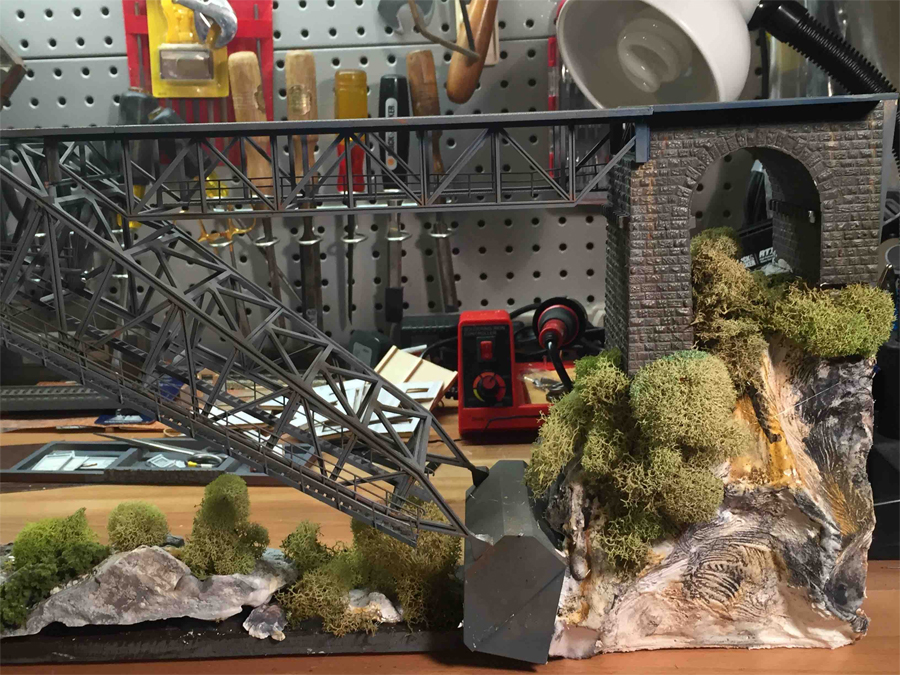 Close-up of the weathered base evolving. 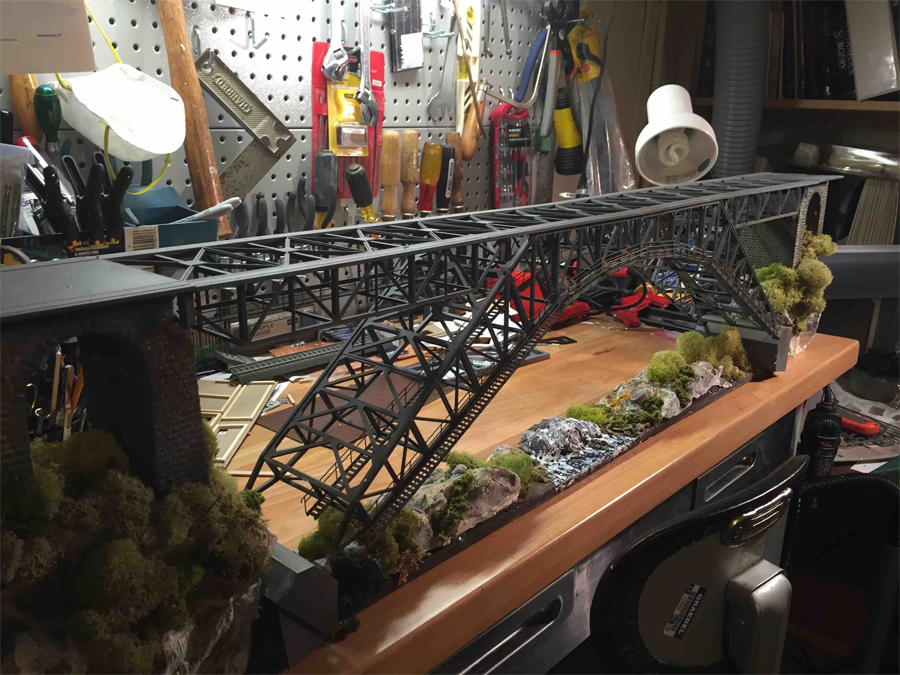 The entire bridge on the workbench. Plaster moulded rocks were added and painted, slowly building up the scene and rapids were painted in with acrylic water texture paste and white acrylic paint.Next came another trial fit. This was the empty gap between the track ends: 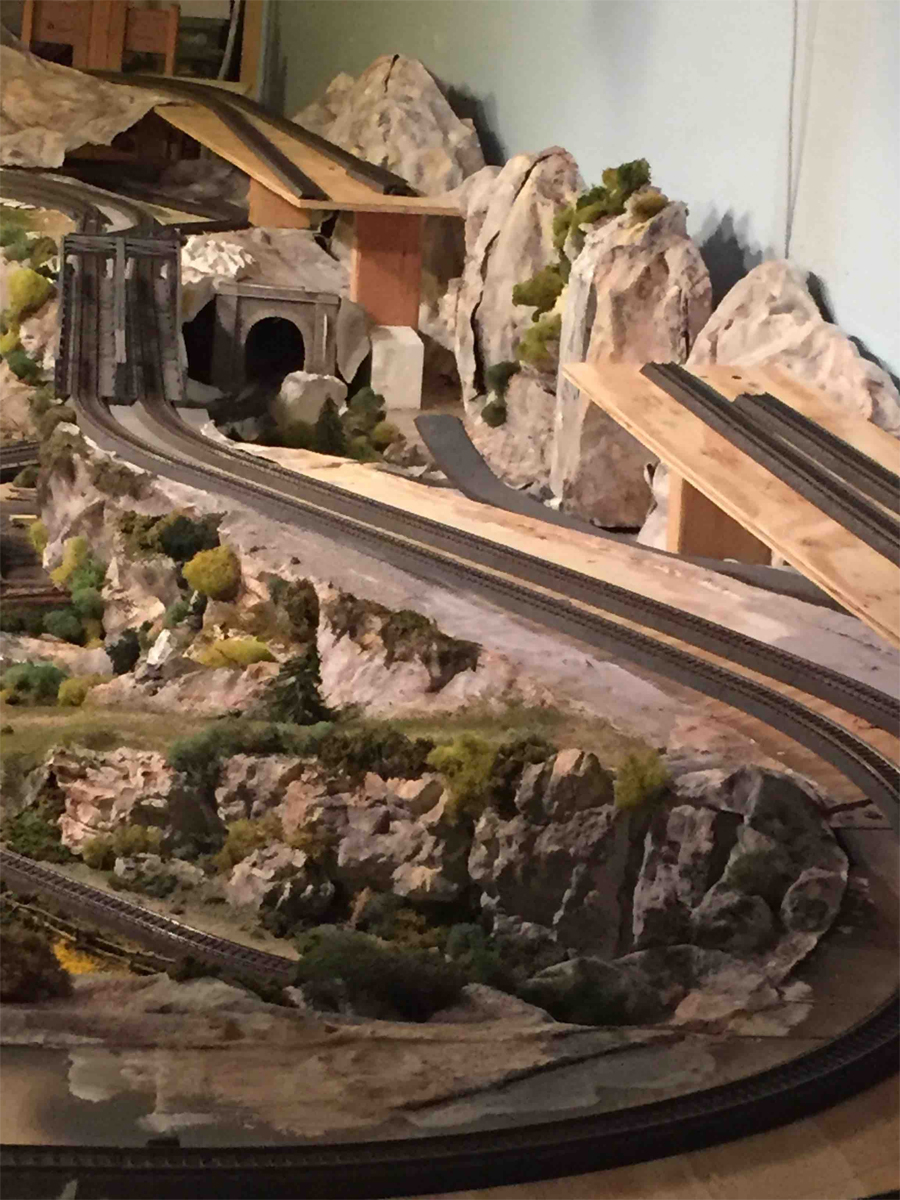 I needed to make sure the added landscaping did not impede my ability to seat the bridge within the fixed endpoints of the ravine –thankfully it fitted in perfectly. 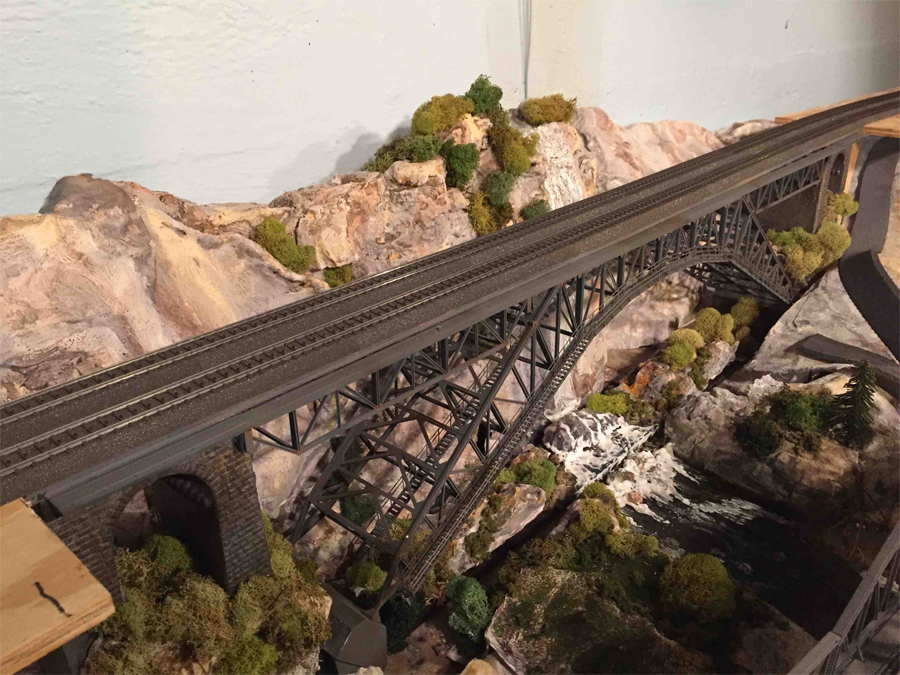 So now I had the basic bridge construct landscpaed, I needed to add the decking and handrails along the main pedestrian catwalks, out it came again for the handrails to be added. 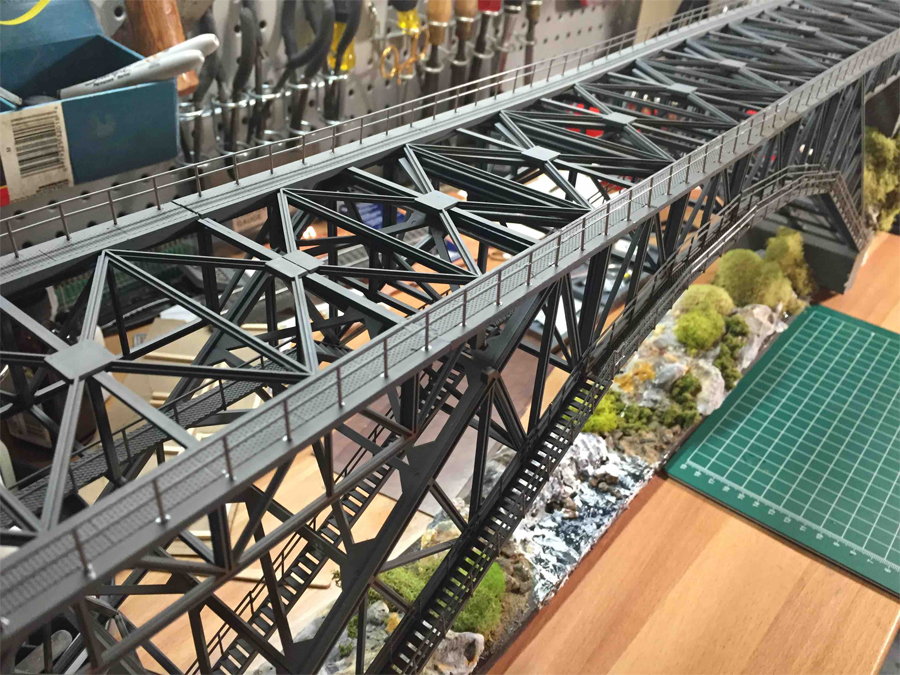 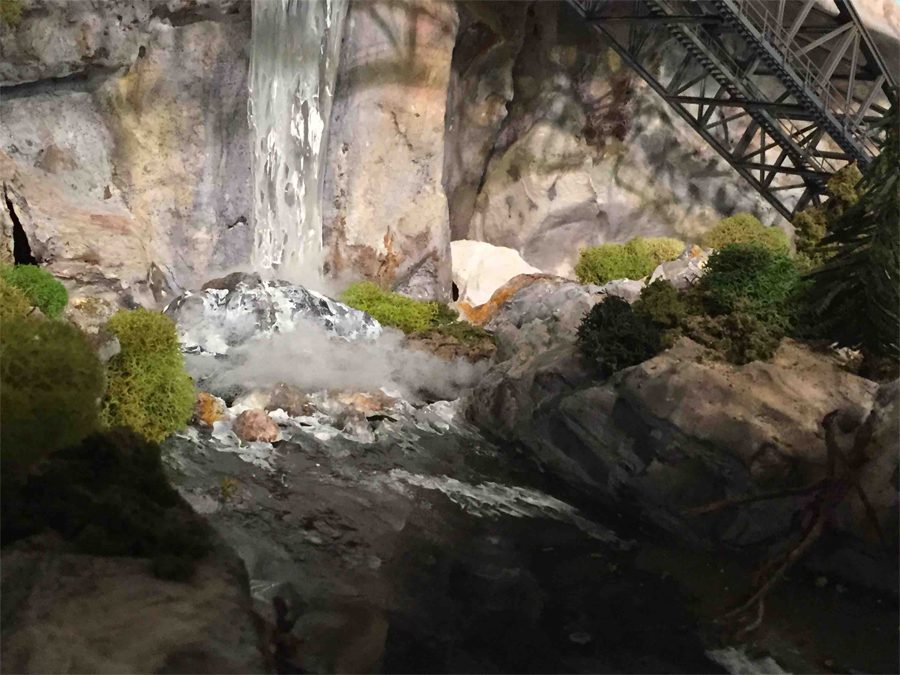 Next, I lifted the old logging company road and changed its direction to run alingside the newly fashioned ravine edge, together with a quick re-do of the landscaping – playground sand, various woodland scenics turf colours, undergrowth and bushes. 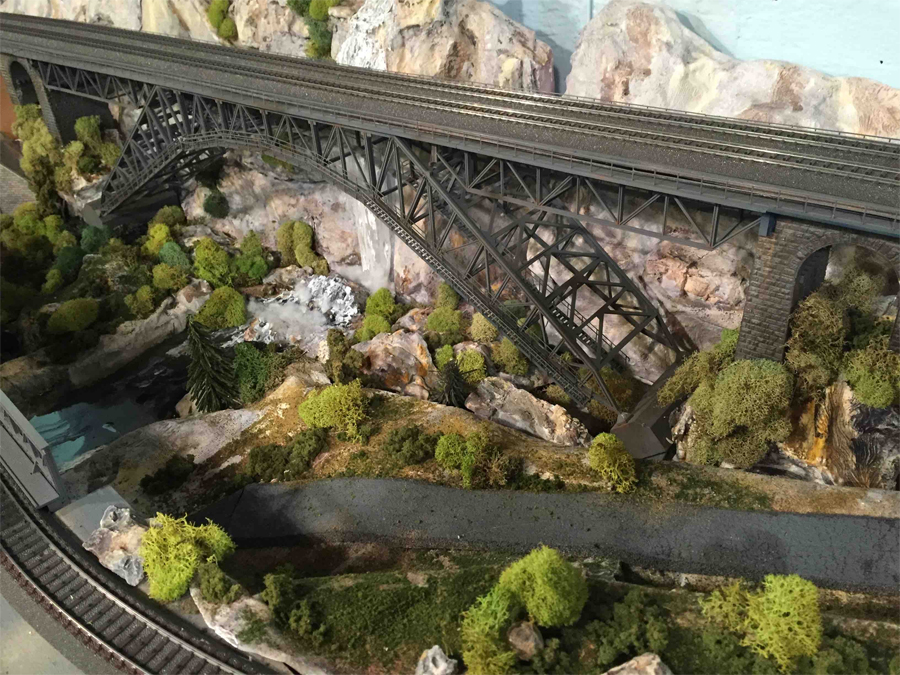 That all worked out well but I needed a scratch-built tunnel portal where the logging road passes through the mountains to my next town, which has yet to materialize on the right hand side of the layout! So I measured and cut out a tunnel portal from a plywood off-cut, coated it with PVA glue. 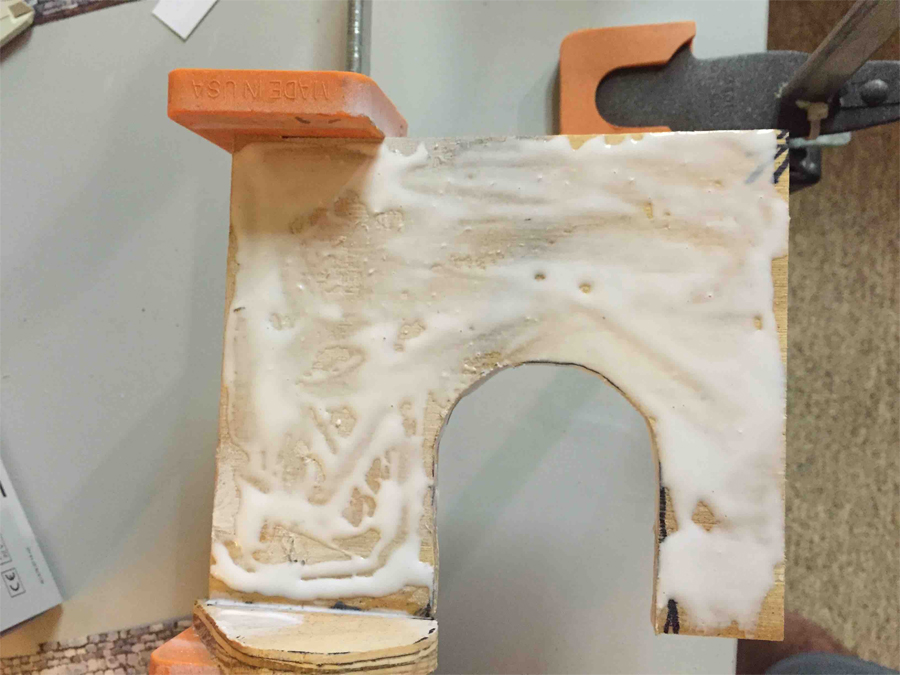 Then I pasted on the stone wall printout from your website, cut to size and adapted as John described using bits and pieced glued together to make it look confluent, 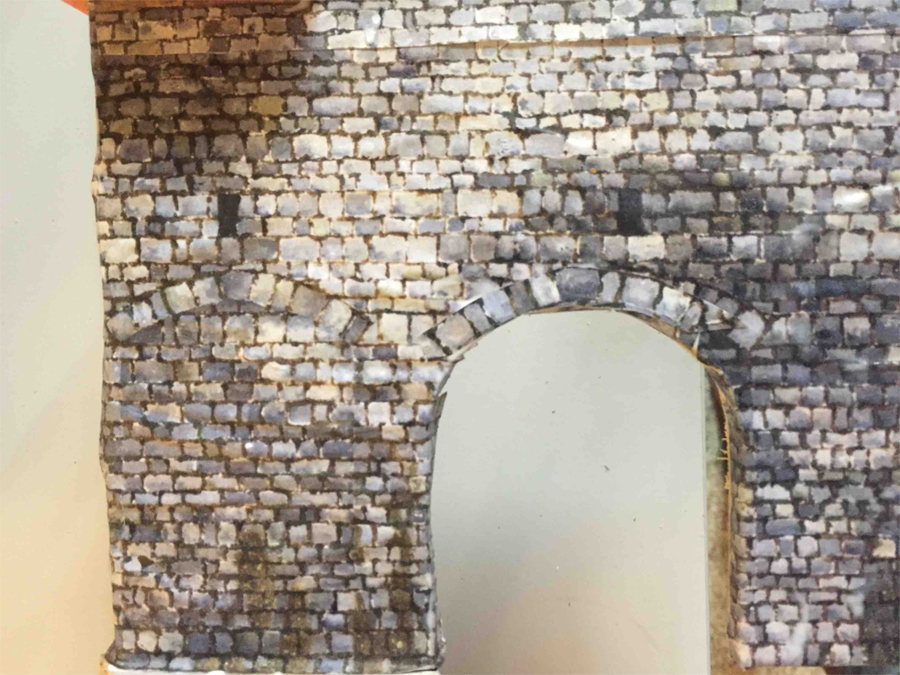 I bent the excess over the edges of the insides of the tunnel entrance to give the 3-D appearance that John describes. 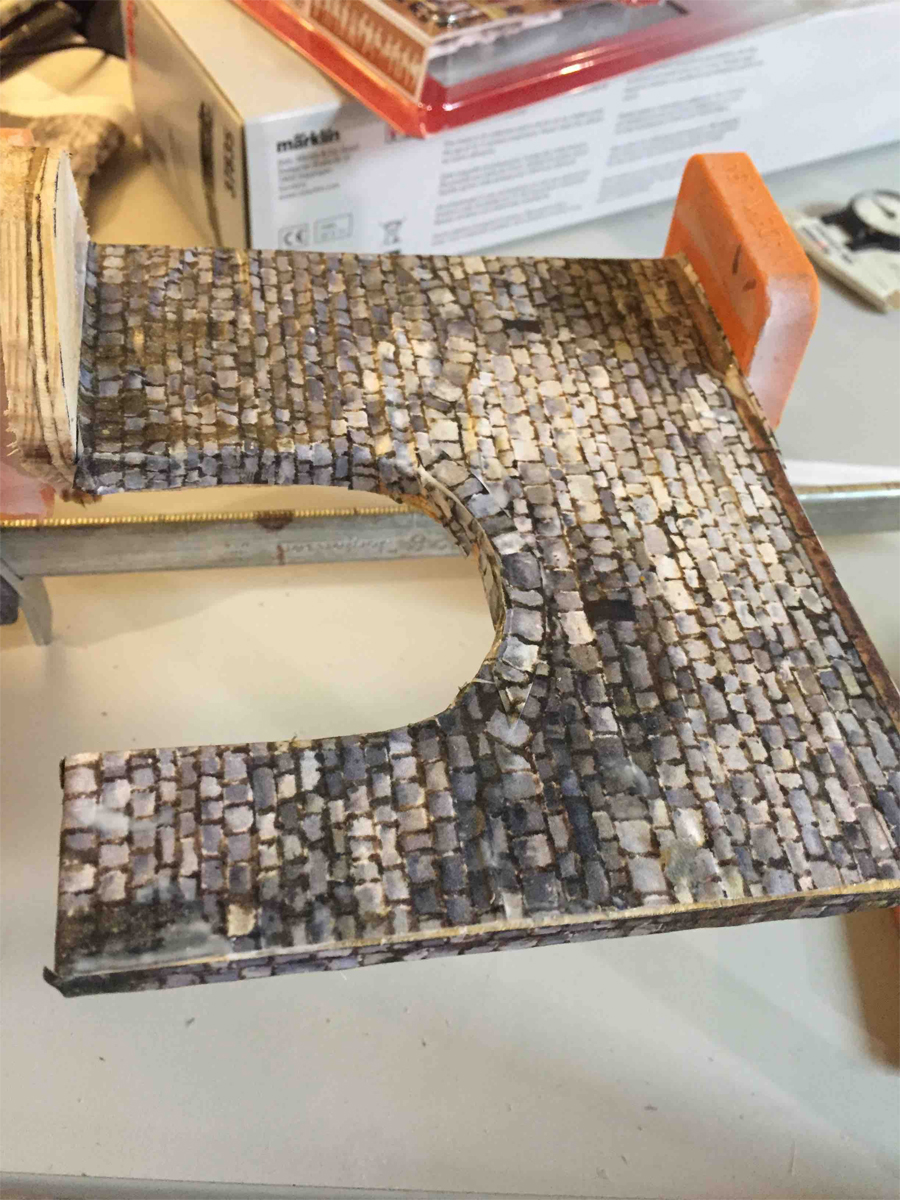 I needed a little extra support on one side so, for added interest , I added a curved support base as a bulwark and pasted a strip of wallpaper to give the appearance of a curved abutment. 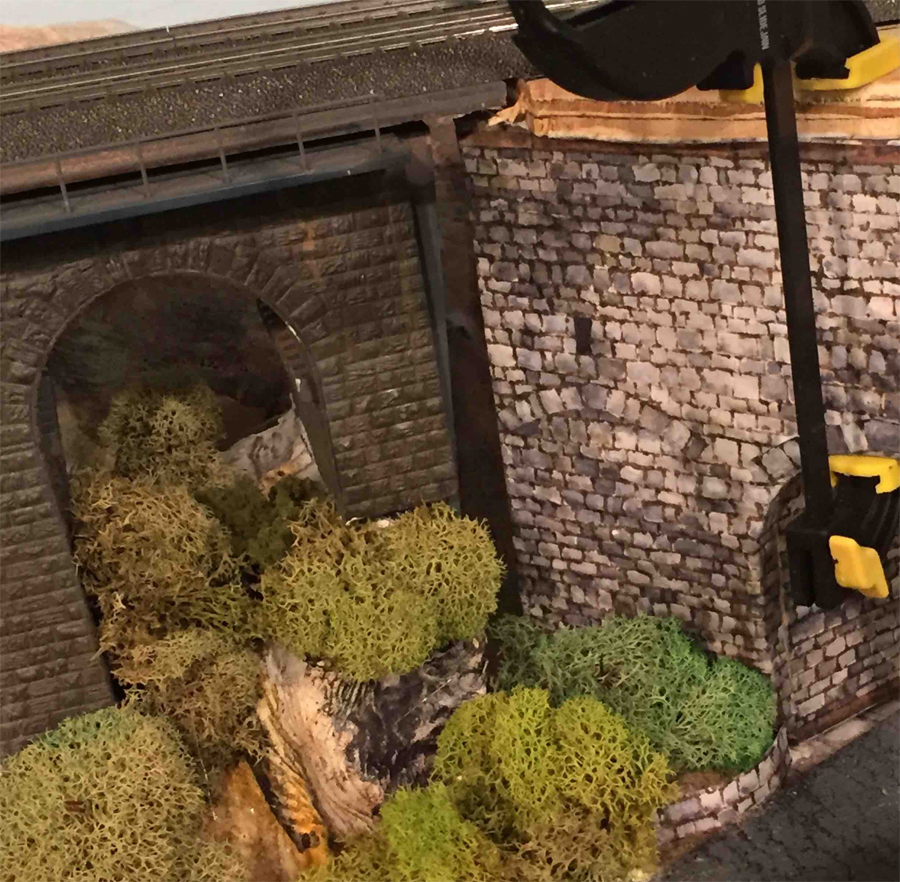 Then I sprinkled on some sand and glued bushes and foliage before gluing it in place and clamping it on. I used another piece of waste plywood covered in paper printout to achieve the interior tunnel wall appearance. So here is a close up of the tunnel entrance. 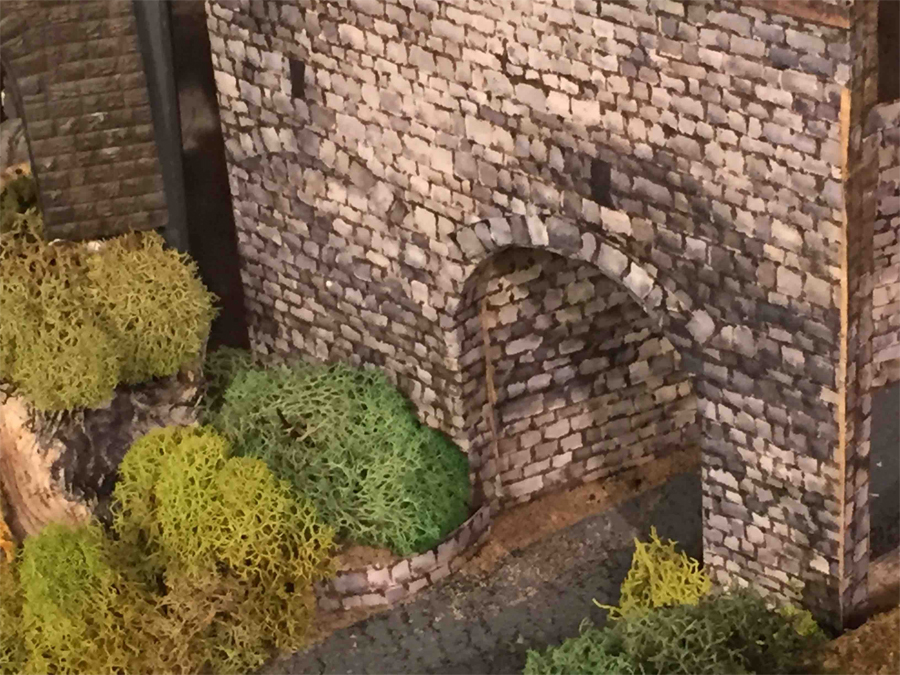 And here is the final bridge inset showing the overall effect with all the bridges spanning my waterfall /river feature. 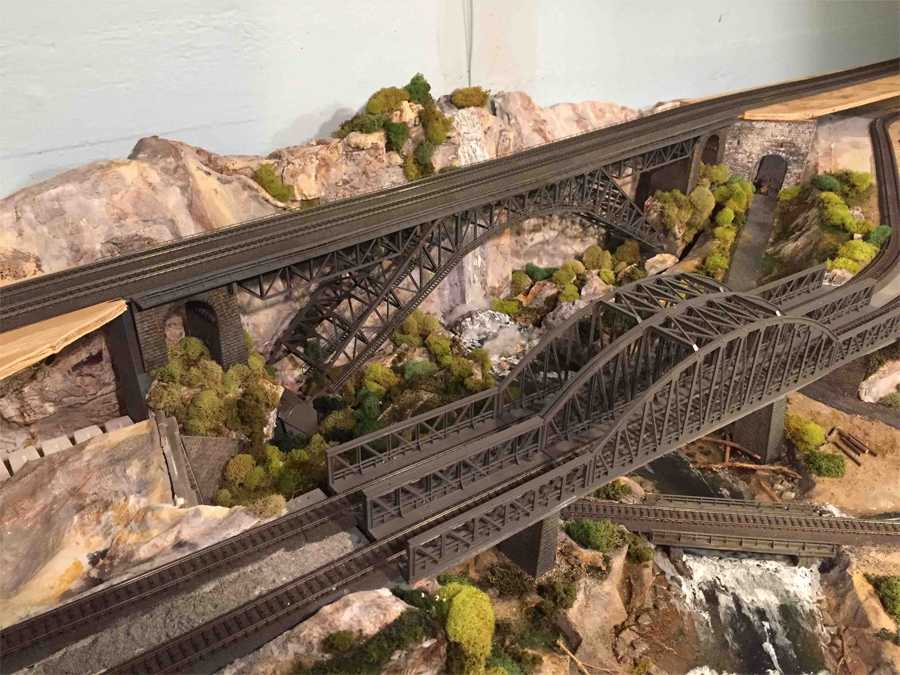 Quite a deamnding piece opf medling but well worth the effort and it was tremendous fun getting it all done. Now I have to start building the mountains over the double mainline tracks and set up my backdrop (which should have been done first!).

Well, what can I say? An absolutely stunning ‘how to’ from Glyn, on his stunning layout.

But it gets better, this is just part 1 of Glyn’s narrative – so there’s more to follow next time.

A HUGE thanks to Glyn for taking the time and effort to put this together. I can’t thank him enough.

I absolutely love what he’s done with the printable buildings.

And if it’s inspired you, the Beginner’s Guide is here.

55 Responses to Glyn’s railroad bridge ‘how to’