Some of you will remember Rob’s Farland Howe layout. He’s been featured quite a few times on the site, and with good reason too.

And this time is no exception. In fact, I think this is his best video, because it shows how you’ve just got to roll your sleeves up and get stuck in to your layout:

Your readers always are interested in track plans so I have attached one. It is fully up to date and accurate to the best of my knowledge.

I started this layout about 4 years ago. I had come into possession of a DCC locomotive with sound. I did not know what exactly that meant when I bought it. I brought it home and set up a circle of track on the dining table and tried it out. I was hooked.

I started dreaming of layouts and thinking of what I wanted in one. After 4 months of planning and thinking, I finally decided on a flipped over dog bone where at one end of the layout the loop would go over itself.

To illustrate this to yourself, just take a rubber band and twist one end. This I thought would give me an exciting place where trains could cross over each other. I saw one like this once and thought it looked fun.

During this early period before I started building the layout itself, I had a 1200 mm x 2400 mm (4-foot x 8-foot) sheet of plywood on legs in my basement with a loop of track. That way I had somewhere to run a train or two and dream.

Next I determined that 4 inches (100 mm or 25 scale feet in my case) was safe not knowing just exactly what to expect, to allow one track to cross over the other. In the end it turned out to be too much. I am modeling England and realized later I only really need 13- 17 feet or 70 mm maximum in my case.

My scale is 1:76 or about 4 mm to the foot. Originally the locomotives climbed this on a 3 in 100 slope and also went around a 180-degree curve during this climb. It was okay for diesels but steam locomotives struggled. With 2 coaches they were fine, but 3 was a struggle and 4 was impossible. Eventually I changed that but not yet.

I came up with a track plan after 3-4 months and started building. When I got the track laid, I started scenery. I did notice there were some problems with the incline I talked about earlier, but kept moving forward.

In retrospect, that was a mistake. When I was quite far along on that part, I decided to make an extension and put a tunnel and mountain at the far end. The dog bone got much longer on one end.

This worked well, but the old original curves were just not up to par. I realized I needed larger curves. The large radius curves on the new part really worked well but I wanted some bigger ones. That was when the Big Curve project was born. They are still there and work marvelously. The inside track of the Big Curves is a 40-inch radius or about 1000 mm. They slowly rise at 1.5 in 100 except where the platforms are. It worked great. I was also able to take out some short curves in an S turn by filling in a small area on one side. I now had smooth sweeping curves on four of the 90 degree curves making up parts of the dog bone.

When all this was working smoothly I found myself yearning for longer trains. Howe street Station was designed for 5 coach trains, but I could not run steam trains that long yet.

The next project was the Shell Hill extension. I extended another 5 feet (1500 mm) from where the original troublesome curves had been where they went around the hill and installed foam inclines at 2%. When that was done I had the layout I have now except for some fine tuning, which includes the addition of the Far Moor line, the camping siding, the steam shed and the diesel maintenance building.

That is the story of Farland Howe. It runs smoothly now and trains up to 7 coaches regularly round its spacious curves. The layout has grown to 22 ½ feet by 13 ½ in a U shape.

The most important thing I have learned with my experience is that model trains pulled by locomotives can only reasonably climb an incline at 1.5 in 100 to 2 in 100. Remember in the real world where they needed much more traction, they put more motors on more of the wheels like on subway car and tube trains or keep the inclines modest. Model trains don’t allow multiple motors throughout the train yet. If you cheat on this rule, you will be making compromises from that point on. Your layout will have problems. It is the basic physics of coefficients, weight to friction. It is nature and you just cannot cheat. The other thing is loading gauge. No time for that one now.

The attached video is a little old. Some time has passed since it was made, but I think there are several valuable nuggets in to for newer modelers. It also explains the Farland Howe layout and how it evolved over time. It is my journey towards what exists now.

Thank you Al for all your good works and giving folks who are starting out a chance to hear from folks with experience and have already made a few mistakes. It is sharing at its best. My advice, if it doesn’t work as well as you want, tear it down and do it differently. No need to live with it. 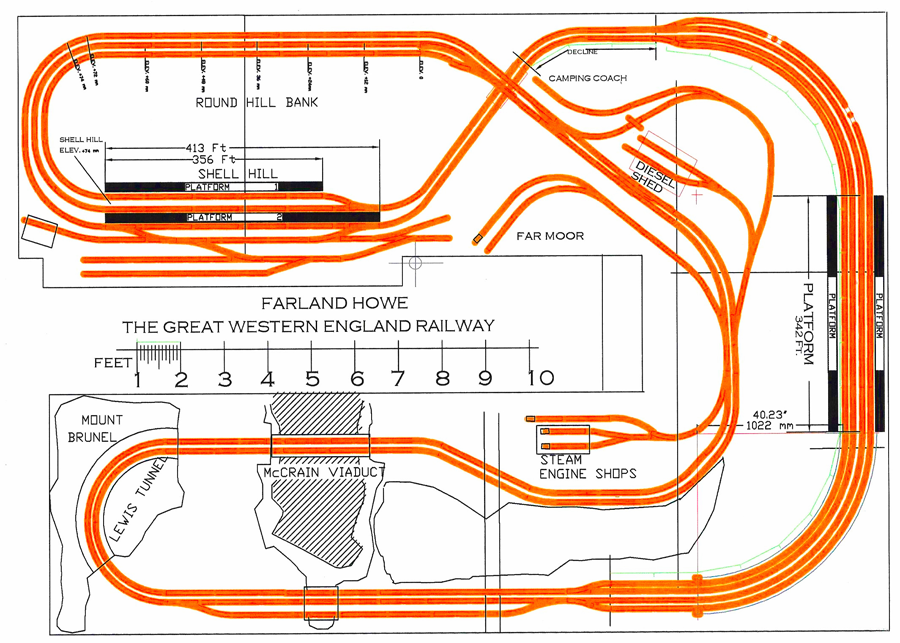 A huge thank you to Rob for putting the video together and writing the narrative.

Who would have thought, one DCC loco would lead to all this?

Well, that’s what it’s all about: making a start and enjoying yourself.

Inspired? If so the Beginner’s Guide is here.