Hope you are all having a wonderfully festive time.

I thought we really must have a Christmas layout today:

I don’t know if you remember me, but I sent photos of my small N Scale layout quite a while back and it got good comments from some great modelers and I felt honored.

This layout had a strange genesis, I had one of my locos, the Santa Fe warbonnet F7 stop working and after troubleshooting, found the decoder had failed.

The loco was a bit noisy and didn’t run really well, so instead of replacing the decoder, I rewired it to DC and decided to run DC trains around my small Christmas Tree.

Well, this developed as another stream of consciousness design and now I have a layout with a folded over under loop and two spurs.

The spurs can each hold a DC train and the track in the spur is only active when I throw the toggle switch to the spur. That way I can hold two trains and run either one out and around and switch them when I want.

The two turnouts are controlled by an Arduino driving small servos like my main layout and I used the second pole of a DPDT toggle switch to power the spur track.

The DC power pack is a $3 DC to DC buck converter and a 12V wall wart power supply. It’s truly a ghetto layout as the electronics are in the mountain, thus the removable mountain top.

Like I said this was to be a simple loop around the tree layout, but I just kept adding scenery.

I built the trestle and truss bridge from stained basswood sticks and the girder bridge is a cut apart Atlas plastic bridge to accommodate the curved track.

The layout is 28 inches by 37 inches, the size being determined by the needed room to do an over under with reasonable grade. The layout is basically cookie cutter design on 1/4″ ply mounted to 1×3 bench-work.

I used a bit of plaster cloth and Sculptamold to finish the scenery and the mountain is made from the same florist foam with Sculptamold I used on my main layout.

This Christmas N scale layout did give me a chance to fool around with my static grass applicator I made from a $3 Harbor Freight bug zapper. The thing runs on D cells and generates 15,000 volts. It looks like a tennis racquet and I just removed the racquet portion and replaced it with a small sifter from the dollar store connected to one terminal.

I then took the other terminal and brought it out to an alligator clip which I clip to a dissecting needle and it works like a champ. So basically I have a $120 static grass applicator for four bucks. It’s not easy being cheap.

A huge thanks for Harry sharing his Christmas N scale.


And now on to Ernie:

As I mentioned, my layout was one of the designs in the “Nine N Scale Railroads” by Atlas. I picked the big one in the last chapter being greedy as I am.

I’m not smart enough to hardly get past an oval with two and a half sidings so the Atlas book opened new horizons for me.

Liked the fact that it can run four trains at a time with upper and lower double main lines, has a small rail yard, mountains, tunnels, a twin crossover, a river, and a massive twin viaduct traversing the valley.

What more could a guy ask for?

This all rolled into one 48″ x 72″ sheet of plywood! Can stand the thing on end in a closet when not in use.

Layout used one 4 x 8 sheet of plywood cut to 72″ in length with the cut off end used for the upper level including some cookie cutter technique used for good measure.

Adding to the fun is the fact that there are two interchanges between the upper and lower levels allowing for traffic between mainlines.

But that’s not all: you have a reversing loop in the upper level AND the interconnects are designed so that a trip to the upper pike and back switches mainlines on the lower level upon return.

Who ever designed this thing easily understands Einstein’s therory of relativity!

I built this layout back 30 years ago and have recently pulled it out of the closet and am enjoying it immensely.

That said this is old school with block wiring throughout and the same turn out controls the Flintstones used back in the day.

Track is all Atlas sectional code 70. Of course then I discovered code 55……next pike…..(recently picked up 100 code 55 hand built #6, #8, and #10 switches in need of work removed from a layout that was taken down) but that’s another story…..

Like the idea of controlling the trains with block switches (keeps the mind excersized), have to work at it when moving between lines or I can just let them orbit on each mainline and relax and watch. Like running long trains.

Can only allow three trains to orbit without attention due to the double cross over on the upper level. To run four you have to tend to that crossover, and, yes, we have had wrecks!

This layout takes four power packs so I used the little cheapies from small train sets for years.

The cheapies would pop the internal breakers when running ABBA configurations all powered after some run time so stepped up to a pair of higher end twin cab units.

The new twin cab units also had some issues (one cab runs half speed always till it warms up) prompting me to consider building my own with plans I have found recently (materials are very inexpensive and use laptop chargers which are a dime a dozen).

Probably more then you wanted to hear! Rolling stock accumulated over the years always watching for deals. Scenery time next!

(Steve but everyone calls me Ernie)” 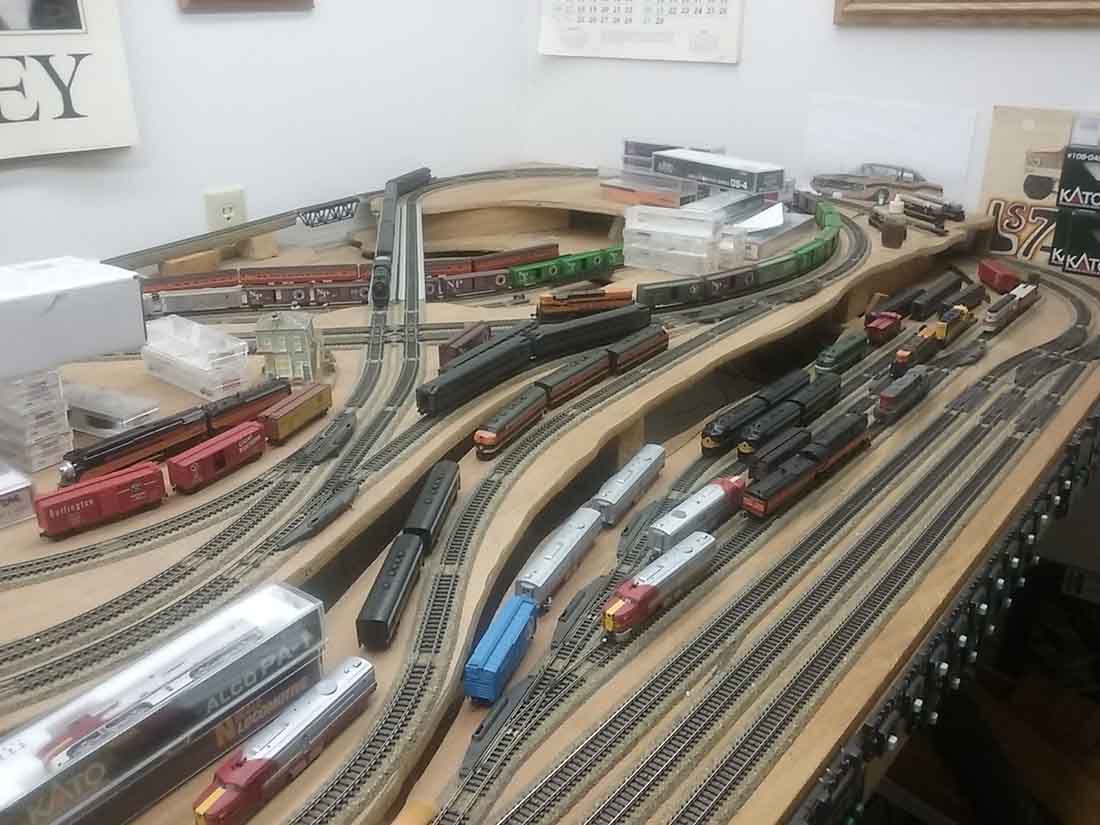 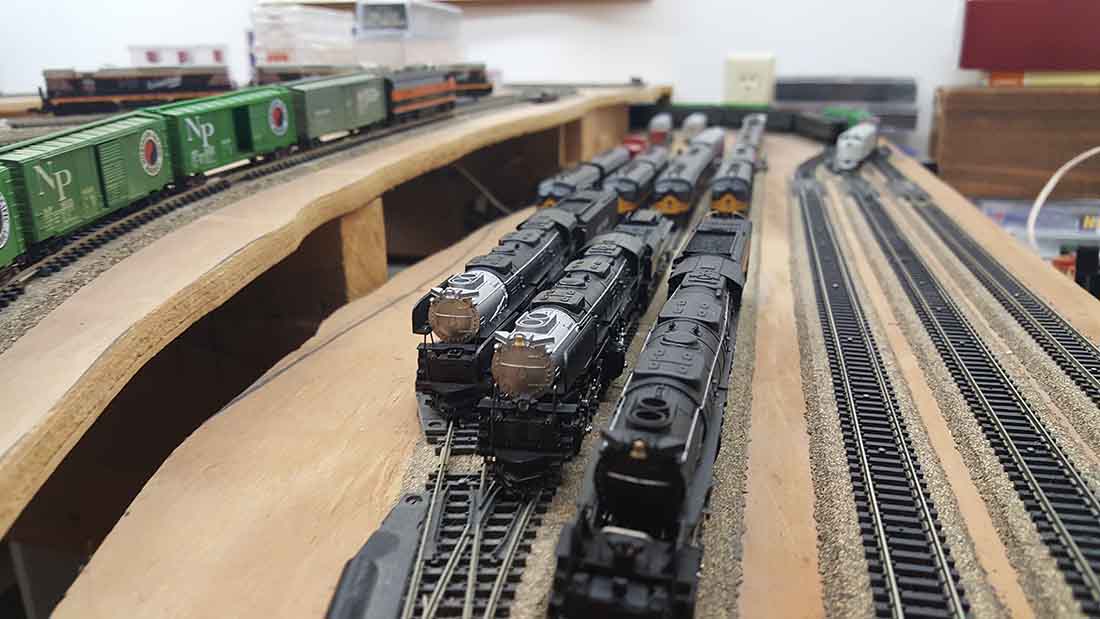 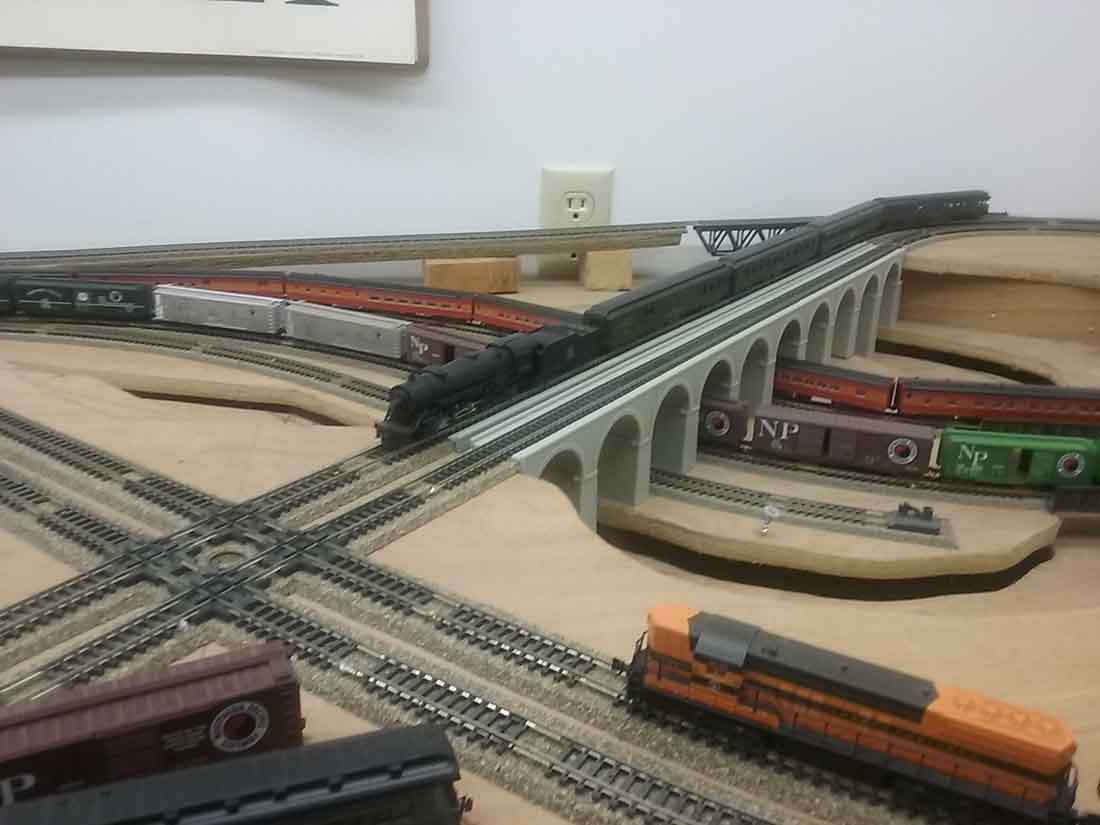 Looks like Enrie’s having fun with his N scale railroad Atlas.

If you missed his last post with all the pics, it’s here.

Can’t wait to see the scenery!

And if today is the day you make your train layout dream happen, the Beginner’s Guide is here.