Dan’s been in touch with a wonderful post on how he made his model railroad personal.

He’s done what I lot of you do and really made his layout ‘his own’ by adding some personal touches:

“By design I had gathered some rolling stock that had a connection with parts of my career. The consist that the attached photos show started in 1990.

The event was the Mid Atlantic Food Dealers exhibition in Baltimore, MD. Our company, Norristown Wholesale Inc. was a family owned produce distribution company, one of the largest, if not the largest, in the Delaware Valley marketing area.

We had established a pattern of being very creative in our displays, and we always ended up winning a major prize for our efforts.

I was the lead for this show, and I took advantage of Baltimore as a railroad hub, and I used that as part of our theme.

I built a station with a fruit and vegetable counter with track announcements, and a window view of the old Camden Station.

Today that building still stands as a Historic Landmark. The photo was a pre-WWII view of the station that I obtained from the B&O Railroad Museum. My wife made some drapes to add to the window look. 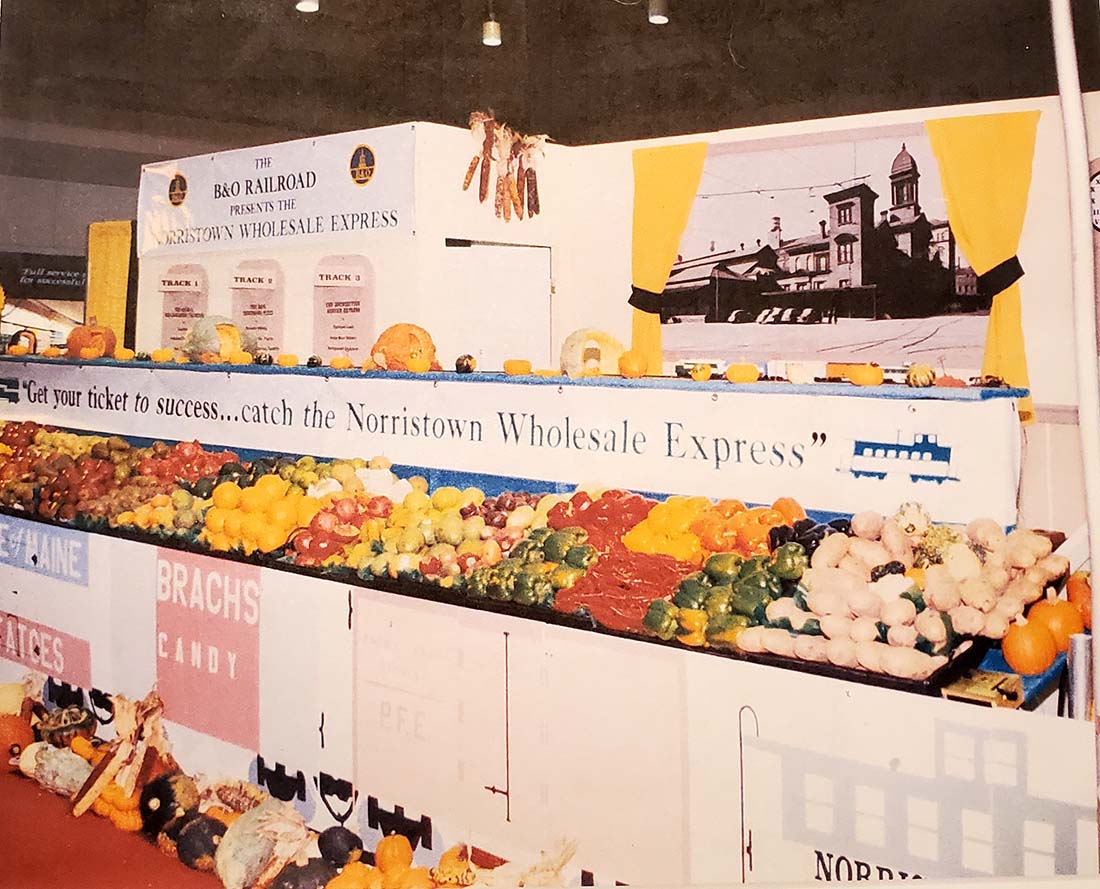 The front of the fruit counter was made up of the F-3 diesel engine and 3 railroad cars that represented the some of the products we sold.

I made a HO train of these cars with an F-3 lead and of course a caboose. Both the engine and caboose were in the NWI livery. The colors on the display were rather soft as we used fire retardant paint that does not have a lot of pigment.

Our little HO train would go back and forth across the top of the counter. We finished our display early, and Charlie, one of our regional managers came up with the idea of making tunnels out of Hubbard squash. It was a great use for the lumpy squash and a good look for the days of the show ….any longer then things would of course get rotten.

In 200 I transferred to the Supervalu home office were I performed a variety of duties, including serving as a Corporate Meat Procurement Officer. I had a some meat related cars in inventory, and after I retired I realized I had an opportunity to create a consist that included many of my vendors and packers.

I have 2 Hormel cars because one was thought to be lost only to arrive weeks later in the mail. It was fun searching for the cars. One stretch is the Seaboard Lines car, as I could not find a car for Seaboard Packing.

I bought product for a variety of supermarket chains, both corporate and independent. One of the largest chains was Acme Markets, a corporate chain with stores throughout the mid-Atlantic region. I even worked for Acme the summer before grad school. The Penna. flatcar with two Acme vans was a good item to complete the consist.

The Acme vans are not official to the chain, maybe closer to Wyllie Coyote and the Roadrunner. The Berkshire commemorative engine, a gift from a good friend, pulls the 11 cars up my 2% grade with ease.

My commodity train was a fun project and it tells a story. My next consist will be made of actual companies that use the names of my grandchildren. A project for the fall.

A big thanks to Dan for sharing his how he made his model railroad personal.

I do love how you all add your personal touches to your layouts.