“I found a good use for the wrapping that tools and screws and such come in. It is almost perfect for glazing in the print out buildings.

Hope you can use this.

My grandson and I have started our railroad project. The photos aren’t much but everyone says the first thing to do is get started.

We are doing an HOn3 logging theme as I was raised in the Pacific Northwest. I had built an O27 and S gage layout as a young boy. We have built a 4×8 base and we are currently planning the layout.

Working with my grandson is allowing me to teach him how to plan things and then lay them out. Soon we will be building and running trains. 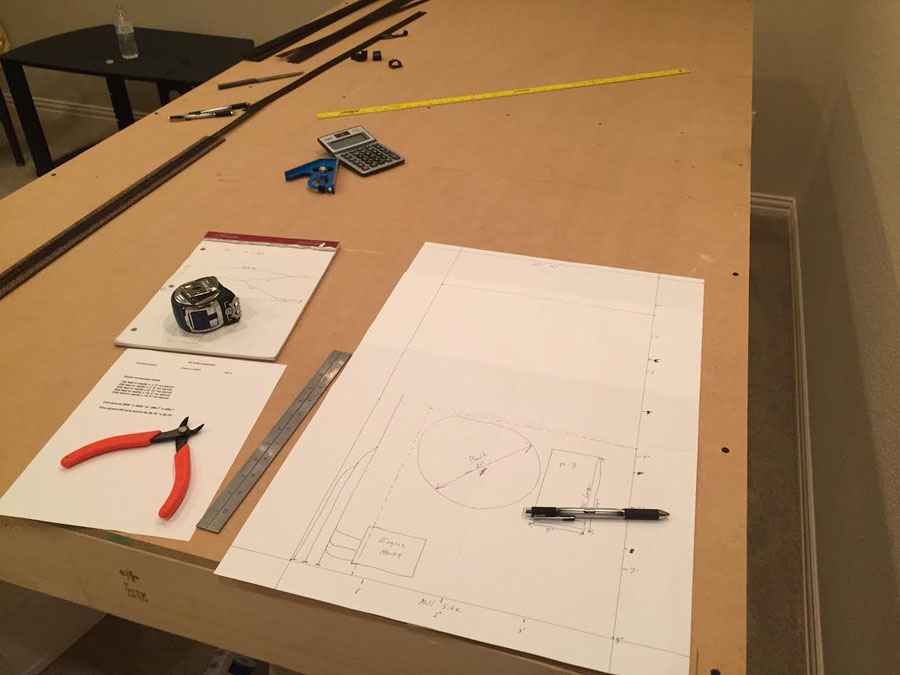 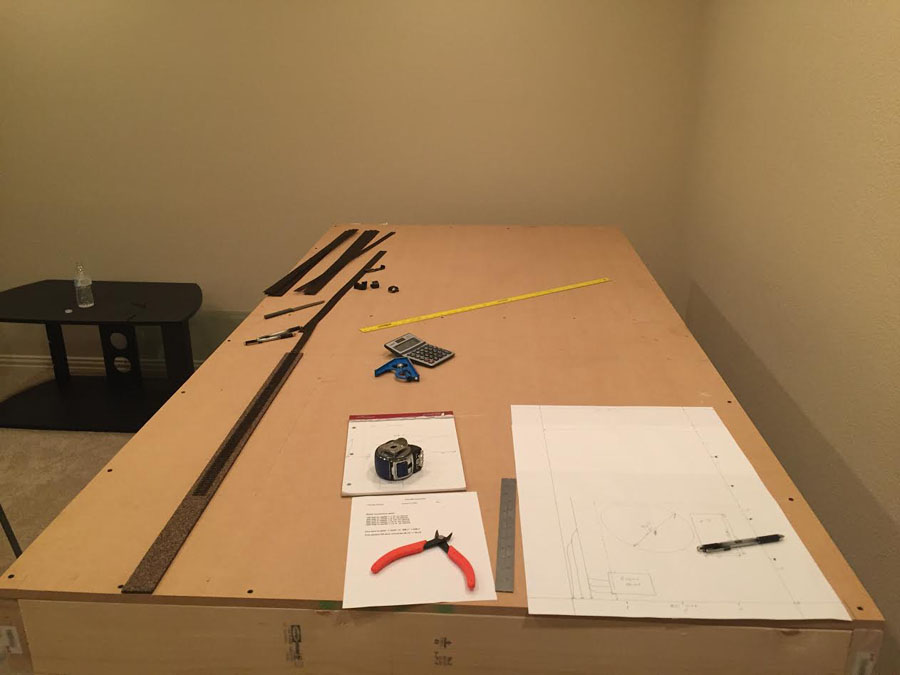 “Hi, From Joe in Fayetteville Georgia.

Years ago I wanted to do paintings so I purchased the “Joy of Painting ” book of Bob Ross and that go me into wall painting for my train layout. I am sending pic’s of mine.

I had a 25 x 25 workshop with HO scale and with dual manual operation. I have since moved into a smaller home and let all of mine go with the sale of the old home. As you can see with the layout you cannot tell where the layout to wall starts.

I even have clouds made with pillow stuffing hanging from the ceiling with fish line. 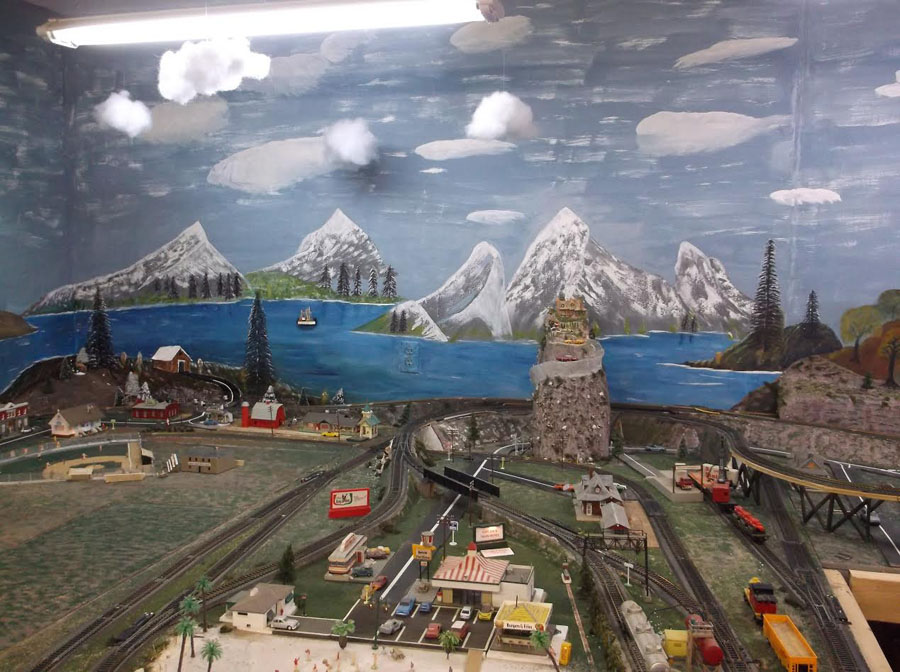 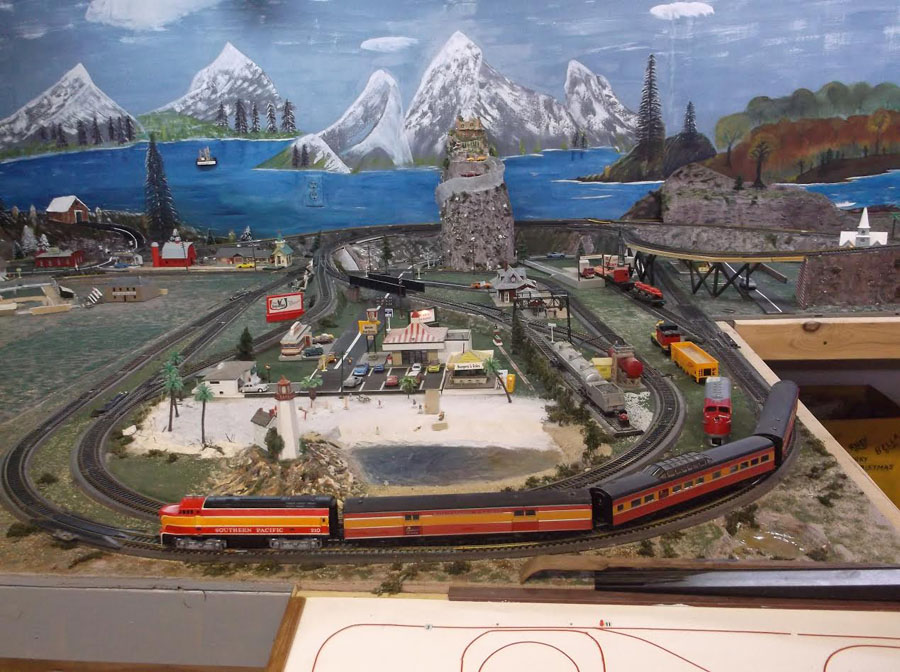 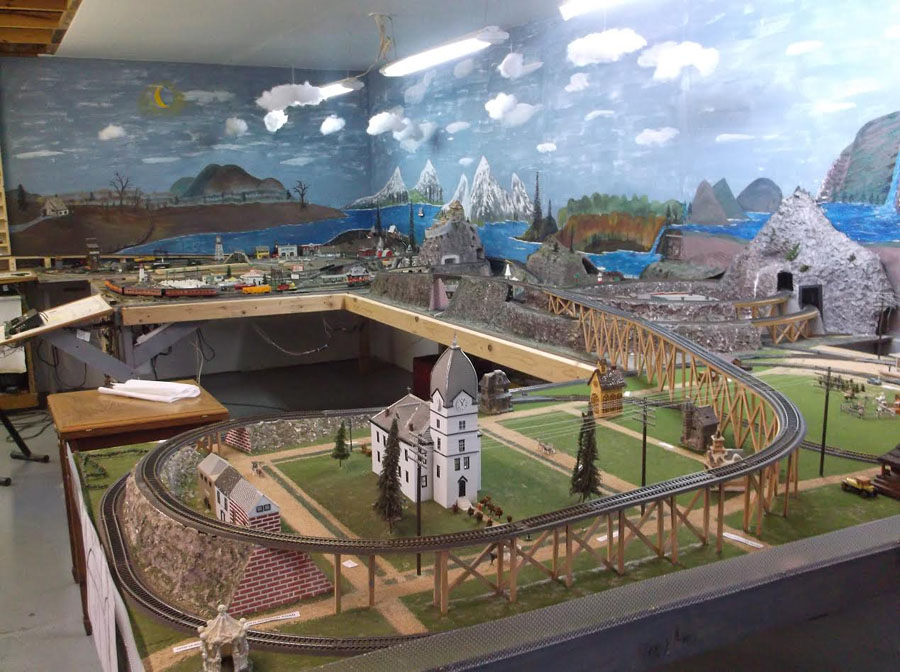 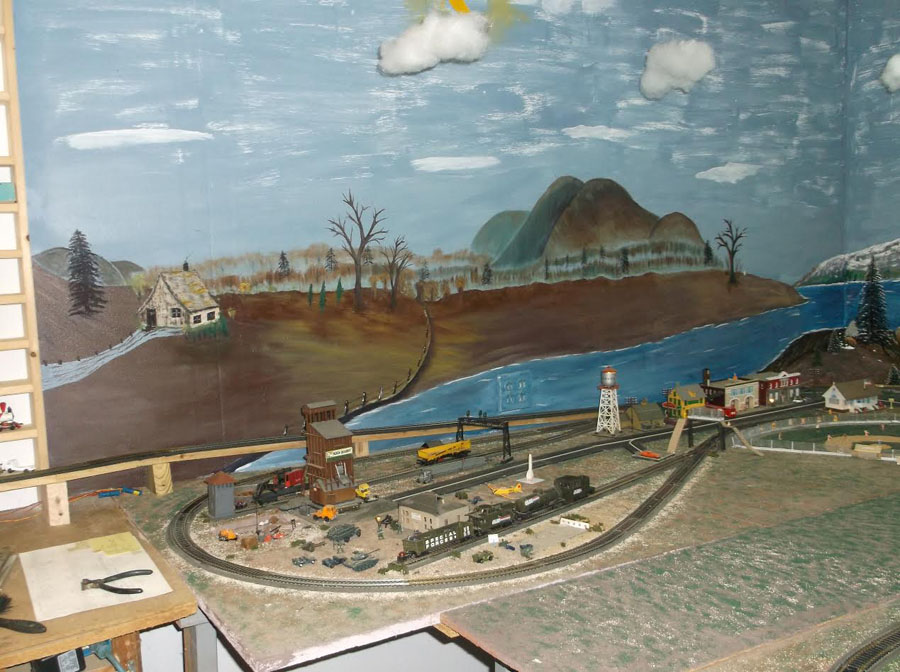 “A reader recently asked for help in deciding which to use – code 55 or code 80 N scale track.

Since you are asking, I must assume you are aiming for a realistic looking railroad. Let me preface my answer by stating that I model in HO, and I am using code 83 vs. code 70 and code 100.

Code 70 should be used in yards and sidings. With code 83 I have had no derailing problems due to size. Code might present problems with larger flanges on older rolling stock.

Other than track, they should be identical, about 3 cars in length and about a foot wide. Use roadbed, ballast, and grass exactly like you plan to use later. Place two similar cars, one on each diorama. Look at them both from multiple angles, and see which looks better in your eyes. Repeat with two engines. Now you can make your own decision.

It also depends on the era you are modeling. If you are modeling an older era (pre-diesel, for example) then light rail may look better. Also, using code 80 on your mainline and code 55 for sidings, then the contrast would contribute to an overall more realistic layout.

Once you are finished with the diorama, add a back to them, add basic scenery, and use them to display your models.

After getting back into model railroading after patiently waiting for 34 years, I was shocked to see how much the model railroad hobby had gotten expensive.

Thankfully I had purchased over 300 feet of atlas track and 36 switches back in 1983 and it was boxed up until February of this year when I started by long awaited layout. So, I was determined to make use of this track versus wasting it and purchasing something new.

As I have been re-educating myself on all the new stuff out there, I have also been wanting to make this affordable and see what options are out there to some of the more “expensive” items.

Now, first, I totally support quality products (as I have been in electronic retail & repair for more than 30 years with a brick and mortar store), but I feel there are times and situations that a cheaper alternative may be more fitting. I have been looking at a few inexpensive products I found for N scale and thought for a few bucks, lets see if they live up to what they appear to be and if not, I have learned my lesson. I have sent you photos of 2 products that I found and ordered and have been pleased and there is more to come.

I ordered a package of 100 painted people that was labeled as 1:150 scale (Europe N scale size). I just received them and I am very pleased with these. I measured many of them and they range for a person in the real world being 5’6 to 6’6, so actually they are not bad at all. Most were in the 5’6 range. Some people are sitting as well as standing. I thought this is a great bargain for $13.99.

I also have been making my own trees which has been fun, but again wanted to see what options where out there.

I found 24 trees for $5.99. Well, I must be honest, they were a little cheap looking out of the bag but I did give them some dressing up with spray adhesive and various colors of shredded foam and in my opinion, they now look pretty good for a mid to background area and especially mixed in with other trees. They are plastic and the trunk and limbs are brown but I plan to probably paint the main trunk a little to tone down the dark brown color.

They measure out to 2-3/4″ tall (1″ of that being the trunk) so in the real world this would be a 36′ tree…well within scale. This was a bargain for basically 25 cents a tree!

I have more items on order and will give you my opinion on those when they arrive. I wanted to share this for those who may want to try to save some money and have some cheaper alternatives where the more expensive items may be to far away to be appreciated. 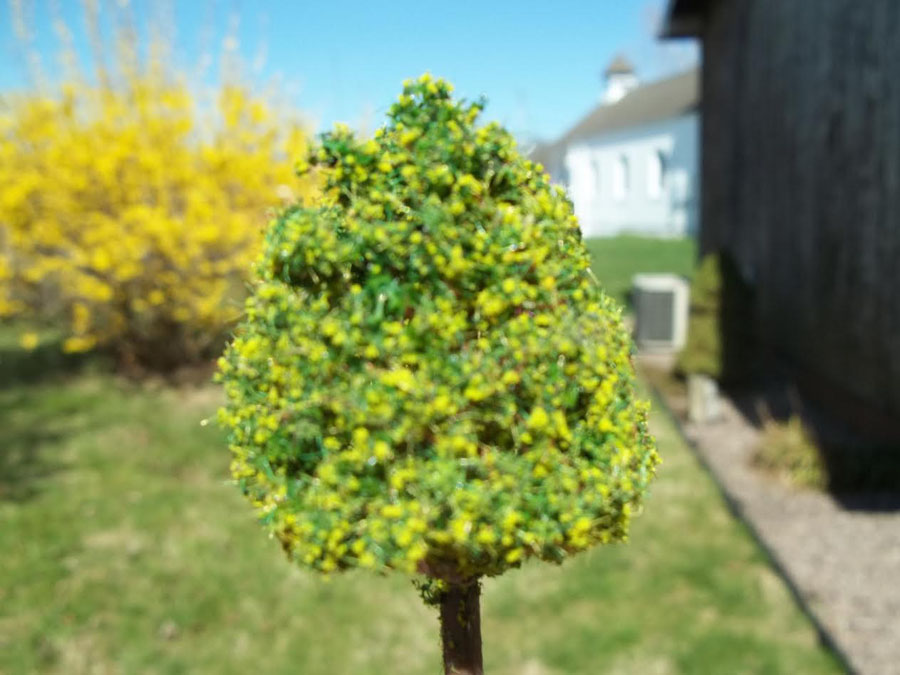 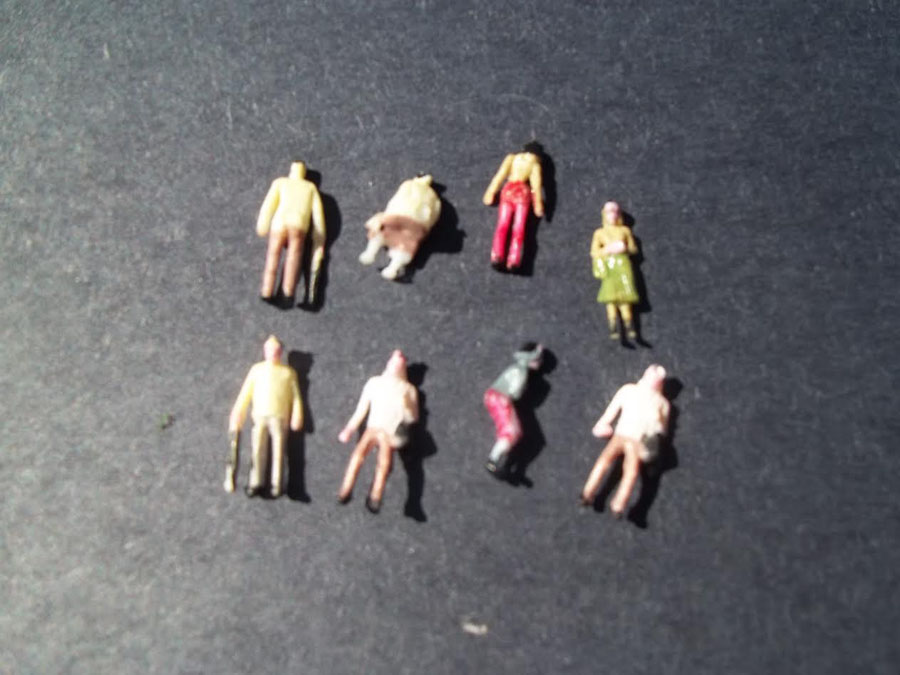 And I got this in from Joe. It’s a problem that crops up time and time again on the site:

I have been reading your messages and have found them very helpful. I am a Jamaican and am building an HO scale railway with some unique Jamaican scenes. As I advance I intend to send you some photos.

For now I have an immediate concern. I have acquired a set of very old Fleischmann engines and coaches, made I believe in Germany probably 30 or 40 years ago. I am adding to the collection by acquiring some contemporary engines and coaches and would like to interchange the wagons & coaches, but the couplings are incompatible.

I have attached 3 photos showing the difference in couplings. Can anyone help with a solution to this? 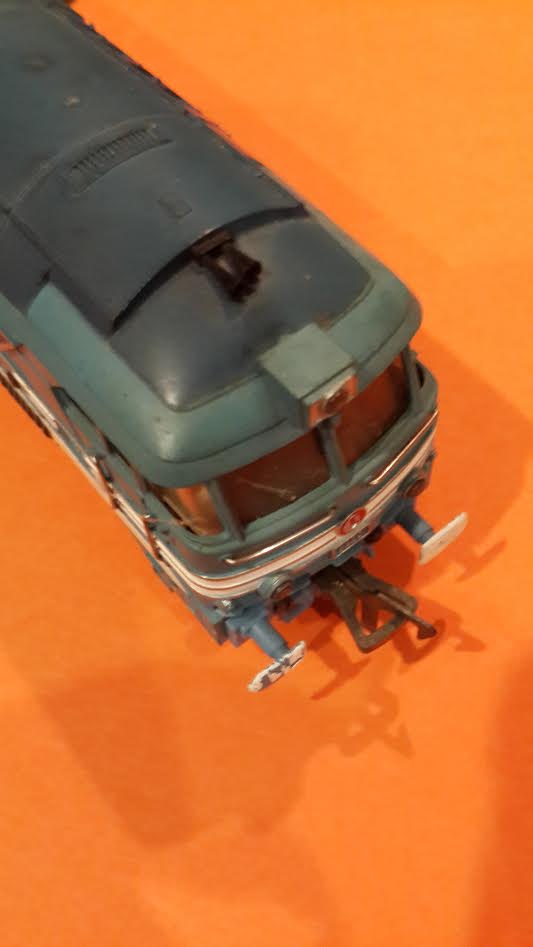 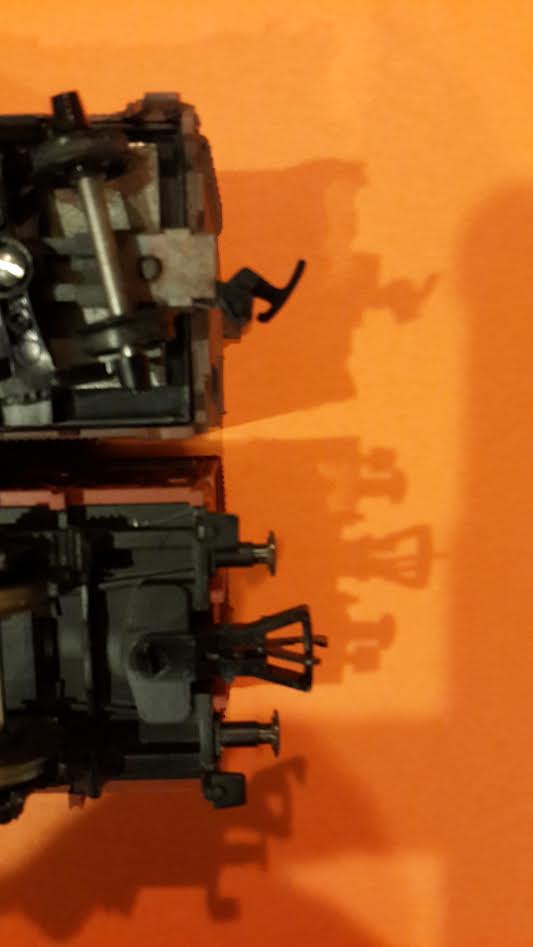 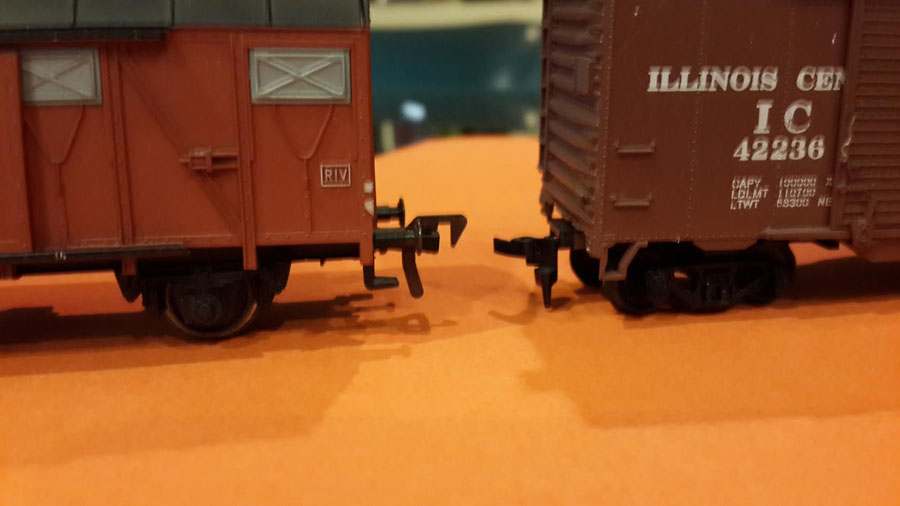 “Hi Al–really enjoy your daily e-mails. Here’s something that I’ve been thinking about for a long time (but haven’t taken any action), and was wondering if any of your viewers had done it:

A 3 gauge layout–the gauge closest to the viewer would be O, a little farther back would be HO and in the distance it would be N. The idea is that the further you are from anything, the smaller it looks.

In my ideal layout a train would begin at the O gauge station, run around and disappear into a tunnel or something,go into a reverse loop and stop.

Meanwhile out from the other side of the tunnel would come the same train in HO gauge which would then do the disappearing act at some point and resume as N scale.

Each of the gauges would have a hidden reverse loop and automatic stop/start relays so after the N gauge makes its rounds, it would reverse itself and return in the opposite direction and of course when it goes into the hidden part of the layout, would turn into an HO version running in the same direction.etc.

Theoretically it sounds kind of neat and I don’t think it would be difficult to construct. As I said I’m just wondering if anyone has already done that and any problems they encountered.

Regards & keep up the good work

Can anyone help Joe? And I know some of you out there have done exactly what Terry is suggesting. If you have, please do send pics.

And poor old Joe, moving and having to let his layout go. Sadly, I get too many mails saying that!

That’s all this time folks. Please do keep ’em coming. And don’t forget the Beginner’s Guide is here if you think your time is right now!