John’s been in touch with his N scale EZ track layout:

“Right now my life is in transition.

Like many, I’m forced me to reassess my priorities.

In the reassessment, I purchased a new home in Nevada where I am building my minimum gauge outdoor railroad.

I am still working in Southern California 400 miles from my Nevada home. That commute is a killer!

To keep myself occupied, I decided to build my last Southern California layout.

The layout had to be small as my relocation and retirement are about three months away.

At first I was going to build a copy of a layout I built for my son some 25 years ago. That ship was scuttled by a multitude of misfortunes. In my frustrations I remembered a saying I learned some 40 years ago “Blessed are they that go in circles for one day they shall be called wheels.”

Quickly I grabbed my Bible to see if this could be found in the Beatitudes. No Luck.

After much research I found these words of wisdom came from Rodney Roundbottom.

Rodney was well named, he was born early in the 12th century on an morning in March, March 14th. As a bit of a Dionysian Epicure, Rodney was nearly as large at the equator as he was at the the poles.

For his size, Rodney fought well and became one of the lesser known knights of the round table, Sir Compherance of Pye.

It was shortly after joining the Knights that he uttered what proved to be a fate filled phrase “Blessed are they that go in circles…”. It seems that a couple of his better known compatriots took stock of his words (rumor has it they took a fence or two as well).

It was concluded that his observation was a slight against them and their endless discussions. They had Sir Compherance thrown in a punitentury, pilloried, and removed from the lists.

In honor of Rodney Roundbottom, my new layout is “Pizza Pye” 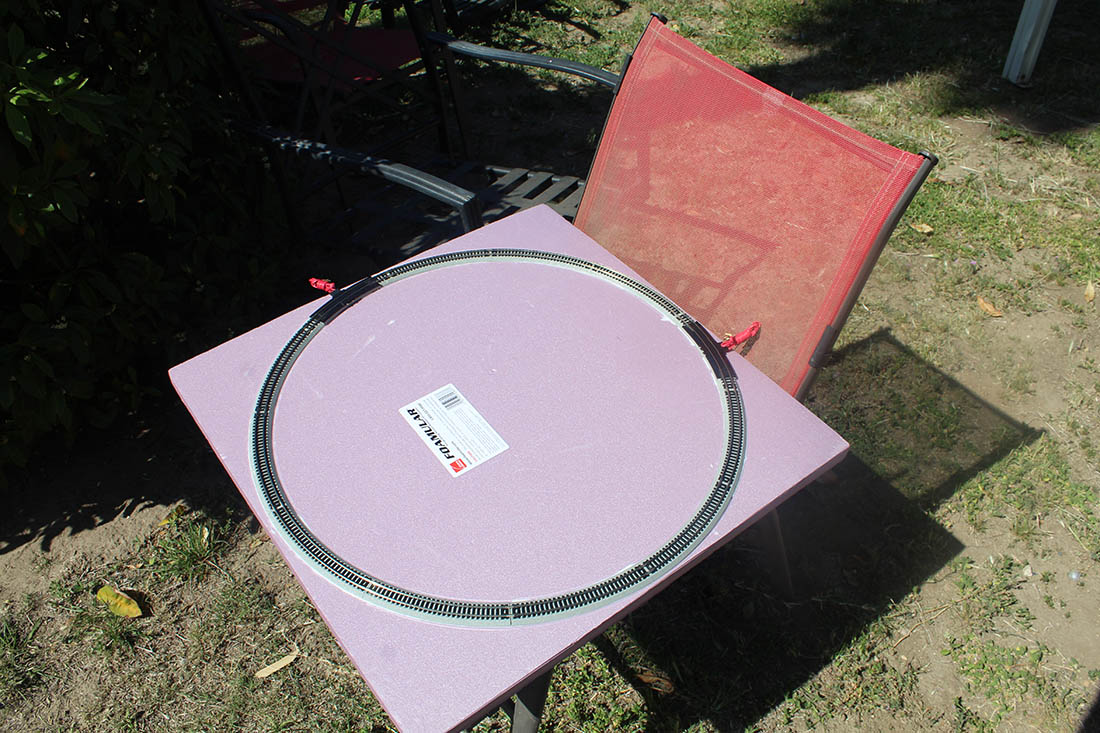 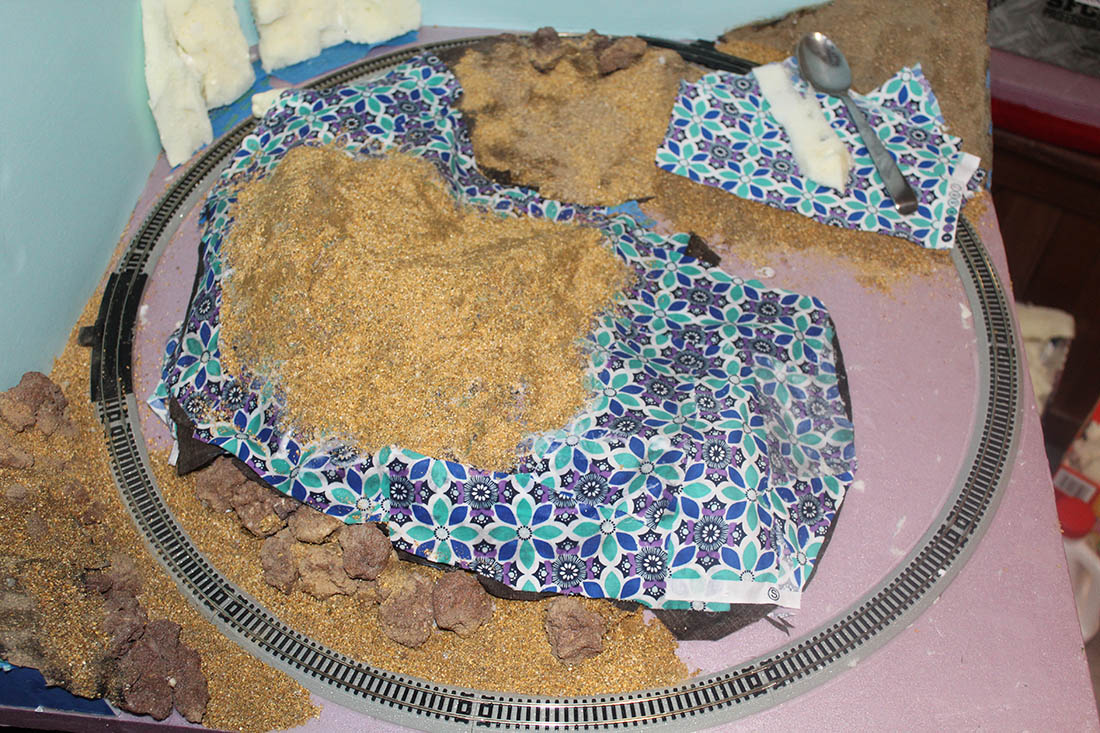 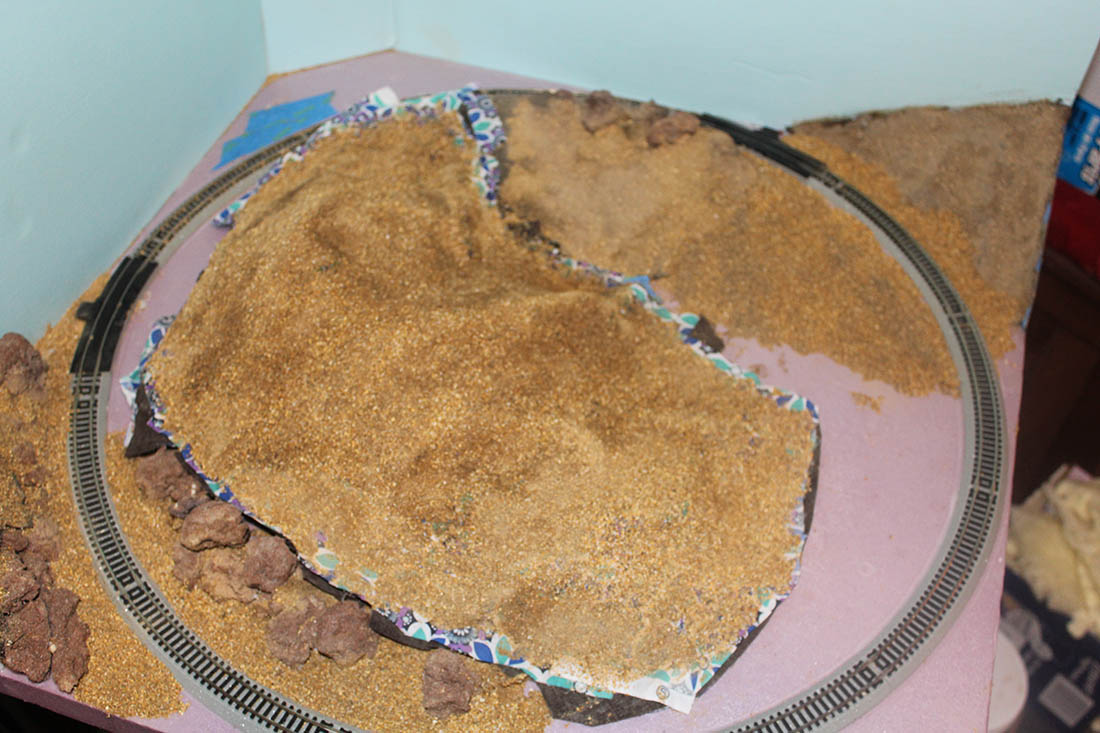 As one looks at my little layout one should notice that when it came to track, I took the EZ way out.

This track design was called a “Pizza” by the late Carl Arndt. It is a true micro-layout by his definition in that it fits in a four square foot space. The term “pizza” refers to the fact it is round like a pie and looks like it could fit in a pizza box. 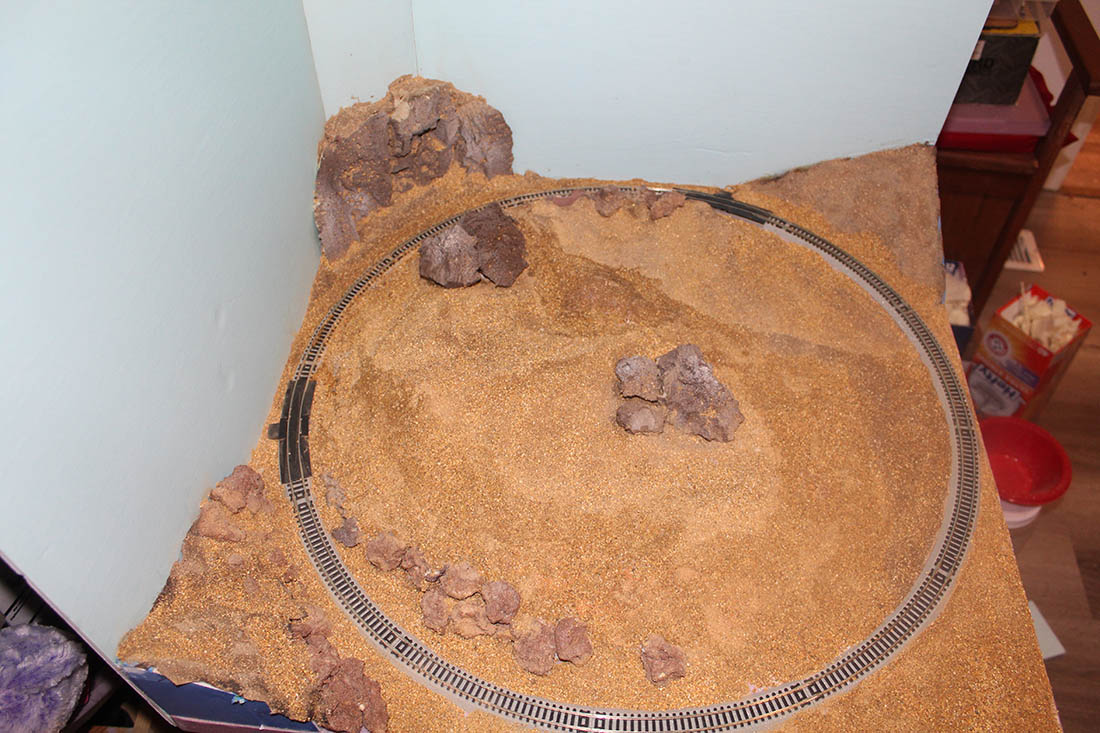 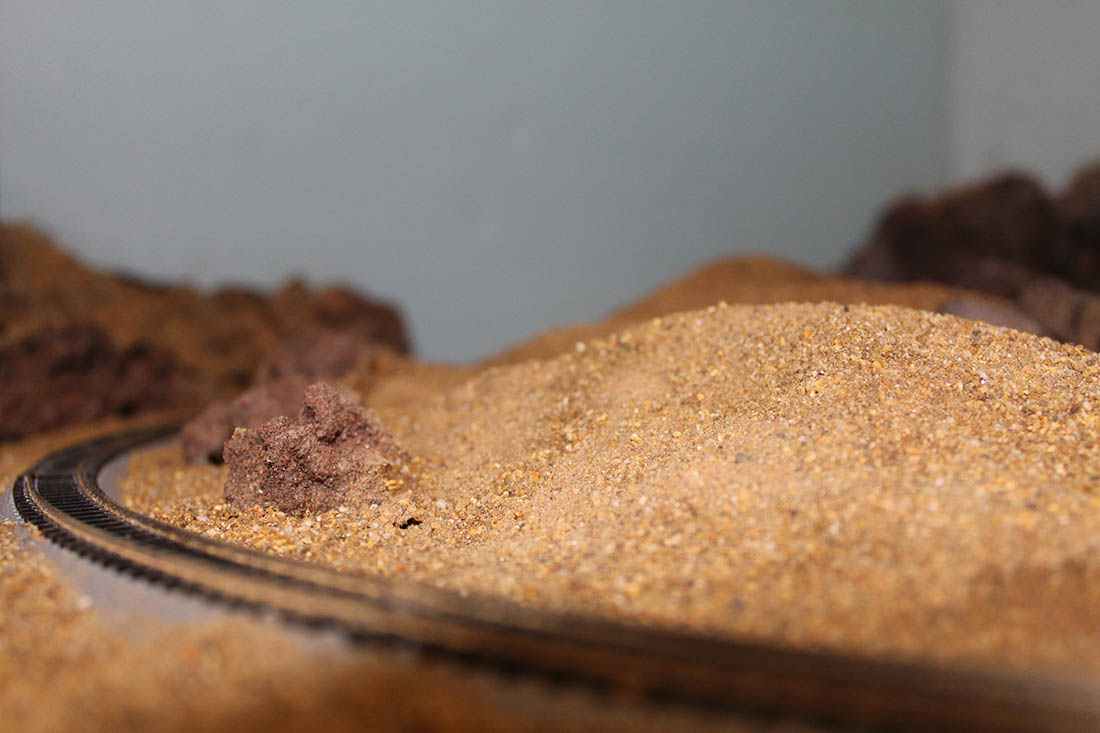 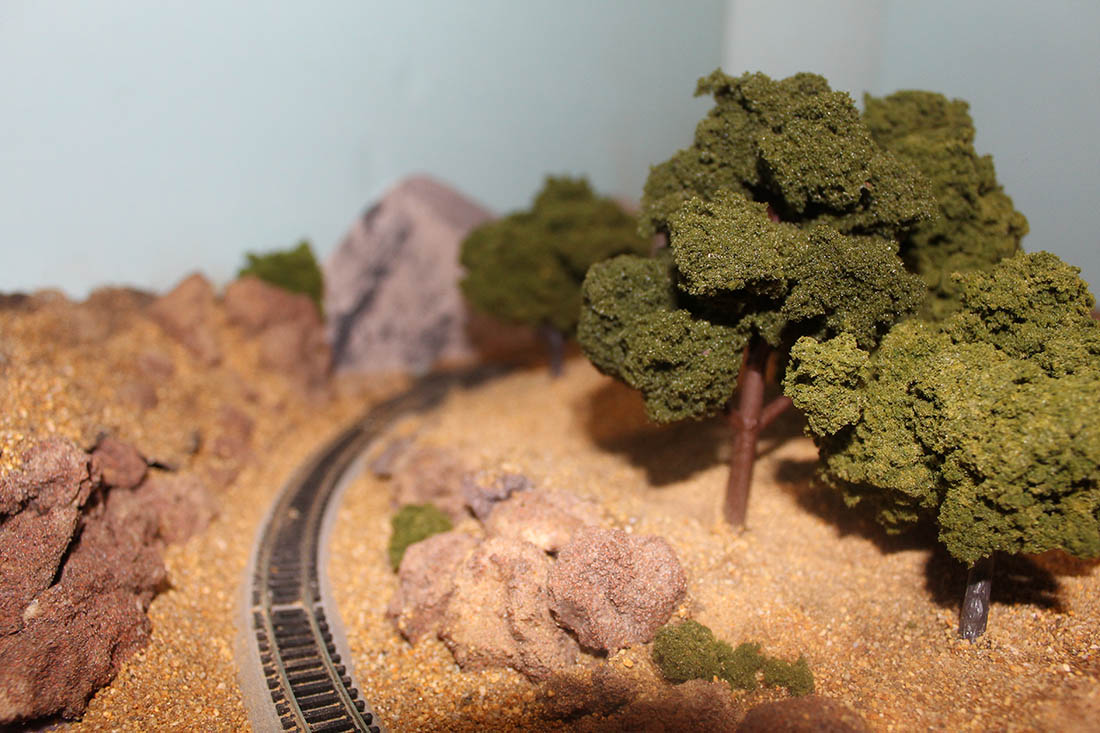 One may wonder why there are not any structures on this layout.

The reason will be obvious in a moment.

Trees and rocks are arranged to hide the train as it makes its circuit around its fishbowl.

These scenic elements make the layout look bigger, They create an illusion by fooling the eye.

There is still more to do but it is serviceable for the present. 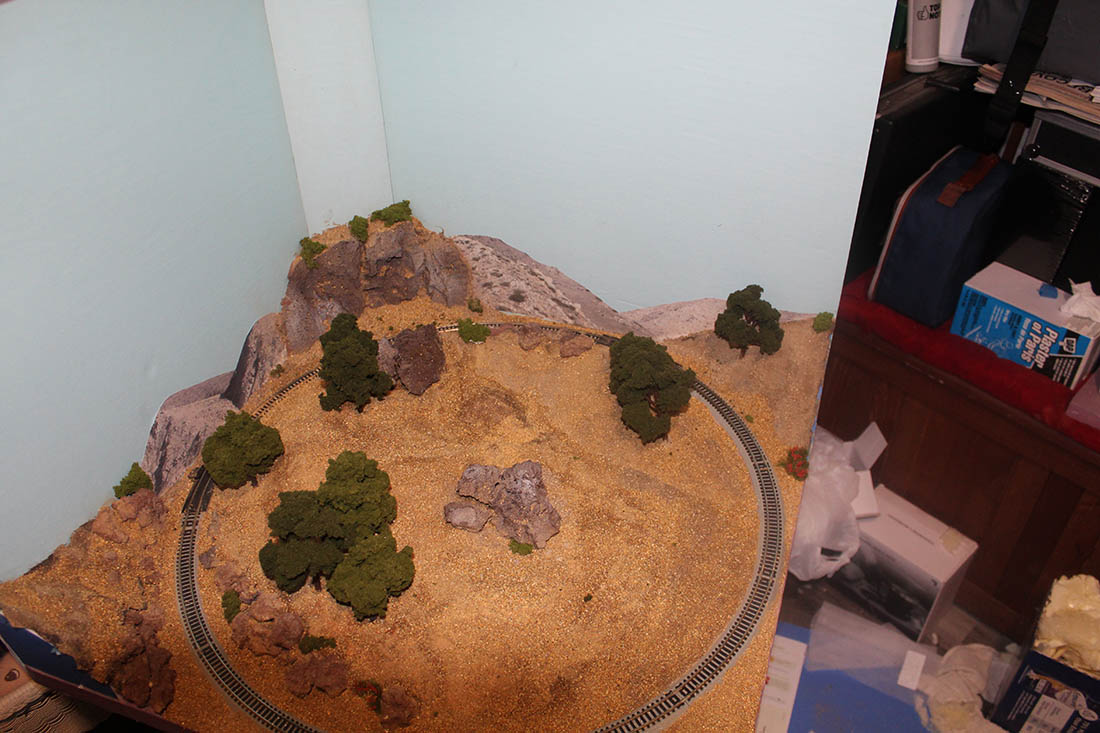 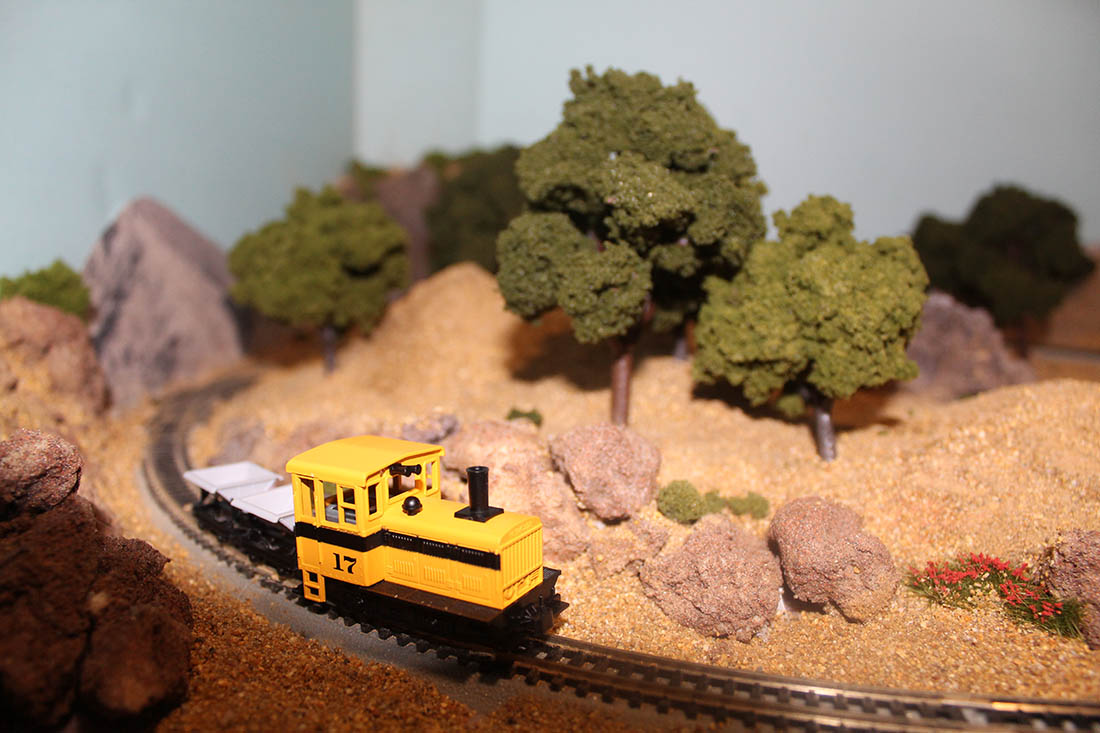 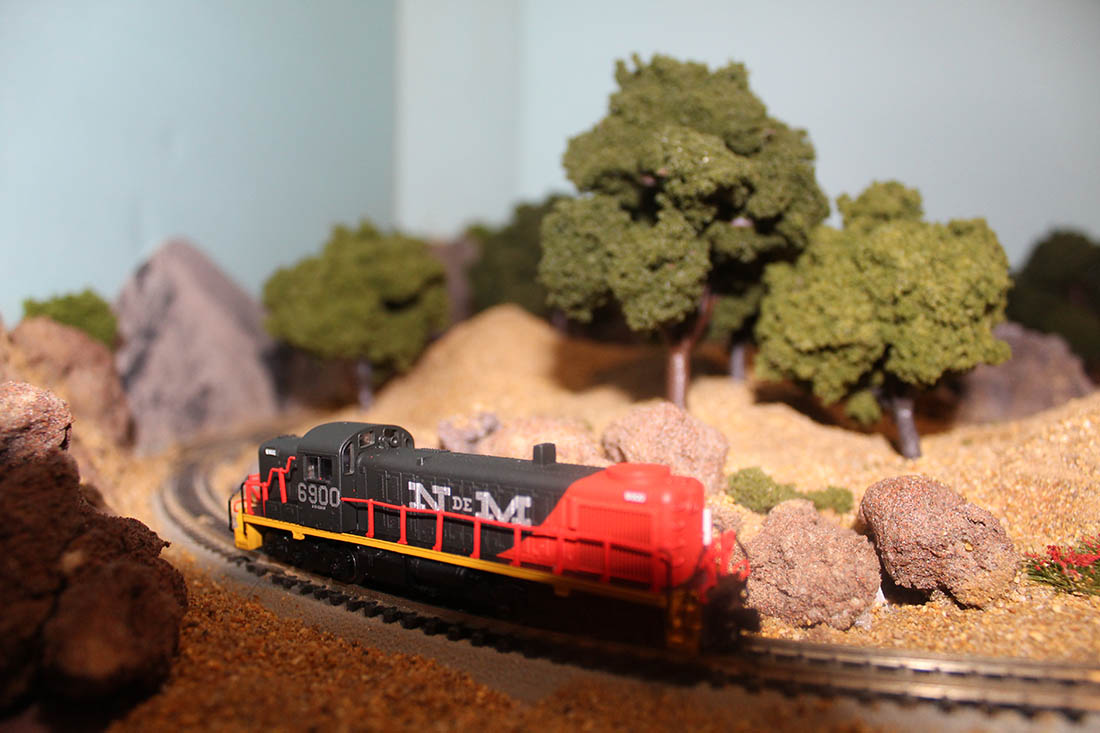 1. To try a different scale than the one you may be used to.
2. To learn new techniques, try different ideas.
3. To Get Started and have fun.

Now on to Ernesto.

There’s bit of a language barrier, but nothing google translate can’t handle:

I would like to collaborate on your page with some photos of my model, I have been a ferromodelista since I was 10 years old.

I am currently 75 living in Mexico City 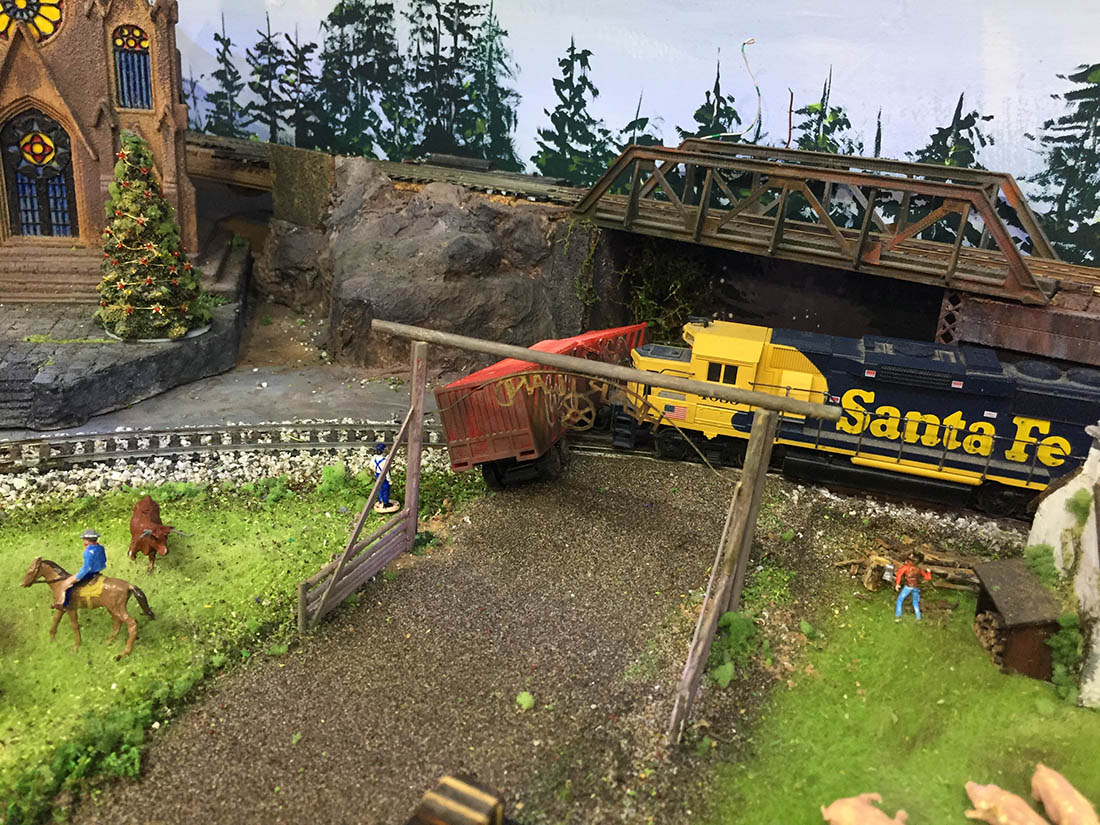 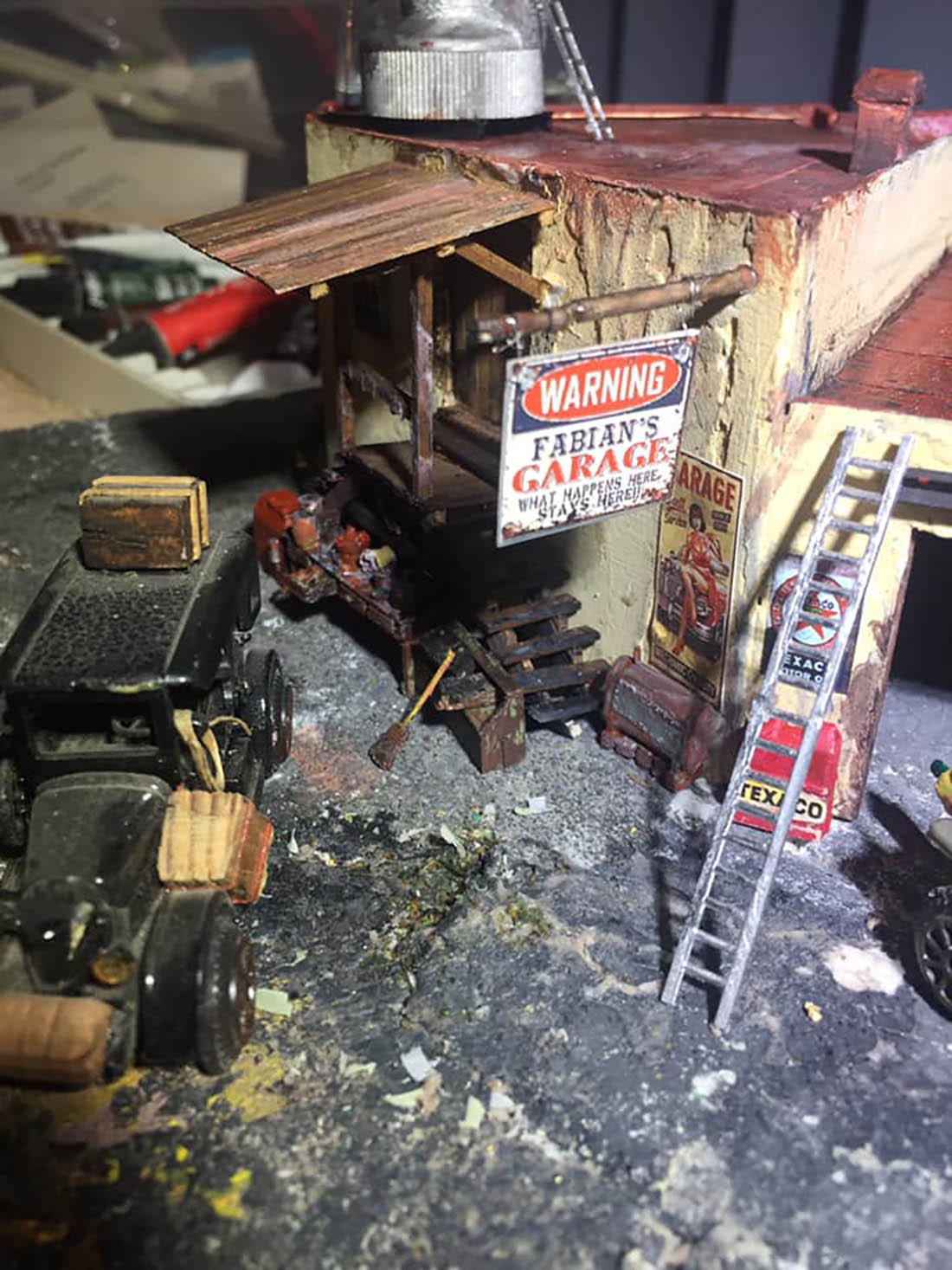 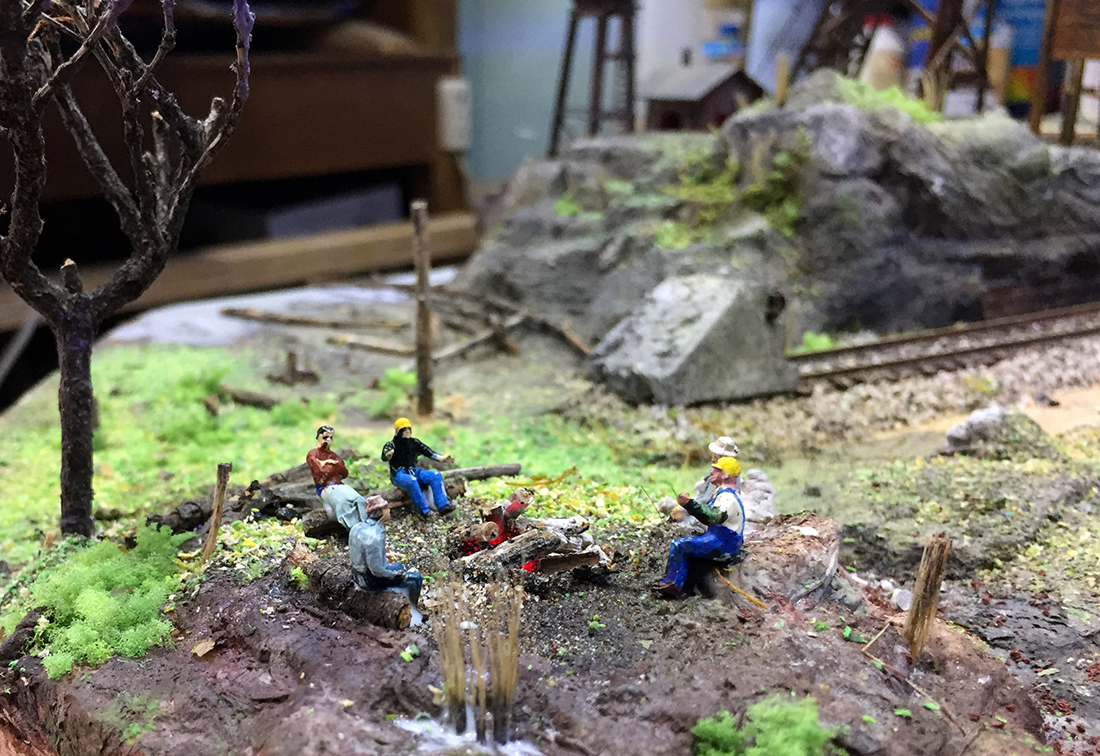 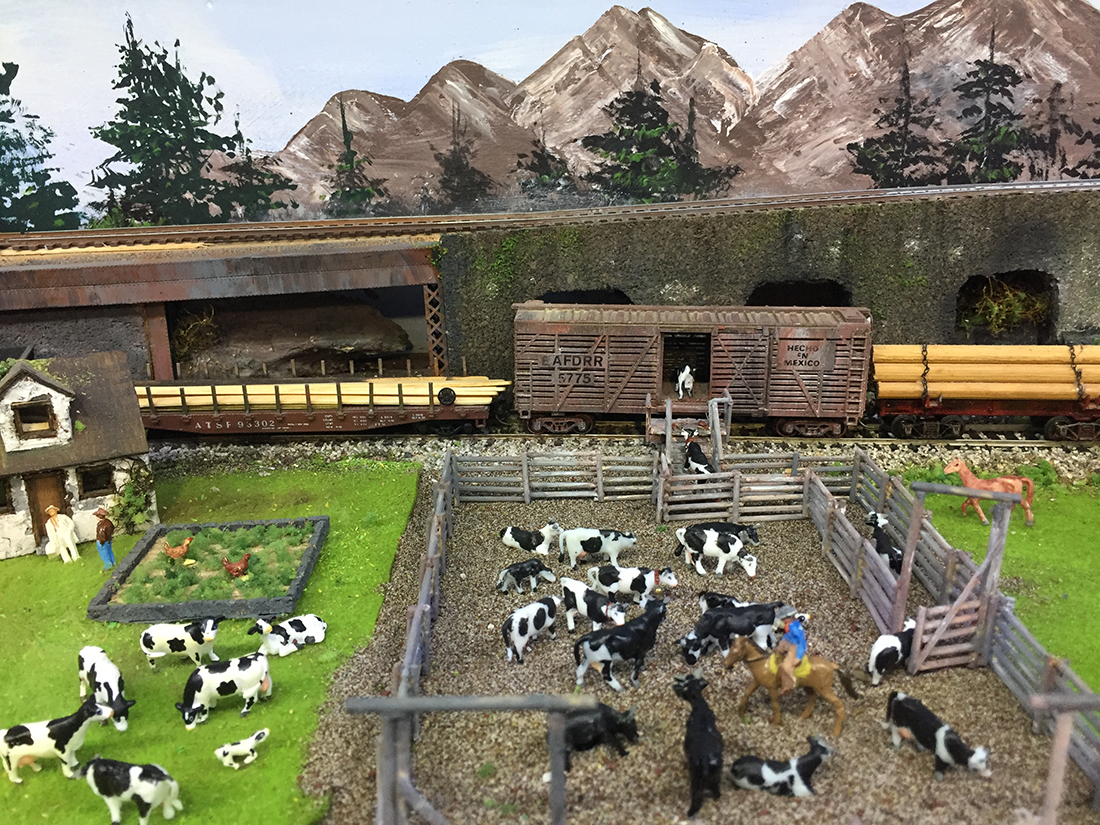 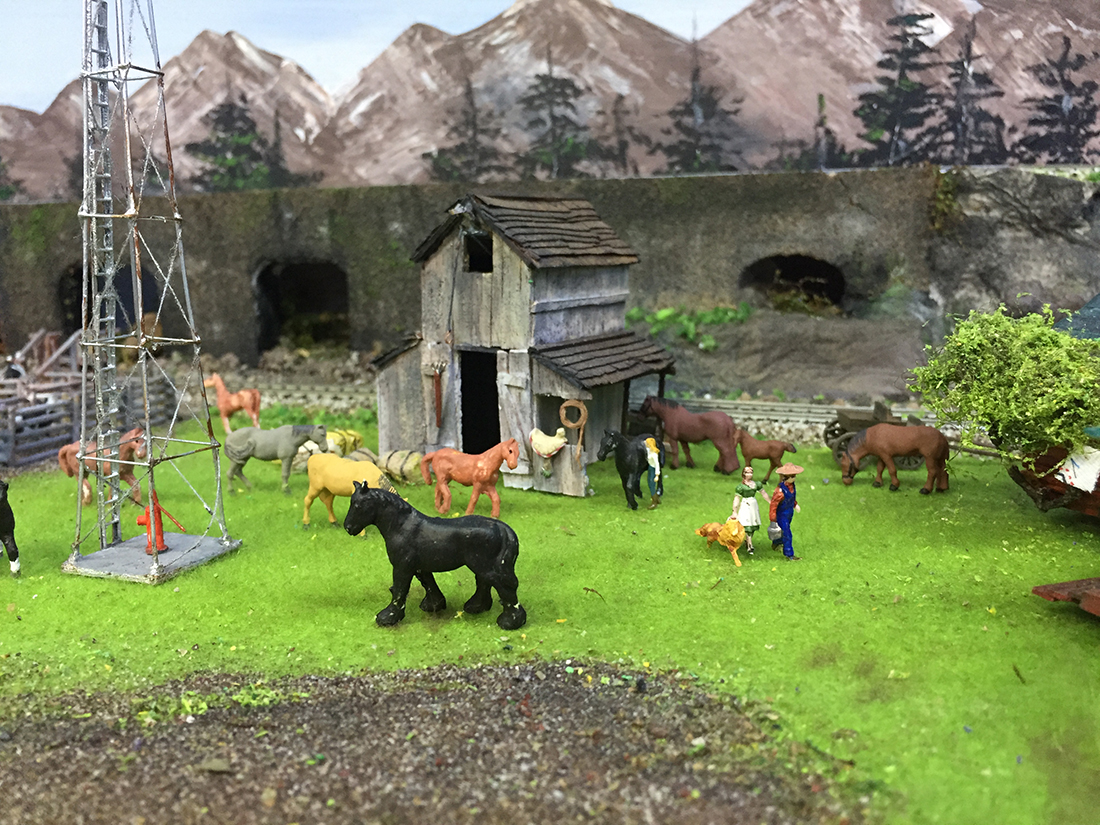 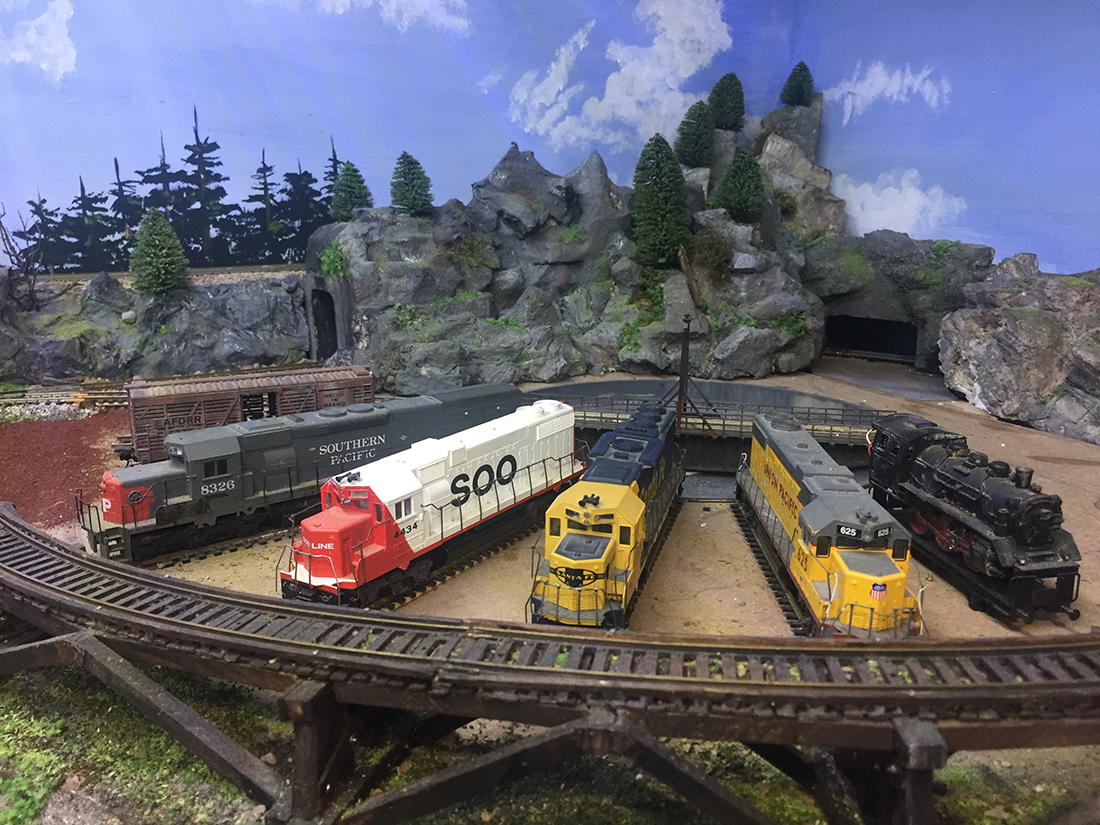 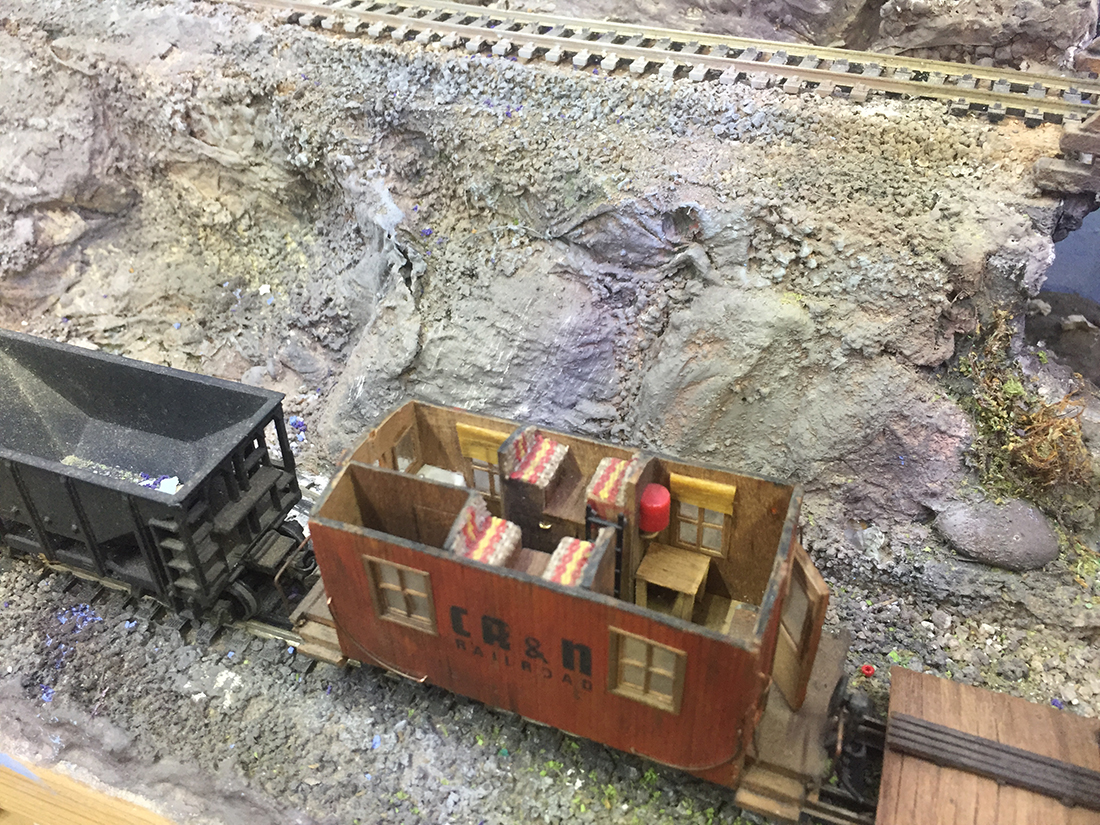 A huge thanks to Ernesto – I do enjoy seeing layout from all around the world.

And thanks to John too, for sharing his N scale EZ track, he has hit the nail on the head with his ‘Pizza Pye’ track plan. What a fab way to start!

And don’t forget the Beginner’s Guide is here if you want to make your start.