Lawrence has been back in touch – he’s “finished” his O scale track layout.

But if you want a bird’s eye view, his track plan pics are here.

I am answering a couple of questions asked from one of my previous up loads to you. This is in reference to my lift up bridge.

I am running four train lines for O scale DC (not DCS). I am using four separate transformers for this, one for each track. 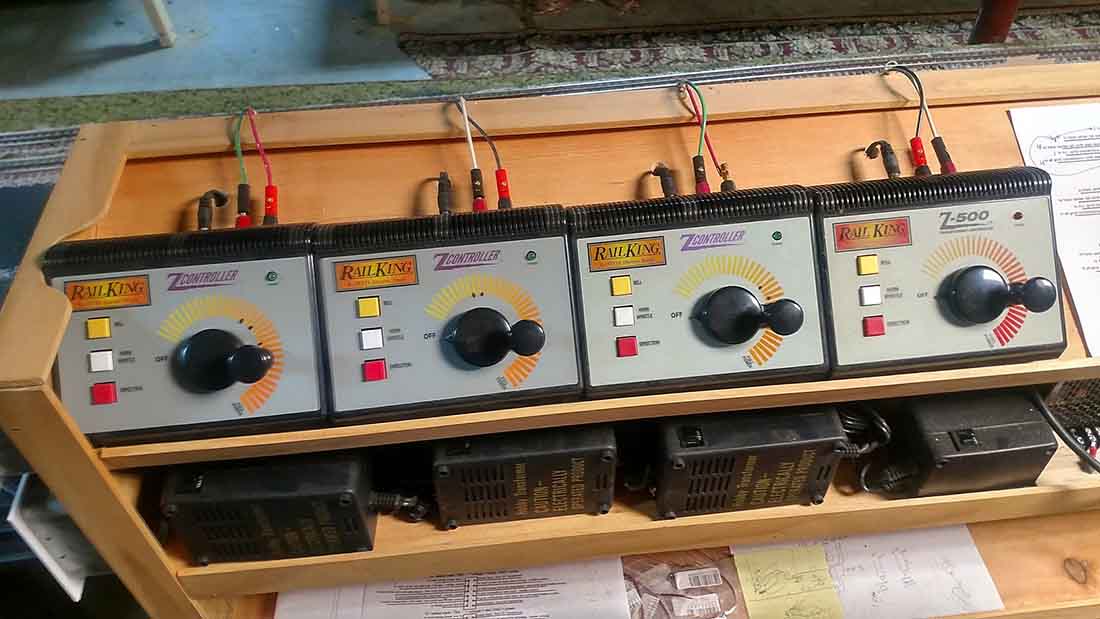 (BTW – I refuse to work on a layout wider than three feet and to work the wiring from under the layout.)

The cable housing, I am using for the power distribution is the same stuff I used when building electronic cabinets for major companies before I retired. It is a flexible split one half inch housing used for cable lines. 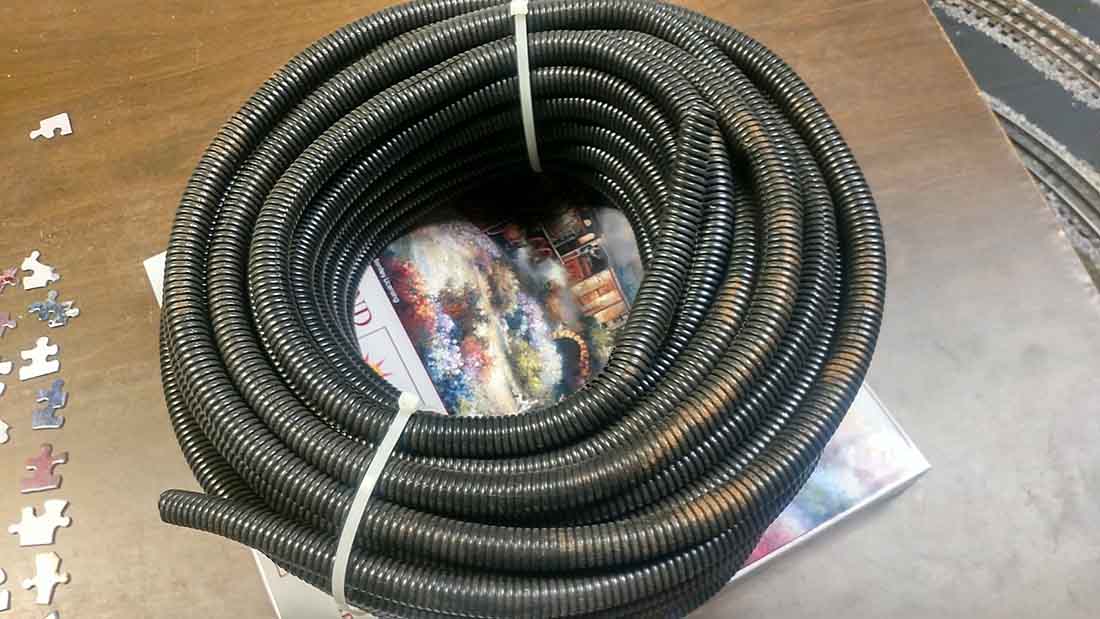 The wires for the distribution are all 12 gauge four colors. As you an see from the outputs of the transformers (picture 1) and at the cable distribution connections (picture 3) the red and green (tracks 1 & 3) and the black and white (tracks 2 &4) are for each track. One red/green and one black/white pair runs in each cable housing.

All the cable runs are on the facing on the side of the track. All the drop wires are pulled forward from under the track and are connected to the power distribution on the facing connections. 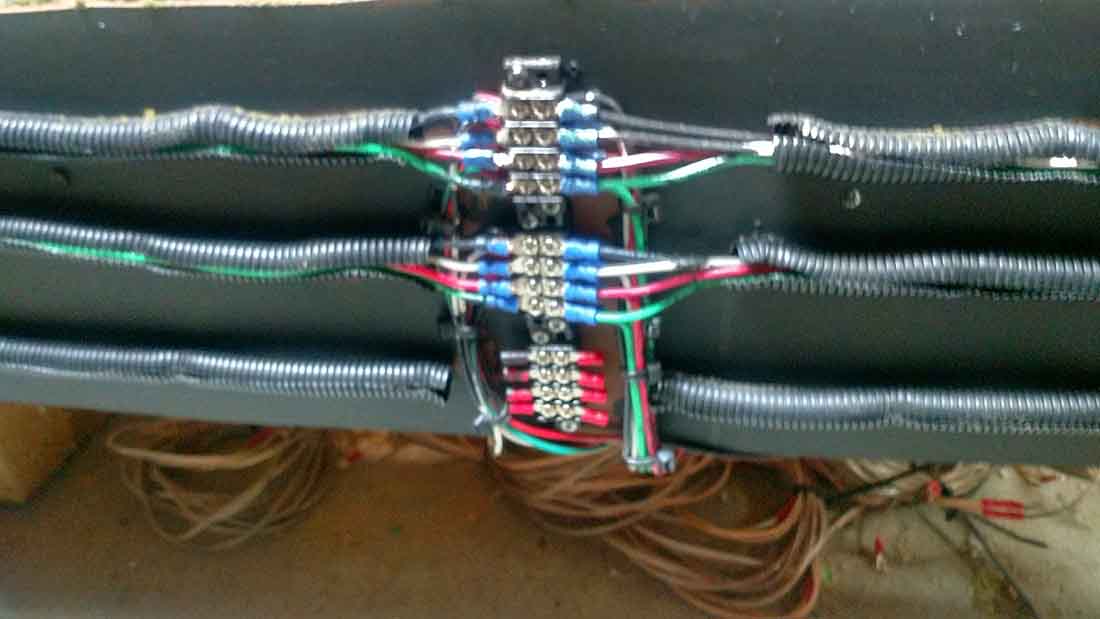 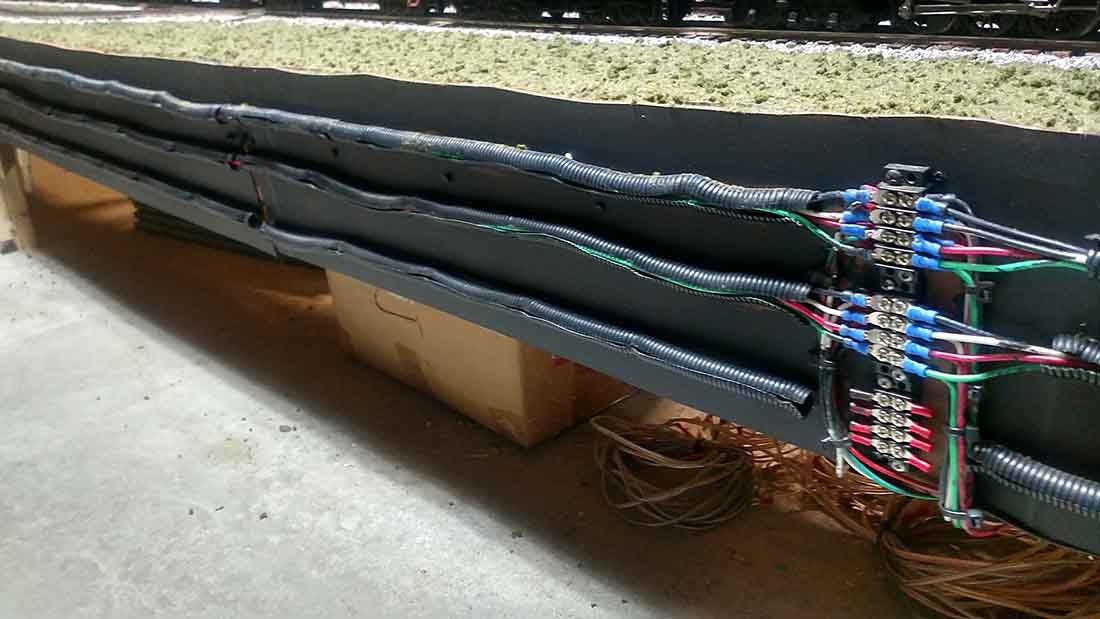 Picture 5 displays the power connections from the transformers to one side of the track and to the lift bridge itself. 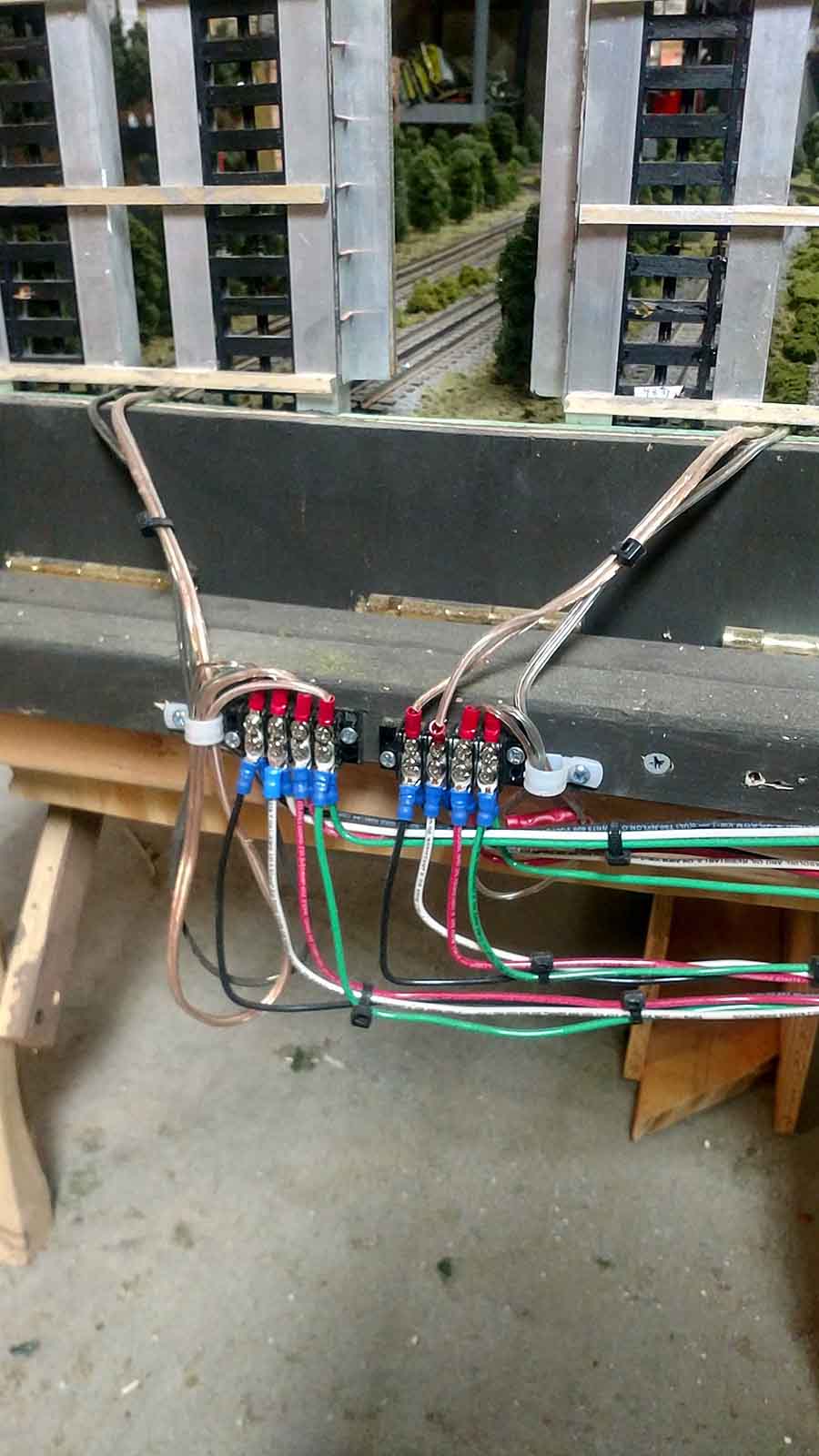 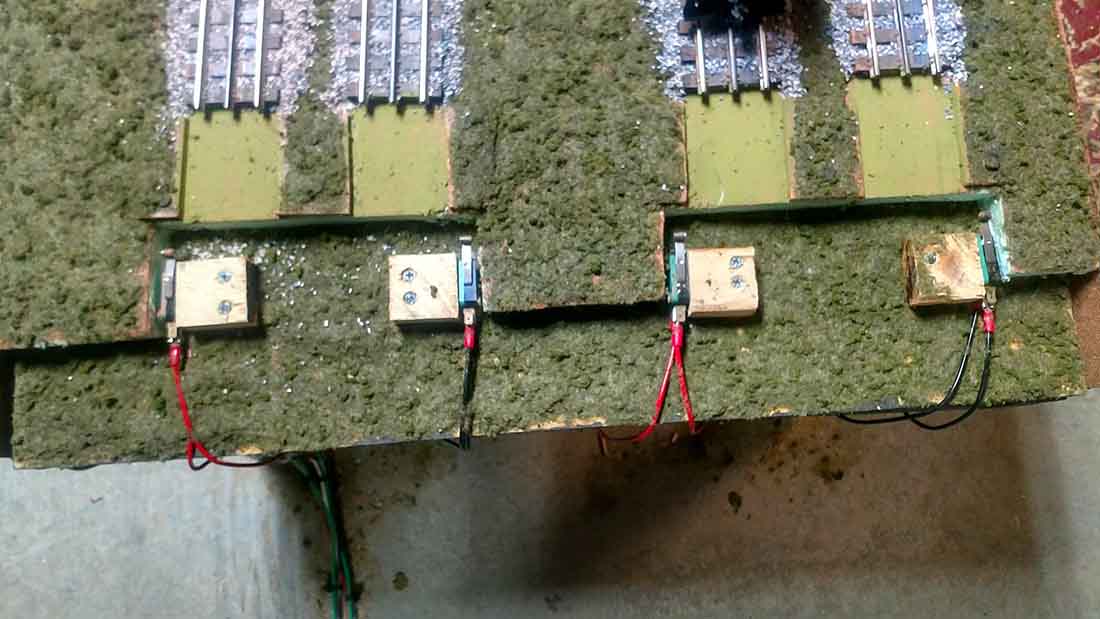 NOTE: when testing this method – run the engine (only) slowly toward the open bridge and stand next to the engine to ensure the train stops before getting to the end of the track. Then rerun the engine with the bridge down and the engine should run across the bridge normally.

Is a layout ever finished? And even if it is, you can always start another one, which is exactly what Lawrence has done.

He’s decared his O scale track layout finished. I know this because shortly after the above, this landed in my inbox:

My O scale track (at a level of 18” of the floor) has been DECLARED finished. I know you can always add more stuff to a layout. But as they say “enough is enough”.

The problem of seeing the O scale layout with the HO above it is solved by the addition of LED string lights attached to 1X2s under the HO framework.

The second two pictures display the 1X2s with the string lights attached. Not too worried about the wiring here as this is the only wiring that will be located under the framework.

Lever-nuts was used to connect all the wiring, VERY EASY to use and rewire as needed. LED lights do not light if wired backwards. Lift up the levers, switch the plus and minus between the two lever-nuts and close the levers. Lights now working.

With the sheeting on the framework the O scale is very dark and hard to see. But I am using a computer power supply for my DC accessories. Turning on the lighting for the 12VDC LED strips shows up the O scale layout nicely as shown in the last picture. 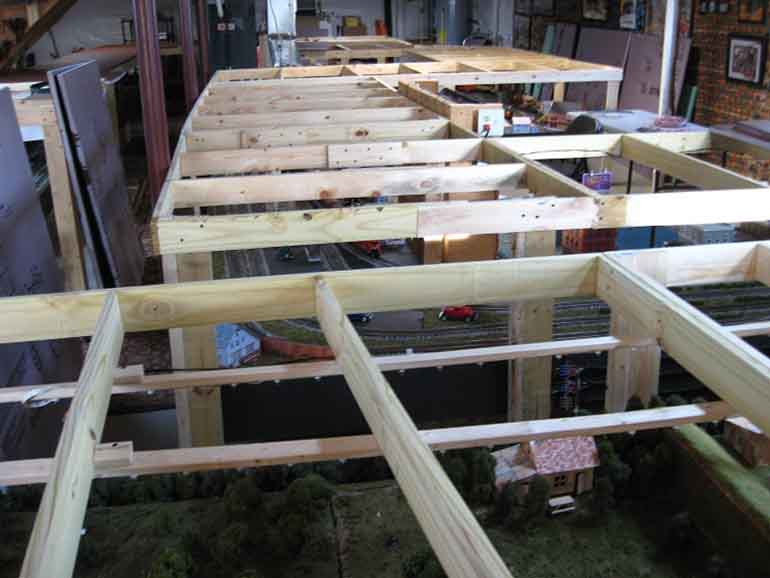 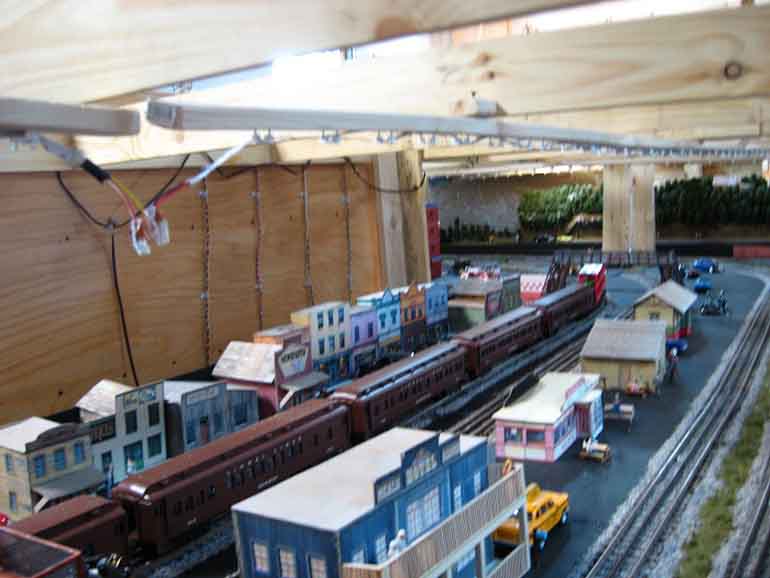 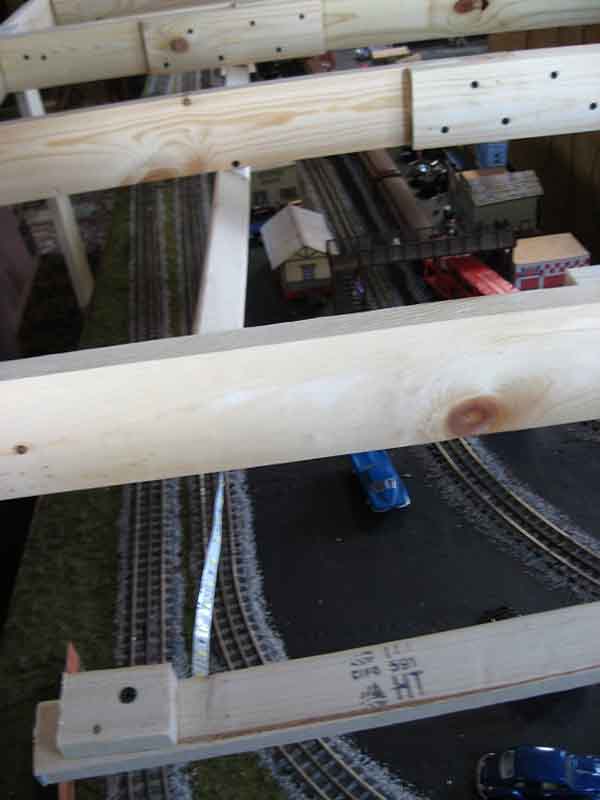 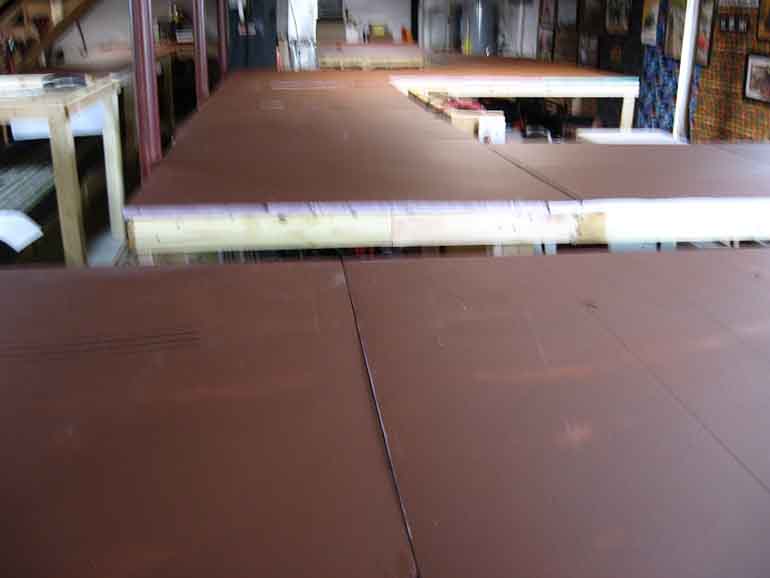 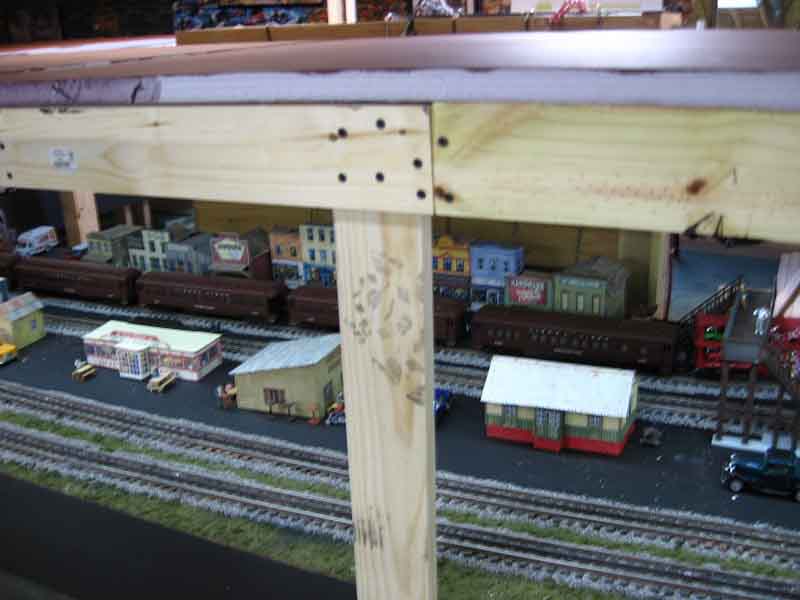 A big thanks to Lawrence for his O scale track layout. I do enjoy seeing a layout from start to finish, so I’m really looking forward to his new layout updates.

And don’t forget the Beginner’s Guide is here if you’re tired of sitting on the side lines.