Peter’s been in touch again – if you missed his last post, it’s here.

Peter here. Been a while but some progress has been made. As you know model railroading has many facets, i.e. scenery, track, running trains, photography, electrical etc.

I’m sending 18 or 19 pics with brief explanations and how I’m progressing, starting with brass engines I’ve modified, painted and decaled, to combining both standard 2 rail O scale with On3 narrow gauge together.

Pics 1 through 8 are modifications and paint jobs.

Pic 1 is how I received this GP 40-2, nice factory paint, but not my road, so pic 2 is the stripped and finished model of Rio Grande, with soldered on added details to that particular road. snowplow, horn and antennae arrangement and other details. 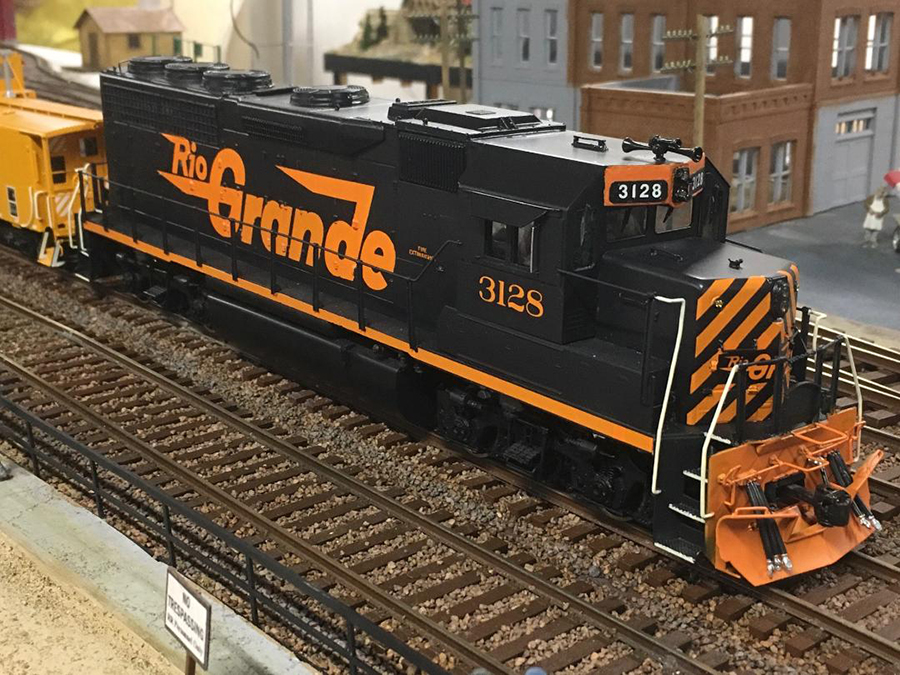 Pics 3 through 6 starts with a generic GP-9, Lot’s of work here.. As you see I had to convert the two 48 inch fans on top with four 36 inch prototypical fans.The dynamic brake fan in the middle was in the parts bag, so I just attached it.

Most parts came from Precision Scale Co. They have all the diesel and steam detail parts any one would want. But they still need to be soldered on correctly, There are rerail frogs added, and most painstaking were the spark arrestors I had to make from brass from scratch because these particular ones are not available commercially. 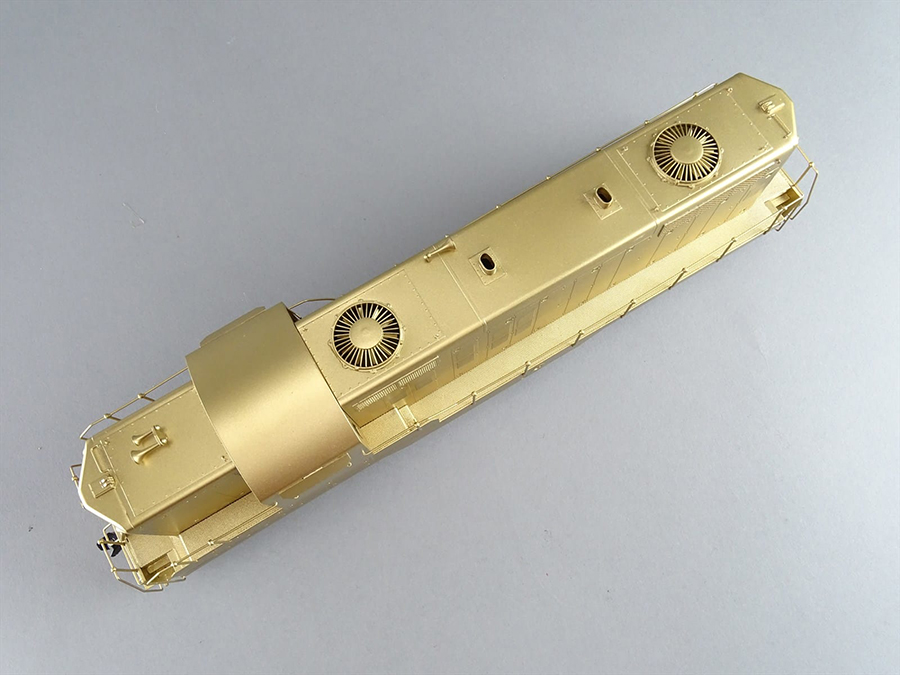 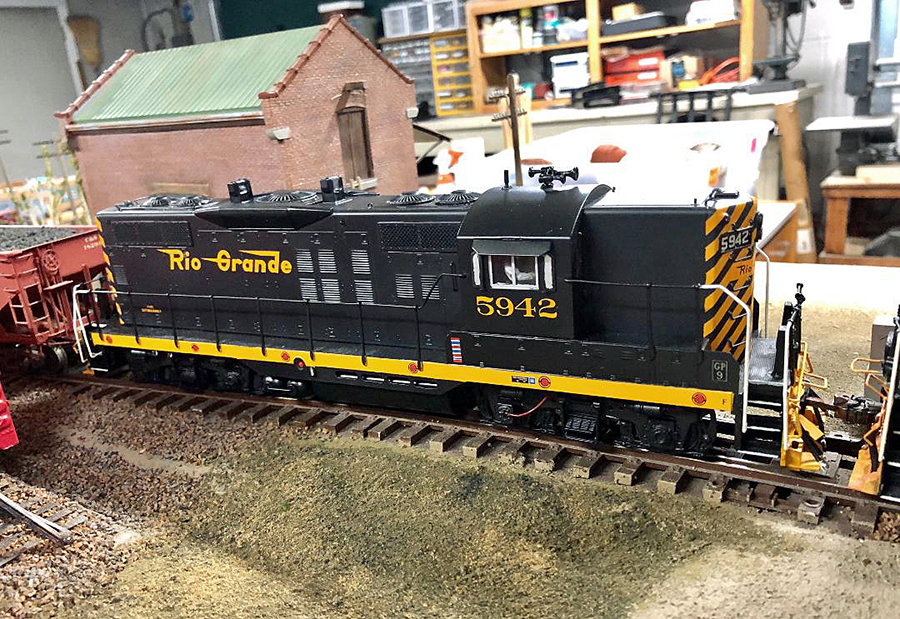 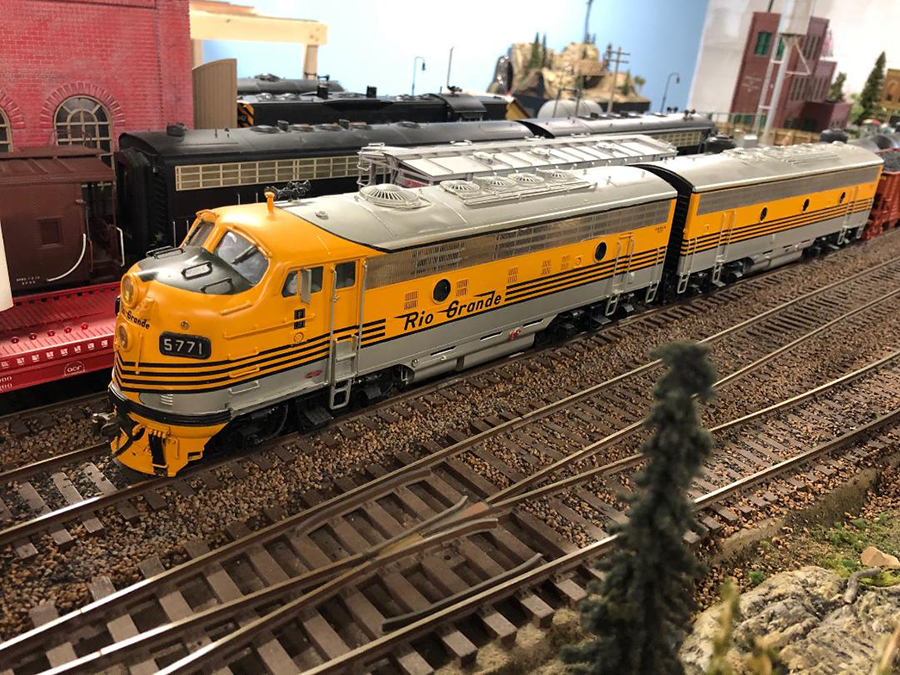 Pics 7 and 8 are Brass train paint jobs I had done a while ago, but very happy the way they turned out; F7 A & B and the 4 stripe caboose.. 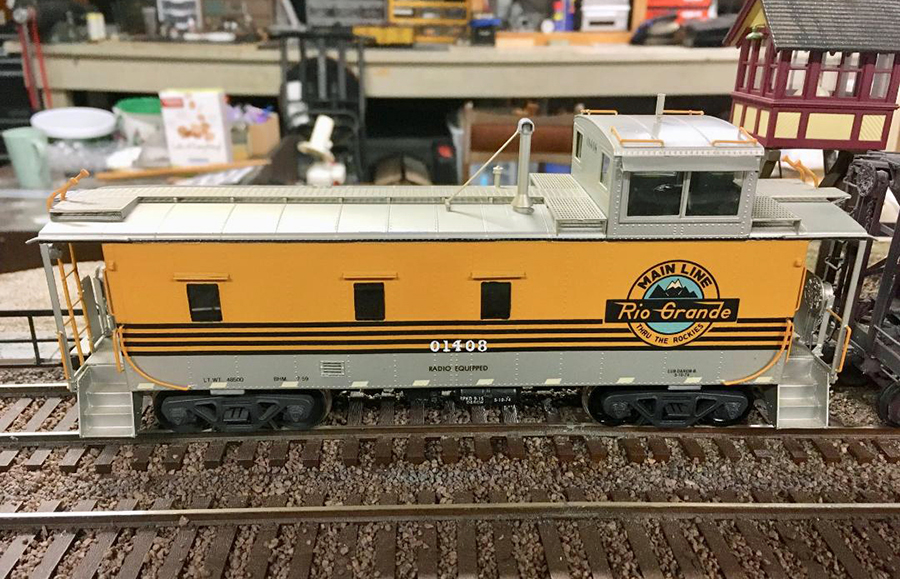 Next the tunnel work how to and how I’m combing the two gauges. I appreciate you posting both of these in succession.

Pics 9 through 14 (2) show the tunnel I completed as it curves around to go under the narrow gauge which is against the wall and curve out on the other end eventually. There’s an aisle between the two gauge layout so one can operate either or. 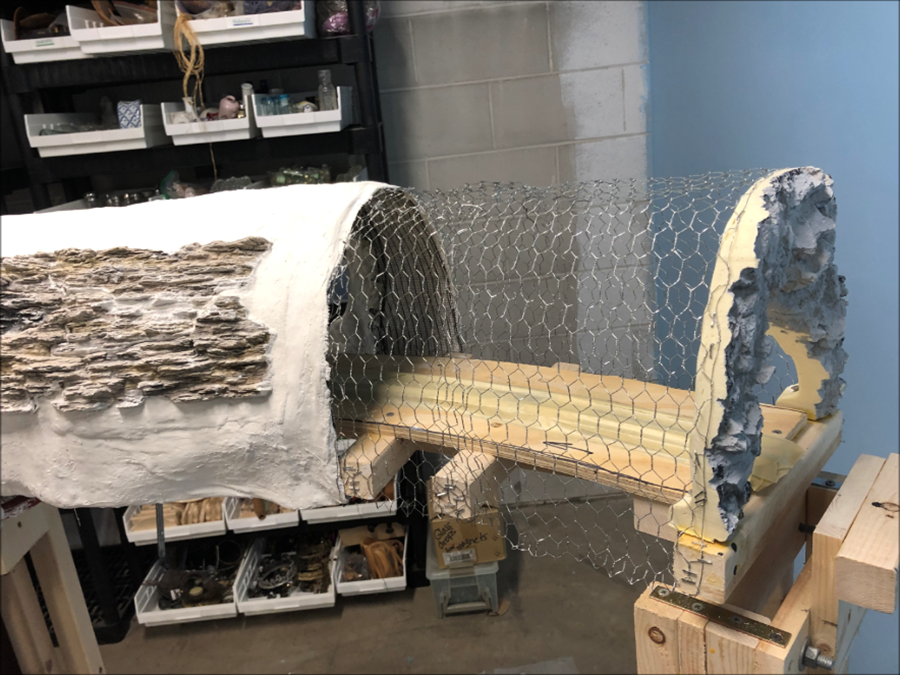 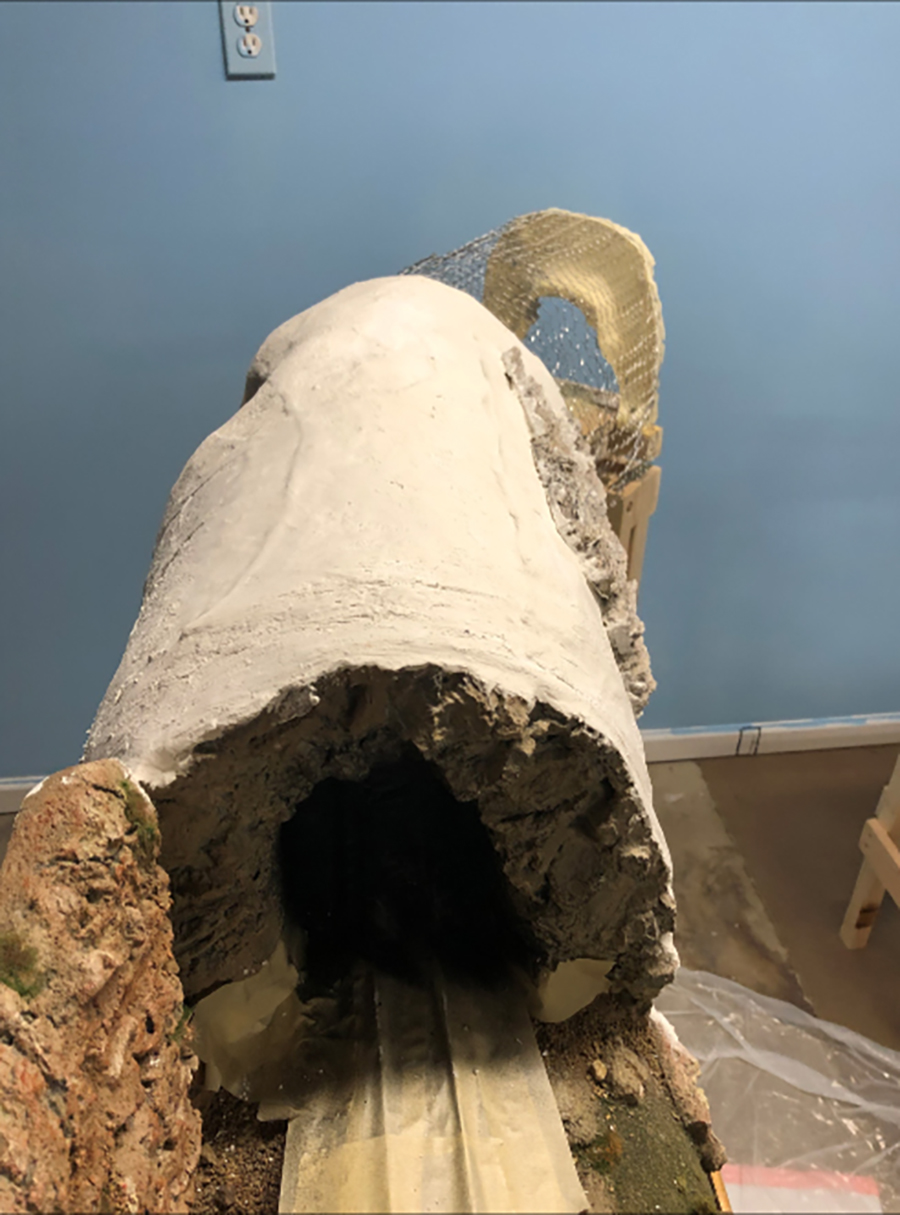 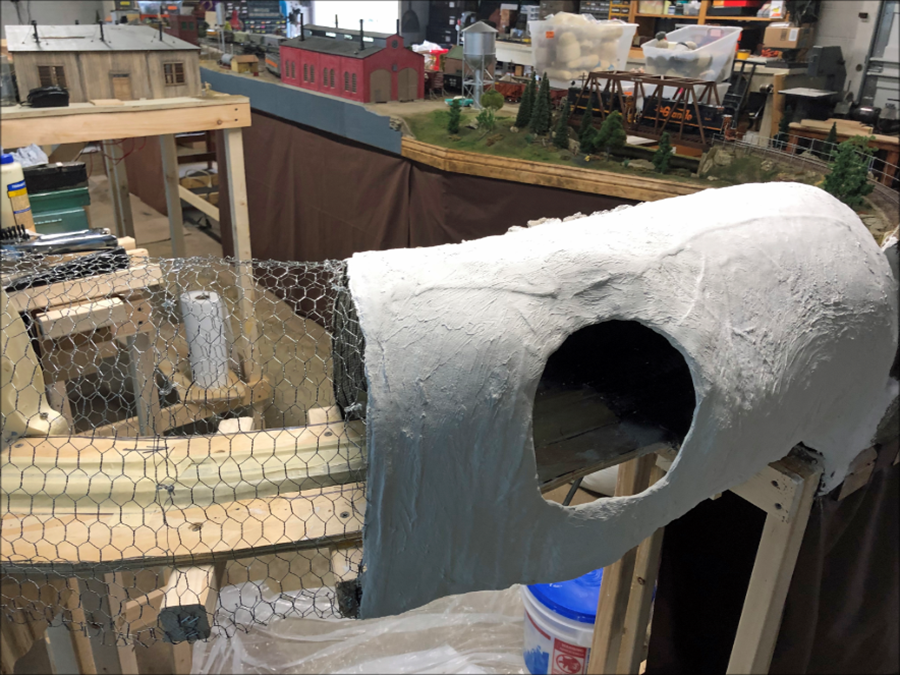 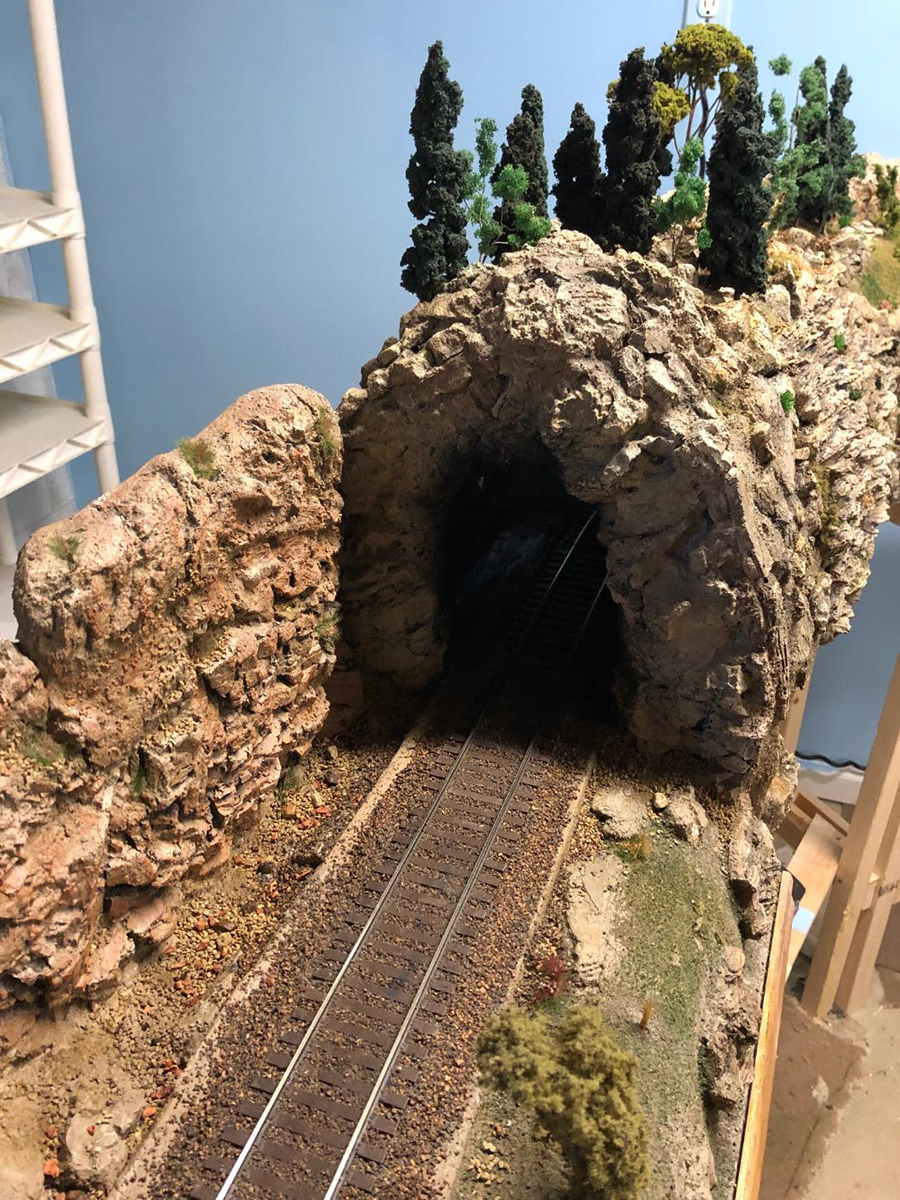 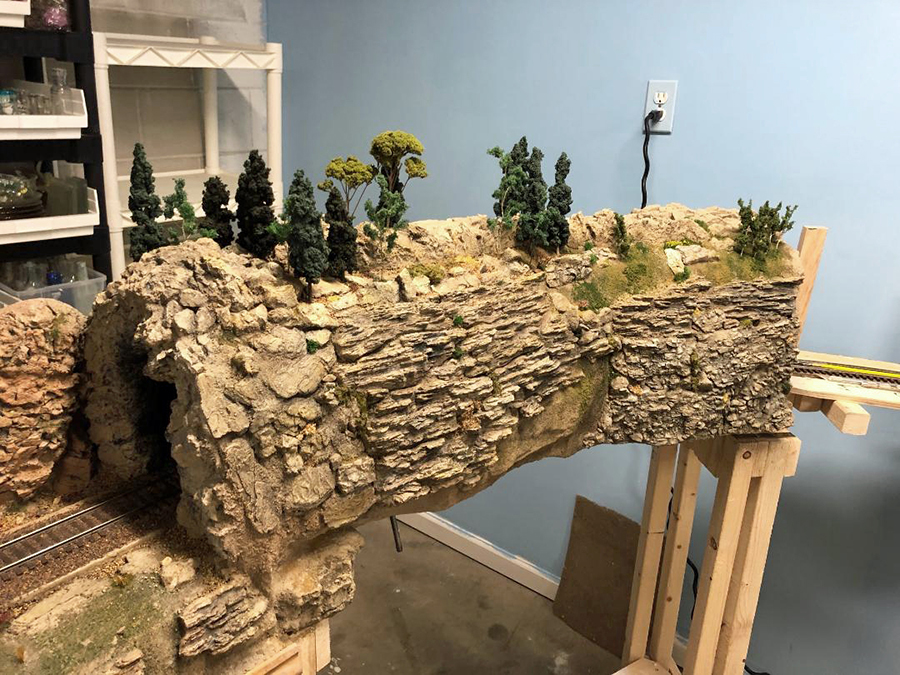 The portals are commercial products cut down and I used the excess on top of the tunnel. I either used rubber rock molds on part of this and smashed up the dried excess for boulders. The rest as in the side are woodland scenic ready rocks placed in combination to suit my eye.

I used a floral type chicken wire which is light and pliable to form the tunnel in sections because of the curvature of the tunnel itself. Then, plaster soaked gauze is next with ready made drywall plaster that comes in buckets from any Home Depot or Lowes.

I don’t mind mixing hydrocal for rubber rock molds, but for bigger areas I would suggest getting the ‘Mud’ or drywall plaster because it not only saves time and mess, it goes on smooth. 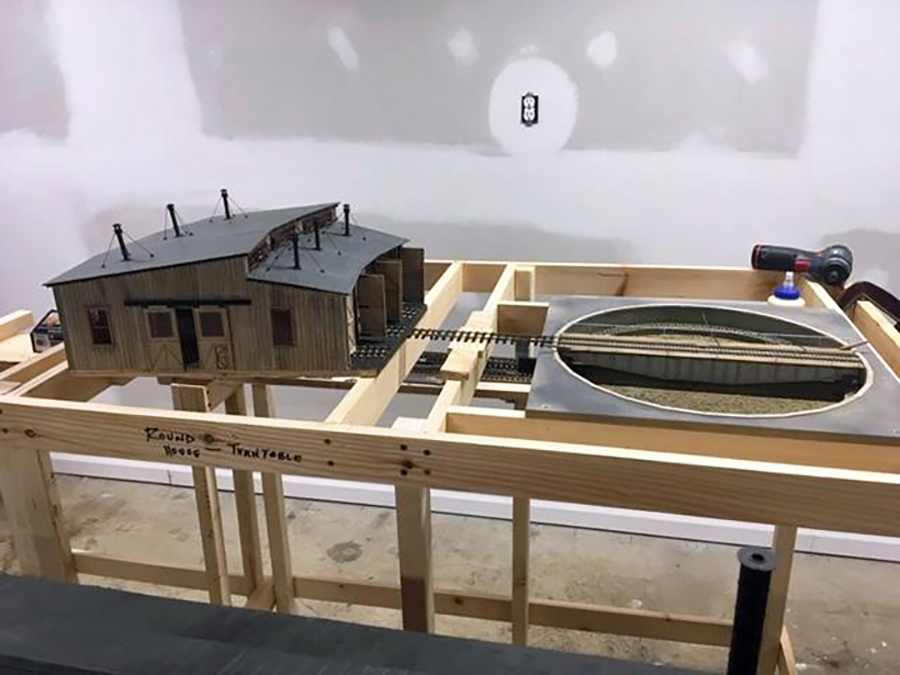 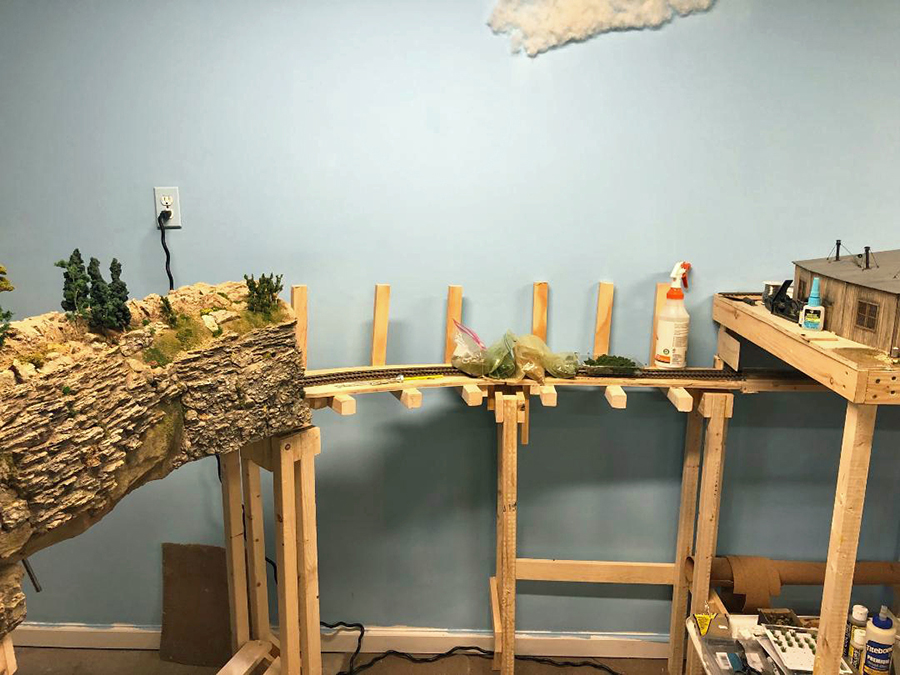 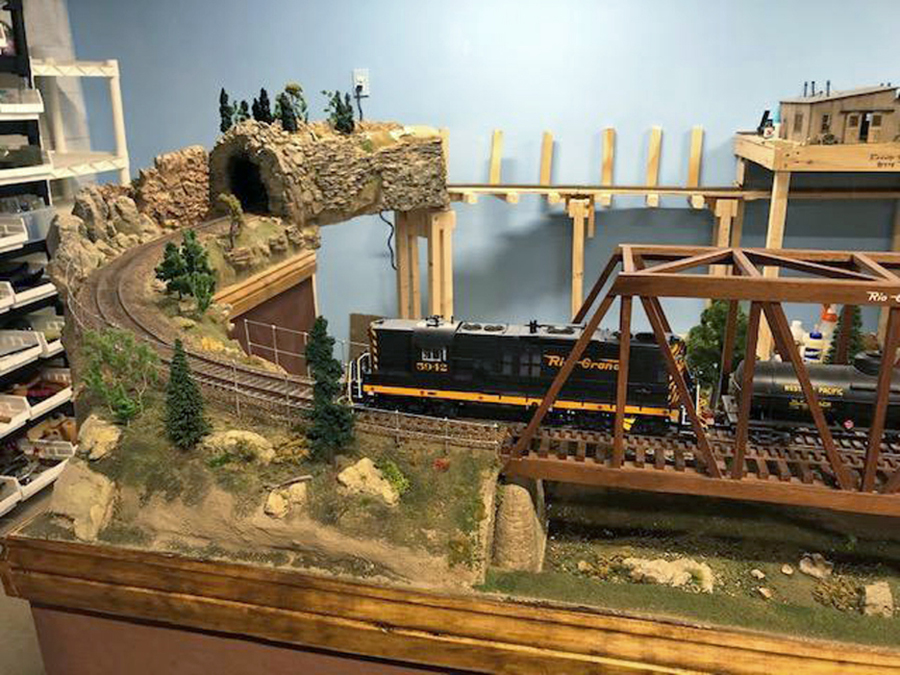 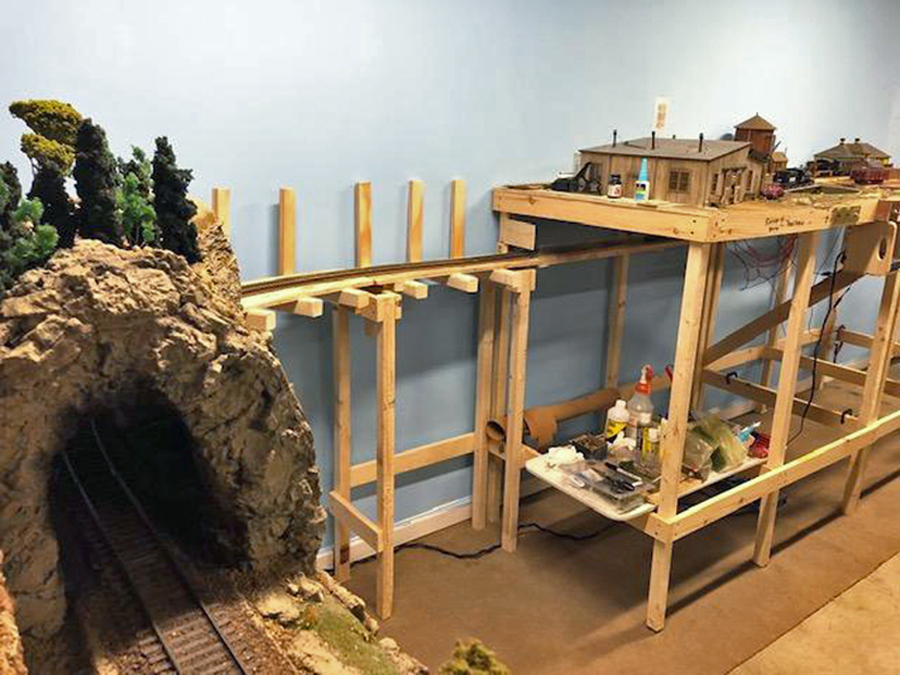 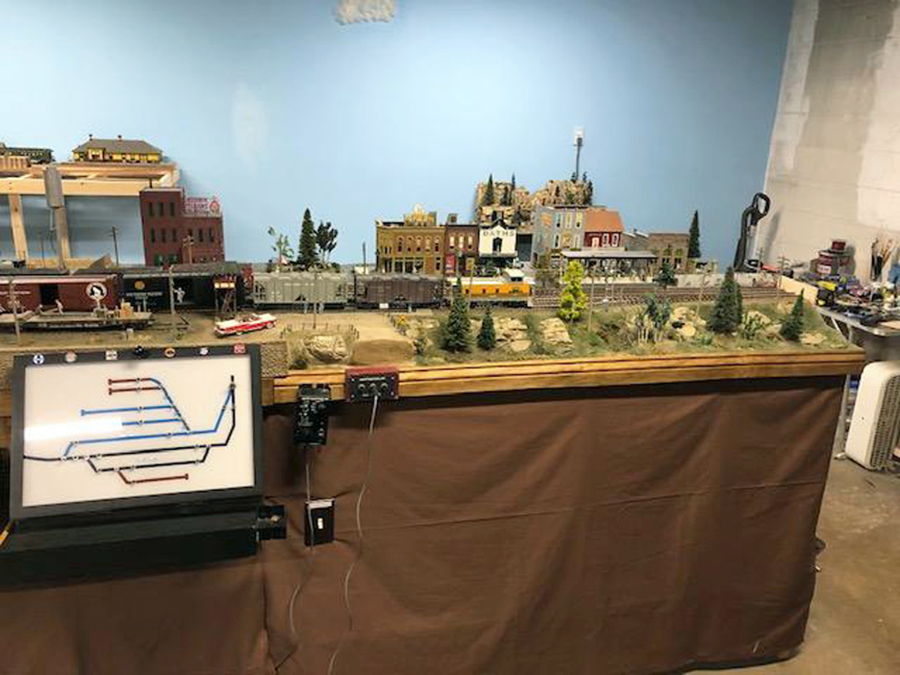 Pic 14 shows how the standard gauge with curve under neath the narrow gauge. There will be a back ground against the wall eventually.

Pics 14 through 18 show the start of the narrow gauge, eventually this will lead to Rio Grande Southern wooden tresles etc. (later) 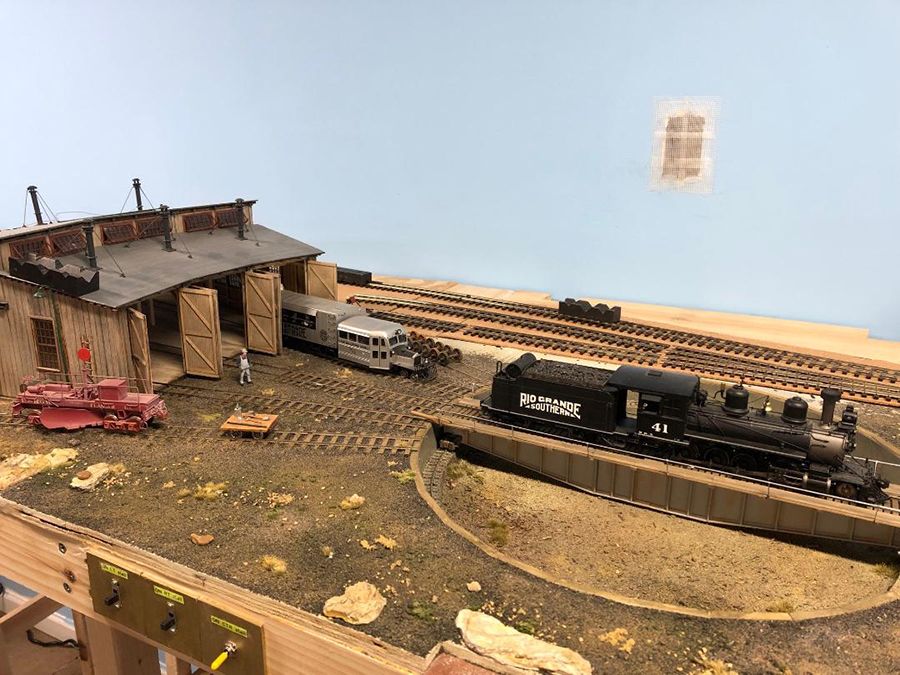 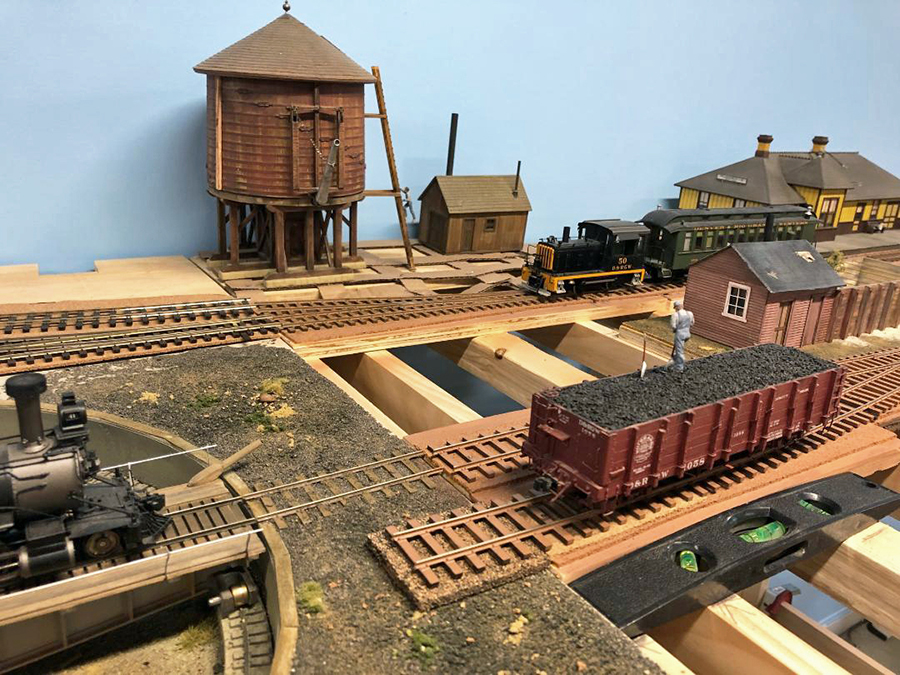 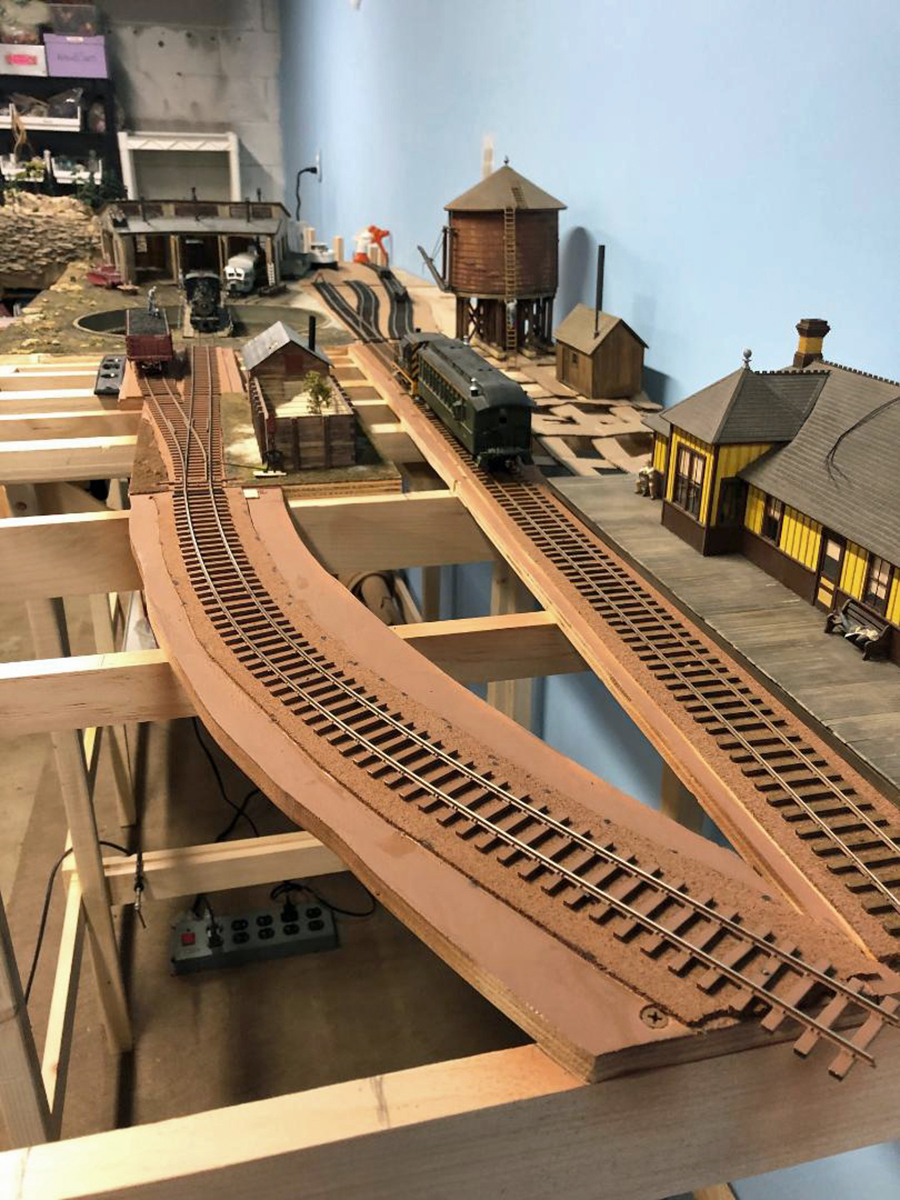 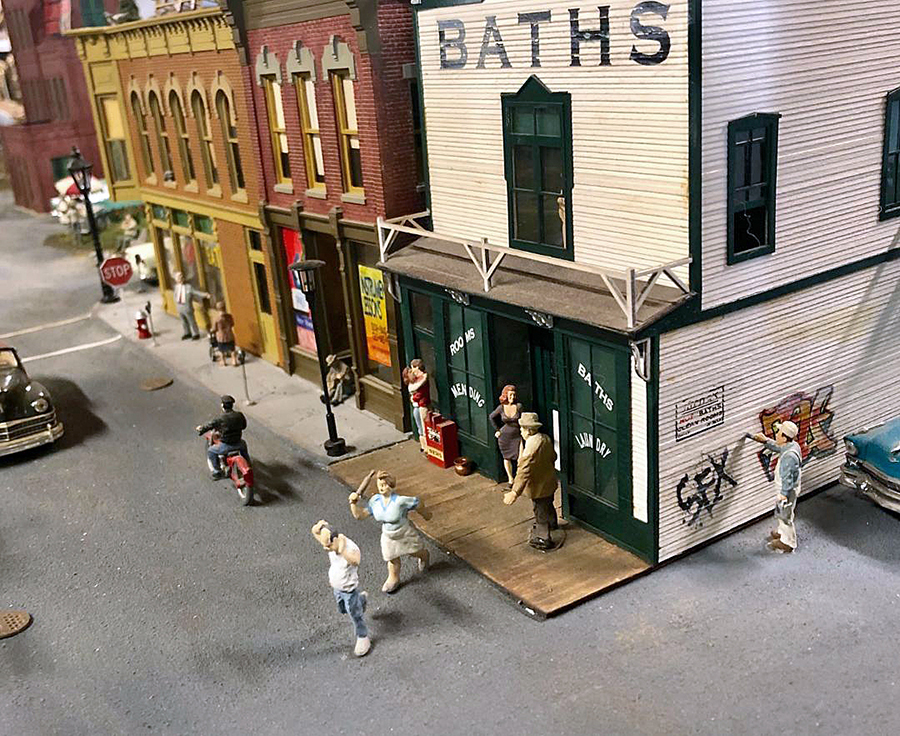 Pic 18 is a shot of the town in the standard gauge where Mrs. Thorkle caught her husband at the bathouse (ha ha).

TY Al and hope all is well with you.

“Hi Al, just had a day up on N.Y.M.Railway, enjoyed seeing the City of Wells… one of the Battle of Britain Class Loco`s… and our own Repton running up there, made for a good day out and a bit of nostalgic Steam.

Nice to see a bit of real steam still in operation.

Loved seeing Peter’s update – it’s amazing how much charm his layout has. Can’t wait to see the next one.

And don’t forget the Beginner’s Guide is here if want to stop dreaming and start doing.