Train layout in a shed

Ian’s been in touch – he’s shared his train layout in a shed:

My interest in trains started at the age of 6 yrs.

When I lived in Great Torrington, my father use to take me down to the station where I spent most of my time taking train numbers ( don’t ask me why).

During that time I got to speak to many engine drivers as well as the fireman. It was because of this that I was offered a trip on the footplate on the Petrockstow line.

Could you imagine that happening now especially with the so called Health and Safety rules.

I was hooked. It was then a built my first Tri-ang analogue layout.

After years of moving around Devon, Dorset and Norfolk I married a Weymouth girl whose father happened to be the Weymouth Station master and the second layout was built. This time it was digital, a train layout in a shed approx. 18@x15’ and was a very complicated layout.

About 3 years ago we moved house which had a long but narrow garden, once the house was in some sort of order a shed measuring 14’x10’ arrived on Nov 2020 somewhat smaller than I wanted.

Rob our electrician was summoned to wire up the shed on one condition that a cup of tea and a visit to the model railway construction was in order should any work be undertaken in the house.

I had an idea as to how the layout should look so first the baseboard was constructed using 3/8” ply and 3”x2” legs which would support my weight, the base width itself was anything between 24” to 36” which gave me plenty of room for the marshalling yard etc.

At this point a second base board was added underneath this ran the full width and length of the shed to incorporate a single track eventually ending up under the control board with four siding fiddle yards, entrance to the fiddle yard is via the tunnel nearest the wall.

Inclines of 1” every 24” were made of ply/hardboard and covered in cardboard, mod rock and a thin layer of Polyfilla to give the rock effect.

Once the inclines, tunnels and bridges were in place and the whole thing wired up to the control board I ran several trains with various rolling stock to make sure of any mishaps.

Next was the Faller car system which I had from my previous layout, as you can see from the video the little VW Camper van run really well sadly only enough room for a single track.

Access to the shed was made from a sliding section 18”x24” (I hope I don’t put on any weight) which can be removed and stored when required, ballast and scenery were next on the agenda, buildings placed in various positions to give me some idea of how the scenery was to be created.

Two sections of the hills can be removed for easy access should a train become derailed, the first is behind the garage the second is in front which allows me to clamber up onto the base board to get to the far corners if required.

Only a 3rd of the scenery is partly finish if ever it is, I don’t want to shut myself in the shed for the rest of my retirement, so I joined a model flying club something I’ve always been interested in.

I’m not a model train buff and I’m sure some of you will look at the layout with disapproval especially the way the building etc are placed but to me it’s the way I see it even if some of the engines are pulling the wrong rolling stock, it’s all in the satisfaction of scratch building and running the trains achieving something on your own. 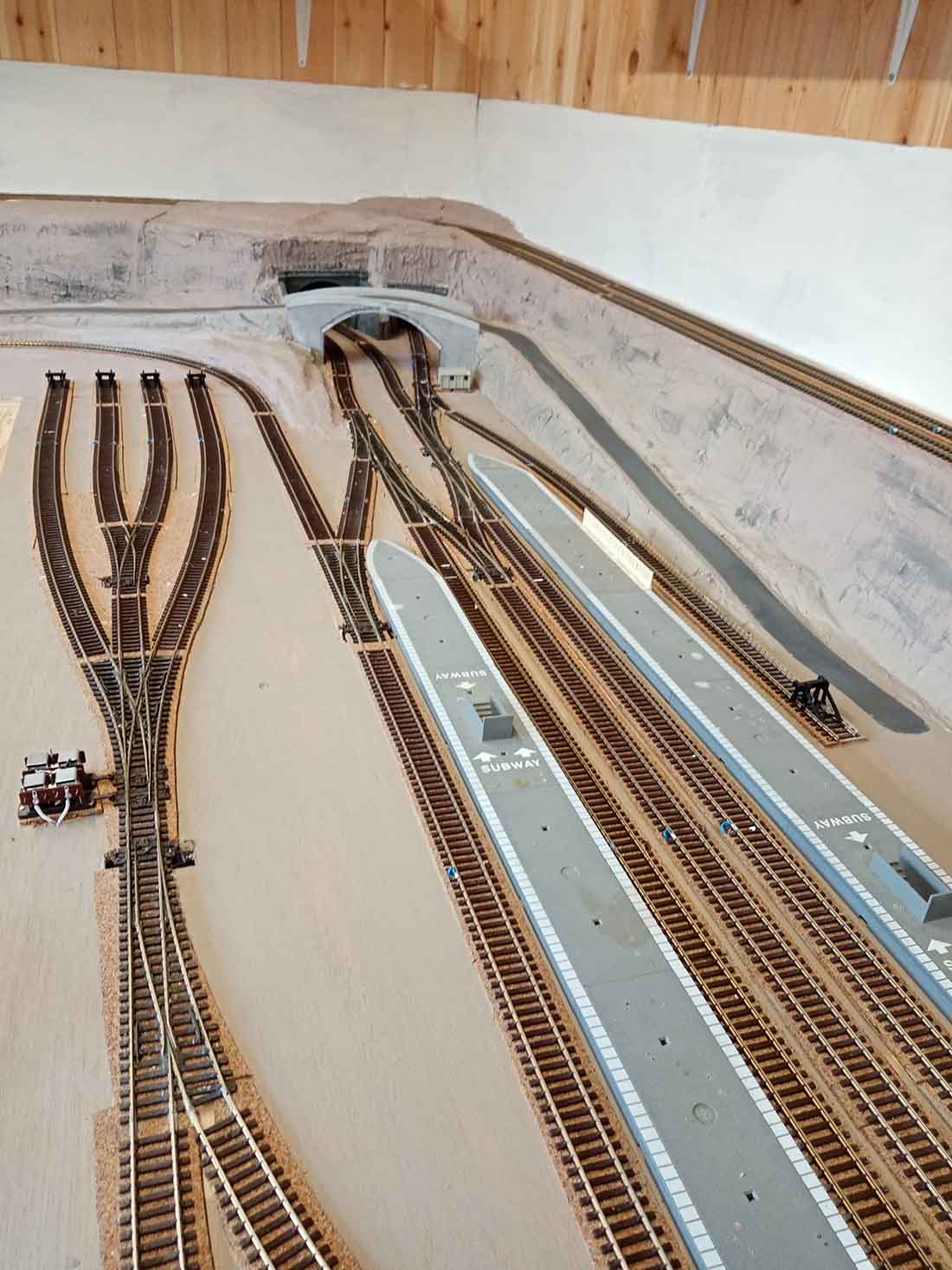 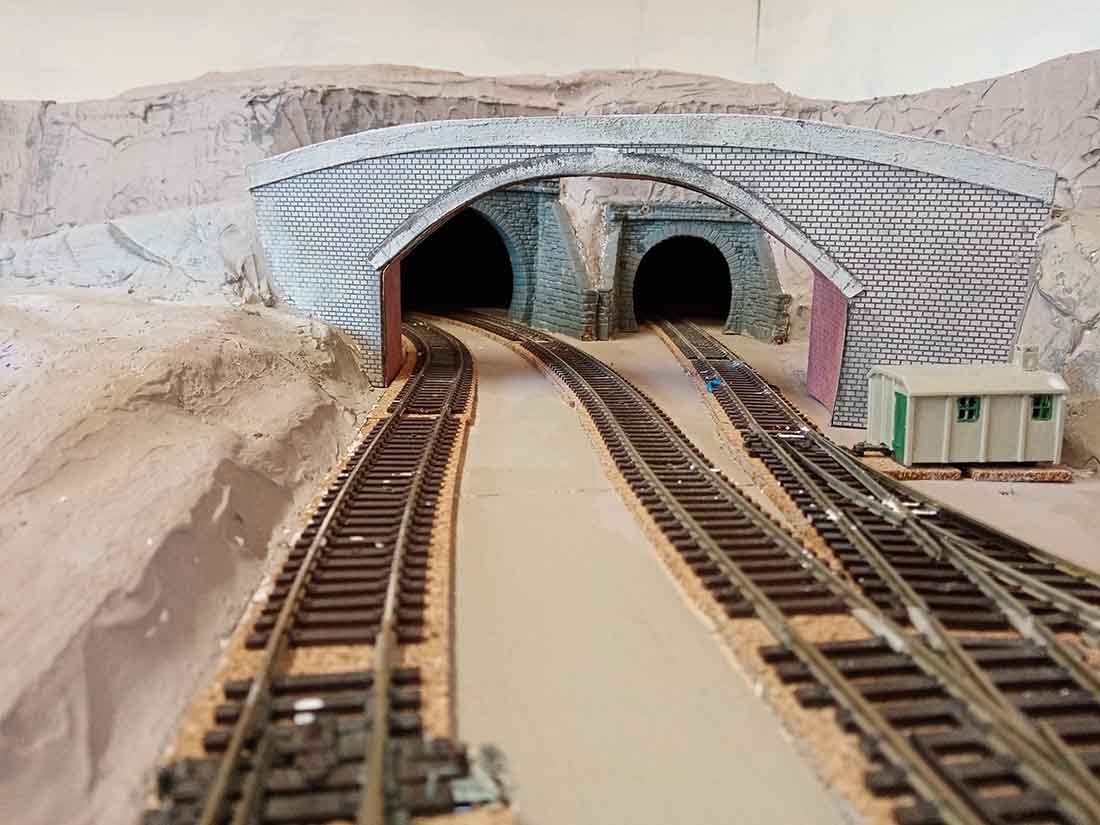 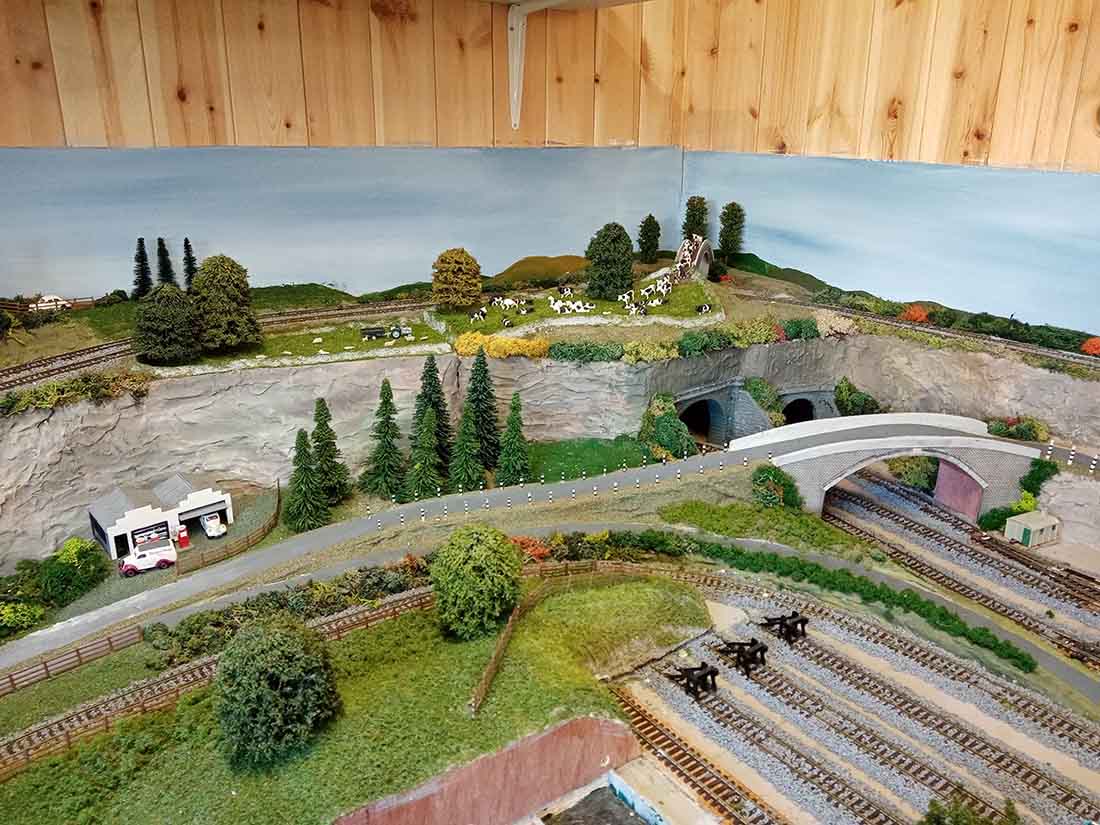 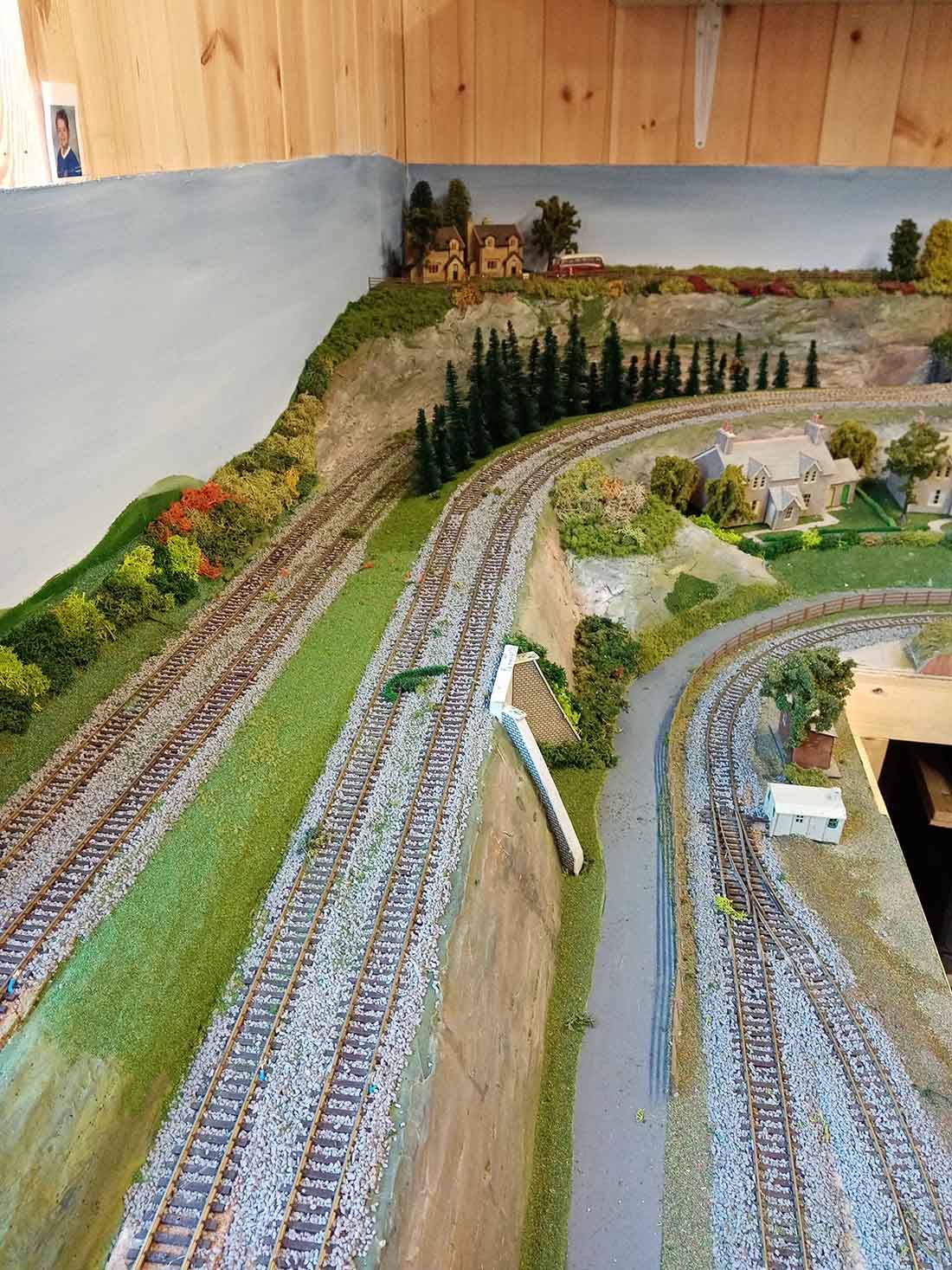 There’s been quite a few train layouts in sheds recently – a simple way to get your own space. And think of the peace and quiet…

Next on to Dan, who has been busy with some of the printable buildings:

“You will recognize most of this stuff as much of it is yours.

The 3 sided tower covers the drain from the kitchen and has windows from the building next to it.

As this is somewhat distant I did not do the relief that John recommends. Great to do while watching football (not soccer) playoffs.

Greenery and other landscape treatments will finish it off. But first I have track work to do.

Have a great balance of the day.

Now on to Bill who has a question:

Thank you for all the posts! I read them every day and save most of them for future.

I decided my first effort would be a conservative 4 x 8 early twentieth century California Sierra Mountains logging operation with two connected tracks in HO scale; an upper/inner logging track bringing rough cut logs down to the mill and village where they would be cut and loaded onto flat cars for transport to “market” on a larger mainline.

I have completed the bench work and laid out both lines, but now I am losing some confidence. My lower mainline should be fine with 18” radius and 2% incline/decline, but I’m more concerned about the upper layout. I have designed the track on a 12” radius with 3% to 4% incline/decline hills. My intention is use a small loco, x 6 x, or Shay at slow speeds pulling three or four logging cars. Am I destined for continuous frustration with derailments using this tight of turns?

Thanks in advance for your input.

Please leave a comment below if you can help Bill.

And if you want to start your model train layout, the Beginner’s Guide is here.

13 Responses to Train layout in a shed