A few photos of my 99% completed HOn3 Roundhouse with all the lights fitted both inside and outside. Maybe add a bit more detail on the outside and some more weathering (dirt) on the floor inside.

Next project connected to this is the installation of the turntable.

That’s all for now. 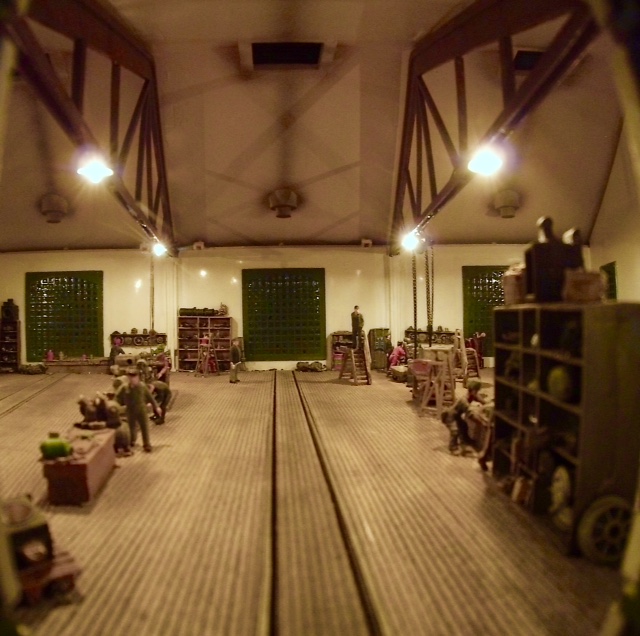 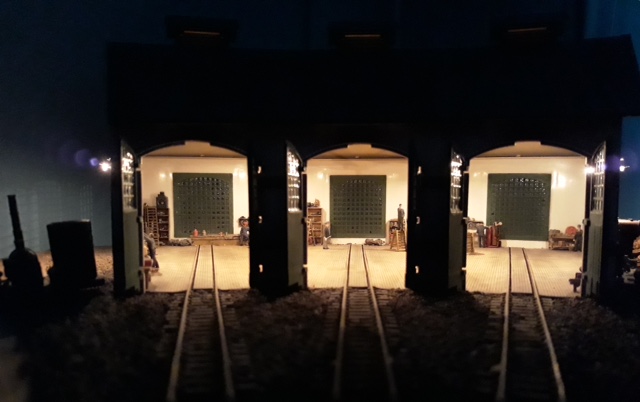 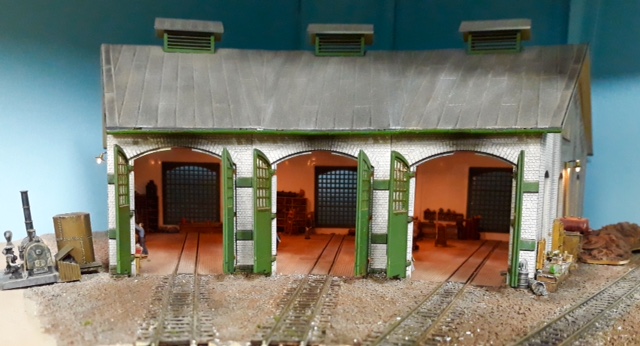 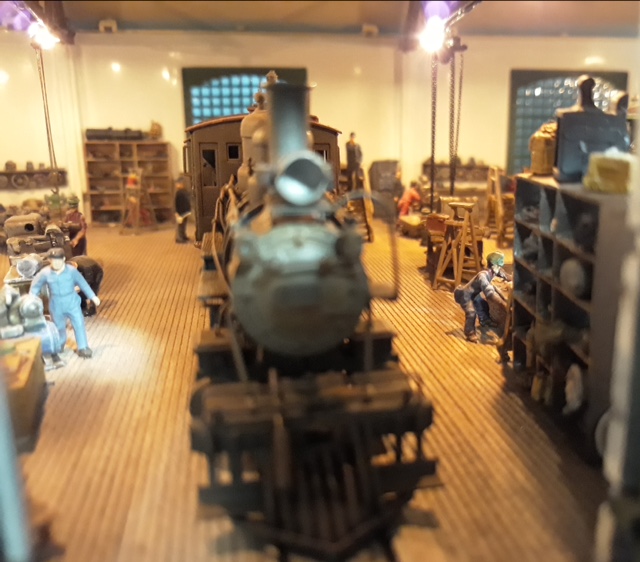 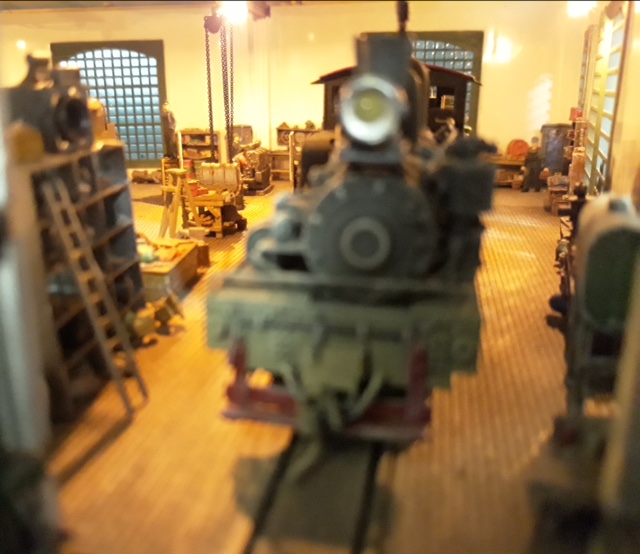 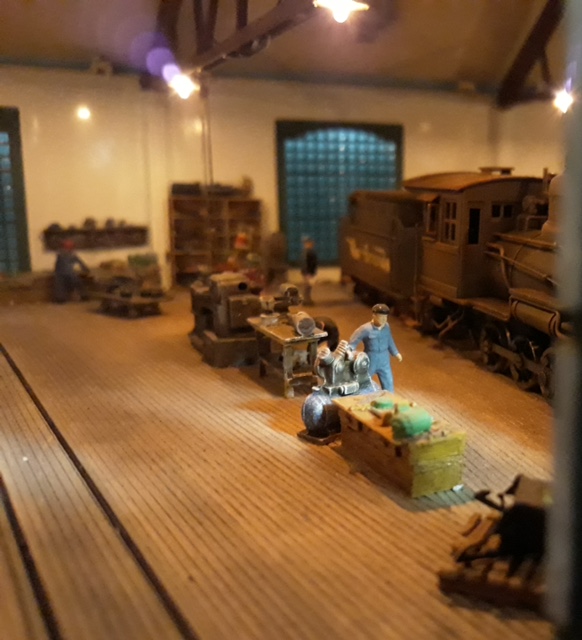 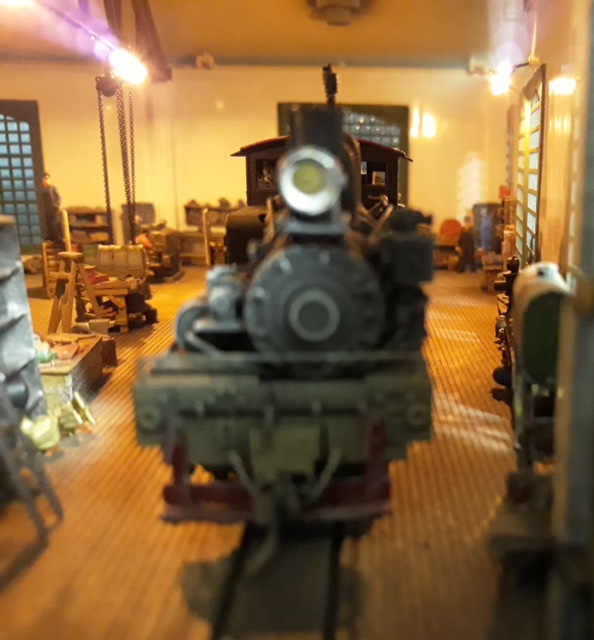 A big thanks to Brian – his last post is here.

Here is a little story about a brick from railroad lore and its travels before it finally came home.

In the early 1970’s I took my first professional post at Hartwick College, in Oneonta, NY (USA) which was also a major connection for the Delaware and Hudson Railroad, said by many to be the oldest running transportation company in the country.

It also claimed to have the worlds largest roundhouse, @ 52 stalls, completed in 1916.

As my dad was an avid railroad fan I took a trip down to the yards to get inspiration for a Christmas gift. Sadly, all that remained of the roundhouse was 14 stalls and piles of bricks from the original structure.

I decided to liberate a brick and took it downtown to Jim Konstanty’s sporting goods store (Konstanty was a baseball legend for the 1950 “Whiz Kids” of the Philadelphia Phillies.) to have a plaque made – “Brick from the worlds largest roundhouse etc” Dad could add this to his growing railroad china collection that he was amassing from US and international railroads. He wrote about many of those procurements in his autobiography, Scorekeeper for the Angels (2005).

Dad loved the brick and sometimes took it with him to his “Romance of the Railroad” talks he often gave. (Dad was a Methodist minister so had ample speaking opportunities.) The brick was part of his collection for 35 years.

Dad passed away in 2007 and in 2009 mother had an appraiser come to make an offer on dads collection of Lionel trains, railroad china, and memorabilia. I held back some trains for my sons and the 150th anniversary D & H dining service plate but totally forgot the brick. How stupid was that?

Fast forward to 2016. I was preparing for a long trip but was doing some research for my own model railroad. I had just retired and was looking forward to getting my version of the Delaware and Hudson up and running. When I dropped “Oneonta Roundhouse” into my search engine, up popped an eBay ad touting, “Brick from the worlds largest roundhouse.” I was instantly intrigued and when I clicked on the image, up popped an image of dad’s brick. I gave a HOOT that I am sure my neighbors heard.

I was hard pressed for time in preparation for leaving, and a total neophyte on eBay, so at the asking price of $59.99 I figured and hoped that the brick would still be there upon my return.

After my return I immediately checked on the brick, it was still there; “Phew !!” so I contacted the seller with the note ” I have the provenance for this brick” and I told her the story. She got back to me promptly and was delighted to know the story. I offered her $25, but she paid more for it, so she countered with $40, and I said: “done deal.”

The brick now sits on my desk in our den. Apparently, the brick had traveled from auction to auction and she said this item was the only item that interested her.

The auction was in North Jersey, an hour from my folks southern Jersey home. 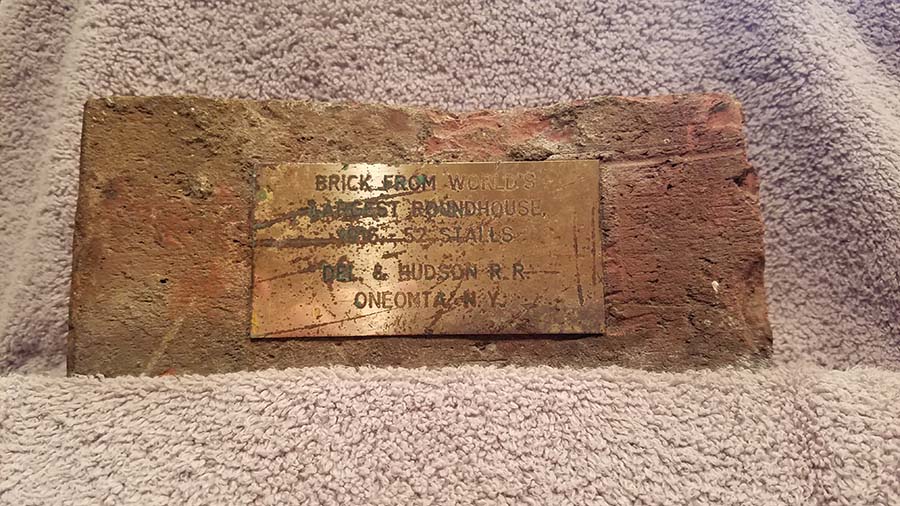 A huge thanks to Dan for taking the time to send that in – a wonderful story.

Please do keep ’em coming, and don’t forget the Beginner’s Guide is here if you want to start your model railroad journey.