There are quite a few portable model train tables on the blog.

But none are as inventive as Ewart’s.

I have been receiving your posts for the past 18 months or so, while I have been pondering how to give my grandson a model railway that can be stored in a small space, but expanded to a full 8x4ft layout.

I have been collecting some locos for him, and so far about 20 wagons of Hornby OO. He is nine years old and the equipment is new, but only DC.

I have purchased a full set of the track pieces, and the railway works ok on the floor, but it’s a bit of a nuisance for his parents having it there.

So, what to do? I researched portable model train tables and decided to build a railway that could be folded into its own layout requiring less than 10min to uncrate, and less than 5min to re-crate.

I purchased an 8x4ft sheet of 17mm structural ply and cut it in half to make two 4x4ft sheets. I turned the good side up for the lower sheet, and turned it facing down for the top sheet.

In each corner of the bottom sheet, I drilled a shallow depression to take a 25mm 1ft long dowel and secured all four of them with very solid 32mm x 6mm screws.

The second sheet I drilled the shallow depressions again, and lowered the sheet onto those I had just secured, and again tightened very securely with 32mm x6mm screws. The result is a firm open box of two 4x4ft 17mm sheets held together with 25mm dowels in the corners.

I next purchased an 8x4ft 12mm non-structural ply sheet and cut four planks that would fully enclose the box, and screwed each of them into place with eight 32mm screws and washers, four screws for top each side, and four along the bottom.

The result was a 4x4ft fully-enclosed crate, one foot deep. A little heavy, but solid, and deep enough so that if my grandson gets really absorbed and builds some mountains, the depth of the crate will allow the mountains to be a permanent fixture inside the crate.

So far so good.

I unscrewed everything and put the two 17mm plates back exactly as they were when new. I purchased three 6mm bolts and cut off the thread and the nut from each, and cleaned them up on the bench grinder, to make three 60mm long steel dowels.

I also purchased a 6mm dowel drill-bit and made three holes each in the facing end-grain of both 4x4ft plates, just deep enough to take the steel dowels. I inserted the dowels and banged the two sheets together with a rubber mallet, using a piece of waste timber to ensure the plates were not damaged.

The ends had come together really well, but I needed to ensure that the plates would not move under use, so I hack-sawed the screw-plates from both sides of a very solid cupboard hinge, and screwed each of them across the join, one on my side, and one on the other side. The rejoined plate was now as tight as a drum.

I intended to make a starter layout on the two pieces, to give plenty of places for my grandson to add track in different ways each time he has to restart his layout. You can see from the attached pictures that the layout is long, and has two tracks for a fiddle yard. I wanted three, but I couldn’t make it work.

I also had to remove the fishplates from all track that stopped at the centre joint and I coddled up some wire joiners to secure the power supply to all rails. After quite a bit of testing I decided the railway was ready for tacking, and I finished that this afternoon.

The railway works well, with trains being able to run round the outside track, and move into the inside track and back.

Once my grandson left for home I rebuilt the crate, ready for his return.

It takes less than three minutes to unscrew the crate, and about ten minutes to take all the non-fixed track off the board, and to re-build the crate. 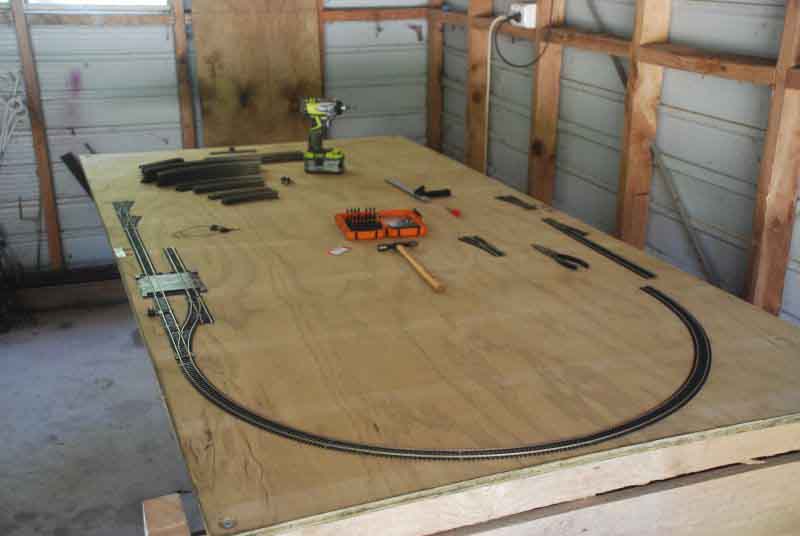 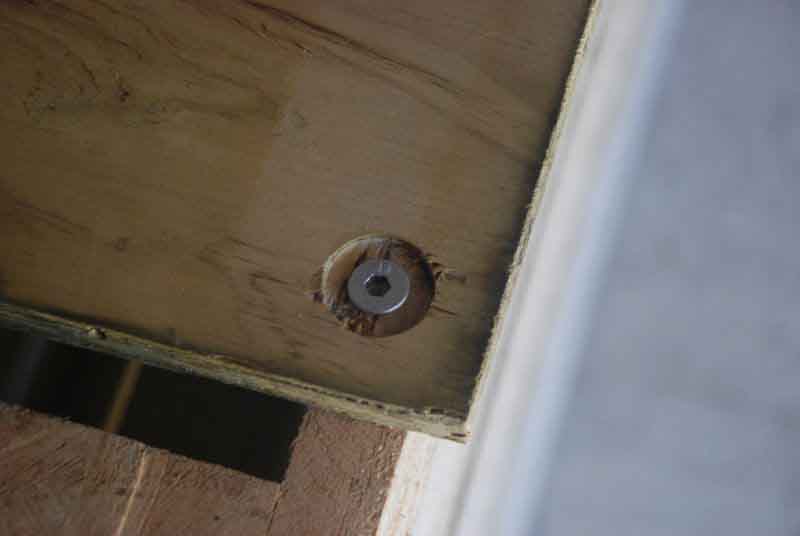 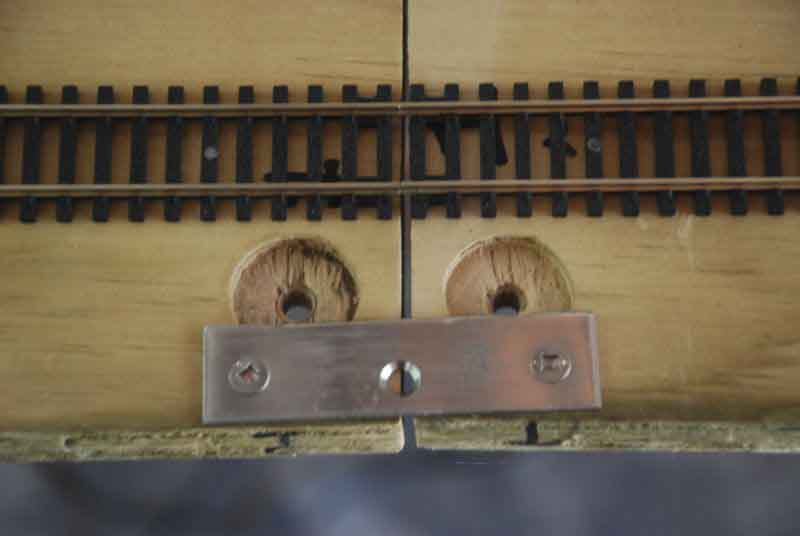 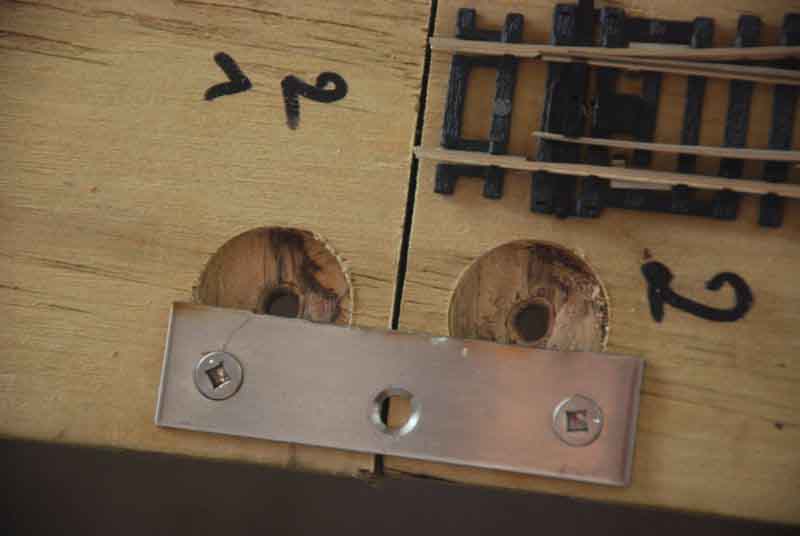 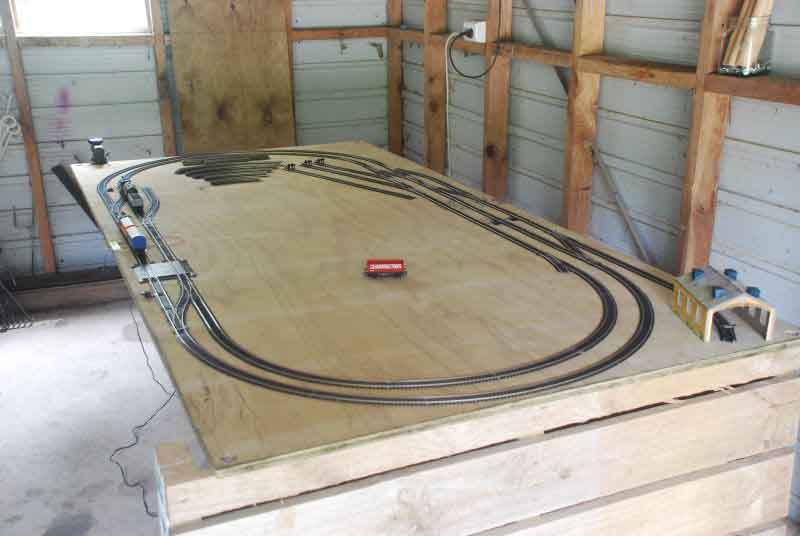 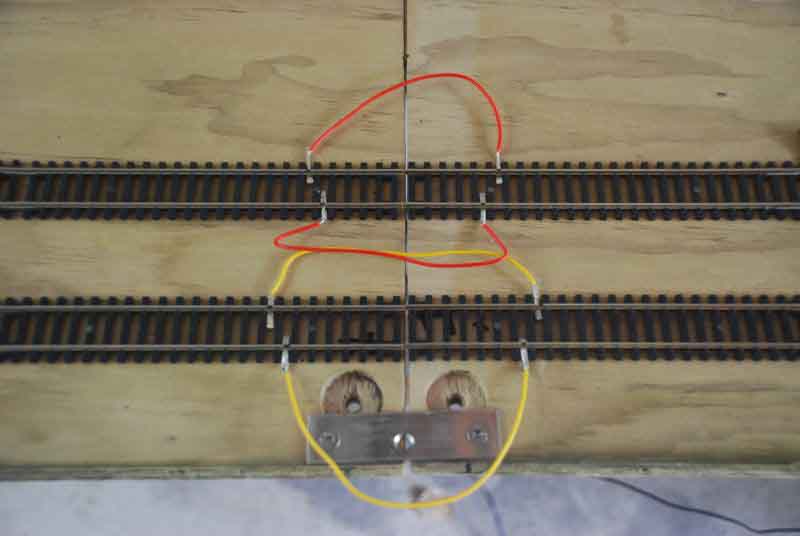 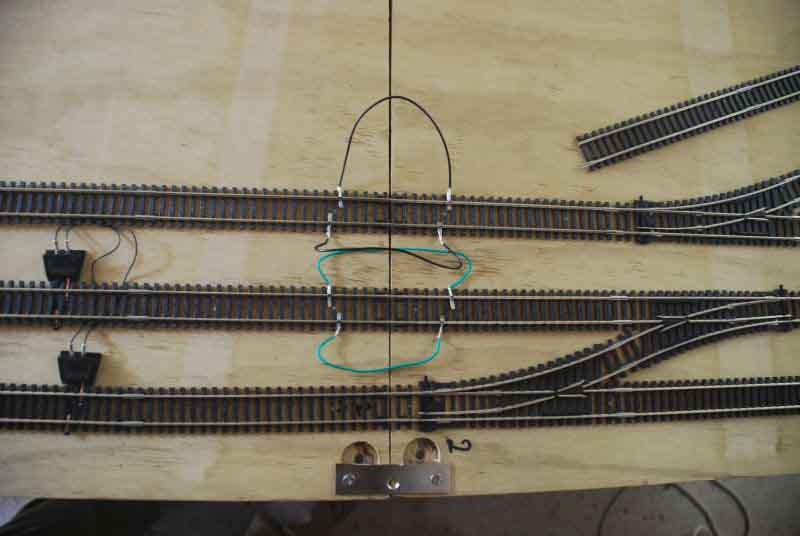 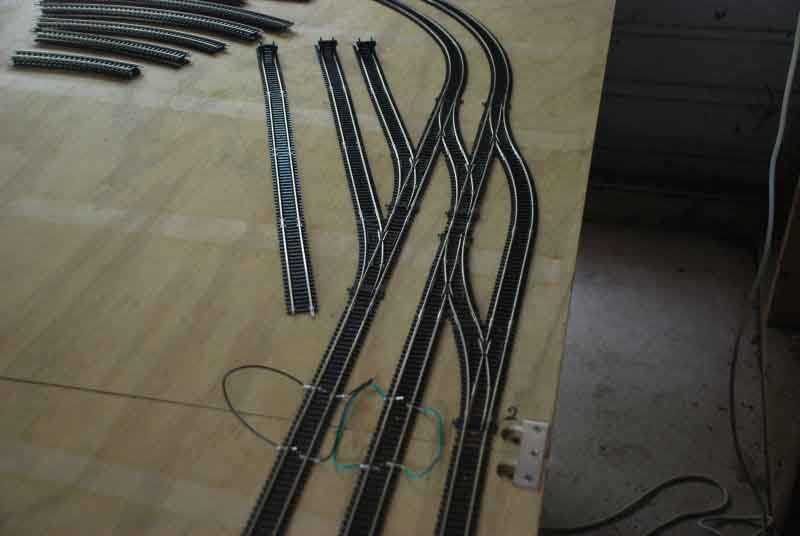 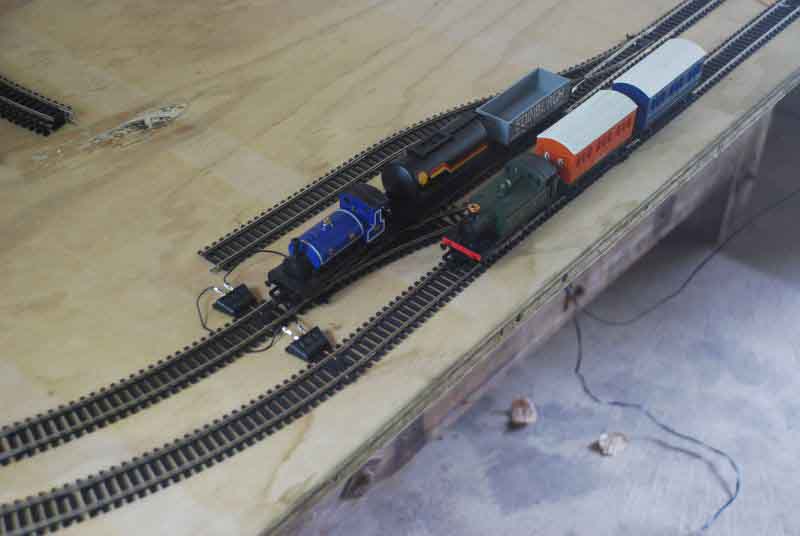 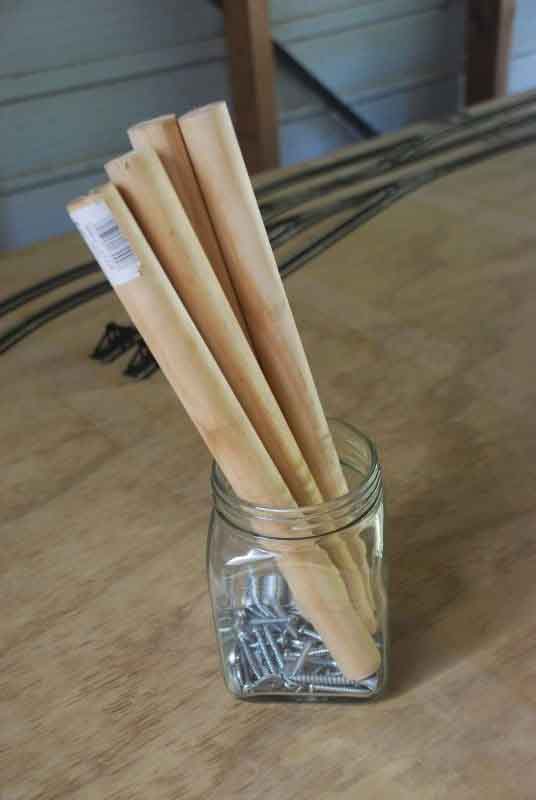 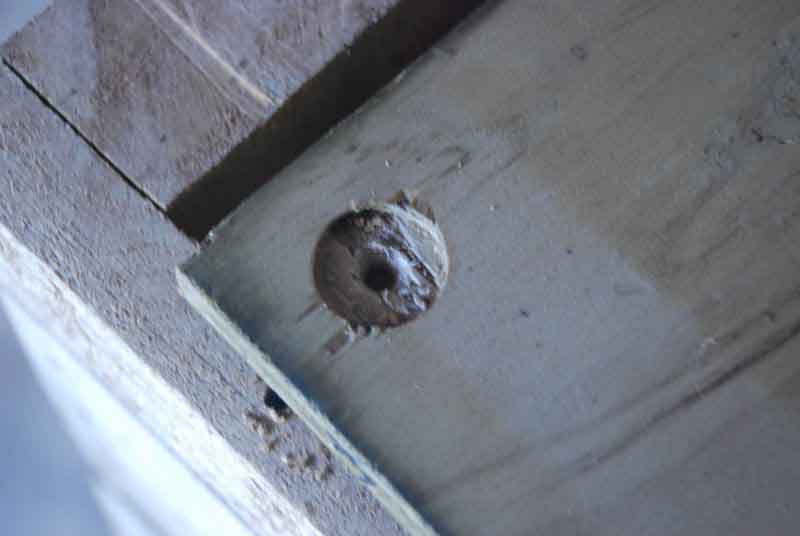 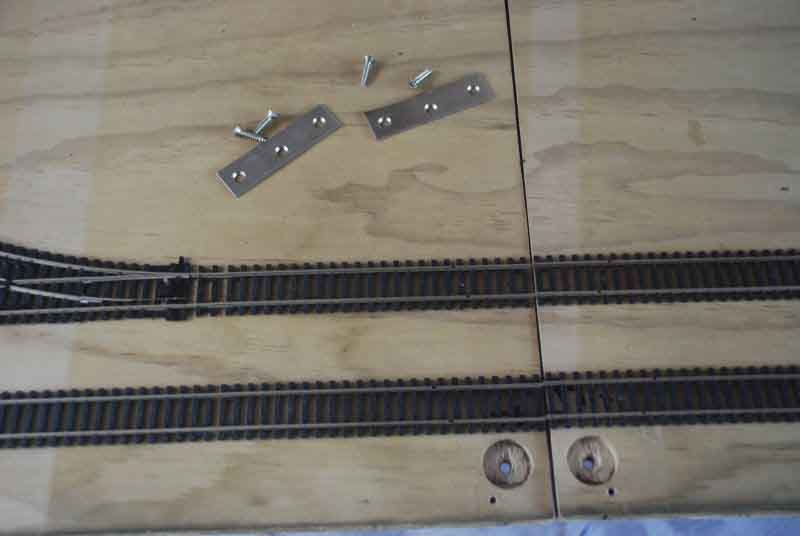 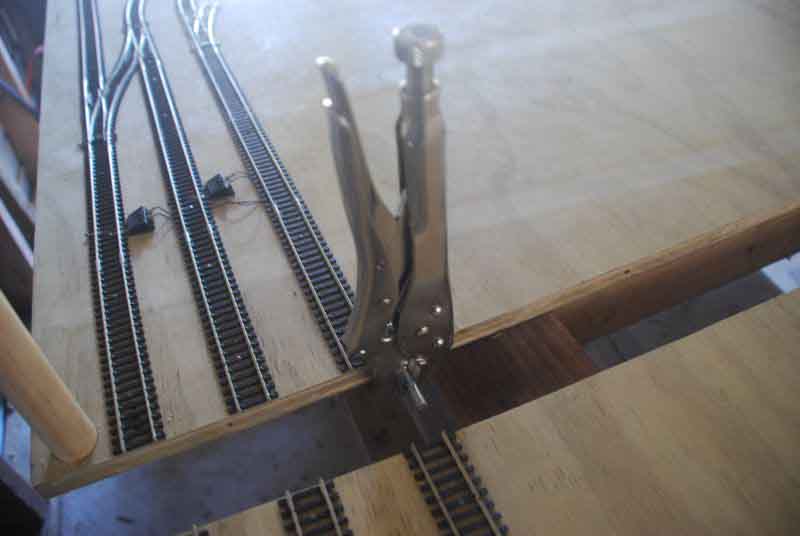 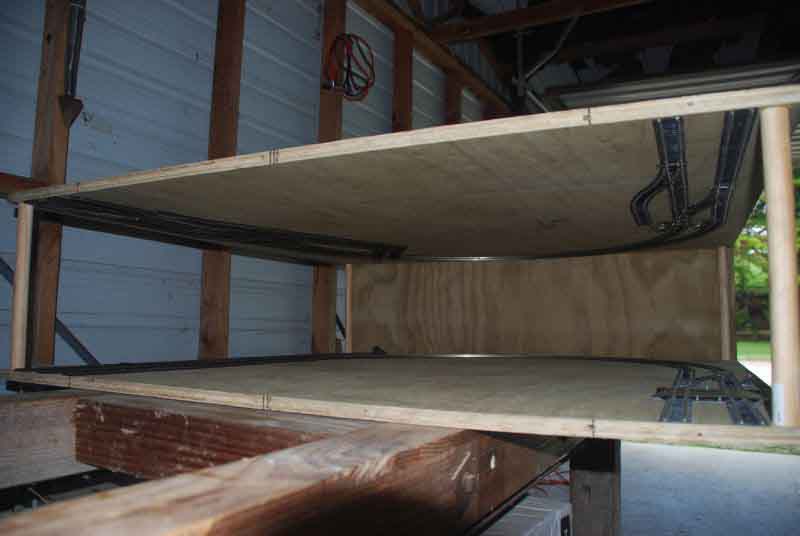 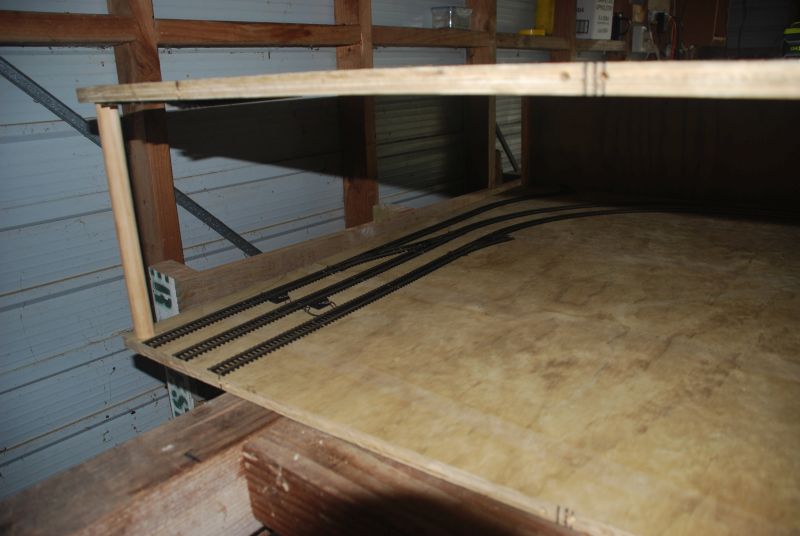 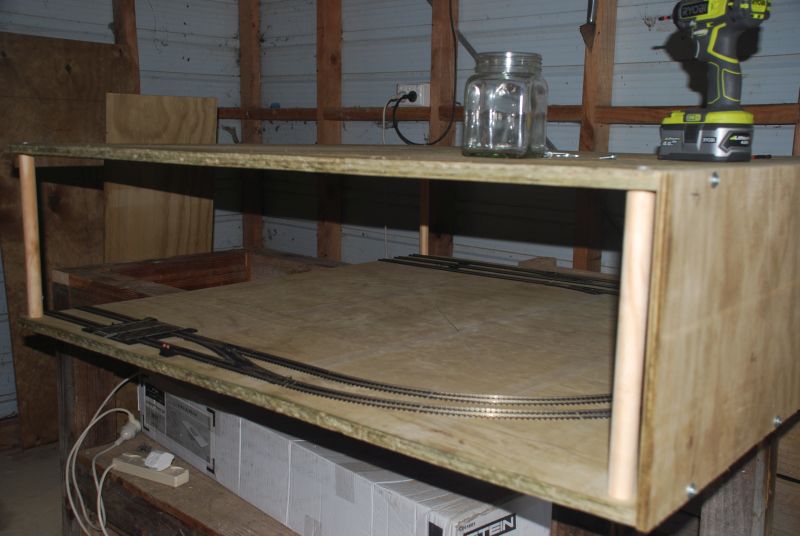 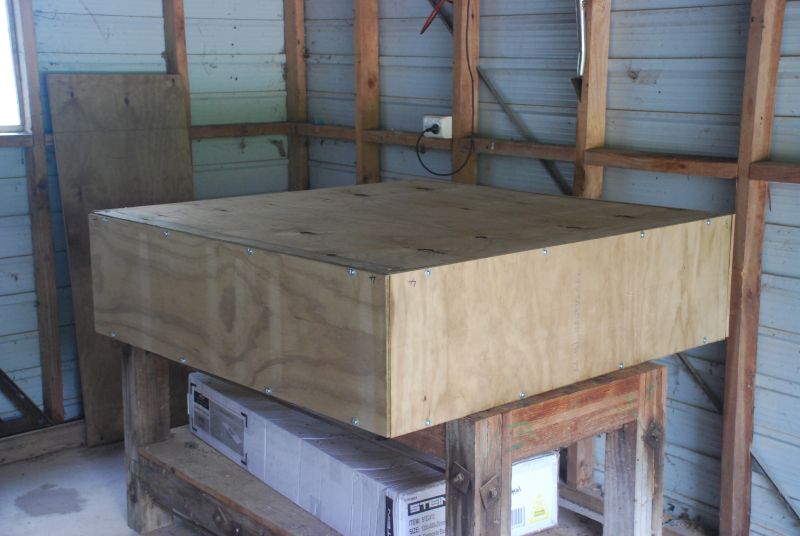 I have added quite a few new starter tracks. By that I mean lots more turnouts so that my grandson can add track to go through a town, or an industrial area.

I did solve the problem where I wanted three tracks for the fiddleyard. I have been testing the layout all afternoon and it looks pretty good. 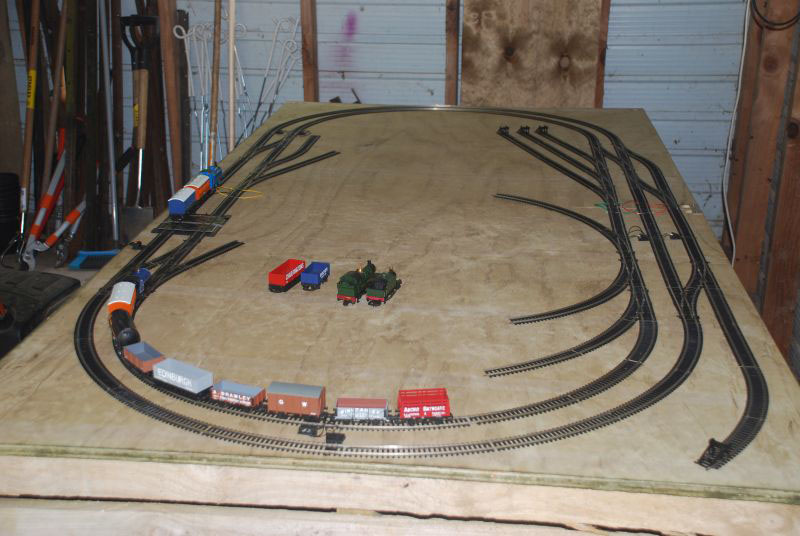 A big thanks to Ewart for sharing his portable model train table.

And now Bill’s been back in touch – his last post is here.

I’ve had more time to work on my switching layout than I thought I would and things are coming together. The past few weekends I’ve focused on wiring the layout. I have it set to run on DC. All feeders are in place and I used 22 gauge wire for those and 18 gauge wire for the runs to the panel.

I’m using suitcase connectors for the first time and really like how simple those are. I’ve had almost no problems with them – I found one bad connection today as I was test running all the track after I finished the basic control panel install. I’m using micro switches for the blocks and a rotary switch for the engine yard and parts of the repair shop area.

In my work wiring I did come across a great use for painters tape. I used some to temporarily hold wires in place under the layout. The tape works so well I am going to forgo putting in hooks to contain my wiring. The tape holds great but is easy to remove if I need to do something different.

I also had the opportunity to weather my turntable before I put it into place on the table. For those that remember my very first post showing me in about 1974 I used a Heljan turntable on my layout. While the one I’m using is much much newer it’s the same type of turntable from Heljan.

Won’t be long before I start to get ballast in place. As always I’m still having fun! 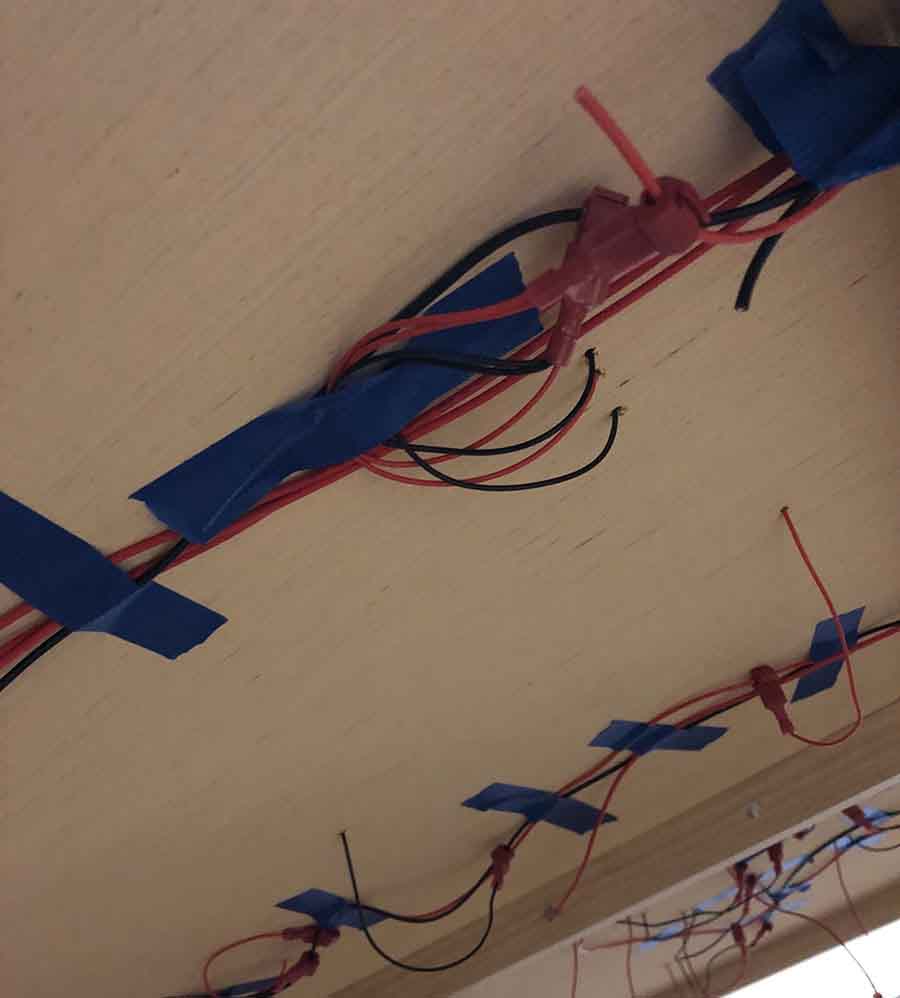 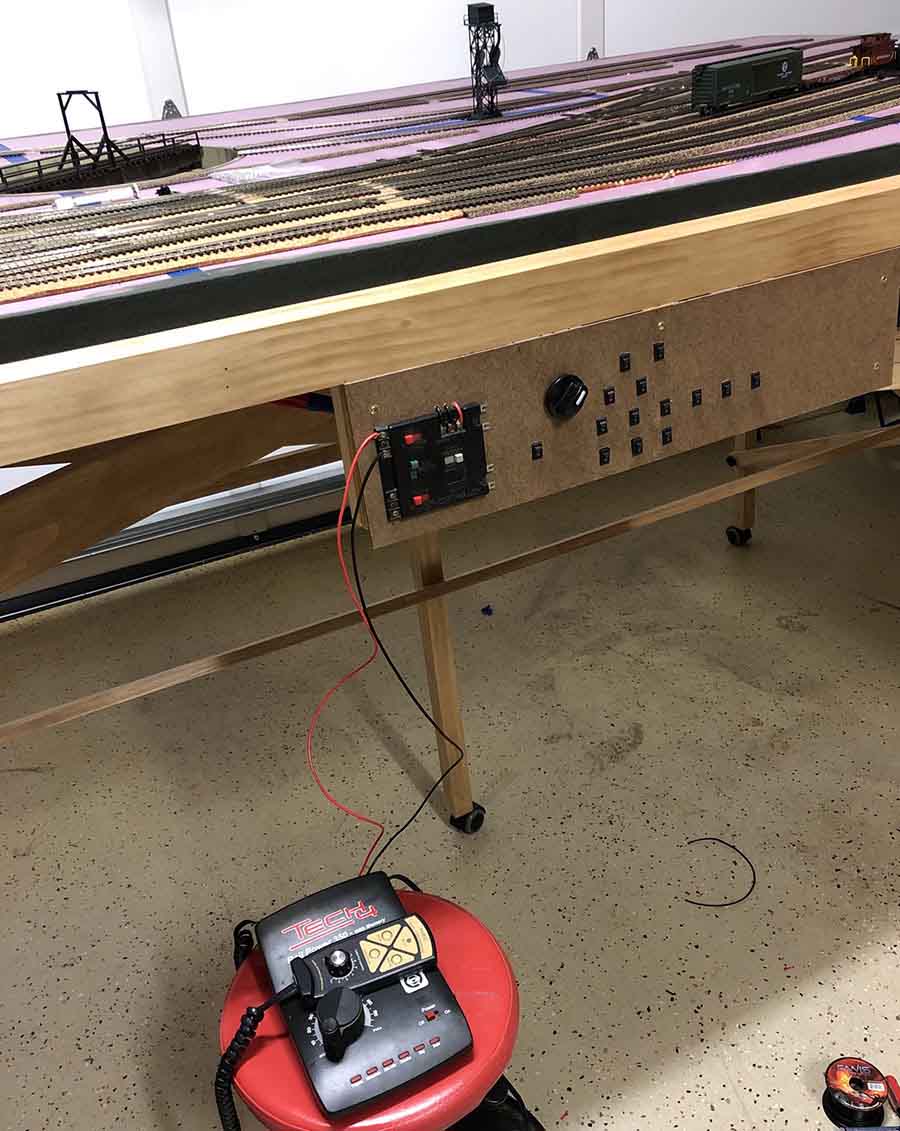 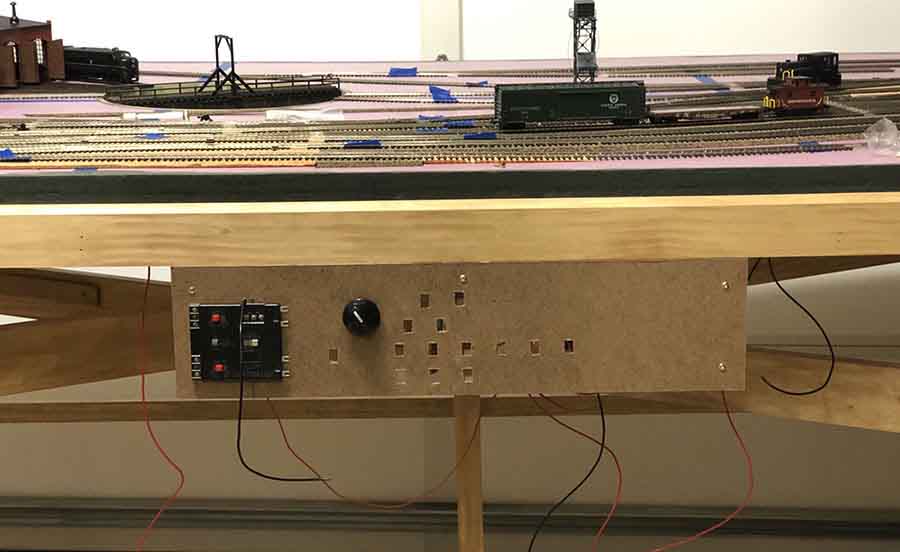 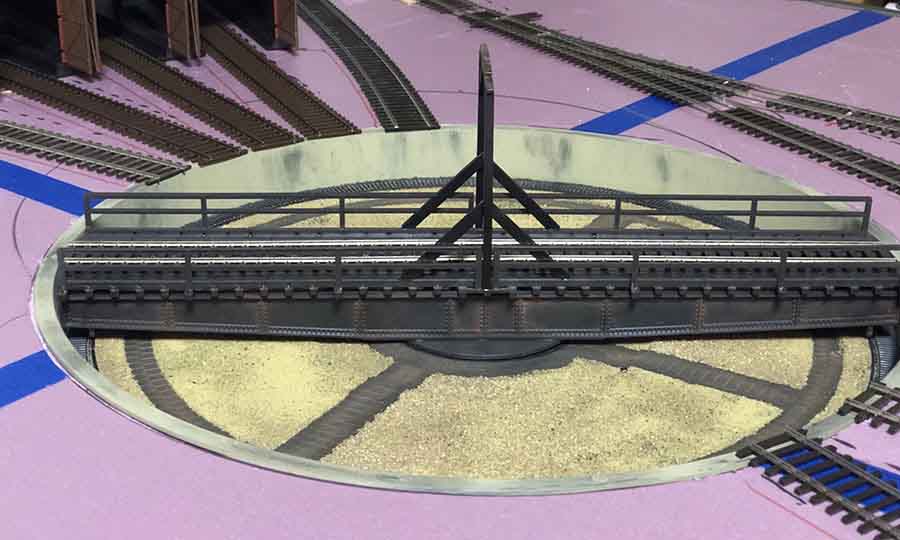 Dave’s right have a look at the Latest ebay cheat sheet here. Still updated every day.

That’s it for today. Really enjoying all the updates at the moment – I hope you are too.

And don’t forget the Beginner’s Guide is here if you want to do more than just daydream about your layout. Why not make a start?