John’s been busy on his shelf model railway:

I’ve been receiving your daily communication for about 18 months now.

Inspiring articles and pictures plus the curiosity of never knowing what the tide will bring in today – that’s what keeps me interested to open up your link daily. Keep up the good work!

As my story goes, it all started so innocently 35 years ago when I had great intentions of building an HO model railroad layout for my two sons.

I was able to get a simple and bare 4 x 8 piece of plywood on legs and a single loop of HO track traveling around the perimeter, similar to a set up my Dad built for me using a Triang railway set way back when.

The layout – if you can call it that – wasn’t much, but it did provide us with some fun.

We simply had to use our imagination on a grand scale as we transported those bold-colored Lego blocks in the mismatched hopper and gondola cars from one side of the layout to the other.

Business life, company transfers, et al, curtailed any furthering of this spirited initial RR effort. Now that I’ve retired, I decided to use my newfound time to build a layout my two Grandsons will enjoy when visiting. In essence, build the model layout I was never able to build for my boys.

So, with great hope and anticipation, I located the two old cardboard boxes of miscellaneous train items from the deep dark basement and peered in for the first time in over three decades.

What limited hodge-podge inventory I had, hadn’t weathered the various moves and storage well.

I quickly wired up a straight piece of track and tested the loco’s. They kind of worked. Some rolling stock models were still in the boxes, so they’d be OK. Many others were in pieces. Where did all my tracks go? Humm… I need to design a proper layout!

I discovered a complimentary RR design software called SCARM and was totally consumed with it for about a couple of months.

My retirement coincided with the beginning phases of COVID lockdown, so I felt this was a justified and productive use of my time.

I was designing hundreds of large and small layouts. Simultaneously I started to acquire additional HO items.

The Train Gods must have been on my side as I got very lucky with a few model train estate sales (my goodness… the amount of stuff people collect and never seem to use is mind-boggling).To the point that I’m asking myself the same thing… Am I heading down that same route??!!

I’ve bought way too much, but who could resist when you’re purchasing new in-the-box items for five and ten cents on the dollar!

I ended up with a mishmash of unbuilt and pre-built model buildings, locos, rolling stock and track – brass and nickel – but I simply figured I’d slam them into a repurposed life on a small “trial” shunting yard or junction style of layout. The idea being if I could build a small layout, learn from it, then I could plan for the future “empire” layout.

So, here it is! I’ve latched onto the darling little railroad company known as the Toronto Hamilton & Buffalo Railroad – TH&B – centered in southwestern Ontario.

It has provided inspiration for this little layout and will become the main theme of the larger and future layout as well.

The TH&B has a colourful history and a great story. Like many other North American Rail Roads, it managed to survive many ownership groups before it was eventually swallowed up by its then iconic majority shareholder, Canadian Pacific Railways, in 1987.

I joined the TH&B historical society and the guys there have been very kind and responsive to all my questions.

I’ve provided diagrams of both the current shunting or Junction Style layout – fictitiously named Amaranth Falls – and the future larger layout to also be modeled based on TH&B operations in southern Ontario.

As with all layouts, even this small one is “dynamic” in nature and I’ve made a few alterations after having taken these pictures. Does it ever stop?

Whew, yes, a lot to fit into this little layout, and again it wasn’t planned this way, but with the various buildings that I had acquired at the various garage and estate sales, etc., well I just felt it could work. It’s a simple DC layout.

Surprisingly, I’ve really enjoyed the creative aspects of modeling scenery, water, backdrop creation as well as the weathering of both rolling stock and buildings. That’s the fun of a shelf model railway.

So much more to learn, but as promised to my lovely wife, I’ll have to finish the basement renovations before beginning the big layout.

Oh well, more time for dreaming up new visions of what that layout might eventually contain. That’s all part of the fun!

Hope you will enjoy my story and pictures. My continued thanks to you and your readership for excellent material and inspiration. 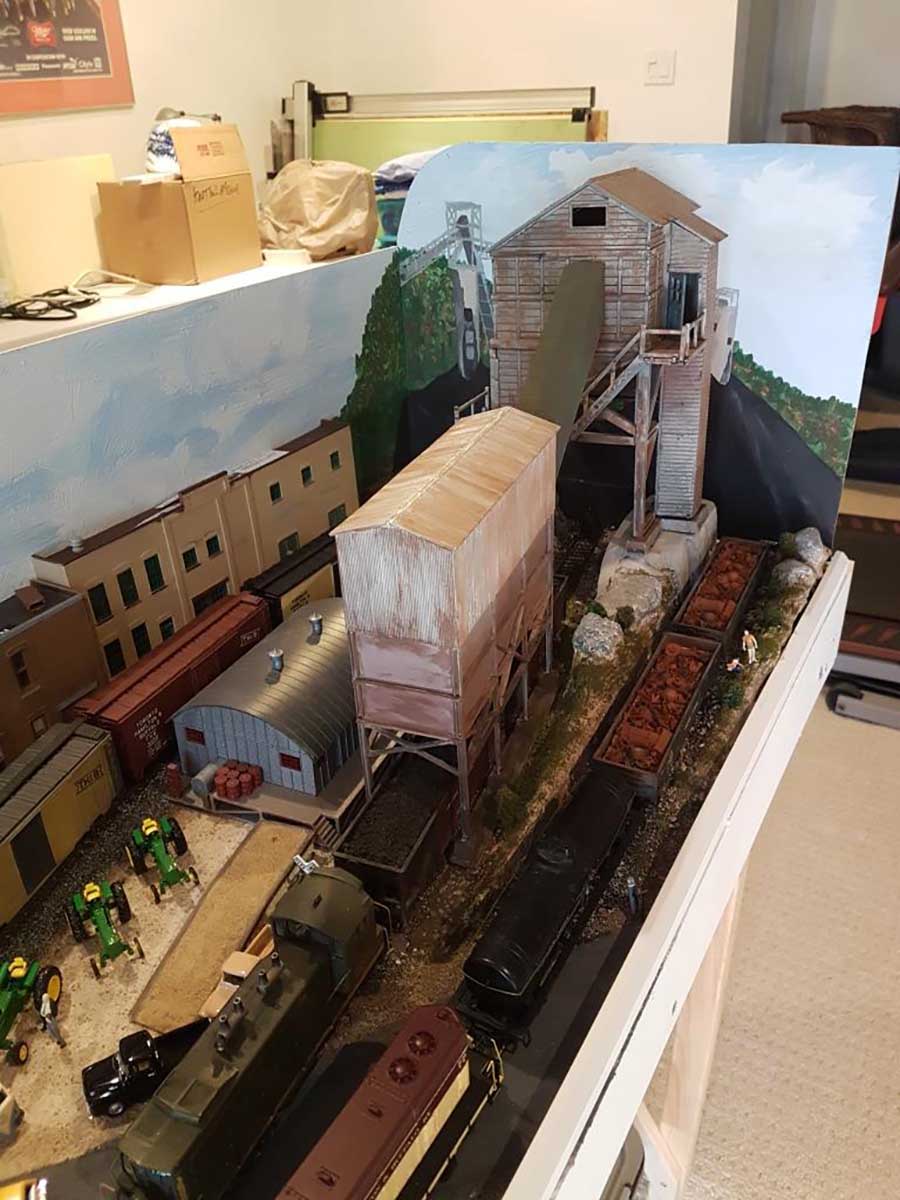 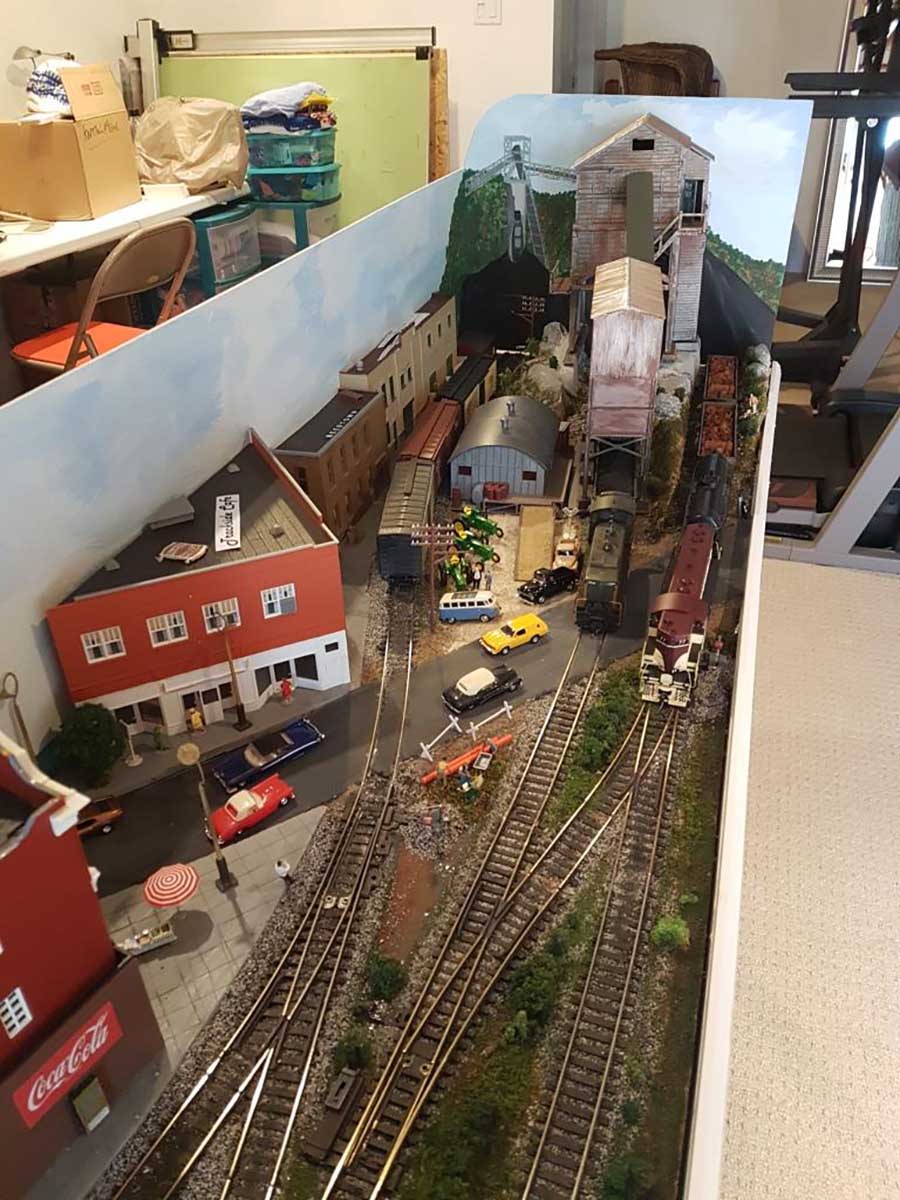 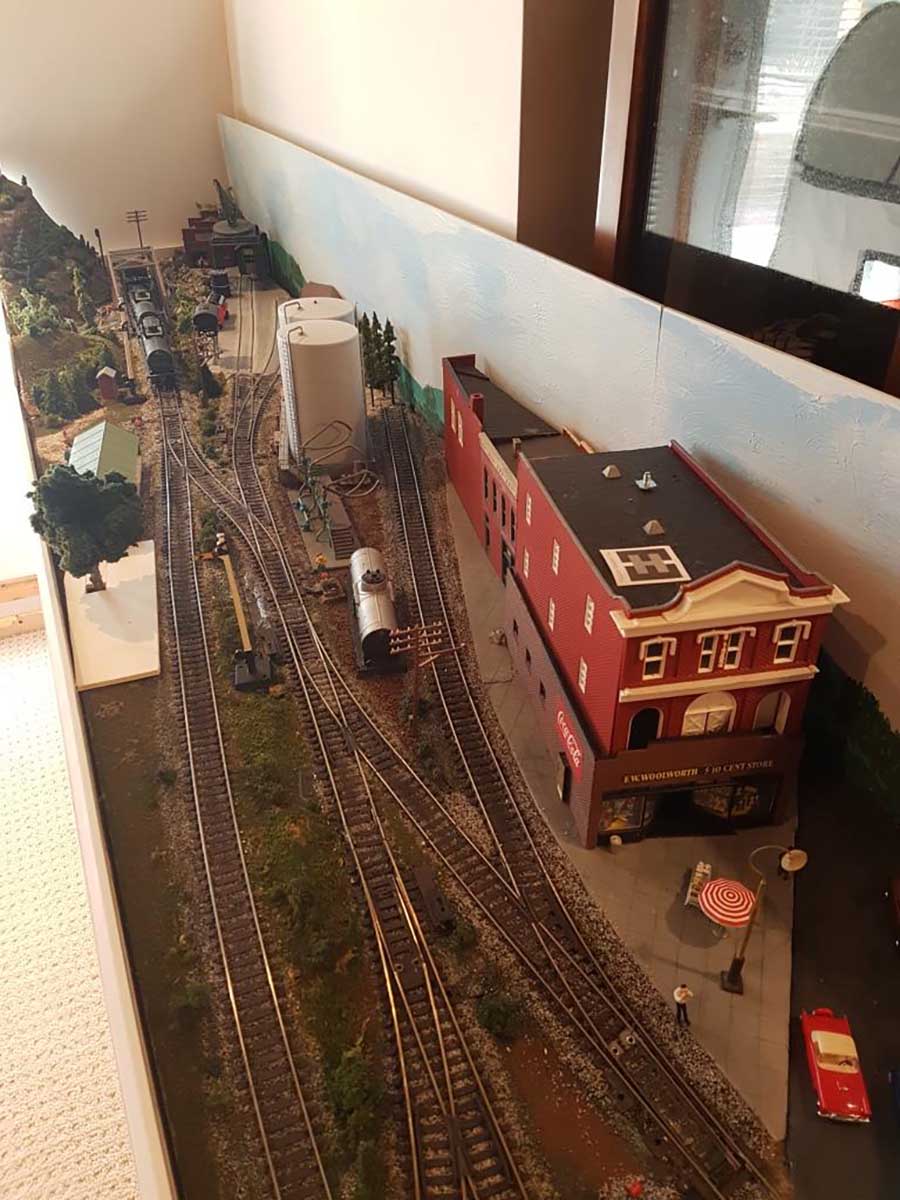 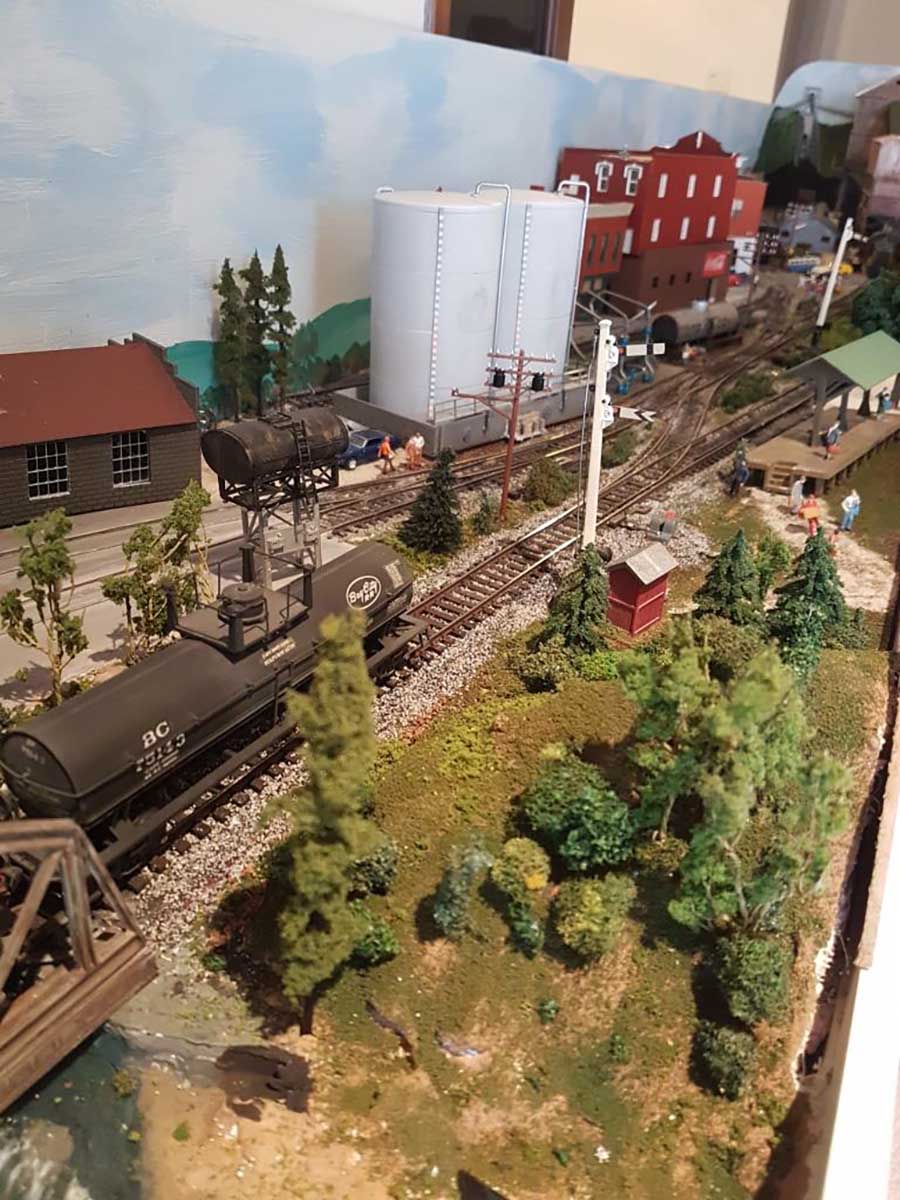 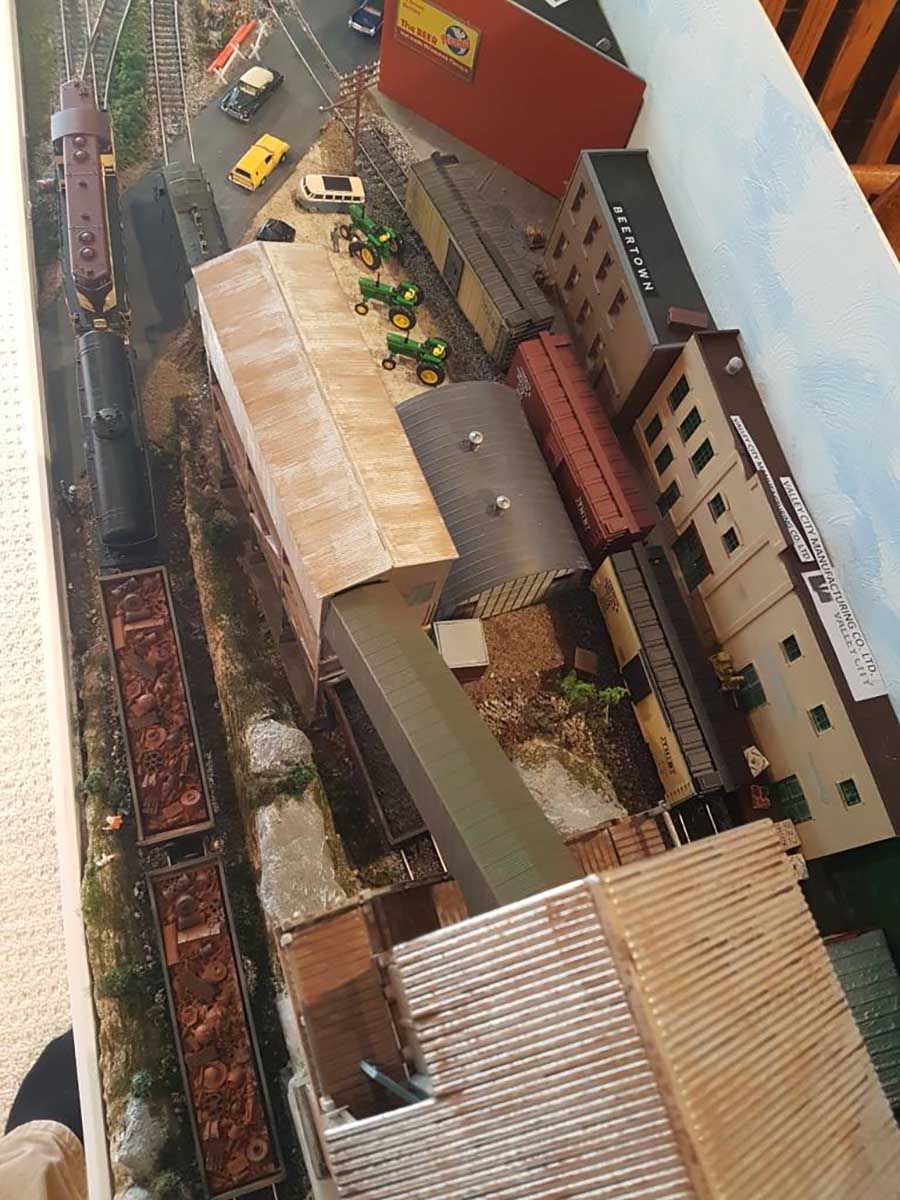 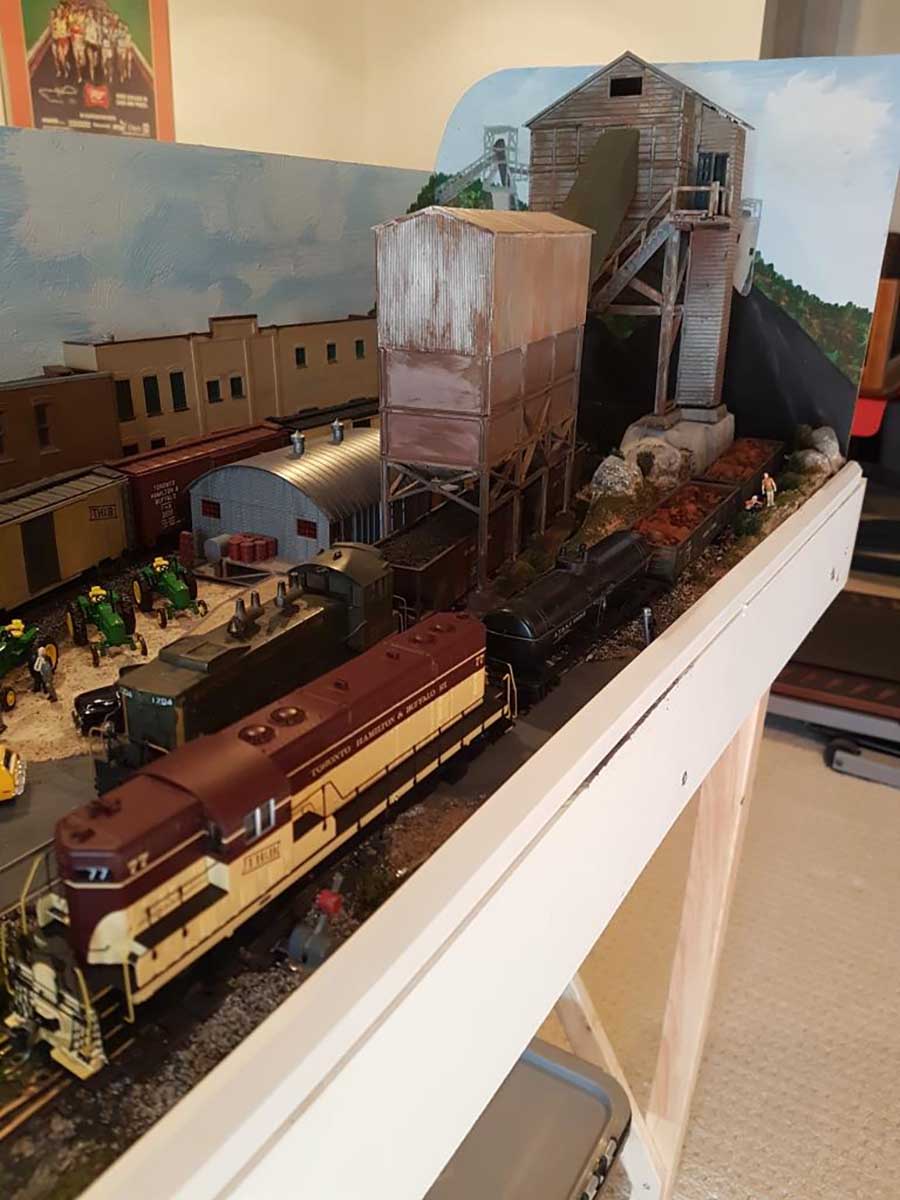 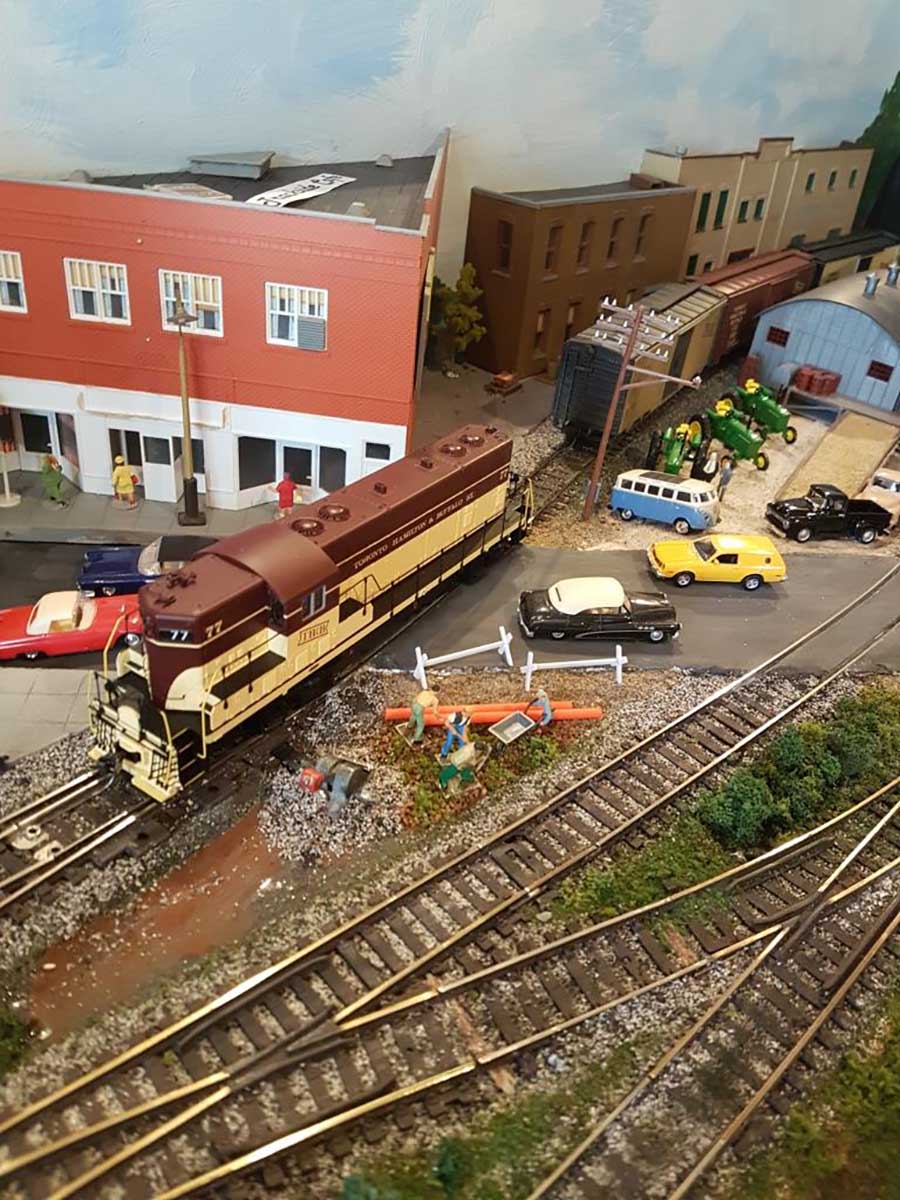 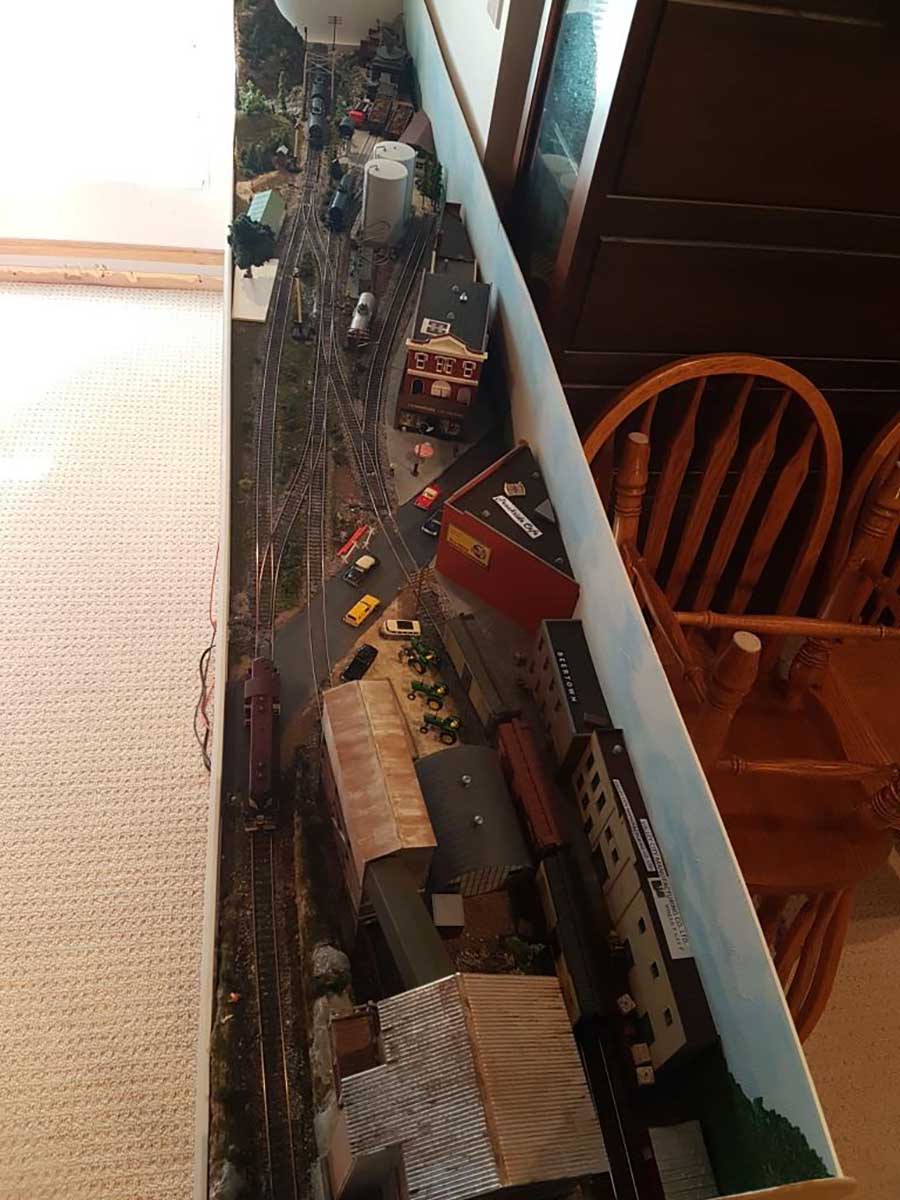 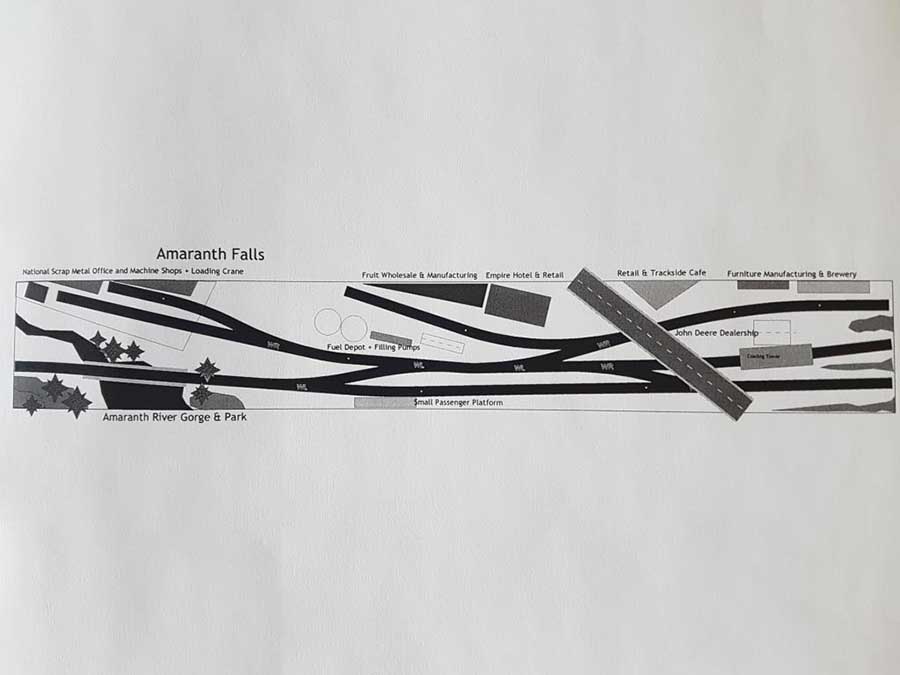 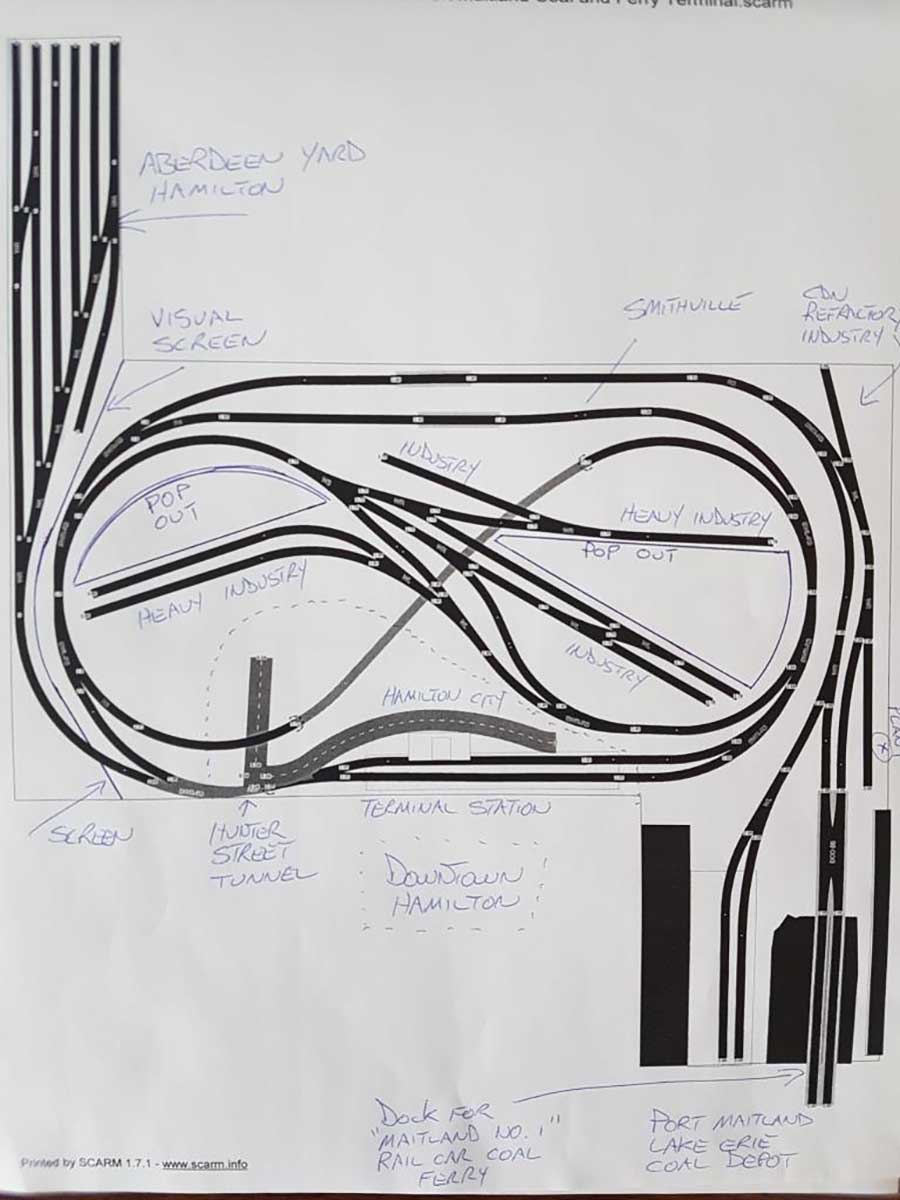 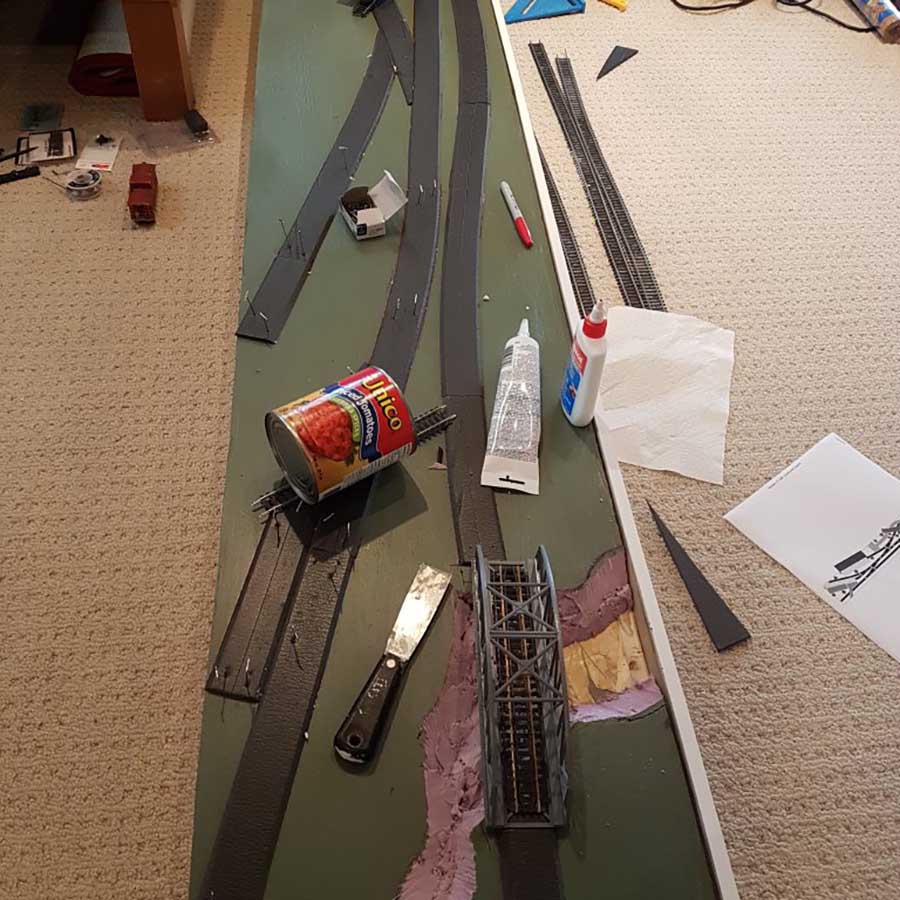 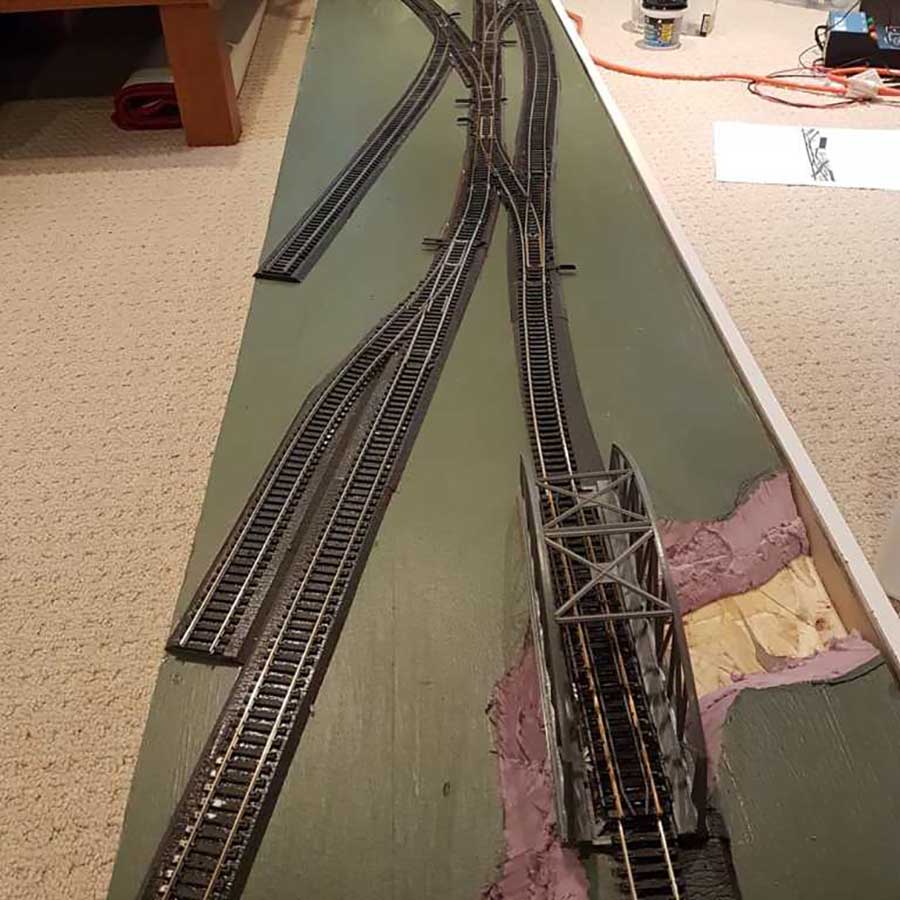 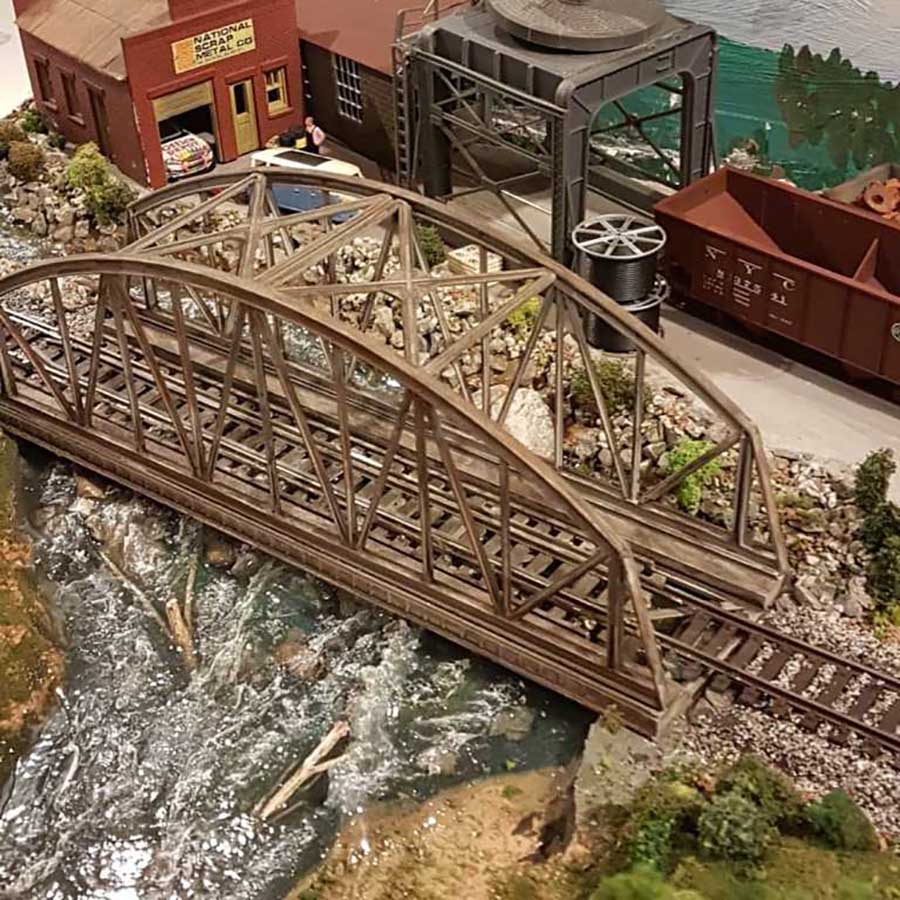 A huge big thanks to John for such a wonderful narrative and pics on his shelf model railway.

We all seem to slip back in to this hobby on memories and dusty old boxes in storage. Long may it continue.

And don’t forget the Beginner’s Guide, if today is the day you dig out your memories from the attic or basement.