Dean’s been in touch again with the Progress on his N-scale layout, the Piedra Blanca and Pacific Railroad.

“A while back, I submitted some videos of my N-scale 4ftx6ft layout constructed using the Woodland Scenics Scenic Ridge kit.

Woodland Scenics has developed some interesting construction methods and materials based on Styrofoam foundations put together with hot glue, covered with plaster cloth, then finished with ground cover and trees.

The system is easy to use, very forgiving (errors and changes can be quickly fixed or covered up), and leads to a strong but light-weight layout.

I’m using a similar system that was much cheaper but still strong and easy to make.

The Styrofoam is cut with either a hot-wire cutter, or table saw (for precise cuts), then glued together with a hot-glue gun. Track is glued to rubber track-bed which is then glued to the cut Styrofoam roadway.

When I built the original layout, I added more switches and sidings for future layout expansion.

The first part I added was a 1′ x 3 1/2′ addition shown at the bottom of the photos below. The main line comes out from the right of the original layout and makes two turns towards the rear of the layout while beginning a 3% climb. The main line eventually had to cross over the original lines. Along the back of the layout I added a hidden 3-track fiddle yard for setting up and storing trains.

To begin the expansion, an L-shaped member and supports for the track were cut and glued together. (See first photo.) The track was supported by Styrofoam roadway which was glued to the supports.

The two wires visible are #12 feeders (connected to a DCC controller) with smaller wires leading to the track. All track pieces are soldered together except for switches and bridges which are held in place using sliding rail joiners (so they can be readily taken out).

The feeders go all around the layout and wires are soldered to each track section. Rubber track bed was glued down with Elmer’s glue and the track pieces were glued to that with the same cement.

A road was built from 1/4” foam core from a hobby store. Foundations in the middle of the layout are for buildings. 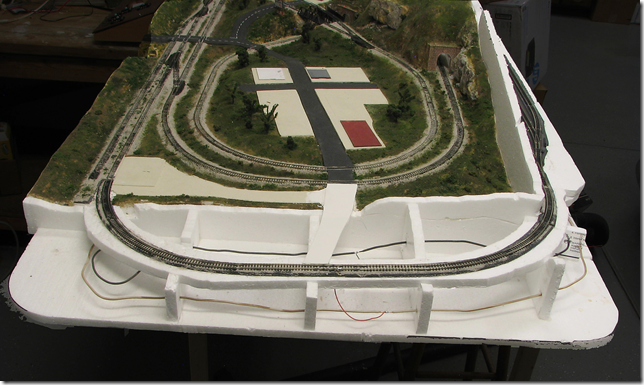 The next step was to add the surround. This was another piece of Styrofoam glued to the support members. At the curves, I cut slots about 2/3 into the foam and every 1/2” to allow it to bend around the smooth corners. The ¾” PVA plumbing pipe and fittings was added so that I could later run in switch wiring to the hidden yard. 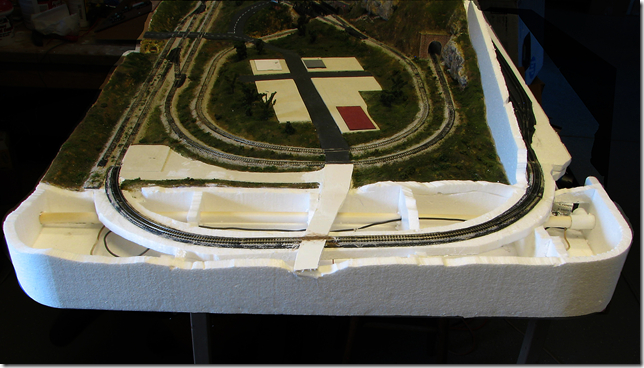 The next step was to form the rolling hillocks with wadded newspaper and cover with plaster cloth soaked in water. This is a typical method used by many. On the right are supports for the tunnel portal and a foundation for a rock wall running along the back of the original layout. 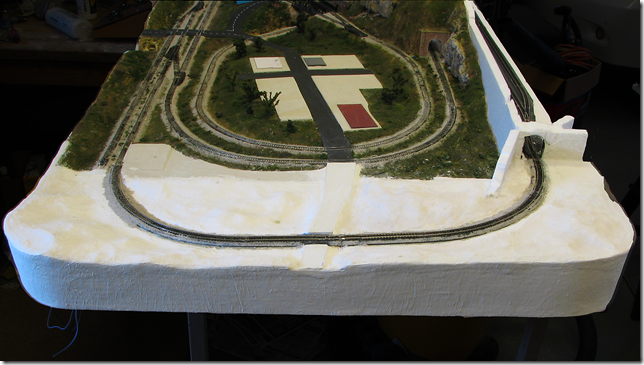 Then the track was ballasted, the ground painted and textured using usual materials. This next photo shows the start of the rock wall on the right side of the original layout. At this point the roads were textured with fine sand to simulate gravel. 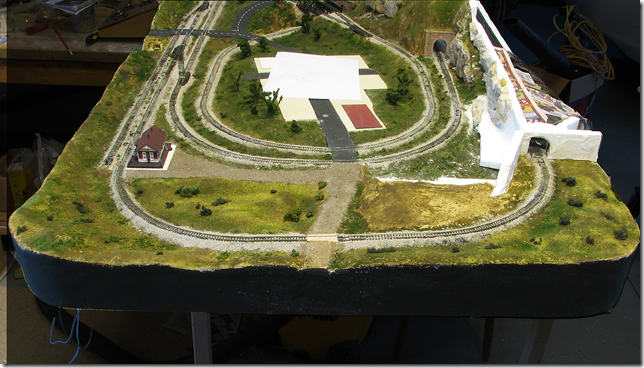 The final photo below shows the town buildings and station back in place, the added tunnel portal, the completed rock wall, and the cover for the hidden yard. 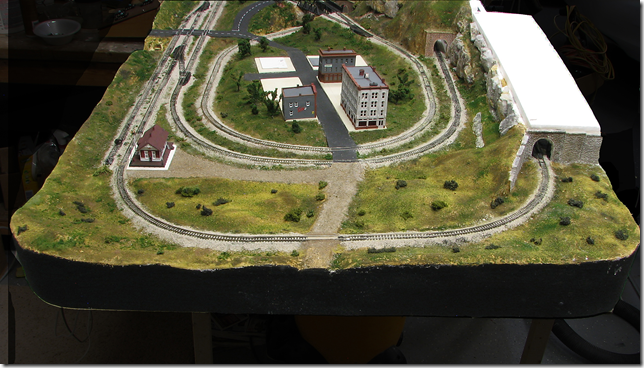 And here in the last photo is a better view of the town. Two freights, one starting up the long haul to the western division on the new line, the other coming back from the eastern division, meet at Piedra Blanca.” 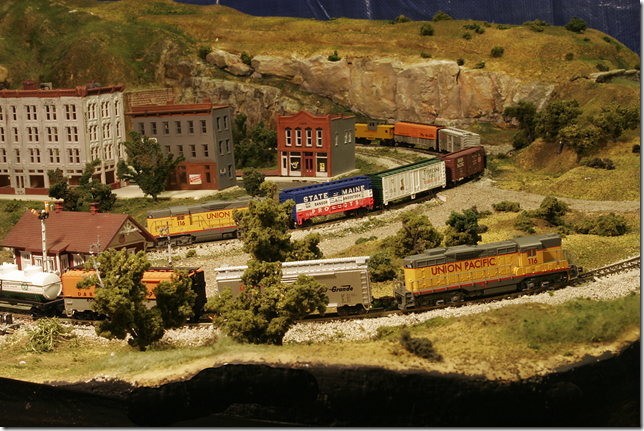 Brian has been in touch too – to answer some questions on his shelf layout:

“Hi all, an explanation of ‘my’ shelf layouts.

The upper level will be a logging operation (moving wood to a sawmill) loosely based on the Westside Lumber Co. on the west coast of the USA where on one side of the layout the trees will be cut down and loaded onto log cars for a trip to the sawmill on the same level.

On the other side will be a small engine terminal with a turntable and two stall engine house plus a small yard.

There will be a runaround at the tree felling area in order for the train to have a loco in the front on the return journey. There is no connection to the lower level.

The bottom level will be based very loosely on the Denver & Rio Grande RR (locomotives and rolling stock only) and will have a full engine terminal facility on one side and the harbor on the opposite side terminating at the wharf. Again no connection between the levels.

In reality, I will have two different layouts to operate independently from each other. The layouts are designed to have two operators for each level all running on DCC.

Yes, the wharf was salvaged from my previous layout where it terminated against a wall. There was a mirror at the end and because you could not actually see the end of the wharf but only in the mirror hence the mirror images on the buildings. These will be changed once placed in the new location where one can see the actual end of the wharf.

In a few of my previous posts, one can see all the photos of the building of the wharf and explanation.

If you peruse through all my previous posts, there are numerous photos of my buildings, locomotives and rolling stock on my previous layout. All (?) will be used on my new layout.

The reason for building a new layout is that we retired and moved to a different town 500 kilometers up the coast from Cape Town.

I will send Al a plan of my layouts in the near future.

A huge thanks to Brian and Dean. I do love to see these layouts come alive over the months, and it’s also wonderful to see how folk approach things differently.

That’s all this time – don’t forget the Beginner’s Guide if Brian or Dean have got you itching to start.