Jim’s been in touch again (his last missive is here).

Jim from across the big pond here in Buffalo NY, and it has been a long time since giving any update on Starrpoint Railroad.

I have been converting the layout from DC to DCC operation. It has required a huge rewiring undertaking.

There is over 500 feet, of new wiring on the layout and there is more to do. From wiring all of the track points, the 18 tortouise switches, signaling all of the buildings with new LED or SMD lights in them. The LED’s need a resistor to control the voltage going to them while the SMD’s have resistors built into the light strip.

There is a diesel and a separate steam area on the layout. The Diesel side has a Walthers Transfer Table. It is an old version that Walthers had some years ago.

The electronics for the table stop working, so I had to find a way to make it work. The Electronic board controlled the lights and the movement of the table deck. And since there is no way of replacing the board, I had to come up with one, so I built a board that will handle the lights.

Here is a picture of the board that I built for the light issues: 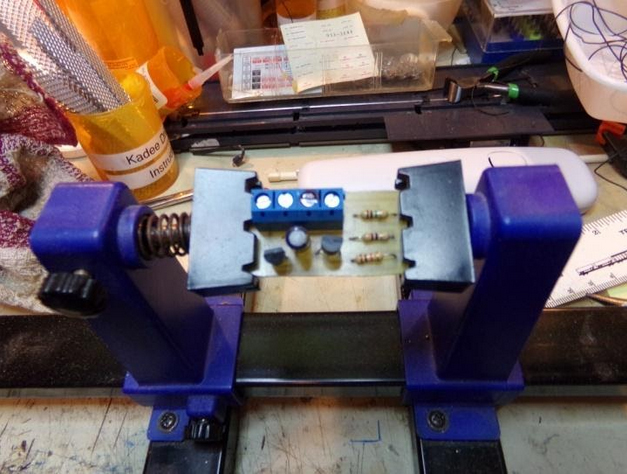 The board has wiring for the lights, and tracks. Since the old board was able to work a blinking light on the table to notify movement, I had to build the board with transistors to handle that part, and a part to handle all of the other lights.

For the transfer table to operate I found that a DC transformer will work to move the table back and forth, but will not automatically stop at a given point. I can stop the table, at the proper spot for track alignment. So that took care of the Transfer table operation and light issues.

In the Diesel Transfer Table section, there are 12 tracks leading to various points.

There is a 6 position Rotary Switch controlling these tracks. The Rotary Switch has two separate power connections that allows for 12 power feeds. This is accomplished using a Double Pole Toggle Switch ( position A and position B ) There are indicator LED’s showing which track is operating.

Here is a picture of the top of the main panel showing the rotary switch and control toggle. The left rotary switch is for the Diesel area. On the layout drawing I have placed LED’s to indicate which track is in use. The reason I did that, all of the Diesel Locomotives will have sound, and I did not want all of them to come on all at once, the noise level would be hard to handle. 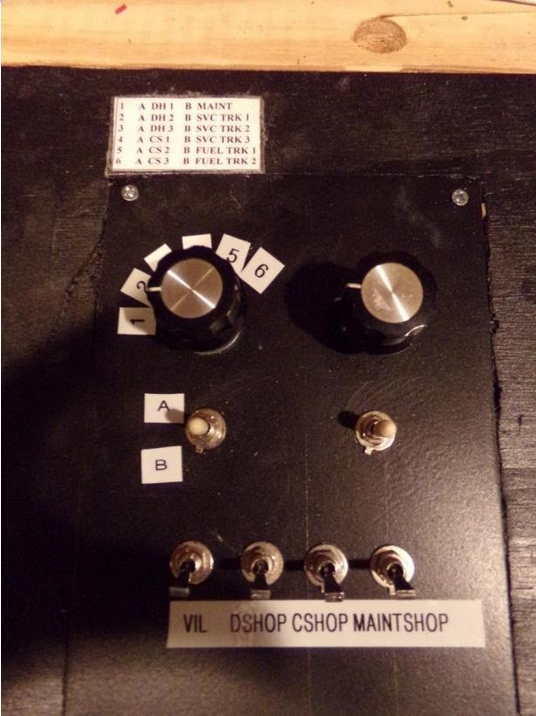 I made a drawing of the layout to indicate all of the turnouts. Since there are 18 turnouts I need a way to show the turnout position either open or closed. So on the drawing I added a SWITCH INDICATOR for the turnouts and numbered each turnout on the layout drawing.

Each one is a Bi-Colour LED ( RED / GREEN ). I installed 18 light tubes to hold the LED in place. Each of the indicator light centre’s had to be carefully cut out for the LED to show through. The Layout Drawing was LAMINATED to protect the drawing and to enhance the LED Light. 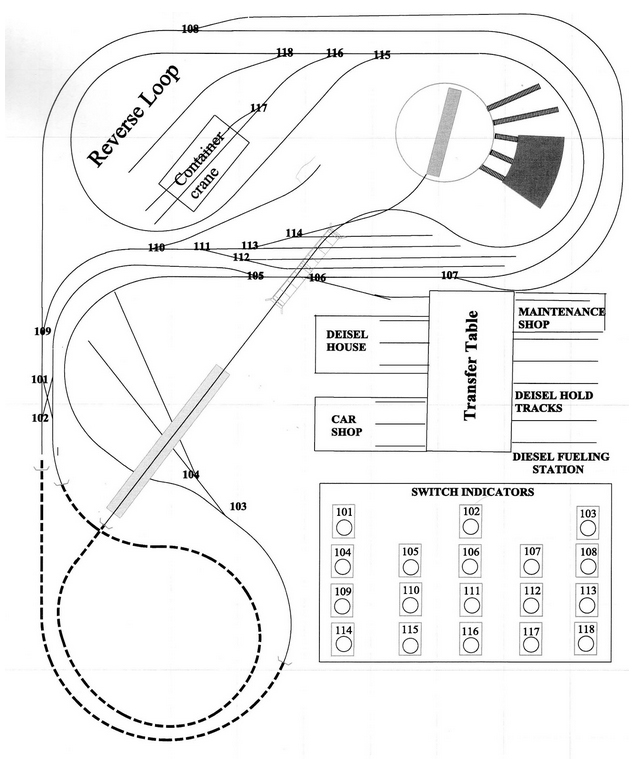 In order to have the Bi-Colour LED’s work correctly, they must be wired a specific way. Below are the items you need to complete this project.

Terminal points 4 and 5 are auxiliary power points. These two points can be used to supply power to signals, or track usage.

Here is how to wire the BI-COLOUR LED.

The Ground part of the LED can be wired in series with other BI-COLOUR LED’s. 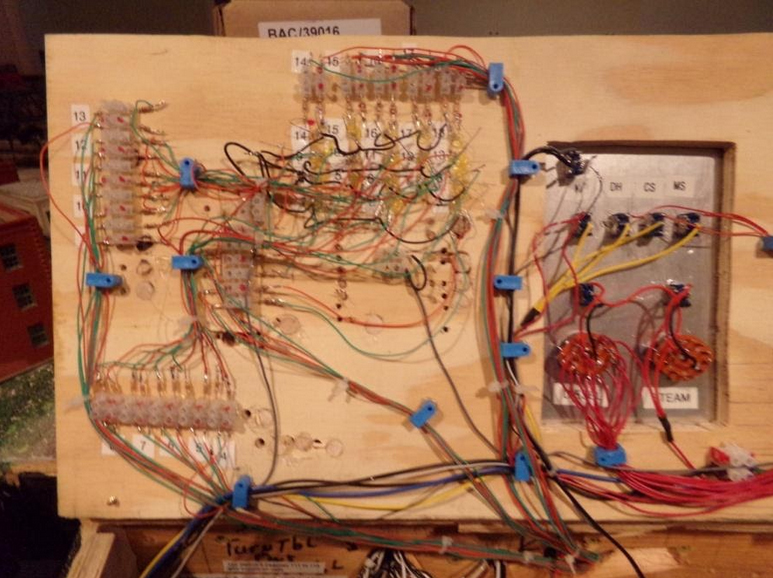 Below is a picture of the NCE SWITCH 8 MK 2 DCC boards. There are three of them that control the 18 turnouts. The boards are located in the upper left hand corner. The arrow below points to their location 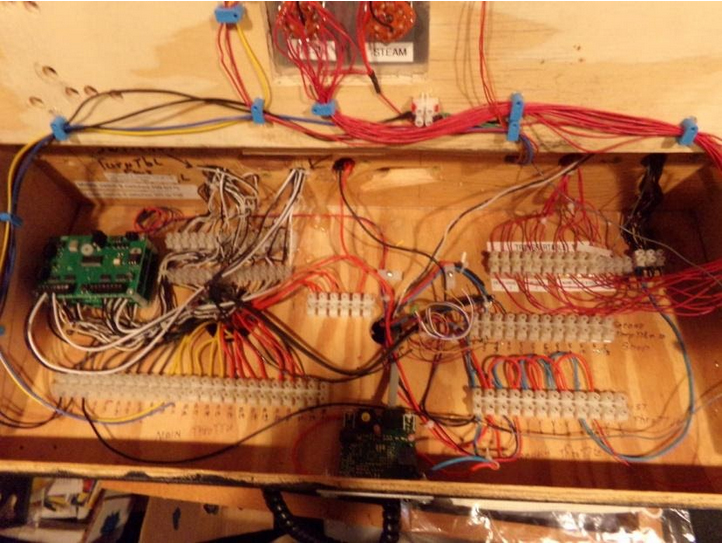 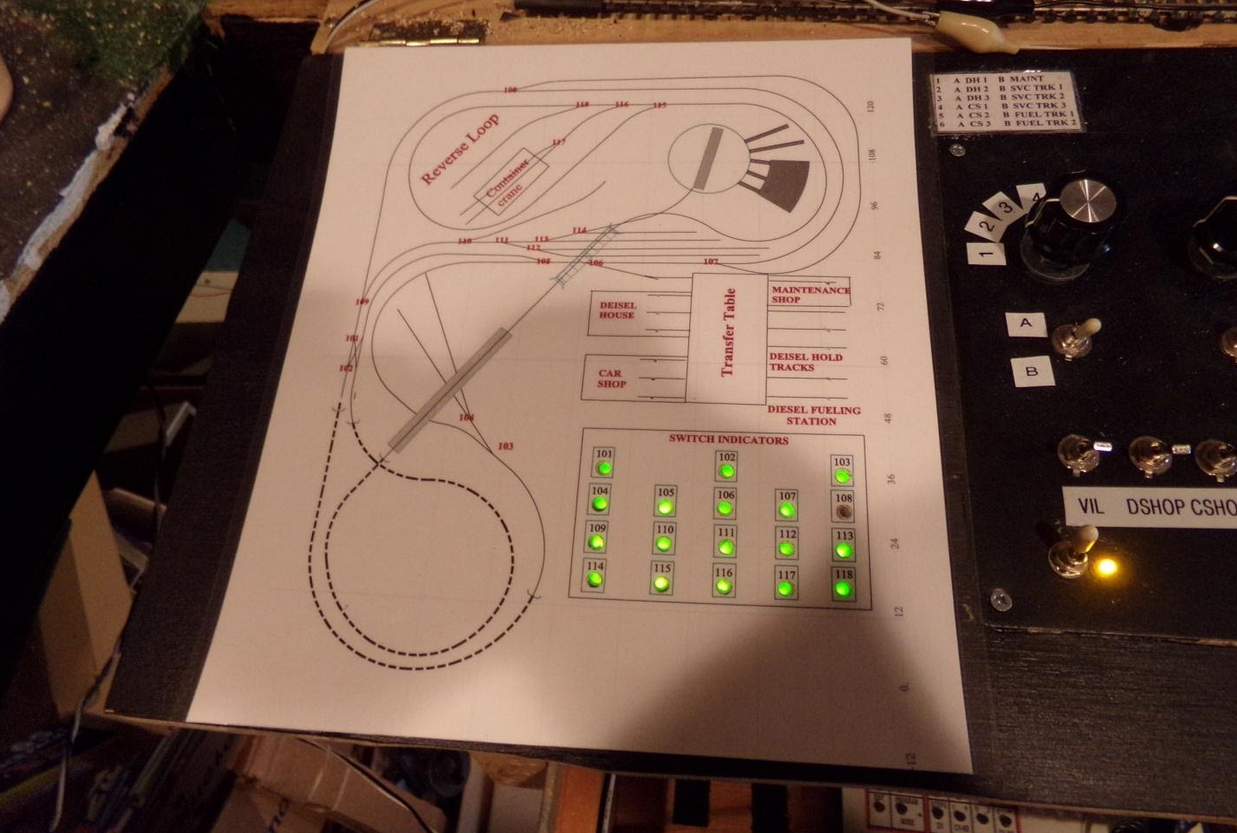 At the time when this picture was taken, turnout 108 had not been wired as yet. It is not wired for the panel. Turnout 108 has four functions: Control the turnout points, Indicate on the Main Panel, control the Signal Tower and Track Power.

The Signal Tower indicates which track is in operation beyond the turnout. All trains can enter the area that is controlled by the Signal Tower and will not continue past if the turnout is not aligned correctly.

Below is a picture of the Signal Tower. 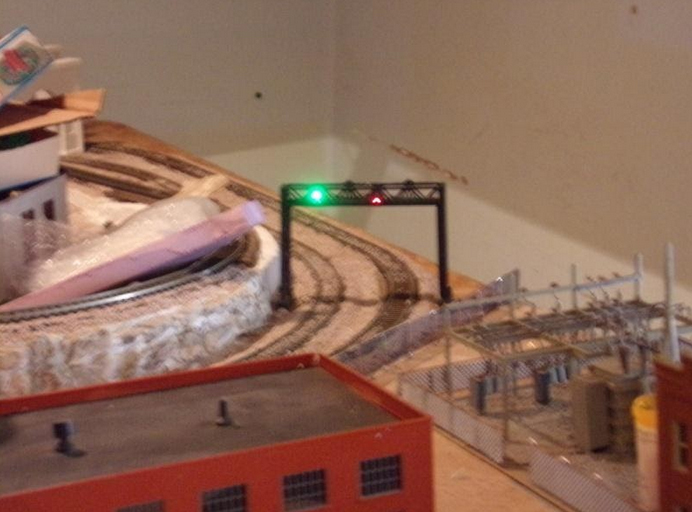 All of the above wiring took a long time to complete, but the work involved was worth it.

Most of the buildings have lights in them. On the panel that contains the two Rotary Switches, there are four toggles that control the Building lights. The one marked VIL controls all of the village and future city building lights.

The Toggles marked DSHOP control the Diesel house lights, C SHOP the car shop lights, and MAINT the maintenance shop lights. These lights can either be on all of the time or on only when being used.

I will be sending an update showing all of the building lights when they are lit. I want to complete the city portion of the layout first that will take some time.

I hope you enjoyed what has been completed so far.

A big thanks to Jim for taking the time to put his update together.

It’s always good to see a layout morph from a tangle of wires and plastercast to a scenic railroad scene (His first post is here).

And don’t forget the Beginner’s Guide is here if today is the day leap out of your armchair and start planning your masterpiece.