Gary’s been in touch and he’s been busy with his HO scale signals:

It has been a while since you have heard anything from me; actually, since last December when I found out that I was going to need spinal fusion surgery on the cervical spine in my neck.

The surgeon has told me I could now do things at my desk. So, with that I thought about what I could do with my model railroad layout, which has been sitting idle for the past 8 months.

As you know my layout is a smaller model of the PRR Sunnyside Yards in Queens, New York. It is not exact but has the three main features of SunnySide which are the Passenger Yard, Commissary Building area and Engine yard. I have a double track main line running around the outside of the layout. 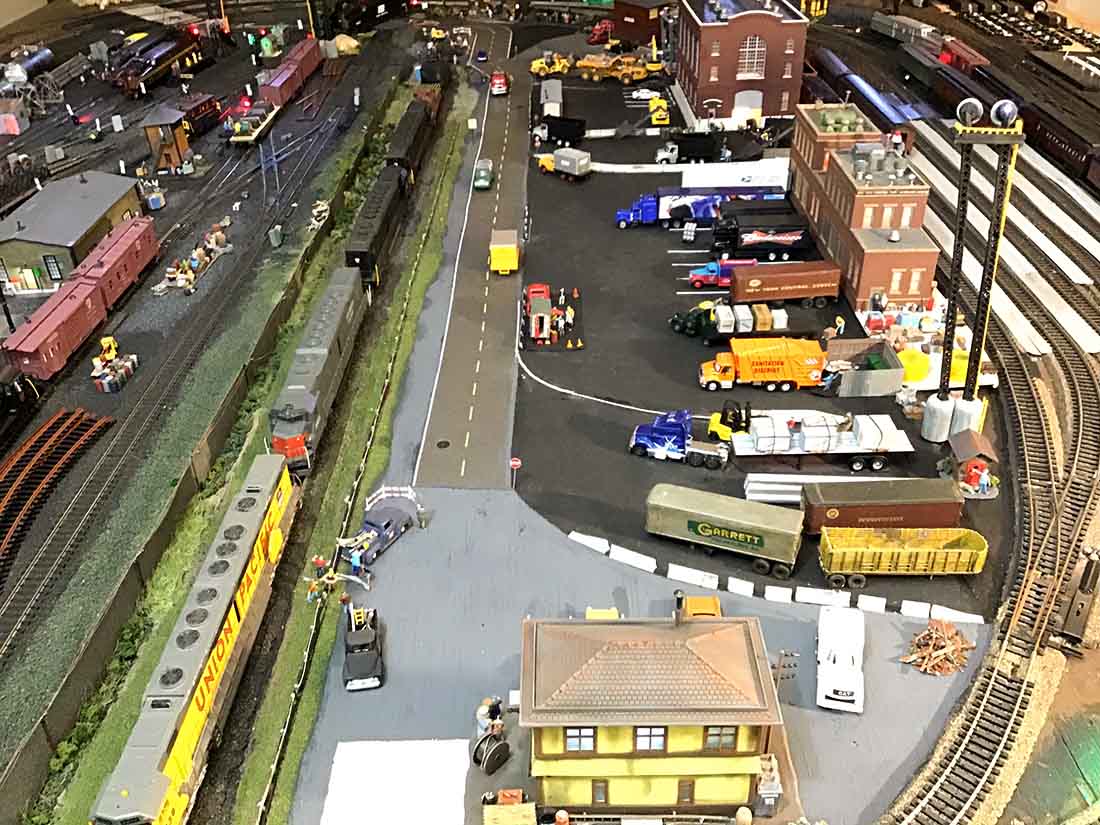 Being that my theme was the PRR, I have wanted to install PRR Main Line signals; see below for what the real signals look like.

It took me awhile to find them; the signals were hard to come by and expensive. I thought now would be a good time to start since I was limited to how much I could move around and going under the layout was out.

I decided that I would build a prototype signal first to make sure I was going to be able to do it because of the number of LEDs and wires that were going to be needed in a small area. I purchased broken signal bridges on EBAY cheap and will kit-bash the signal bridges. 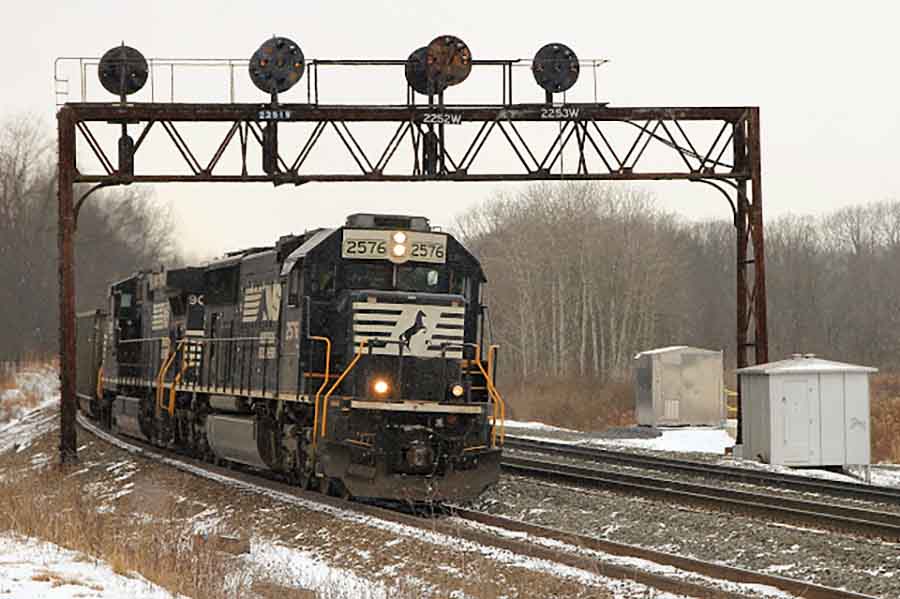 Signals and block power will be manually controlled at the command station through toggle switches. (I know that there are companies that have the newer technology for model railroads for doing all of this very easily, but what fun is that).

My goal was to make one working prototype of the signal.

Here is what I did. 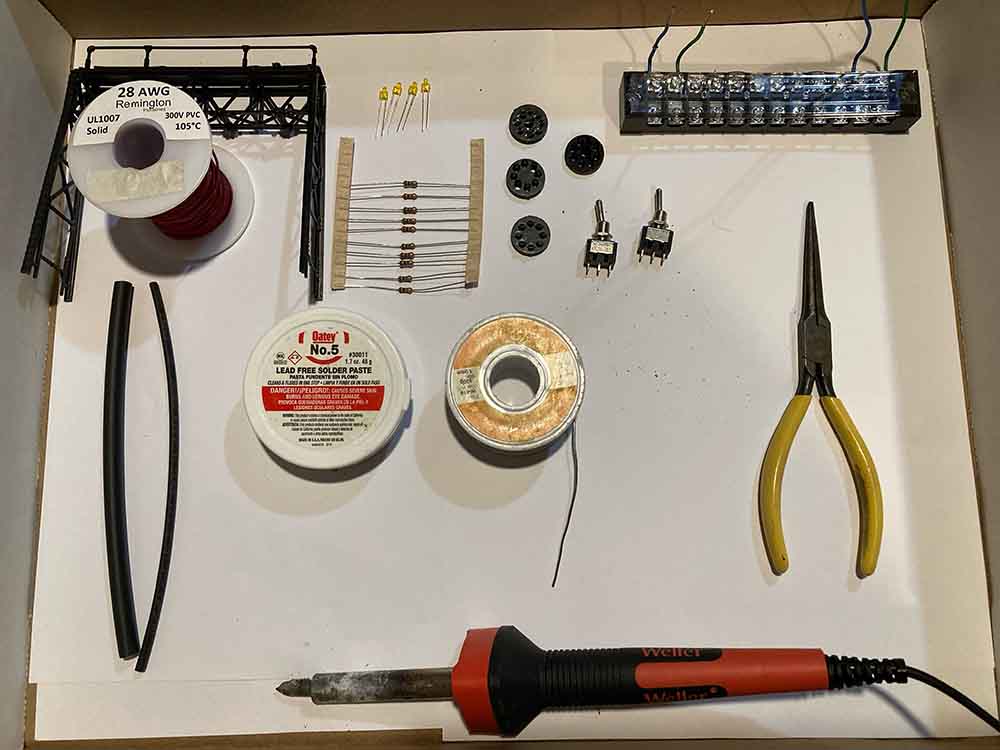 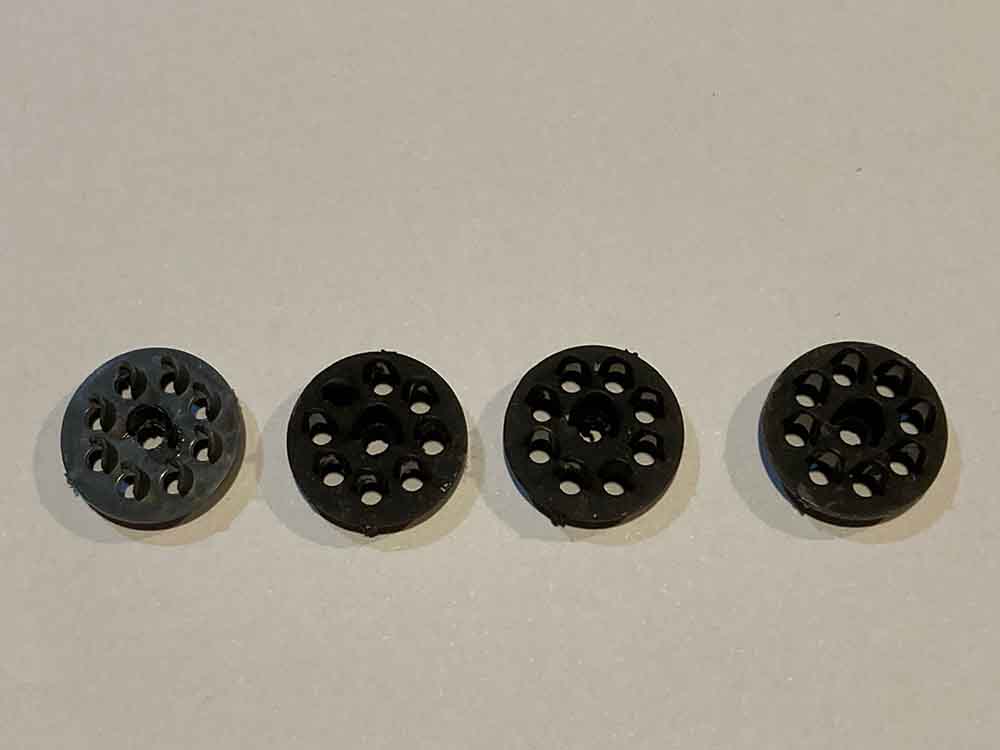 The challenge is to limit the number of wires that will have to run from the signal plate down to under the layout to be connected to the electrical power for lighting.

I decided to use solid 28 AWG gauge wire, very thin but still solid.

I purchased Baltimore and Ohio HO scale signal plates from a company called International Hobby Corp and had to modify the signal faces to resemble PRR signal faces.

The openings in the signal plates were enlarged to fit 2mm LEDs and I had to add an additional hole for the center light.

A lot of time was spent experimenting with the resistors sizes because I wanted to limit the intensity of the light. I did not want the LEDs to be very bright like some of the LEDs I first used in working on the layout.

I started attaching the LEDs to the signal plates. Pictures 3, 4 and 5 show what parts are going to be assembled. 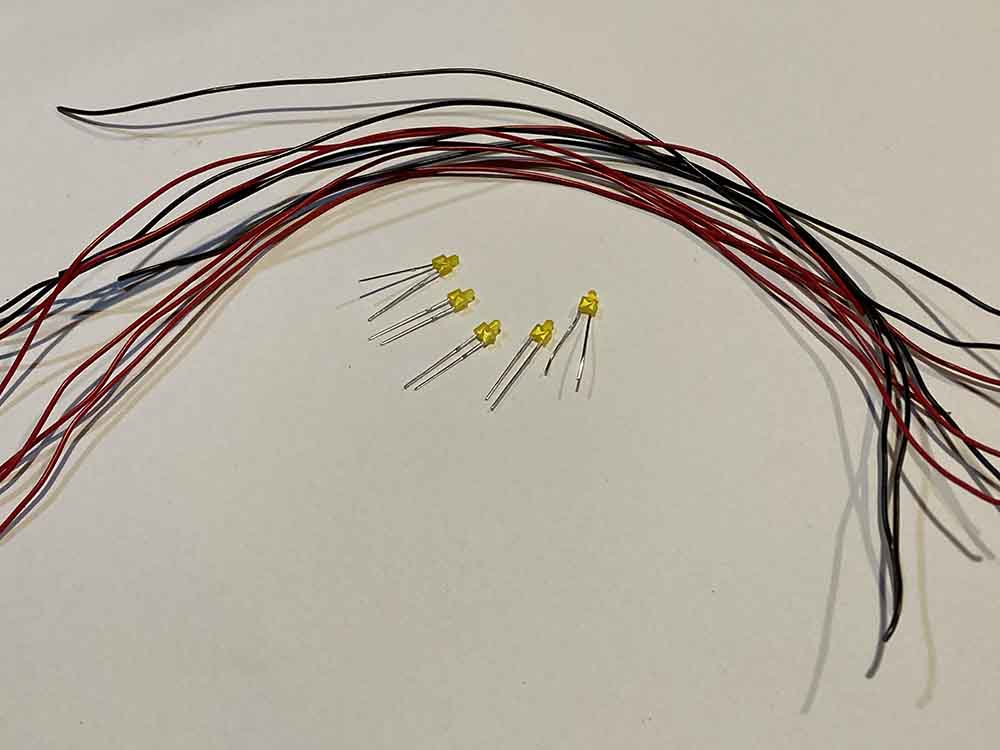 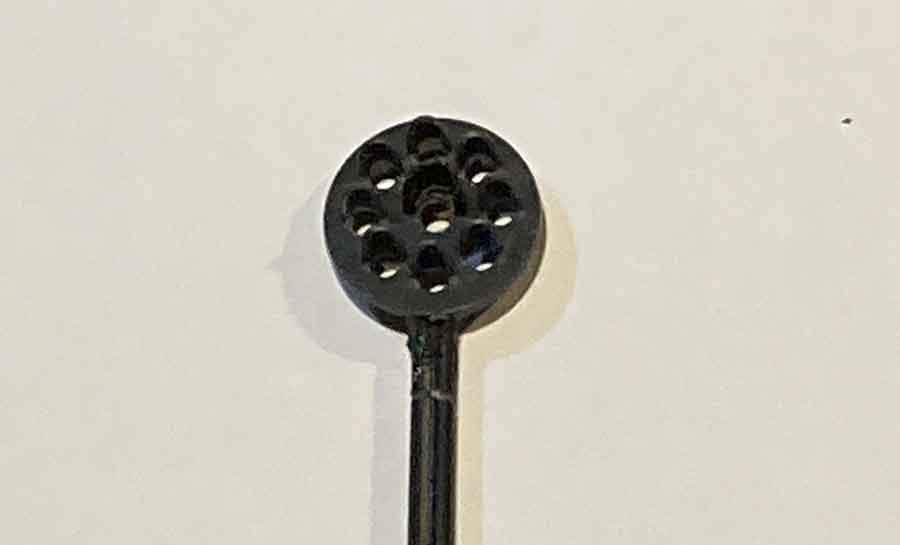 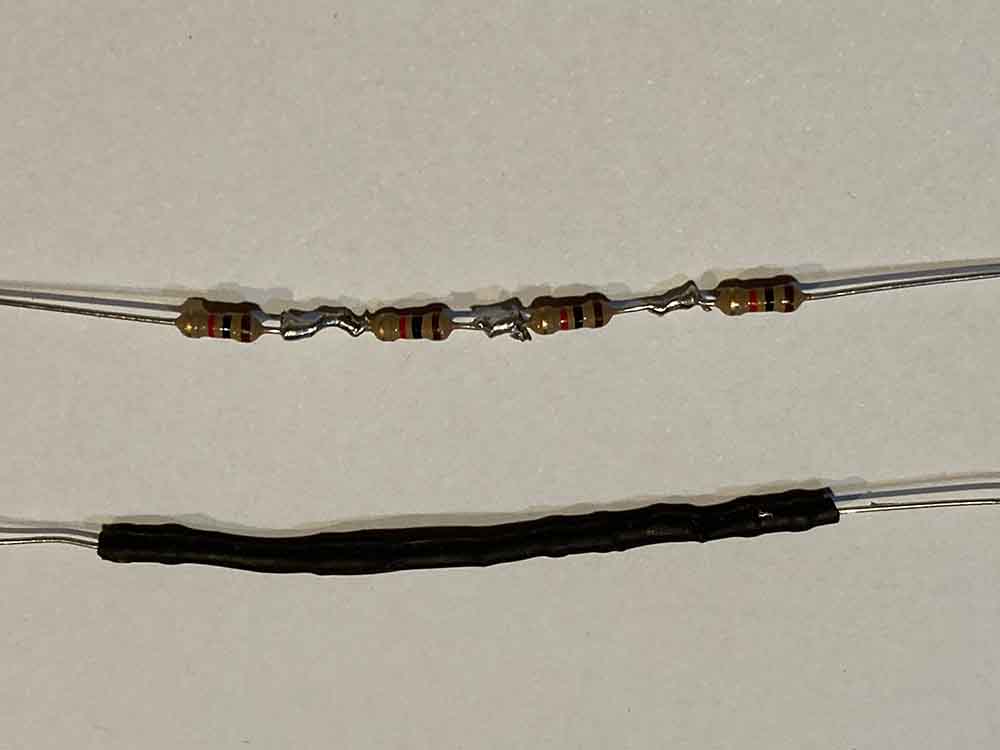 I had many 1K Ohms so I decided to use them and put them in series. I thought that 4K would be enough to evenly dim the yellow LEDs enough so they all matched in intensity but I had to use 8K for the two LEDs around the center LED which were in series and actually 12K for the center LED, which was a stand-alone LED.

Picture 6 shows what the back of the signals looks like when each of the LEDs is installed with its power connector wire and common connector wire coming out of 5 LEDs. Pictures 7 & 8 were the testing to make sure everything to this point was working with my HO scale signals: 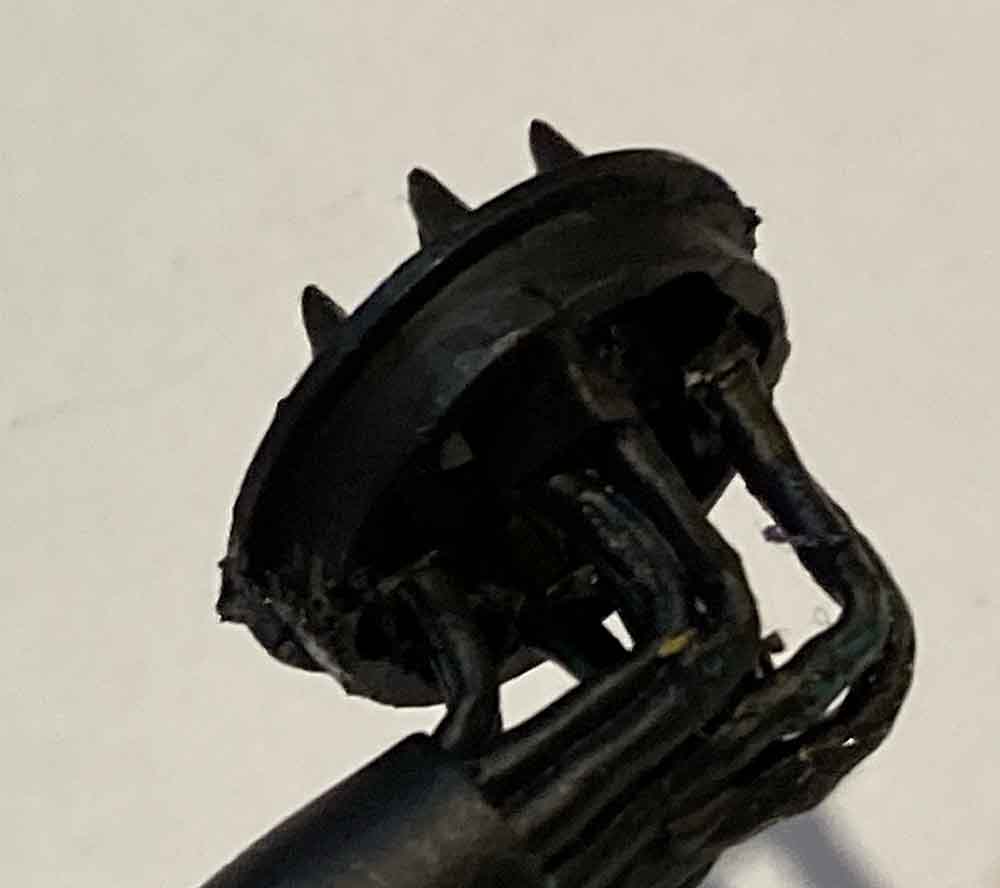 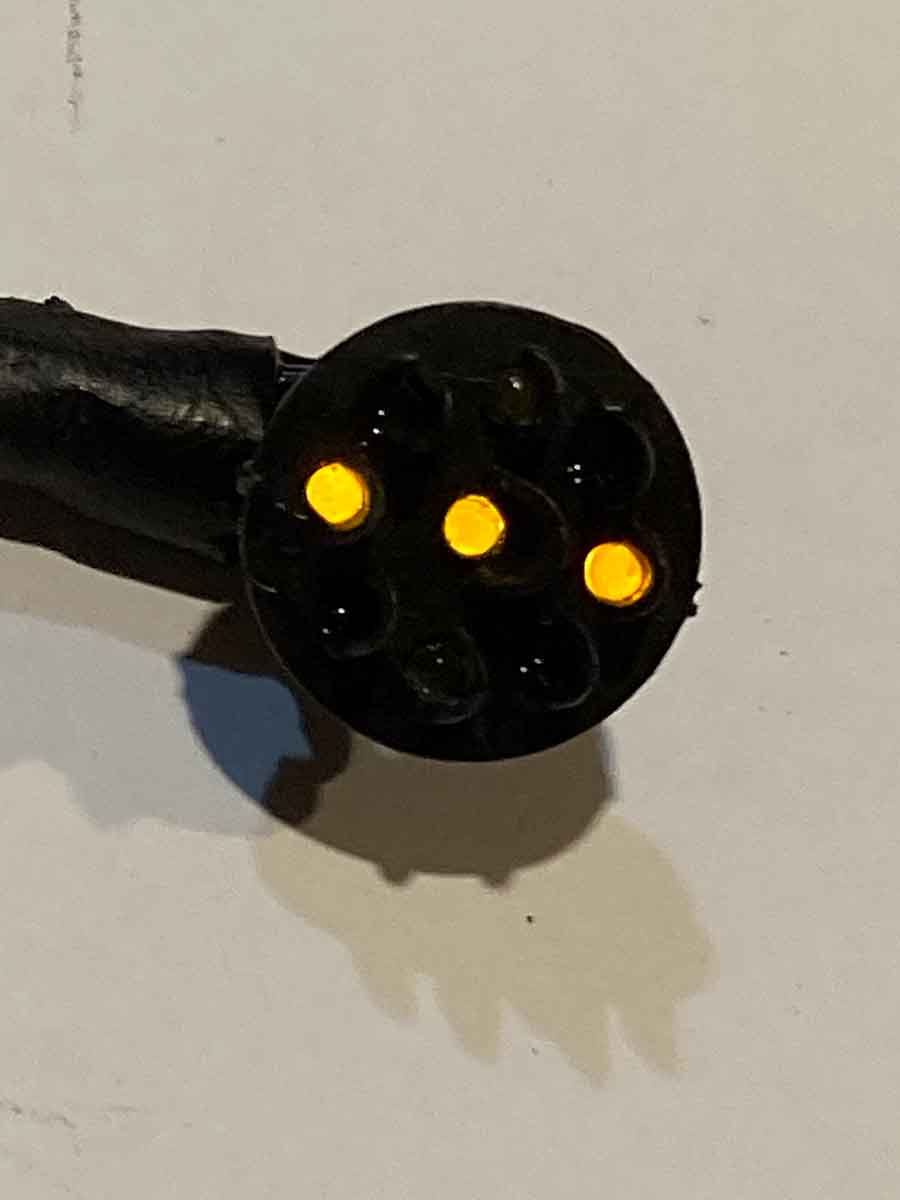 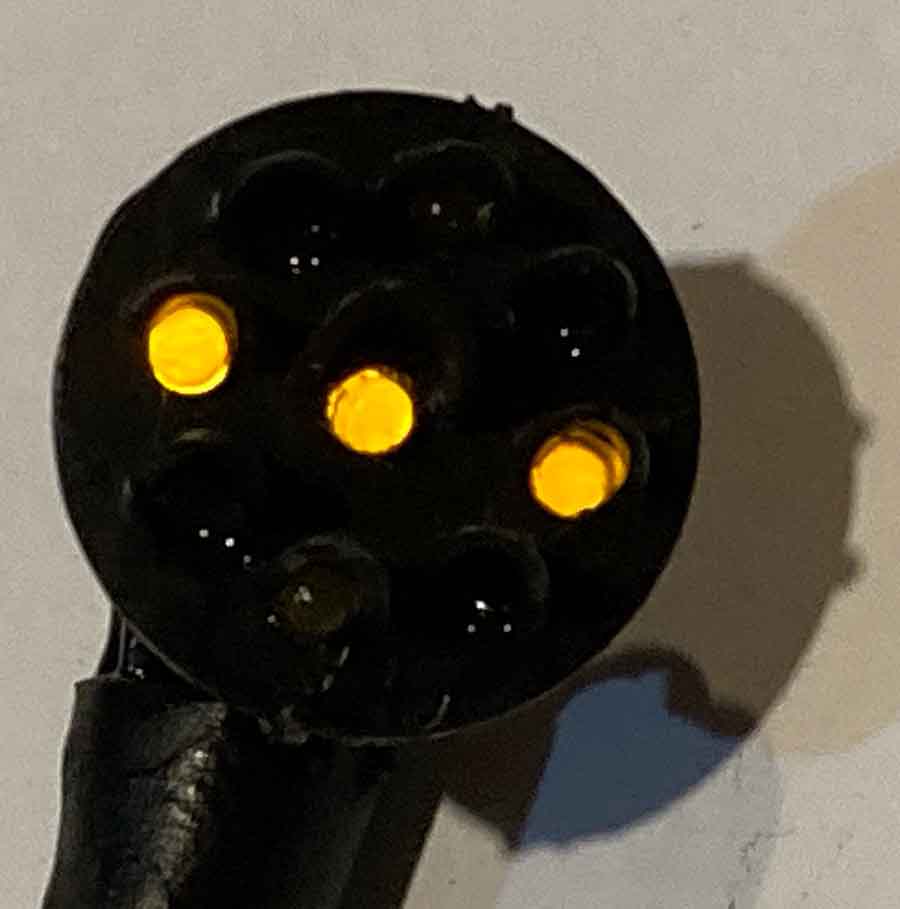 Next, I had the figure out how to reduce the number of wires that would run down to under the layout.

Now the number of wires running down have been reduced from 10 to 6.

The remaining six positions on the terminal block will be for the second signal for track 2 of the main line.

At this time, I have only completed building this one signal. It looks very sloppy because I had to retest the lighting with different resistor strengths to get the right brightness for the LEDs.

Picture 9 shows what the signal looks like when all assembled. I have labeled and numbered the wires so that I know which ones to connect to the proper positions on the terminal block. I also have to add additional black heat shrink to cover the wires running down the signal bridge. 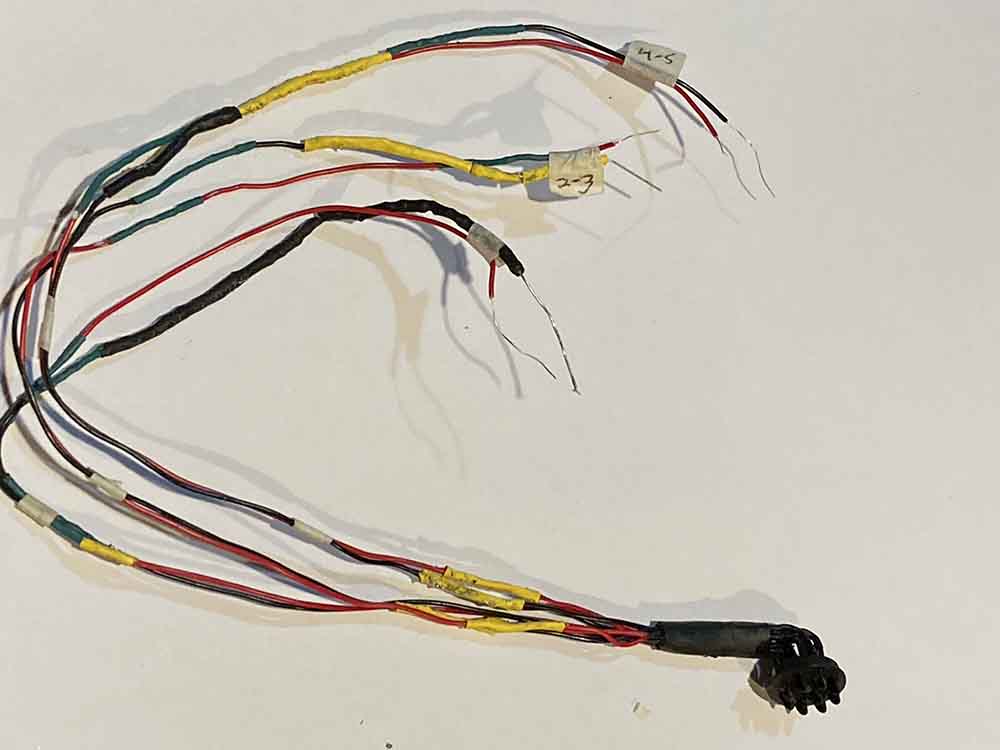 The final test of the signal was with the power from the A/C control box. Picture 10 & 11 shows a working signal ready to be mounted and installed on the signal bridge, Picture 12. 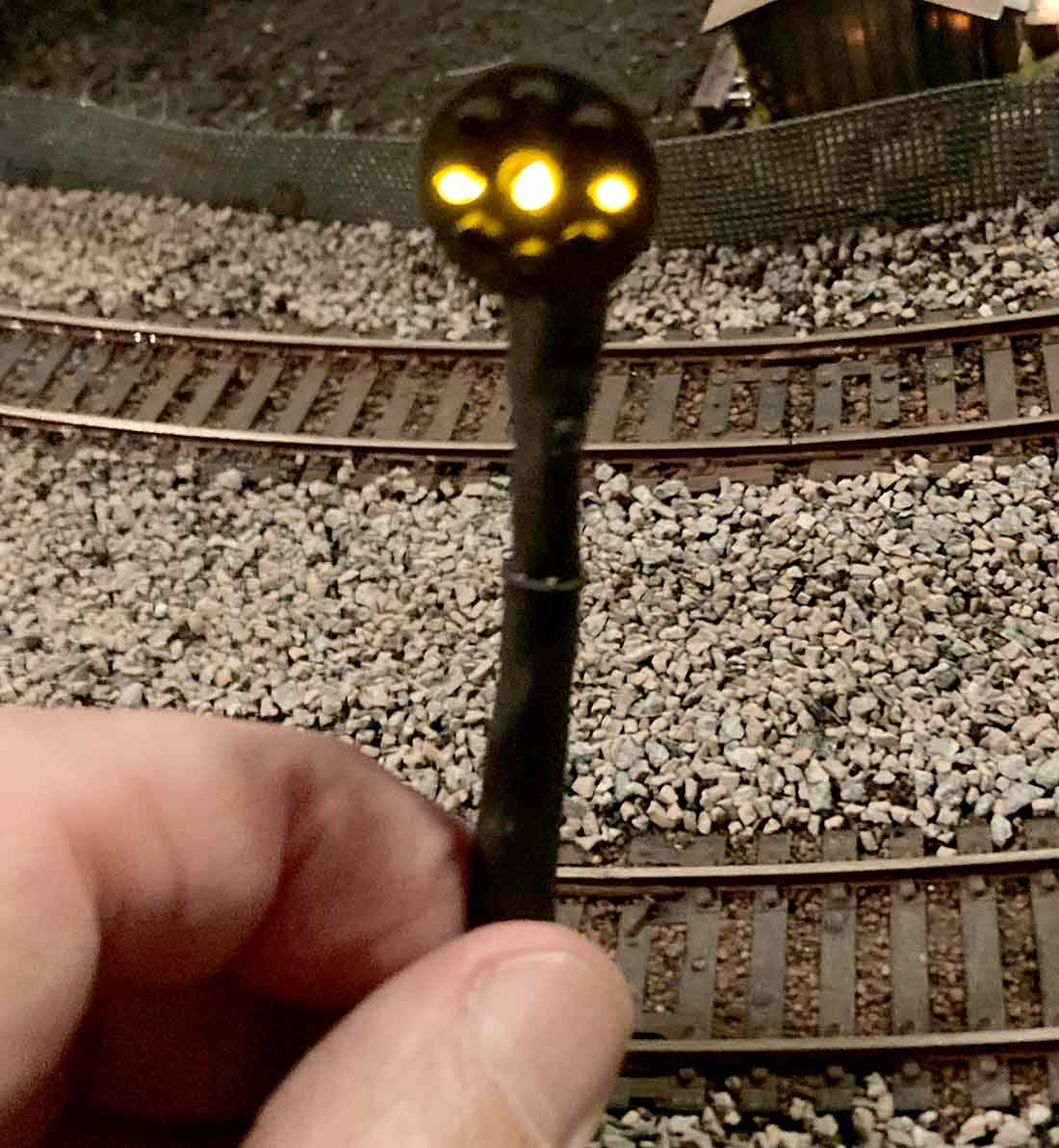 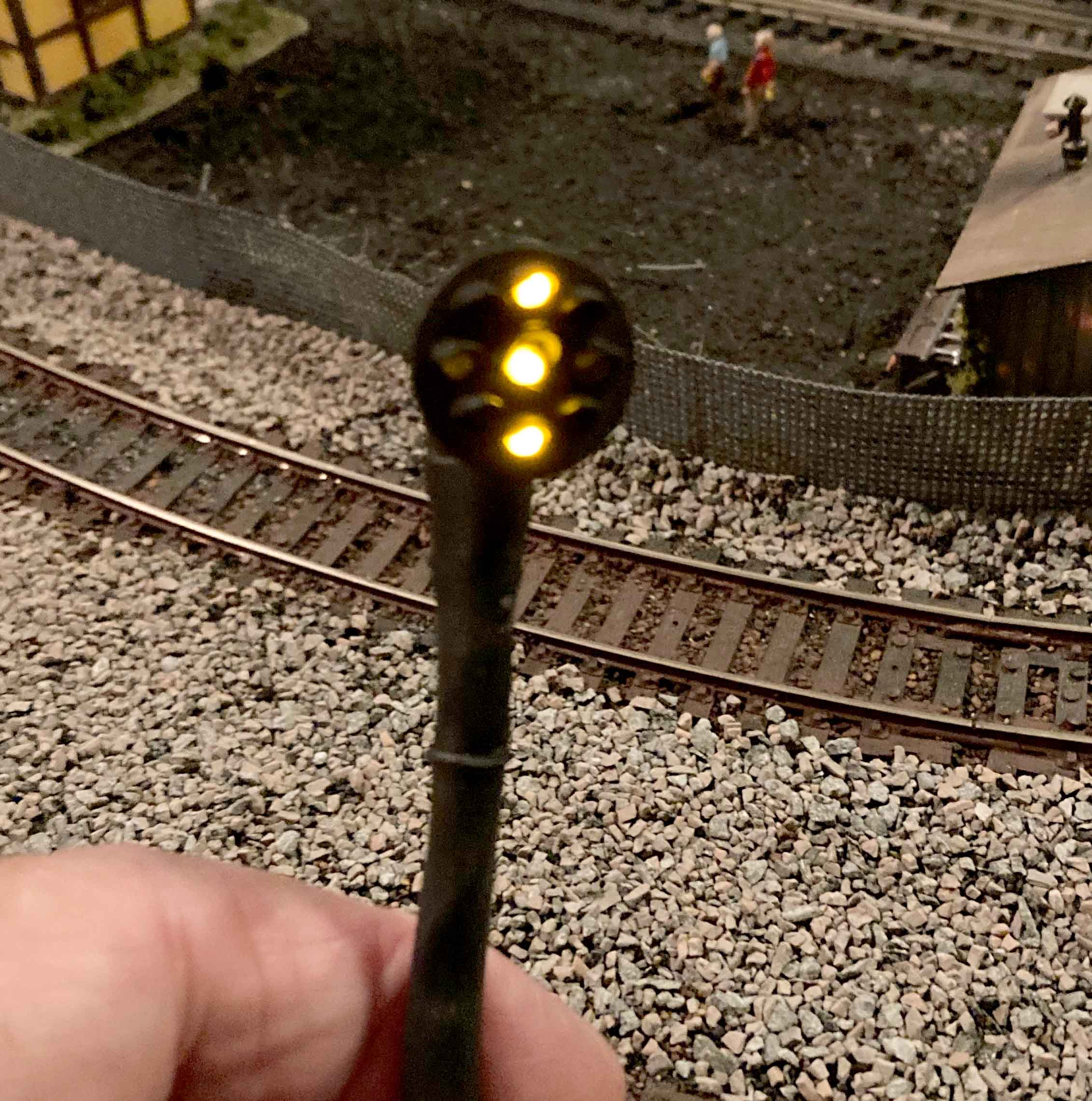 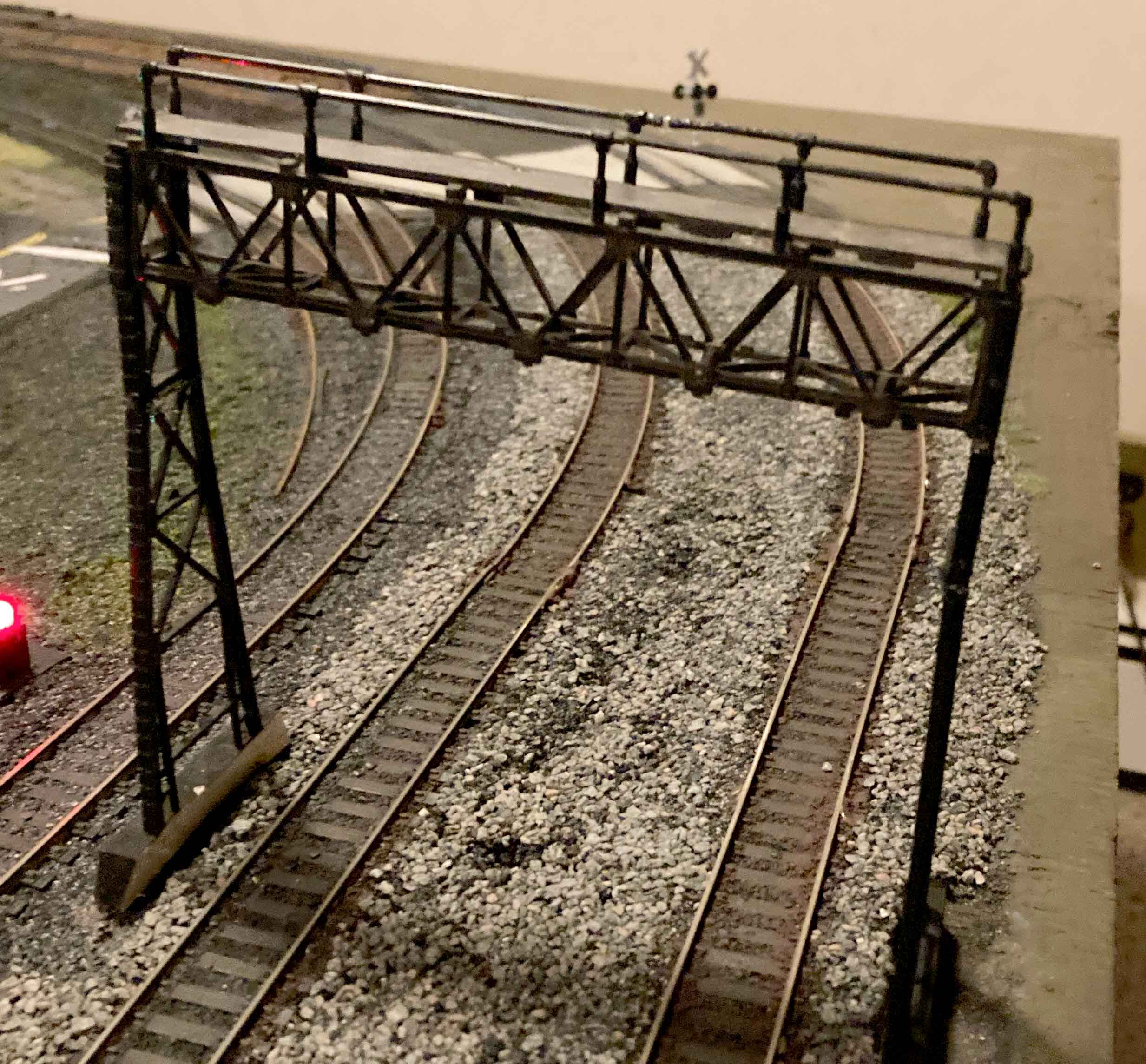 What I have remaining to do for this first main line signal bridge:

Build two more working signal with cleaner and neater wiring for main line tracks 1 and 2 for the east bound traffic.

Build two dummy signals for the west bound traffic; although on my layout there will be no trains running in that direction so the signals will always be in a STOP position.

Run all of the signal wires down the signal bridge to under the layout to connect to the power supply coming from the terminal block.

Send you a video of the finished project.

Build the remaining three signal bridges for the other sides of the layout. I have not decided whether to incorporate blocks of the remaining sides. If I do not put blocks on those tracks, the signal will just be dummy signals always lighted in one position.

What I learned and what changes I will make in building the remaining signals:

– THIS WILL TAKE A LONG TIME.
– instead of soldering 1K Ohm resistors together, I will use 5k and 3k Ohm resistors.
– if I make the holes a little bigger in the signal plates, I can use 3mm LEDs that might reduce the size the resistors I need and maybe reduce the number I need.

I will keep you posted when I have the first main line signal bridge installed and working.

Keep up the great work with your site. Its always great to see an email from you each morning. The work your members do is incredible.

A big thanks to Gary for sharing his HO scale signals missive.

I do enjoy seeing how you all come up with inventions and solutions.

And then there’s Henry’s Wiring signals for your model railroad.

Andrew’s How to make model railroad signals post is useful too.

What’s more, Gary has done a solid job of documenting his layout from start to finish.

I know I’m always banging on about making a start, but a close second to that it to pick a theme for your layout.

A theme really does ‘glue’ a layout together visually, and I think Gary’s is another fine example of that – he had a clear theme in mind before he lifted a finger and it’s really paying off. 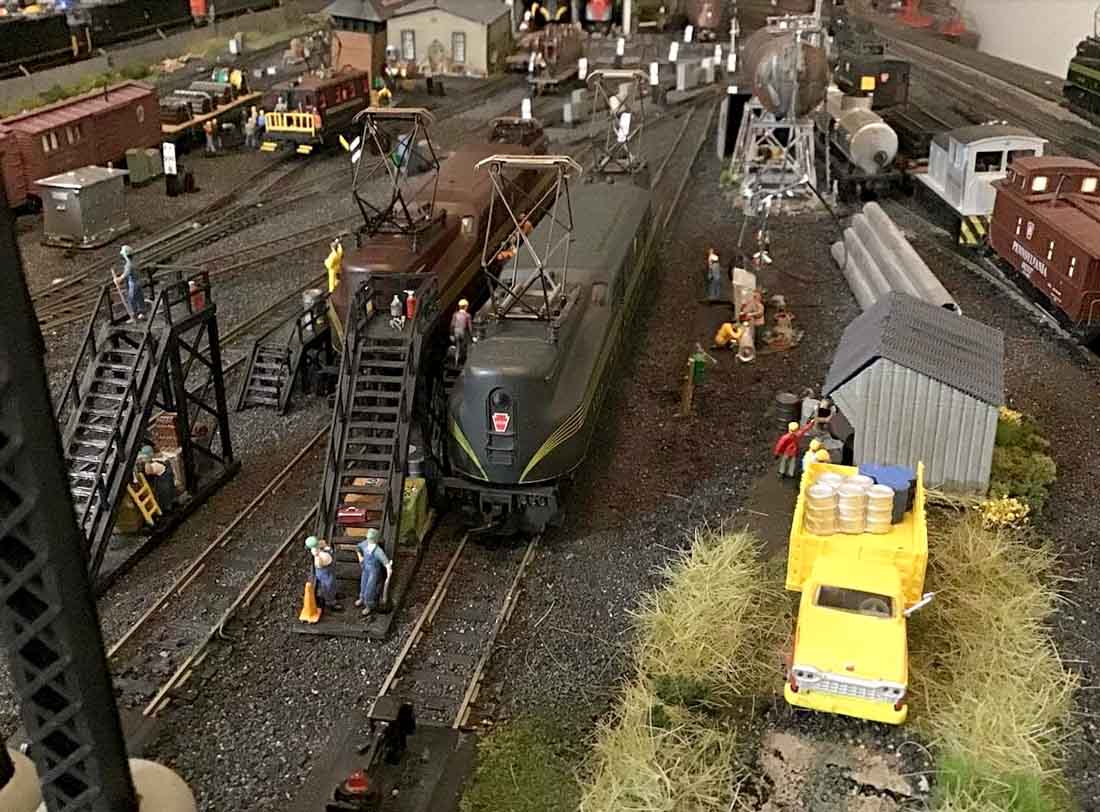 Here’s his journey so far: